We awoke about 5 a.m. Saturday morning after a few too many drinks the night before at Dee's and the Ely Steakhouse. We got everything in order for a 6 a.m. departure from our outfitter, Piragis. We had been there the night before to get all details ironed out, so all we had to do Saturday morning was load up the van for the lift to Entry Point 16.

I was a two-time visitor to the Boundary Waters, once as a kid and once about 7 years ago with another member of the group, Chris. We went in on East Bearskin Lake off the Gunflint Trail.

The other four had never been to the Boundary Waters: Mike, BJ, Troy and Luke, a real newbie in that he doesn't even like to camp. But we were proud of him for joining us and putting his fears aside. Mike was meeting 4 members of the group for the first time.

We loaded up the Piragis van and set off, reaching the entry point by about 7. We unloaded and set off on the initial portage, giving us our first assessment of the weight of our gear. I teamed with Luke. Chris teamed with Troy. BJ and Mike teamed up. We set off without incident up the Moose River.

Our goal was to paddle through to Lac La Croix (est. paddle/portage time: 7 hours) and target the three camp sites on Boulder Bay for a three-night basecamp. I was worried -- given the busy route and the busy time of year -- we would find all of them occupied. I knew we'd be pretty bushed by the time we got there and didn't want to paddle up the lake to search for a site.

My canoe settled in behind the other two quickly, a theme for the trip. I had never paddled from the stern before and had early trouble keeping us straight. Not a great start for Luke on his first trip. The other two canoes were cruising and ours was falling back, with our zigging creating more work for us.

Our first ordeal victimized Luke, of course. He got stuck in the muck as we traversed a beaver dam on the river before Nina Moose. If he pulled one foot out, the other (now with all the weight) sank deeper. We laughed but also worried about how he was feeling about his decision to brave the outdoors. After an announcement that "I could be golfing right now!" (the only one of the trip!) he freed both feet and we bypassed the dam.

The water levels were noticeably low, and once we reached the second stretch of the Moose River after Nina Moose we found ourselves beaching constantly. With us trying to cruise up to LLC to beat the traffic to the camp sites on Boulder Bay we were worrying we were losing time getting out of the canoe to walk it through ankle-deep water.

We stayed within site of the other two until I got my bearings on Lake Agnes and we caught up. Felt nice to take a straight line from then on in.

Agnes was very calm (as was Nina Moose) so we cut a very nice, fast line. We were getting pretty worn out, so I announced to the group on the north end of Agnes that we were 95 percent of the way there.

We decided on the two-portage route into LLC after researching on the BWCA site and taking welcome advice that it would be faster. Pretty hilly but we got through. Once we put in at Boulder Bay it was time to strain our eyes to see if we could spot anyone at the campsite directly across the water, the more westerly of the two campsites on the south end of Boulder Bay. That was our No. 1 prized camp site, which we read was large and breezy (to keep the bugs at bay).

Chris and Troy's canoe was off the portage landing first and made a bee-line to that site. Luke and I stayed back and watched. When we saw them land the canoe we knew it was empty and the whole group let out a yell. I had refused to let myself believe we'd get our No. 1 camp site. So I was ecstatic.

We cruised across, landed and started setting up camp. Everyone raved about the site, complete with a log table and seating area around a nicely positioned fire grate with a nice rock wind shield. The tents were placed in a huge area under a red pine stand. We could have put 10 tents there. Gorgeous site right where we wanted to be. A great start.

We were targeting 7 hours for the entire trip from the EP to Boulder Bay based off what some kind folk on the message board told us. Chris, our trip planner and map holder, checked the watch: 6 hours on the nose. We felt good about ourselves.

It was about 2 p.m. and it took us maybe 90 minutes to set up tents and get a basic kitchen area set up. We were too tired from the paddle in to think about getting back into the canoes to fish. Besides, we had brought frozen steaks in to thaw during the paddle for our first night's meal so we didn't need fish.

After setting up camp, Mike and I began the hunt for firewood with my campsaw. We found next to nothing in the area near camp. Picked clean. I spotted a white (dead) tree across the bay, which we could walk to through a marsh. Mike and I made our way over there and I realized it was a small white oak -- about the best firewood you could hope to find. Mike and I took turns breaking off branches and sawing when we needed to. We got a lot of long-burning wood from that tree.

But we set up the rods and tried for a little surf to go with our turf. No luck. We got nothing. It was a theme for the trip. No real fishing from camp. Bummer, but we were in Boulder Bay with a lot of great fishing nearby.

The breezy camp site reviews I had read were spot on. We saw no bugs the first night. Troy served as the trip's cook and we cooked up the NY strips in the skilled with some add-water potato mash. It was excellent. We stayed up for a few cocktails and hit the hay, tired from a long paddle/portage in. 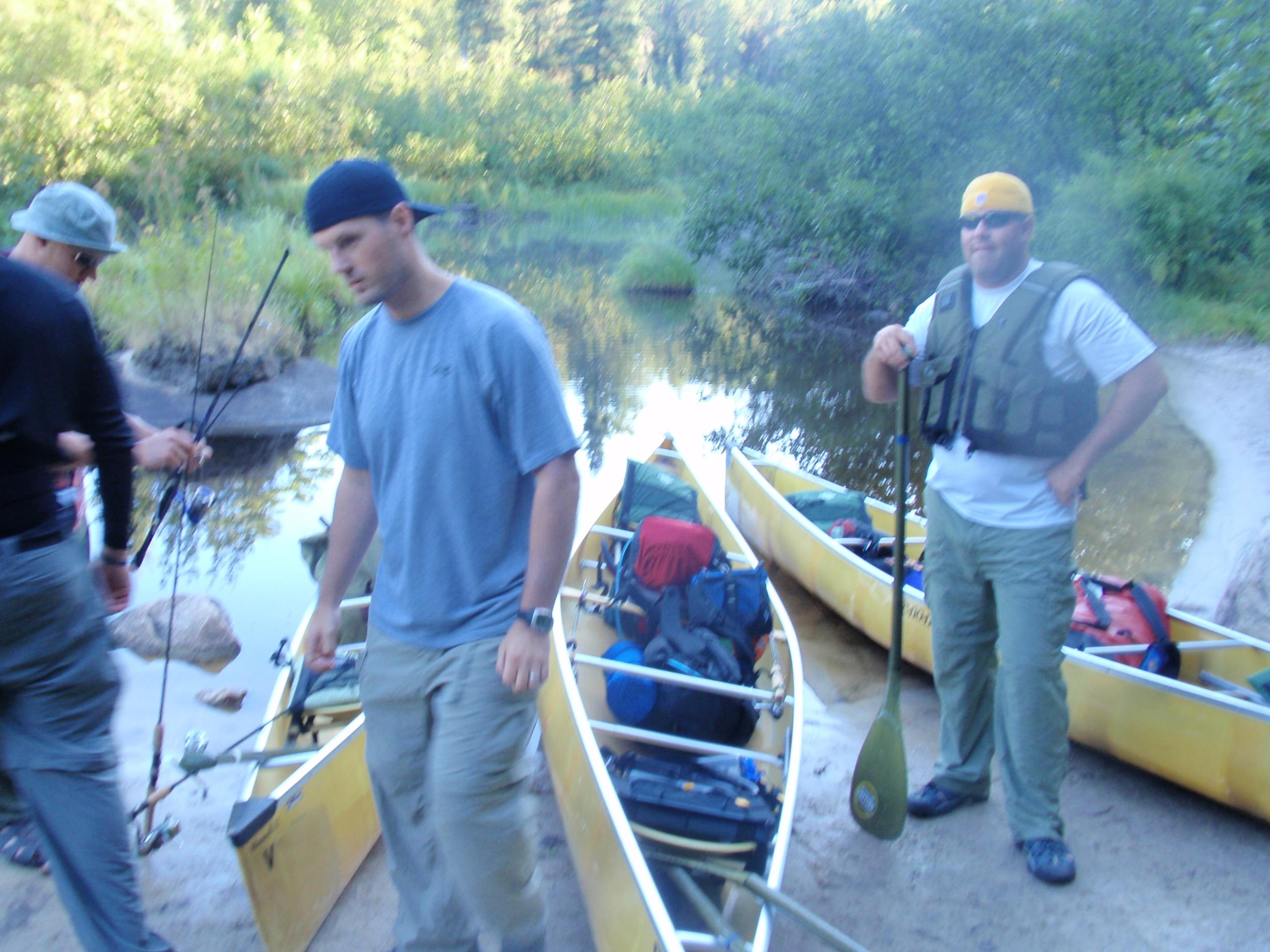 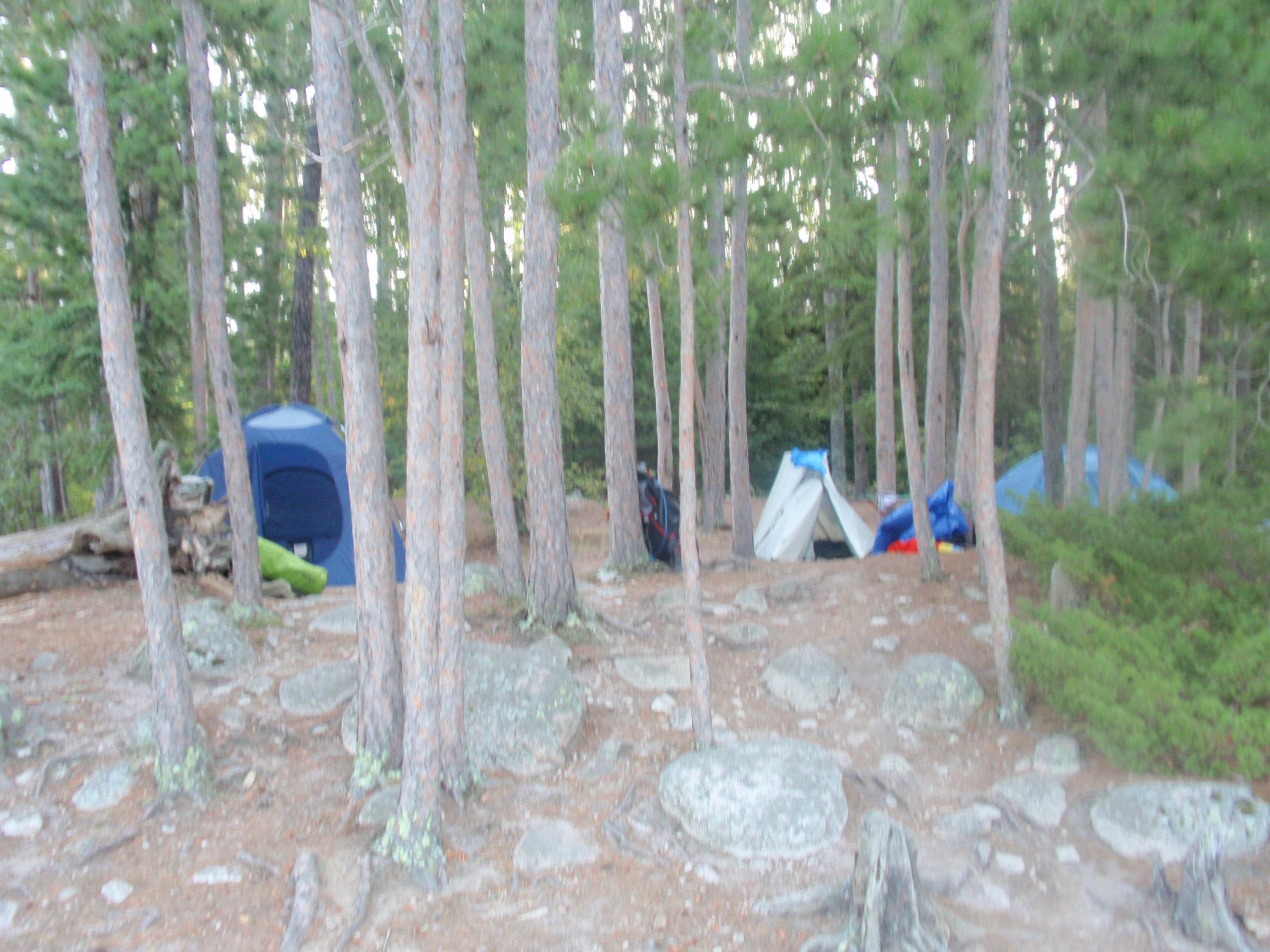