Trip Type: Paddling Canoe
Entry Date: 06/27/2011
Entry Point: Quetico
Exit Point: Quetico
Number of Days: 10
Group Size: 2
Trip Introduction:
Made my 31st trip into Quetico in 2011. I have tried to lead a trip up north around the 4th of July every year since 1979. I missed 1 year when I had to attend my brothers wedding. I turn 58 in October and I made it a point to try and work out a bit more to make the long portages on this trip go easier. Left Bettendorf, IA at 5:00 am and arrived at Scotts Marina on Crane Lake around 3 pm. I ran into Stu Osthoff, editor of Boundary Waters Journal, who was just coming back from guiding a group into Quetico. I have known Stu for years and try to hook up with him every year at Canoecopia in Madison, WI. He is a very knowledgeable guy and has helped me become a better Quetico fisherman. I am a faithful subscriber to BW Journal. My buddy Eugene and I loaded our canoe and gear into Zups jet boat and we headed up to Lac La Croix. I enjoyed visiting with the guys who run the mechanical portages that are part of the tow. We made a short stop at the ranger/customs station and showed passports and were on our way to Zup’s Resort. We were directed to our overnight cabin. We had a few beers and sorted thru our stuff and packed up our gear for our 10 day trip. We had a nice supper and ended up having a few beers and visiting with some ‘Old Timers” who frequented Zups every year to do some walleye and smallie fishing on Lac La Croix and some portage lakes. Hey, I am probably viewed as an old timer … just hard for this guy to accept that. After a good night rest and an early, hearty breakfast… we were off on our tow to Entry Point #43 McAree ( Brewer Rapids) @ 7:15 a.m.
Discuss Trip: View Discussion Thread (4 messages)
Report 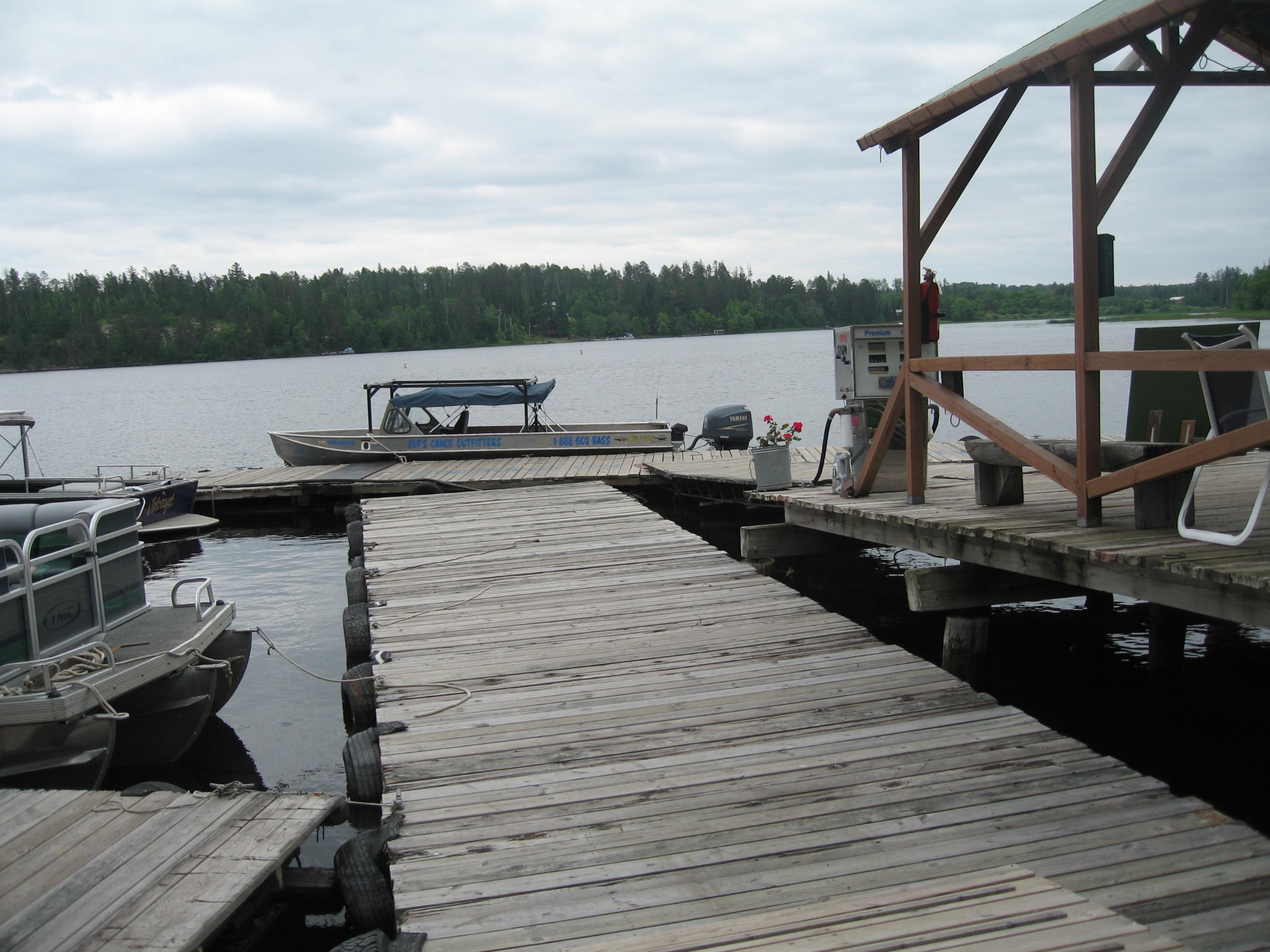 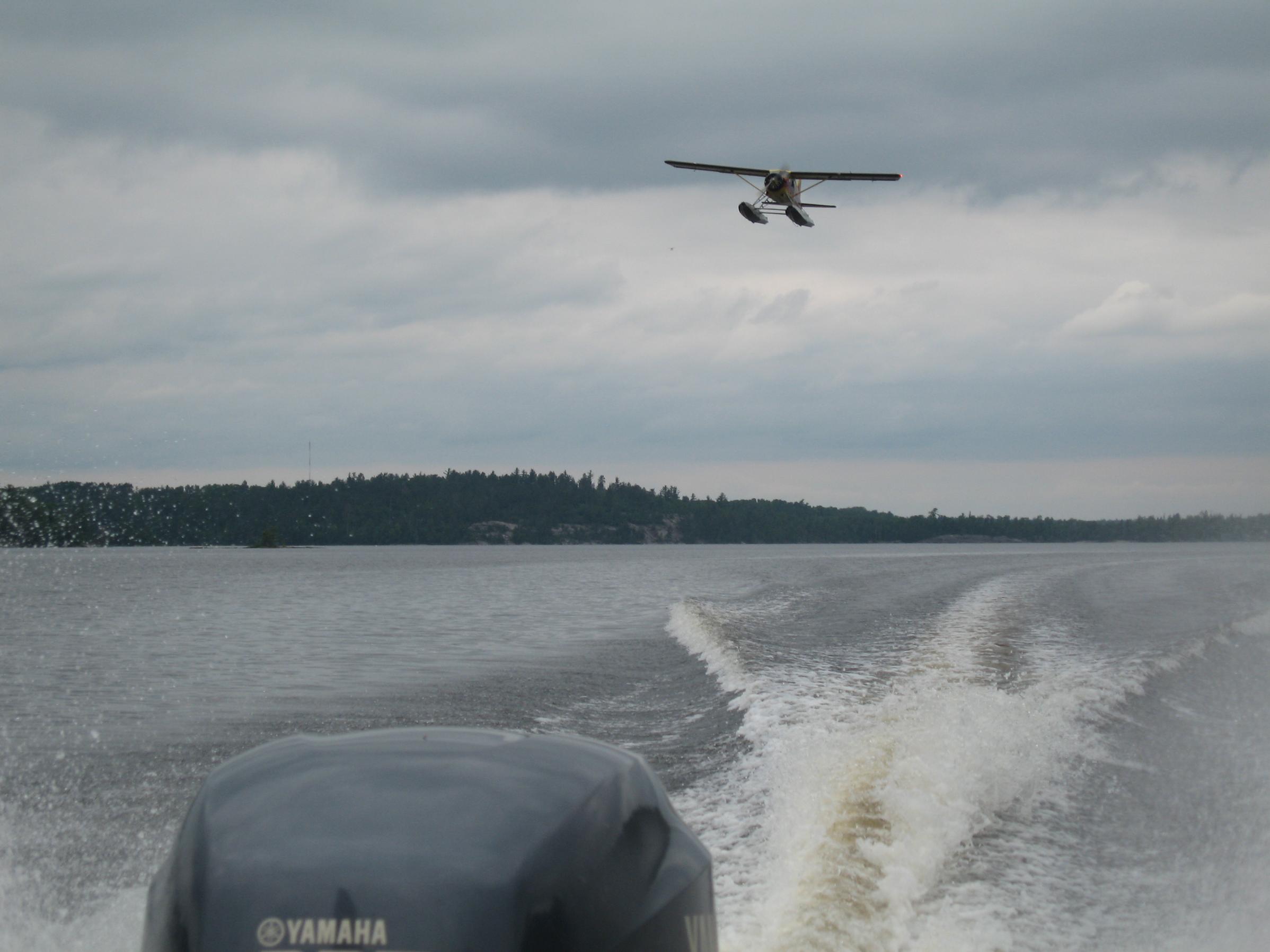 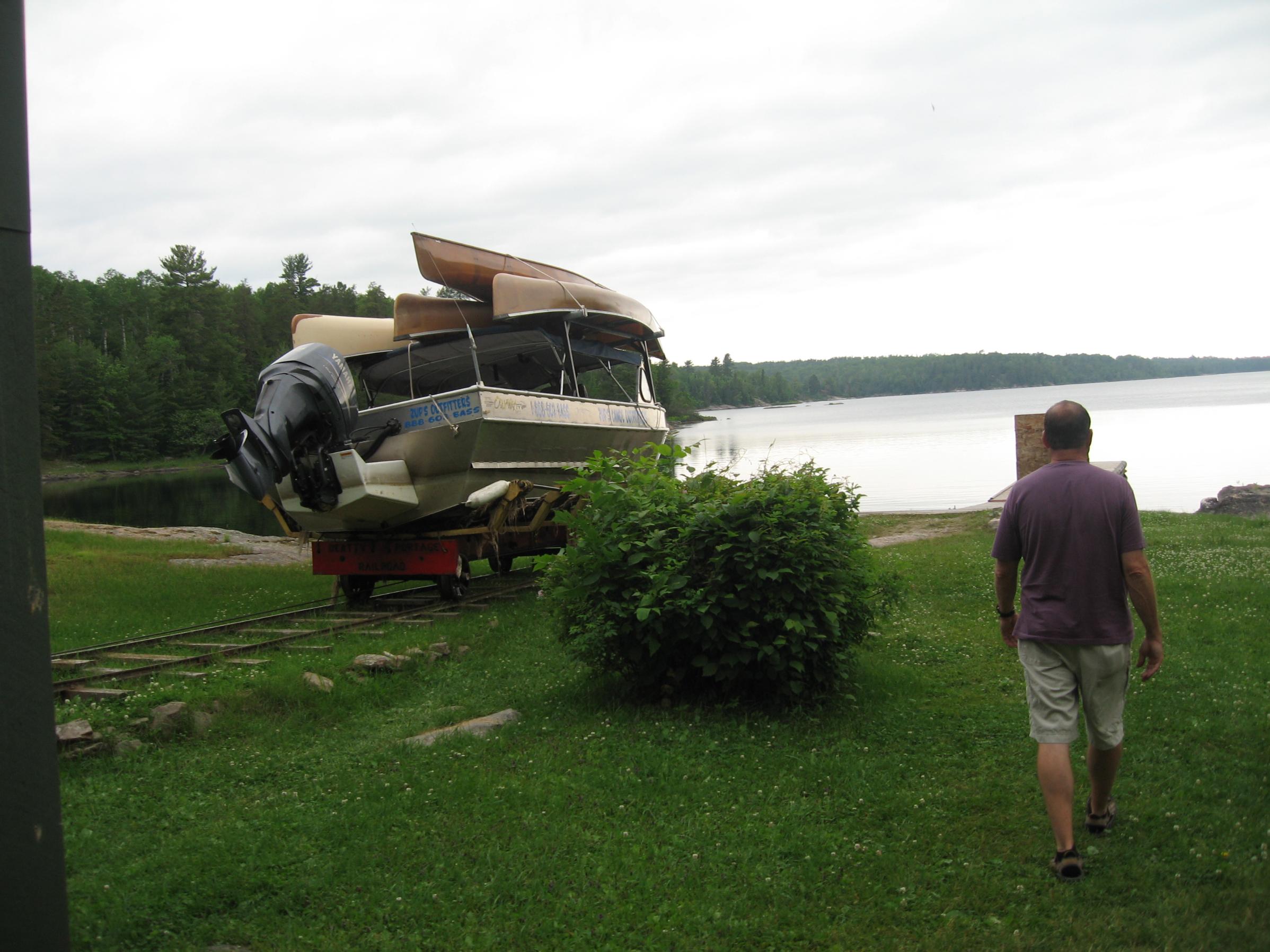 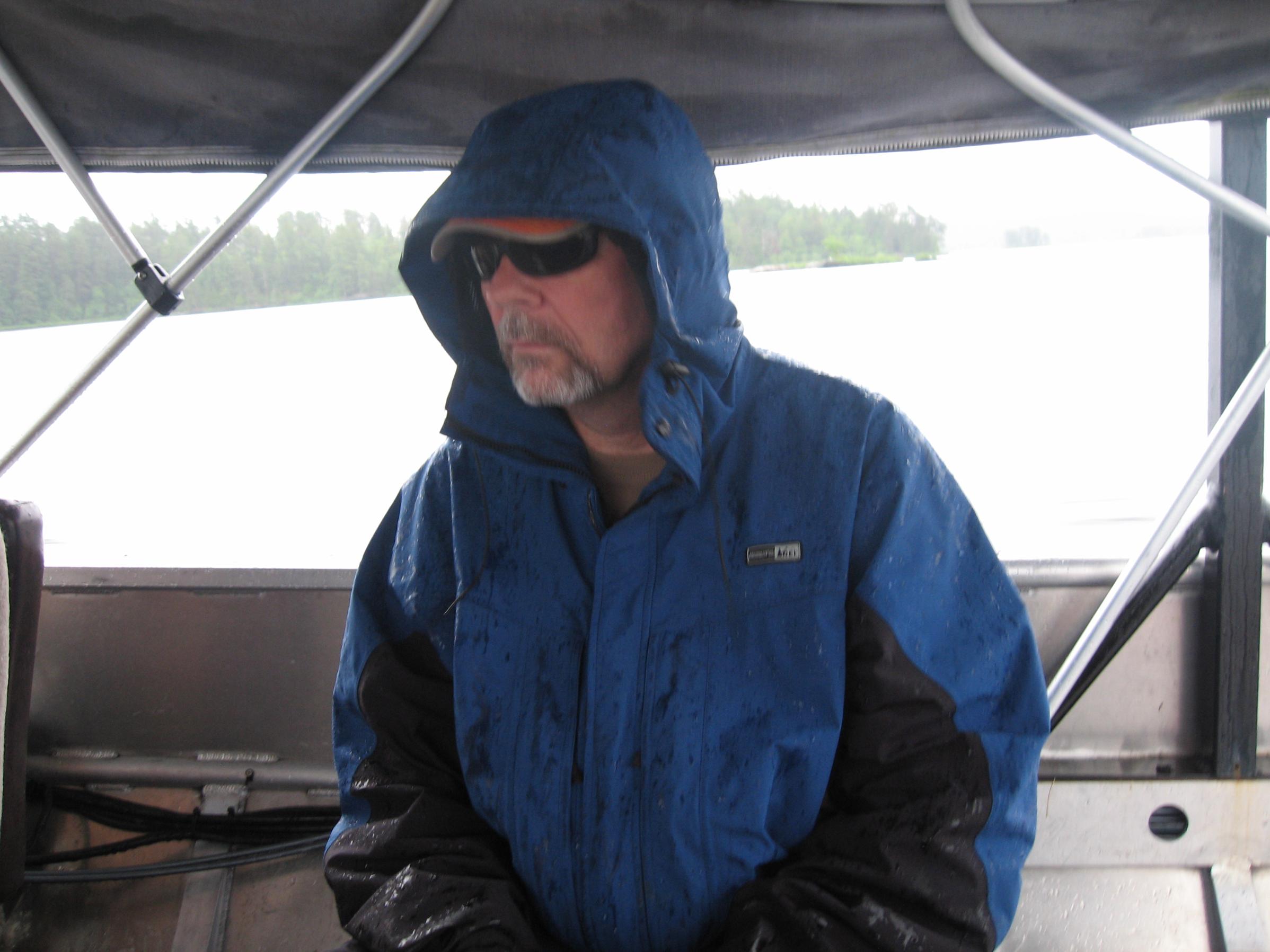 After a good night rest and an early, hearty breakfast… we were off on our tow to Entry Point #43 McAree ( Brewer Rapids) @ 7:15 a.m. There was a light rain.

After a short 32 rod portage into Brewer Lake we paddled a short time and encountered a group of 4 from Indiana who happened to be camping right on the portage into McAree Lake. They were into the 5th day of a seven day trip. These guys had been going to this campsite for over 40 years. They said that they didn’t have to travel far and the fishing was pretty good. One in their group helped us carry our gear over the short portage. On the last load it started to rain and thunder and lightning. Oh boy, did it rain. They invited us to take cover under their big tarp. It rained hard for over 2 hours. When it started to let up … one of their guys asked if we wanted to join them for an early lunch of polish sausage and hot chocolate. We certainly took him up on their offer and enjoyed a nice lunch and some great conversation. After a while, I told them we had a long paddle day ahead of us and we better be on our way. I thanked them for their great “Hoosier” hospitality.

By the time we got to the short portage into Pond Lake it had stopped raining. The 220 rod ‘Up Hill” portage into Gratton Lake was tough especially as it was a bit slippery after the big rainstorm. Heard there was some descent smallie and largemouth fishing in Pond and Gratton but fishing was not in the cards for Day 1, we just wanted to get to Darky Lake to make camp for the 1st night.

Worked our way through Wicksteed and finally made it past the 48 rod portage into Darky Lake. The “5 –star Hilton island campsite at the entrance to where you can portage up into William Lake was taken so we settled in for the 4 –star elevated campsite about a ½ mile west. It was a nice site with a great panoramic view on 3 sides. Set up camp and made a quick grilled cheeseburger meal . After a few sips of Dewars Scotch, it was time to call it a day. 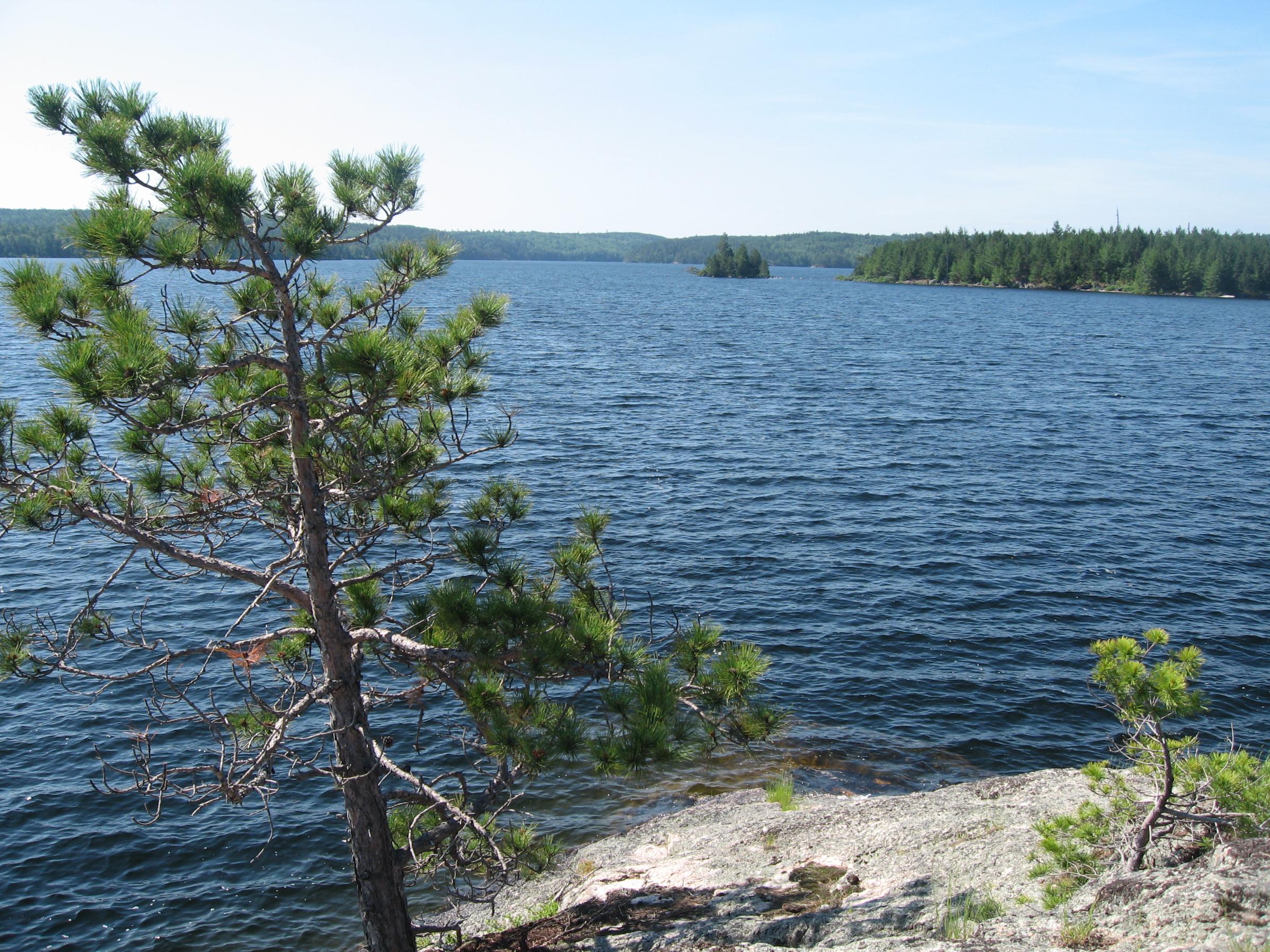 There was a nice ‘walleye chop” going on the water so we rigged up our rods and went wally fishing. 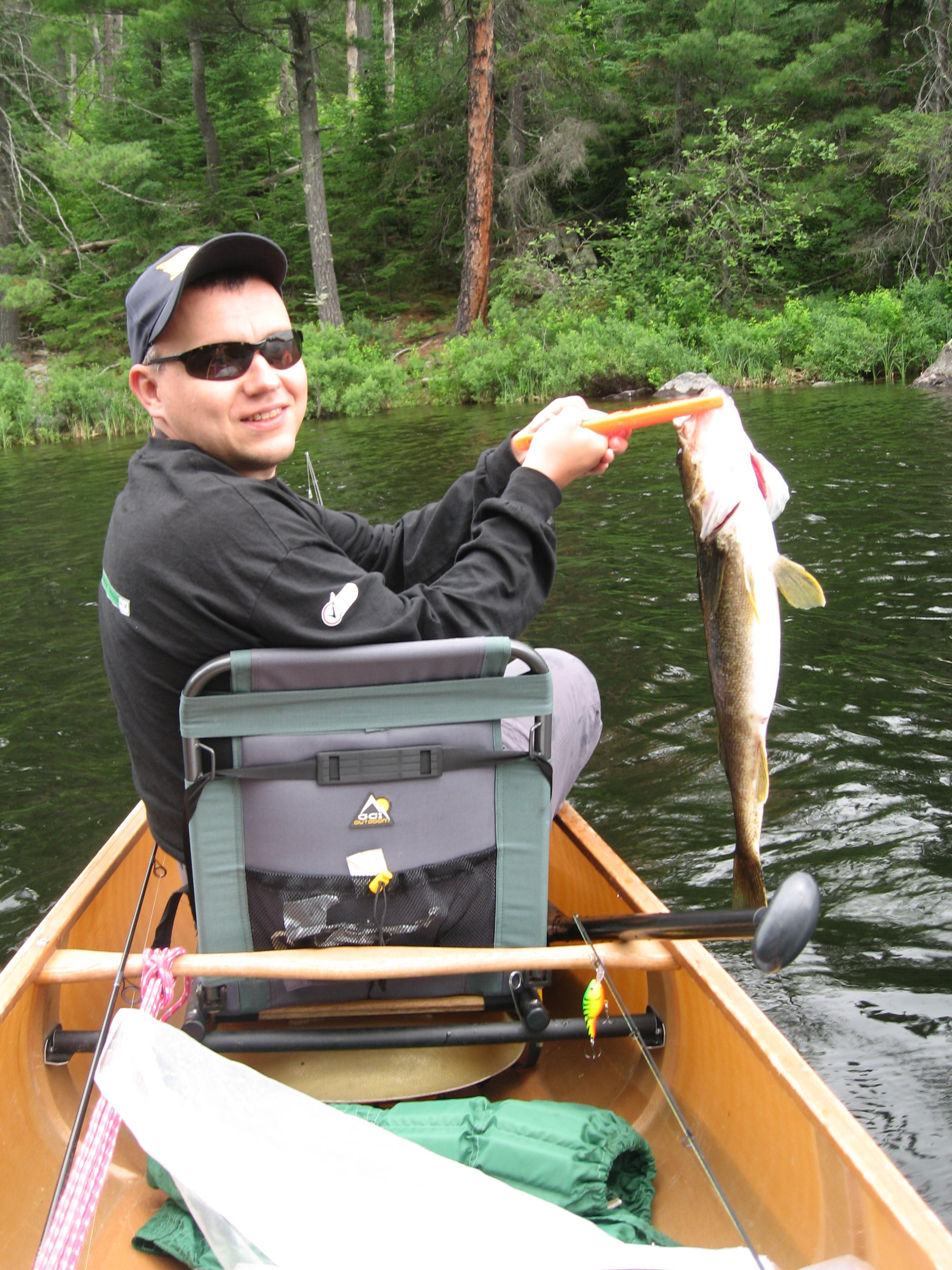 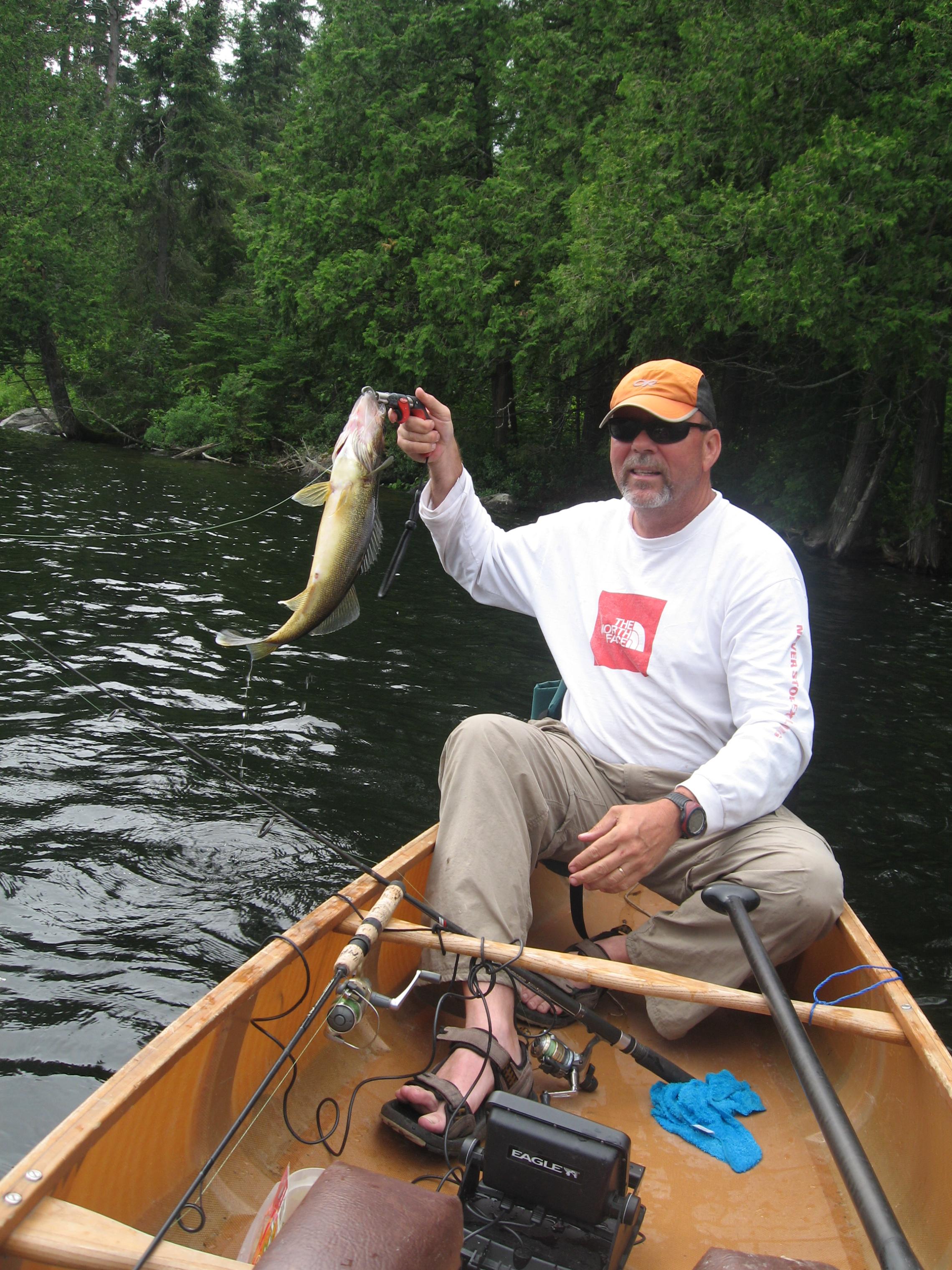 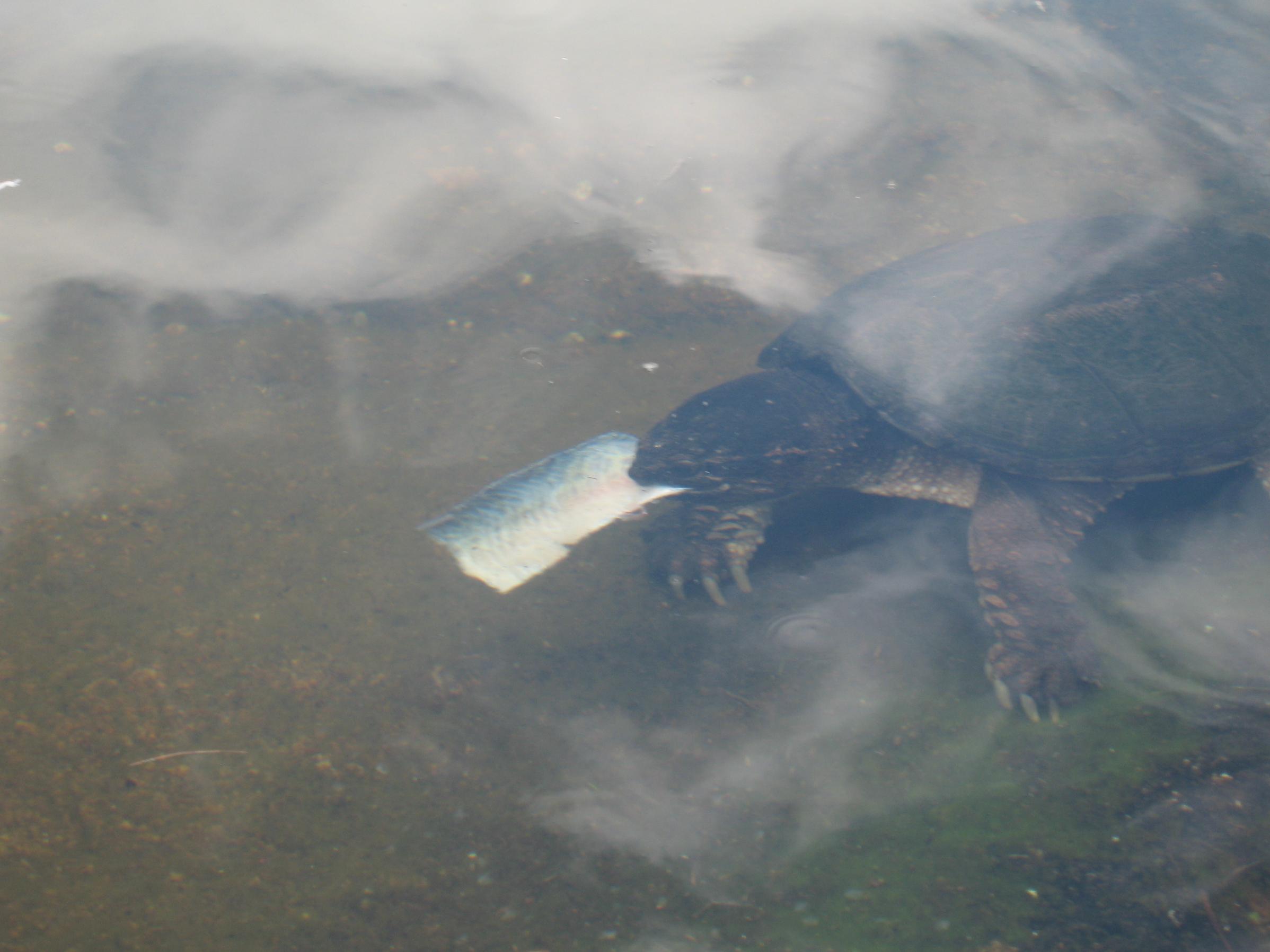 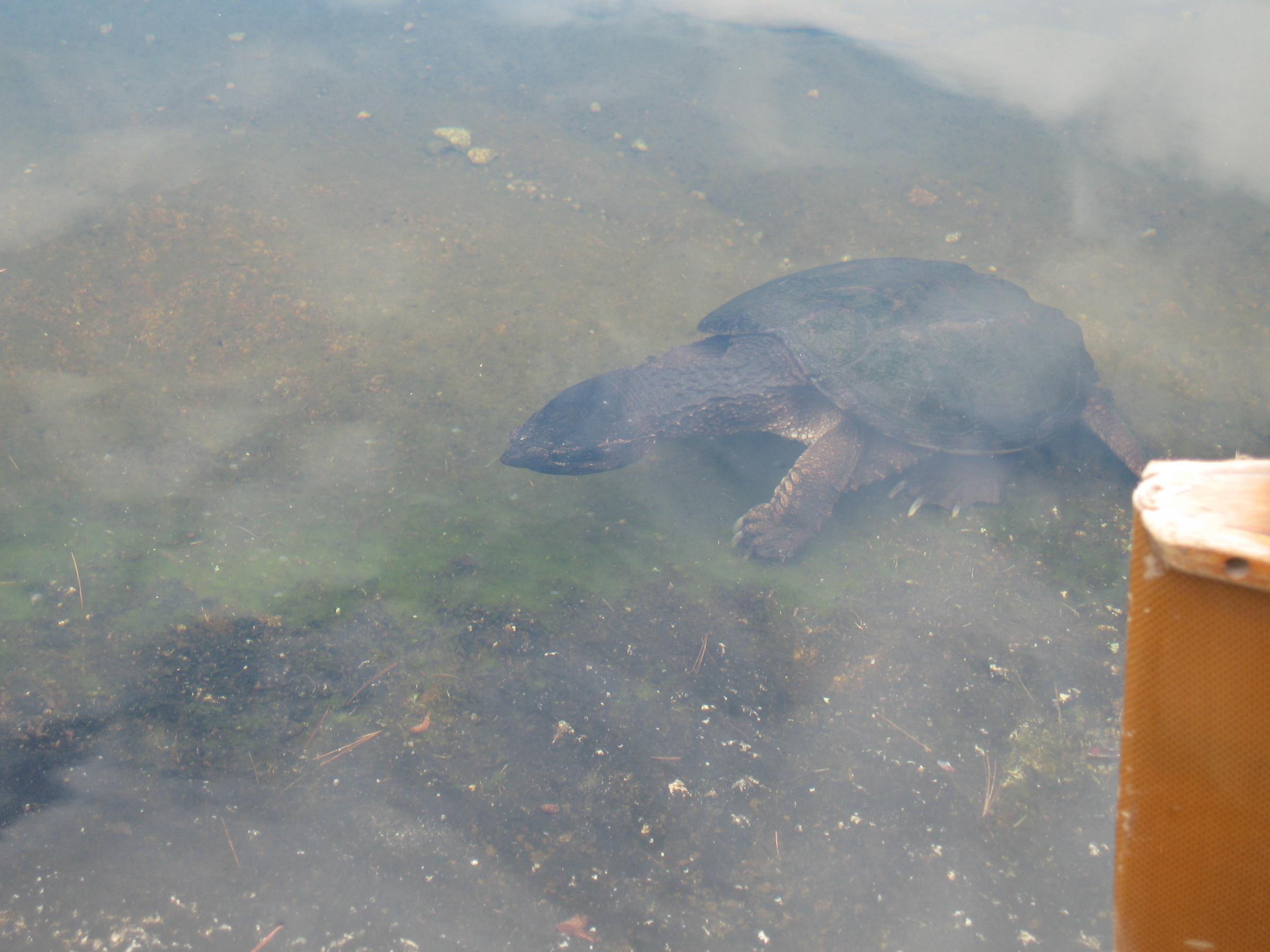 I almost lost a couple of fingers when I was filleting my walleye catch next to my canoe. There was a resident snapping turtle who came out of no where from under my canoe and grabbed on to my filets as I was rinsing them in the water. That neck of his seemed to stretch out to about 9 inches from his shell and clamped on to my filets. I pulled them away but lost a few inches of prime meat to Mr. Turtle. I gave him some skins for dessert. That turtle hung around the whole time we were there. I went to the other side of the campsite to go swimming.

DAY 3 -4 ( Darky to Darky River to Brent and basecamp)

Left around 7:00 am and paddled across Darky to take on the 191 rod Darky River portage into Brent Lake. It was a bit tough going and seemed to be longer than 191 rod. I wished I could have fished some of the small pools but we figured it best to move on to Brent as it was so hot out and we wanted to find a base camp before dinnertime.

We found the 5-star island campsite in the west central part of Brent where we stayed in 2007 to be available. Swimming and fishing were on the agenda for the next couple of days. Never saw any other paddlers the past 2 days. Bugs were not too bad except some ankle biting fly’s. The walleye fishing was very good. My old Berkley fish gripper worked pretty well but was not 100% failsafe when landing fish. I bought a bright orange cheap plastic gripper from Bass Pro and it worked pretty well. The grippers saved us from bringing a heavier and bulky landing net. 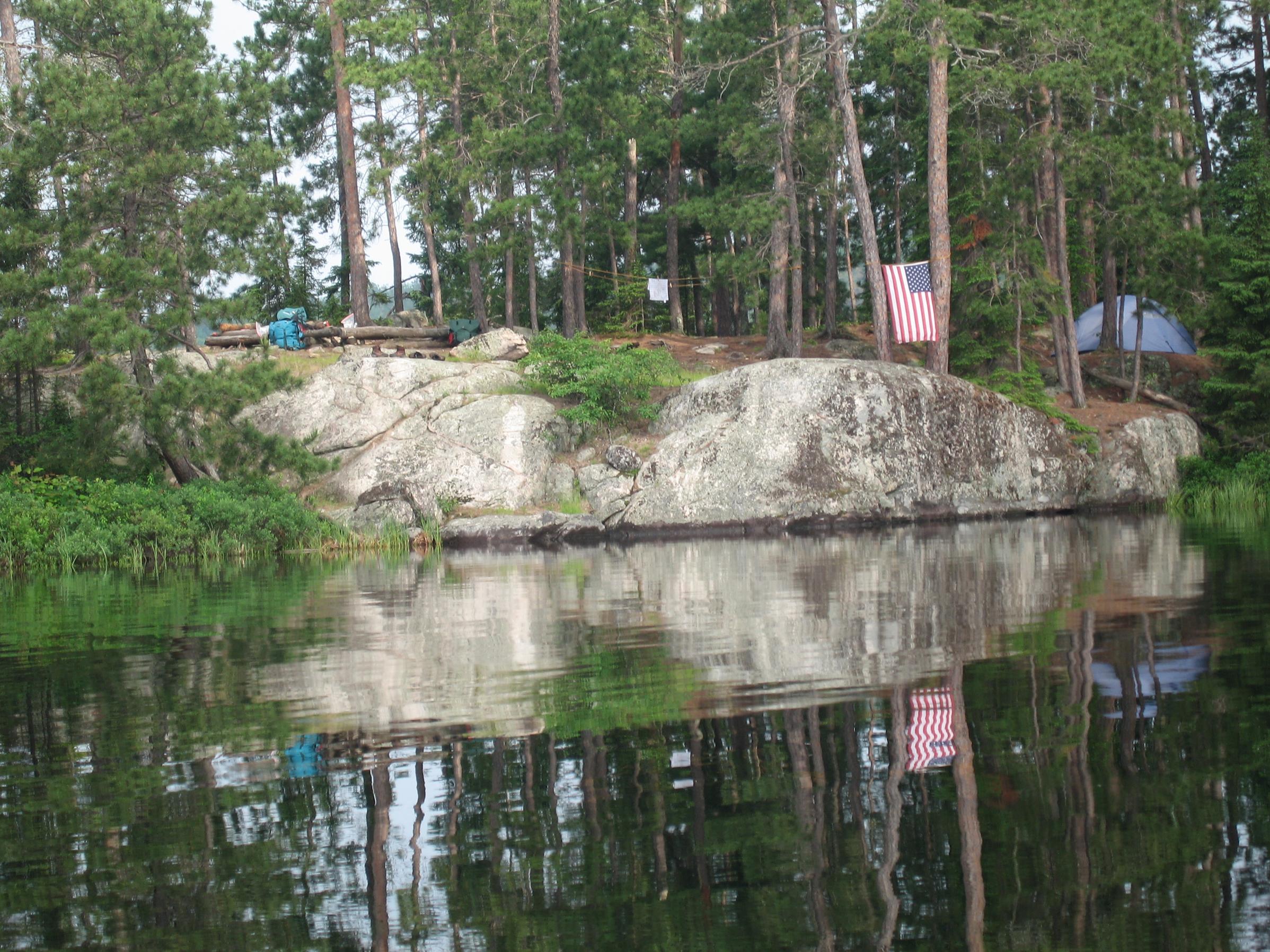 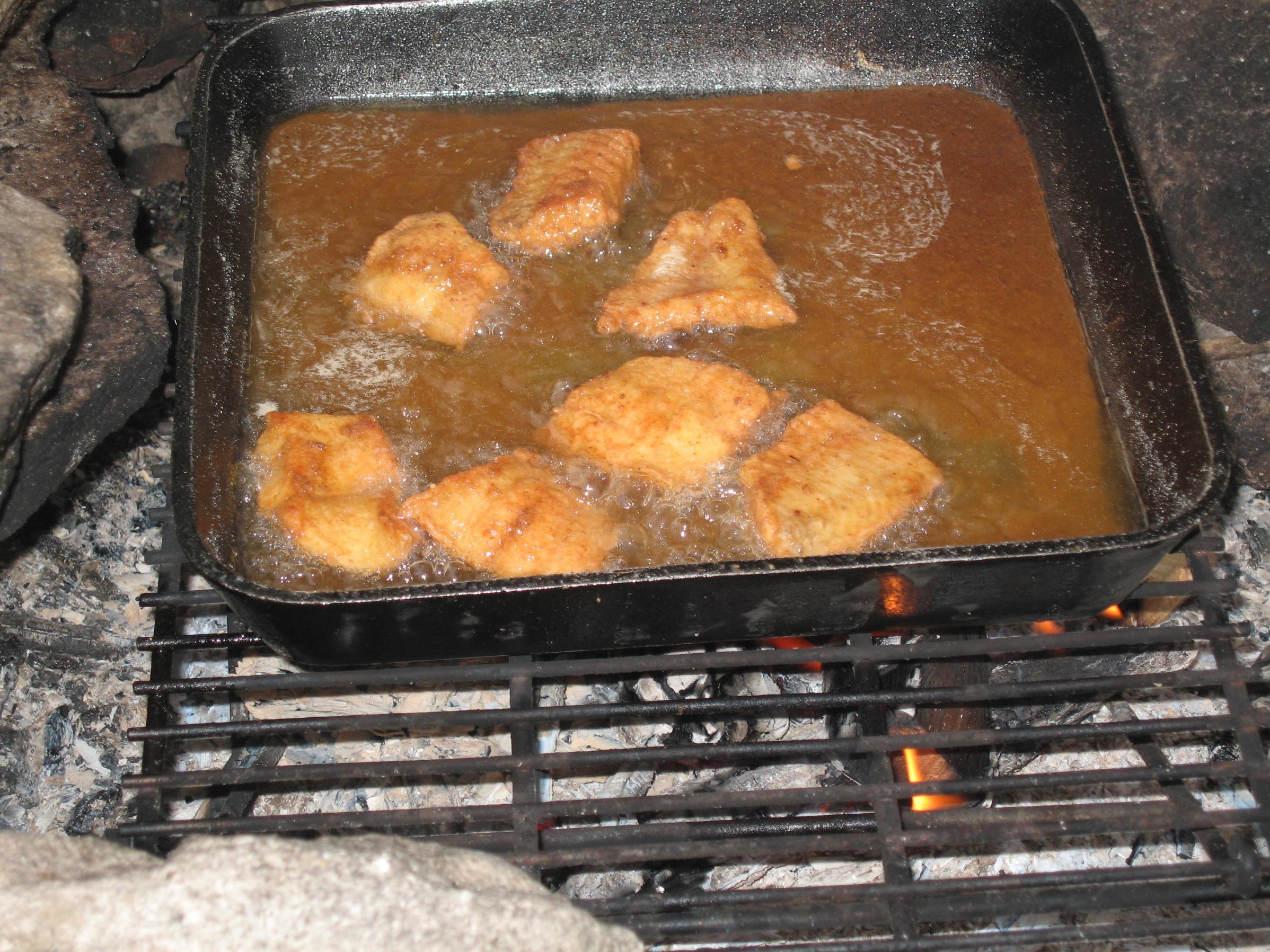 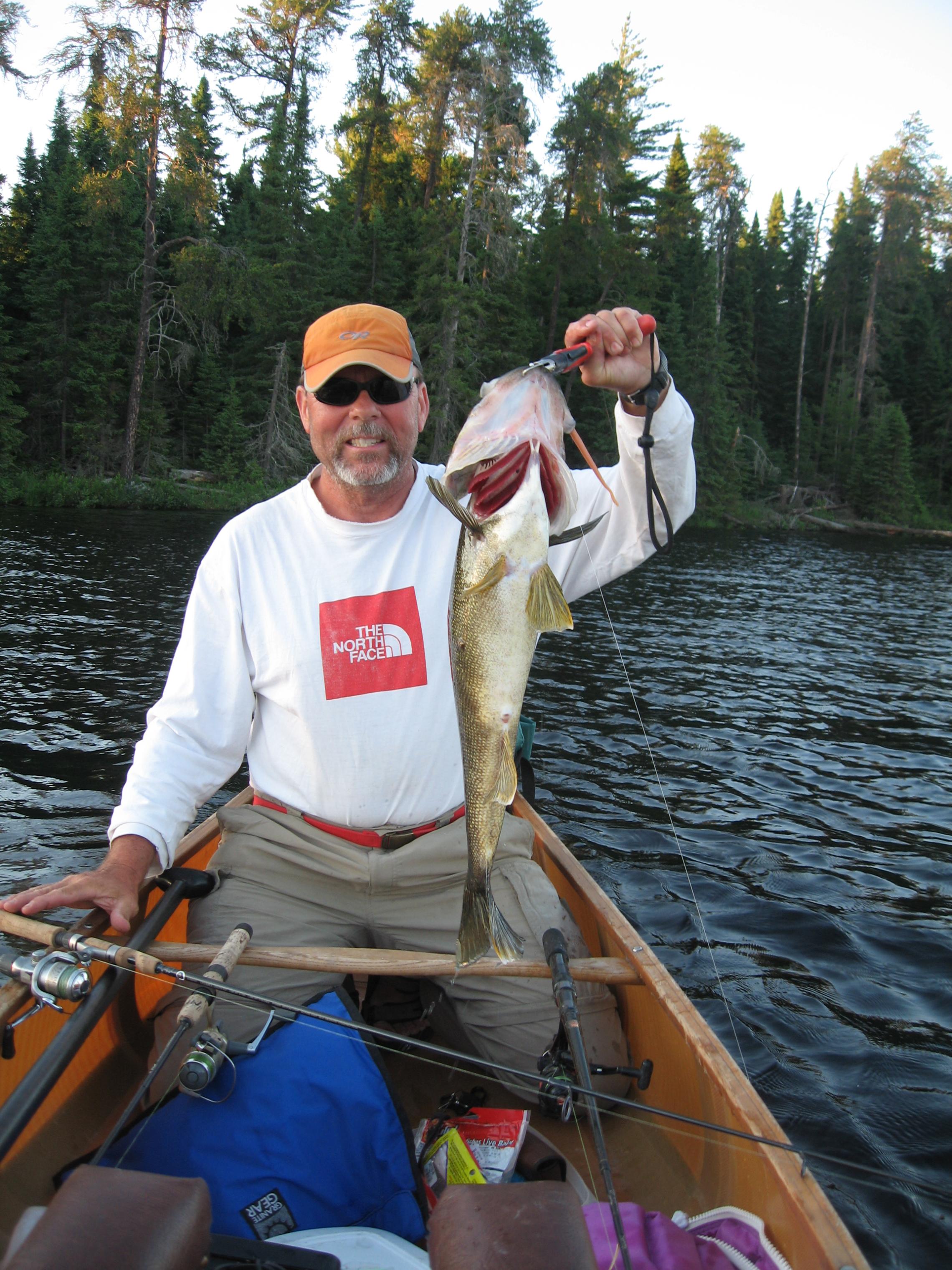 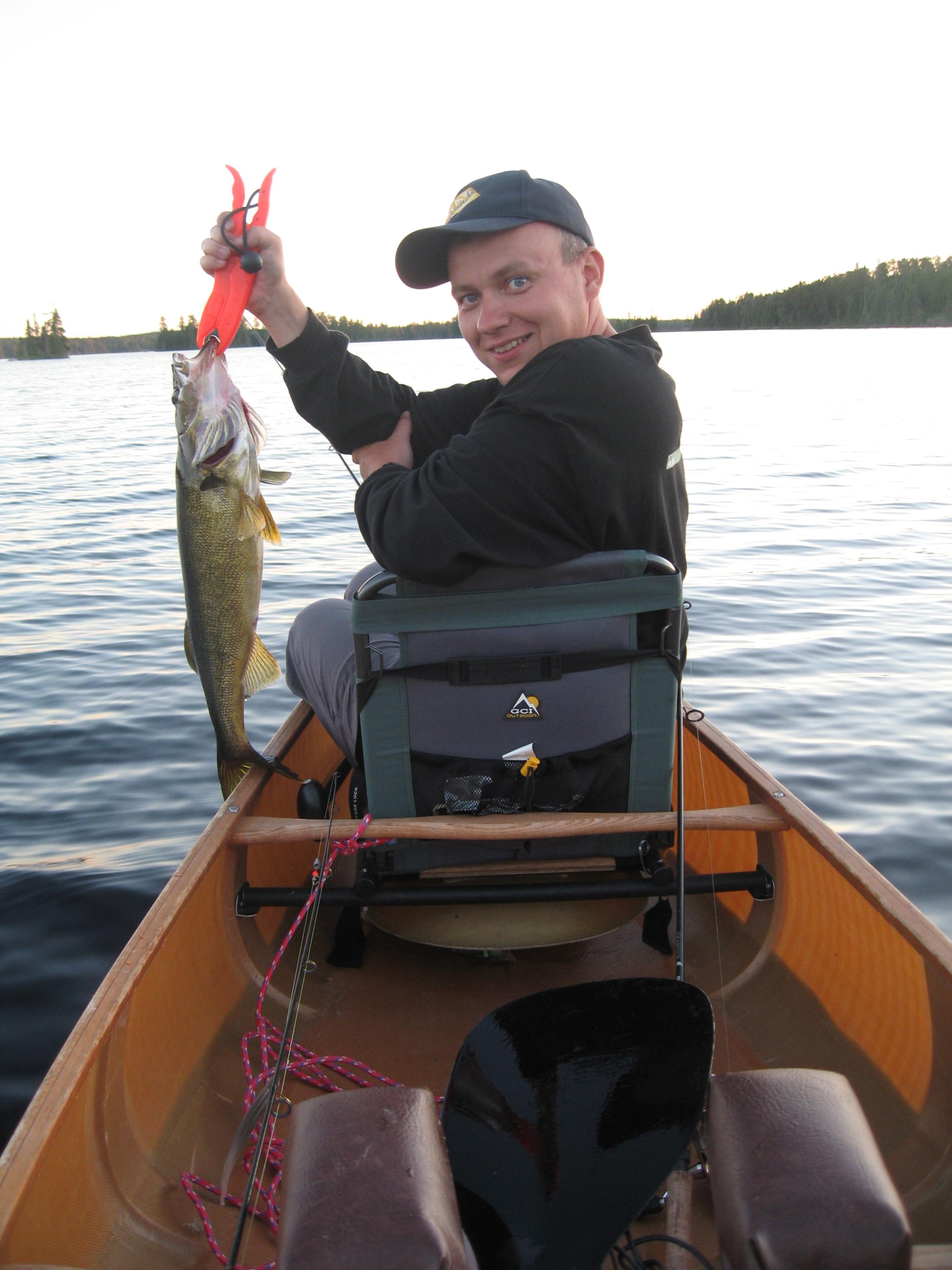 Woke up to a very windy morning and we were off to visit Comnee. The 1st portage from Brent to Comnee was uphill and but not too long. After another easy portage were in Comnee. Whew, the wind was fierce. I almost pulled the plug on paddling into the heart of Comnee but the wind was out of the northeast and after ducking around several large islands we were able to surf down to our 3.5 - 4 –star campsite. The campsite did not have a good landing. The shoreline was very rocky so I stayed in the water and handed off packs to Eugene. 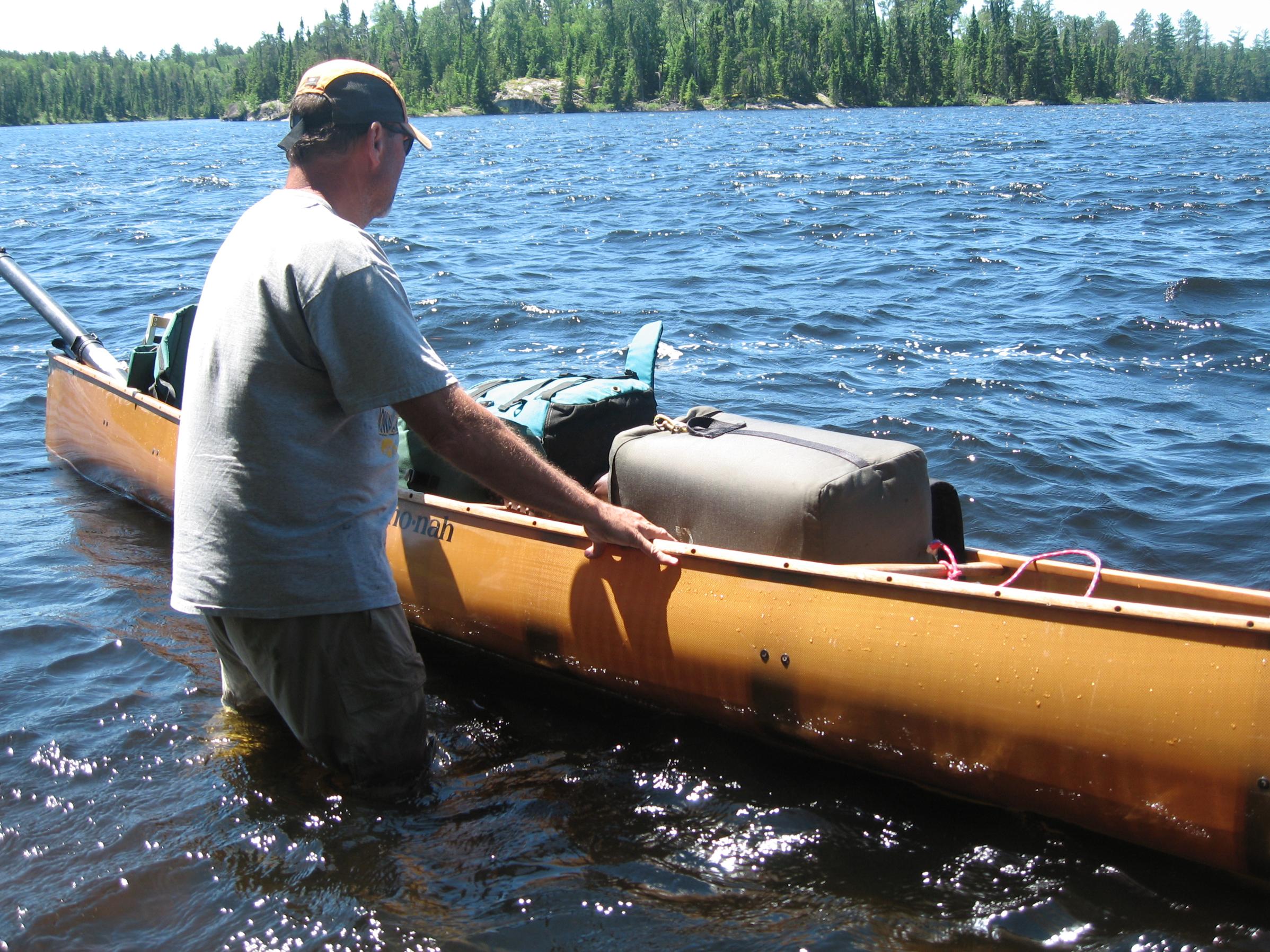 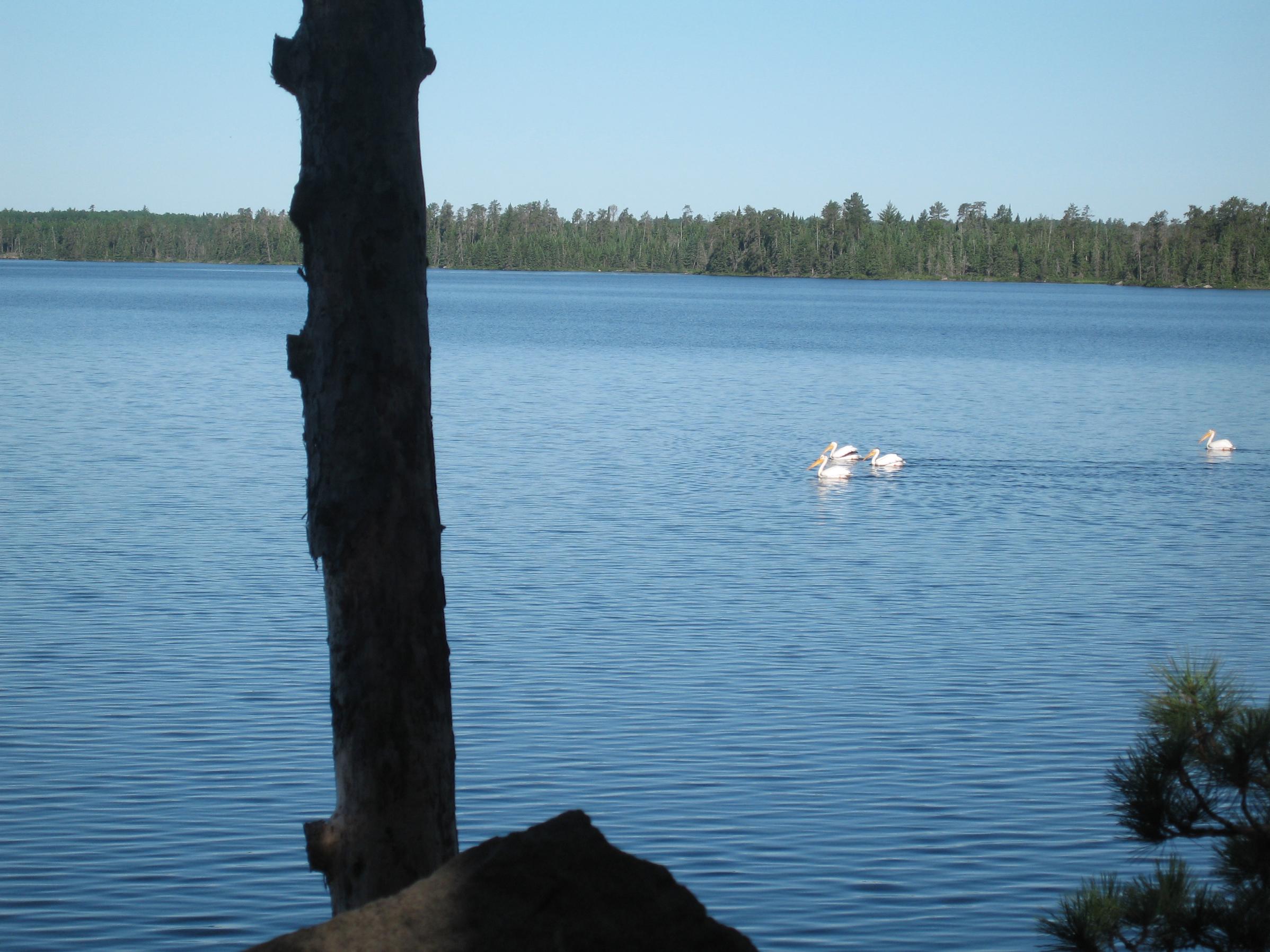 A flock of big pelicans came into our campsite area to do some fishing. I figured if the pelicans picked out this area to fish … maybe we picked the right spot to fish. Comnee has been noted to have pretty good numbers of walleye and also some big walleyes. It has been known to be a lake that does not consistently give you returns. It can turn on and turn off. Over the next 3 days we found the walleye fishing to be exceptionally good but only so so for smallies. The largest smallie was only 18 inches and the topwater bite for smallies was not what it normally is. Perhaps because the water was abnormally warm. Many times when We swim around the last week of June to the 4th of July you don’t normally stay in the water all that long. On this trip we lounged around the water as long as you wanted.

I have fished Comnee several times before and used nightcrawlers and I found livebait to really be the ticket on this lake. However, with the livebait ban in Quetico … I have found my catch rate in numbers and size has been reduced by 30%. I have been trying different methods to overcome the livebait ban but while I still do well …it is still not quite what it used to be when I used worms. 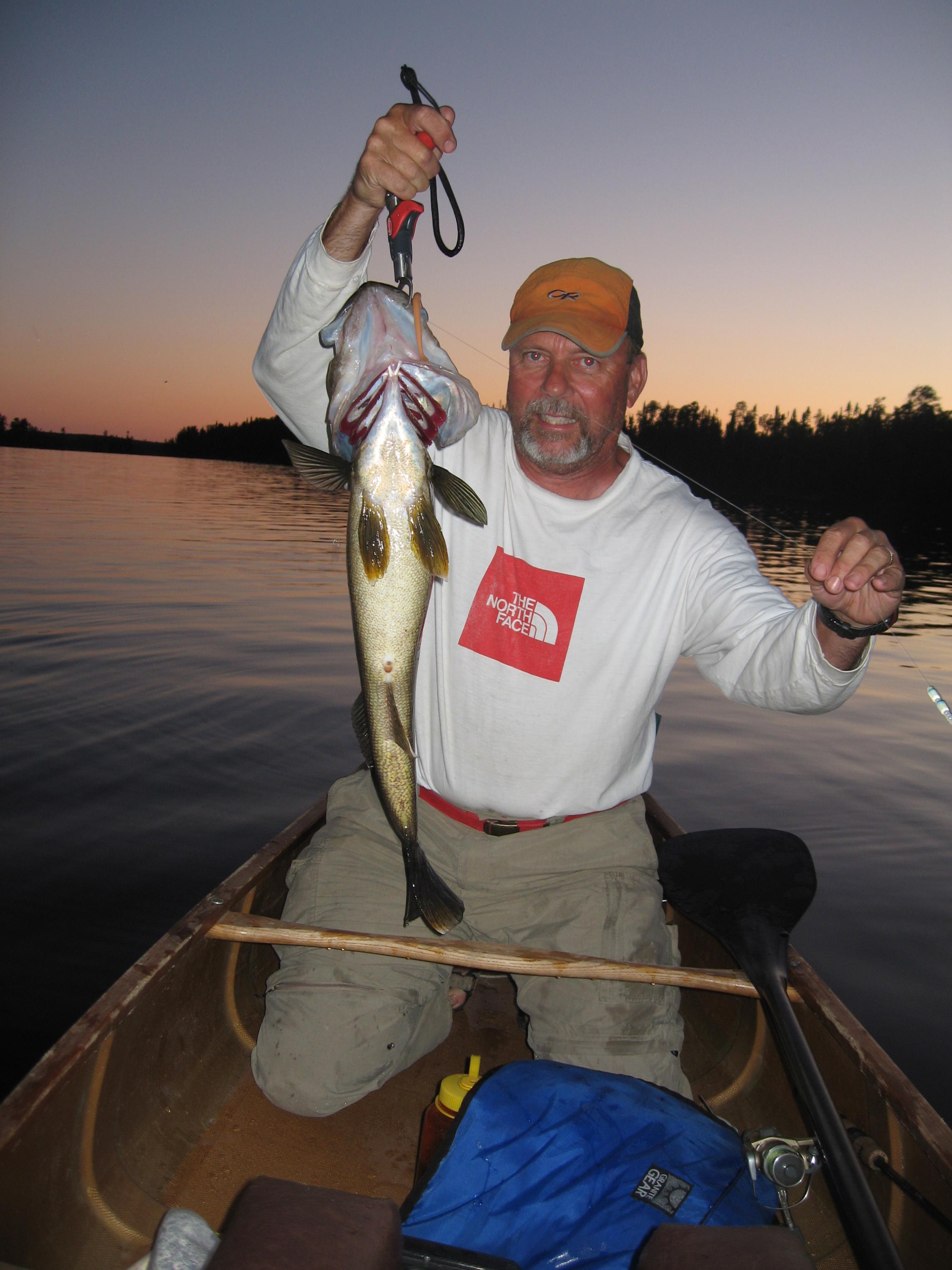 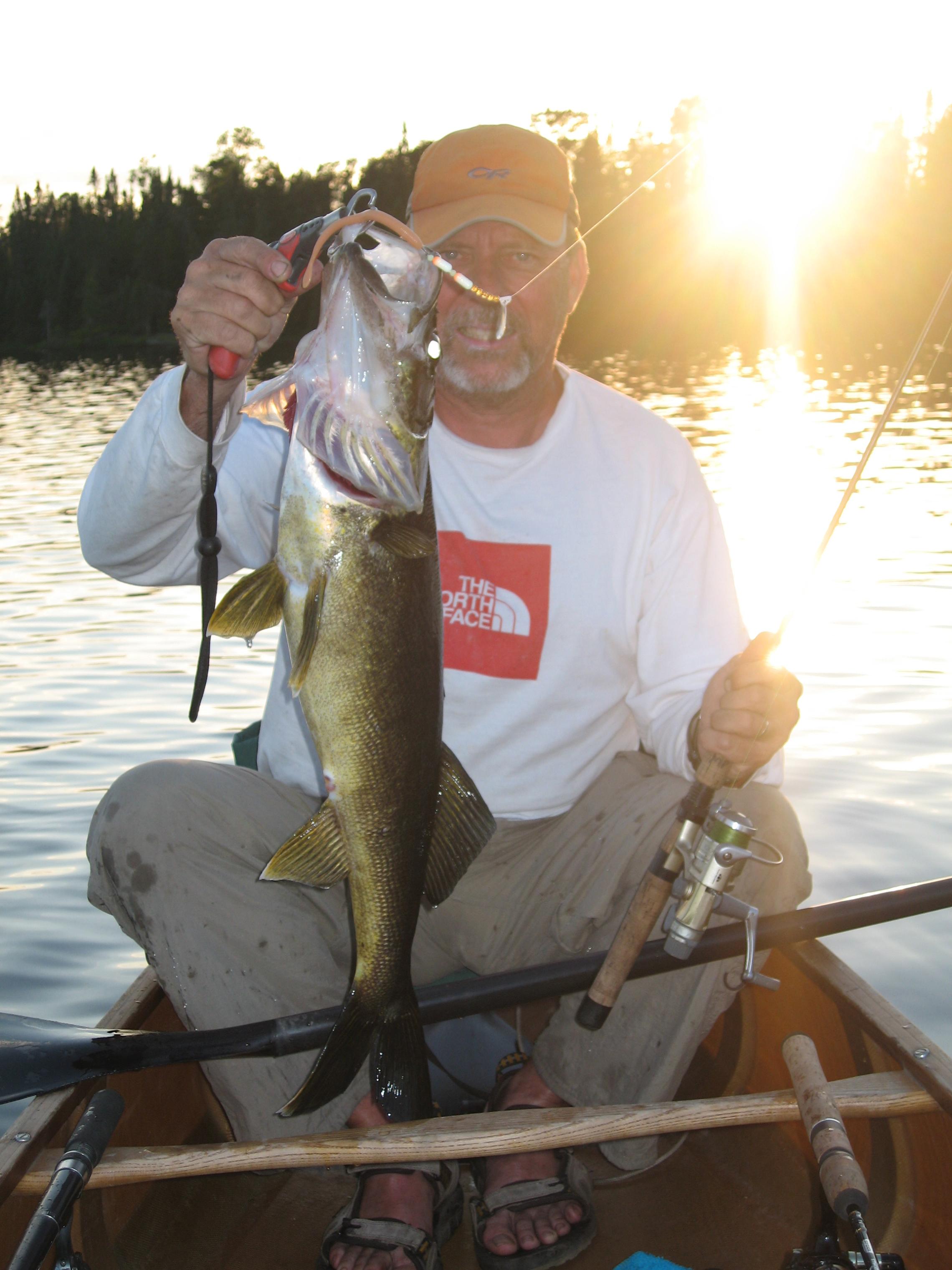 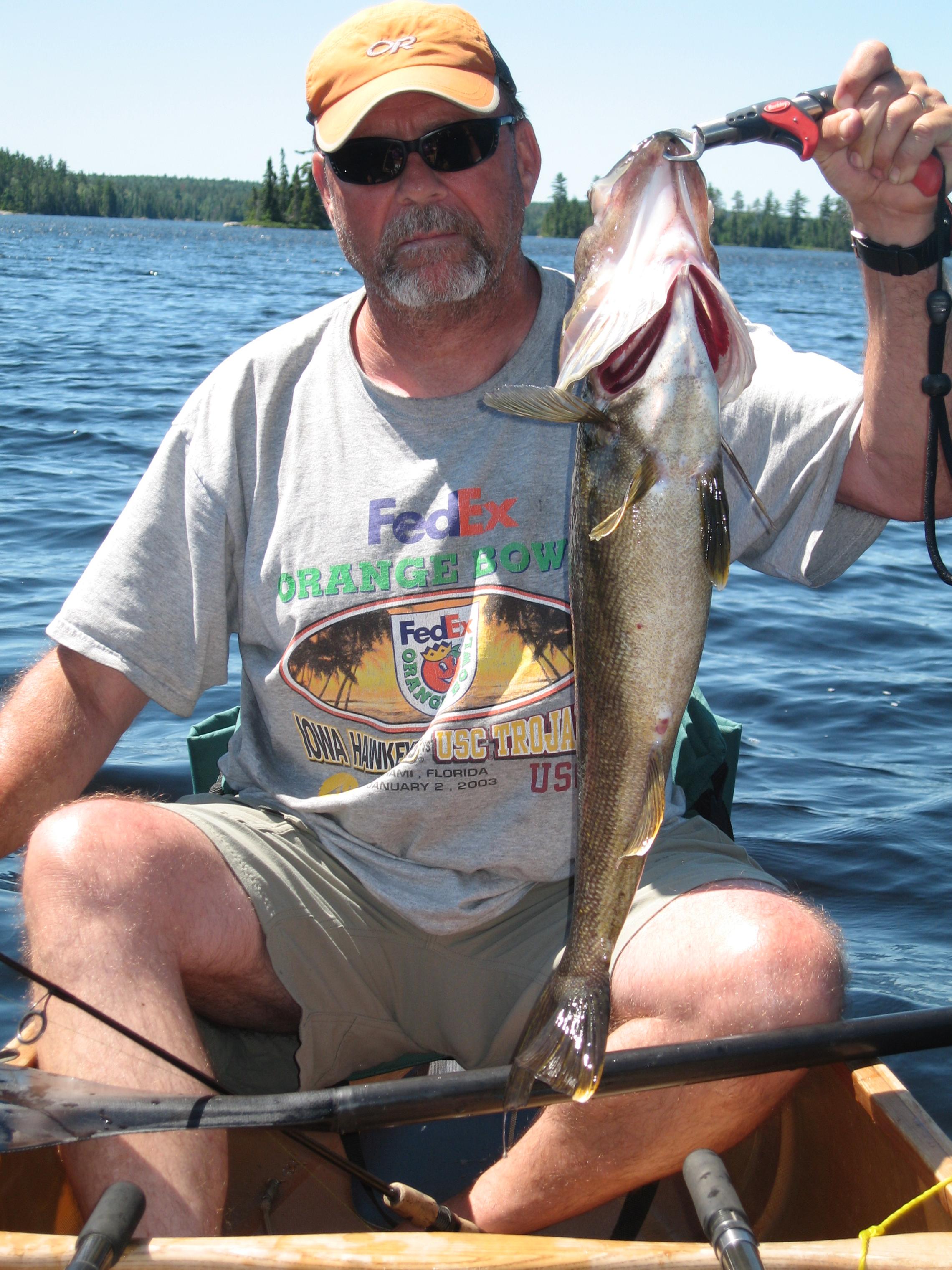 DAY 8 ( Comnee to William to Darky)


I originally wanted to camp and fish Suzanette but it was difficult to leave the good walleye fishing we experienced on the stained waters of Comnee. Will have to give Suzanette a try some other time. We made our way out of Comnee and portaged into William Lake . We had lunch on a 5 star island camp at the east end of the lake. It had an extraordinary fireplace ( probably put together by a scout group) . There was also a table that had large flat stones as seats and for a tabletop.Never have seen such a setup before. 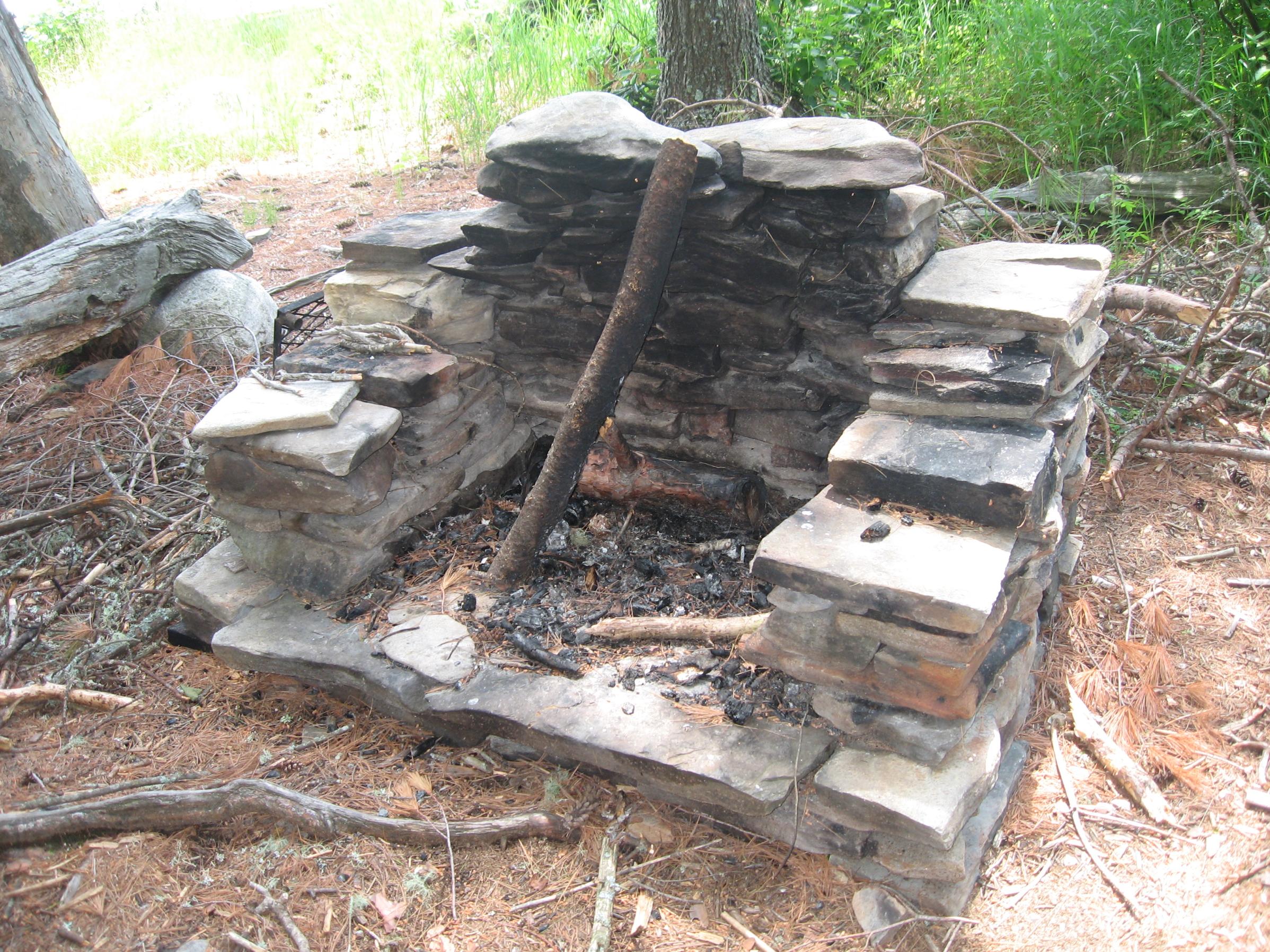 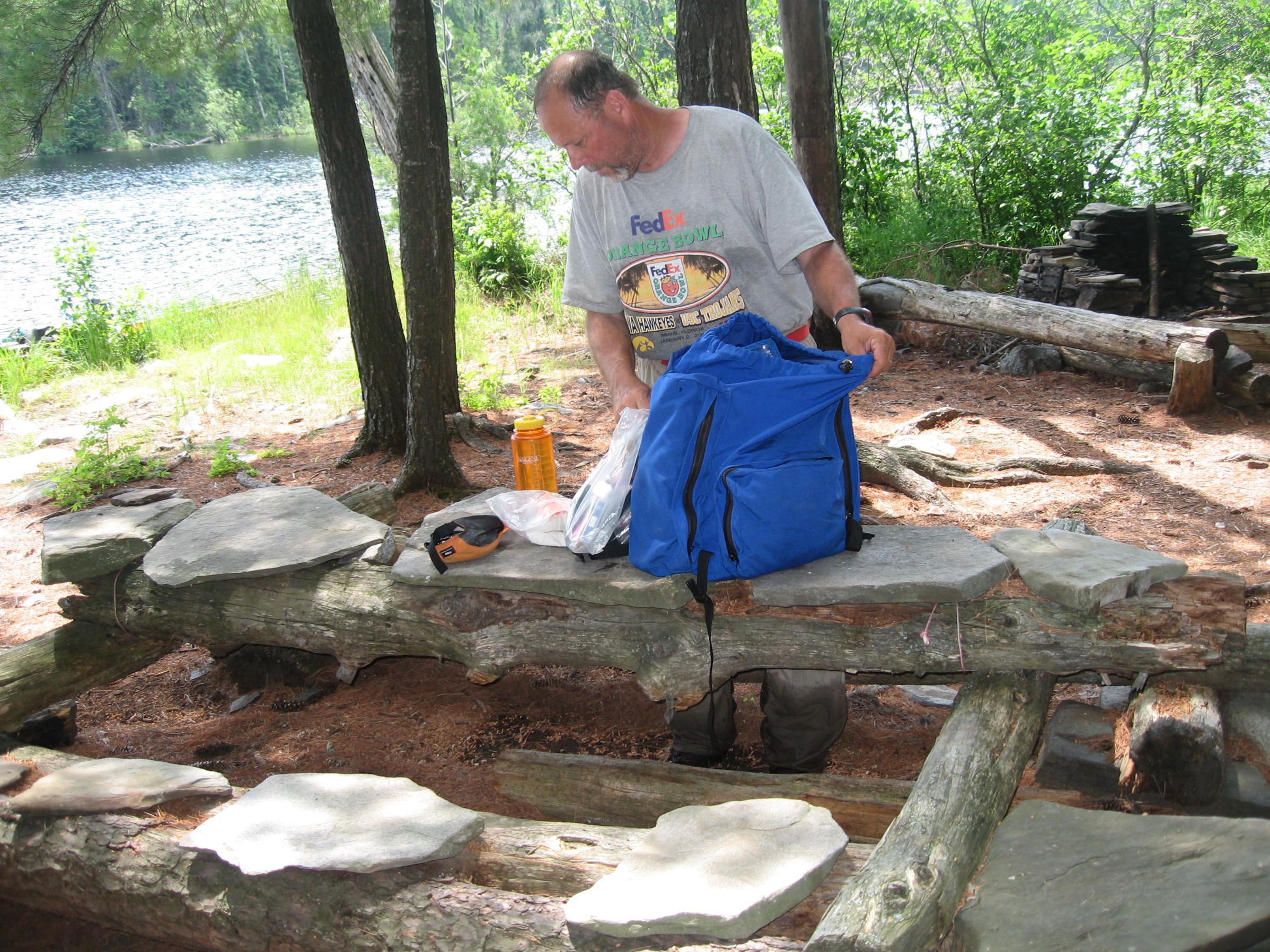 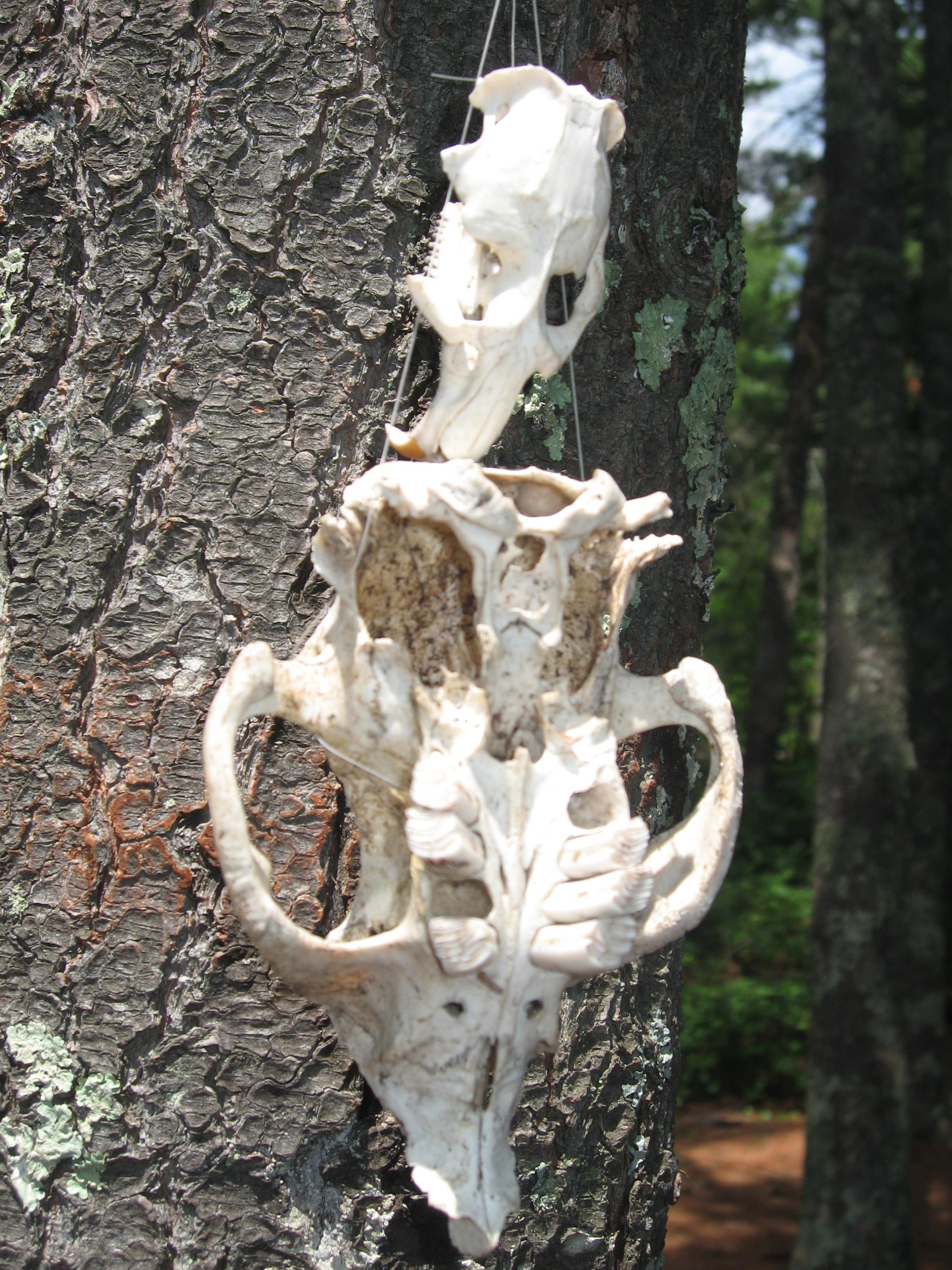 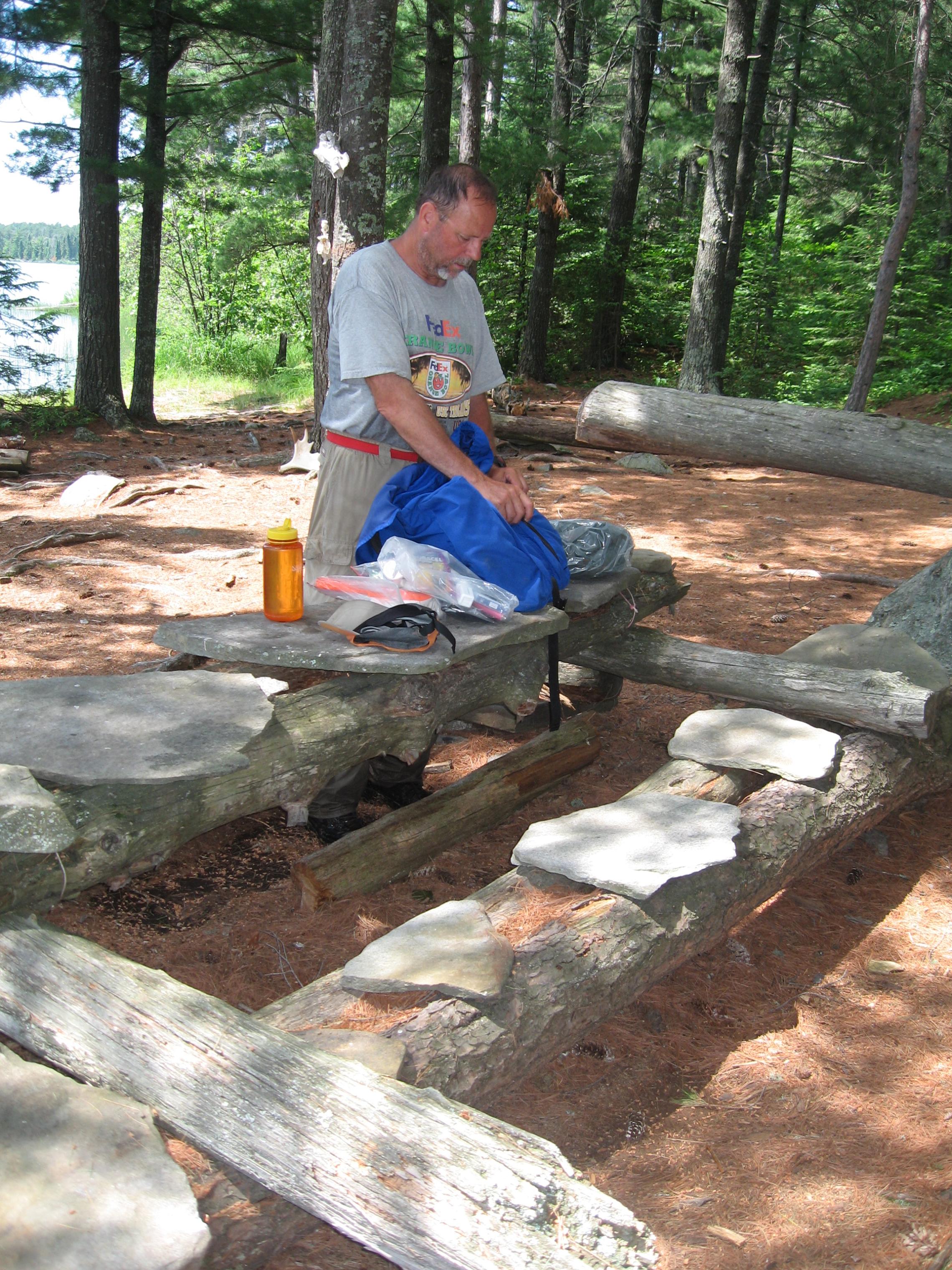 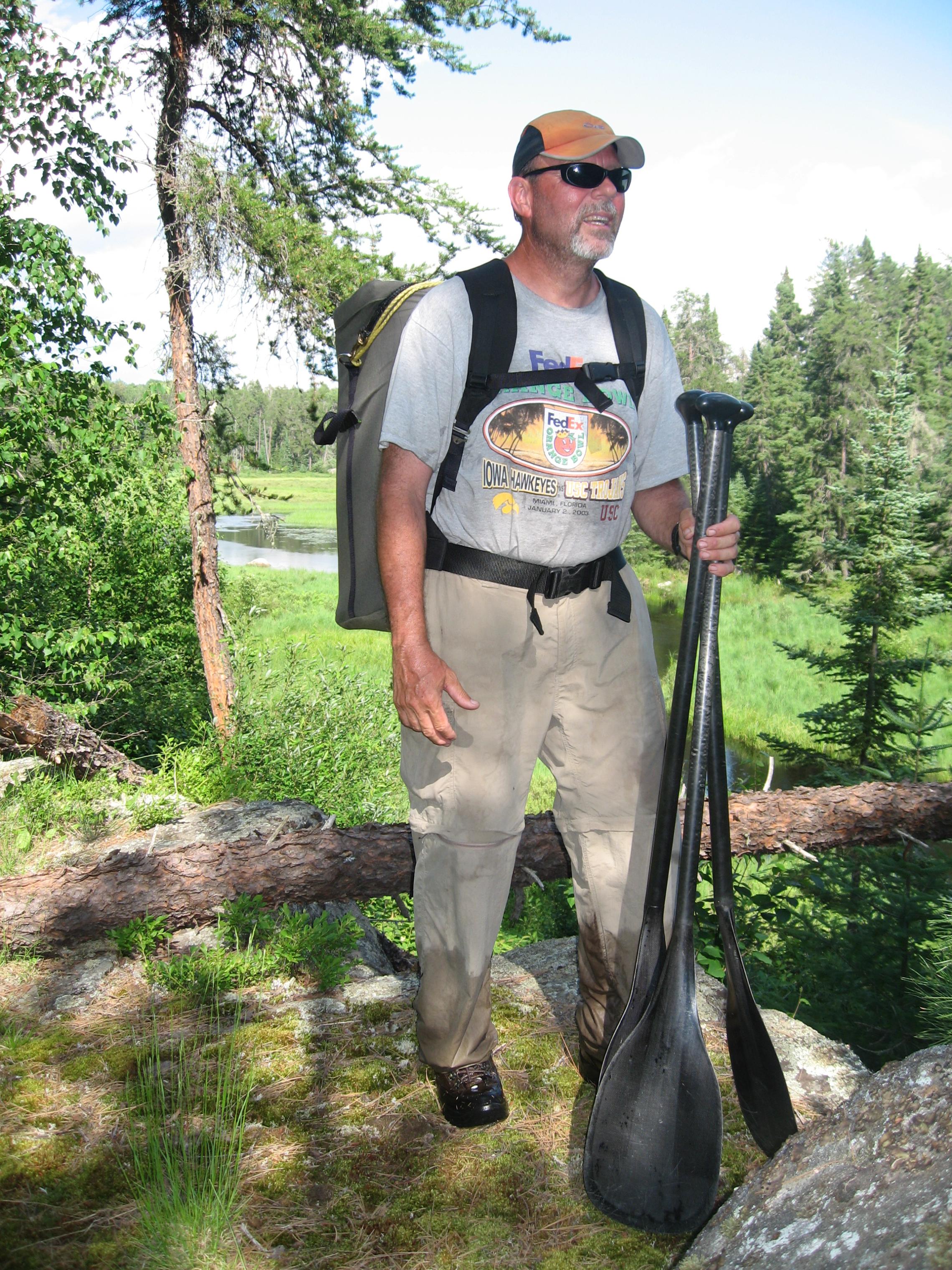 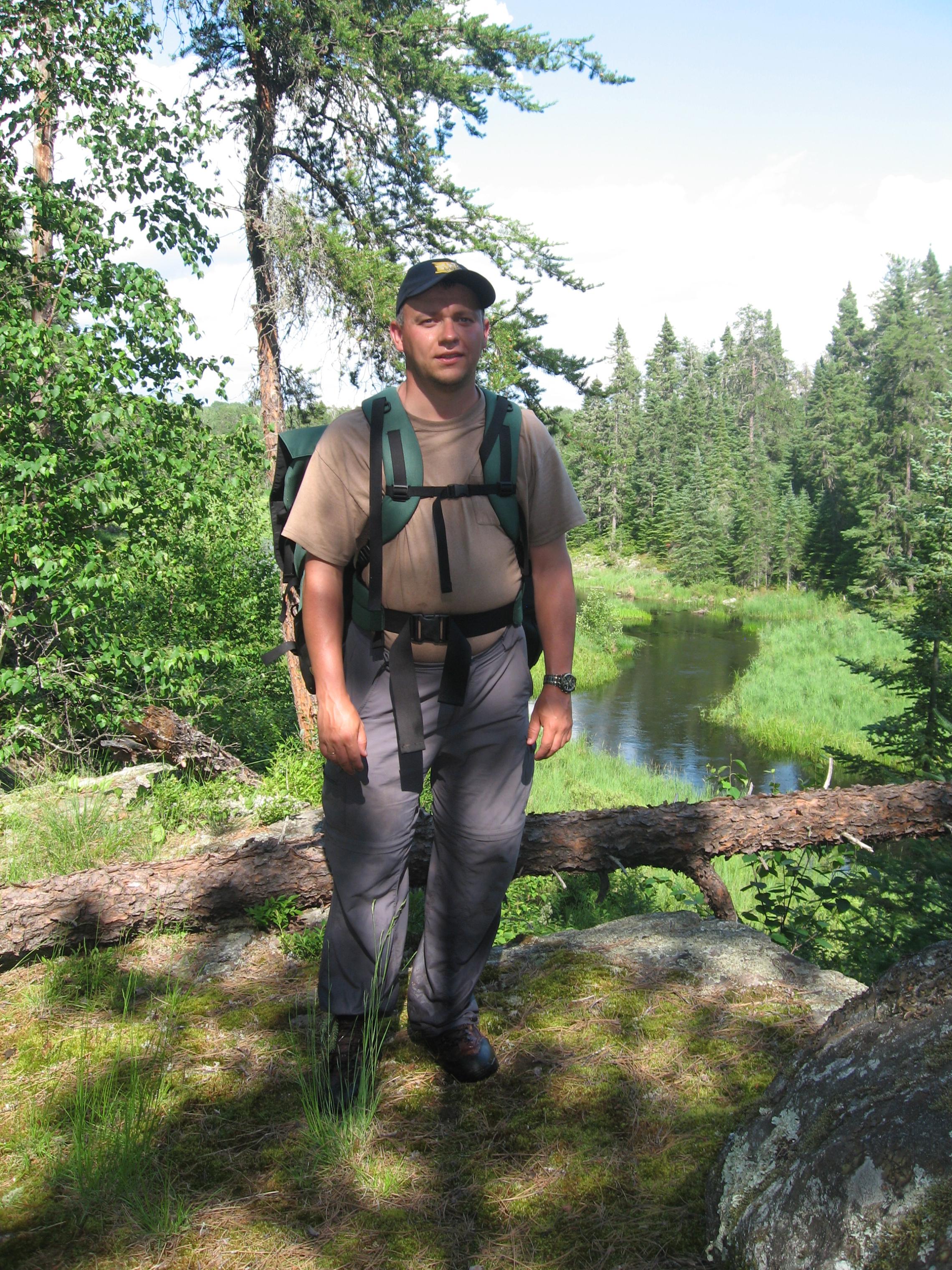 Worked our way down the rocky ledges that lead down to Darky. A bad blowdown near the end of the portage into Darky caused us some hardship but we made our way through. The daytime temps were in the 90’s and there was very little wind. We ended up camping on the same island on Darky as when we came in. The Hilton was already occupied. There was a very bad storm with heavy rain, damaging winds and lightning and thunder that night of the 4th of July. Not sure why there are such violent storms in Quetico on the 4th of July. I think it was a 3 ½ inch rain.

The ride down the Darky River was nice. The scenery was beautiful and the weather turned out to be sunny and not too hot. The portages to Minn were not too tough either. 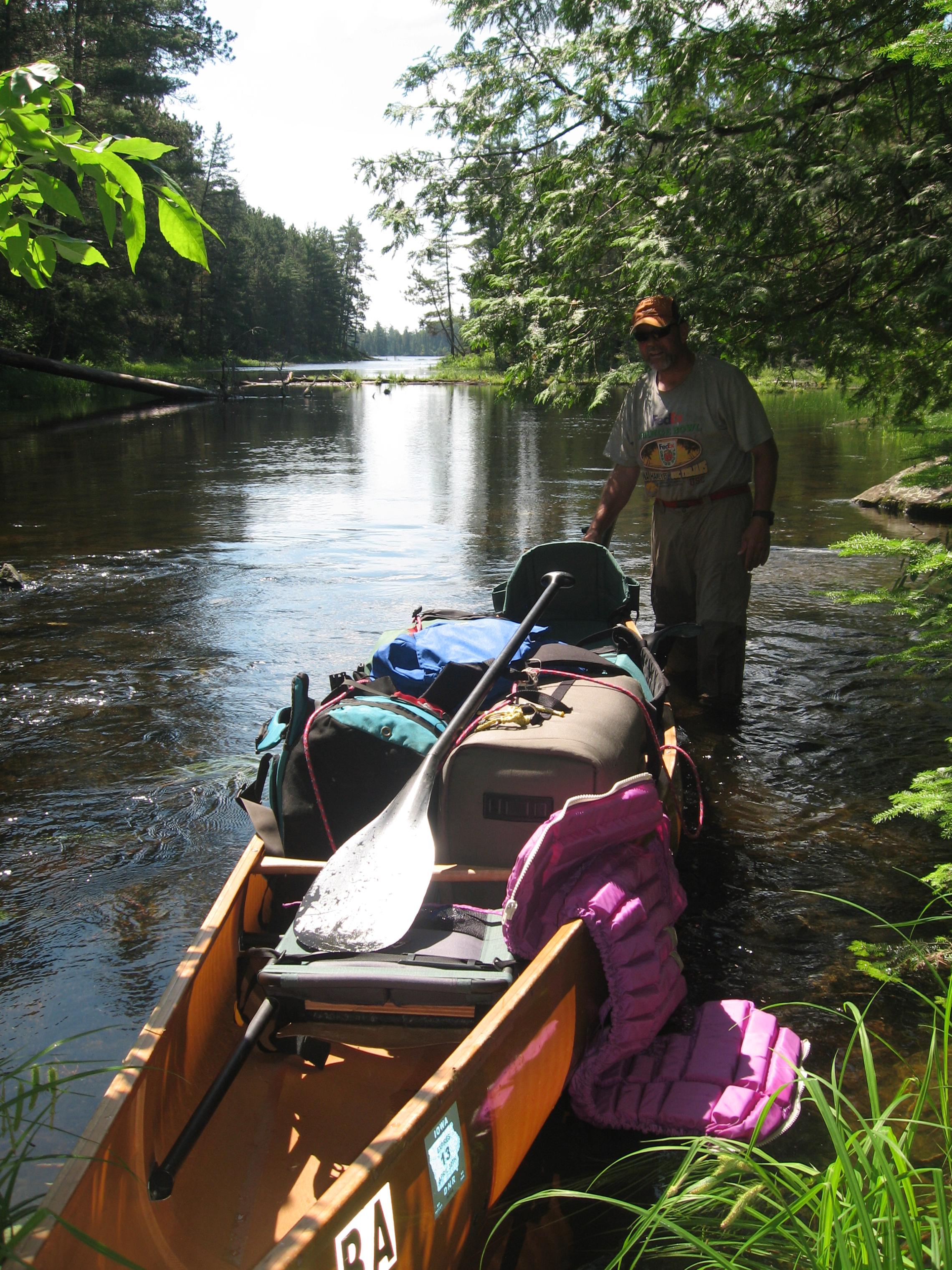 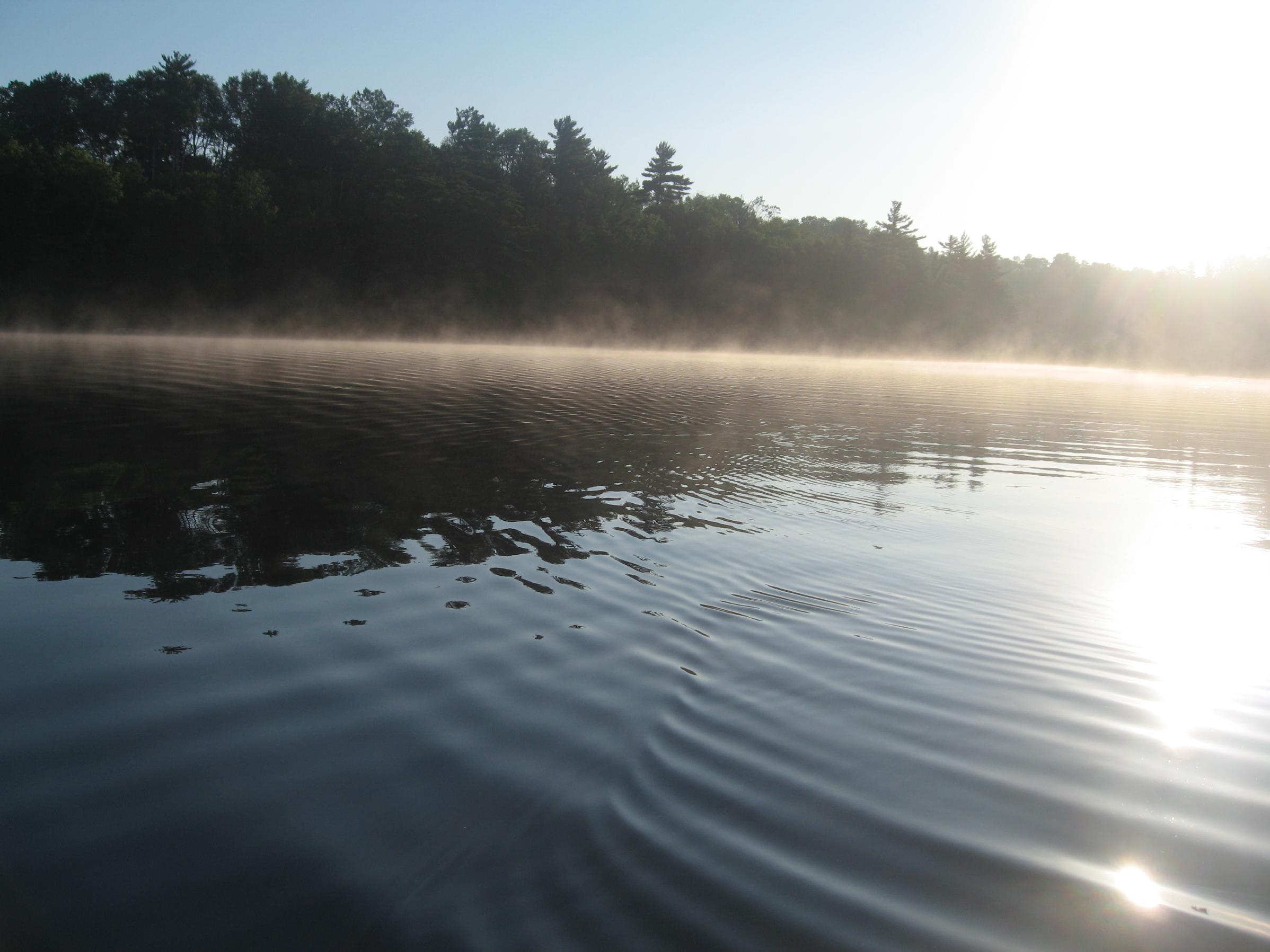 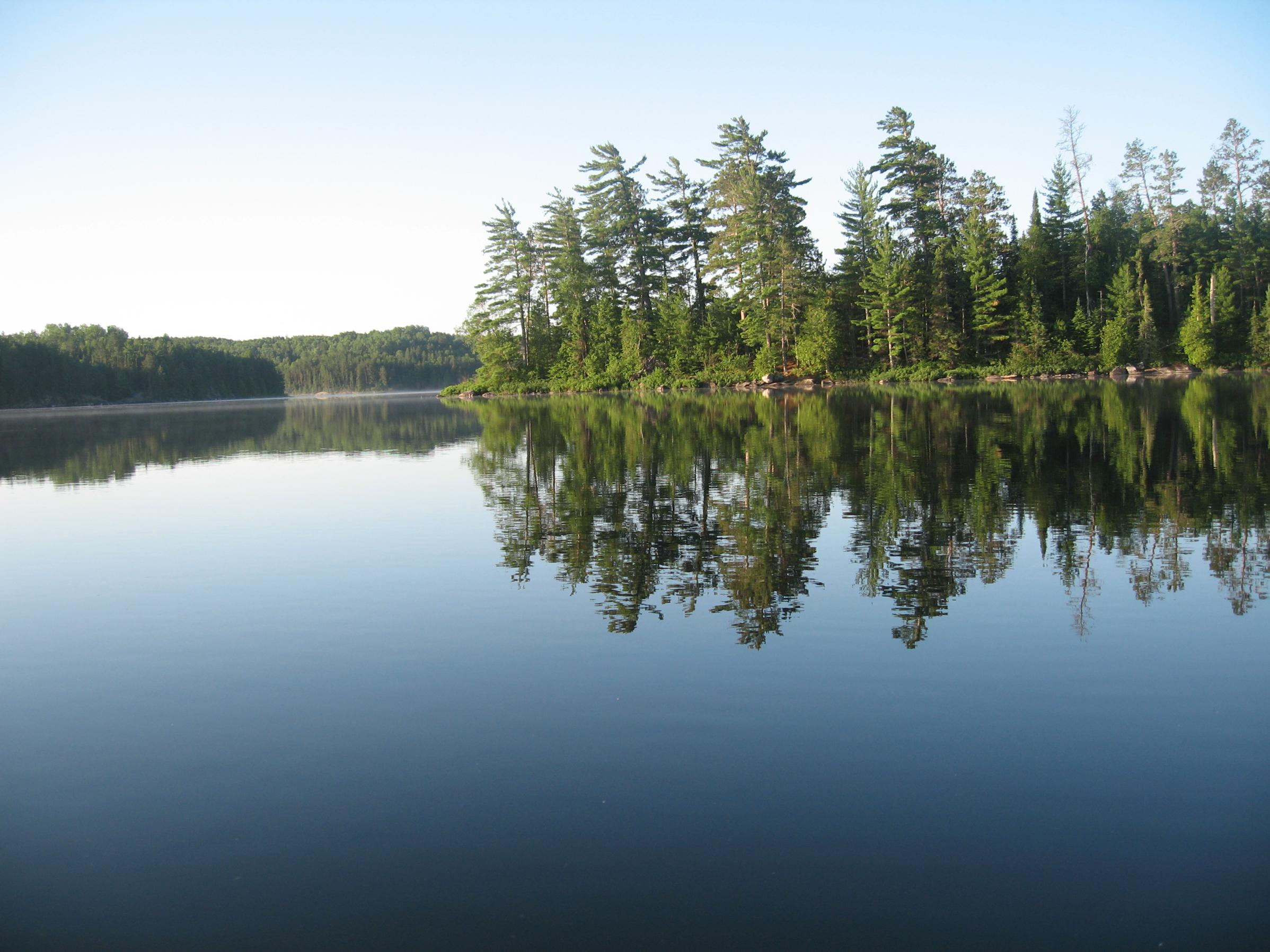 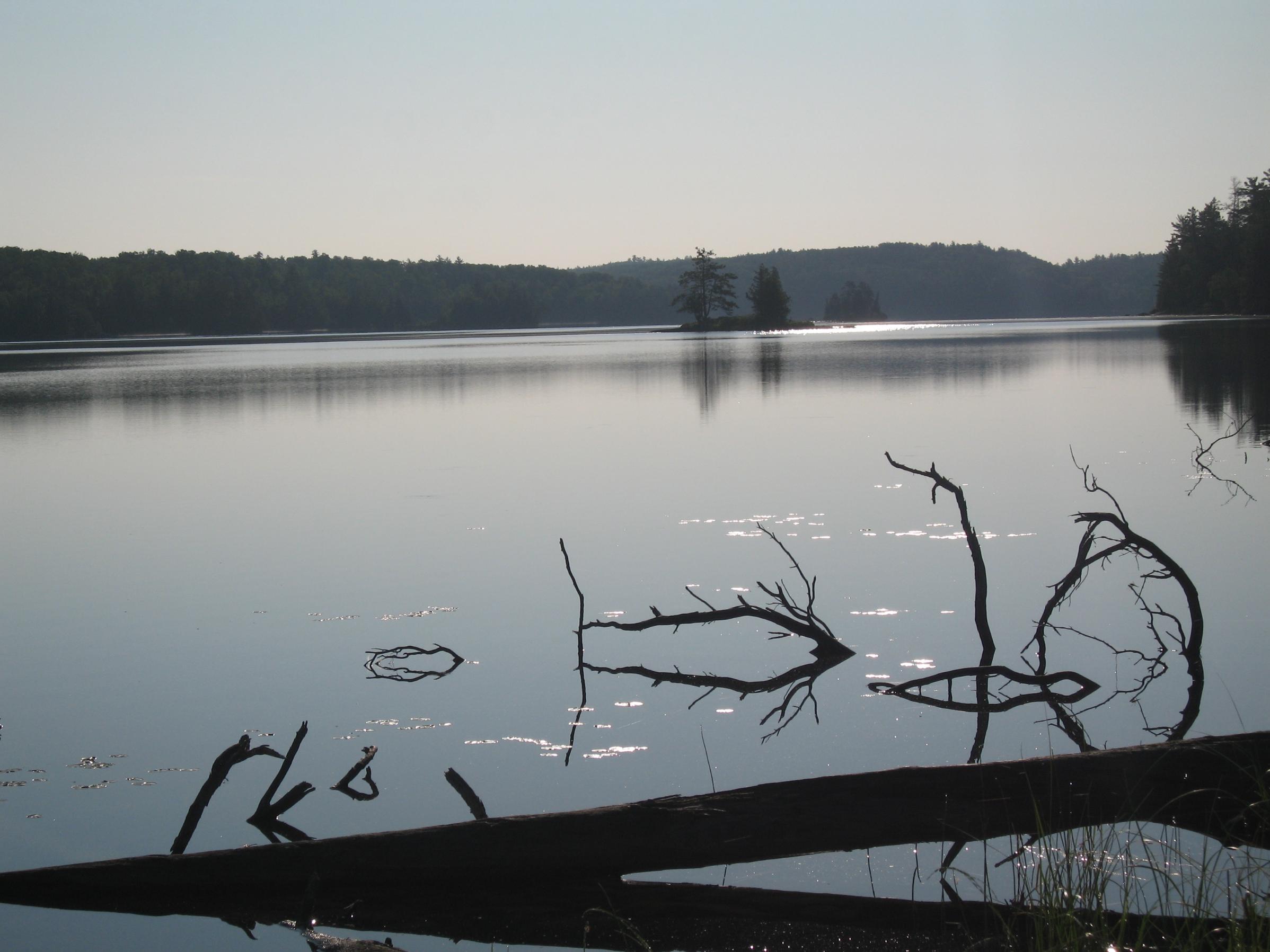 The winds picked up later that afternoon and we rode some whitecaps on Minn for over an hour and a half. We made it to a descent campsite on McAree around 6:00 pm. I wanted to get some lake trout fishing in but we were too tuckered out. We decided to take it easy and go swimming. The mosquitos were getting bad that evening and after we finished off our scotch …it was off sleep. We heard a pack of wolves howling before we went to sleep.
DAY 10
Got picked up at our pickup point at Black Robe portage at 9:00 am. It turned out to be a buggy site. It was back to Zups for a quick shower . We then got towed back to Scotts Marina and checked in with U.S
Back to Trip Report Main Menu