Trip Type: Hiking
Entry Date: 09/17/2011
Entry & Exit Point: Other
Number of Days: 2
Group Size: 1
Trip Introduction:
I had planned to solo in the BW this summer, but it did not work out. So, instead, I took a little mini-solo hike-in trip much closer to home.
Discuss Trip: View Discussion Thread (22 messages)
Report
I did it! 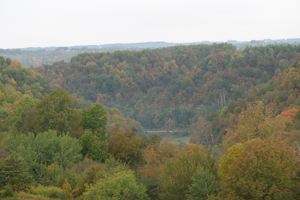 (Kickapoo Valley; photo not taken by me)

My first solo is under my belt. It was not a canoe-camping solo, but I was all alone, none the less.

I got to the visitor center at the Kickapoo Valley Reserve (http://kvr.state.wi.us/) near LaFarge, Wisconsin, and talked to the ranger guy. He suggested site F, also called Hanson's Hollow. It's their most remote site and has a nice fresh spring right by it. I choose not to go to a canoe-access site (on the Kickapoo River) just because this one sounded more secluded. Of course, my hike-in distance just went up from a half mile or so to two miles (six miles, because I had to make two trips). I decided I wanted a challenge.

I started out with the first pack. Man, it's hilly. There are huge hills to climb up and down. The trail goes first through a prairie area and then into the woods. Both are equally lovely in their own way, especially with fall's first blush upon everything (it will be spectacular when the colors really get going). I hiked for what I thought was about a mile and had a little rest, and decided to go back for my other pack and "leap frog" my way there. I temporarily forgot that I would not know if anyone else was already camping at the site until I got there. That could have been a big "oops" but turns out no one else was there. Whew.

I managed to make it to the site but I was really bushed. The six miles is like double portaging the Angleworm portage, right? Well, minus a few rocks. Quite a few...there aren't many rocks there. But the terrain was still tough at times with the hills, though the trail was pretty smooth. I ate lunch and then set up camp. Tent, tarp...done. My tarp hanging skills are kind of sad, but whatever. It worked. I also only had two trees to hang it between, with one long line off into the woods. The site is just a giant oval in a clearing in the woods. A fire pit is the only amenity. I checked out the spring. Looked great, but where I was looking wasn't quite where the water actually came out of the ground at. So I went 10-15 feet further up and found the source. And 3' from the source there was a giant dead frog belly up in the water. Appetizing! I got the frog out but the rest of the time boiled my water. Good thing I had plenty of fuel (I had left my filter at the car, and extra water, too).

The Kickapoo Reserve is comprised of land that was purchased to use for a dam/reservior project that never came to be. I presume "Hanson" of Hanson's Hollow once owned that land. The visitor center goes into detail about the site and the dam project and the reserve. In the end it sounds like because the land (and land farther up river, too) is more natural now and not being farmed or grazed, and wetlands have been allowed to return, the flooding risk has gone way down (though it can still happen). It was weird to think I was camping in a spot that could have been way underwater instead. The history of this is actually very interesting and parallels, sort of, things that happened in the BW. There is a history of it at this link: http://kvr.state.wi.us/category.asp?linkcatid=1858&linkid=945&locid=115.

The site is remote but at the intersection of three trails. There are equestrian trails, too, and I saw three groups of riders go by. The third I could hear coming way off as they were talking very loudly. Turns out they were talking so loud so that they could hear one another over their radio. One of their horses dropped some bombs right at the path to the spring, which I had to dodge the rest of the time. I also wondered how long, given average weather conditions, horse poop still looks like horse poop. You have time for these thoughts on a solo trip. ;-) (I know it lasts longer than three days...)

I had a nice fire (started with one match) and roasted marshmallows and went into my tent before it was full dark and read a book. Ahhh...

It rained in the night and was raining when I got up. Not much though. I also decided I was NOT going to do the six-mile portage thing on my way out again, no way. So I went through all my gear and picked out what I thought was "extra" or would no longer need. I knew I'd have to tie my tent to the remaining backpack as it would not all fit inside. I bummed around camp and stayed under my tarp reading in during the rain. I also cut firewood. Eventually I was ready for the trip back to the car. I told myself I'd reward myself with something to eat in town. So I hiked back to the car (it was done raining by this time) and went into town and the only thing open was a bar or a gas station. I had a burger and a beer at the bar. The Packer game was playing. There were like six other people there. LaFarge is a tiny town. ;-)

I hiked back in through the mist and saw two groups of hunters with guns. Not sure what season it is...

The rain picked up for my hike back. I sat under my tarp and made dinner. Then again I went to my tent early to read. I finished two books on this trip!

My tent leaked. I could not set it up so that the fly was not resting on the tent mesh ceiling and eventually the water would drip, though mostly it would then slide down the side and puddle up. I pulled my innie around me and got out from under the worst part. I'm not sure if it was user error or that my tent is old and just "not right" anymore (it's a Walrus Arch Rival, purchased in the early 90s). Maybe an excuse to get a new tent? ;-) I considered moving it under my tarp, but it's not a free-standing tent and I thought it would be a disaster to move in the rain and dark.

It rained all night. I had one good sized puddle in the morning, but the rain had stopped. I had used two hand warmers when I first got in my sleeping bag that night, but otherwise I was warm. In the morning I had breakfast and packed up. I was so proud of how I packed that pack up so tight and nice, with my tent on the outside of it. Then I tried to put it on. The site had nothing other than the fire pit to prop something up on. I tried getting in on while in a squat and then standing up...I did the turtle. Managed to get it up on my thigh and then got it on...yowzers, it was HEAVY. But it was on and I was on my way out. It was better to go the two miles with a heavy pack than to do six miles again; my legs were already sore. I hoped I would not slip on muddy hills because if I fell I was not sure that I would get back up. ;-)

Today I am sore but actually moving around better than I was yesterday. And I really appreciated my yard for setting things back up and getting them dried out. So nice not to live in a condo anymore!

Things I learned: I CAN do it. I didn't mind being alone at night. I missed company when around the campfire. I wondered what my family was doing and if they were having fun at my husband's cousin's wedding. My cell phone did not work in the valley, nor in LaFarge. In that respect, it was like being in the BW, and a true test for me. If I were staying out longer than two nights, I would have to move around. Just staying in one site does not appeal to me for more than that, unless I had a lot to do. I guess I could have hiked around, but frankly I'd had enough of that just getting to the site. I did miss camping by water. "Dead Frog Spring" did not count.

Oh and I hardly took any pictures. It was not convenient to have my camera out when hiking and/or it was raining. Eventually I will get one up of my campsite. The one picture in this report was stolen from the web (the fall colors aren’t quite that nice yet).

The Kickapoo is a premier paddling river. I encourage anyone to do a trip down it, and camp along its shores, or do like I did hike to a campsite. The hike-in sites range from about half a mile's hike to two miles. There are also vehicle-accessible sites, including the canoe-to sites. None of the sites have amenities other than a fire ring. Come prepared.