Dads and Daughters Do the Quetico Thing
by cptrea

Our seven day trip provided a half year of entertainment, if you figure that our Quetico adventure really began when our reservations were made back in January. The succeeding six months included countless trip planning sessions, the aquisition of gear, plenty of talking smack about which canoe would catch the most fish, and lots of enjoying the buildup to the actual trip. My 20 year fishing buddy Byron made a Quetico trip 15 years ago, but the rest of us were newbies to the northwoods. (All four of our party have fished, boated and canoed all our lives in Florida). During this six-month period I tried to get up to speed by buying books, spending time online (probably way too much time!) and by asking everyone I knew who’d been to this area for advice. The bad news about a six month planning period: I kept discovering more and more “must-have” fishing stuff, and I probably unpacked, added to, and repacked my bulging tackle bag a dozen times. When I confessed to daughter Elissa that the tackle bag had swelled to 15 pounds she noted: “My father is out of control”. Here’s what I ended up with for fishing gear for two anglers, five days on the water: 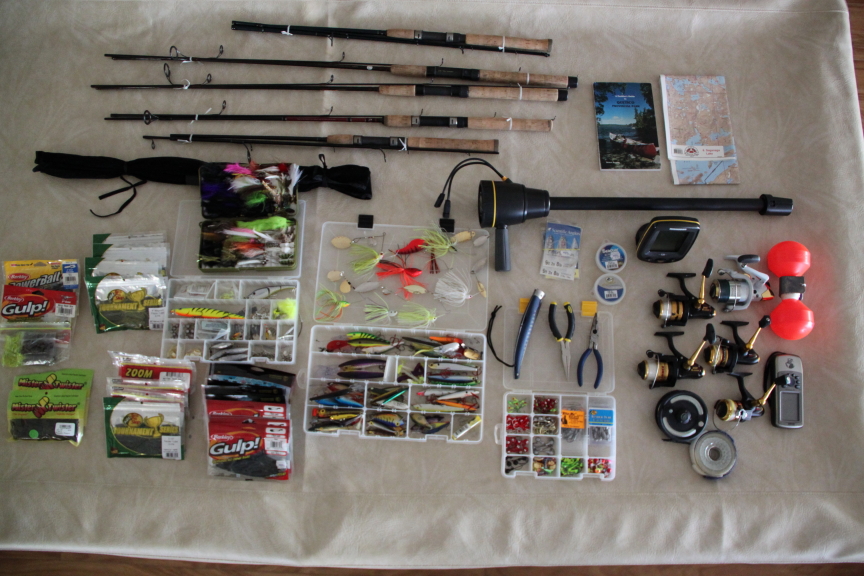 Sorry to disappoint the purists, but yes, I did include both a GPS and a depth sounder in our gear, both of which proved to be good additions. As a note, being novices and out-of-towners we opted for a full outfitting package, which we arranged through Seagull Outfitters on the Gunflint. Owner Debbie and her staff were extremely helpful from beginning to end, delivered everything as promised, and their outfitting package was well-designed and worked great. I would not hesitate to recommend their service to anyone. Debbie’s advice on campsites and fishing was excellent and her assistance in navigating the paperwork maze of RABC’s, Outdoor Cards, Entry Permits, I-68’s, etc. required for the trip was invaluable.

The official “Day One” of our vacation began on Monday July 11 with a predawn flight out of SW Florida and included about the amount of airport/airline hassles you’d expect on a three-leg flight. We picked up a rental car in Duluth and drove through Grand Marais on our way to Seagull Outfitters, arriving late afternoon. When we arrived we were given a warm welcome and we found that our pre-shipped gear had been neatly stowed in our bunkhouse room and was waiting for us in good order. Seagull staff gave us a very thorough trip orientation after which we went out to dinner, during which the extremely important side bets on the fishing were finalized, then returned to the bunkhouse and spent the evening unpacking our gear and distributing our stuff into the Duluth packs provided by Seagull. At first this was very entertaining, but the ominous swelling of the Duluth packs was a little disquieting and members of our group would occasionally hoist a pack to check it’s weight. Nobody dared to voice it, but those packs were packed! Just prior to bedtime Elissa unveiled her surprise: she’d had t-shirts made up as prizes for our informal fishing tournament. One set for the Champion Team, and another for the Runner-ups, and suddenly the stakes for our two-team fishing tournament were much higher! We hit our bunks with visions of the bent poles and stretched strings we’d soon be experiencing.