Monsoons and Wind on Horseshoe
by WhereRwe

Trip Type: Paddling Canoe
Entry Date: 07/20/2011
Entry & Exit Point: Lizz and Swamp Lakes (EP 47)
Number of Days: 4
Group Size: 7
Trip Introduction:
My wife's parents, aunt and uncle and 17 year old cousin came up from Missouri to join us on our yearly trip to the BWCA.
Discuss Trip: View Discussion Thread (8 messages)
Day 1 of 4
Wednesday, July 20, 2011 Our group was staying at Rockwood with Mike and Lynn, prior to our departure this morning. We where awaken by a very loud and very close "CLAP" of thunder around 3:30 AM this morning. 6 hours later, around 9:00 AM the rain and wind finally subsided enough for our group to venture out on Popular. The original plan was to be on the water by no later then 8:00 AM. What's that saying about the best laid plans go by the way side when you are dealing with Mother Nature? All said and done Mike informed us that around 6" of rain had fallen in only 4 or 5 hours. Rockwoods' road was washed out in several areas and several small fishing boats where close to being at the bottom of Poplar Lake. After this Monsoon of a rain, around 9:30 AM or so we pushed off from Rockwood. Our trip had started. There was still a pretty substantial wind coming at us so we did not make the best of time crossing Poplar. The first portage into Lizz from Poplar was flooded, due to all the rain. I could tell by water marks on the boulders at this portage that Poplar was at least 2-3 inches higher then it was prior to all the recent rain. Everyone unloaded and we where on our way. The portage from Poplar to Lizz was flat without many rocks or roots to trip you up, with a nice and easy put in on Lizz. Half way through Lizz is where the BWCA Boundary starts.  Lizz is a small narrow lake and was paddled very quickly. The take out on Lizz I am sure is easy in normal water levels as it is very flat with little to no boulders. We experienced a very flooded take out on our trip, with water from the lake creeping well up the portage, much further then the natural shore of the lake. We continued on through Caribou with relative ease. The wind was letting up.  Once on Horseshoe it was becoming apparent that we where ready to stop and set up camp. We settled on Campsite 673 to call home. It was decided that this trip would be a base camp trip as several members of our group where experiencing aches and pains from muscles they forgot they had. Everyone was fine with this decision, we where in the BDUB!  Campsite 673 was large enough to accommodate three tents and suited our needs fairly well. This said, however a good bear bag tree was hard to find, but after about 3 hours we had the pantry rigged up and in place. While the men of the group where figuring the bear bag out, the woman where kind enough to set up camp. At this point we where set up, Now it was time to make dinner. 6:00 PM Shortly after getting the food out and setting up the kitchen, the second wave of monsoons of the day came through. We cooked dinner under the rain fly and retired early. 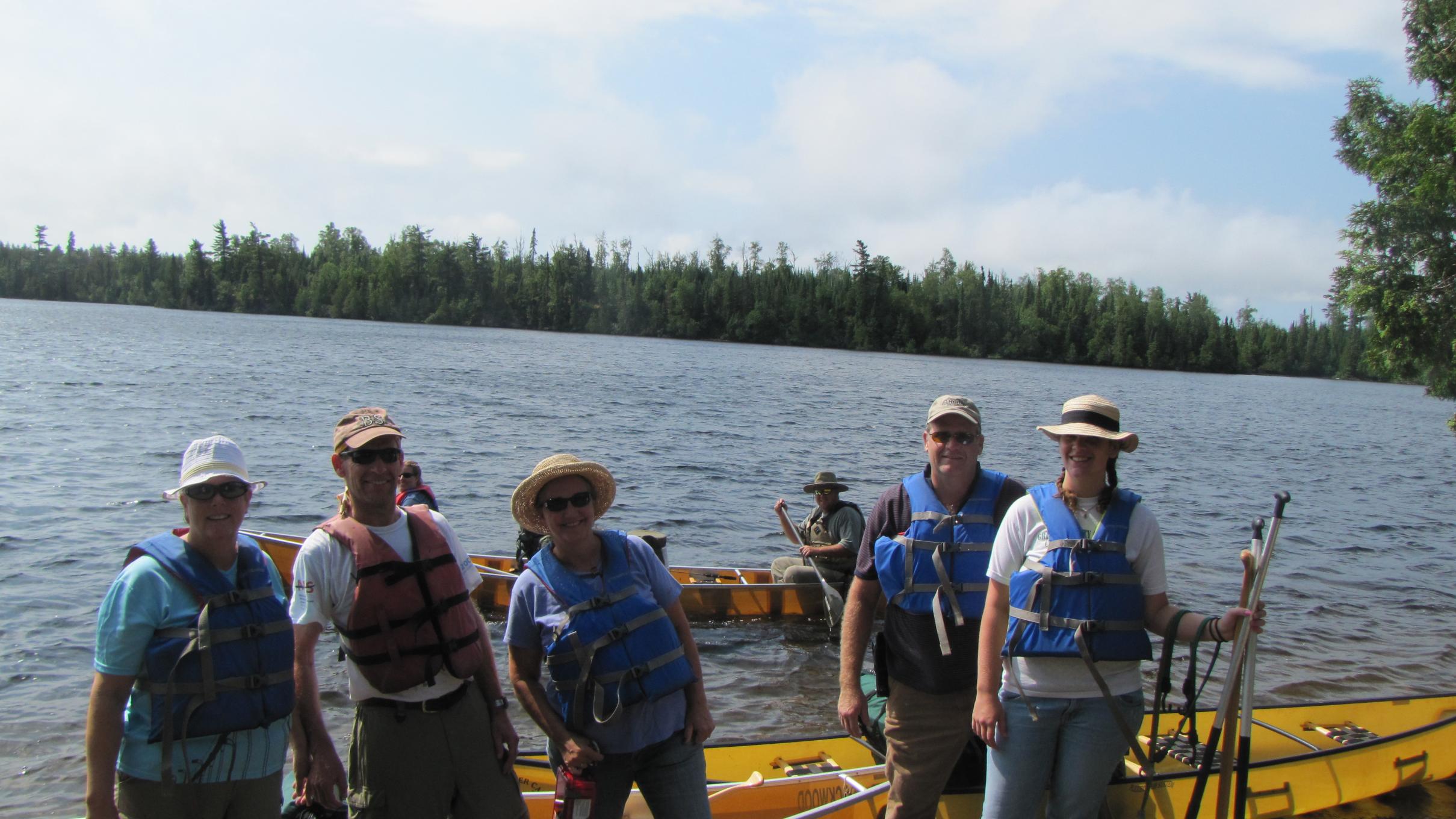 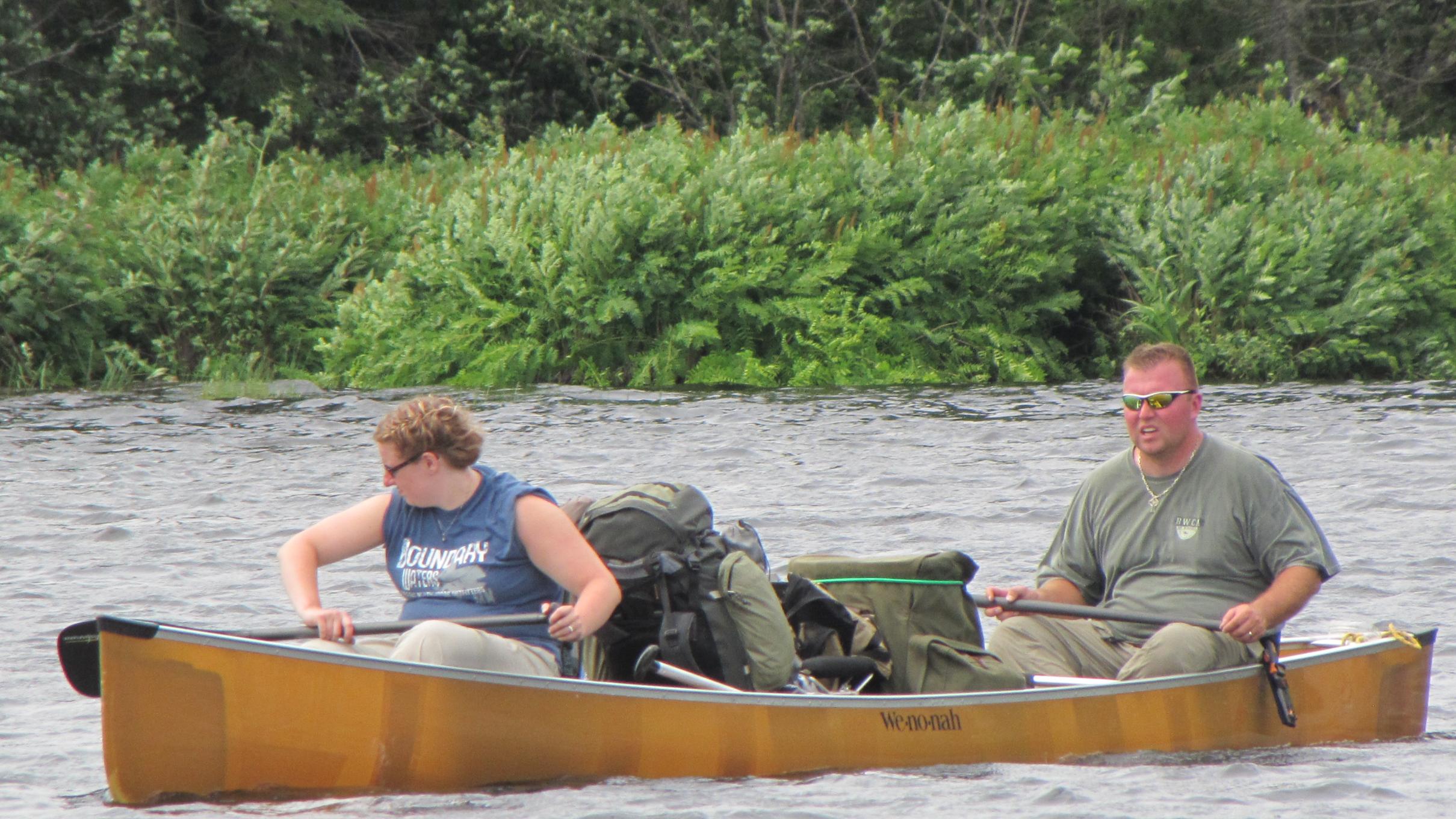