Trip Type: Paddling Canoe
Entry Date: 09/02/2011
Entry & Exit Point: Quetico
Number of Days: 8
Group Size: 4
Trip Introduction:
Have been going to Q & BW since 1977 - Ralphy (canoeing partner) and I decided to bring along a couple of newbies this time
Discuss Trip: View Discussion Thread (5 messages)
Report
Hi everyone! Newbie to the board, but not the Q & BW. Was introduced to the Q in 1977 (or was it 1978 - hate getting old) through Holy Cross High School outside Chicago. Here's where I bonded with my life-long friend Ralphy - our appreciation of this part of the world has brought us back a dozen times over the past 33+ years.

This time, we decided to bring along two guys new to the Q, as well as to canoeing. Mixed results from the newbies, but Ralphy and I had our best trip ever. RRod and I flew in from San Diego, while Ralphy and DJ drove up from Chicago, picking us up at International Falls. Drove to Morris Camp in Atikokan where Moose Mulcahey has been taking care of us for over 30 years.

Trip lasted 8 days, with put-in at Stanton Bay on Friday 9/02. Weather was great, especially in light of the fact that thunderstorms had just rolled through the area the past couple days. After an hour or so of paddling, DJ mentions that his back is giving him problems - oh, oh. He toughs it out until we reach our first portage (about another hour), when we see the problem - he isn't using the padded canoe chair with back support. Unfortunately, the damage is done - he'll have back problems for the rest of the trip. Couple of short portages and we're into Dore' Lake for our first night. Unbelievably, both our first and second choice campsites are taken - never happened before and I get concerned that maybe starting our trip on Labor Day weekend was a bad idea. Uneventful dinner, followed by some heavy dozing (at least for me).

Next morning I awake to water on the boil, with oatmeal on the breakfast menu. DJ wakes up and is having more problems with his back. Turns out he was sleeping without a sleeping pad (sheepishly tells us he left it in his wife's car back in Chicago) - his back is not going to get any better at this pace. We break camp and head off to the Deux Riviere portage, followed by the "river" itself. Portage is actually easier than I remebered it. As luck would have it, the Deux is slightly better than a swamp - lowest levels Ralphy and I have ever seen. Beaver dams were manageable, although RRod almost fell in backwards off of one. We ended up half-paddling, half-pushing through the Deux for eternity (although it probably wasn't more than an hour or so). Just what DJ's back needed! Most memorable part of this stretch (aside from the misery) is the look on RRod's face when we told him to be aware of leeches - all had a good laugh at his expense!

Finally got into the northern reaches of Sturgeon Lake, where a long-needed lunch was taken. Some discussion about shortening the second day's paddle (in light of the beating we took on the Deux and DJ's worsening condition), but we ended up sticking to our schedule and reached Chatterton Falls by late afternoon. We managed to snag our favorite campsite on the northern tip of the falls. The western wind was howling and it made for an uneasy ride for the newbies. Fortunately, we landed without taking on any water. Set up camp and had to use our tarps as windscreens - otherwise, the tents would be at 45* angle all night. Dinner consisted of Mac & Cheese and DJ was able to use our canoe chairs as a make-shift sleeping pad. We were going to basecamp here for 3 nights to allow DJ a break, as well as finally putting rods in the water.

Next morning woke up to a cold front, with a slight mist (this was the only "rain" we got on this trip). The wind was still howling, so instead of fishing below the falls (in canoes)as we've done in the past, we hiked to the top of the falls and did some shore fishing. Within 30 minutes, we had two keeper walleyes and caught and released a number of smaller ones, plus the usual smallmouth and pesky northerns. Hiked back to camp with our lunch in tow just in time to feel the wind die down. 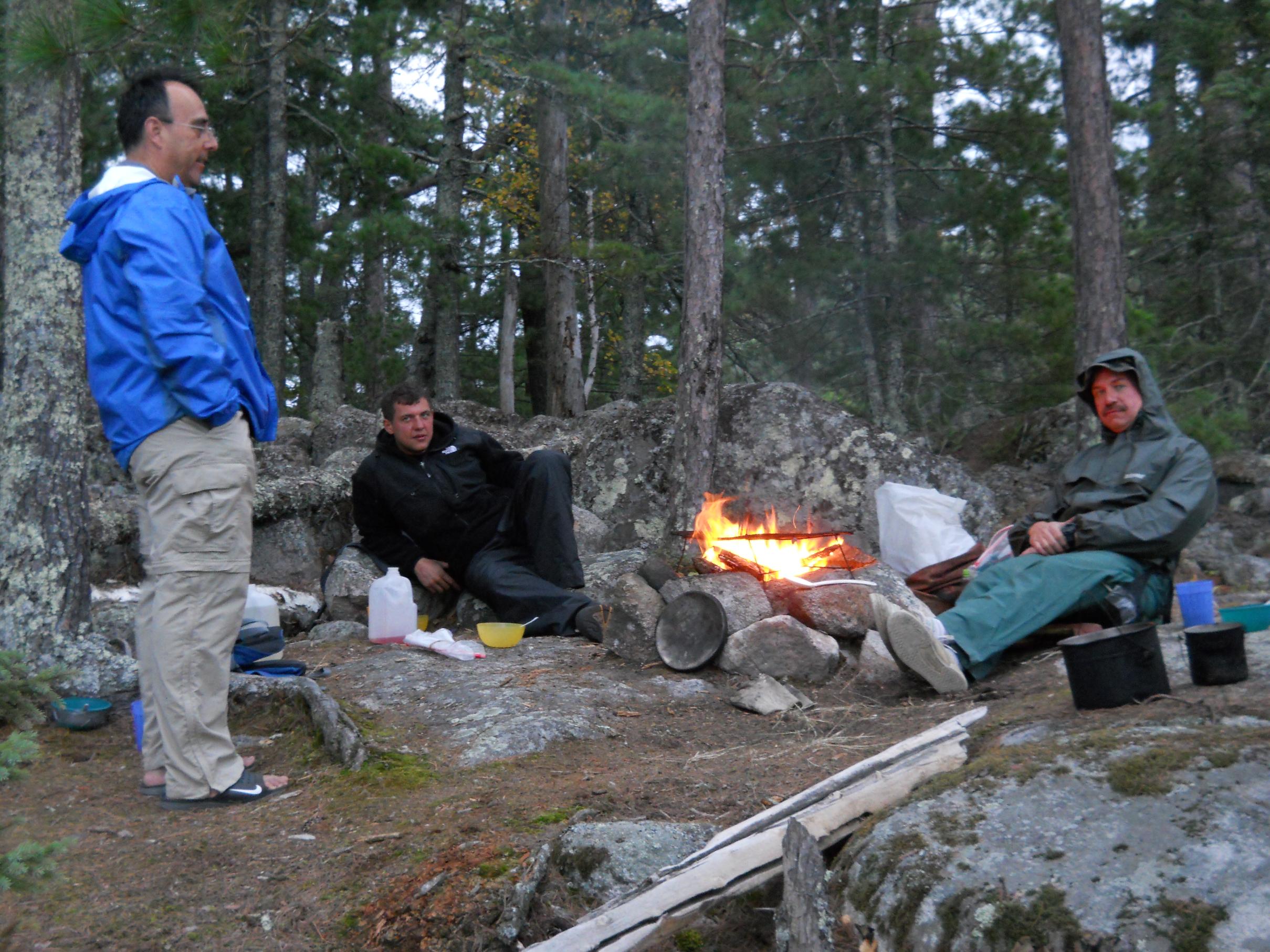 Finally - time to relax! Walleye were fantastic and it was good to be able to lounge around for the rest of the day. Thankfully, the cold snap took care of any mosquito and fly activity. Dinner of Beef Stronganoff and a great sunset to end the day: 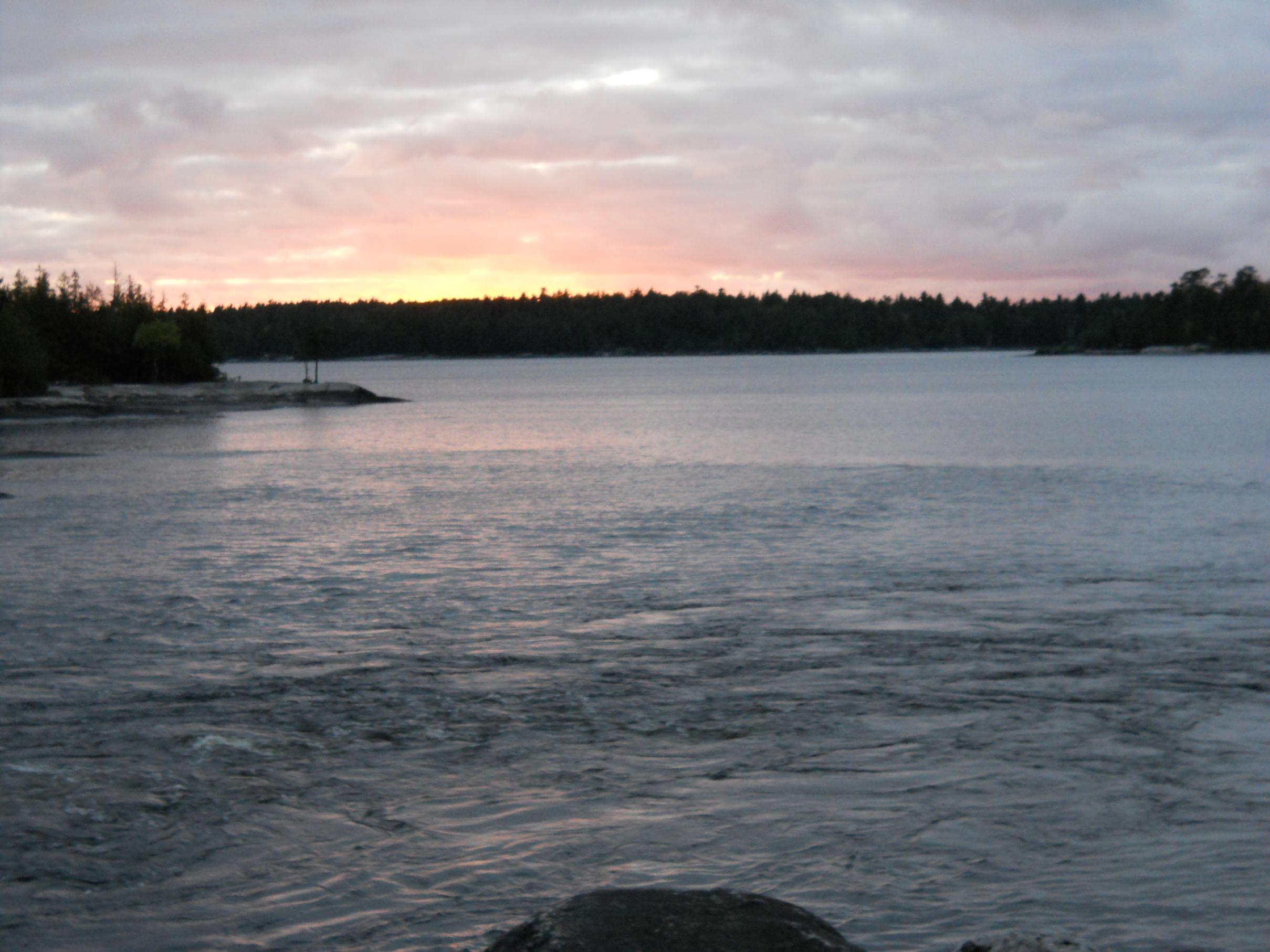 After a good night's sleep (without the howling wind), we awoke to a chilly morning that provided a nice photo opp: 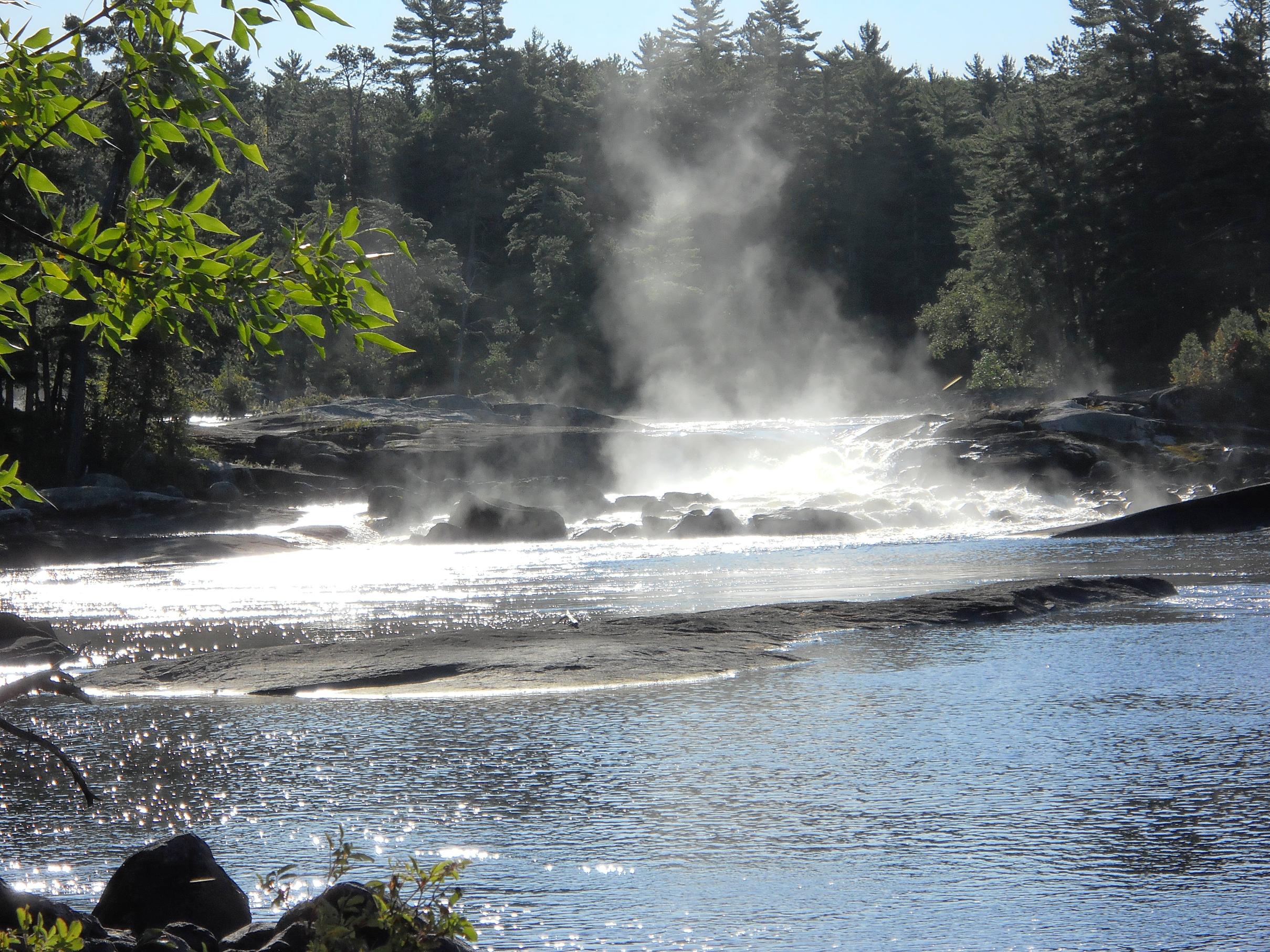 More fishing gave us both a lunch and dinner of walleye and some good northern pike action to the south and northwest of the falls. Couple of northern were 36+" and made for some "reel" excitement (pun intended). 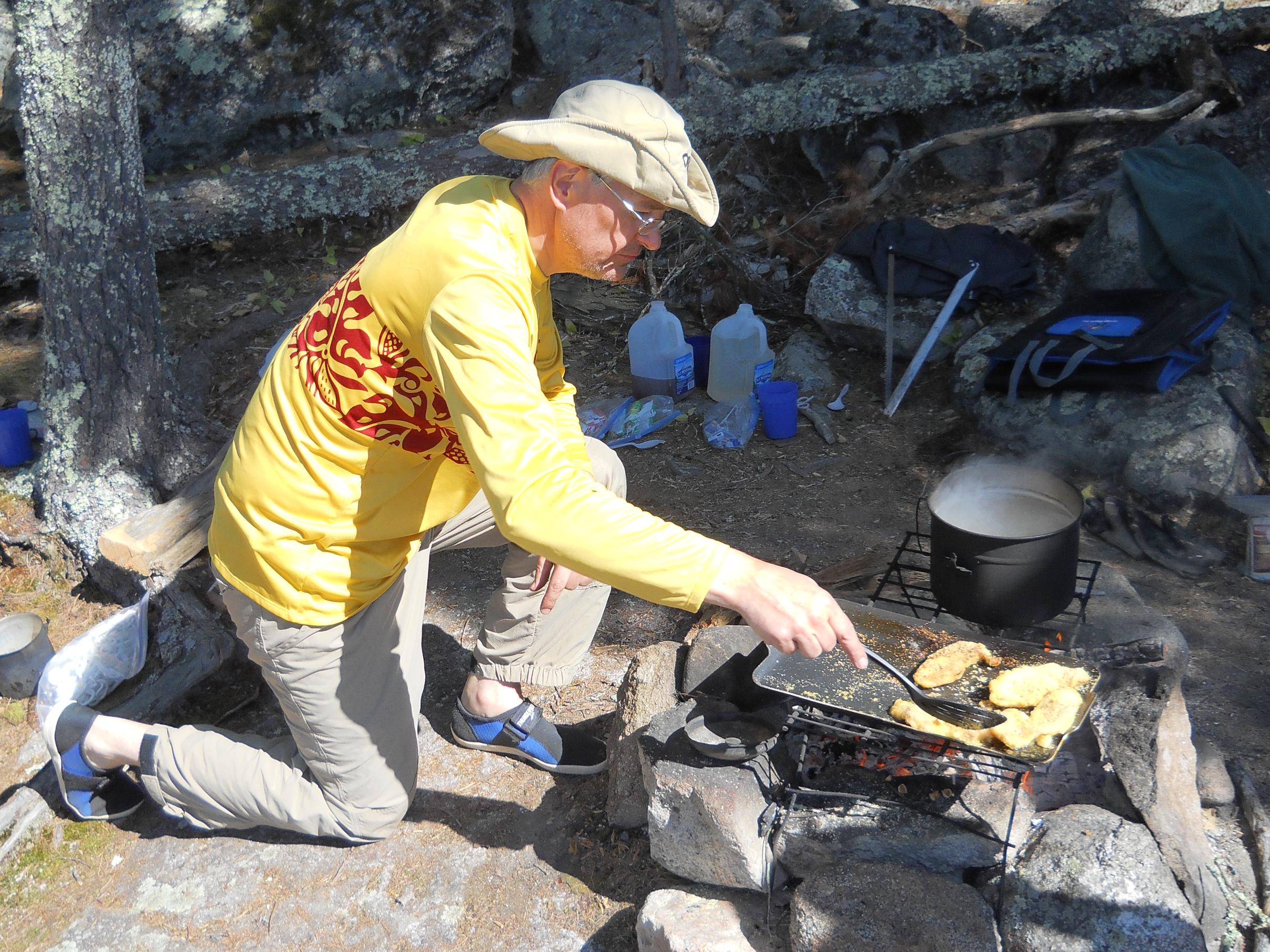 The next day we woke up to a beautiful, windless morning. In deference to DJ's back, we altered our route to loop back to Stanton through Oliphaunt-Fern-Bud-Beg-Bisk-Pickerel instead of Sturgeon-Lonely-Walter-Batchewaung with a pick-up at Nym. This shaved at least a half-day of paddling. As this was our first trip with a satellite phone, it was kind of odd to call Moose Mulcahey (Morris Camp in Atikokan) from the middle of the Q to change our pick-up point. I still have mixed feelings about bringing a phone, but in this instance, it was definitely good to have it along. I notice that DJ is soothing his sore back by hitting the food pack hard.

With no wind in our face, we left Chatterton Falls and headed up Russell to Sturgeon Lake. Decided to pass up Blueberry Island (great campsite, though I'm sure it's overused) and pushed further up Sturgeon for a relatively easy travel day. Made another island camp and relaxed. RRod (ex-Navy) takes to the water like a fish - overdue bath??? 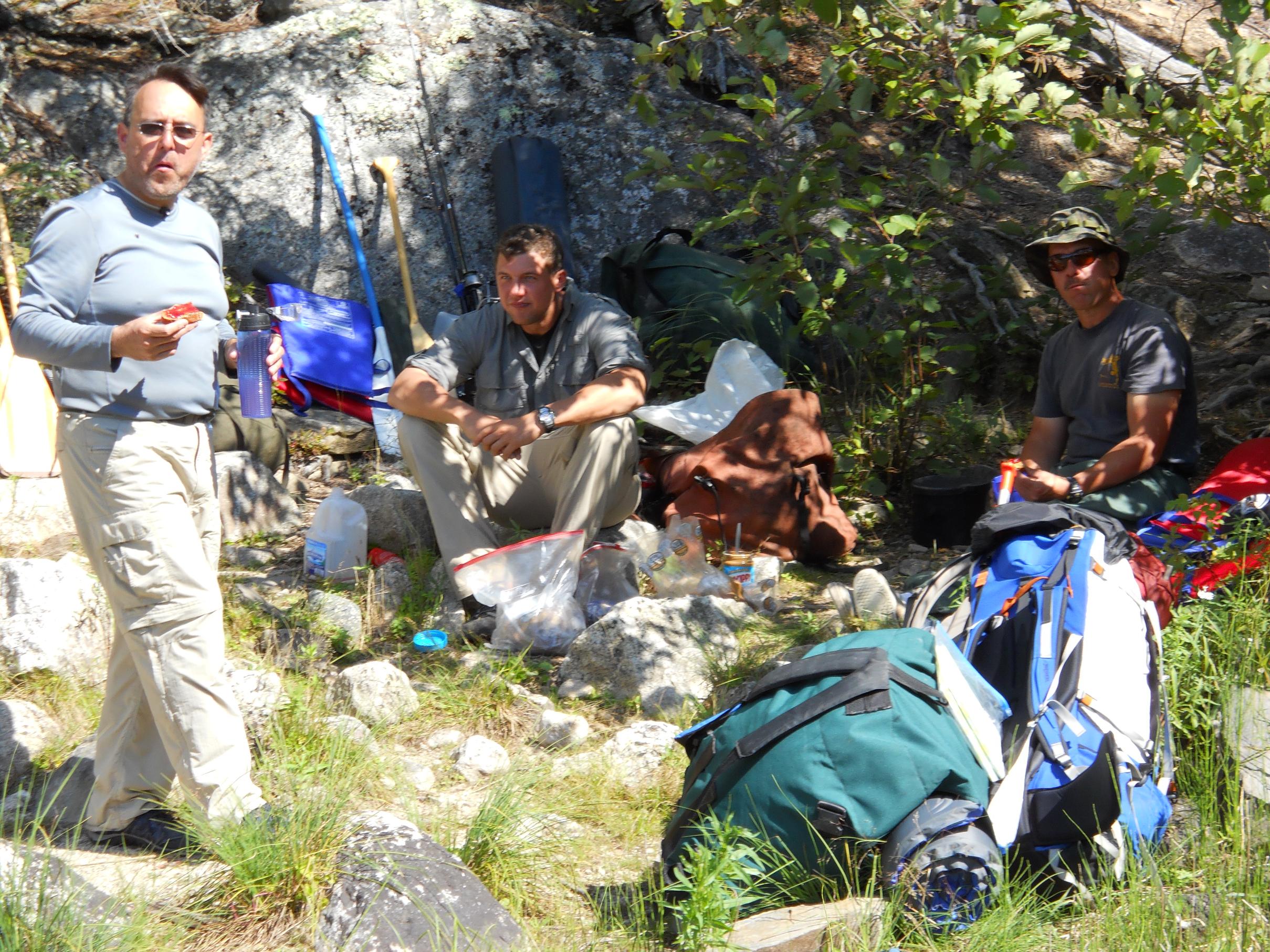 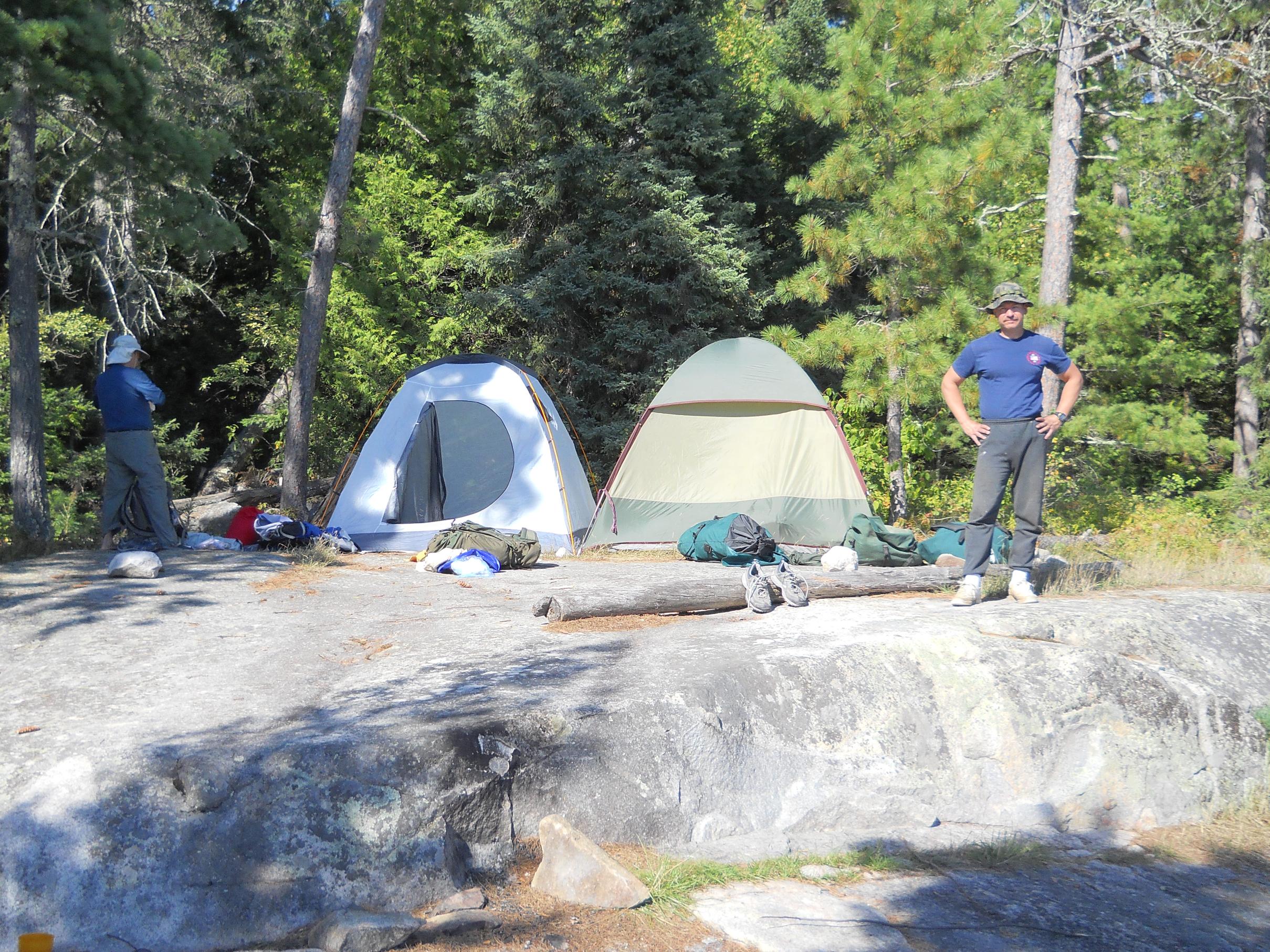 Non-eventful evening of hot chocolate and star-gazing brought about a restful sleep. Next morning we packed-up and headed eastward via Oliphaunt to Fern Lake where, despite an unfortunate detour (whoops, wrong turn), we arrived to find our first choice campsite occupied. Luckily, the next island in Fern was available and we hit it in the late afternoon. Saw an interesting sight on the portage around the rapids between Oliphaunt and Fern - a green royalex canoe wrapped around a good-sized boulder mid-way through the hike. Hope whoever was unfortunate enough to experience this was OK. 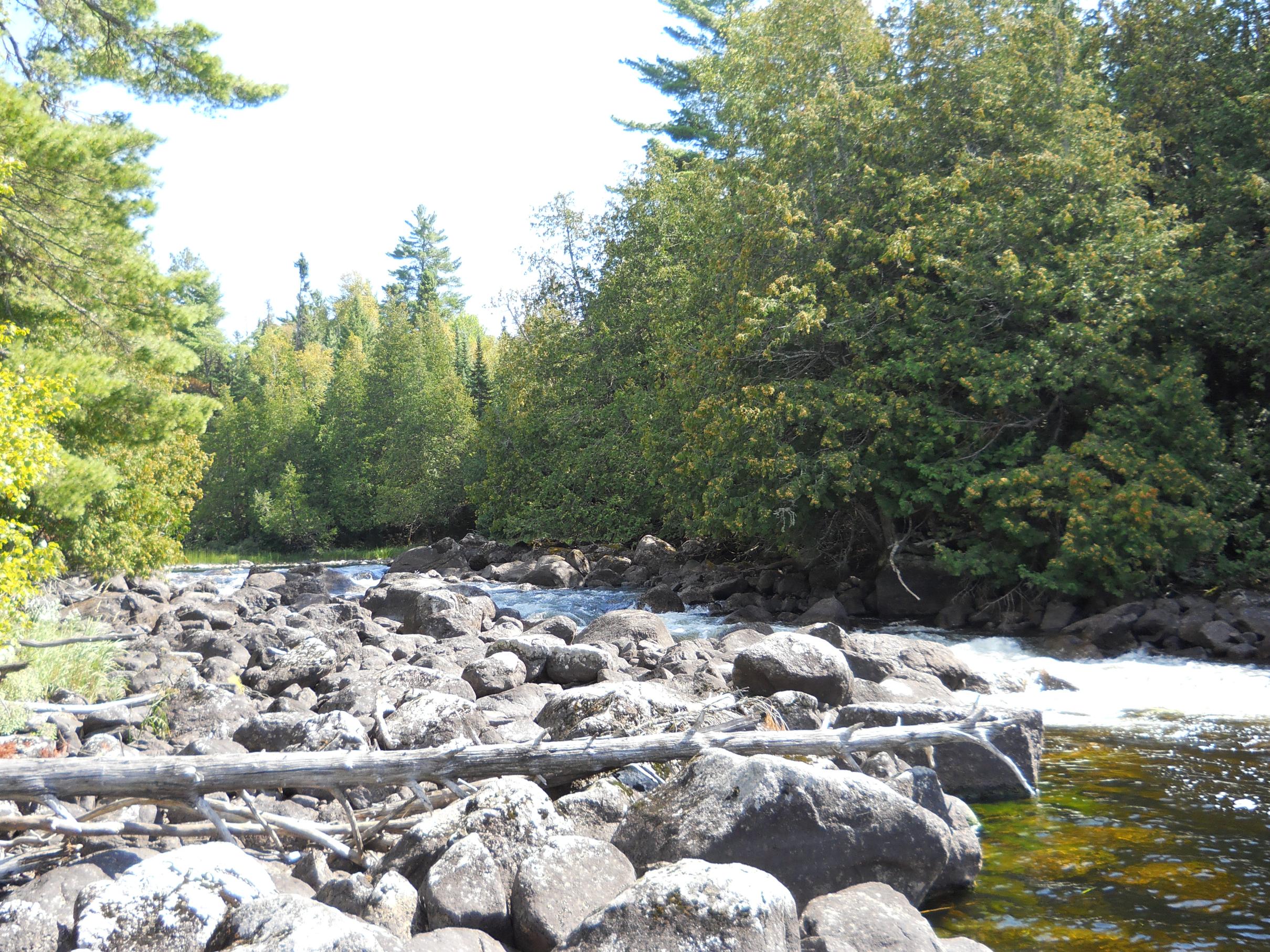 Campsite on Fern's eastern island was fantastic, with a great fire-ring. Thanks to the previous voyageurs for setting this up! Note to self: next trip bring more Nature Valley Chewy Trail Mix - really hit the spot.

A little smallmouth fishing followed by some photo opps on a calm, sunny afternoon/evening. 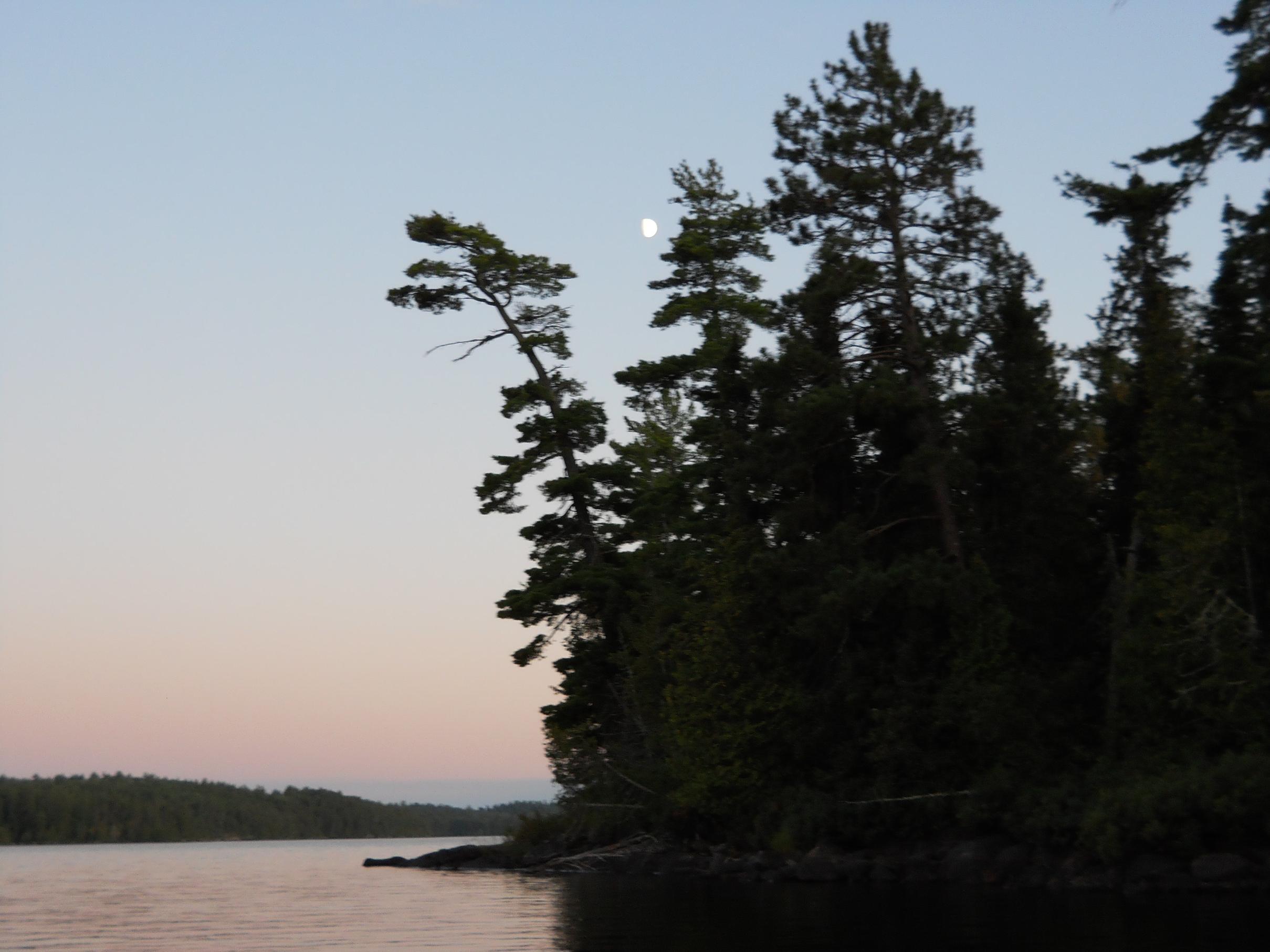 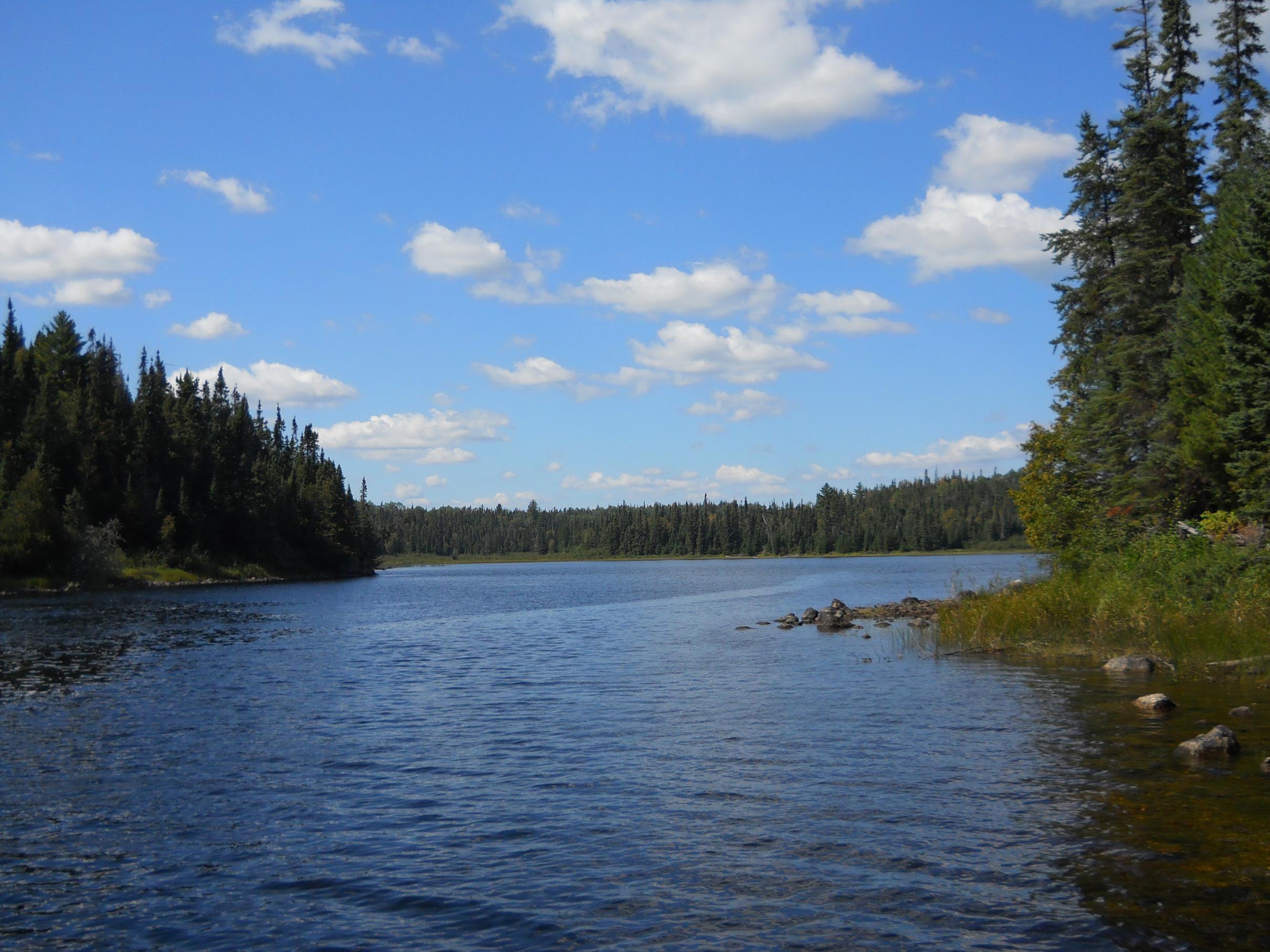 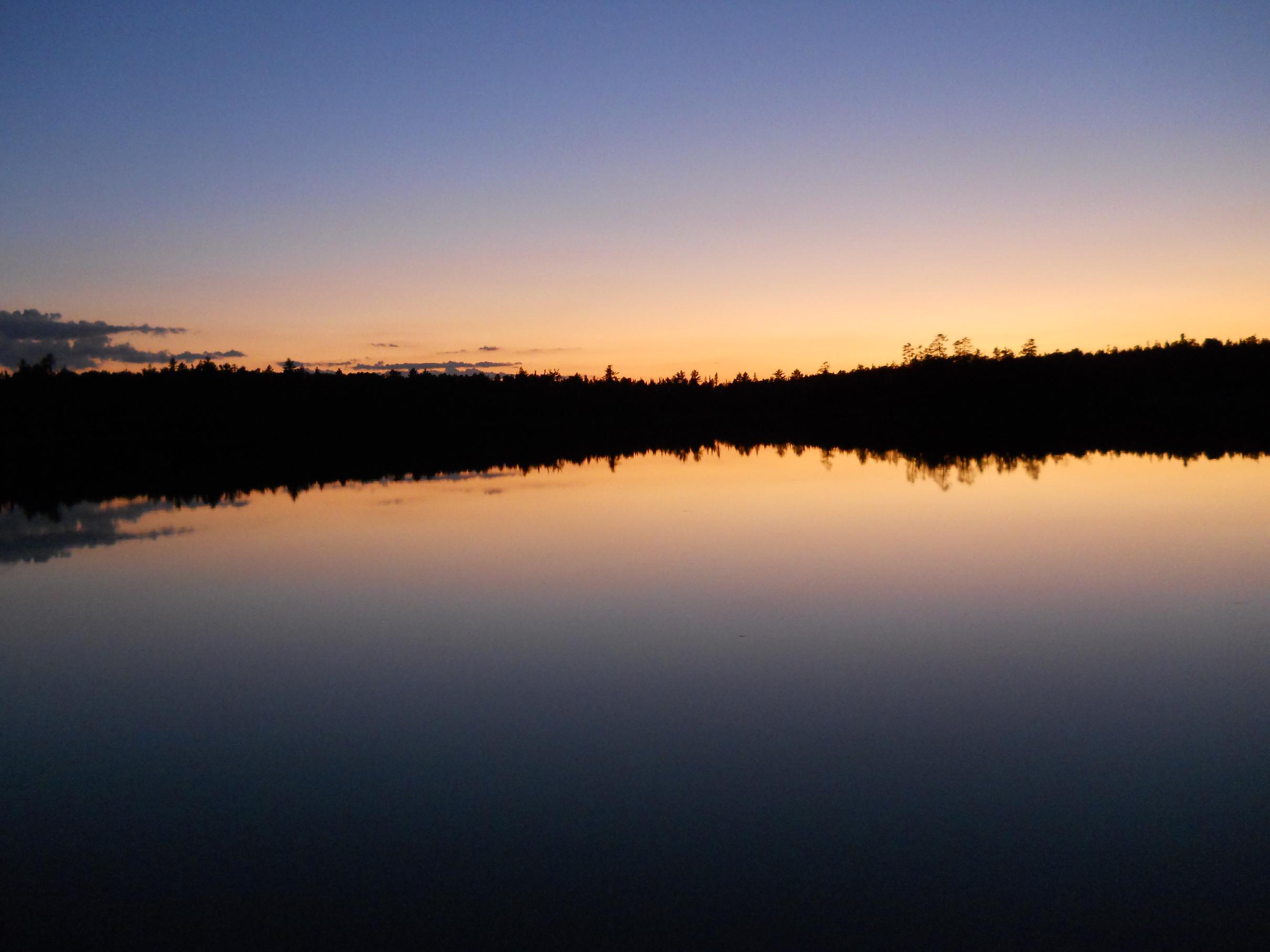 Broke camp with scrambled eggs with bacon (first & last time we bring these along), followed by a push up the small rapis leading out from Fern. Through the "B" Lakes (took on some water going up the last set of rapids), until we hit the final portage of the day - this let us out at the dam on Pickerel. A quick PBJ lunch and we dip our paddles into Pickerel for the last hour's paddle to our campsite. Luckily unoccupied, this large site gives us space to spread out and enjoy the seventh consecutive day of rainless weather - unbelievable! DJ toughs-out another day on the Q - though I still hear plenty of cussing.

Ralphy and I head out for our last bit of fishing for the trip. I had earlier sonared around our island campsite for good-looking spots. Came back to one of the hot spots and landed a nice-sized smallie for dinner. Nabbed a few nuisance smallies and a couple of 24" northern. As it appeared that smallie fillets were all that were going to hit the frying pan, Ralphy hooks into a beautiful walleye (26") on his next-to-last cast. Now that's the way to end a Quetico fishing trip! 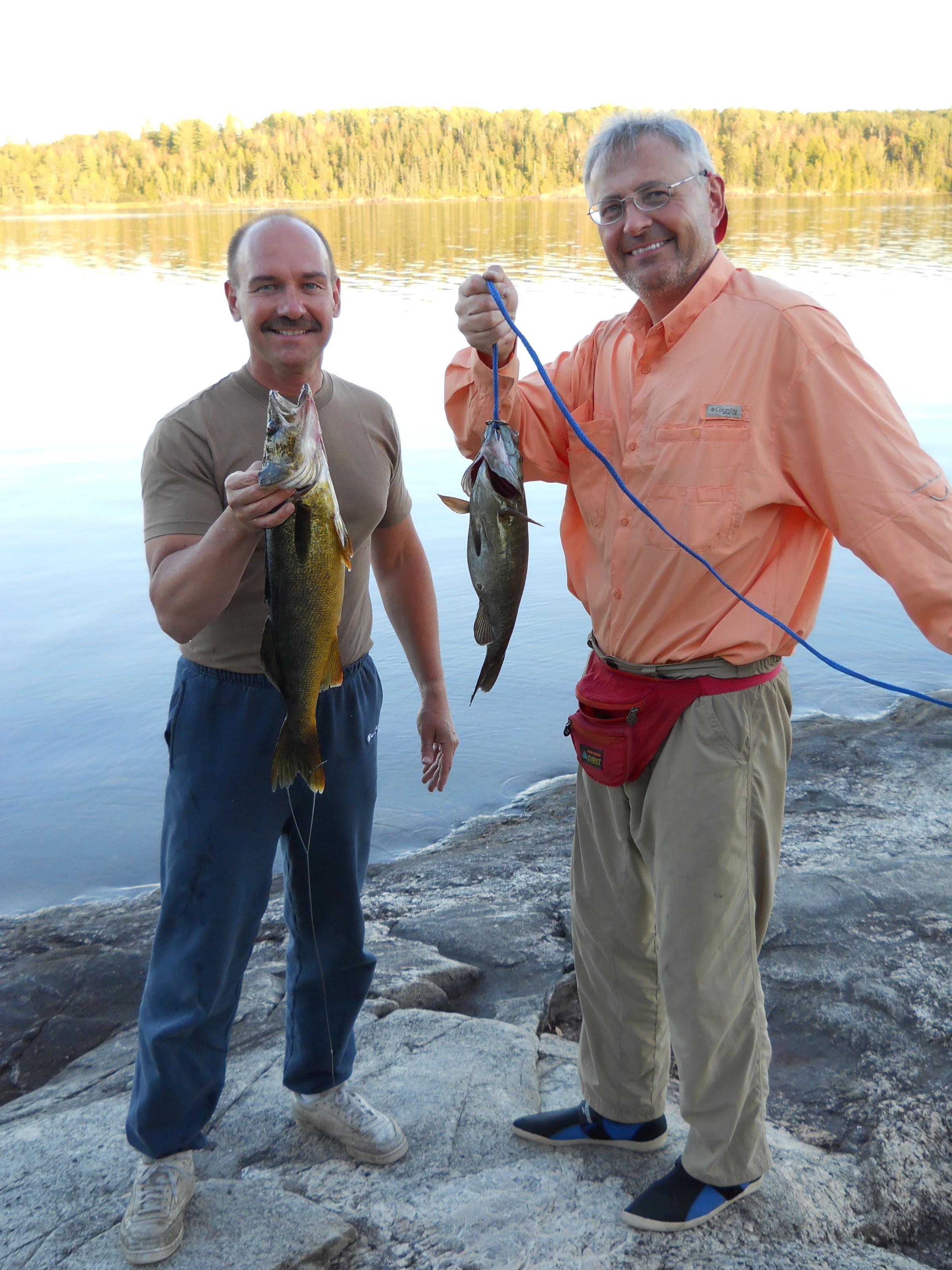 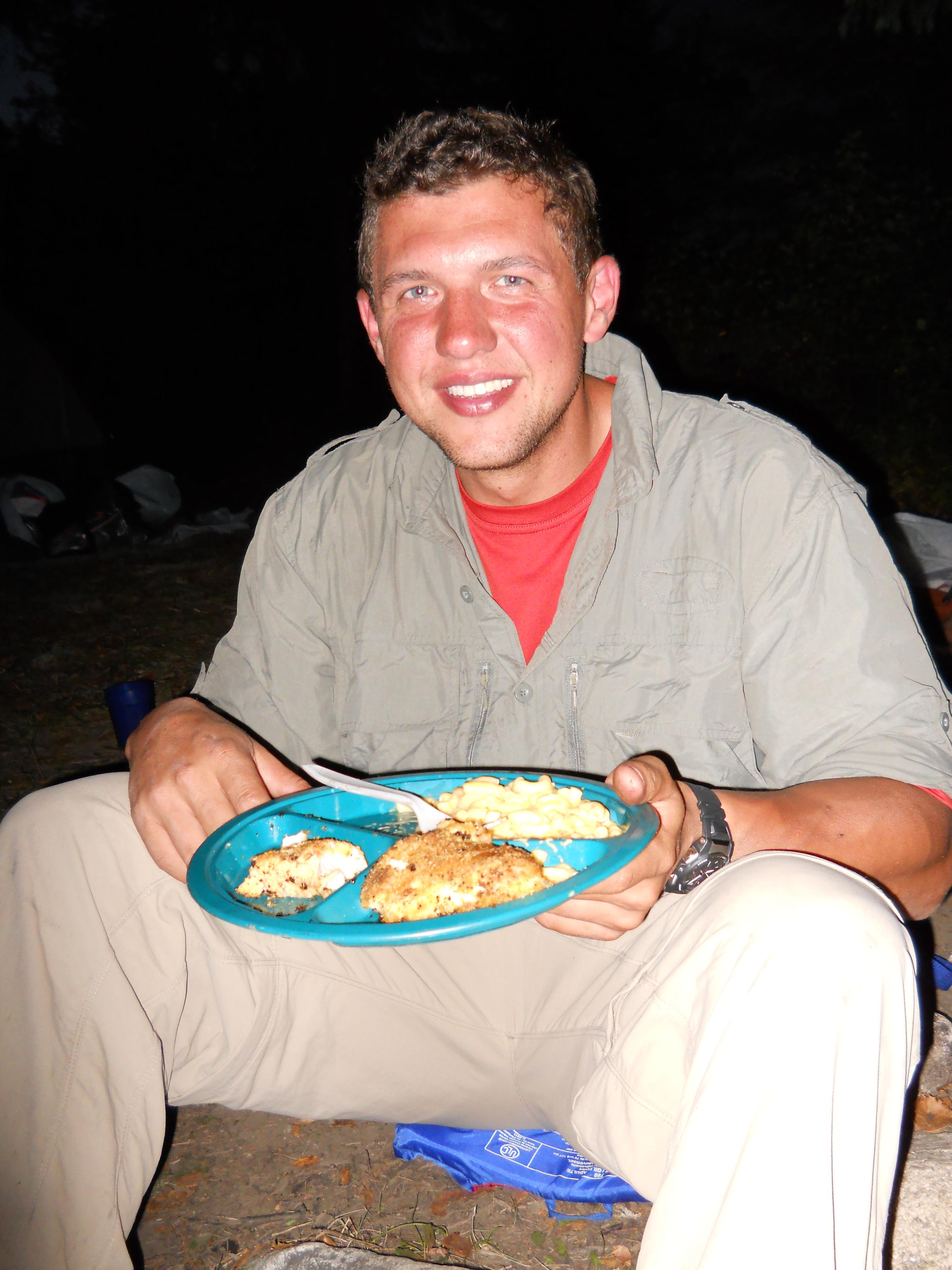 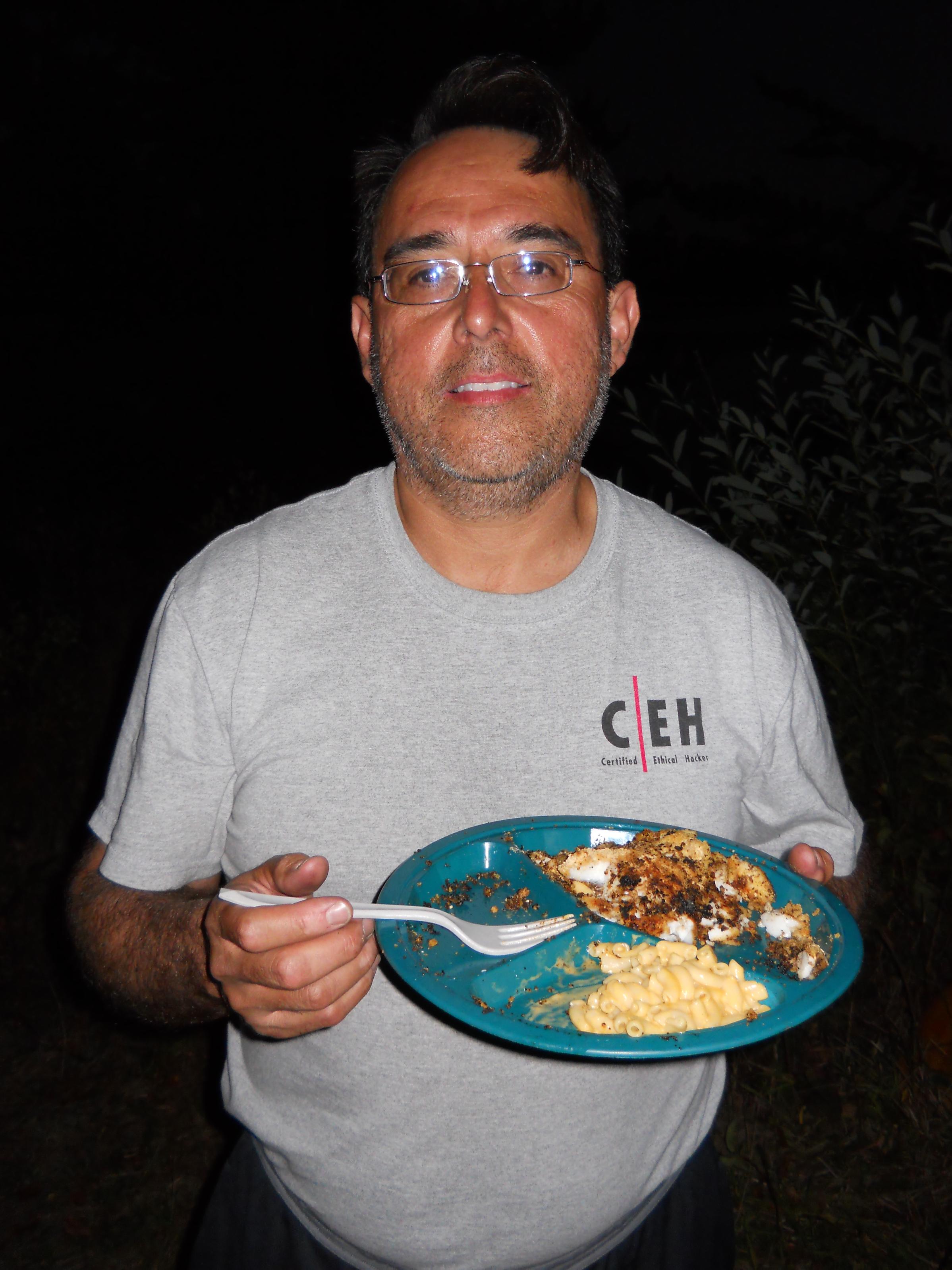 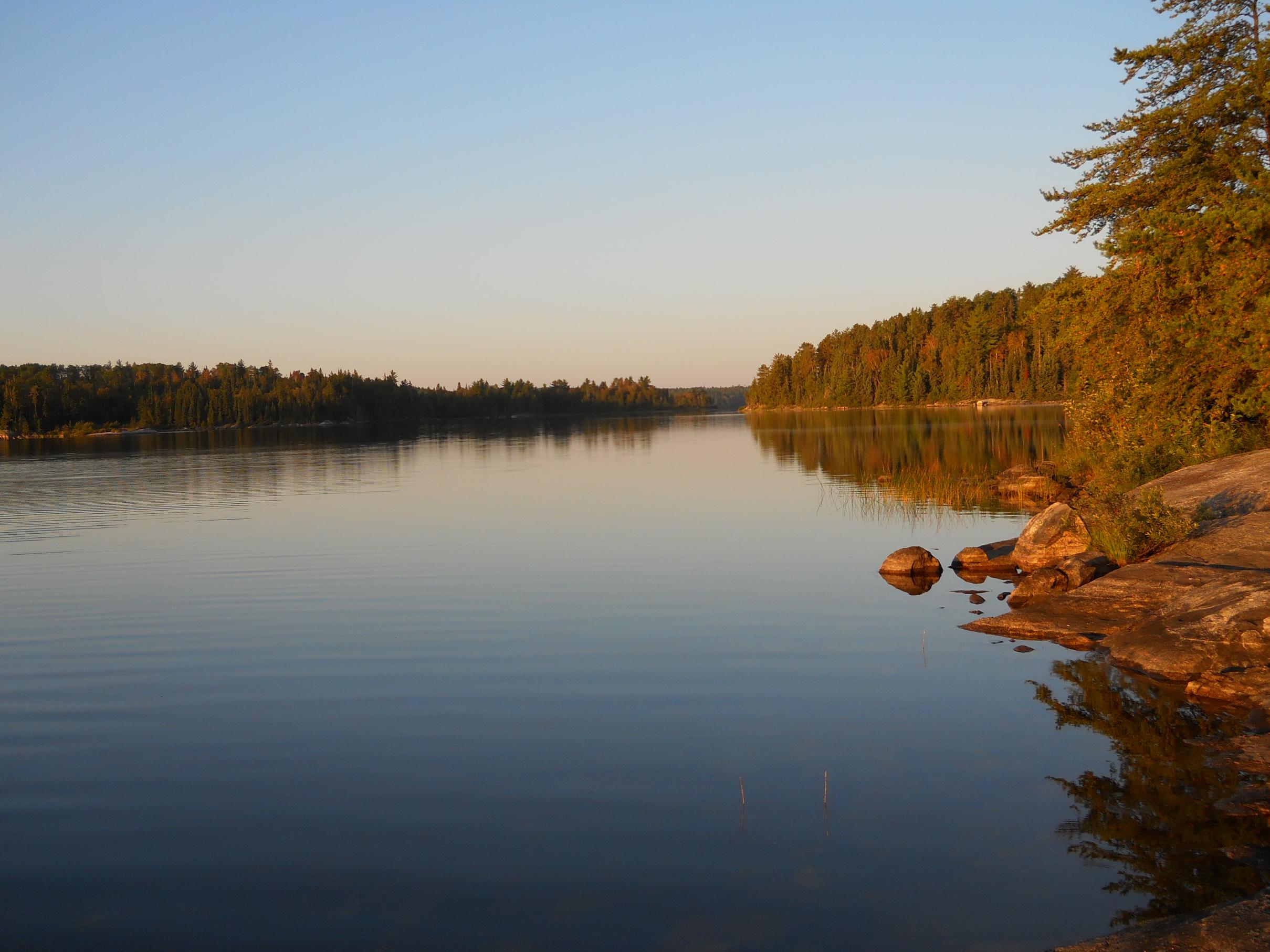 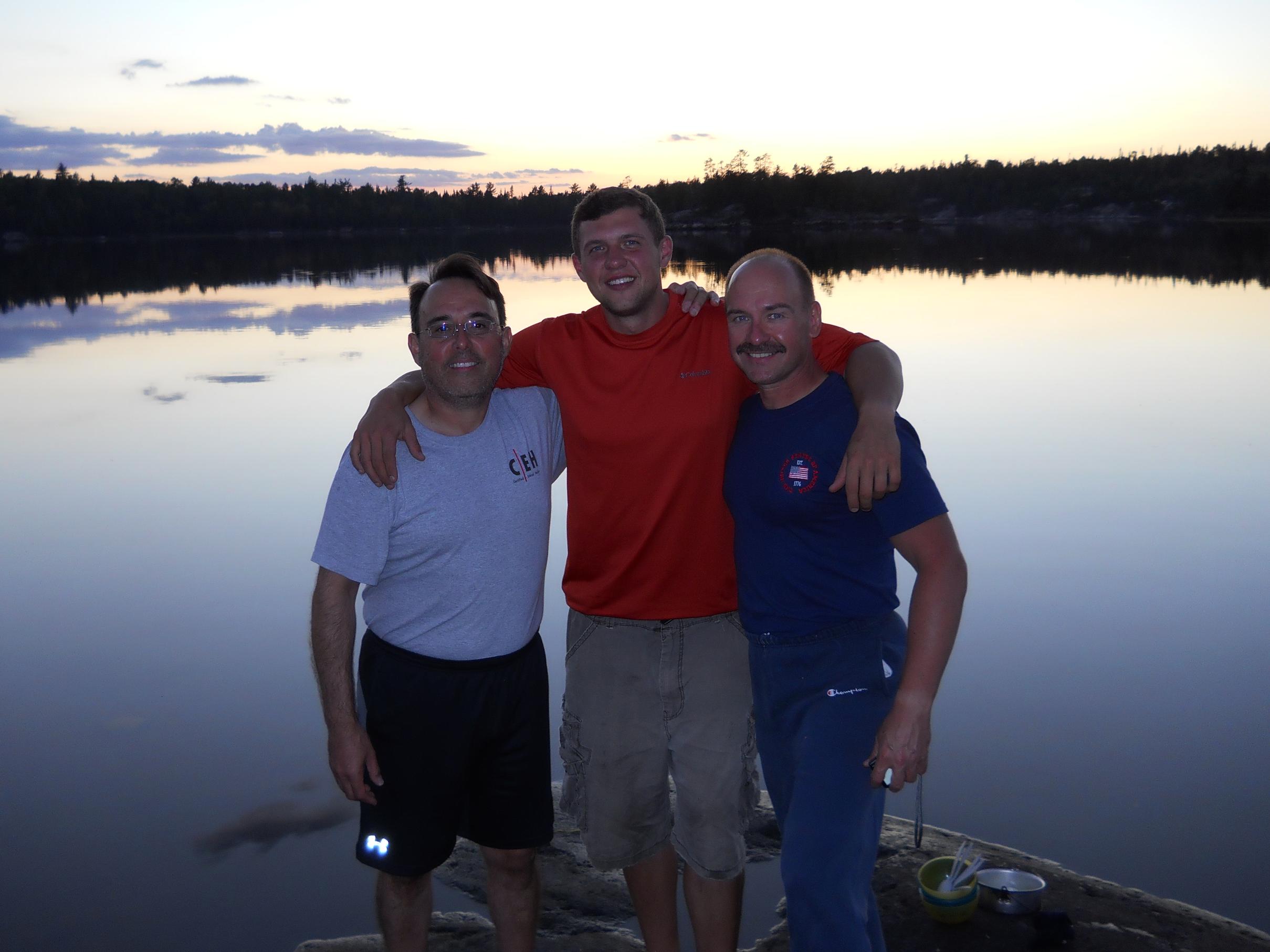 Next morning we finished up the last of our food rations (first time we actually were spot-on in our food estimates), broke camp and loaded up the canoes. What we saw before us was hard to beleive: a glassy-smooth Pickerel Lake. What luck! There is always a wind on Pickerel, and I know this sounds impossible, but that wind is always straight in your face. No headwind; hardly a breeze at all - wow! For the non-believers, I managed to snap a few photos before we entered Stanton Bay for our pick-up. 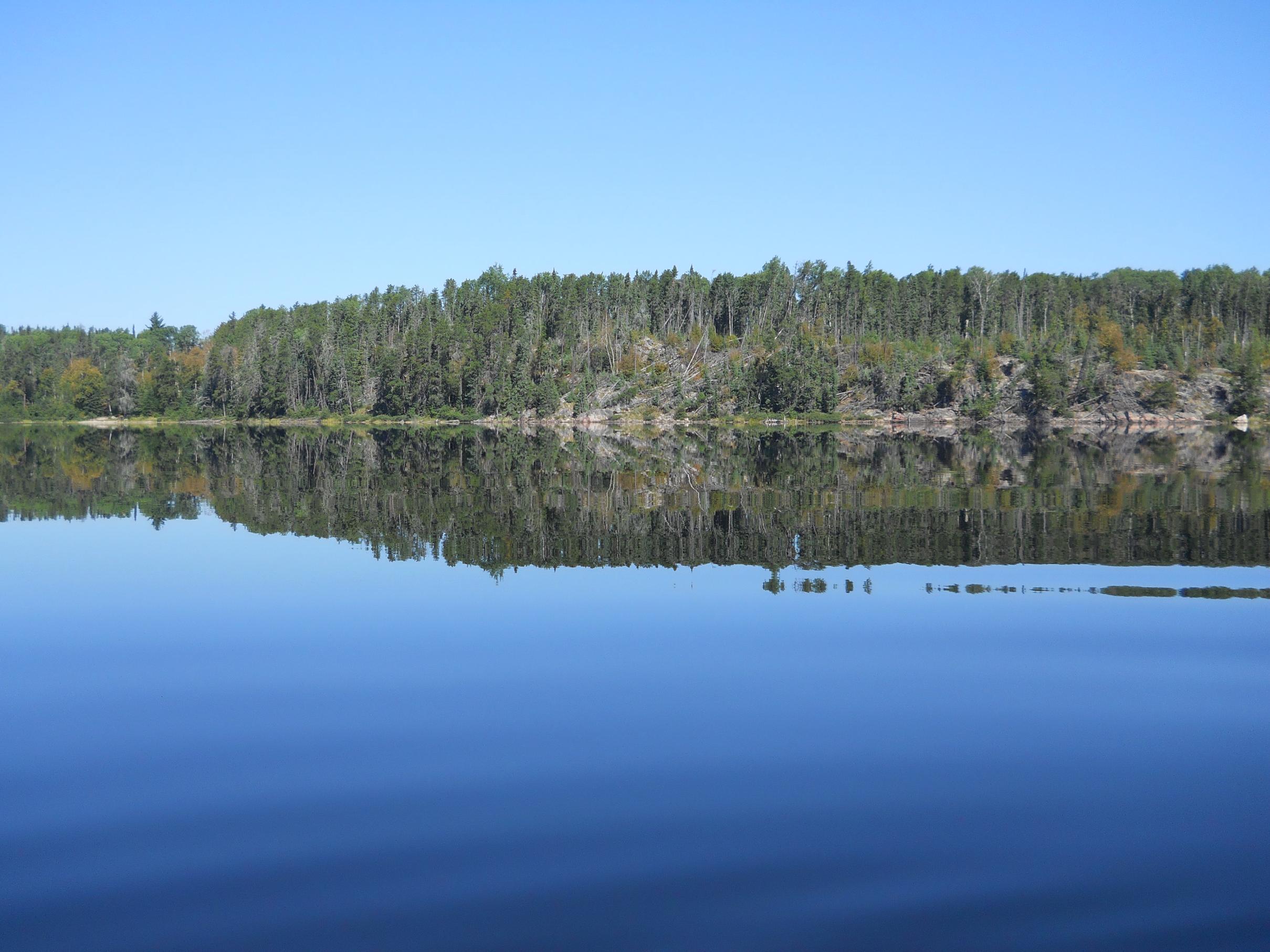 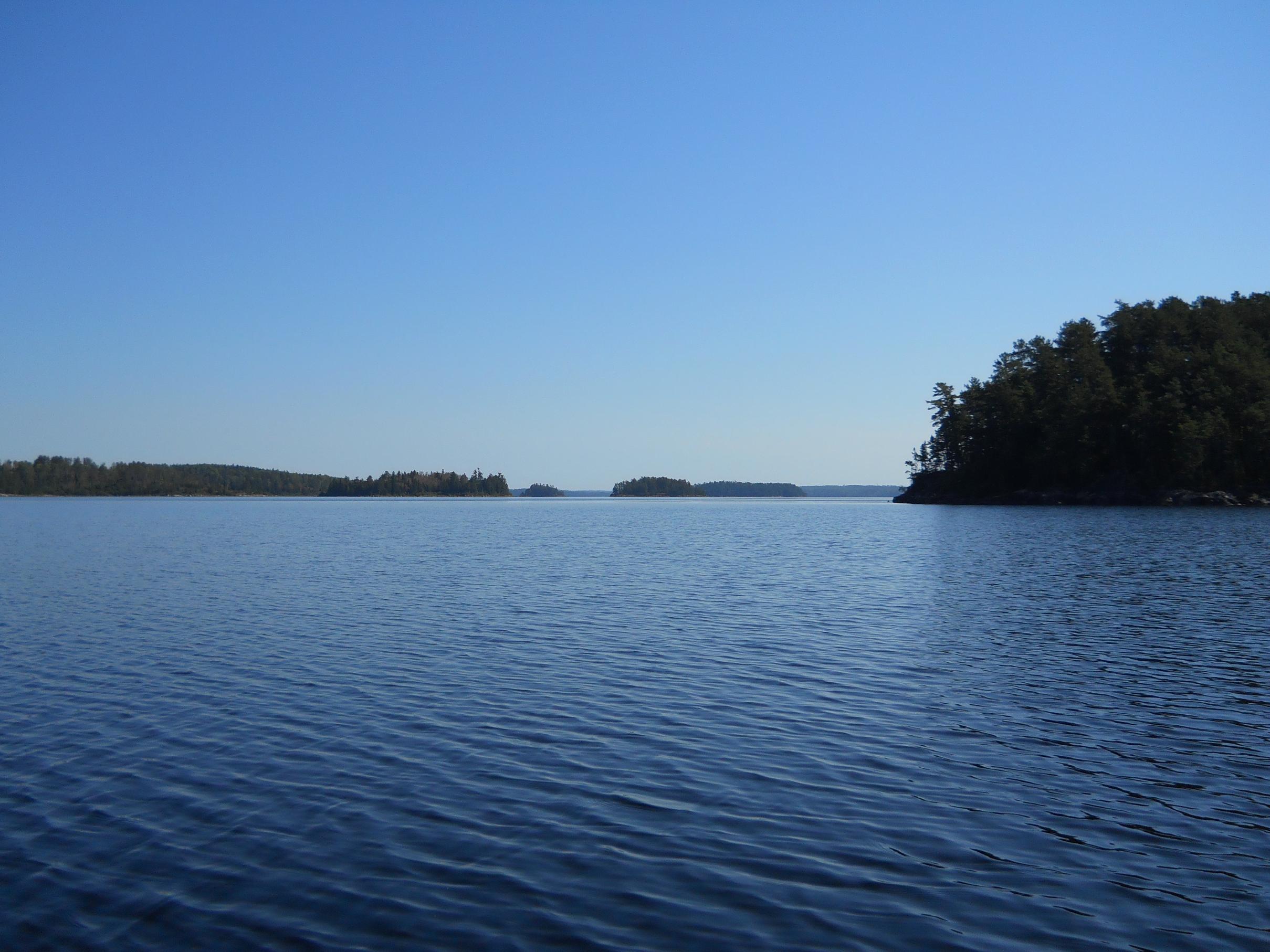 Two days after we left the Q, thunderstorms rolled in again...

Thoughts from this trip:

Double-check all newbie gear before leaving home city; Bring a lot less fishing tackle; Mountain House Beef Stroganoff is a winner - MH scrambled eggs are not; Must continue to correctly predict weather six months in advance (might have second career as meteorologist).

A week with great mates, great fishing, and near-perfect weather with no mosquitos or flies... PRICELESS