The First Time
by jcavenagh

Trip Type: Paddling Canoe
Entry Date: 08/12/1978
Entry & Exit Point: Fall Lake and Beyond (EP D)
Number of Days: 7
Group Size: 6
Trip Introduction:
My first BWCA adventure got me hooked on this wonderful area.
Discuss Trip: View Discussion Thread (11 messages)
Report
Back in 1978 my sister and her husband (then boyfriend) graciously allowed me to go along with them on a wilderness canoe trip to the Boundary Waters Canoe Area. I had heard about the BWCA from friends in high school who had gone there for Outward Bound and YoungLife trips. It really sounded great to me. I had done day trips to the woods, but never really camped for several days in a row. I had always wanted to leave the city and all its technology behind and camp out for an extended time. And so, on August 11, 1978. We all left Chicago after work and drove most of the night to get to Ely. The crew included Margo,my sis, Mark, her burly man, Mark’s sister, Florence, Dave H., a high school buddy, Meghan B., a family friend.

We arrived at about 4 a.m and just threw our bags on the ground next to the cars and hit the hay for few hours sleep.

In the morning, we had breakfast and went to Greystone Outfitters (n/k/a Voyageur North Outfitters.) We had rented those ultra-light 65 lb aluminum canoes! We got several canvas and leather Duluth packs, packed all our stuff and went to the put in at Fall Lake at 9:30 a.m. We really did not know what we were doing, but we got to Pipestone Falls at noon. We ate lunch in Pipestone Bay. Form there we paddled up into Jackfish Bay and then out into Basswood Lake proper. At around 7 p.m. we made camp. We did not really know where we were. I found a US penny at the campsite so we decided we were still in the US. We actually ended up about 2 miles into Canada. We knew something was wrong because there was no biffy and no fire grate, but we were rookies. We stayed there for 2 nights. We ate like kings. I recall my sister had made stuffed green peppers and put them in Seal-A-Meal(SAM). There was a lot of other fresh food, all of which had been SAMed and Autoclaved. (Mark worked in a science lab and had access to a real autoclave.)

On Monday we headed back south and turned west into the Basswood River. We went past Basswood Falls and took a campsite maybe 1.5-2 miles down the river. On Tuesday, I believe we day-tripped the Horseshoe Portage and saw Wheelbarrow Falls and Lower Basswood Falls. There was a little pool in front of our campsite and on Wednesday I got up about 5 a.m. and got into a canoe. I just pushed out into the water. Everything was calm and still. There was about 3 feet of dew just above the water. When I lay down in the canoe I could see nothing. When I sat up, I could see all around.

So there I was, floating quietly in the little pool just below the Basswood Falls, and it suddenly dawned on me that I had just wasted the last 5 years of my life. The words of Pink Floyd suddenly went through my head… And you are young and life is long and there is time to kill today And then one day you find, ten years have got behind you No one told you when to run, you missed the starting gun

I literally gasped in shock. That was the first real epiphany I had ever experienced.

It was one of those moments in life that is clearly etched and fixed in my memory. That is what the wilderness means to me even now 30 some odd years later.

I turned 21 that day. After breakfast, we broke camp and paddled up river back toward Basswood Lake. I convinced Meghan that we could paddle up the small falls and would not have to portage. DUMP! We spent the rest of that day wet. Unfortunately, it got windy and cool and so, the day was sort of miserable as we crossed Basswood toward U.S. Point. We had no business being out in that kind of wind on a lake as big as Basswood. But what the heck, we were young and life is long…and we were pretty scared out in those big waves! We got to the point in late afternoon, looked around the south side of the point, got blasted with a headwind and turned back. We took a campsite 1.5 miles southwest of the point. After dinner, Margo and Mark broke out some cake they had hidden, put some candles on, and sang me Happy Birthday. I spent my 21st birthday in the most beautiful place I had ever seen.

On Thursday, we paddled along shore (no more open water crossing for us!) back toward Pipestone. We found a campsite about 2 miles north of Pipestone Falls and settled in. We had to be back in on Friday and we knew we didn’t have far to go. On Friday we got up early and paddled out to Fall Lake and our take out point.

The last night in Ely, we camped at local camp ground. There were these guys a couple sites over who looked like they might respond to an offer. They did. So I traded the last nickel of pot I ever owned to them for several large walleye fillets. And from that time I got my act together, moved ahead with my life and never looked back.

The northern forest had captured me. It was so clean and pure. We drank water right from the lake! I had never in my 20 years ever considered that I would ever do such a thing. I knew that I would be back soon. 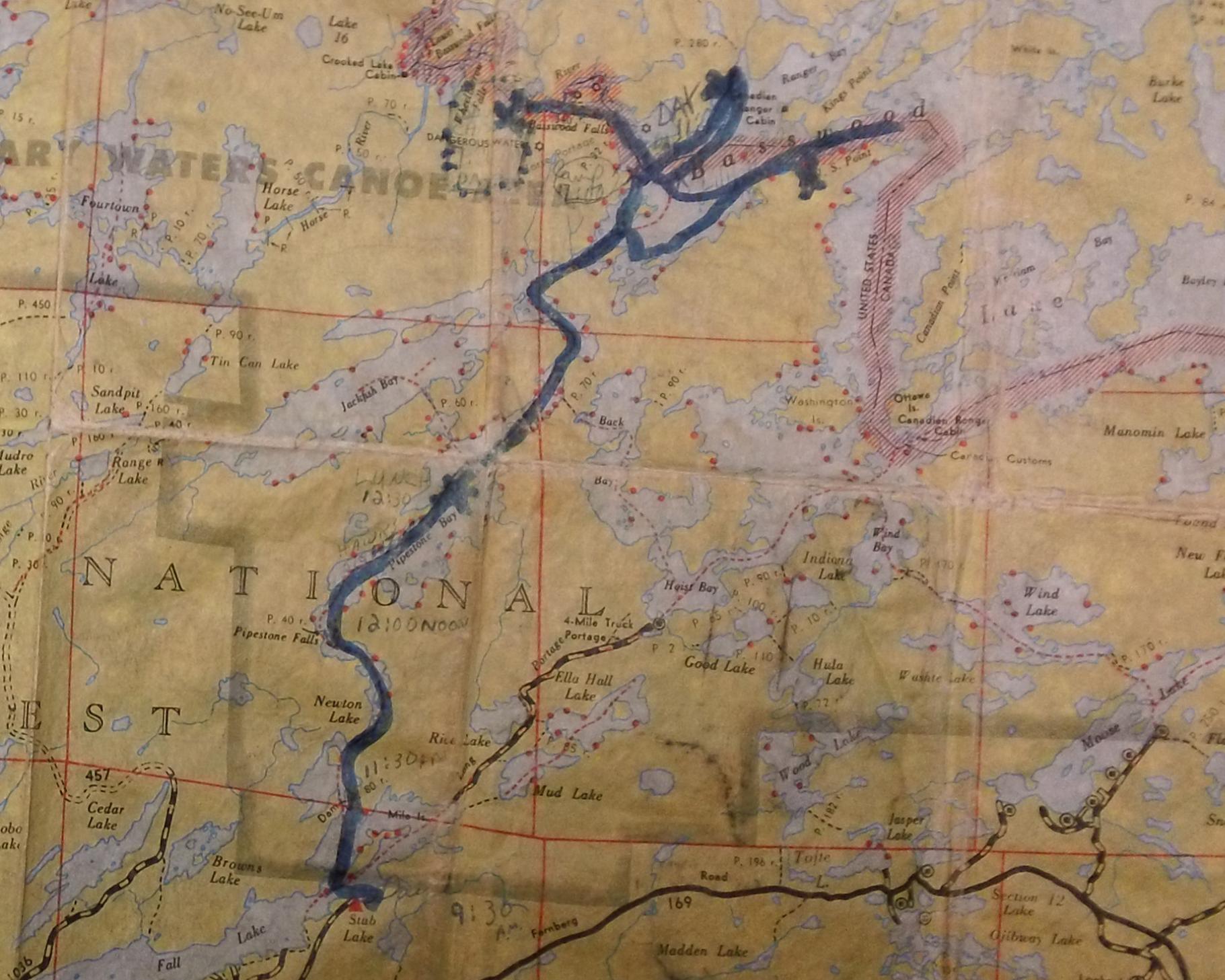