Lakers and Lights
by tg

Trip Type: Snowshoeing
Entry Date: 03/08/2012
Entry & Exit Point: Other
Number of Days: 3
Group Size: 1
Trip Introduction:
I wanted to squeeze at least one trip in during this winter of 2012 that never was. Tried to recruit some friends but it apparently was meant to be a solo trip so I went for it. Still refining my winter kit and procedures-this would be a good test of self sufficiency. And in the wake of a major solar flare/storm the forecast was great for a memorable Northern lights show. I only had 3 days so it would be a short haul in to allow time for laker fishing.
Discuss Trip: View Discussion Thread (11 messages)
Day 1 of 3
Thursday, March 08, 2012 High temp 28F, Low temp 12F
Had hoped to leave first thing this morning but a gas leak at home and urgent repair delayed departure until 11am. Kept the stops to an absolute minimum on the way up to the Gunflint-stopping only for gas and a Fitger’s Nalgene growler of Starfire IPA. Arrived at my destination and parked around 430pm.
Email me if you want to know exactly where I went but this place is kind of special to me so I would rather not blab all over the internets about it. This is Superior National Forest land where dispersed camping and motors are allowed but it generally offers the same look, feel and solitude of the BWCA-save for an occasional snowmobile in winter. But being just outside the BWCA (ie no permit/quota and motorized activity allowed) I worry that it may be overrun with visitors if word gets out.
Snow was starting to fall and I knew I had to move relatively quick as sunset was 6pm (just before the end of daylight savings time). One relatively short but steep portage/snowmobile trail and I was on the lake. Because of my late start I packed a bipod to support my stove pipe (rather than cutting poles) and I hauled in a small amount of firewood (certified pest-free).
Snow was falling pretty hard now and wind was gusting out of the west. I found a slight indentation along the southern shore of the lake to setup camp which provided a little shelter from the wind. Unfortunately the snow had drifted deep in the area and I would later find that I setup camp over a large slush pocket. After some wrestling with the Snowtrekker tent in the gusting wind I got it setup, screwed down using ice screws and unloaded the rest of the toboggan. I settled into the tent about 7pm. It was snowing and blowing so hard I couldn’t see 50 feet in front of me nor could I see the practically full moon.
Got the stove up and running and built a fire to keep me company. Got a glimpse of the Northern lights about 1130pm IIRC when the clouds parted briefly but not what I was really hoping for. I surmise the nearly full moon didn’t help. Got down to about zero overnight. 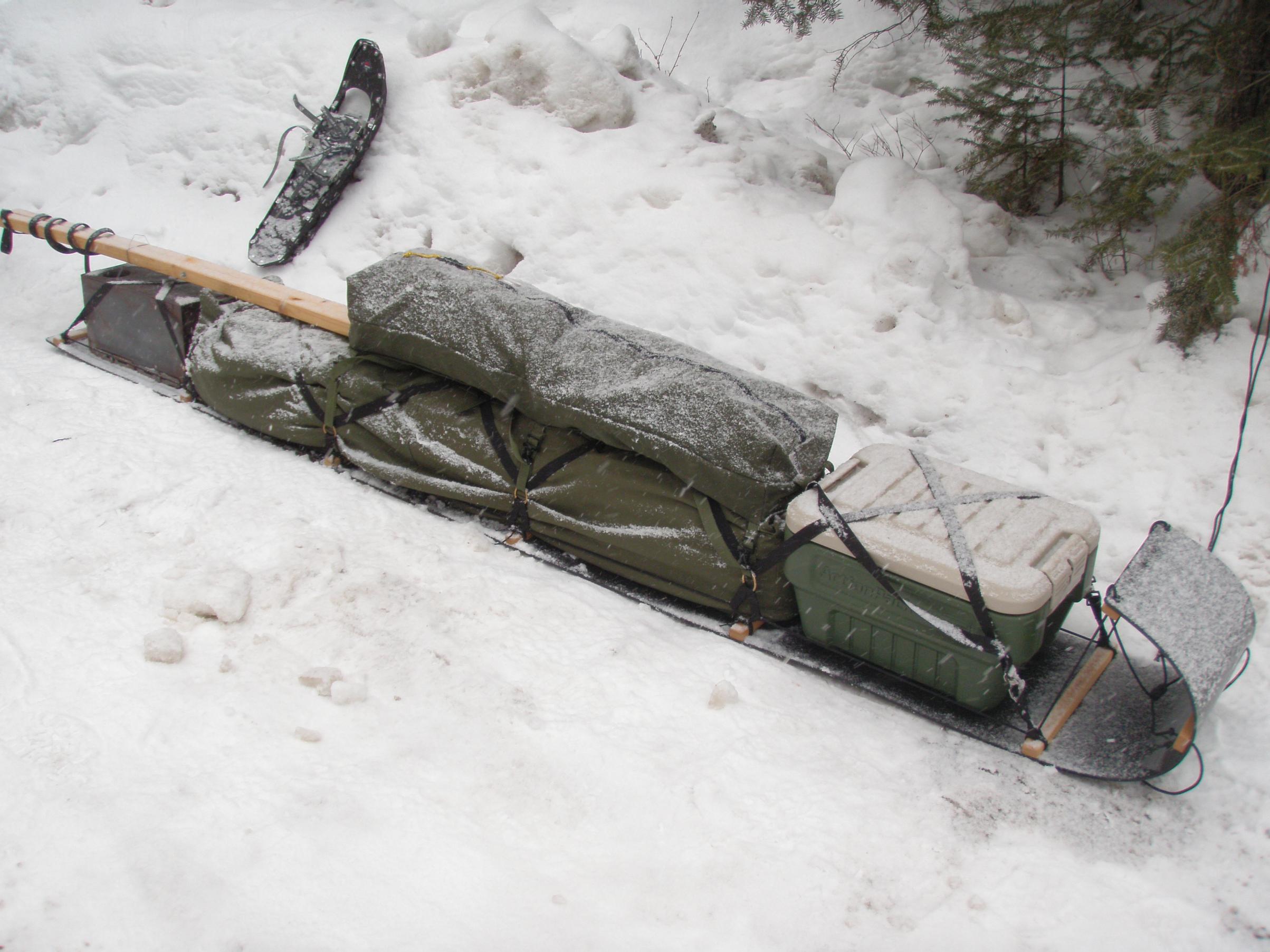