The morning started cool, high 30's. The weather back in Ohio this holiday weekend was to be in the mid 90's, so this was actually quite refreshing. I was up early, just before 6 AM. Luckily enough, the cool air was still rolling off the land over the relatively warm water. That beautiful low morning fog just over the water was forming with a bright blue sky overhead. 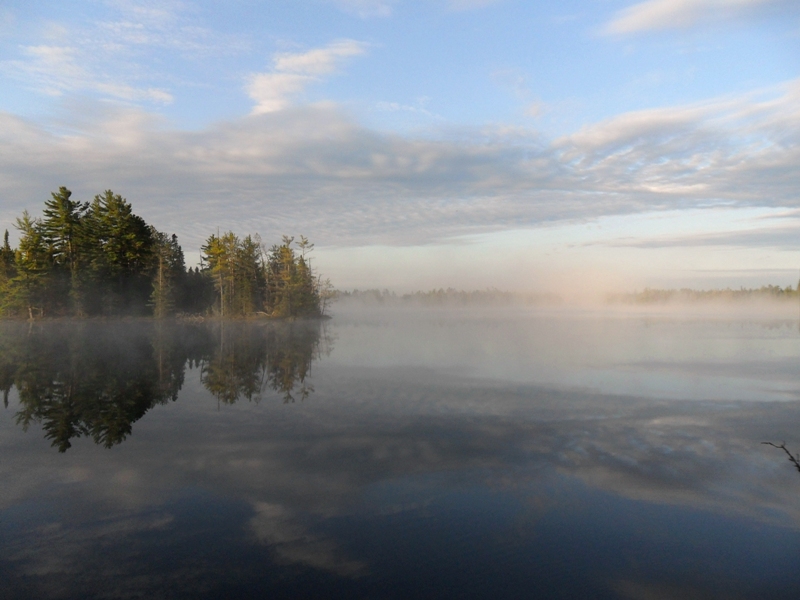 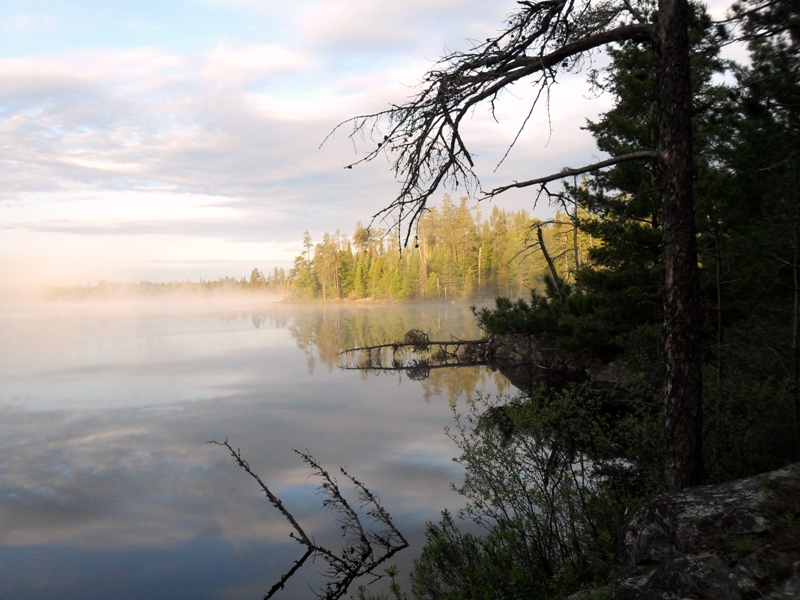 After a breakfast of pancakes and a quick camp breakdown, we were on our way. Our first task for the day was a portage to Phantom lake. This presented the only navigational error of the trip. Finding the portage, and even Phantom was easy enough, the portage was flat, dry and short. But, we could have skipped Phantom all together and simply gone to Sprite Lake straight away. All we had to do was explore the fork in the portage. Having found ourselves back on essentially the same path we just took, we made our way to Sprite. After yesterday's encounters with debris strewn portages we decided to make an effort to make things easier for those who would follow us. The short portage to Sprite would be the start of that. Two trees, one relatively large, blocked the path substantially. Jon and Aaron made quick work of them with the saw provided by VNO while the rest of us staged the gear and canoes.

Once the portage clearing was done the group was onto Sprite. A handsome little lake really. The water was almost like a well steeped black tea, the concentration of tannins being higher in the lower volume lake. A very quick journey across its small surface brought us to the Meat Lake Portage. The portage itself was nothing spectacular, a relatively clear, rolling ordeal through more mature pines. What lay to the side however would foretell what Meat Lake had to offer.

Beavers, loons, and one deer had been the only wildlife we had actually put our eyes on during the trip. Our groups size no doubt played a role in that. It was the beavers that made themselves most obvious though. Not just the gnawed stumps and piled wood, but what that tedium can do to a body of water. Arriving at the end of the portage to meat lake one passes a series of small beaver ponds and dams, capped by one large dam. This work of civil engineering had reduced Meat's inflow to nearly a trickle, and its water level showed the consequences. Depths had dropped 6 to 10 feet from what appeared to be the normal levels. This is quite significant in a lake whose max depth was 20 feet previously. A small carry over portage had been created by the low water levels leading into the the last lobe of the lake (normally 5 feet). 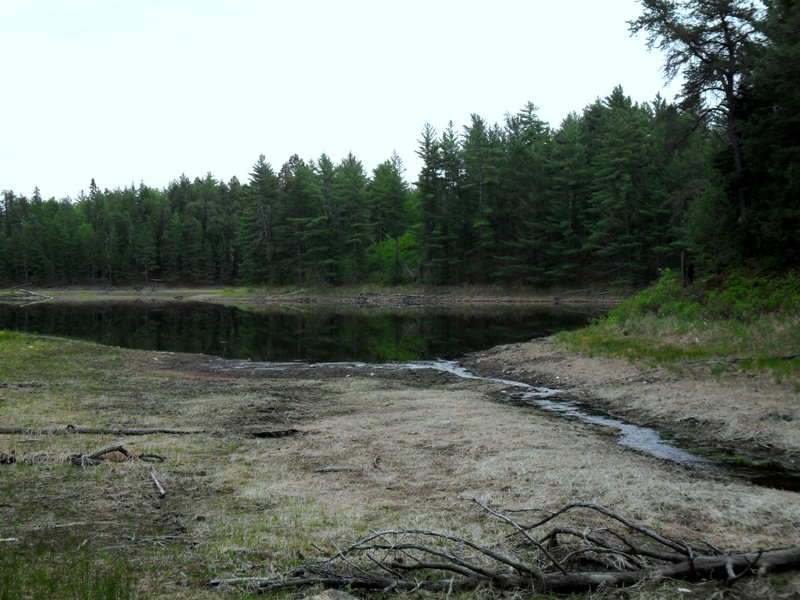 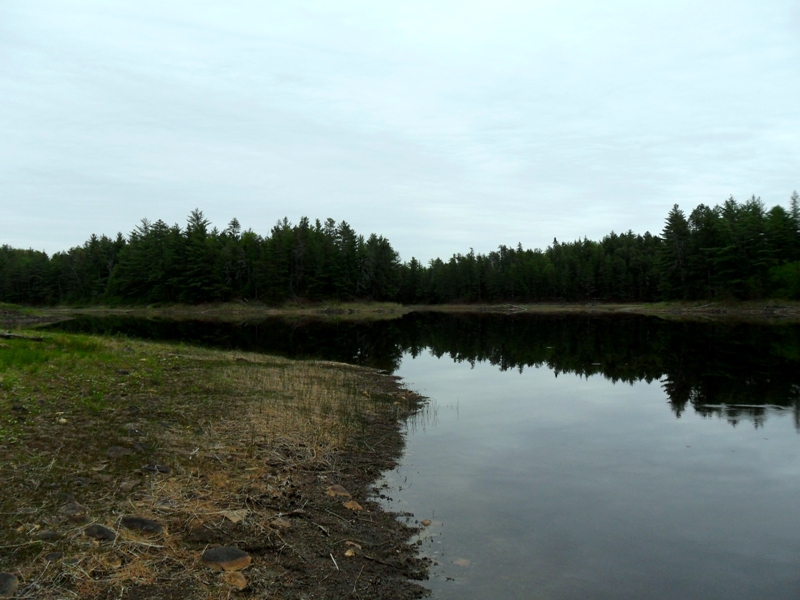 After finding our way across what was left of meat lake we were presented with the short (48 rod) portage to Clark Lake. We made the trek with relative ease despite the weight of packs and canoes beginning to have their effect on us. We paddled a short distance and took advantage of the campsite landing for a lunch of PB&J. The end of lunch brought a quick exploration of Clark lake by Erika, Brittany, Aaron, and Kyle. Jon and I took some time to relax on shore for a few minutes. Slightly rejuvenated we made the paddle directly across the lake to the days longest portage; back to Crab.

Despite having been in and out of the boats all day with the smaller lakes traversed, we decided to single trip the 130 rods. Though not terribly rocky this would be our most technical portage of the day. Once out of the water we were greeted quickly and harshly by a steep climb. My tanks were empty immediately. Luckily Kyle was in a good rythm and could keep me going. We stopped a couple times to rearrange packs, affording enough time to regain some mojo. Finally, with one last awkward steep decent we were back at Crab, not much more than a stone's throw from where we exited the same lake a day before.

Back on a larger body of water the long paddle to little Crab provided some time for recovery and reflection. Two families had made it out onto the lake for the weekend, the only people we would see the whole trip. It was refreshing to take in the fact that we were indeed 1000 miles from our normal day to day. Be it farming, nursing, running, or simply going to class, this was break for all of us, despite its strenuous nature.

In good time we made the very short, very groomed portage to Little Crab. A couple paces and we were on the water again. We paddled long and steady, with the occasional stop just to look and be quiet. At last we reached the short and wet portage from Korb to Cummings. We had been told of wolf activity in this area before we set out, we would see our only evidence of such in the form of fresh scat at the portage terminus.

Back on expansive water our 3 vessels spread out. Gazelle and her light load found herself well ahead, Rhino was better than a quarter mile afield to the west, and Water Buffalo chugged up the rear, fully laden.

Finally, tired from a day of paddling and portaging we reached our campsite at the northeast end of Cummings. We had landed the prime real estate with a 5 star campsite. Aaron and Kyle took some time to fish, somewhat successfully, while the rest of us set up camp and got to work on dinner (lasagna and berry cobbler this night). As light grew dim and the fire found itself extinguished we were quickly asleep. Light rain started to fall. 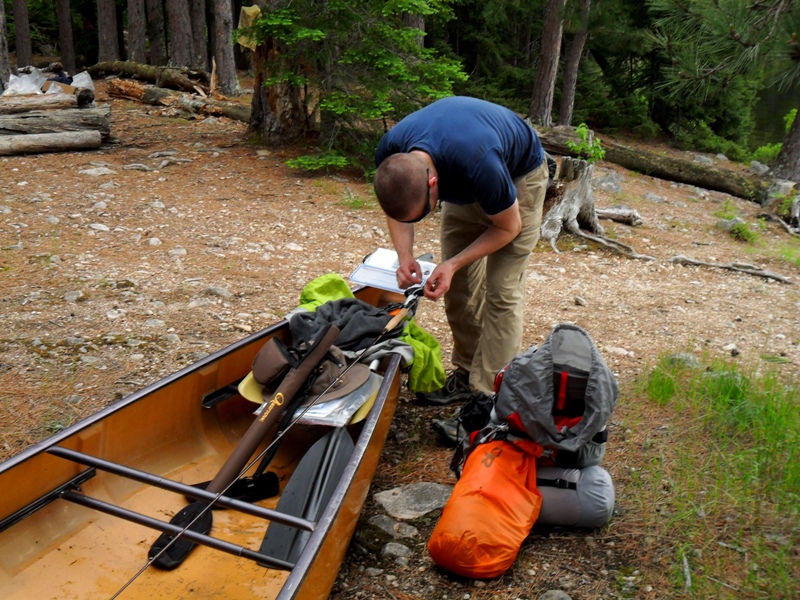 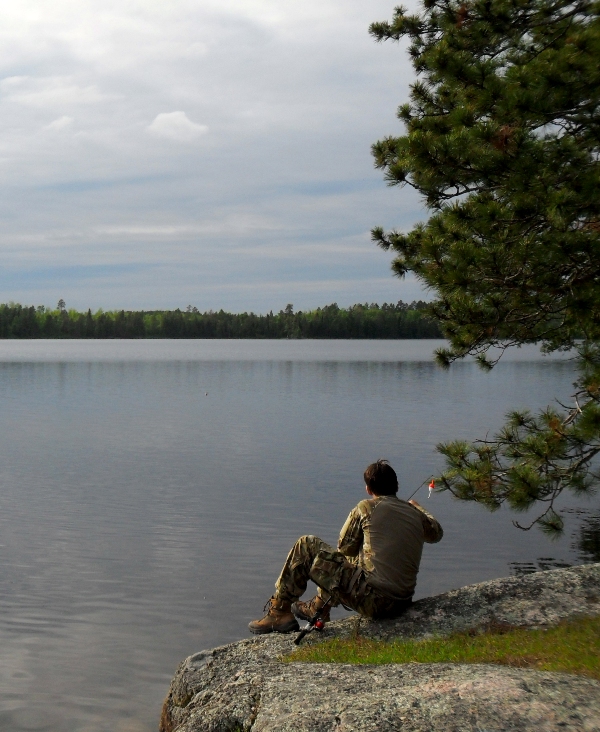 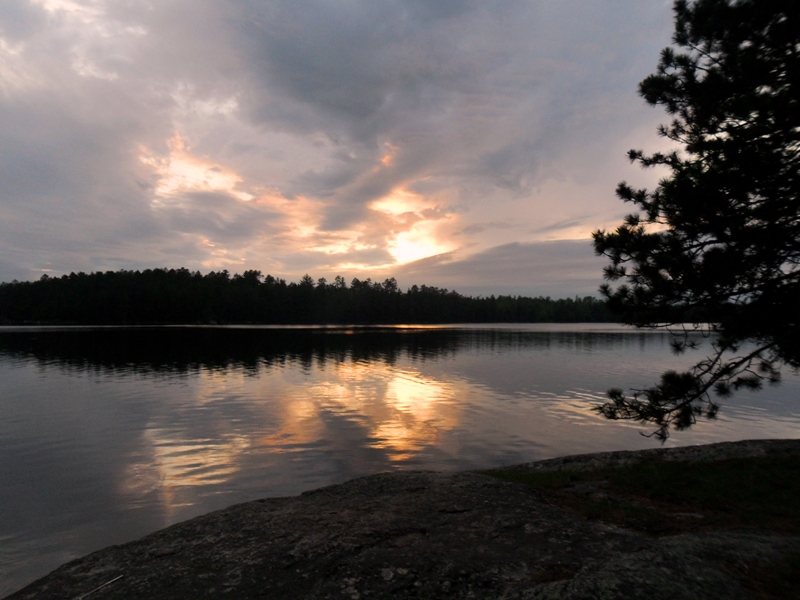