A River Runs Through It...
by TeamTuna06

Trip Type: Paddling Canoe
Entry Date: 06/04/2012
Entry & Exit Point: Saganaga Lake (EP 55)
Number of Days: 5
Group Size: 2
Trip Introduction:
This was originally planned as my wife's first trip up the to the northwoods. When it looked like she wouldn't be able to get away from work for this particular week, she told me that I should ask my dad to take another trip. I brought my dad (TM) up for his first trip last year, and we had an awesome weeklong basecamp on Saganagons in the Quetico. I knew that he'd be excited to head back up...especially early in the fishing season when the bass would be more aggressive. After a quick phone call to confirm, the trip went from "Wife's first trip" to "Father and Son, back for more." Like last year, we decided on a complete outfitting from Deb and her staff at Seagull Outfitters. She runs a truly first rate outfit and is a pleasure to deal with...I'll be a customer for a long time. Also like last year, we decided to leave Saturday afternoon and shoot for Spooner, WI...stay over there, and get an early start for the Gunflint Trail Sunday morning. All in all, another great trip with my dad...good company, good fishing, and (mostly) good weather. What more could a guy ask for!?
Discuss Trip: View Discussion Thread (11 messages)
Day 1 of 5
Monday, June 04, 2012

Up and at 'em...bright and early 5:30am wake up call. We stayed at the Seagull Bunkhouse last night so we just have a few last minute packing items before our 7am tow to Honeymoon Island just East of American Point. We slept rather well (considering the kid on Christmas Eve mindset the night before putting in) and ate a quick breakfast of cereal and fruit. After a quick shower I transfered some homebrewed beer into a 64oz. plastic juice bottle for the first night. I thought it'd be cool to bring some homebrew on the trip this year, and I brewed an Oatmeal Brown Ale for the occasion. I loosely modeled it on Surly's Bender, and thought the name Boundary Waters Brown fit well...turned out to be a treat after portaging all day and the mini hurricane that hit our camp...more on that later!

After a quick tow out to Honeymoon Island, we loaded up and were on the water around 7:30am. Big Sag was glass, with not a hint of wind...lucky us! I got a purpledescent Tail Dancer in the water and we headed around American Point and SW towards Bay 1. 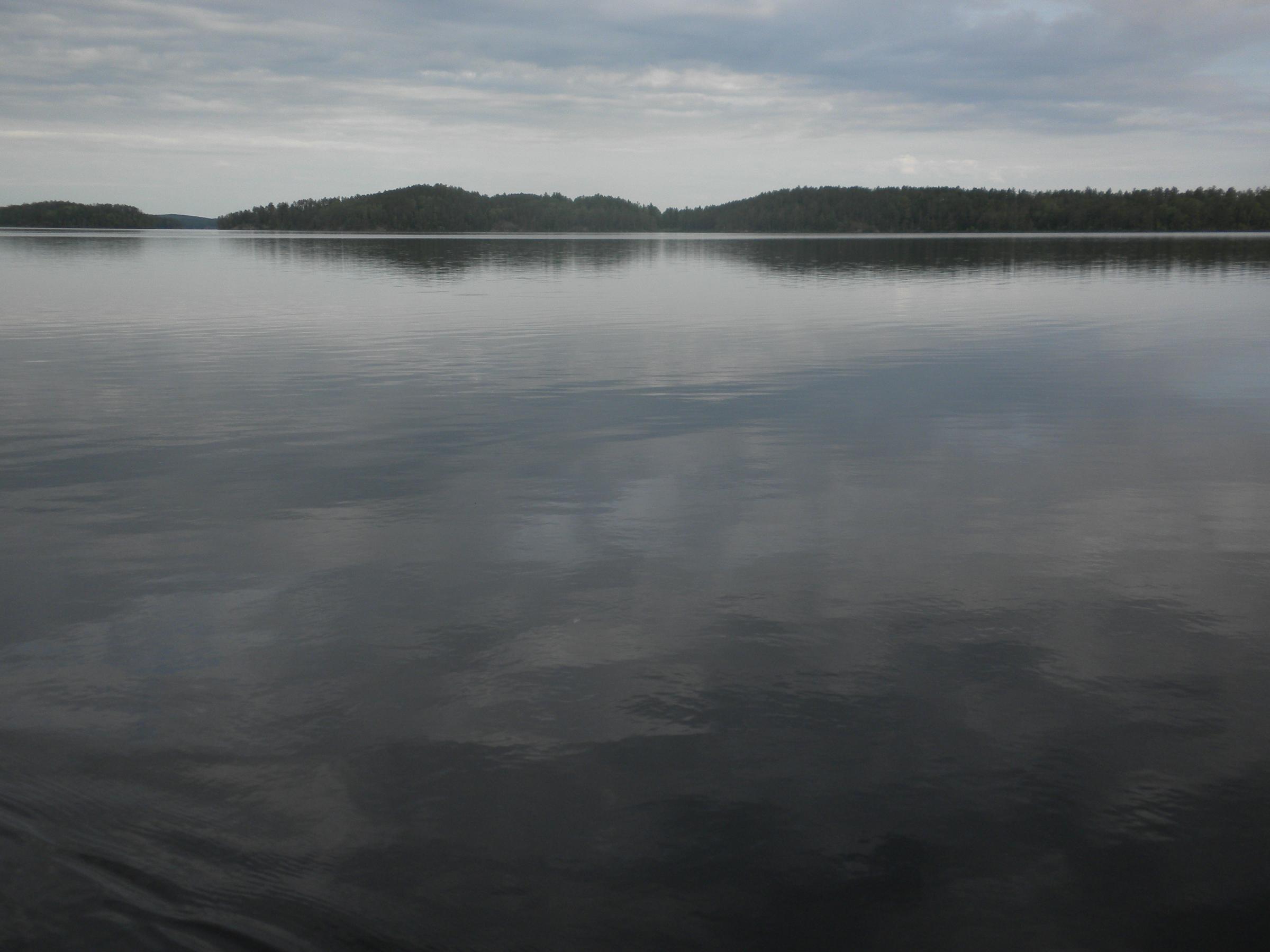 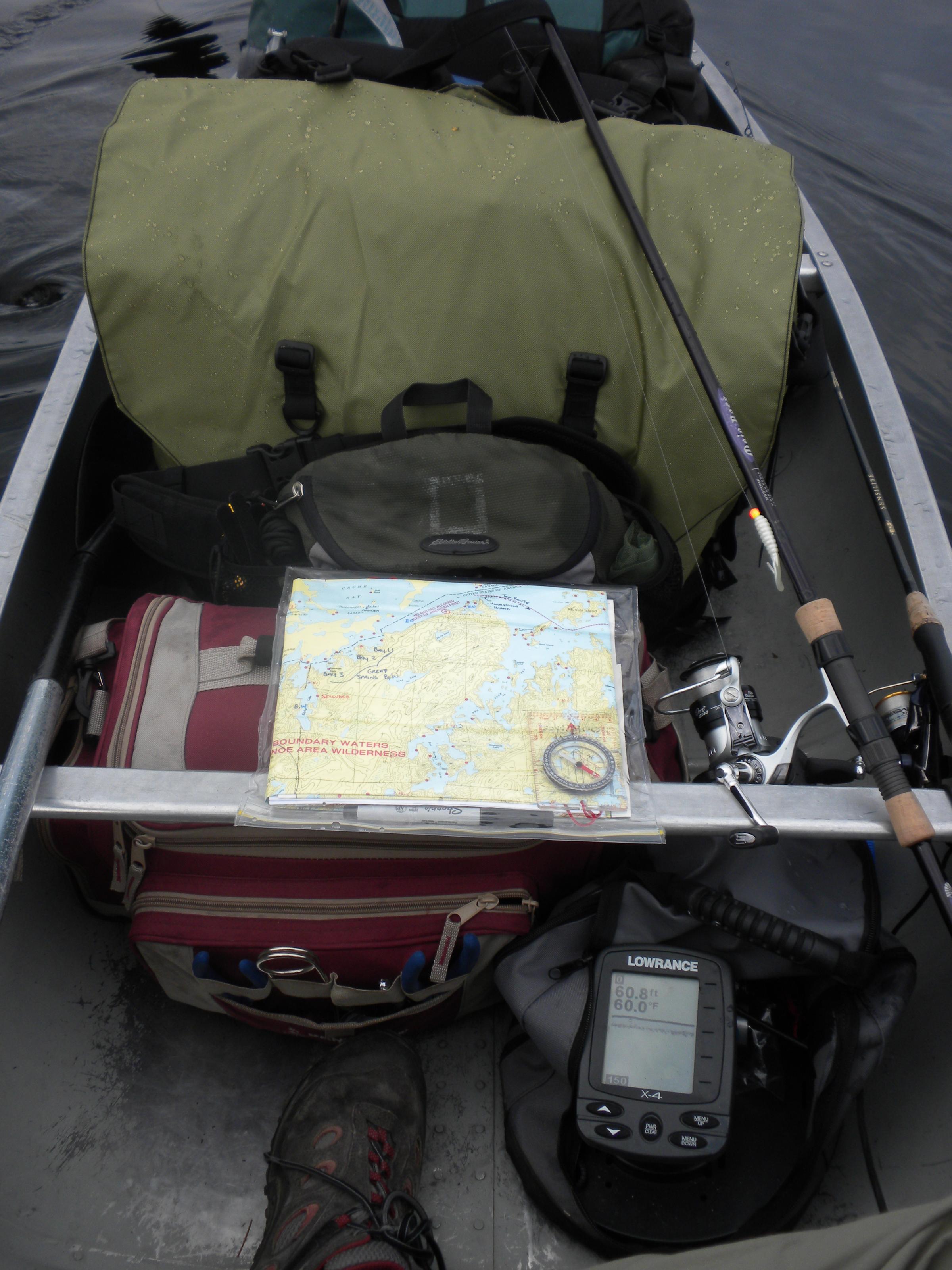 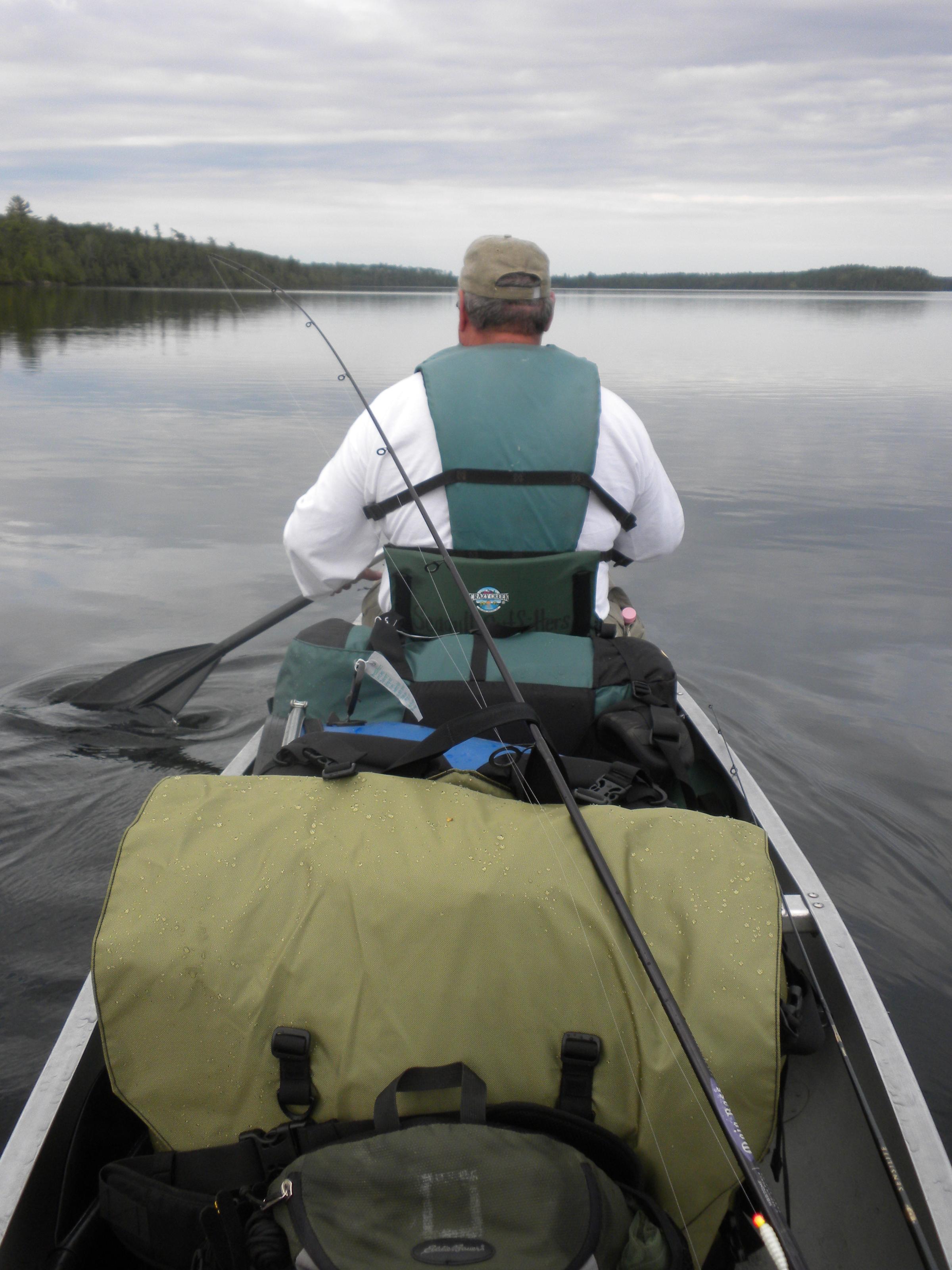 The paddle towards the smaller water on the West of Saganaga was relatively uneventful. Good because there was no wind...Bad because there were no fish. We continued trolling through Bay 1 with no success. After bringing in the line with no success, we stopped briefly on a small island just before the narrows leading from Bay 2 into Bay 3. Spotted a Lady Slipper just up from the shore, first I've ever seen. Before getting onto bwca.com I probably wouldn't have noticed/cared at some of these smaller details of the trip. I'm glad I do now. 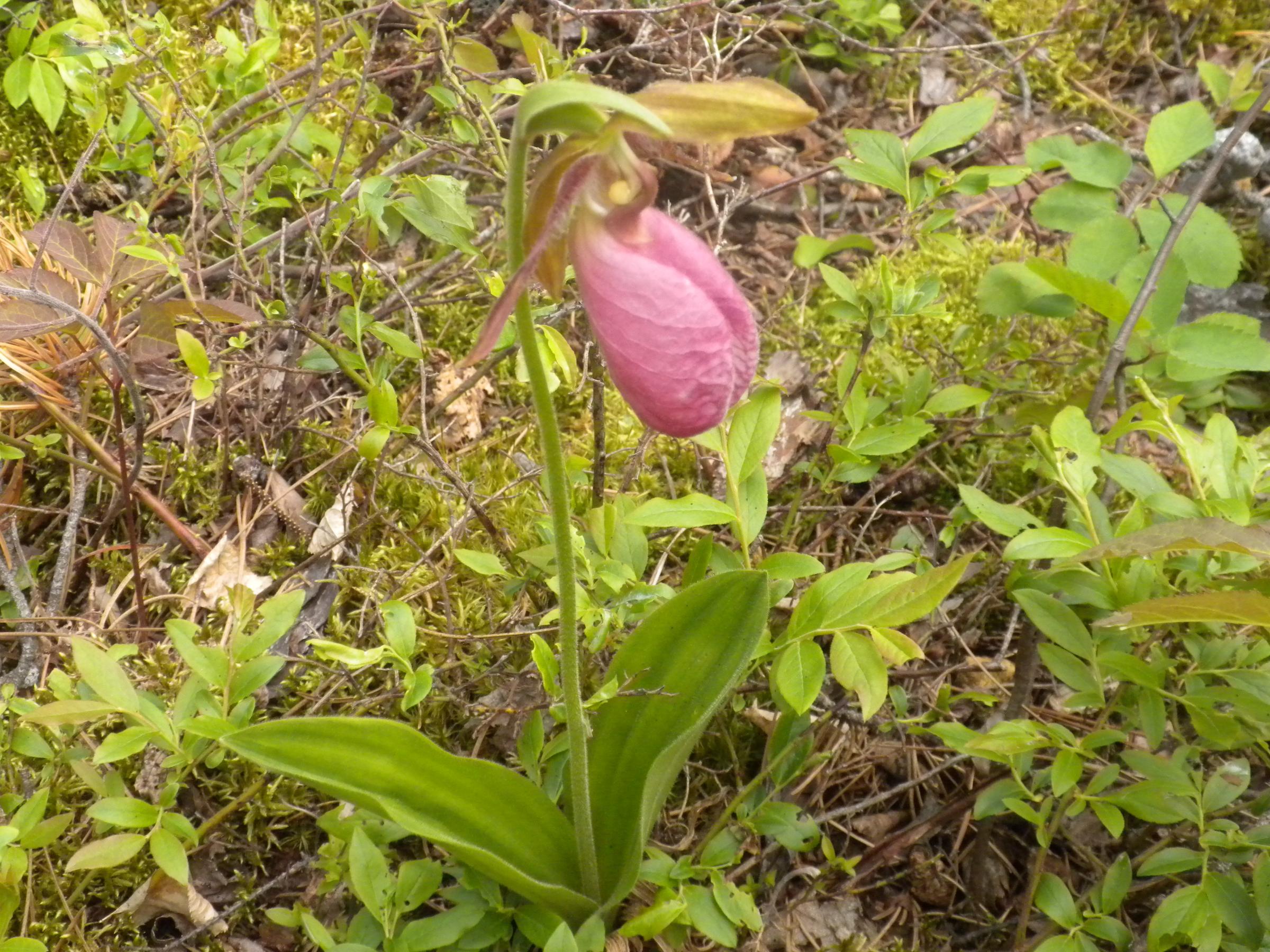 After our quick break, we were back on the water passing through the narrows between Bays 2 & 3. Really cool area...neat paddle. Lots of good rock structure under the surface and some really "fishy" looking areas. We were planning on trying to make decent time into Ester to get our camp site of choice so we made a note to fish this area on the way out and kept moving. Soon we were at the lift over from Saganaga to Swamp. Uneventful, had about 15 feet of rock to lift the canoe over...back on the water in 10 minutes or so. right around 10:30 we made it to Monument Portage. As we did last year, we were planning on double portaging on travel days and single portaging on day trips. The portage was rather uneventful...mostly dry with some muddy areas early on (heading from East to West). I took the canoe (Alumacraft Quetico...hey, a guy has to get his weight training in sometime right?) and the barrel/tackle bag/rods. TM took the two Granite Gear packs and the paddles. 30 minutes or so and the first real portage of the trip was behind us. We chatted briefly with two other groups. One were a pair of guys in a kevlar canoe headed towards Knife...nice enough, but not overly chatty. The other was a father with his two daughters from Arizona headed for a fishing day trip into Ottertrack. He said that his daughters had caught a couple of four pound bass, so we talked fishing for a bit. Nice guy. Headed towards the Ester Portage by 10:30 or so. 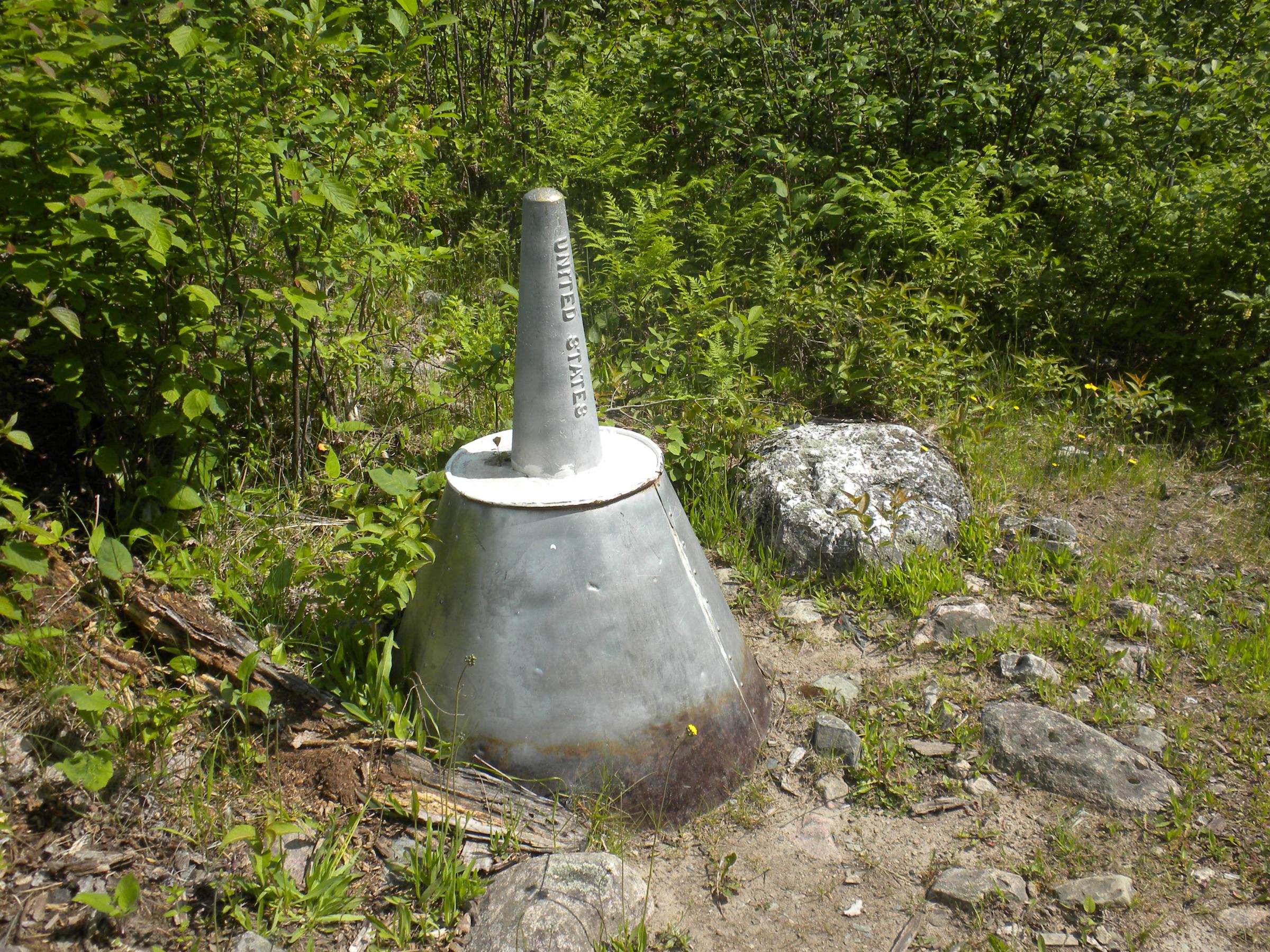 After a quick 20 minute paddle around the corner, we arrived at the Ester Portage. I was obviously stoked to get the aluminum beast back on my shoulders, and TM was looking forward to some more hill climbing with heavy packs. Upon landing we noticed some fresh scat of some sort right on the rocks by the water. It was in small clumps probably 3" in diameter...probably 3-4 of them. We had a decent go of it on the way over to Ester. For some reason I thought the big pine at the top of the hill was the halfway point of the portage, so you can imagine our joy at seeing water a few steps later. There was less mud here than on the Monument portage...not too bad overall. Another 30 minutes and we were on our home for the week, Ester Lake! 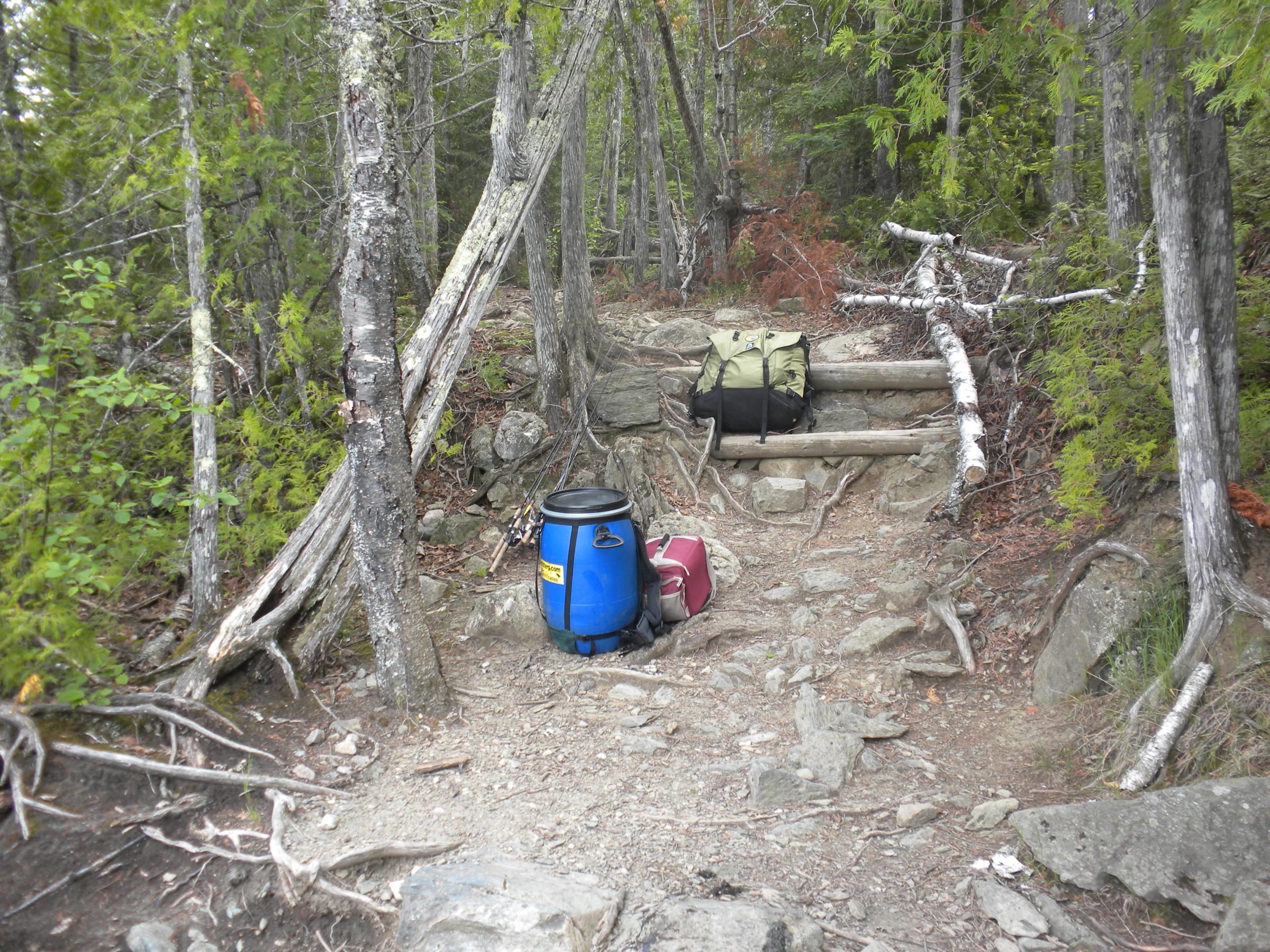 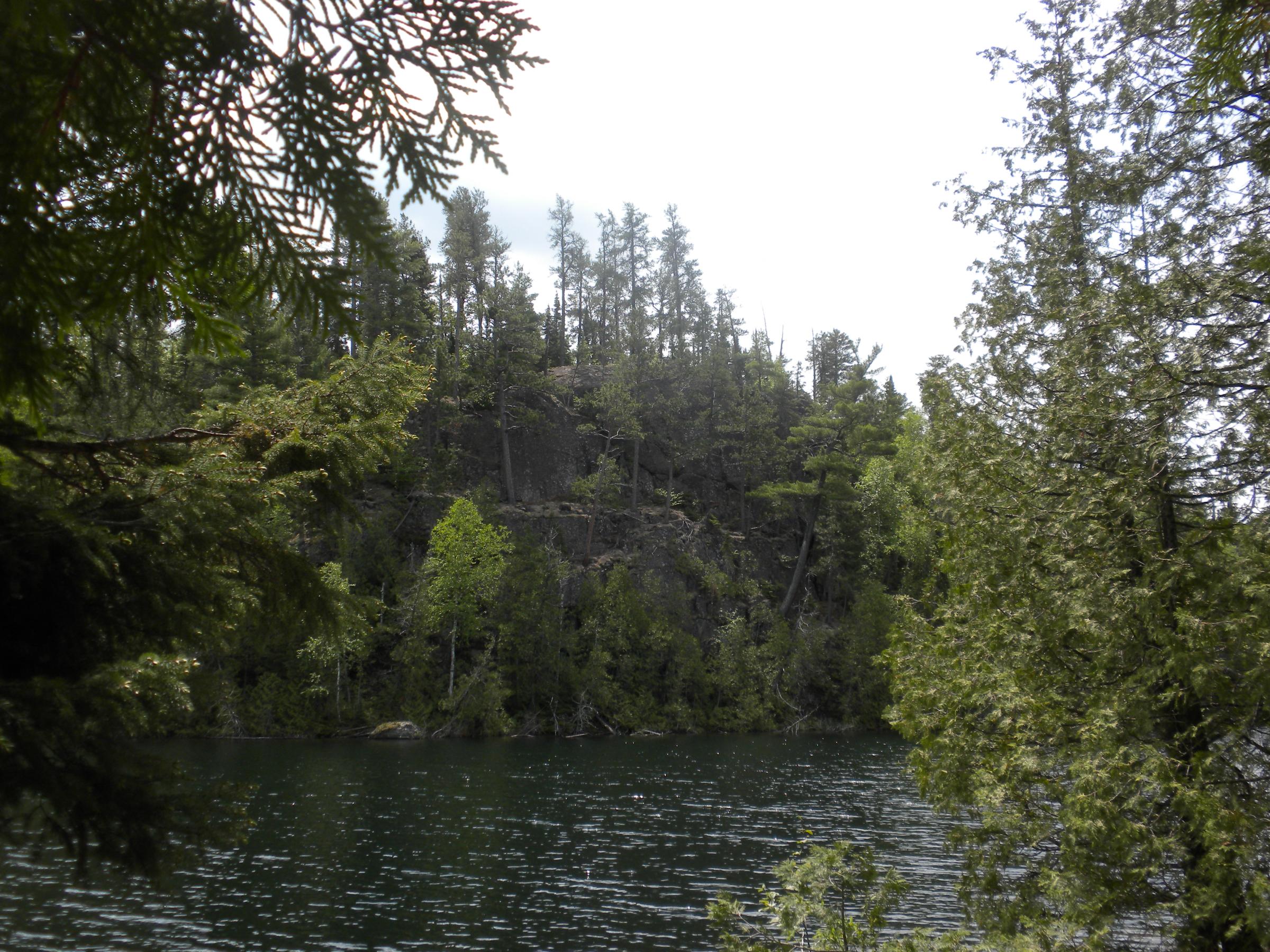 The North end of Ester immediately after the portage is a cool area. Fairly narrow and close in...it's a nice little paddle. As we rounded the turn and headed South towards our goal of the North Island Site, we caught a little bit of the SW wind that was predicted for the day. At this point the water temps were around 65, about the same as in Sag during the paddle in. We made quick time across and headed down the the island's North site. We were in luck...it was open...Great Success!! We paddled up and proceeded to get camp set up. It was right around noon by the time we got to camp, and about 12:30 by the time we got the tarp and tent set up. So here we were: camp set up, having a couple of Boundary Waters Browns (which were reeeediculously good), talking about where the bass assault was going to begin. Nothing wrong with that right? Wrong. It was about this time that Hurricane Ester decided to blow in from the ENE and ruin our fun. Between the wind gusting to around 15mph and the 1"-2" of rain that it dumped in the course of 90 minutes, a good time was had by all. Well, I guess that's why God invented Gore-Tex right? For those of you wondering why I named the trip report as I did...this is why. We literally had a mini creek running through our camp (conveniently under our tent...sweet) and down to the water. A River Runs Through It...F-you Brad Pitt. 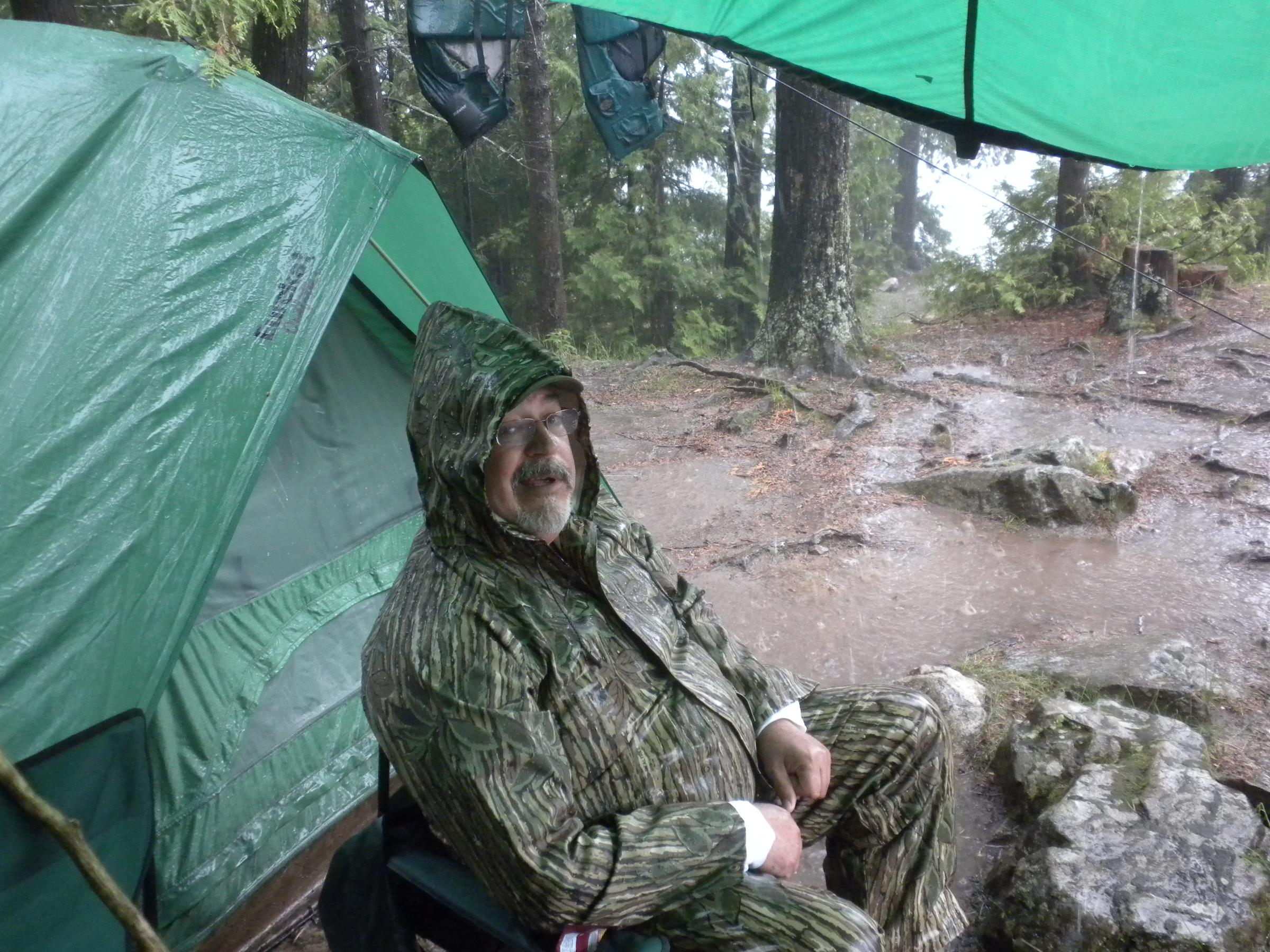 After the rain, we were soaked...muddy...and in surly moods. What better way to shake off the fact that our tent is sitting in a puddle and we have a river running through our camp than by paddling down to Hanson and ripping some lips! We got onto a nice plastics and topwater bite on Hanson and noticed that the water temps were around 5 degrees warmer on Hanson than on Ester. Thusly, the bass were more active. Caught a few nice ones in the 17" range and called it a day. TM caught a small perch on the way back to camp to bring the species up to 2. We got back to camp, aired out our tent and chose another tent pad. We got a makeshift innie set up and slept dry...not to bad, considering. Great first day!