Trip Type: Paddling Canoe
Entry Date: 06/05/2012
Entry & Exit Point: Clearwater Lake (EP 62)
Number of Days: 4
Group Size: 3
Trip Introduction:
Since we only had four days - our goal was to find a hospitable base camp that provided an accomodating setting, good daytrip options & wouldn't take all day to get there. Yet, we were hoping to find something on the quieter side. With only one long, tough portage Gogebic lake seemed to offer just what we wanted.
Discuss Trip: View Discussion Thread (17 messages)
Day 1 of 4
Tuesday, June 05, 2012

Having arrived at East Bearskin campground late (11:30ish)last night, no one took the time to put up a tent or shelter of any kind. One small advantage of this strategy was that it was tough to want to sleep in too late. Since sleeping in vehicles isn't always the most comfortable.

Needless to say we were probably Bearskin Lodges first customers of the day. We picked up our permit & I grabbed a hat. (Forgot mine) Just like that, we were on our way to the Clearwater lake landing.

Being there was an odd number (3) of us, I decided to paddle the Black Pearl solo. I've employed this strategy on a few different occasions. Knowing that as long as it didn't get too windy? I'd be perfectly fine. My buddies Kelly & Ross would partner up in Ross' Northwind. The "Red Bell Pepper".

Since I was going solo; I got loaded up & on the water right away, figuring Kelly & Ross would catch me down the lake. While they finished loading up, a red fox came down to the landing very near to them. Out on the lake, at the approximate wilderness boundary, I had this guy fly right over me & land in a nearby tree. 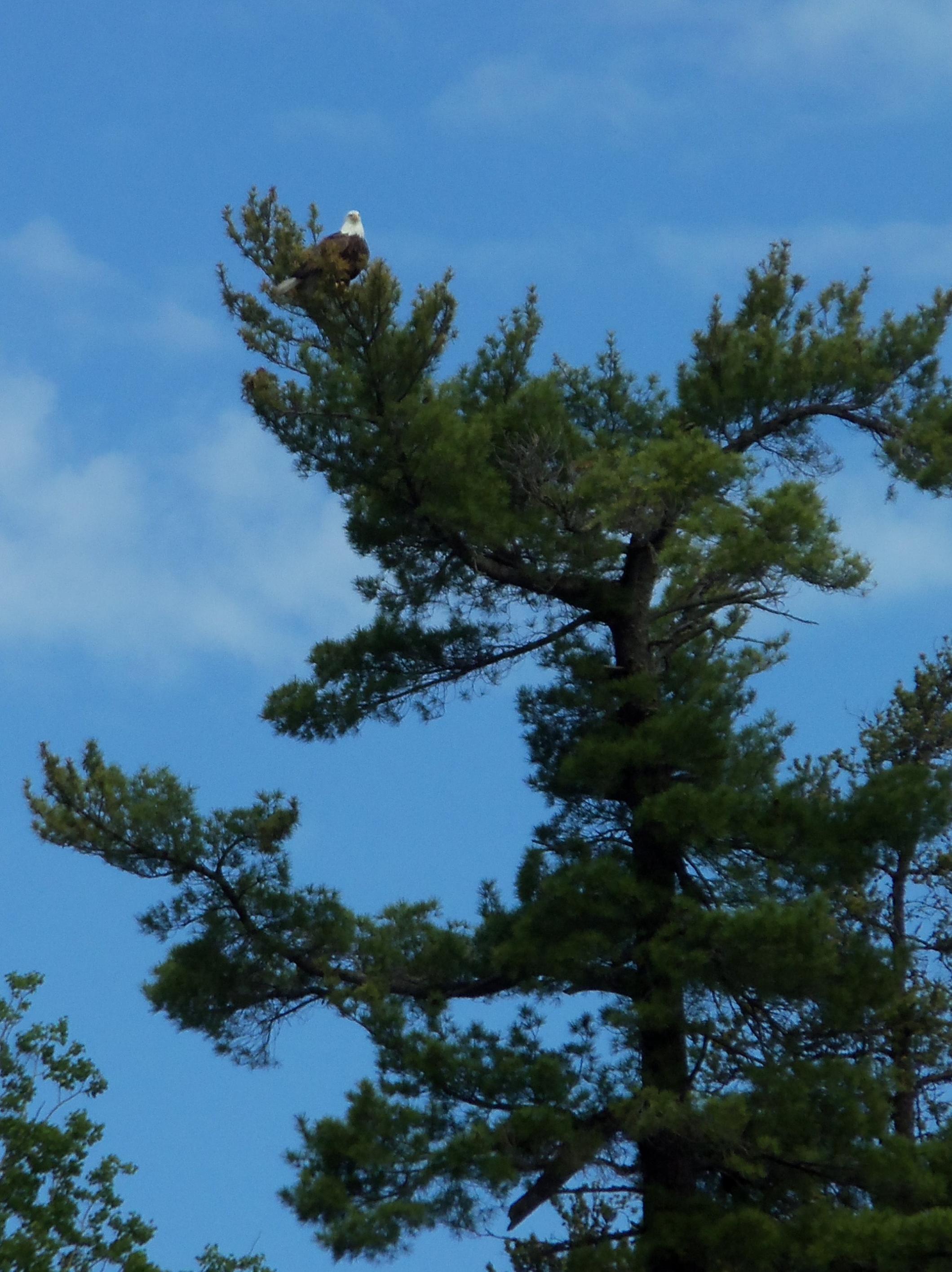 Kind of a neat start to the trip?


The weather forecast for our trip was very encouraging. And, a beautiful day was in progress. Never the less, I chose to follow close along the north shore. Just in case anything suddenly whipped up. I drug a rapala behind as I paddled but, wasn't really targeting any depth or structure. Just thought maybe I'd get lucky? I didn't.

Aptly named, Clearwater lake offers the most sublime, scenic paddle of any BWCAW entry point lake. The palisades on the southern shore have been well documented. And, are worthy of all the praise they recieve. But, there are many various spots along the way that are also aesthetically pleasing to the sensory pallet. 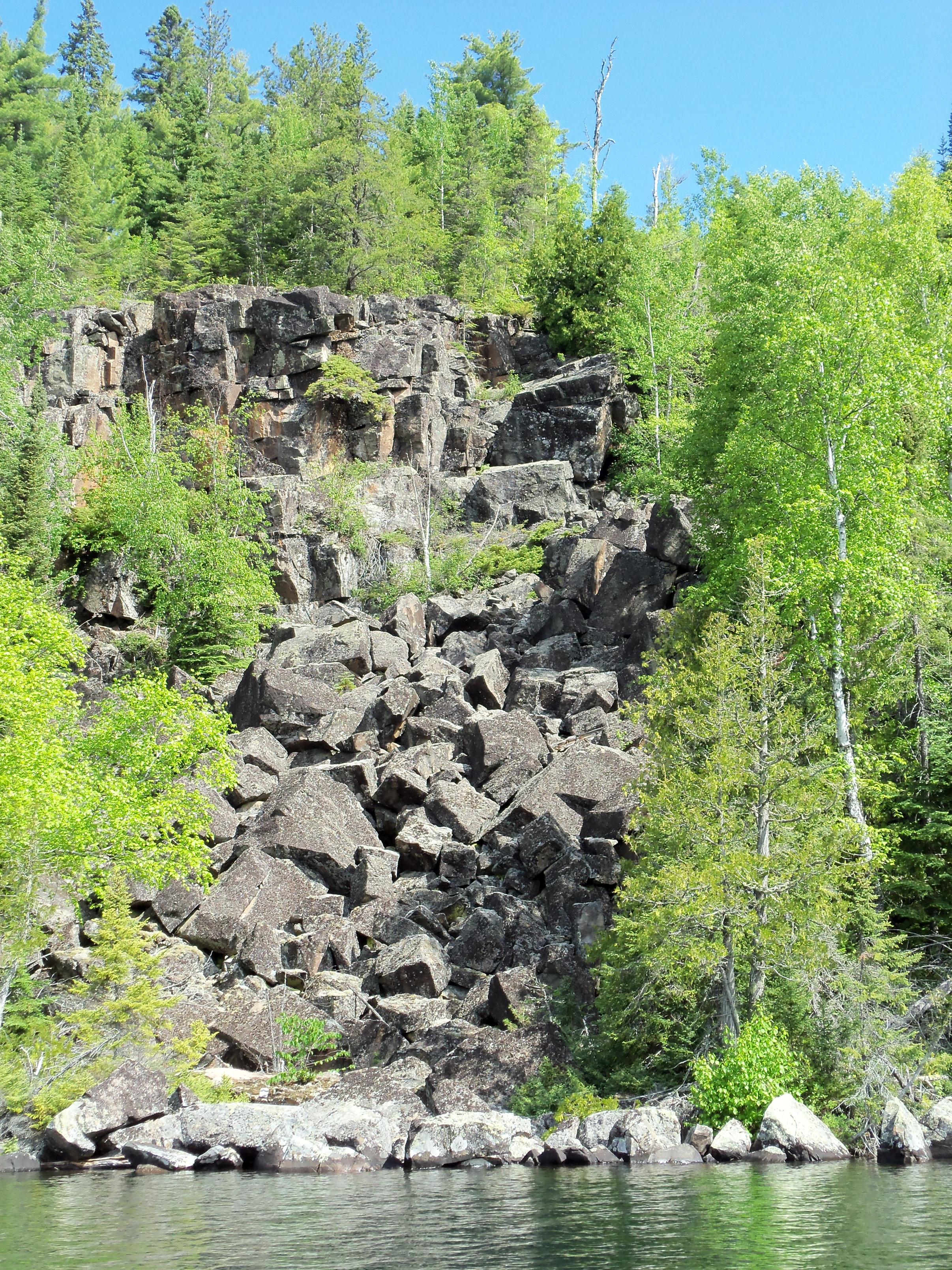 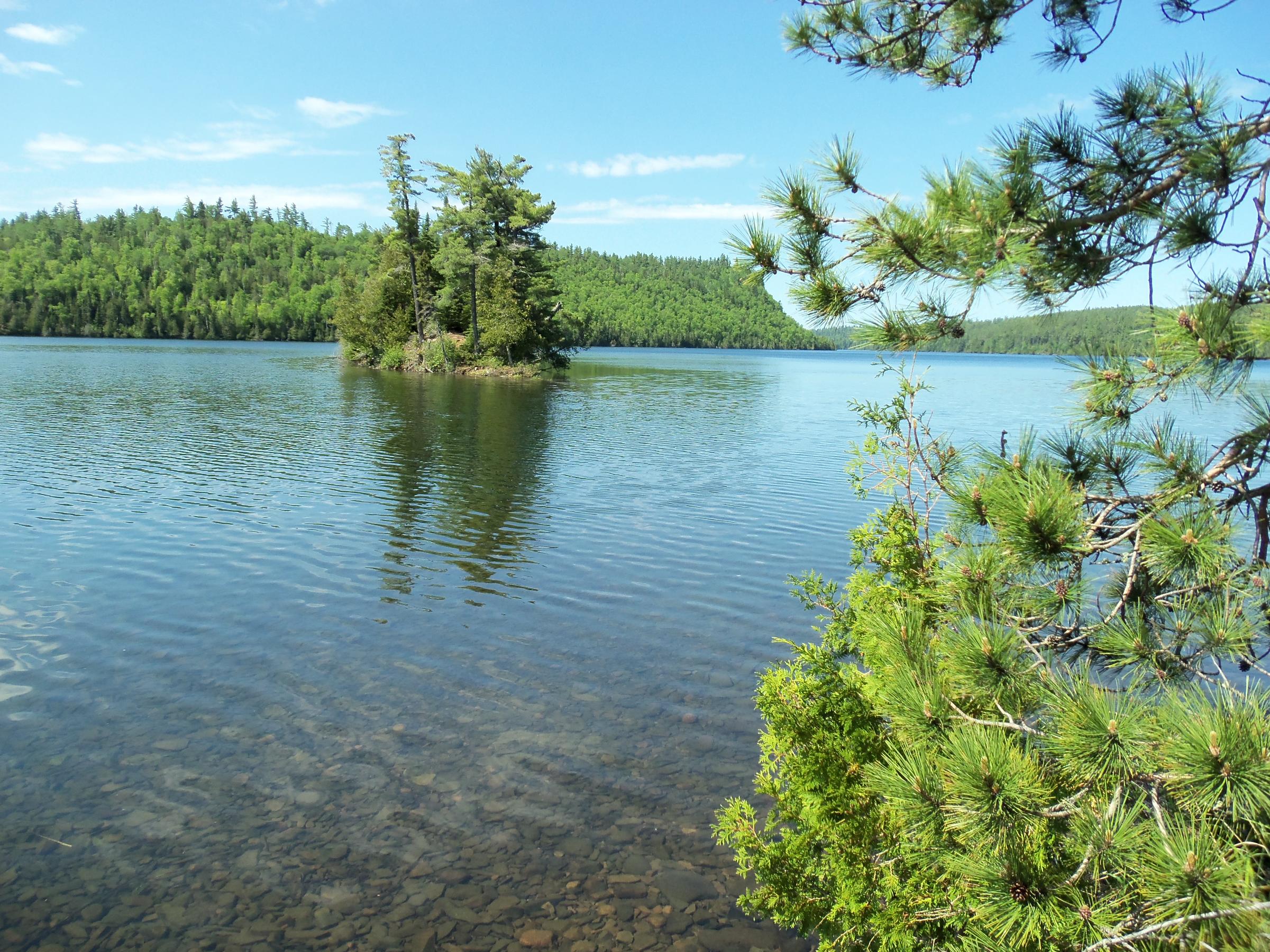 Arrived at the portage landing to West Pike just after a father & son duo that I had been following down the lake. Chatted with them for awhile as we each unpack our respective loads. Apparently I had missed seeing a cow & calf near one of the campsites. They inquired about my blue barrel & we talked about gear before heading off down the trail.

I took my first load to the intersection where the Border Route Trail branches off to the south & set it down there to serve as a marker. There actually is a sign. But, it is probably about 10 yards further down the BRT back in the woods. And, if a person didn't know what they were looking for? They'd likely miss it. As I met Ross & Kelly I told them to set there gear there as well, or to continue on along up the BRT if they still had some wind left in their sails. 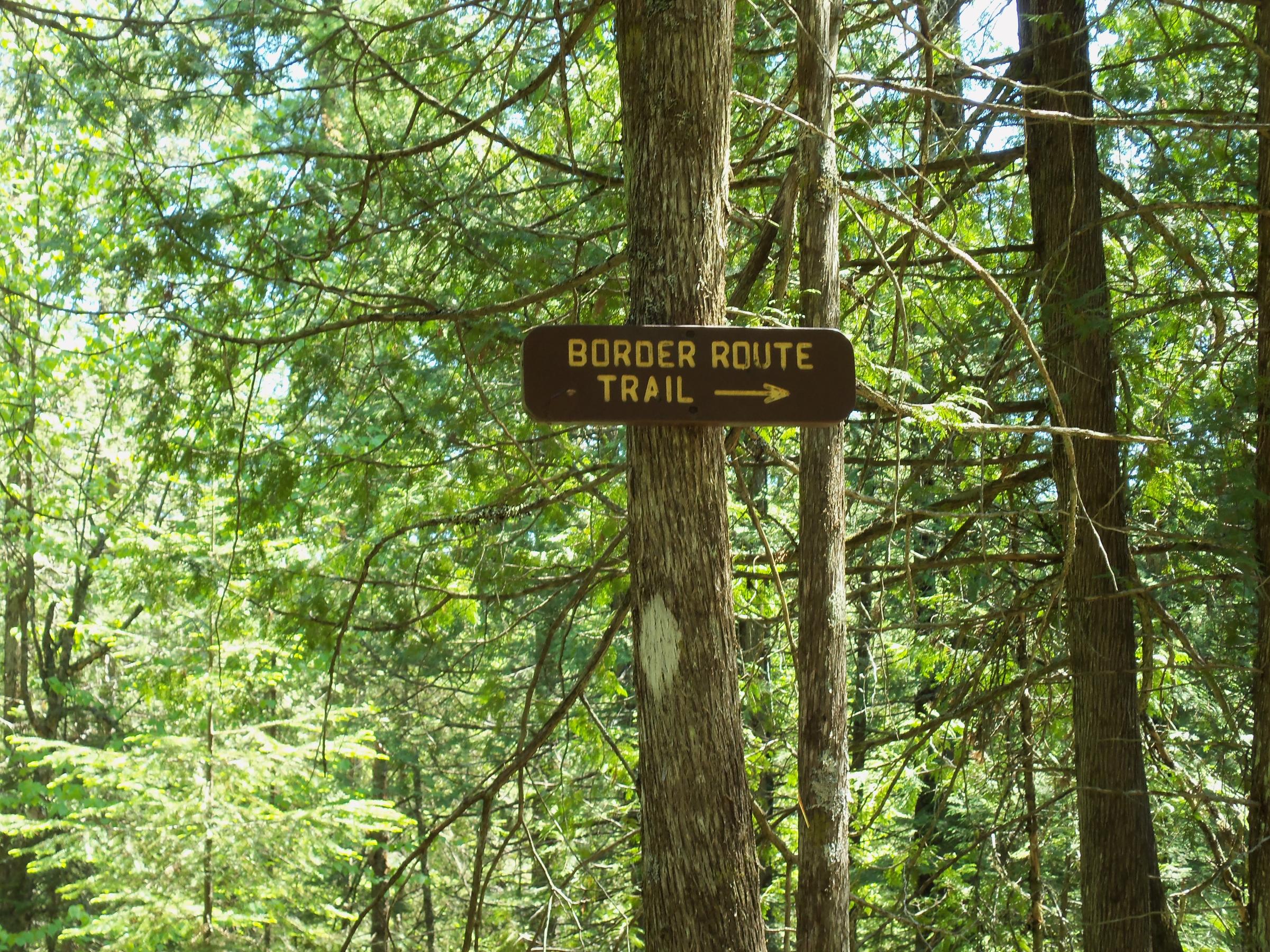 Near Clearwater lake there is a tremendous white pine along the north side of the trail. Mother Nature had splashed on her most familiar northwoods perfume quite thick today. As the scent of fresh pine permeated the air & had some serious staying power. Even after coming back across the portage a second time, there was still a very noticeable invigorating, pungent aroma. 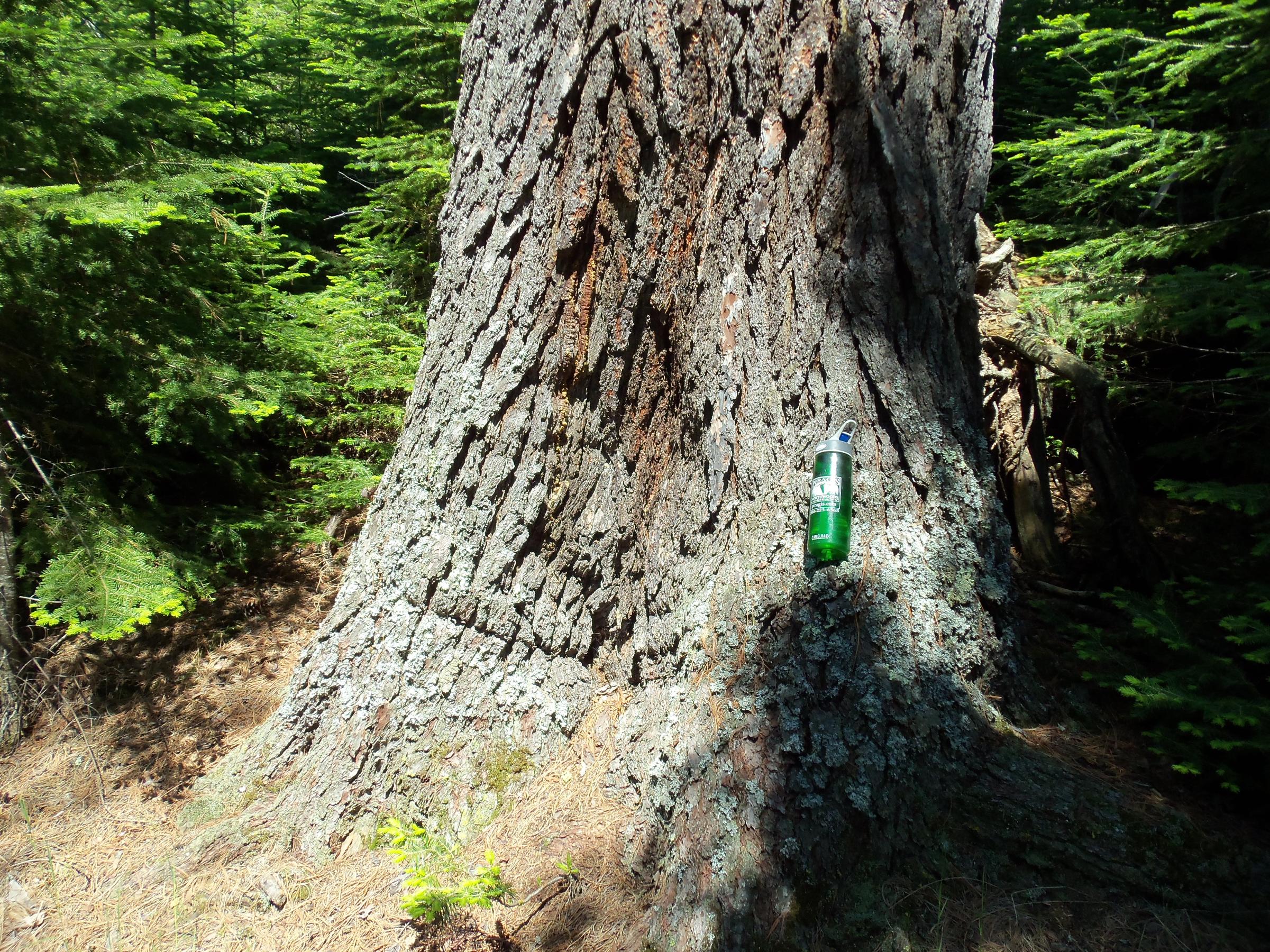 Essentially, we did the portage up to Gogebic in stages. First we brought everything to the BRT cutoff. A short distance later the trail crosses over a bridge that spans the small creek running between Clearwater & West Pike. It's a really neat spot. And, of course, the resulting high water from all the recent rains added to this magical wilderness hydraulic display. 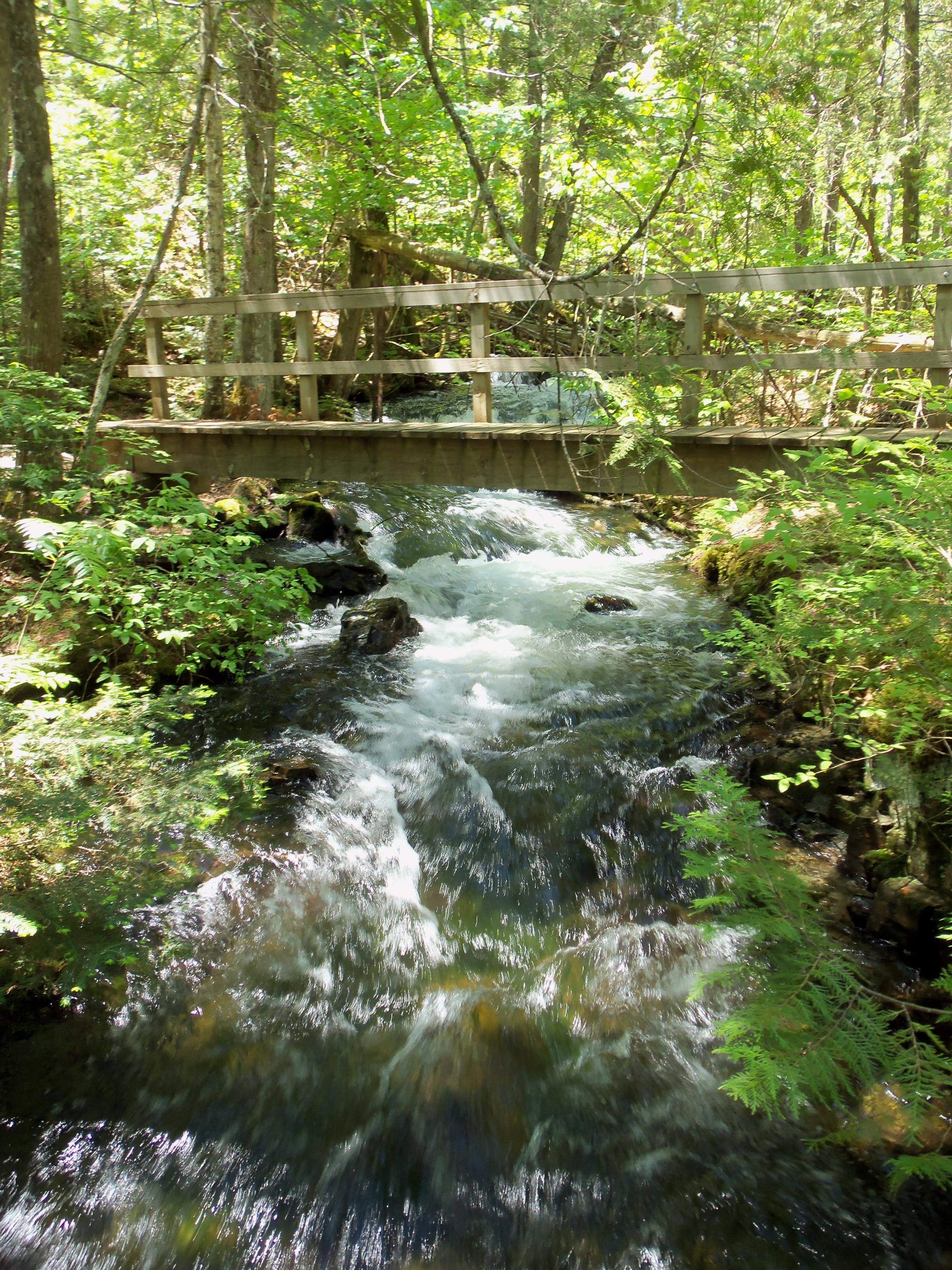 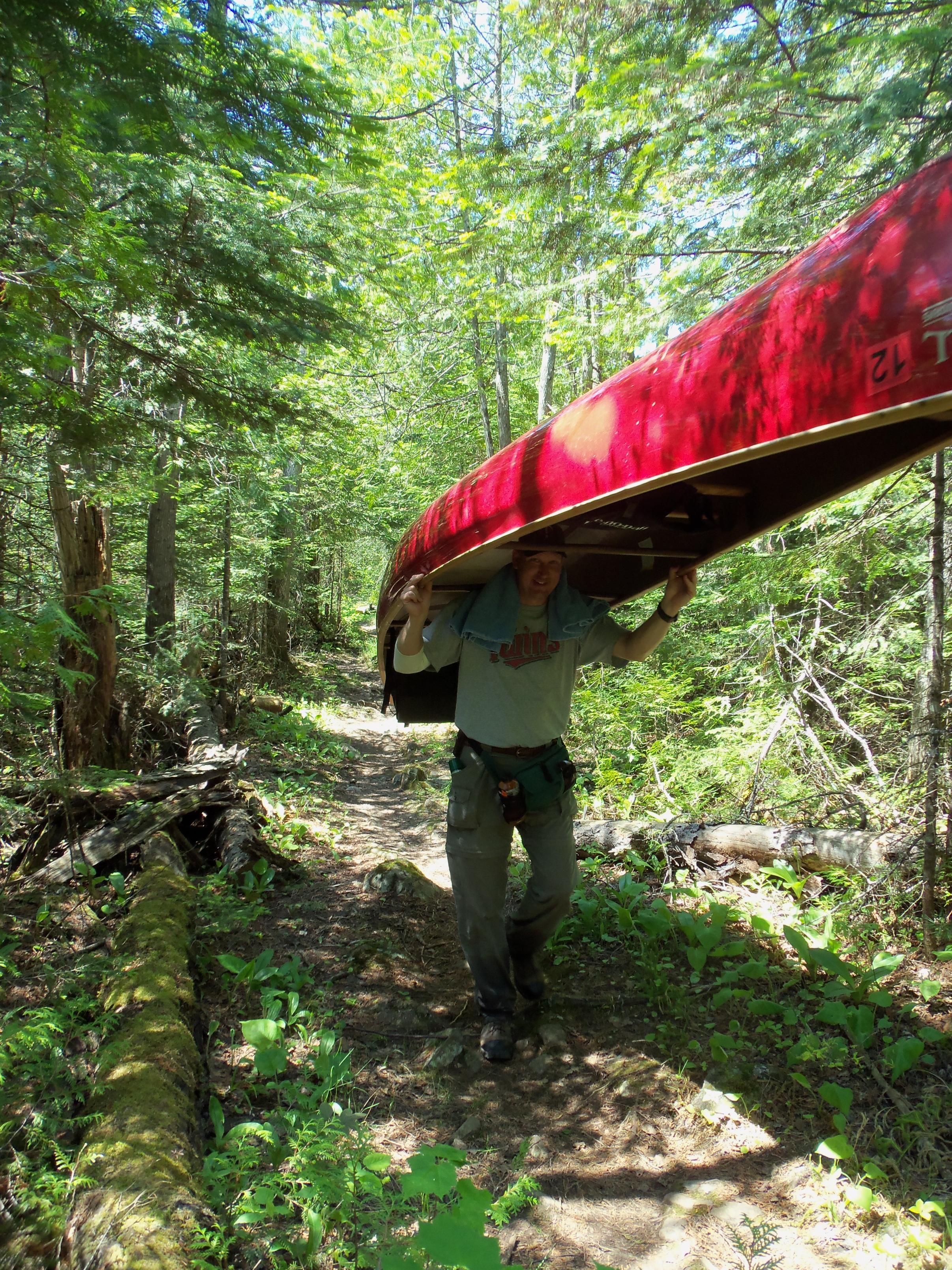 After crossing the bridge is where things start to get interesting. While not overly steep, the trail begins a long steady climb. This, in & of itself, requires more than a fair share of exertion. Couple that with the fact that, for most of the climb, the footholds are almost all exclusively round, knobby, protruding rocks. Perhaps a re-routing of the trail has contributed to this condition? As there are a number of enormous trees that have all fallen curiously parallel to the trail throughout this section. Compacted soil & pine duff are finally encountered again as the trail mercifully levels off. It even begins to gradually creep back downhill. This is something of a mixed blessing. As all the elevation just lost needs to be regained again (and then some) on the final ascent.


There is a "T" in the trail before it makes the final climb. This served as my next drop off point. Kelly & Ross, eager to see if indeed there was a lake at the top, pushed on up the hill.

The final hill actually has some of the steepest sections. But, the condition of the trail is in better shape making this ascent a bit easier than the previous climb. Of course slowly emerging from the dense, dark forest back into the "light" adds an element of heightened anticipation as well.

Perhaps my greatest fear of attempting this route was the potential for the canoe campsite to be occupied. (Looking back; After setting the packs down, perhaps it would have been more prudent to climb up to Gogebic without the burden of packs & canoe to insure campsite availability?) Fortunately there was no need for worry today. And, while paddling across the lake, I refreshed my nearly empty bottle in the cool, clear waters of Gogebic lake. I believe there is a special kind of satisfaction in allaying ones thirst from the destination lake. That can only be fully achieved & appreciated after completing a long, arduous portage such as this. 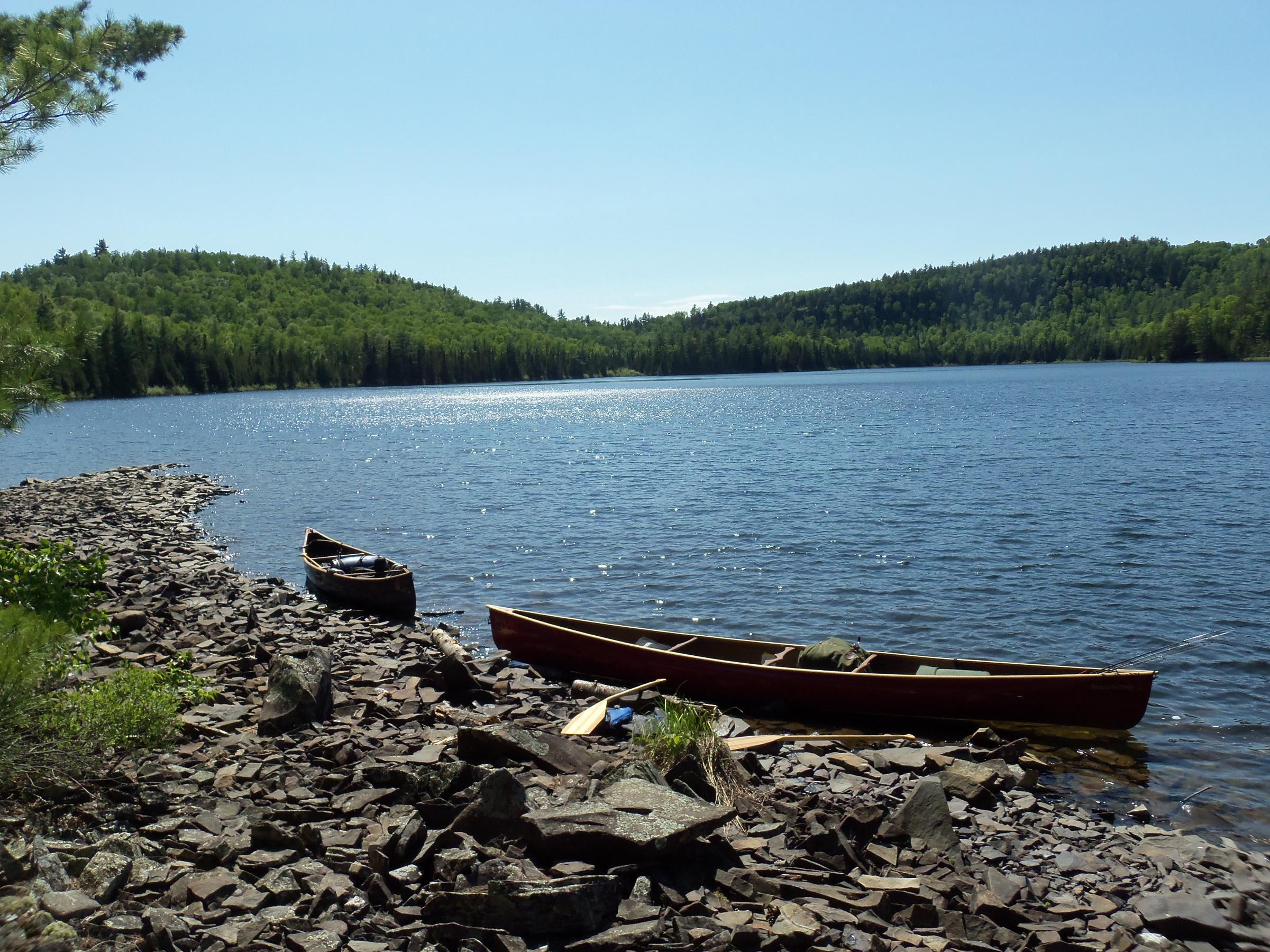 Camp went up fairly quickly. With all the immediately necessary tasks completed, Ross dug out some venison sausage, crackers & cut up some cheese. 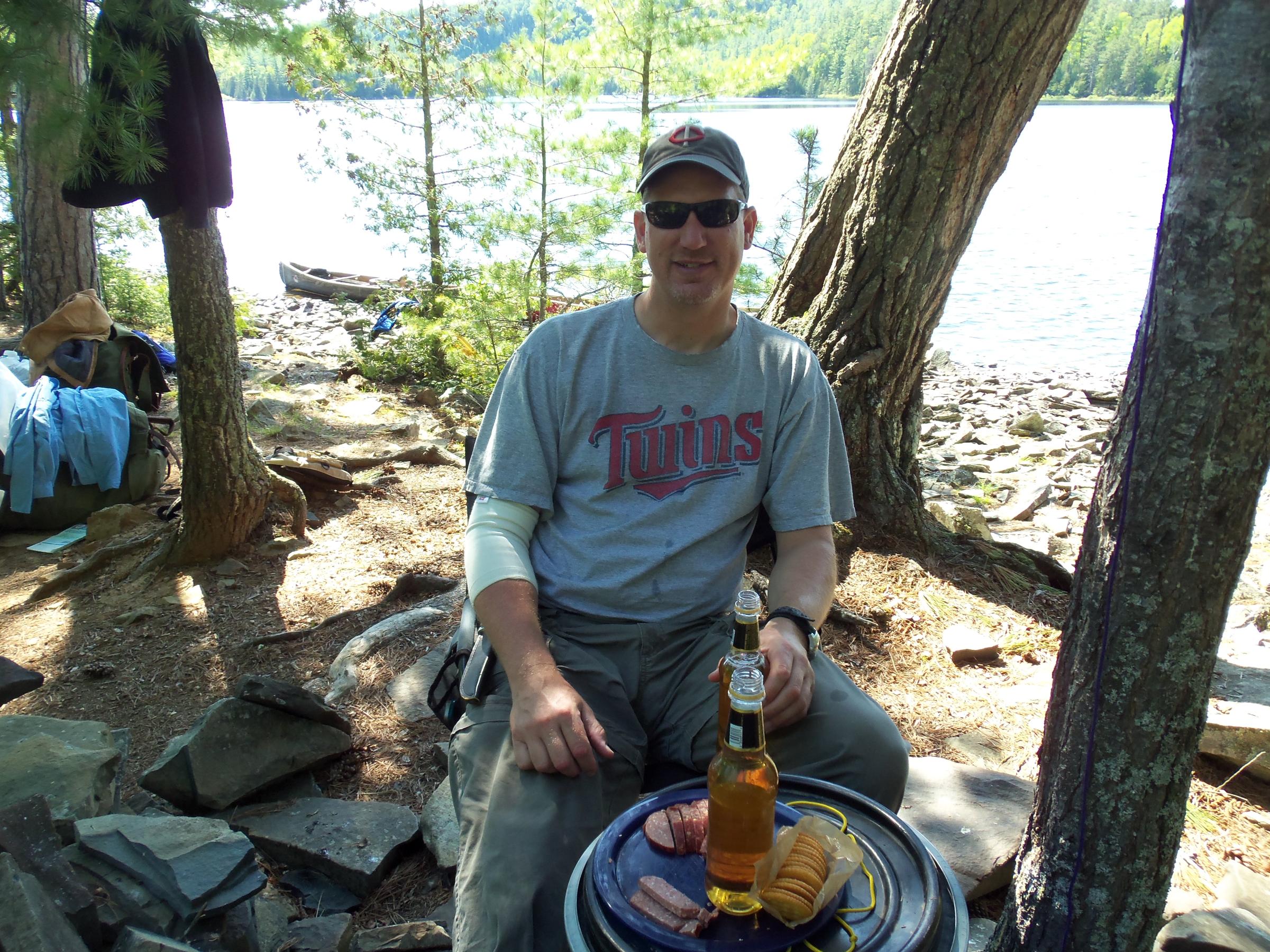 To wash it all down.... Ross & Kelly had somehow, somewhere managed to lug over a case of beer up. We used the small meat cooler (which had a couple frozen water bottles besides the frozen meat) to keep a few cool as we enjoyed the ones we'd just pulled.


We hung around camp, relaxing,recouperating & being rejuvenated by the hamburgers & brats we'd had for an early supper. (The steaks were still rock solid, so we'd let them thaw for another day while contributing to the cold beer cause.) 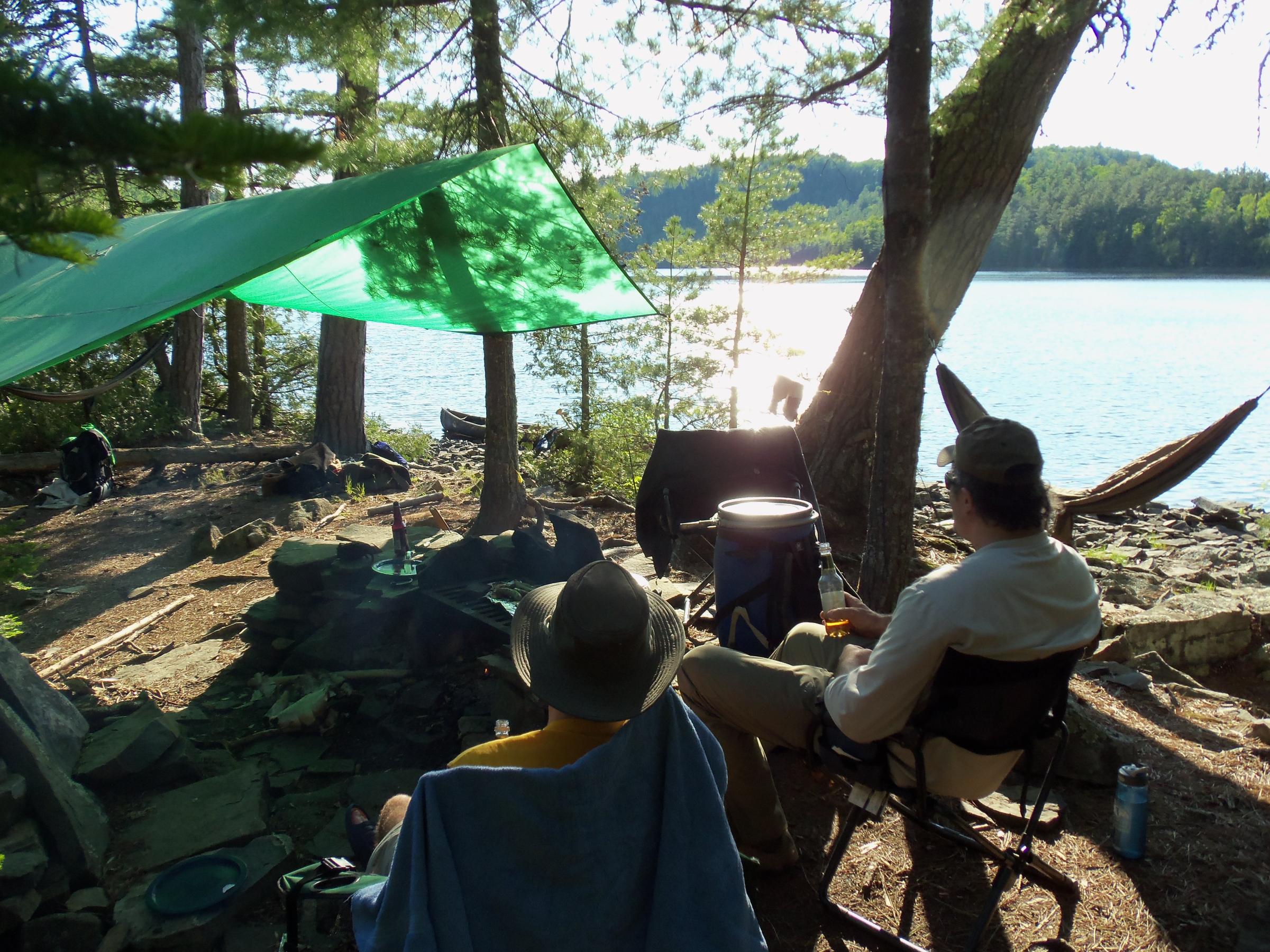 After supper Ross & I decided to paddle around the lake a bit & check out the neighborhood. There was a pair of loons out on the lake. Inevitably, in our travels around the lake, we paddled right past their nest. 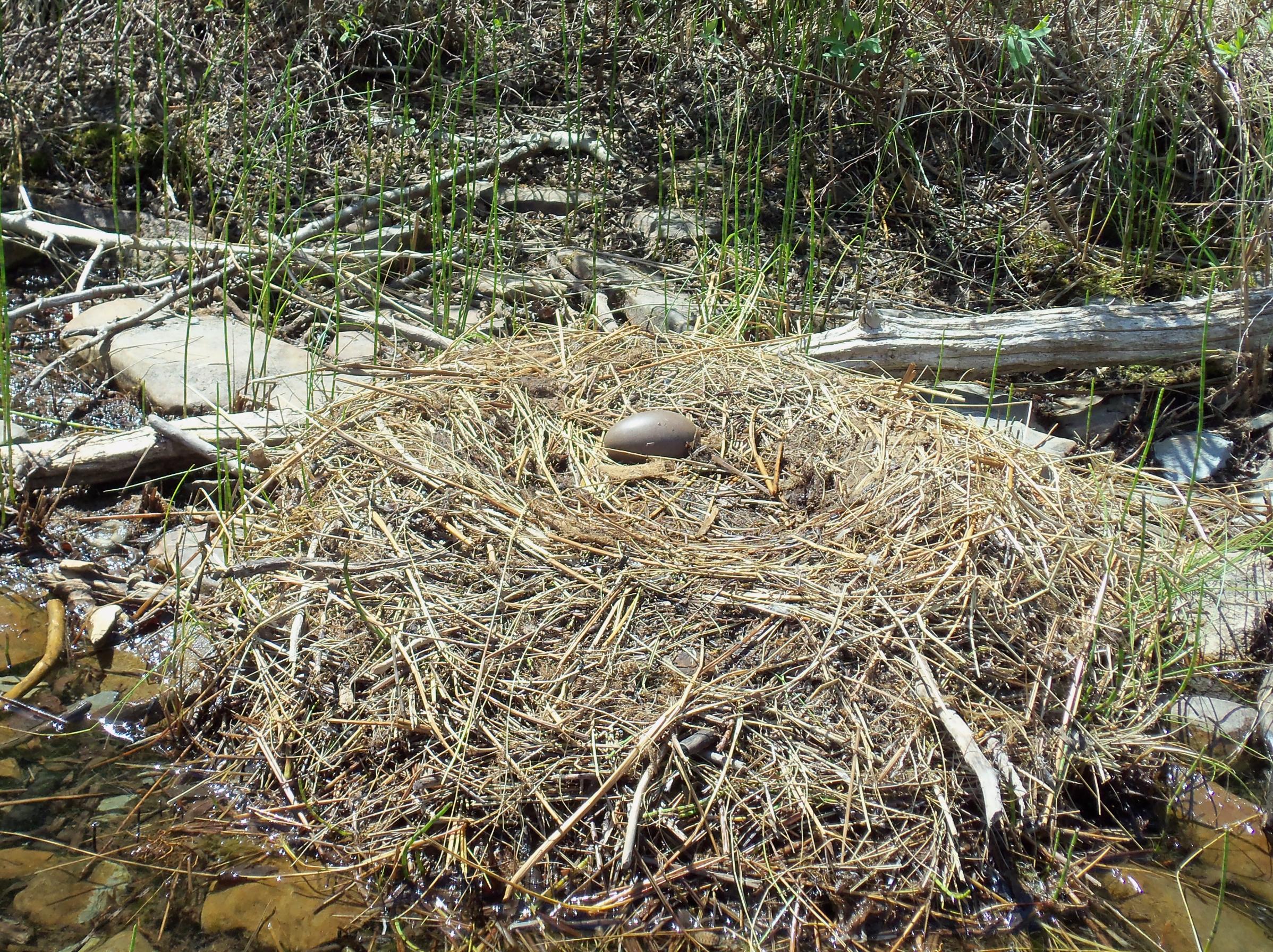 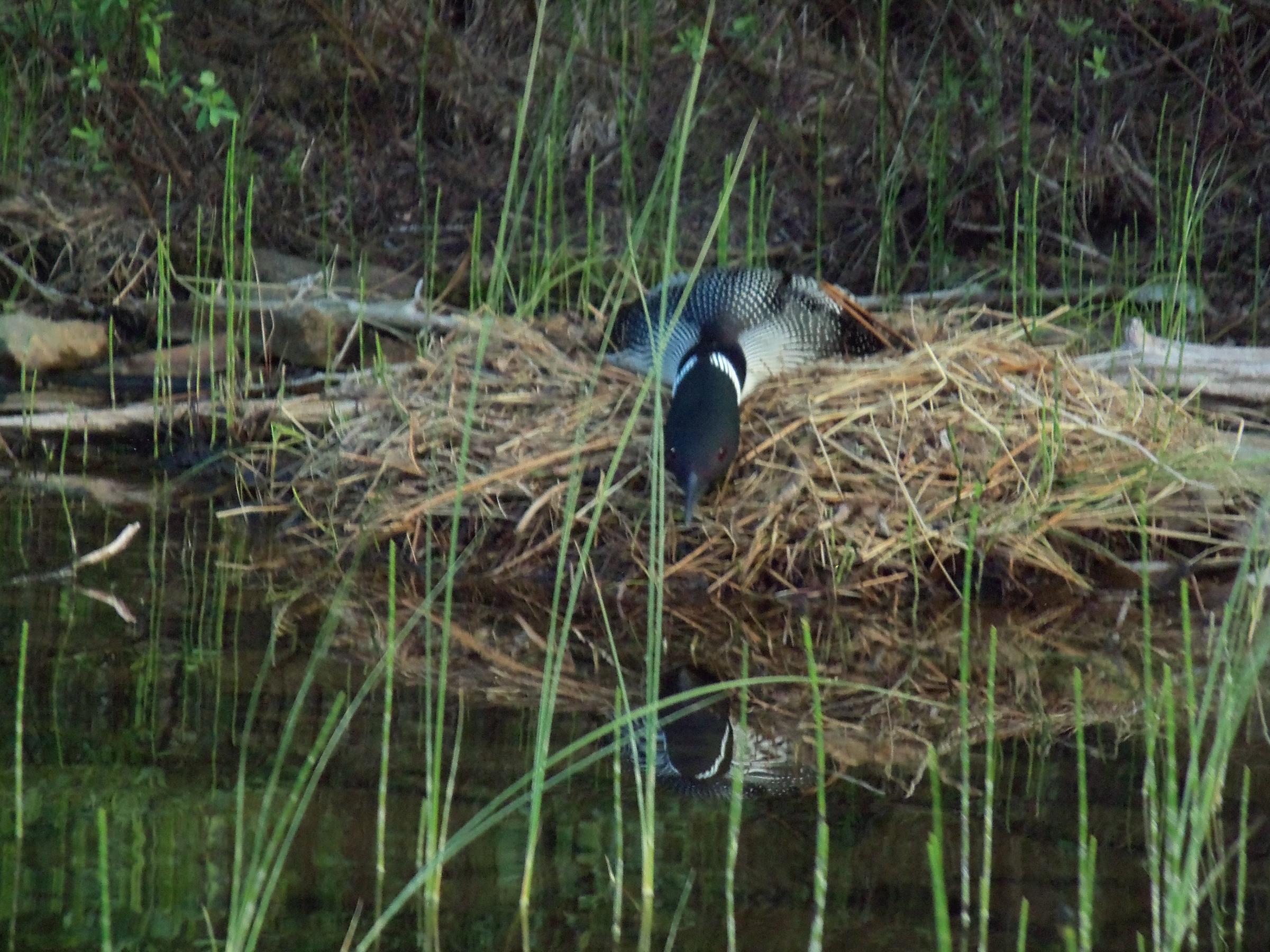 Usually mornings & evenings they were on the nest. But, occasionally, during the day they left it unguarded.


There were also other "neighbors" who were more demonstrative with their greeting.

As a gorgeous evening fell, we paddled back to camp where Kelly had a nice blaze burning. We played cribbage & enjoyed a few of the cold beers. It had been a fairly tough day. So, hoping to fully recharge my batteries for tomorrow, I turned in early. 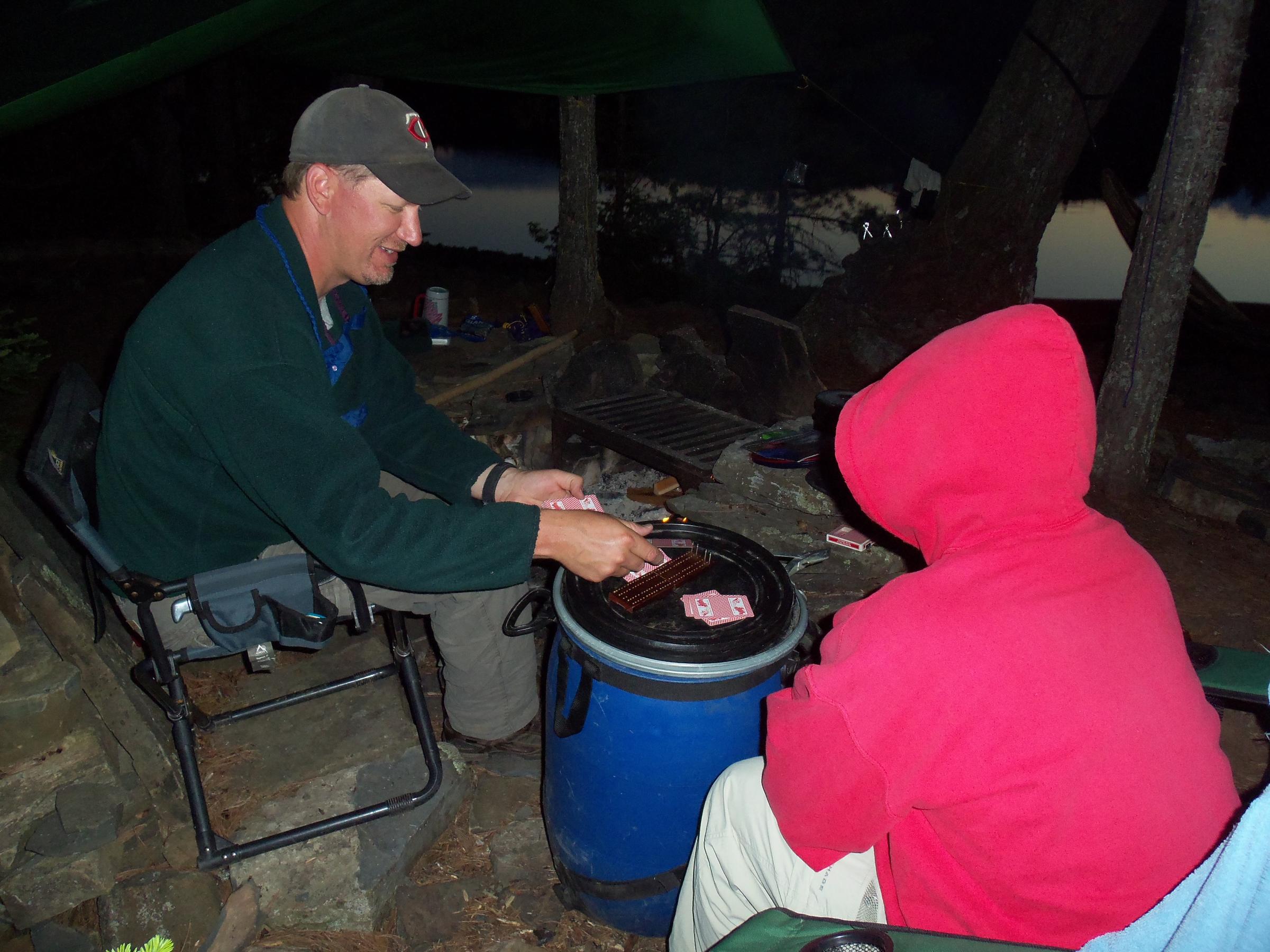