Trip Type: Paddling Canoe
Entry Date: 06/15/2012
Entry & Exit Point: Other
Number of Days: 6
Group Size: 1
Trip Introduction:
I paddled two lakes on Crown Land in western Ontario.
Discuss Trip: View Discussion Thread (22 messages)
Report
I wanted to be alone, so I arose at 4:30 a.m. and drove to western Ontario by way of International Falls, Minnesota. By the time I reached the logging road that gave me a head start into the bush, it was five-ish and I was pretty tuckered, so driving through the puddles, across the streams, up and down the dangerous grades, and over the rocks that looked like stone hatchet heads fashioned by giants, I was pretty tuckered and therefore amazingly calm, as if I were sucking nitrous oxide. About seven miles of bouncing put me lakeside and I paddled a long canyon to reach my first campsite, which wasn't any sort of campsite as Boundary Waters canoeists consider campsites, but rather a somewhat flat spot, cushioned with moss, on the end of a peninsula. After making camp, I fished for smallmouth and caught a few, did the same the next morning, and broke camp to reach the next lake.

The next lake was reached by way of two easy portages, a beaver dam, and a pond. I pitched my tent on an island that has a real campsite with a fire ring and truly flat tent pads. The only thing it lacks is an easy place to enter and exit a canoe. Wood I'd gathered last year was still there and plants were in the fire ring, so if someone else had come and gone, it hadn't been recently or they hadn't lit a fire. My wood was quite wet after a year of sitting and I soon learned that where there's smoke, there isn't always fire, which has me distrusting other truisms and from here on out, I'll assume that the Pope is a Protestant and that bears use public restrooms.

Most of western Ontario is pretty wild, but that doesn't mean that folks haven't been just about everywhere. Most of the ones I've encountered are Canadians and they have a make-do attitude. You can see this in the photo of the rusted metal rods, the bent and rusted grill, and the rusted graniteware kettle. I like finding stuff like this. They're precious artifacts to me, much like the rusted castaways one finds on the Chilkoot Trail. There are bigger artifacts that are quite common, like the boat in the photograph. The hull design and the rivets make it clear that this is an old boat. The moss and lichen tell me that it's been there a long time, but the real giveaway to its age is that it's being swallowed by the Earth. I tried to flip it, but I couldn't because the soil is creeping up on it. It's at beginning of a portage trail to another lake, a lake that teems with pike. The portage trail doesn't even look like a trail anymore, but if you bushwhack, you'll find another boat at the far end. This one is wood and down to its ribs. Anyway, I would stay on that island for the remainder of my trip because of a discovery I made, even though my original plan was to push north to another lake or three. The lake has two inflows and fishers know that fish love flow. However, last year I fished the major inflow and caught merely one fish. I discovered my mistake this year, which was fishing too close to the rapids/waterfall. This year, I fished about 150 yards down from the whitewater and caught walleyes.

I typically target bass, but after reading about the affection that many bwca.com folks have for walleyes, I concentrated on them. Rather, I'd fish for them and then fish for the bass and then bounce back to walleye. They were easy to catch and there were so many that I couldn't fish out the area. Rather, I was fishered out, again and again. My biggest was 26 inches and I caught a 25- incher and about half a dozen 24-inch fish. I also caught a number of 18 and 19-inch bass. The walleyes, in their regalness, reminded me of Meryl Streep. Ms. Streep has serious acting chops and the walleyes have serious choppers. Over 22 inches or so, they also had serious pulling power. The bass reminded me of Goldie Hawn, circa 1969. Like Hawn, the smallmouth were perky, zippy, and zany. There were also pike, which are the Kardashians of the north. They are such drama queens with their canoe-side hissy fits.

I only saw one other canoe atop a vehicle going and coming from my trip, but I did encounter two canoeists up there. They were female small animal vets and that they were female didn't surprise me, since about the half the canoeists I meet up there are female. They were Canadians and just passing through and the scuffs and scars on their dry bags told me that they weren't rookies, but the stern paddler had a plastic bag for rainwear and that also didn't surprise me, since I've met many Canadians who make do with their can do attitude and scraps of plastic and metal.

I came home 1.5 days early because my hands were cut and punctured and I ran out of bait (I'd used one pound of leeches and two dozen crawlers.) and the lures the walleyes preferred, thanks to those finned Kardashians. I did see two bears and plenty of eagles and beavers. I didn't see any otters, which I love to see. I saw one of the bears on the shoreline across from my island and I was in the canoe at the time, so I yelled at him to discourage him from visiting my campsite. He bolted and I never saw him again. There were amazingly few bugs. Bugwise, it felt like August, but without the ankle biters. Praise Permethrin!

It was a good trip and I came away with much more respect for walleyes. Now I just have to to find a way to discourage pike from hitting my lures. By the second day, I wouldn't cast at weeds or troll in the middle of the lake. That helped, but I still lost a lot of lures. I'm thinking of switching to braided line. I sure enjoyed using several items that you folks introduced to me, like my new Kevlar canoe (Rockstar), a seat pad, a portage yolk, a kneeling pad, and Permethrin. I also carried a PLB, which greatly reassured my father. I also bought a device that mounts my camera on a thwart for self-photography, but I accidentally left it in the car.

I'm doing two more trips this year. One is with a woman I met through this site and another is with an outdoor writer that I've read for years. I'm planning to take the outdoor writer to the walleye-rich water that lies yonder of the falls. The woman and I are intending to reach a lake that requires a nasty portage where there's likely no trail. If we can reach that lake, we'll be fishing a lake that perhaps no living person has fished because this lake is too twisty and freckled with islands to permit float planes and either you bushwhack to reach it or paddle and portage many, many times. Perhaps someone has done it the last fifty years, but I doubt it. Either way, we'll soon see or be beaten back by the bush! 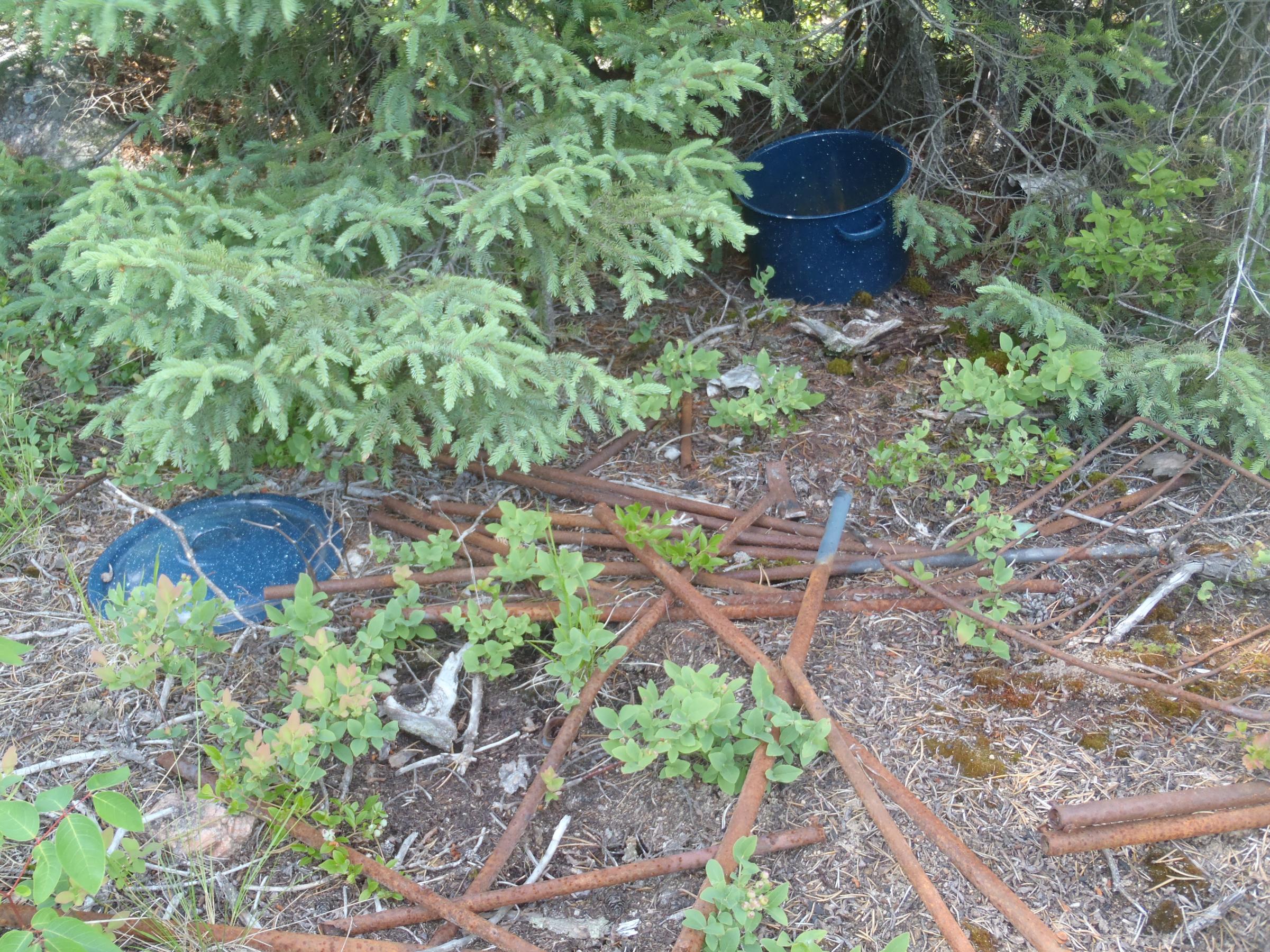 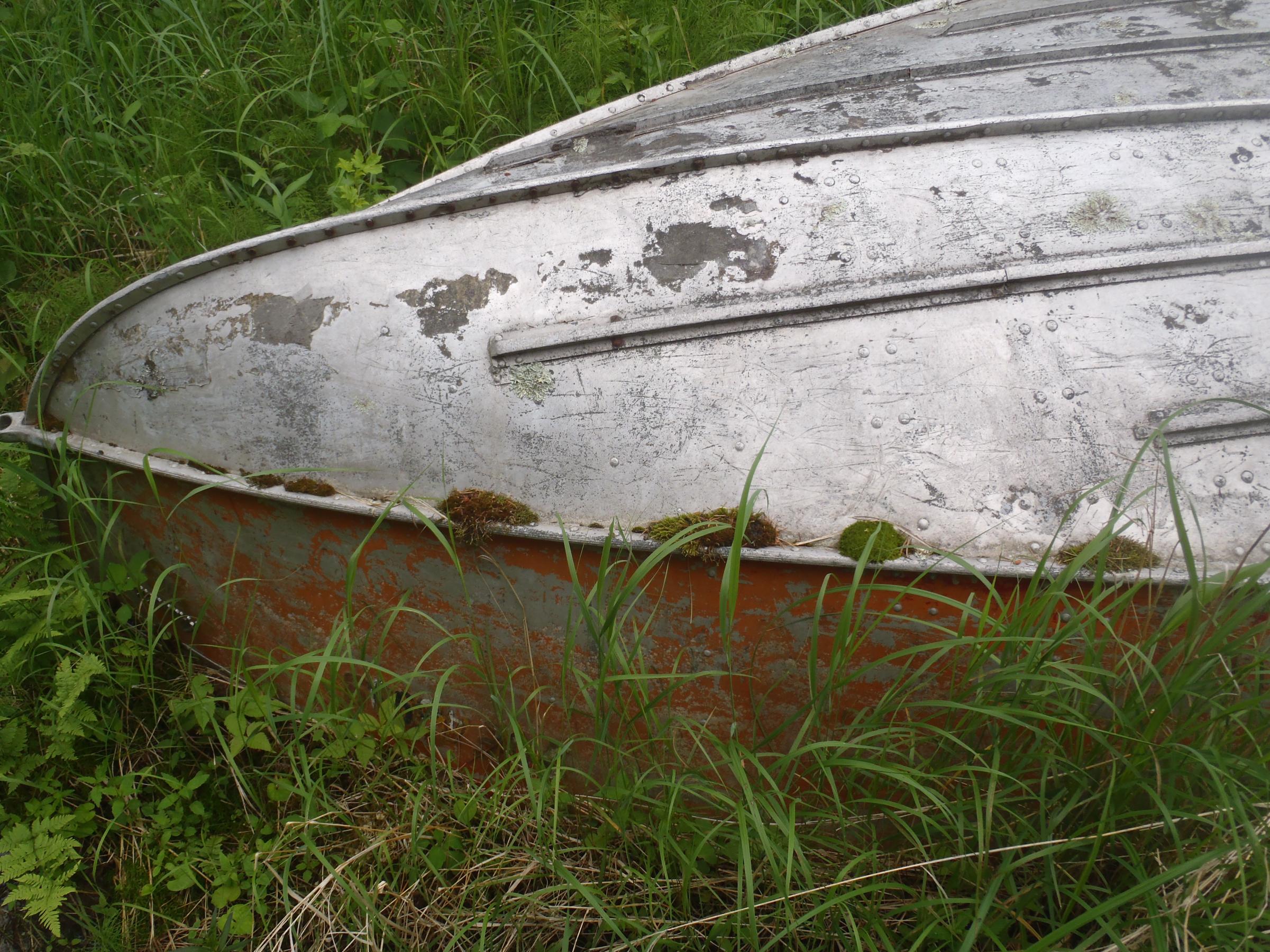