Trip Type: Paddling Canoe
Entry Date: 05/21/2012
Entry Point: Little Vermilion Lake (Crane Lake) (EP 12)
Exit Point: Seagull Lake (EP 54)
Number of Days: 26
Group Size: 1
Discuss Trip: View Discussion Thread (11 messages)
Report
My trip started May 21 at Crane Lake, with a Little Vermillion EP. Was on the water about 10:30 and camped the first night south a bit on Little Vermillion Lake. I was not prepared for all the houseboats. An odd way to begin a trip. Day one was calm, clear and warm. That wouldn't last.

Day two it rained. And it kept raining. If the next 9 days I believe it rained on eight of them. I was told that during that time Basswood rose about a foot. I believe it. And that's not a complaint, actually. It would feel like a canoe trip without rain. I was paddling a 22 year old Will Ruch Wood Dacron. It's a 15 foot tandem with a bit of rocker that was outfitted with a kneeling thwart to paddle solo (worked well, as it's a rather narrow 31" at center). It's a lovely, lovely canoe. Camp two was at the north end of the Little Indian Sioux River. This was one of several little rivers on the route, all lovely. From there I went south to Lower Pauness and east to Shell, Little Shell, Lynx, Ruby and Hustler, camping on Hustler. Significant rain most of the time.

Day four was Oyster, Oyster River, Agnes, Boulder Bay of Lac LaCroix and then to Iron Lake and a campsite on an island just north of Peterson Pay. This one was interesting. It had been cold and rainy all day. I checked every site on Iron, finding nothing open. My route would take me through Peterson Bay to the Beartrap River, so the island campsite was my last hope as afternoon turned into evening. I was disappointed when I paddled up and saw a tarp set up. I decided to check with those camping there to see about throwing up my hammock. I "halloed!" at the shore, raising no one. I waited for them to return from their fishing outing, shouted again, waited some more. Finally, after more than an hour I trudged up the hill to the "tent" and saw that it was a large brown rock with orange lichen. There was no one there, just the tarp still set up. I was pissed. Please, don't ever, ever do that. People bypass sites when they see something set up. Very poor etiquette.
Day five, then, was on the Beartrap River to Sunday Lake (this is a primitive management area, so I obtained a permit in advance to camp on Sunday). Rained some, but not a lot. the portages were tough. Not maintained and at times a bit of a bushwack. Saw no one in the PMA. It was nice to be alone. The Lower Beartrap was beautiful. The upper river the next day was equally stunning. I highly recommend it. I even paddled down Spring Creek a bit just to see it before heading back and turning east into Beartrap Lake, where I camped for night 6.
The next day I did Gun, Boot, Fourtown, Horse, camping on the island farthest to the north for nights 7 and 8. I think this was the day I began noticing pain in my left achilles tendon. I figure out (too late) that as I was kneeling a fold in my boot (redwing irish setters) was pressing on the tendon. Everything became painful with it, especially portaging. I was fortunate on my layover that it was mostly sunny and I was able to air everything out. It started raining early evening and continued.
Day nine was a long day in a steady rain, although I was fortunate to hit a calm Basswood, camping at the Lewis Narrows just west of the Back Bay portage. My achilles that day was bothering me to the point that I was just shuffling through the portages and leaving my boot off in the canoe. Campsite ten was on the north end of Newfound Lake and it was decision time. This was supposed to be a 21 day solo. My goal was to paddle all the way east to South Fowl and then double back on the border lakes to meet a friend at Wilderness Canoe Base on Seagull for two more weeks in the Quetico. It was clear that I had three choices: slow down, take some time off and hope my tendon would heal over the next 10 days; pack my boots and wear my Keens on portages; had down to the Scout camp on Moose and call home for a pick up. It was a tough decision, but I went with number three. I had no confidence that I would heel while still wearing my boots. To portage on wet sloppy portages with my Keens was risking real injury. I owed it to my friend to be ready for our Q trip. I paddled down to the Northern Tier camp and called my wife. The solo leg was over at 11 days and 120 miles or so. My wife and the boys arrived to pick me up from the Twin Cities about 8:00 p.m. We spent the night in Ely and then bummed around town all the next day before heading home June 2 or 3.
Between then and heading back up for Q on June 11 it was very, very strange. I had to go barefoot or wear sandals the whole time, without having any idea whether my tendon would actually heal quickly enough. I studied up on things and bought a different pair of boots to relieve the pressure point (I got a pair of Simms Freestone wading boots -- fabulous. I highly recommend it.) I'll put the Quetico report up soon (The Hunter Island Loop--Seagull to Cache Bay, Falls Chain, Kawnipi, Poet Lakes, Sturgeon, Maligne R, Poobah, Conmee, Sarah, Prairie Portage, Man Chain, Cache Bay, back to Seagull--about 170 miles).

Now that the successful Q trip in behind me and all is healed, I'm over the disappointment of coming off the solo halfway through. It was very, very tough. Put into perspective, however, 11 days solo is still a chunk of time. It's just not was I had been planning.

I tried to get everything into one pack, but packing for 21 days just couldn't do it (and if I had it might not have been able to do single portaging anyway). I used a #2 Quetico Superior pack and a 60L Blue Barrel with the CCS Barrel Pack.

Gear that worked well for me on the solo: emberlit twig stove (amazing how little wood I used to cook) on dry days, trangia alcohol stove (inside the emberlit) for wet (fabulous and simple little stove); the Ruch canoe (can't say enough about it); my new Wright-McGill rain pants (stalked them for months online till I found them for $50, originally $200); SPOT GPS Messenger (let my wife know I was OK and plotted my trip on a map for later use); My Warbonnet Blackbird Hammock and Big Mamajamba Tarp (first time in a hammock. will never again do a tent. Hammocks are a bit fussy to set up, but amazingly comfortable and my clothes, bedding and I stayed bone dry during an historically wet week); CCS Barrel Pack and blue barrel (first time using a blue barrel. Kept the food- all dehydrated starting in January-unshmushed, well organized and dry). Will post photos in the next few days. 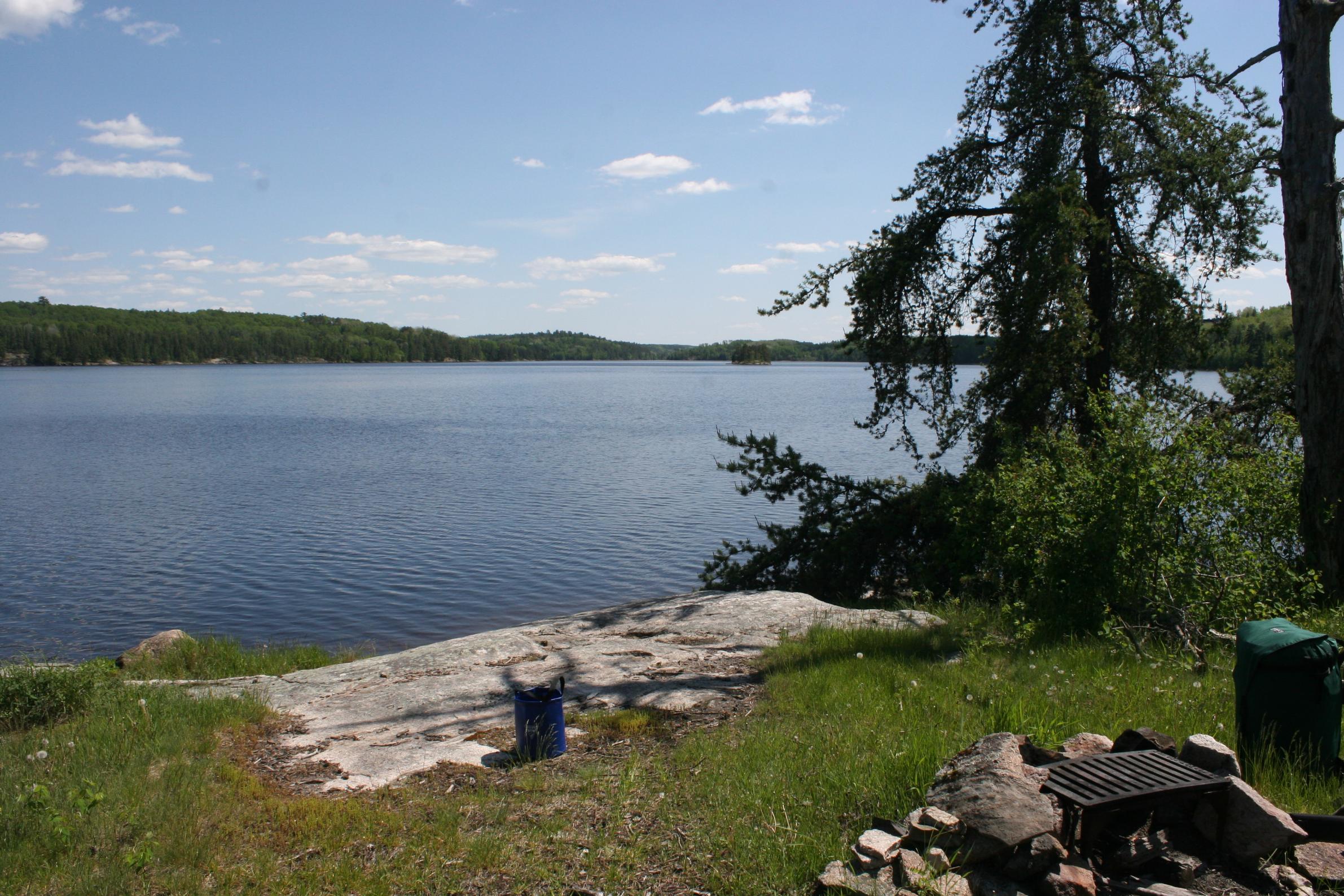 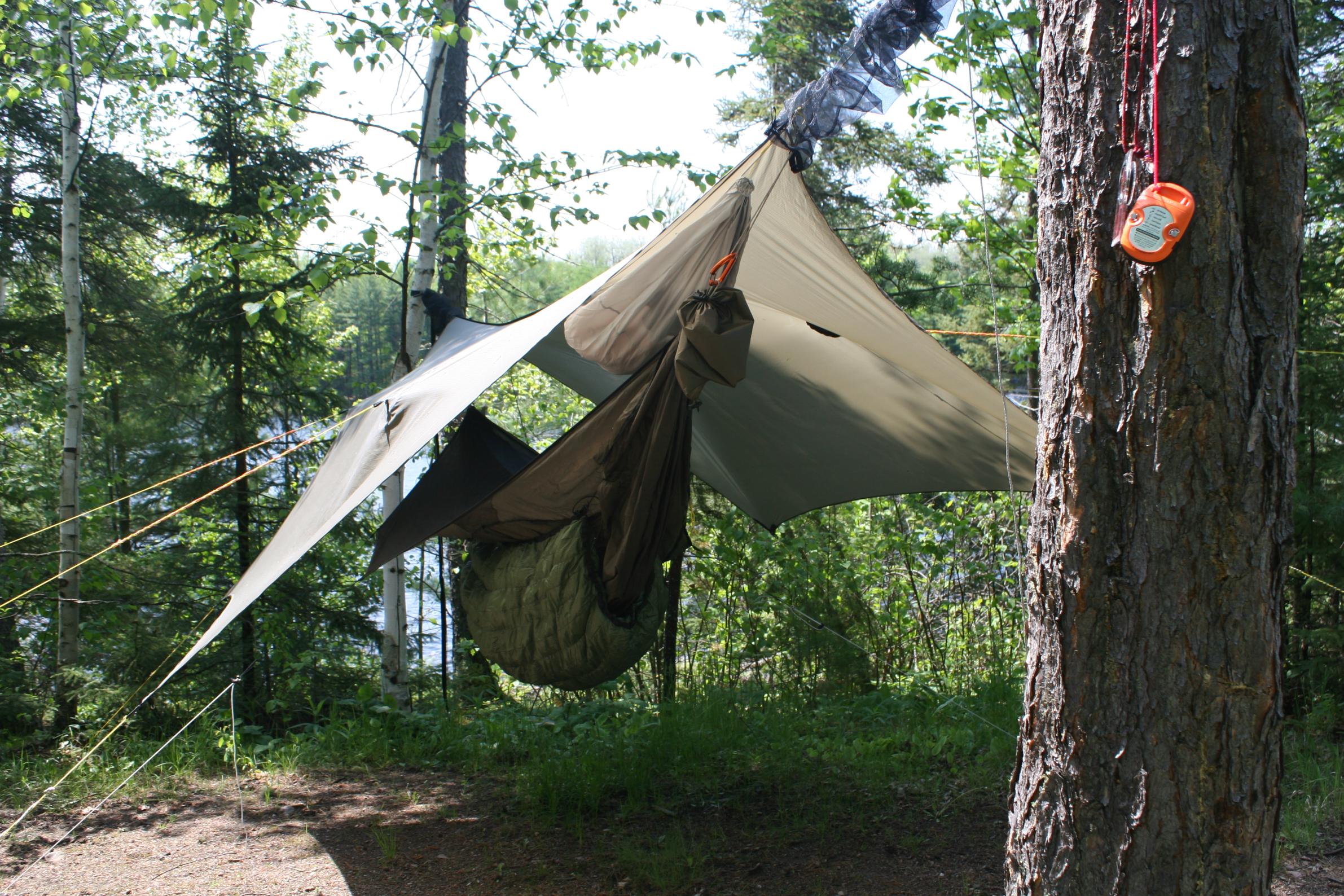 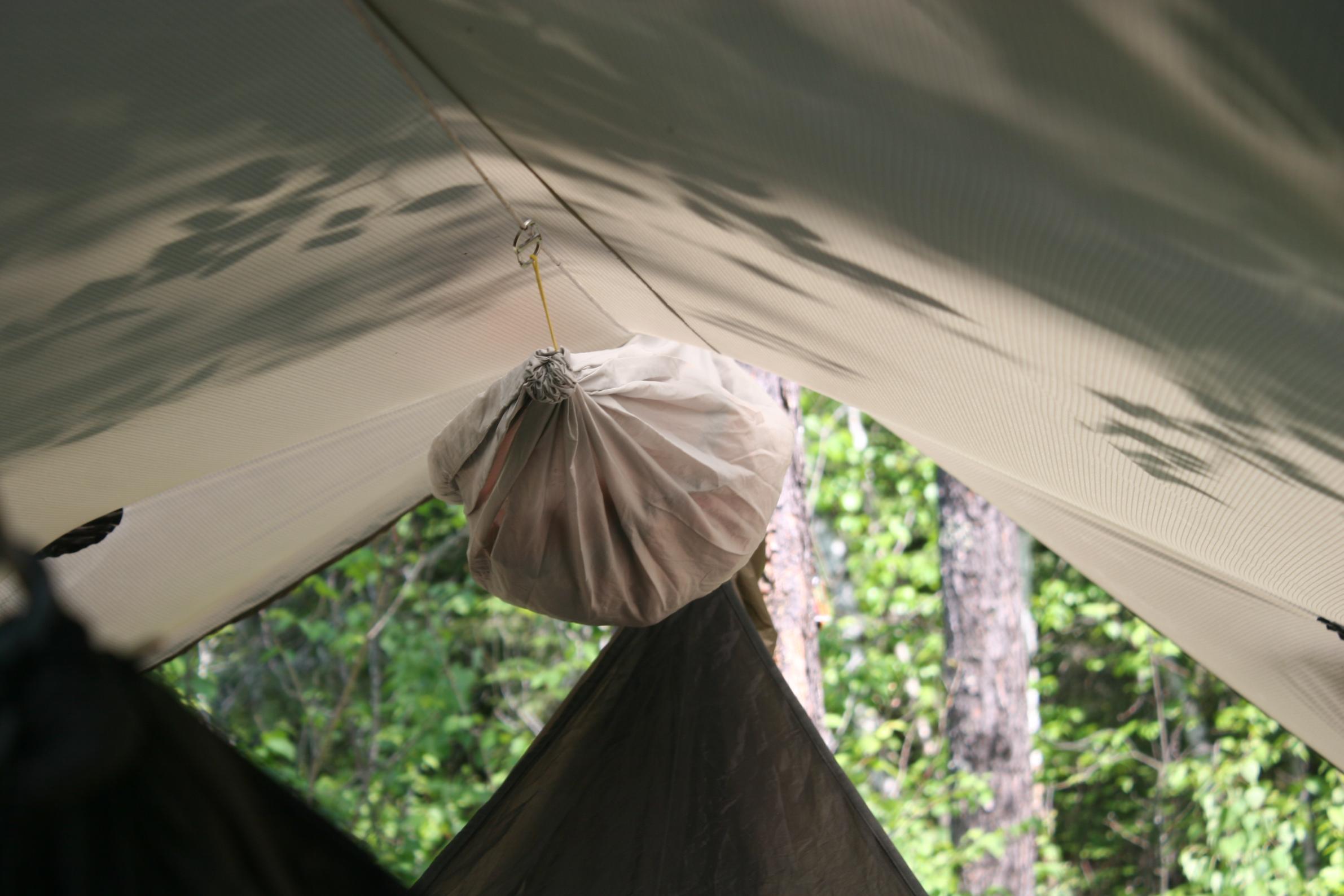 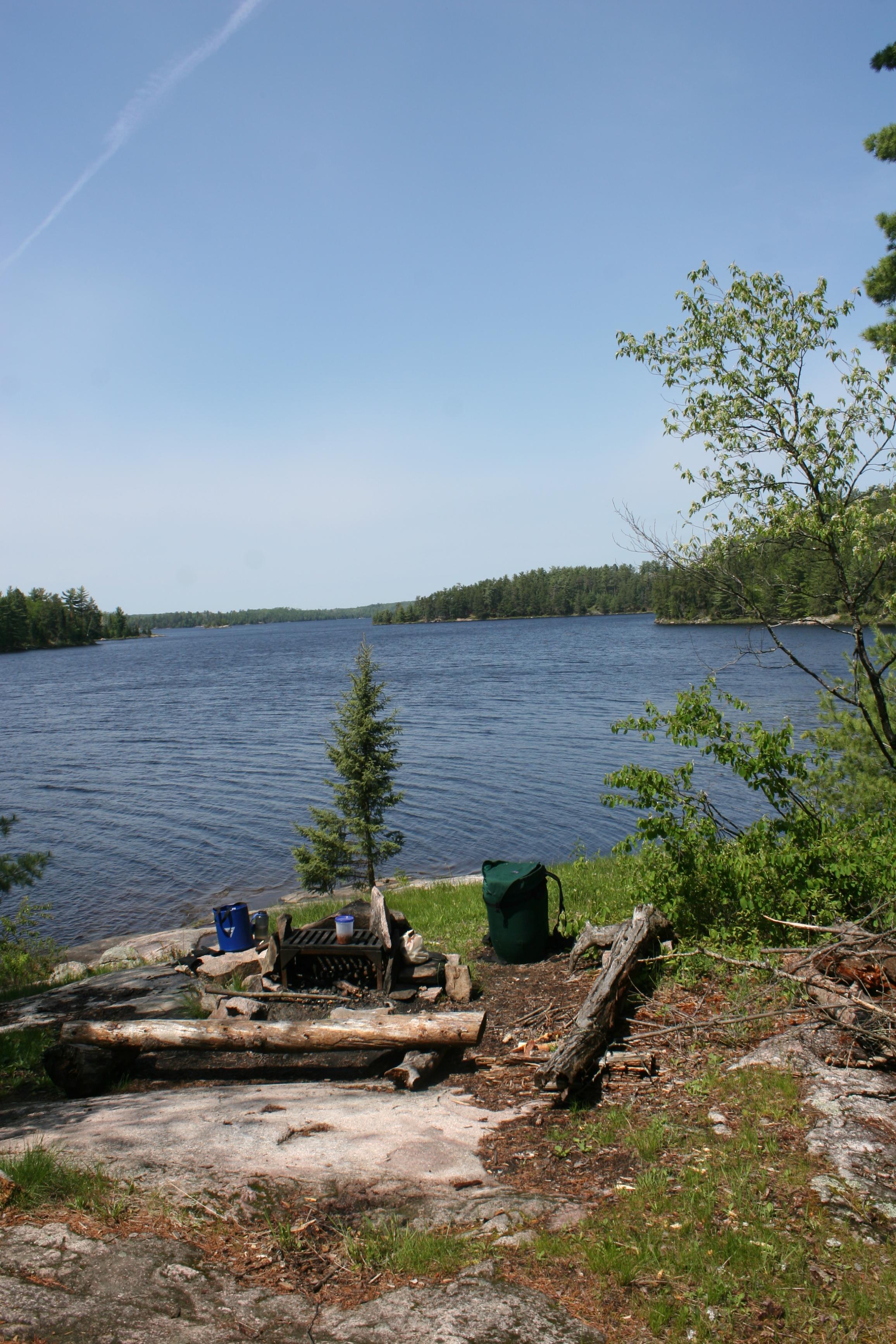 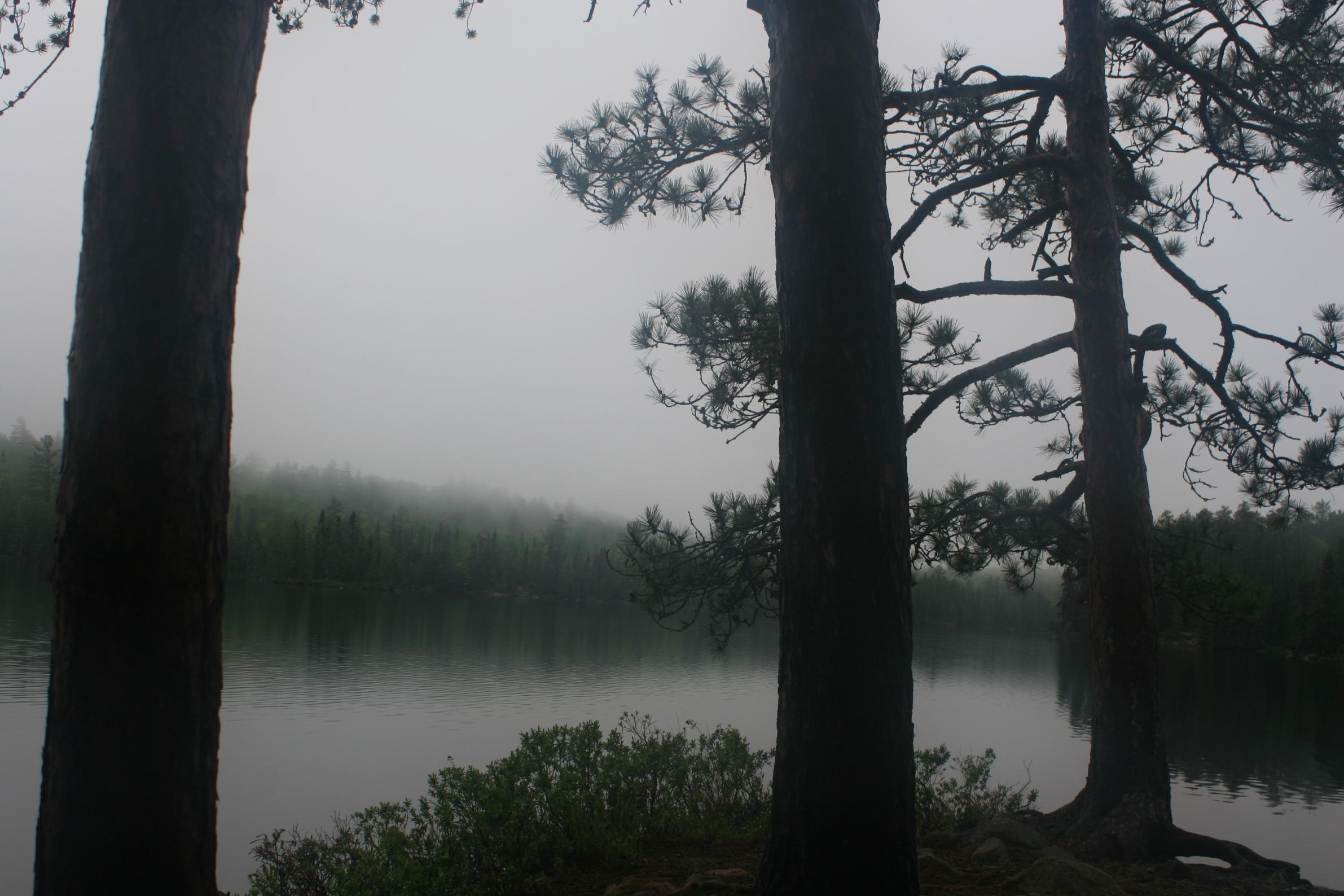 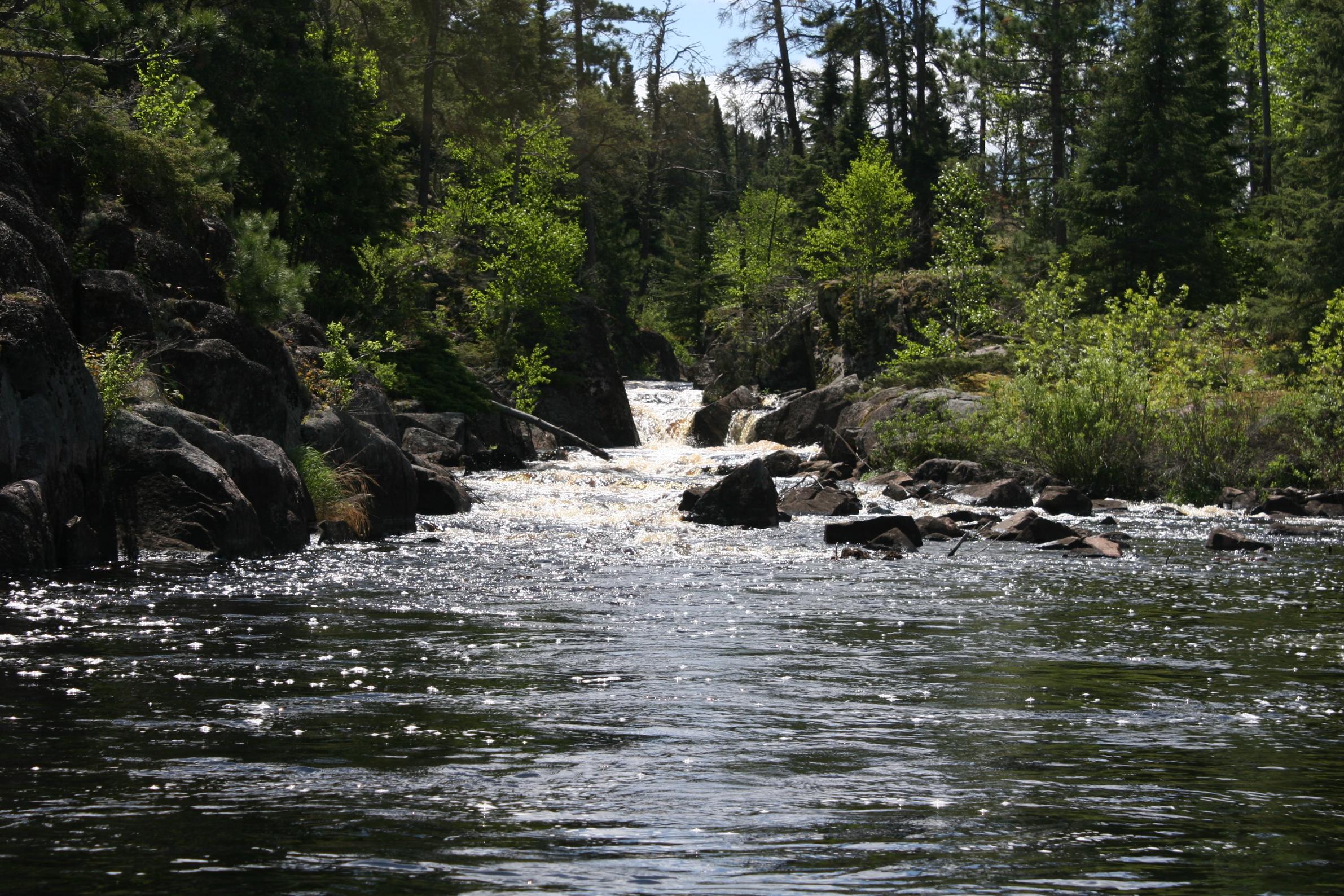 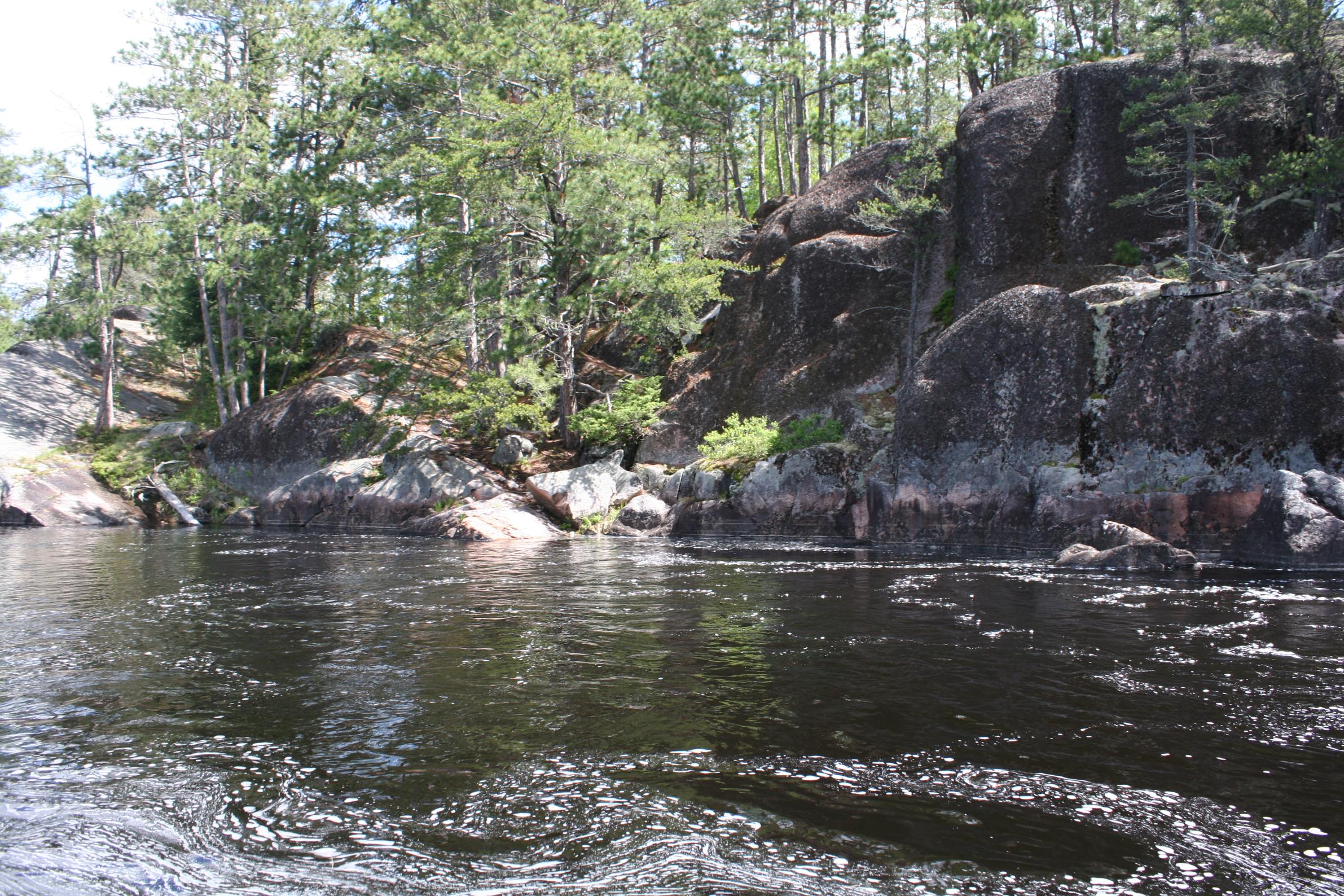 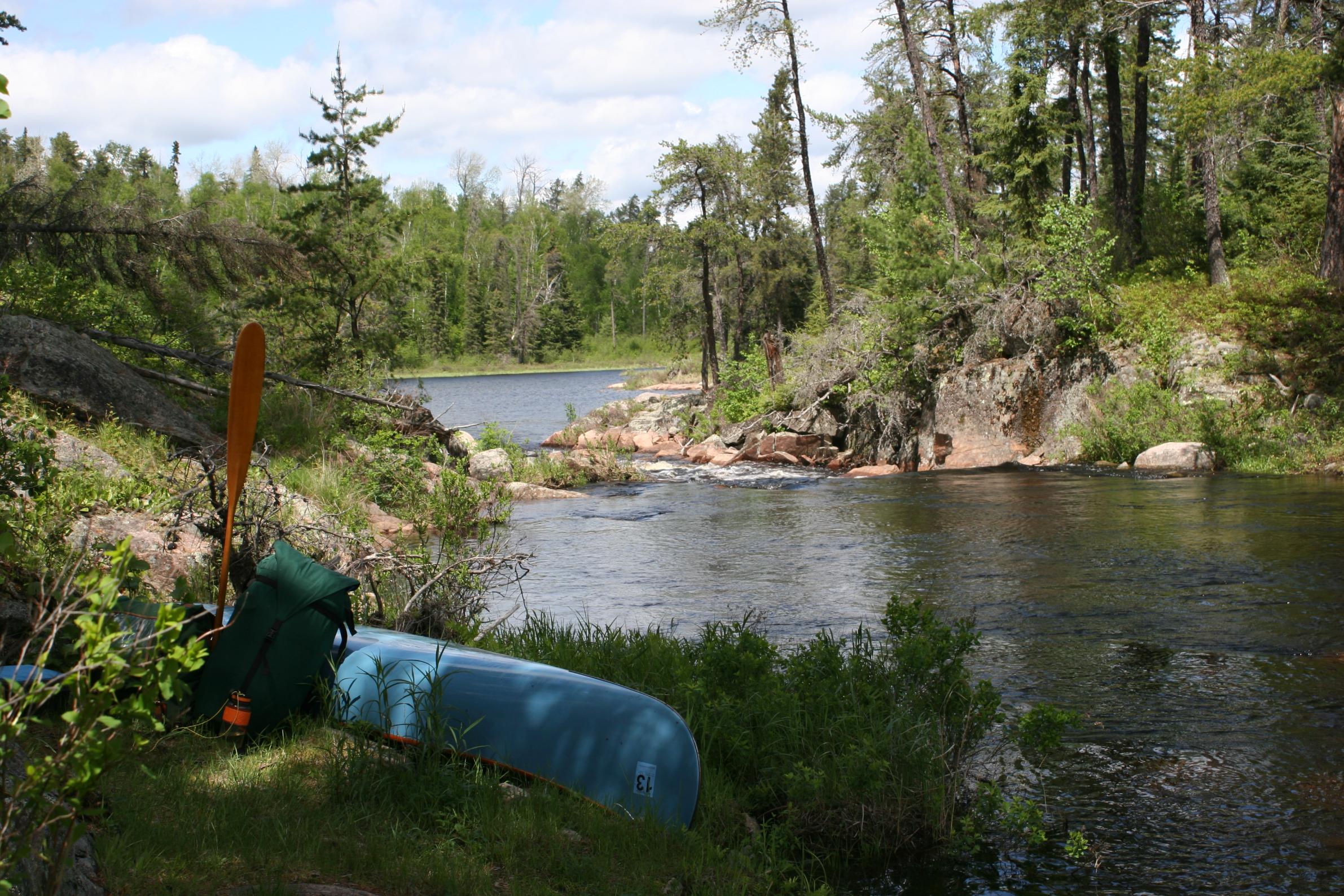 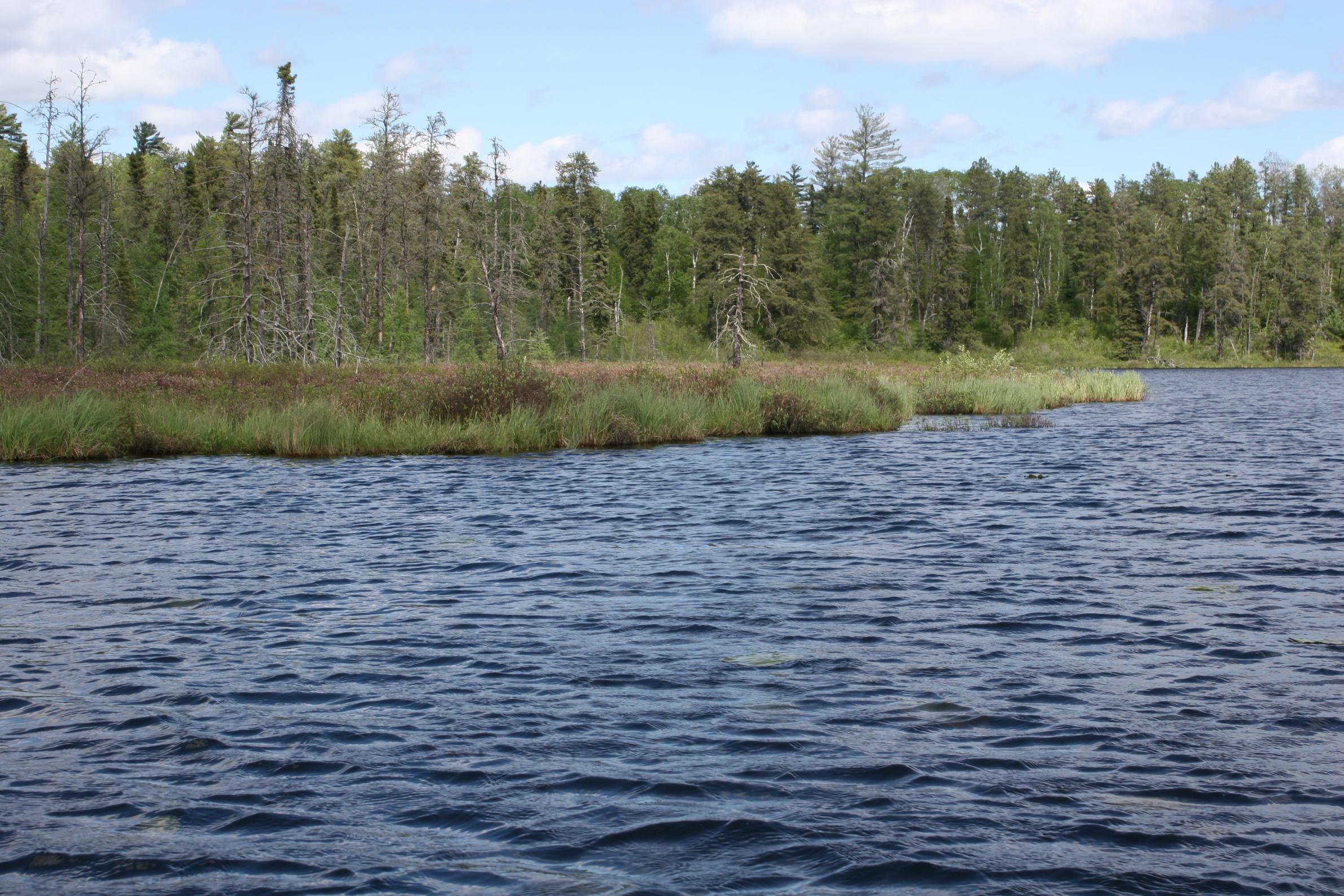 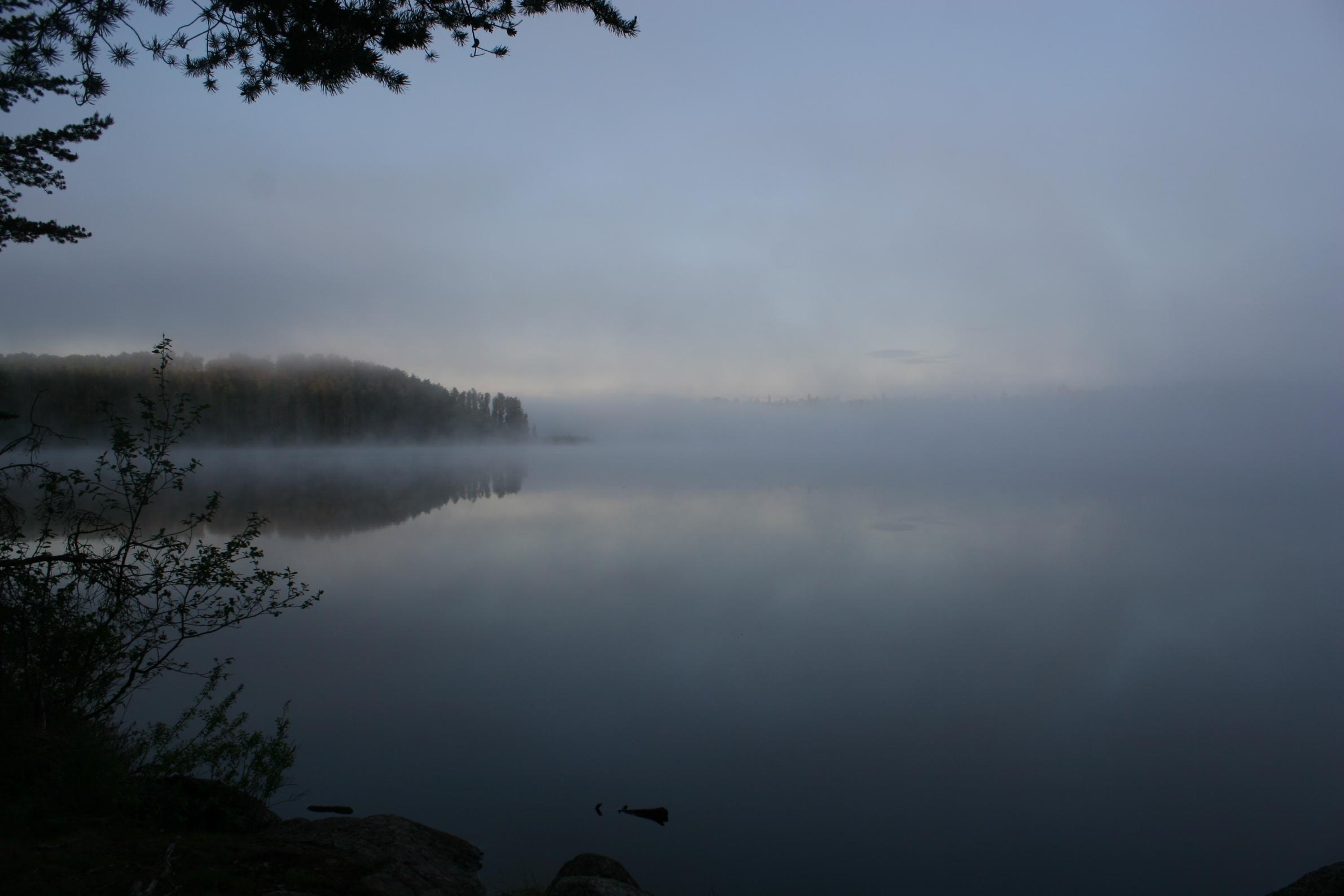 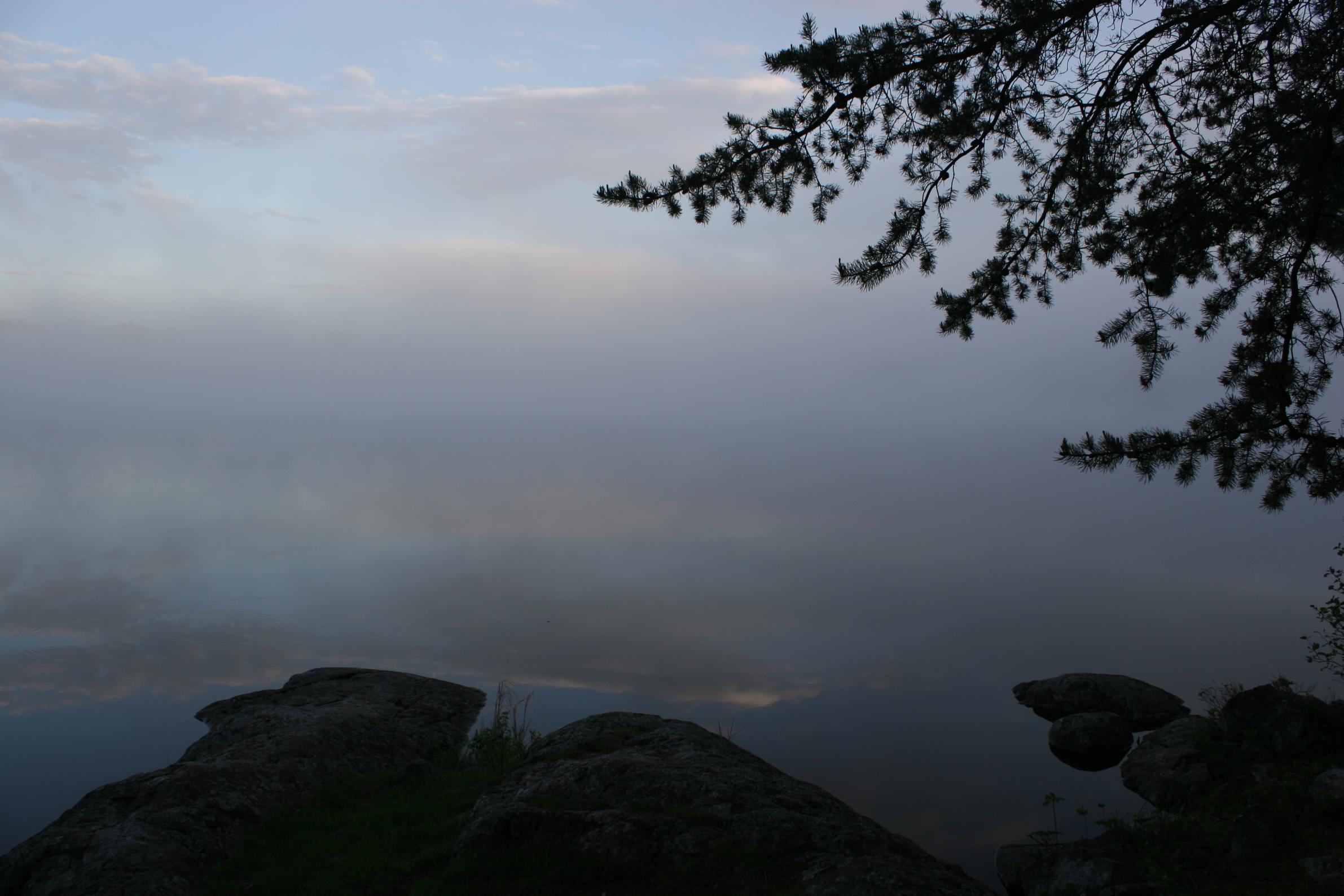 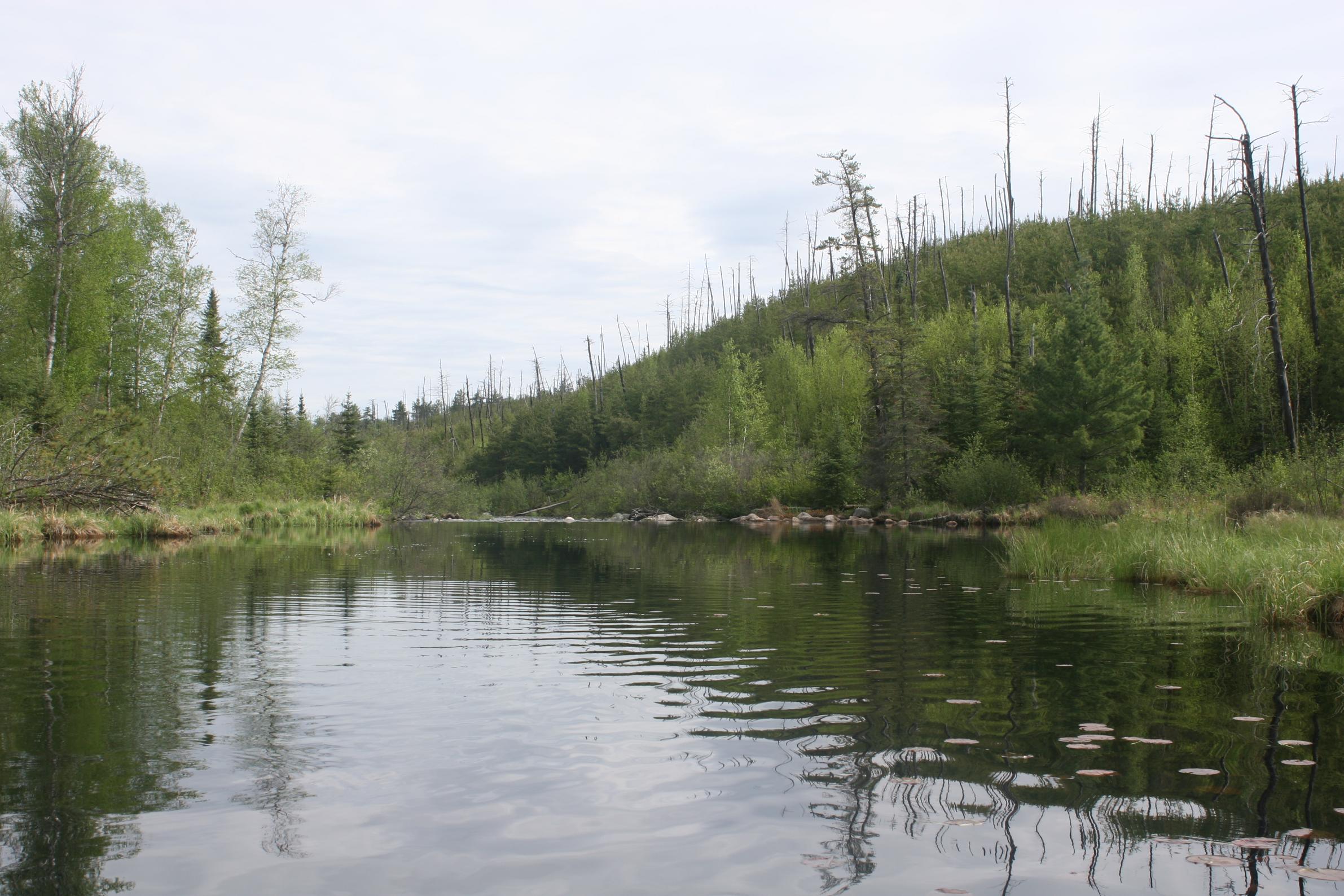 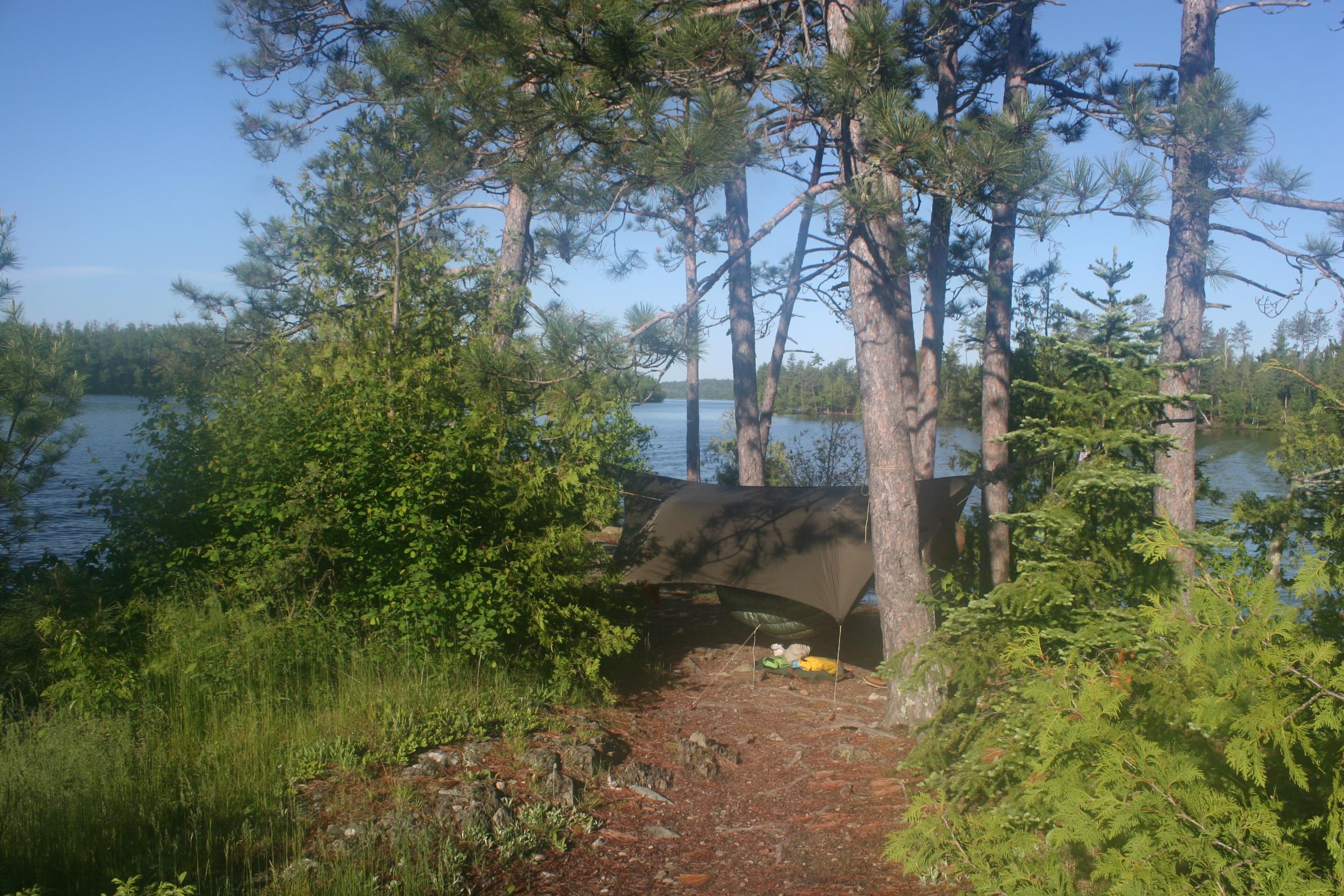 Part II, Quetico Trip
>
Drove up the GF Trail June 11 to Seagull Lake where we spent the night at Wilderness Canoe Base. Great place. If you haven't been by, visit. If you have a son or daughter you'd like to get into canoeing it's a great place to send them.

Day 1 paddled to Cache Bay Ranger Station and then camped on Cache Bay before entrance into narrows leading to Silver Falls. A lot of wind on Sag day 1. Had to pull off the water for a bit on the lee side of an island to wait for the water to calm a bit. The wind abated slightly, so we went on. First site was really very nice for what it probably a well used site. Rained during the night, but not significantly.

The last thing I should mention about the trip is the maps we used. For my BW solo I used the Nat Geo maps. Only two maps for the entire BW. The only difficulty I had with them was on the border. There is a needlessly dark and heavy line marking the border that obscures detail. Otherwise they were great.  for the Quetico trip we used the Chrismar map ("The Adventure Map", available online and at the Ranger Station). Again, it was great not to have to shuffle 12 or 13 maps. The portages are accurately portrayed. Since we went about 170 without mishap I would say the detail is fine. I'll try and post pics later this eve.