Trip Type: Paddling Canoe
Entry Date: 07/09/2012
Entry & Exit Point: Quetico
Number of Days: 13
Group Size: 2
Trip Introduction:
I've been paddling Quetico as a guide and recreational paddler since I was a teen in 1979. In recent years I have been paddling here with my oldest son, now 15, who shares my love of canoe tripping. This year's route was partly determined by Everett's curiosity to see Poohbah Lake, and my desire to fill in a few route segments I have not yet seen. Here is a sampling of our route: Moose Chain, Basswood, Sunday, Agnes, Bird, Kawnipi, Montgomery, Alice, Chatterton, McDougall, Camel, Sturgeon, Poohbah, Conmee, Suzanette, Burt, McIntyre, Sarah, "Irene", Kahshapiwi, McNiece, Yum Yum, Shade, Burke.
Discuss Trip: View Discussion Thread (6 messages)
Part 1 of 2
9 July, Day 1: Everett, our dog Wilson, and I headed for Quetico, leaving home around 7:30a and arriving at the public landing on Moose Lake, east of Ely, around 10:00a--a much longer drive than usual due to a major detour along Hwy 1. I noticed the rear wheel going flat when I parked the car, but decided to fix it when we got back from the canoe trip. In short order, we had both packs, rod case, Wilson, and ourselves in the canoe and were paddling up the Moose Chain toward Prairie Portage, arriving there an hour and 50 minutes later--just in time to see the ranger station close for an hour for their lunch break. So, we ate lunch and hung out until they opened again at 1:00p.
After picking up our permit we headed out across Inlet and Bayley Bays of Basswood Lake under mostly sunny skies and light winds. Before long we were at the North Portage to Sunday Lake, arriving with another group just ahead of us. We were packed for single portaging, with me carrying canoe, pack, and rod-case, and Everett carrying a somewhat heavier pack and our paddles. We passed the other group at the Sunday end of the 640 meter-long portage, and then headed across the tea-colored water of Sunday Lake toward the Meadows Portages a few miles to the NE.
We portaged 970m on a boulder-strewn trail with a couple of moderate hills, and arrived at the clear waters of Meadows Lake, where we could see some small, largemouth bass swimming in the shallows. A short time later, we were portaging again on the rocky, 560m trail to Agnes Lake. Gotta watch the footing there—especially carrying a heavy load!
After a short paddle we arrived at Louisa Falls, tied up the canoe along the lakeshore, and then soaked and washed off the sweat and grime of portaging in the “Bathtub”, an eight-foot-deep pool mid-way down the falls. Wilson was a bit skittish around the falls due to the noise, and was glad when we hit the paddles again.
By early evening we were camped in Agnes Narrows on a small point sticking out from a long, southward extending point, with a massive pine-covered ridge of granite forming its spine. Certainly, travelers have used this site for many centuries.
I set up the tent and cooked supper, while Everett collected blueberries and checked out the great view from the ridge behind camp. It was then that I noticed I had forgotten to bring my fire grate—a bit of an inconvenience when you usually cook on a wood fire, as we do. Around sunset after bear-proofing our food, we retired to the tent for the night as the mosquitoes were emerging from their daytime hideouts. The evening was very warm, and the forecast dry, so we kept the fly off the tent.[paragraph break]

July 10, Day 2: I was awakened before dawn by a quick growl from Wilson and the sound of paddles on the water, as a group of paddlers in two or three canoes was heading north past our camp. Talk about early risers! When the sun rose we got up, built a fire to heat water for coffee and oatmeal, and broke camp. I rigged up our fishing rods and set up the depth-finder for the paddle up Agnes, as we had no portages planned for the day.

15 July, Day 7: Having paddled all the way to Poohbah our plan was to stay an extra day to fish and explore. The morning was clear, with the faint smell of distant forest fires in the air. We smelled this on several other days during this trip.

After breakfast we loaded the dog, camera, depthfinder, and fishing gear into the canoe and headed out to explore. The lake was deep all the way our island and its associated reefs, with depths quickly dropping to 165 feet off one side. We headed to a set of nearby islands and fished a couple of reefs without success—probably because they were a bit too shallow to fish during bright sunshine—and then found a deeper reef where we caught and released numerous 18 to 22-inch walleyes. Lots of fun.
Back in camp we ate lunch and hung out a bit before exploring in another direction. We found a fantastic reef emerging from deep water (up to 224 feet) where the big smallmouth and good-sized walleyes were really stacked up. The high overcast that moved in probably helped the fishing too. Everett caught smallmouth bass up to four pounds, and we both caught numerous walleyes in the 20 to 22-inch range on everything from the 2-oz white buck-tail jigs I usually use for trout to 3/8 oz jig/twister-tail combos. We kept one walleye to eat with supper.
I’ve never had much interest in walleye fishing, because most walleyes are just too small to be exciting to catch, unlike the lake trout I spend at least 90 percent of my fishing time pursuing. These walleyes were exciting, though, as they ripped out the drag and fought to stay on the bottom. These were real predators. No doubt, many BWCA lakes once had fisheries like this, but have since maintained fish sizes and numbers well below their potential due to excessive harvest.
The evening was calm, overcast, quiet, and a bit surreal. There was once an Indian village on Poohbah, as there was on Kawnipi. I don’t know where it was located, but this was the home of many people over many generations, and the bones of those people must lie on many points and islands. What stories could this place tell? Not being prone to superstition, I still find myself with the nagging feeling that to tread here demands respect and humility. I comply.
Wilson was being bugged by ankle-biters, and not being able to nap much during the day as all dogs do, I put him in the tent, where he gladly fell asleep. I went into the lake for an evening dip, as the evening was again warm, and Everett fished for a while until the fading light and waxing mosquitoes forced us into the tent. 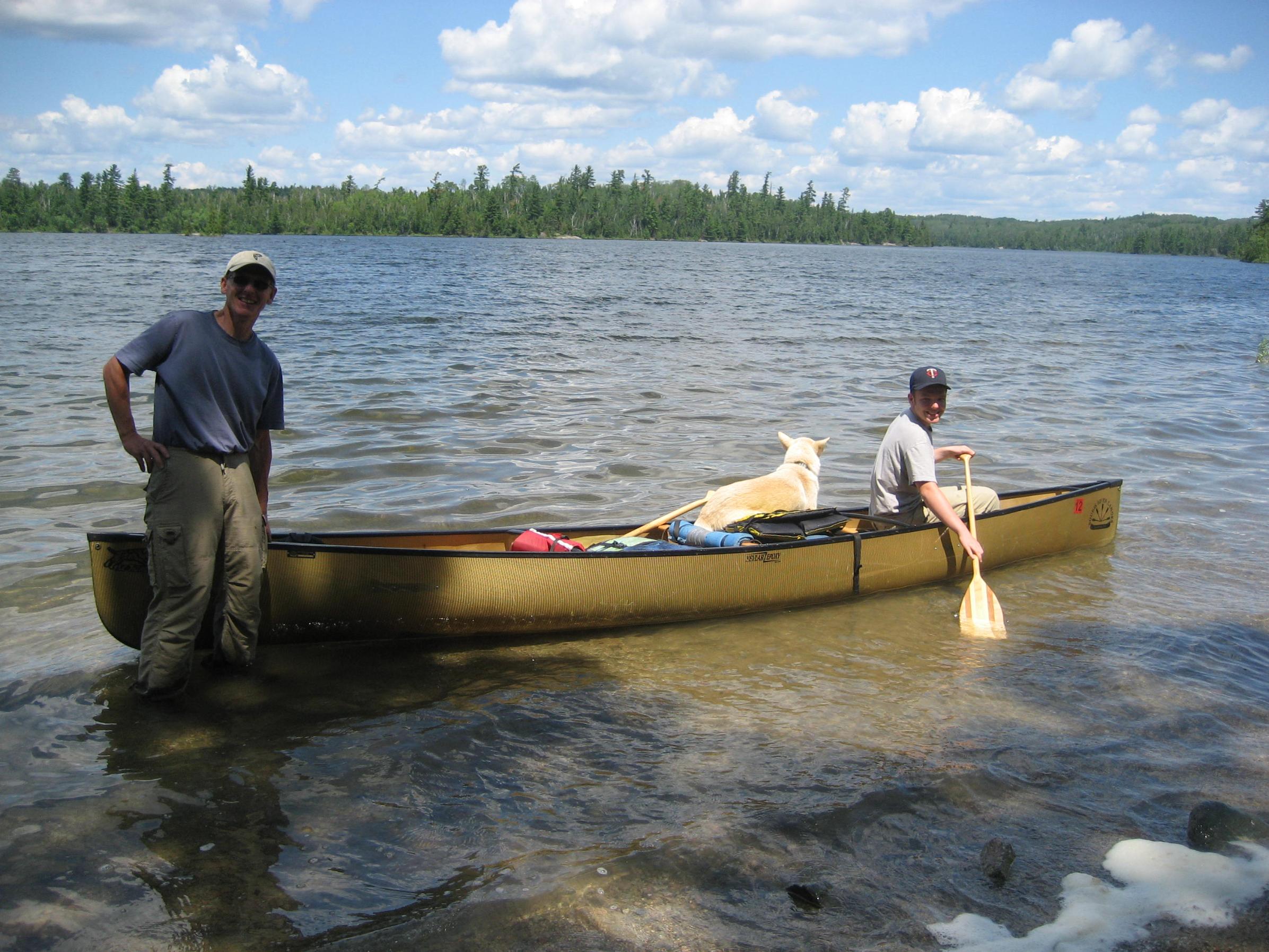 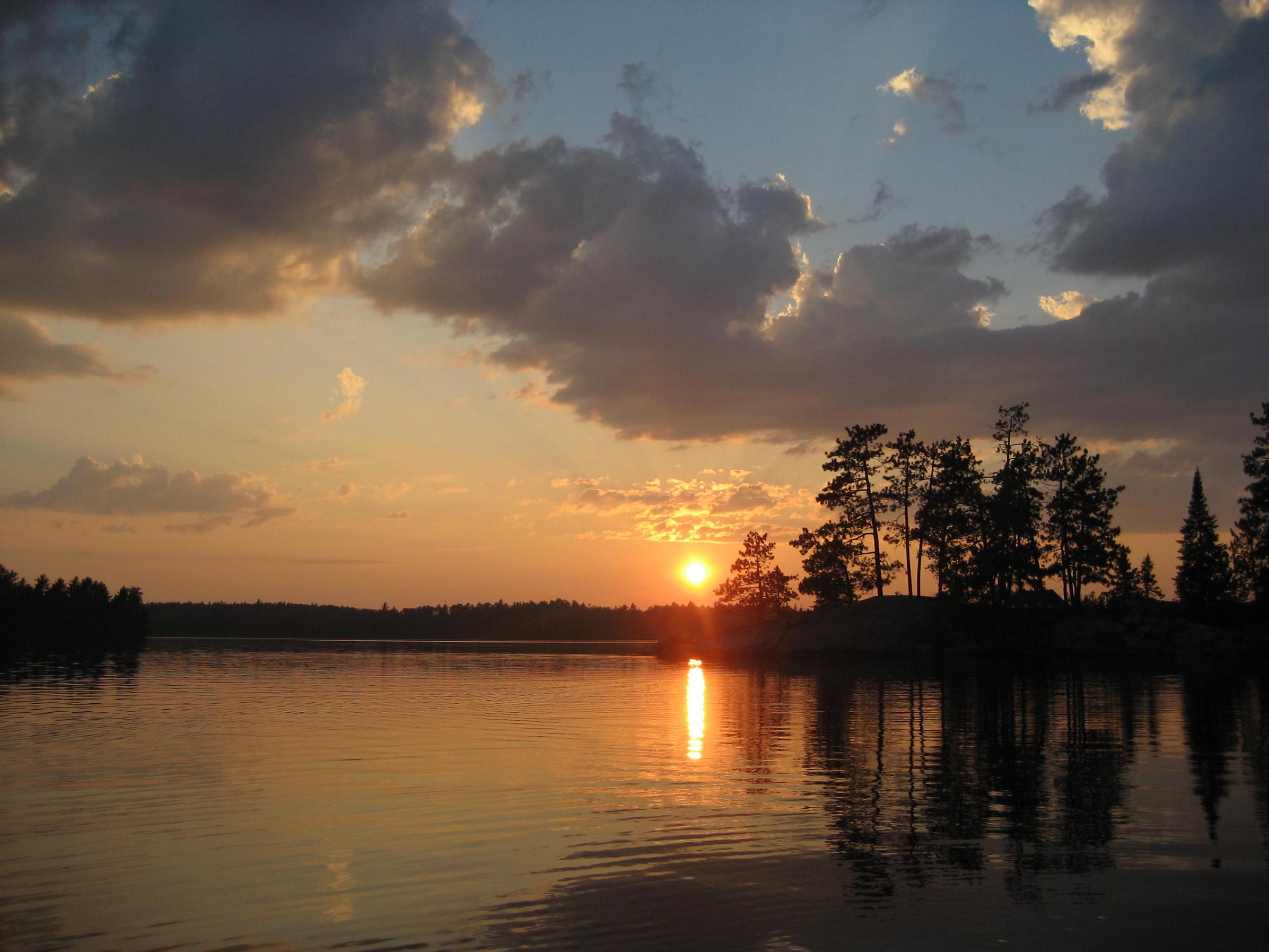 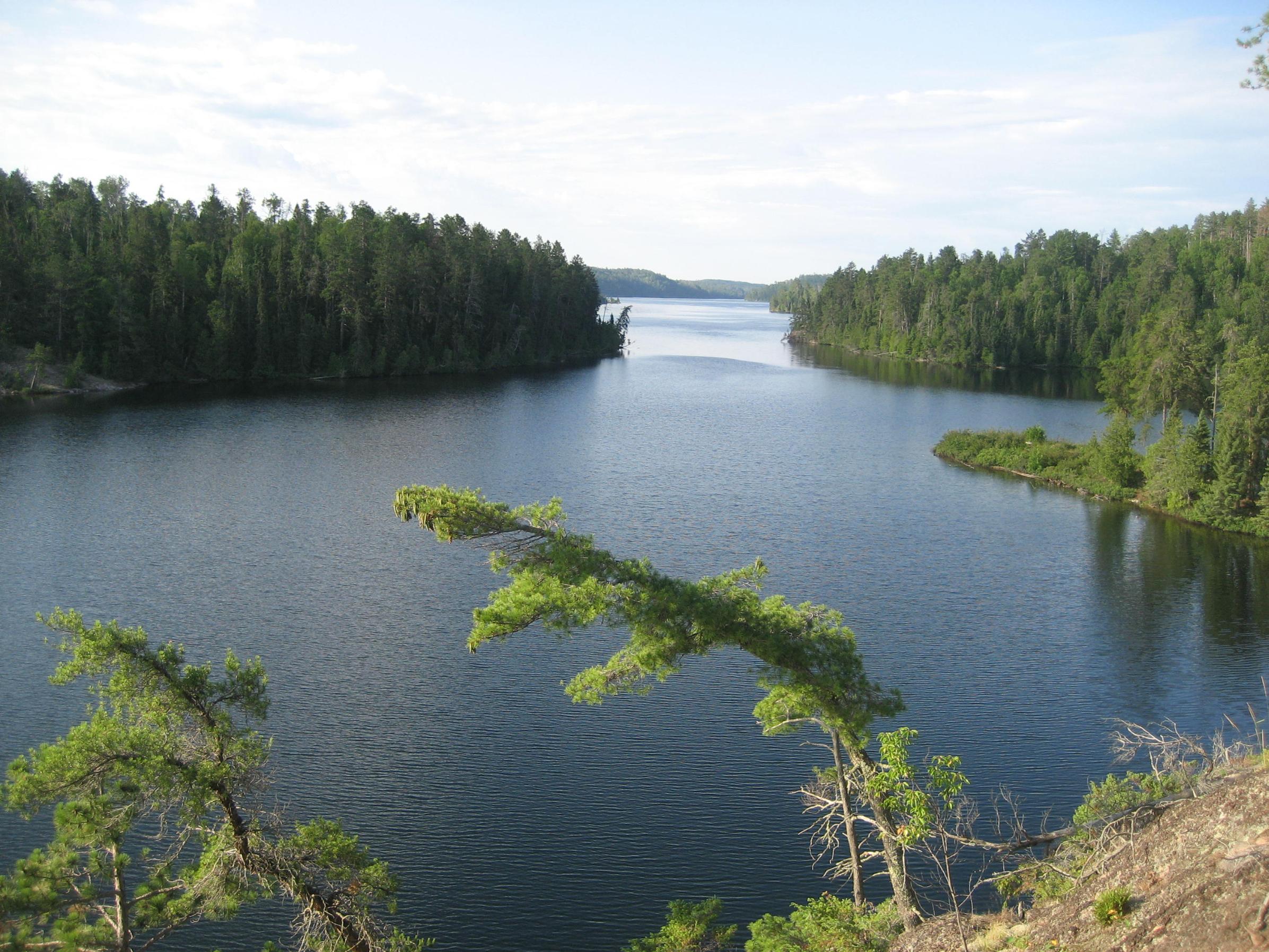 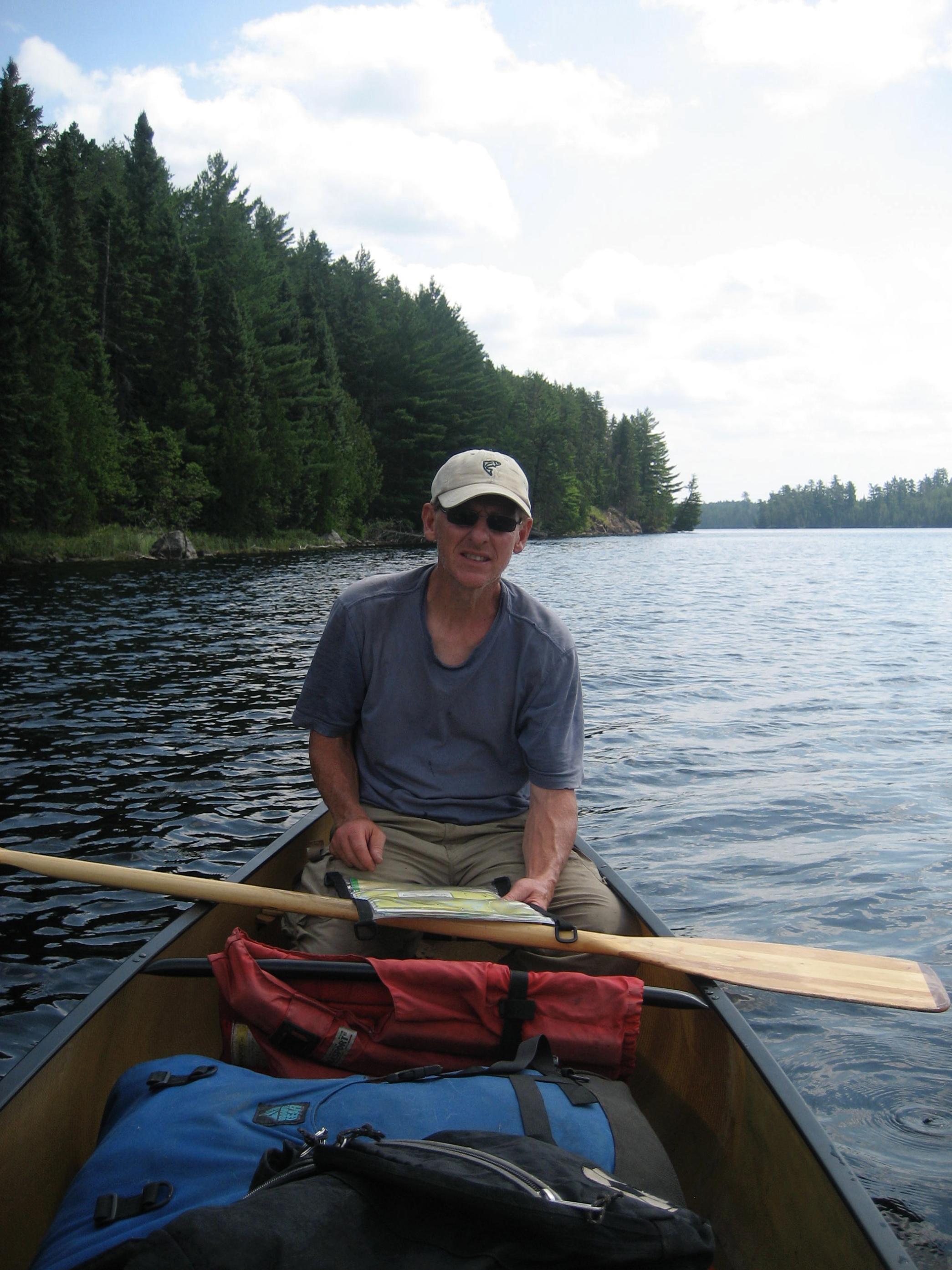 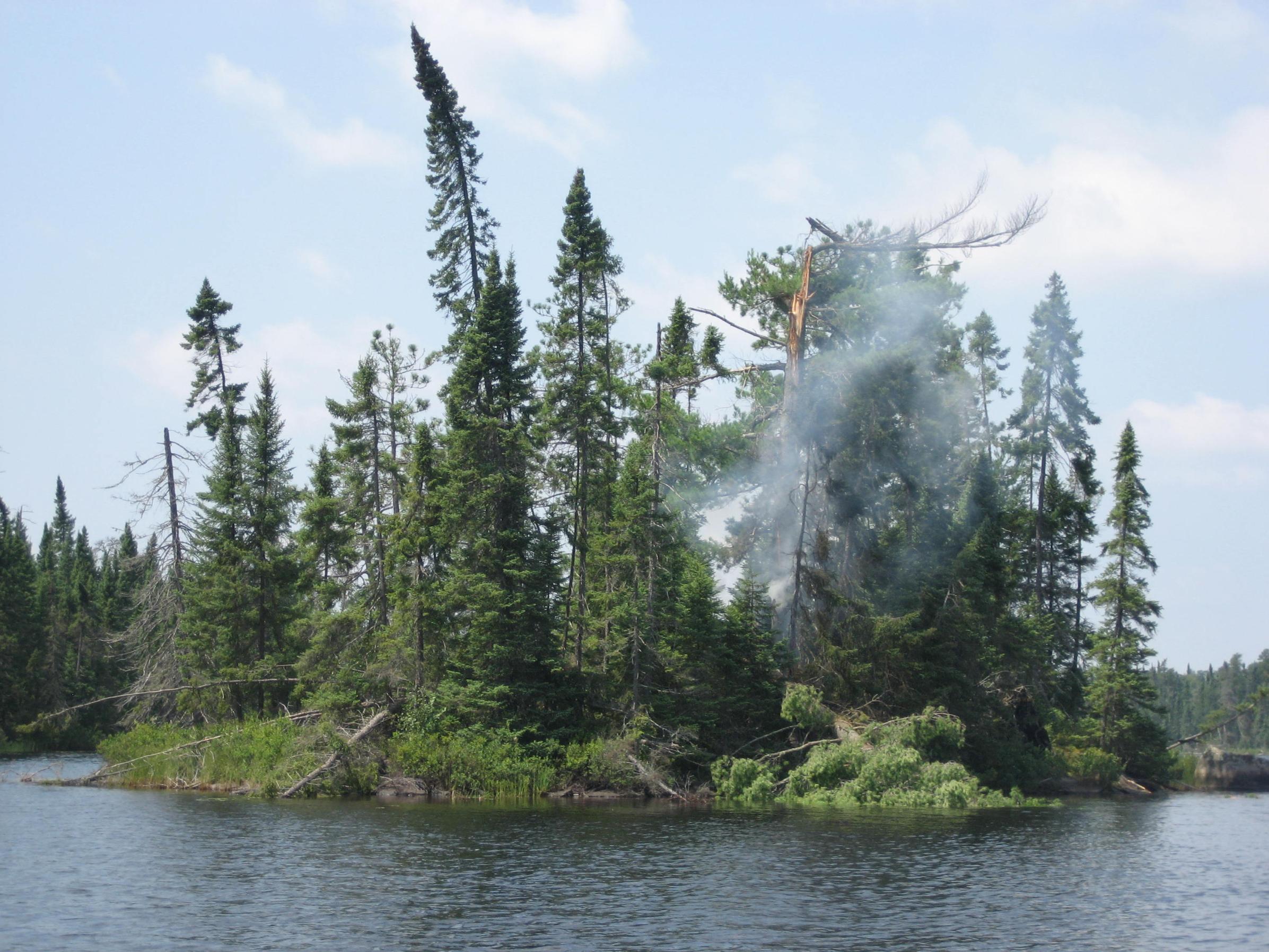 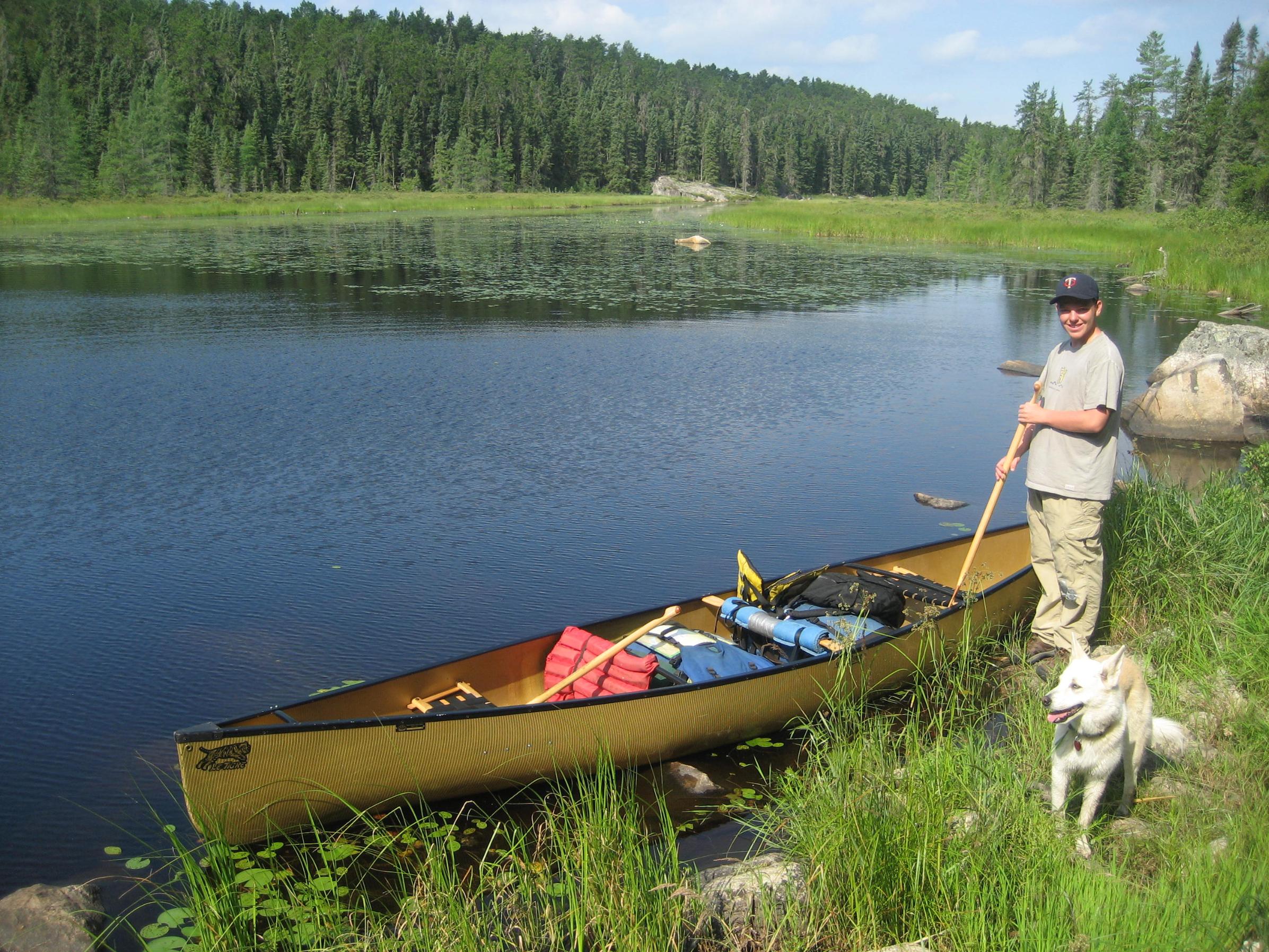