Trip Type: Hiking
Entry Date: 08/04/2012
Entry & Exit Point: Angleworm Lake (EP 20)
Number of Days: 3
Group Size: 2
Trip Introduction:
They say a trip doesn't become an adventure until something goes wrong. I guess our adventure started from the beginning.
Discuss Trip: View Discussion Thread (8 messages)
Day 1 of 3
Saturday, August 04, 2012 This trip was to be my wife's first trip to the BWCA along with our dogs Newman (brown) and LeeRoy (white). The night before (Friday Aug 3rd) we drove 1/2 way up from Iowa to stay with my grandparents in Bayport Mn. Normally a 4.5 hour drive was turned into 7 on account of all the road construction and weekend traffic. We made it in just before 9 and had a quick bite while letting the dogs stretch their legs before heading to bed around 10:30. It wasn't much past midnight when we woke to tornado sirens and wild storm raging and moments later the power cut out. After an hour of rain and wind the weather settled and we were just dozing back off when the sirens start up again, this time its the police pulling over a drunk drive right in front of the house! Naturally our dogs bark at every little noise so the voices and car doors shutting kept everyone awake for another hour and after it all finally quieted the tow truck 15 minutes later got us all back up. At this point it was pushing 3am and we'd been more or less awake all night. We were still without power but we decided to just shower and get on the road, it was another 4.5 hours to Ely and if we stopped for breakfast we'd be pulling into the rangers station shortly after they opened. I loaded up on caffeine and off we went, I think everyone caught a few hours of shut-eye on the road, except for me of course. We reached the rangers station around 9 and were to our EP by 9:30, it would have been a great early start except, it was raining.....misting really when we were gearing up but by the time the hike started it was starting to spit. 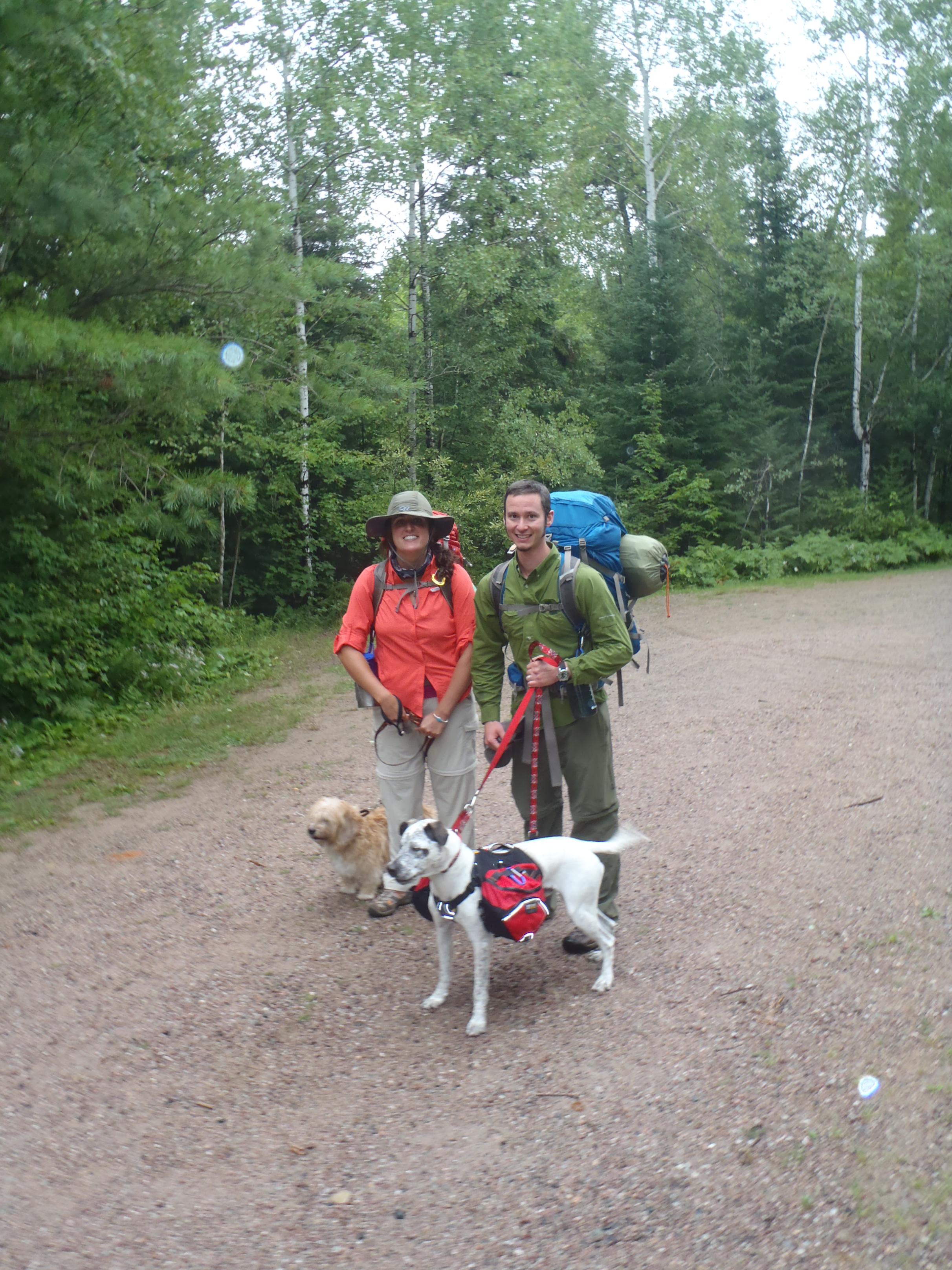 As you can see; we packed A LOT! I've learned my lesson over time that 25lbs is plenty to get you thorough a week but this trip we wanted to eat well and relax, sleep comfortably, and have a fire all day. With the last minute addition of a 3L bladder of wine my pack had eclipsed the 50lb mark and my wife's was just under 40. LeeRoy's was 9, he was carrying all the dogs food/gear. Sadly that first picture (taken my a canoe group about to head in as well) was one of our last until we reached our camp that day. Even though it's an all weather camera, when the rain started really coming down and we reached the end of the portage and started the trail (we went counter clockwise) our focus was completely on how not to injure our self and to just keep moving. The first obstacle was the boardwalk (we took some pictures on the way out). It was wet, slick, and LeeRoy not being the brightest walked right off the edge into ~2 feet of water/mud. I had to lay on my stomach with my pack on and lift him out (good thing his pack has a handle!). Once the portage ends and the trail begins the quality of the trail makes a sudden decline. I guess I expected the trails to be similar to the portages, boy was I wrong. It looked much like a animal trail with 12 foot tall boulders and numerous fallen trees to challenge you. The dogs did amazingly well and the biggest concern was falling in the mud or on the slick rock faces we had to cross. As careful as we were we both had our spills. The only damage sustained was a hole rubbed into my wife's pack when she had to slide ~30 feet down a slick rock face. The site we were pushing for was #1896 according to the map on this site, back in a little bay. Knowing there was a canoe group behind us we were nervous that our 1mph pace wouldn't get us there in time to grab it, or that we'd arrive and it would already have campers leaving us another mile to push through the wet brush to the Whiskey Jack Lake site. I'd read about old logging equipment being scattered around the site and was hoping to check it out. Luckily we arrived to a vacant site 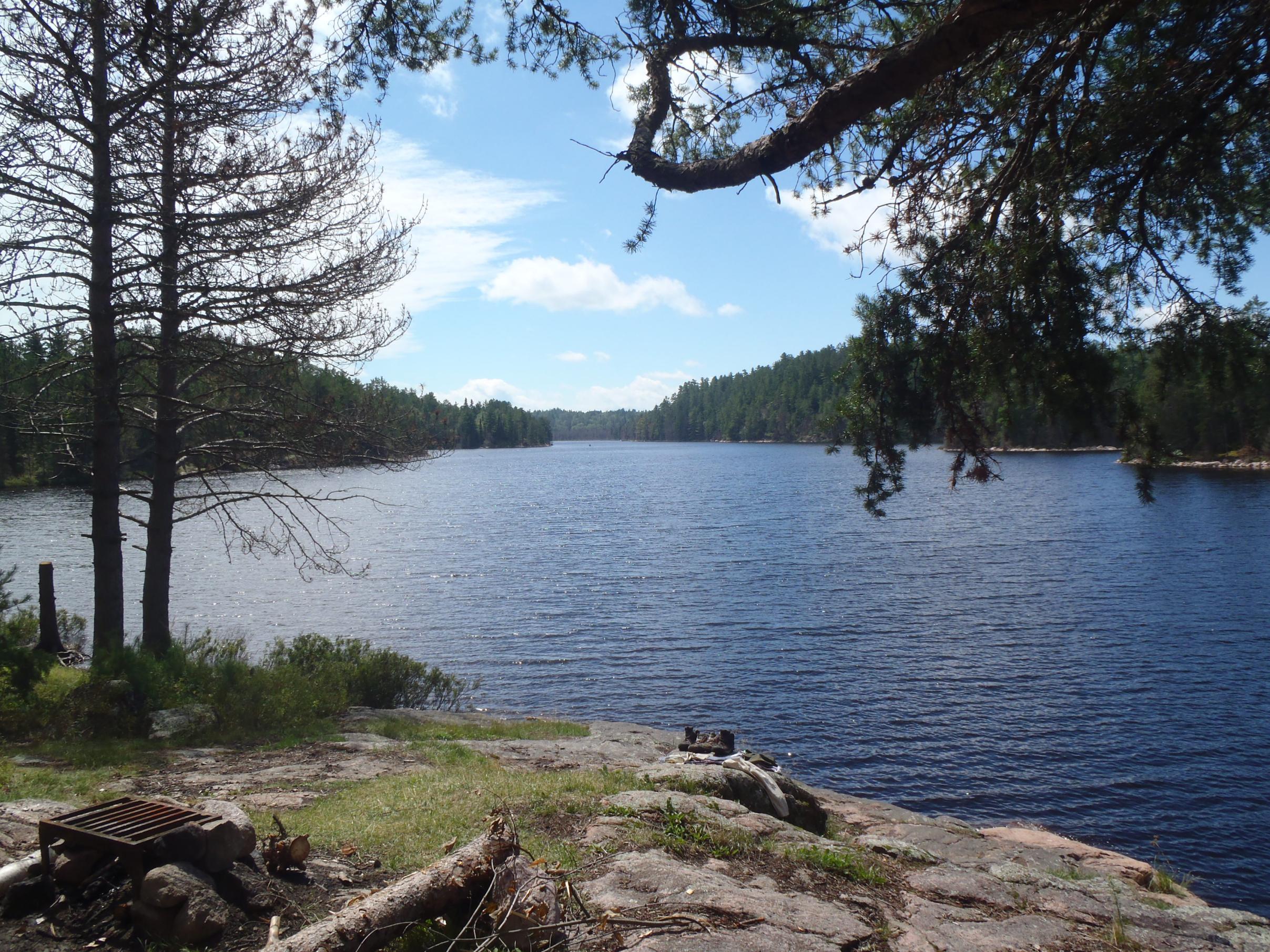 The rain was light when we arrived and stopped within a half an hour so we laid our things out to dry and set up camp. My wife and the dogs sun bathed and slept for a few hours while I cut and split wood and did a bit of fishing (one smallie so small it doesn't even count as a catch). 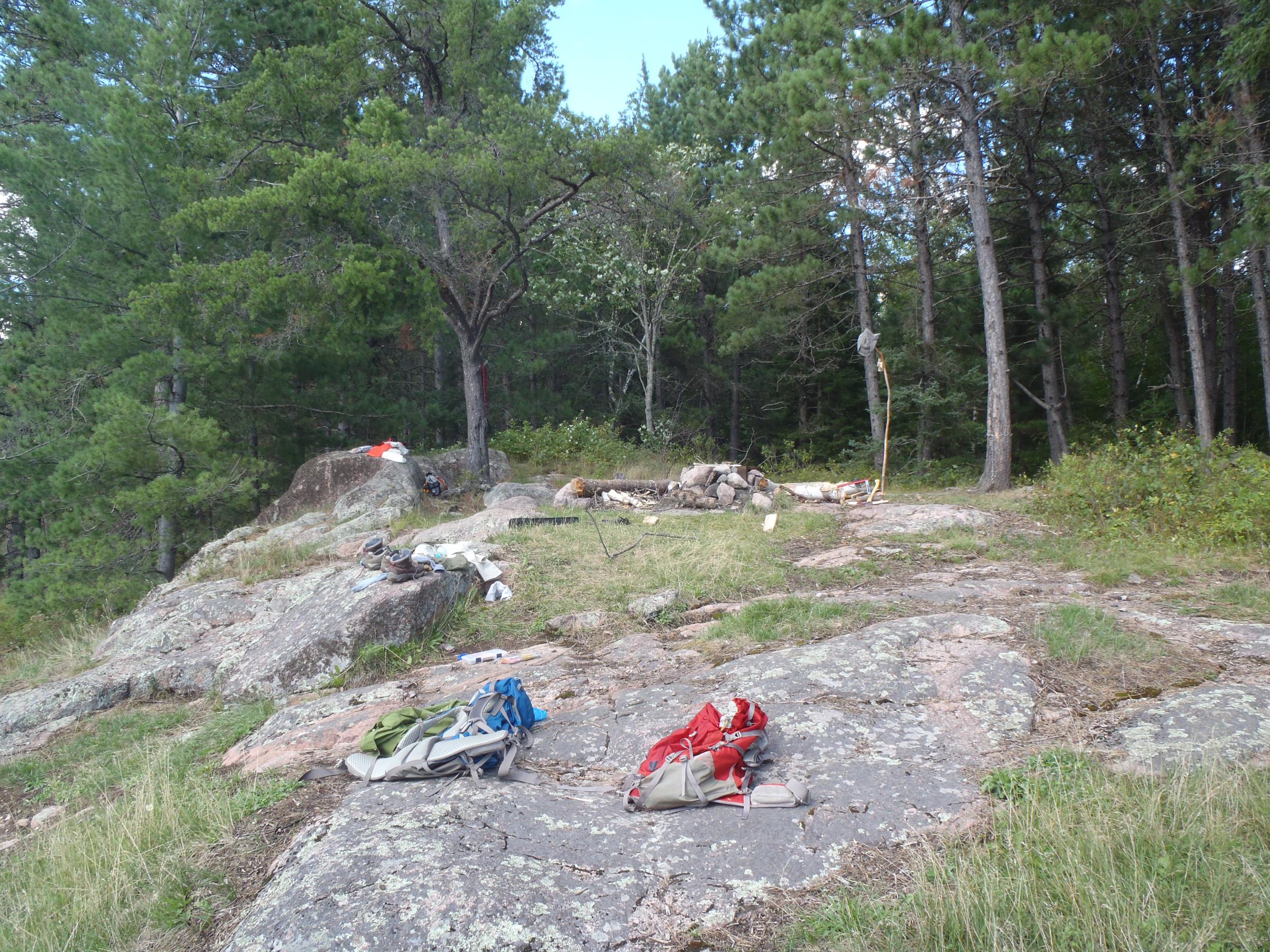 We grilled steaks for dinner and made some potato's to go along with it and started in on the bladder of wine! The site was the biggest and maybe the best of the trip, 2 canoe groups canoed in our direction (likely one was the group we saw at the EP) and had to turn away when they realized the spot was taken. If you make it on to this lake and this spot is open; grab it!