Lady Chain with my lady, August 2012
by caribouluvr

Trip Type: Paddling Canoe
Entry Date: 08/10/2012
Entry Point: Kawishiwi Lake (EP 37)
Exit Point: Sawbill Lake (EP 38)
Number of Days: 4
Group Size: 2
Discuss Trip: View Discussion Thread (6 messages)
Day 1 of 4
Friday, August 10, 2012 We woke up at Baker Lake campground with the first light and a chilly, foggy lake to quickly pack up our stuff and head over to Sawbill to get the Bell Seliga we rented and hop the shuttle to Kawishiwi Lake. Because this was my wife’s first real “route” trip where she was moving each day, I wanted to try a Kevlar canoe to help lighten the load instead of taking our heavy fiberglass canoe that we use for less ambitious day trips or when I go out with a male companion.
We made it to Kawishiwi in great time after having a nice conversation with Luke, our driver from Sawbill. It sounds like such a fun and rewarding place to work for the summer! We paddled across Kawishiwi and up to Square, into the edge of the Pagami burn area that we had touched a couple of weeks earlier when we camped at Kawishiwi campground with our kids. It didn’t take long for us to adjust our expectations on the portages because our #4 Granite Gear pack was way too heavy for my wife to carry, and almost broke my back as well. I also had the canoe loaded down with under seat bags full of fishing and canoe gear, so it might as well have been an Alumacraft. I was definitely the only option for hauling the canoe. We then spent the next couple of hours paddling and portaging in a very strange black and green world, somewhat beautiful with the freshly exposed rock and newly growing flowers on the forest floor. My wife was quite nervous about damaging the Kevlar canoe in the rocky waterways we were encountering, but we were figuring it out as we went and the sunshine into the lake was making it easy to see the dangers.
We arrived at Polly to a refreshingly green forest again, minus some brown trees right on the south shore, and began the quest for a campsite. It soon became obvious that, even though we were arriving around lunch time and were making good time, it was going to be very hard to find a site. We had observed about 10 of the 15 campsites as unavailable when we rounded a corner and had an older fellow paddle up and ask if we needed a site. He was moving his camp to the next island to have a change of scenery (he was in the wilderness on a 14 day stretch!) and offered it up to us as he finished packing up. We were so lucky to get this beautiful campsite and it was fun to hear him talk about some of his adventures and how he had been coming to the BWCA for the last 33 years from the state of Virginia because it was the best fishing in North America he had found! Later that afternoon we had multiple parties paddle through the narrow channel in front of our island looking for a campsite, dejected that ours was taken.
We had a great afternoon trying out our new hammock in the sun and just enjoying the rest after the long morning. We tried a “wilderness margarita” using Propel lemonade packets and tequila – surprisingly great after a long morning. My wife especially loved the campshower we took using our sea to summit pocket shower. She also loved chasing the overzealous squirrels away from our food while we were eating and narrating what they must be saying to each other about it. We decided to try fishing for a little bit in hopes of catching some dinner. We paddled out into a bay near our campsite to troll with Rapalas in about 5-10 feet of water, and within a few minutes I landed a 16” walleye and dinner was served. This was good because my wife had been strongly indicating that she wanted to keep the fishing time limited on this trip so that we had time to relax in camp. I still have yet to catch a walleye with a leech in my life (always with Rapalas – go figure), and that didn’t change during this trip due to a future unfortunate event. We cleaned the fish well away from our campsite because of the Polly Lake bears (Luke warned us on the way over), but fortunately we had no bear visits during our stay. We’re blue barrel people and I’m convinced it’s better because of the way it seals in all smells. Plus, I’ve never hung a pack in my life and have no clue how – when I go backpacking I use a bear vault canister. We made a small campfire as the sun set, but my wife was fading fast after our early and tough morning, so we went to bed so we could get an early start on what would be a longer travel day to Phoebe Lake, especially since we were scared straight about finding a campsite in good time after the Polly crowd. 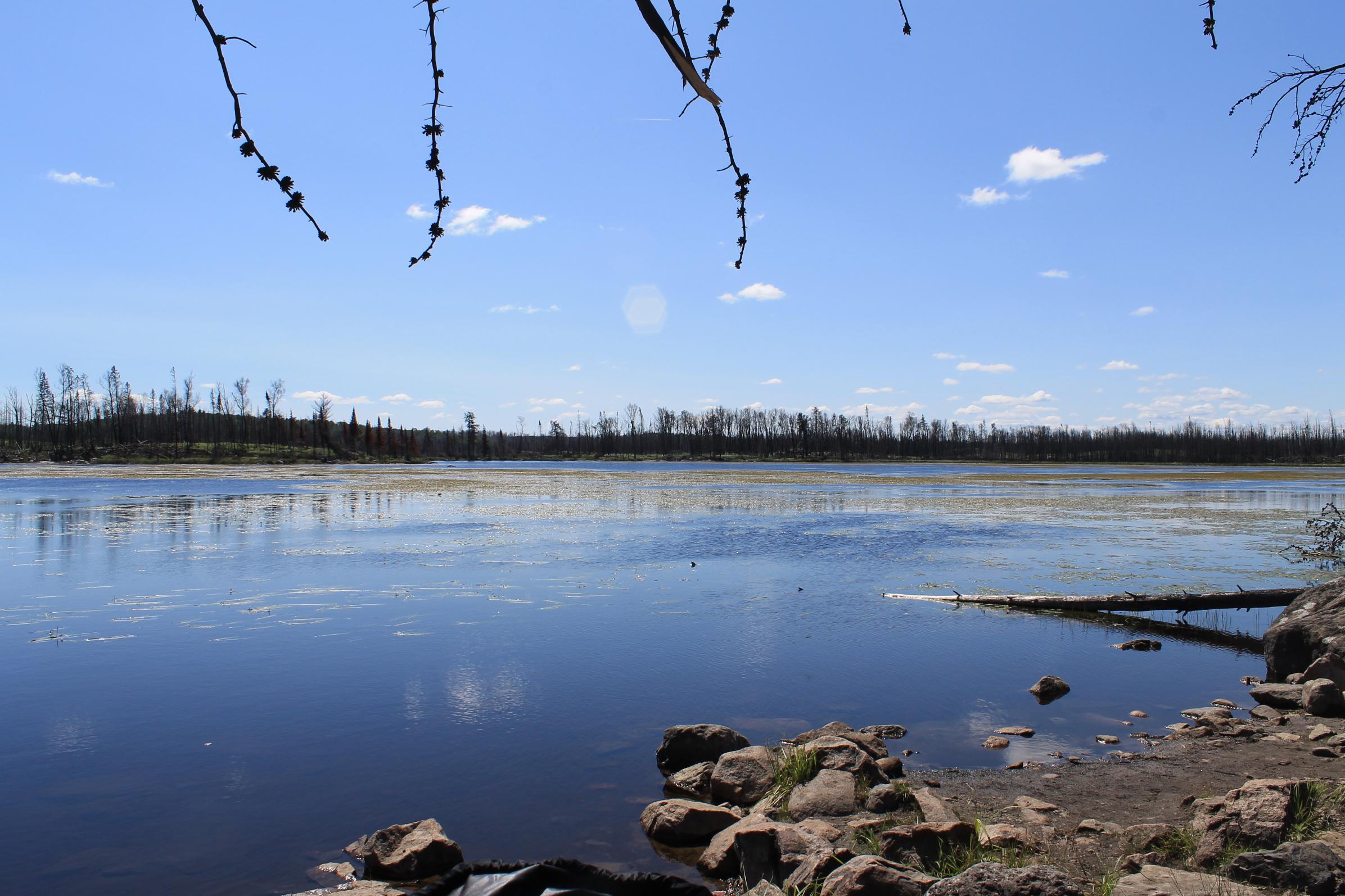 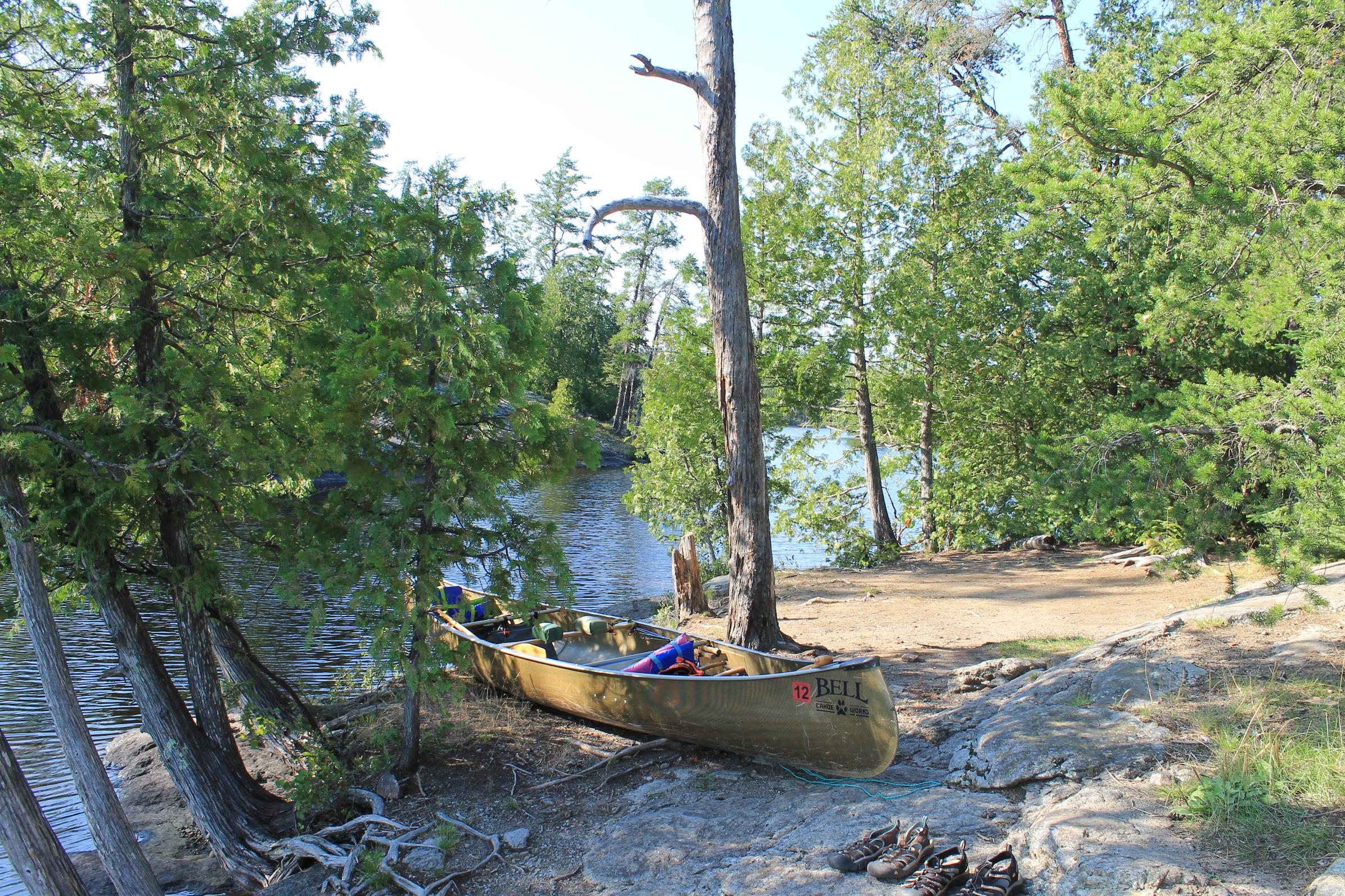 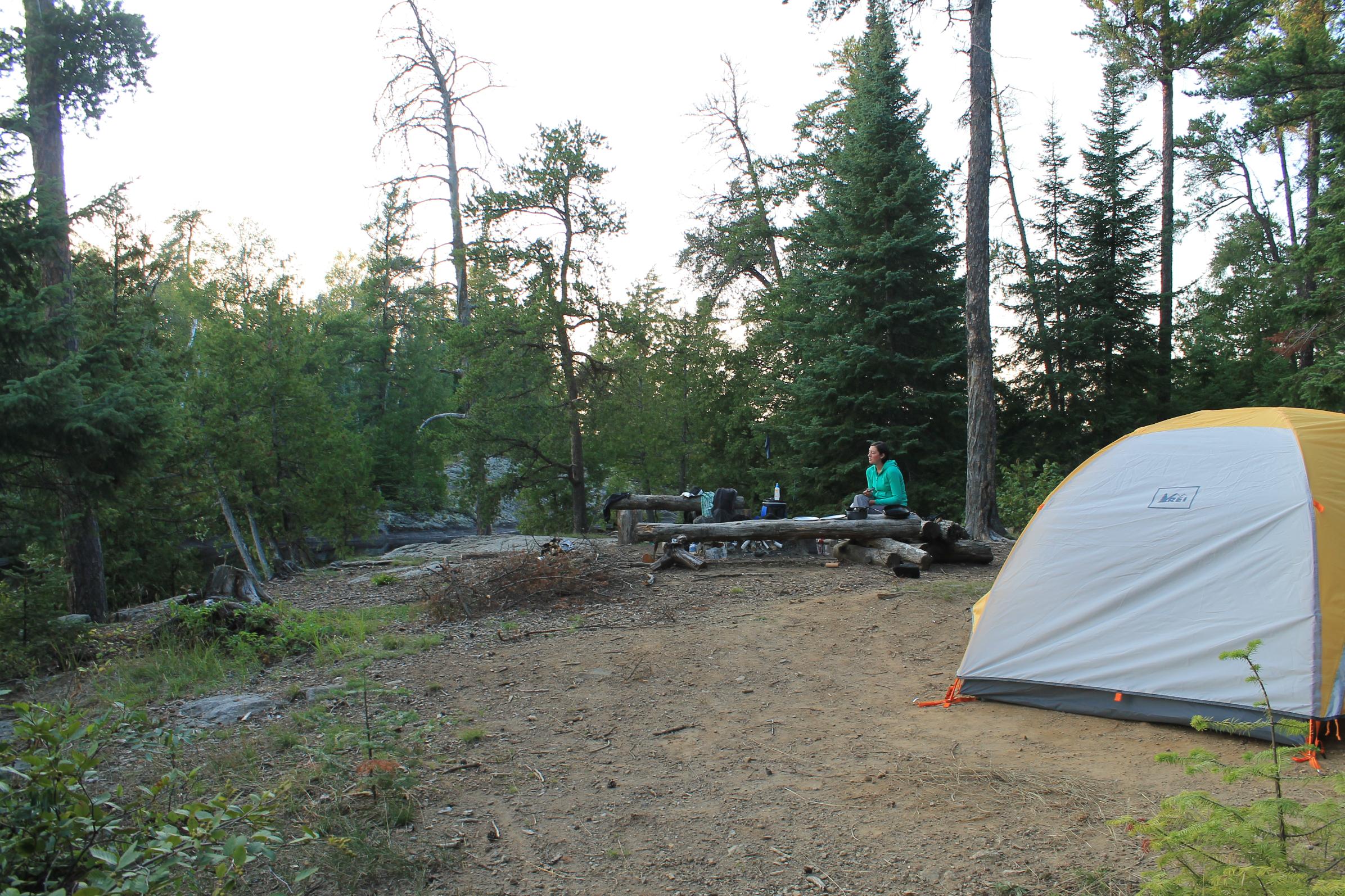