First Trip For My Wife
by SWB

We left late on Wednesday Night after making our last store run for some the stakes, around 11PM. Her parents watched our children for the time we were gone. She dozed off and on until we arrived at the Tofte Ranger Station around 4AM. There was rain off and on all night. I climbed into the back seat and dozed until 6AM when they open.

Day1 – After getting out the hot coffee we went inside and got our permit. Couldn't believe it but the video was already running and another group was watching when we walked in.

The drive down the Sawbill Trail was fun. We were greeted by a small moose on our way in and had to stop and remove a tree that had fell across the road. Once at the landing (Kawishiwi Lake EP#37) we prepared and left. There was a cold North wind with intermittent rain all day. Aimee was a real trooper and didn't say anything and we worked are way across the lake. Reading the map I missed the entry to the river that headed up to Square lake, not by much and made the quick correction. Once in the river the wind calmed down and it was pleasant paddling. The portage into the river headed to Kawasachong went very well. We stopped at the other end for some bagel and cream cheese.

After arriving on Kawasachong we scooped out the campsites. One was already taken and the other campsite on the E. side of lake didn't appeal to us because of the wind. So we took site on the NW. side of the lake. It felt good to arrive after driving through the night and paddling in the rain. We sat up camp (had to clean up glass & cans out of the fire pit) did the chores and took a nap.

It was great to be there. After collecting firewood we spent time just talking and getting ready for supper. Stake & potatoes – It was a great first day.

Day2 – This day spent reading and relaxing. I took off and did some exploring on the lake and the bay right behind our campsite. There was a lot of beaver activity. The night before we saw a beaver swim right by us and the next morning he was headed somewhere else. Each day/night we saw him swimming.

Day 3 – Another day of relaxing. Both this morning and yesterday we slept in, drank coffee and spent time together enjoying the sights, sounds, and scenery around us. It was so good to enjoy our time and being in the BWCAW was a real treat over any other place we could have chosen. Today we hiked the portage trail over to Townline Lake. This is the main route on the way to Lake Polly and eventually the “Lady Chain Lakes to Sawbill”. In the afternoon while talking I created a new item to eat while tending to the fire. Chopped up onion, grilled it and then diced up some summer sausage and added to the mix. Scraped this out of the pan and put it on an English muffin added cheese and placed back on the pan, covered it for about 3mins. The cheese was melted and the muffin on the bottom was toasted. It made a great lunch. In the evening after supper we sat and watched a magnificent thunderstorm roll in from the south. Lighting and eventually the rain, we kept dry under the tarp.

Day 4 – Woke up and got out of the tent about 5:30AM. The Fog was really thick and couldn't see anything in the lake. Started coffee and hot water and began to pack up camp. Once I had everything pretty much done except the tent I woke up my wife and we had breakfast together. The fog started to lift as we loaded up and was ready to head away. The paddling was great on smooth water with no wind. Everything was very quiet. There is a loss knowing we were heading out, yet we had created some great memories. About 10 mins from the boat launch we were intercepted the canoe police (forestry service personal), they were checking permits and just spending the day paddling. It is great to know they are they. I had my permit in my day bag. Afterwards I thought that maybe the permit should be placed in the map pouch. At 5:30PM we were arriving home, so close, yet worlds apart.

I'm now counting the days until my next permit is valid, later in the summer.

My wife is really looking forward to heading up again when it works for both of us. 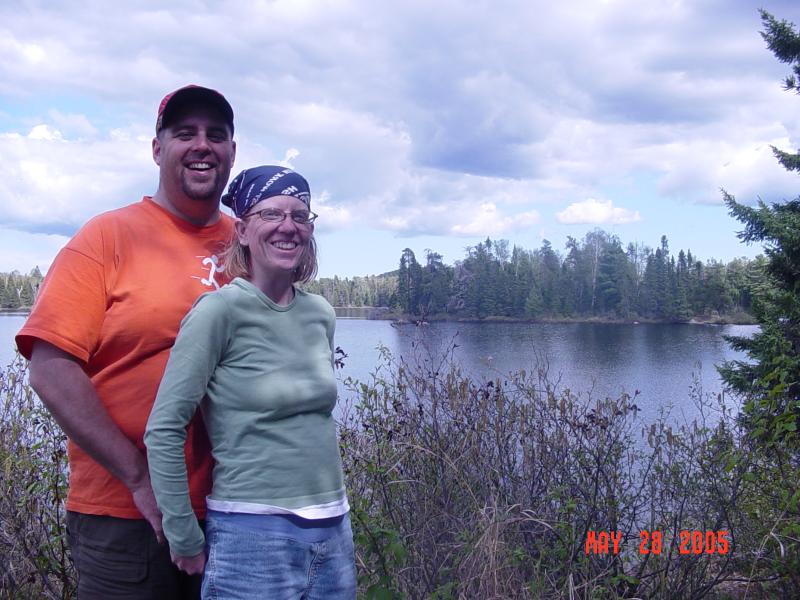