Trip Type: Paddling Canoe
Entry Date: 08/19/2012
Entry & Exit Point: Snowbank Lake (EP 27)
Number of Days: 4
Group Size: 2
Trip Introduction:
I've been taking canoe trips in Quetico since the mid-'80s and had never paddled the BWCAW other than on my way to or from Quetico. After meeting Debbie, who had one canoe trip on her resume', a 4-day trip to the Sylvania Wilderness that we took together in September 2011, we decided to do our first BW trip together.
Discuss Trip: View Discussion Thread (15 messages)
Report
After doing some research on BWCA.com and discussing possible entry points with several people on the board, we decided that our entry point would be #27 Snowbank Lake. A big lake for a put-in could be a challenge if the wind was howling, but we decided that with the options of portaging into Parent or Disappointment if the wind was bad, it would be a good choice. As it turned out, the morning of our entry was nearly calm and we paddled from the Snowbank landing all the way to the portage that leads to Boot Lake. It was a gorgeous morning to be in the BW. 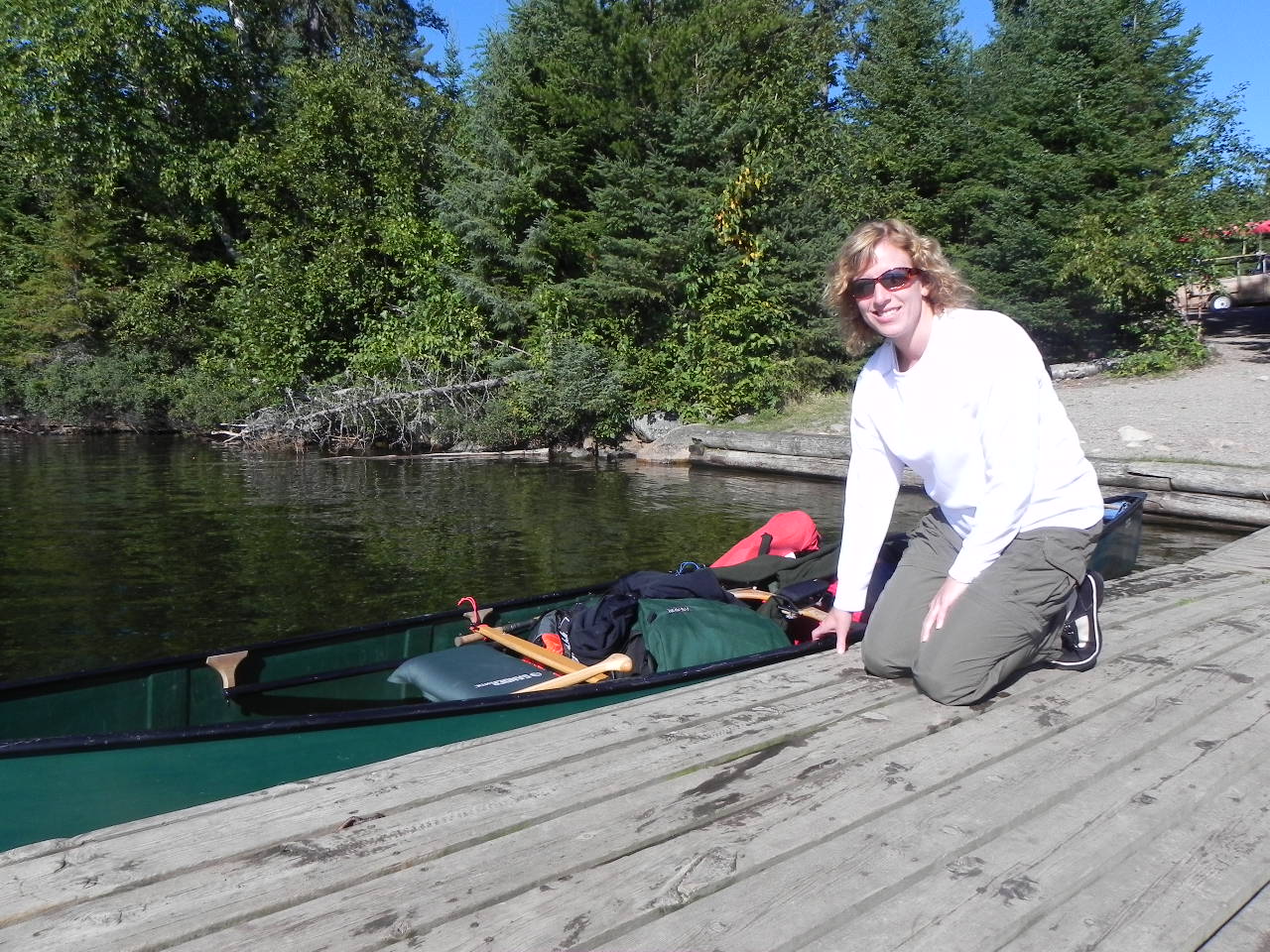 Debbie at the Snowbank landing


Our goal was to find a campsite on Jordan Lake. We also wanted to see Cattyman Falls and enjoy the sights and sounds (or lack thereof) that the smaller lakes had to offer.

The portages were short and relatively easy in this area with the exception of the portage from Haven to Ahbinodji. That one was much tougher and rockier than all the others. It seemed out of place given the modest portages we would encounter on the rest of our trip. 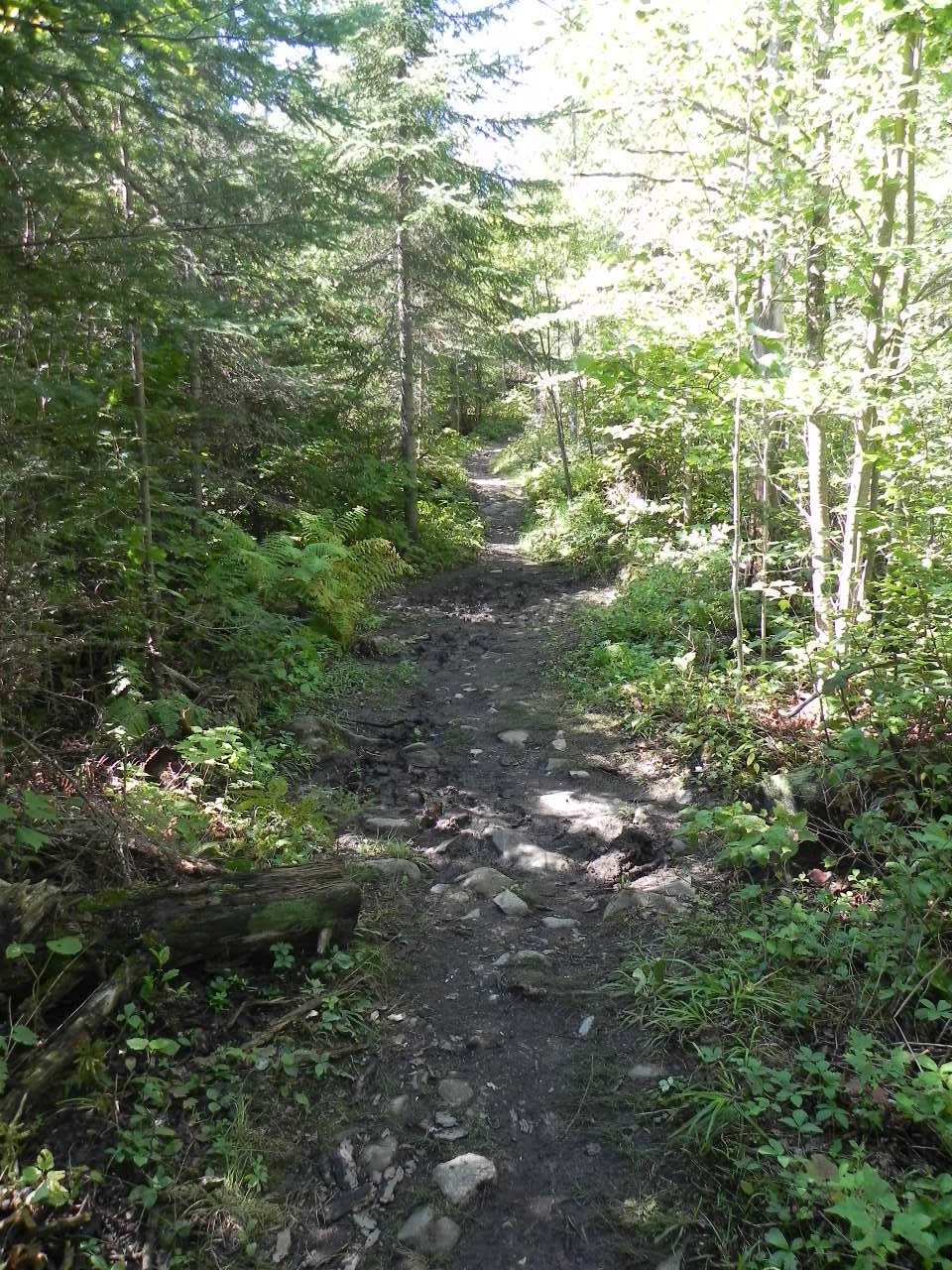 Portage trail between Snowbank and Boot


We tried to move right along hoping that we would find one of those sites on Jordan open. Unfortunately, we found out the hard way that paddlers in the BW stop paddling in early afternoon once they find an open site. Every site we passed was full, so we pressed on to Ima Lake. When we got onto Ima, a lake that I had figured to be the farthest east we would go, I was running out of map. There were four sites marked on my map to the south. Thankfully, one was open at the portage into Alworth Lake, and a dandy it turned out to be!

Debbie did a great job paddling and on the portages, but had a little mishap getting into the canoe at one of the landings. The rock she was standing on was sloped to the water and her feet went out from under her and she fell and slid into the water up to her waist! Other than the fact she scraped her leg and got a bit of a bruised hip, it was kind of funny to watch her gradually slide down into the water in what seemed like slow motion. (Don’t tell her I put that in the report!) A credit to her, though... she laughed it off and got right back in the canoe. Thanks to the sun, her nylon zip-offs were dry in no time. 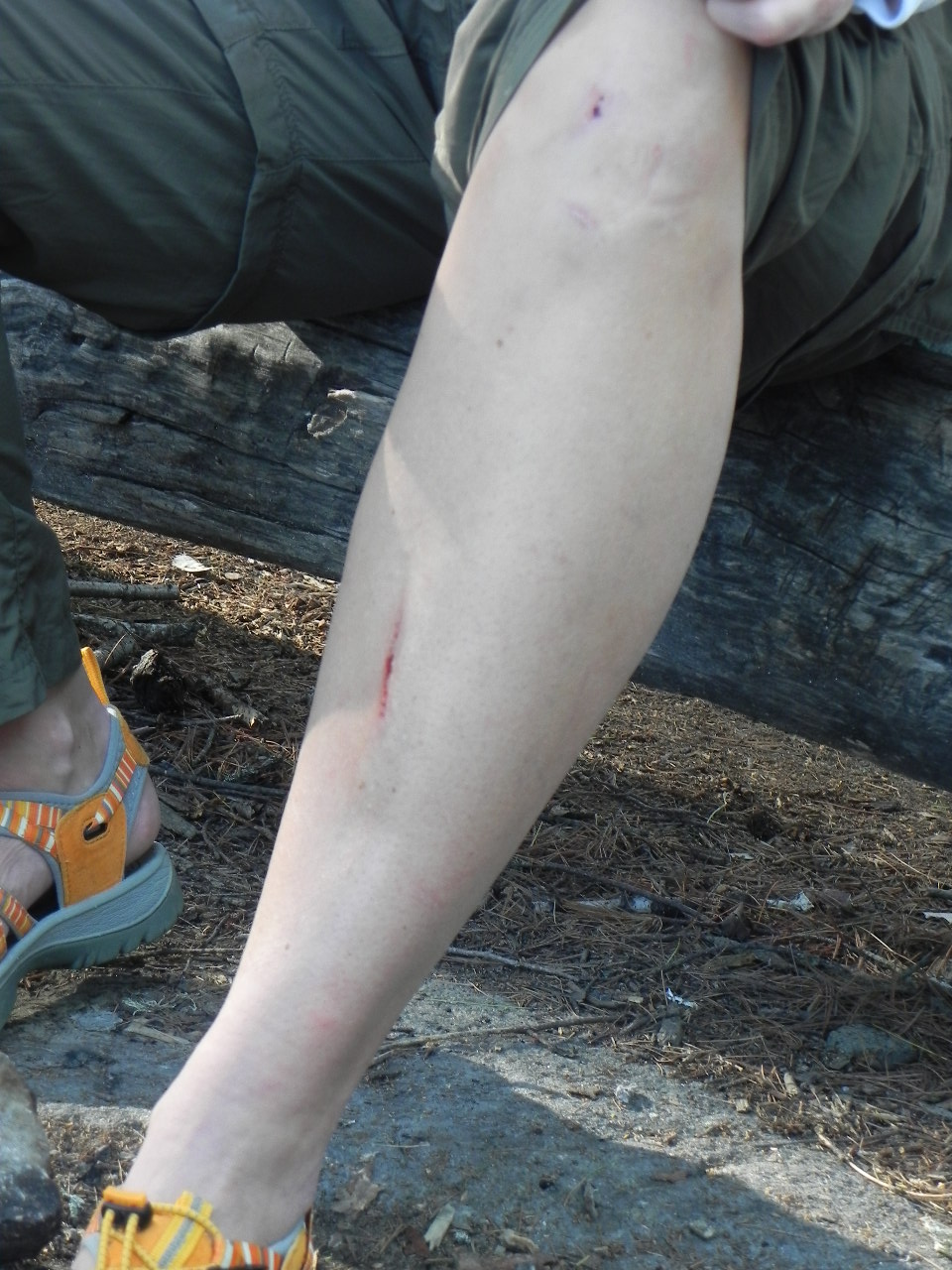 The wounded leg (it looks better in the photo than it actually was). 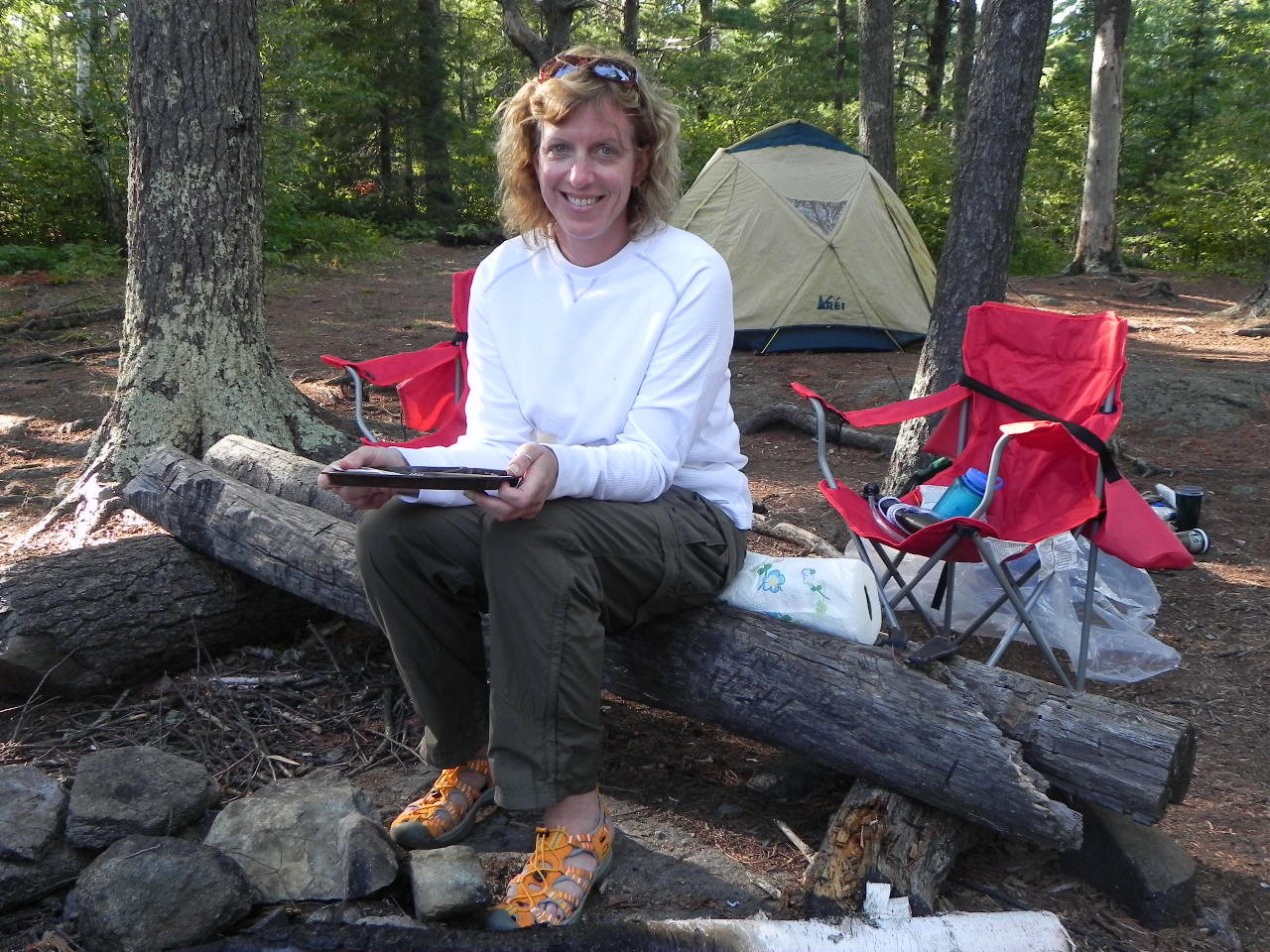 Once we got to our site and got camp set up, life was good again. We'd had a long day - probably nine or ten portages - and I know Debbie was tired. She still had a smile on her face, though, as I was getting dinner ready. 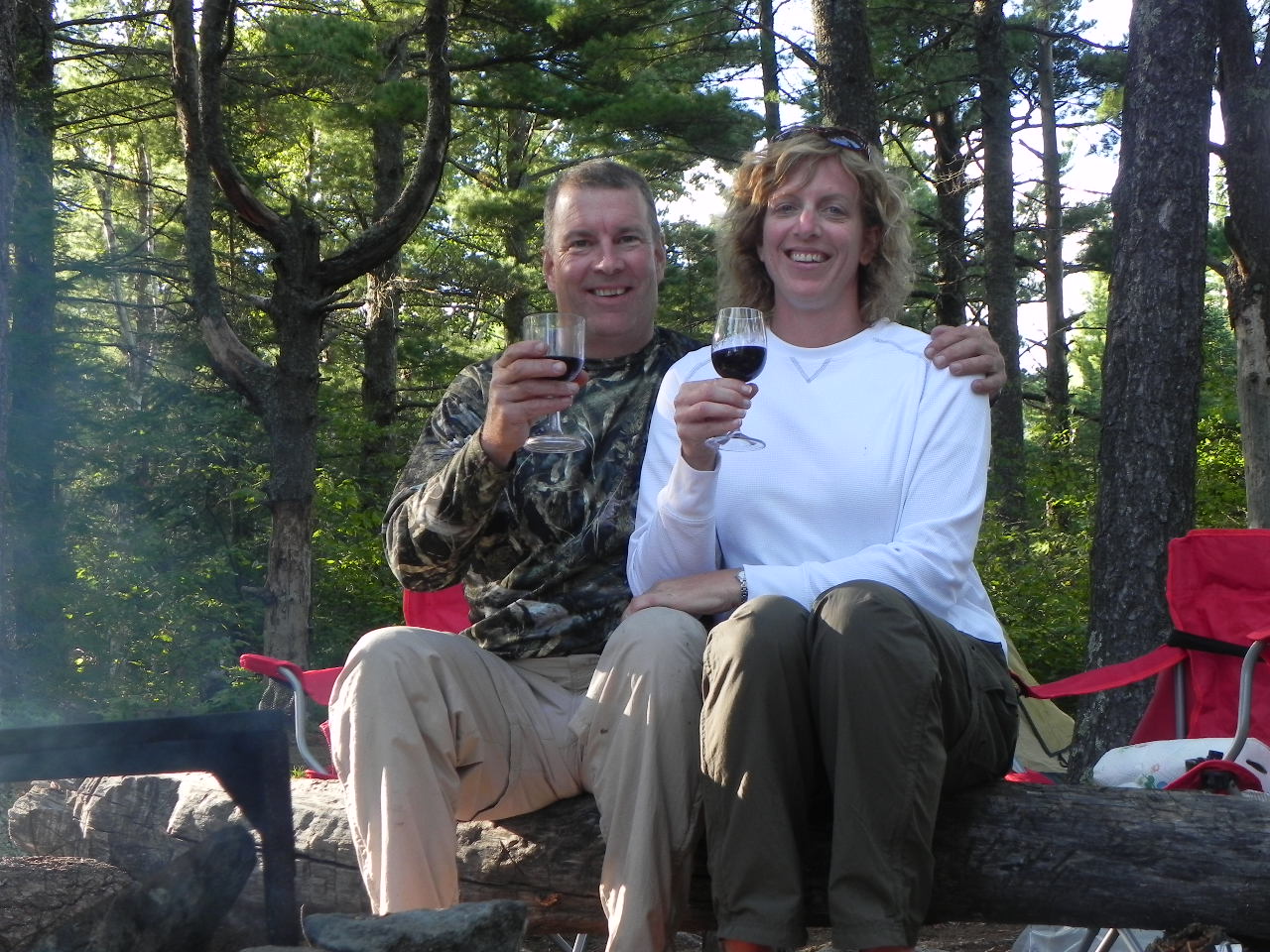 Wine to go with our steaks and wild rice was just what the doctor ordered.
After a good night's sleep, we awoke to see Alworth Lake as flat glass. 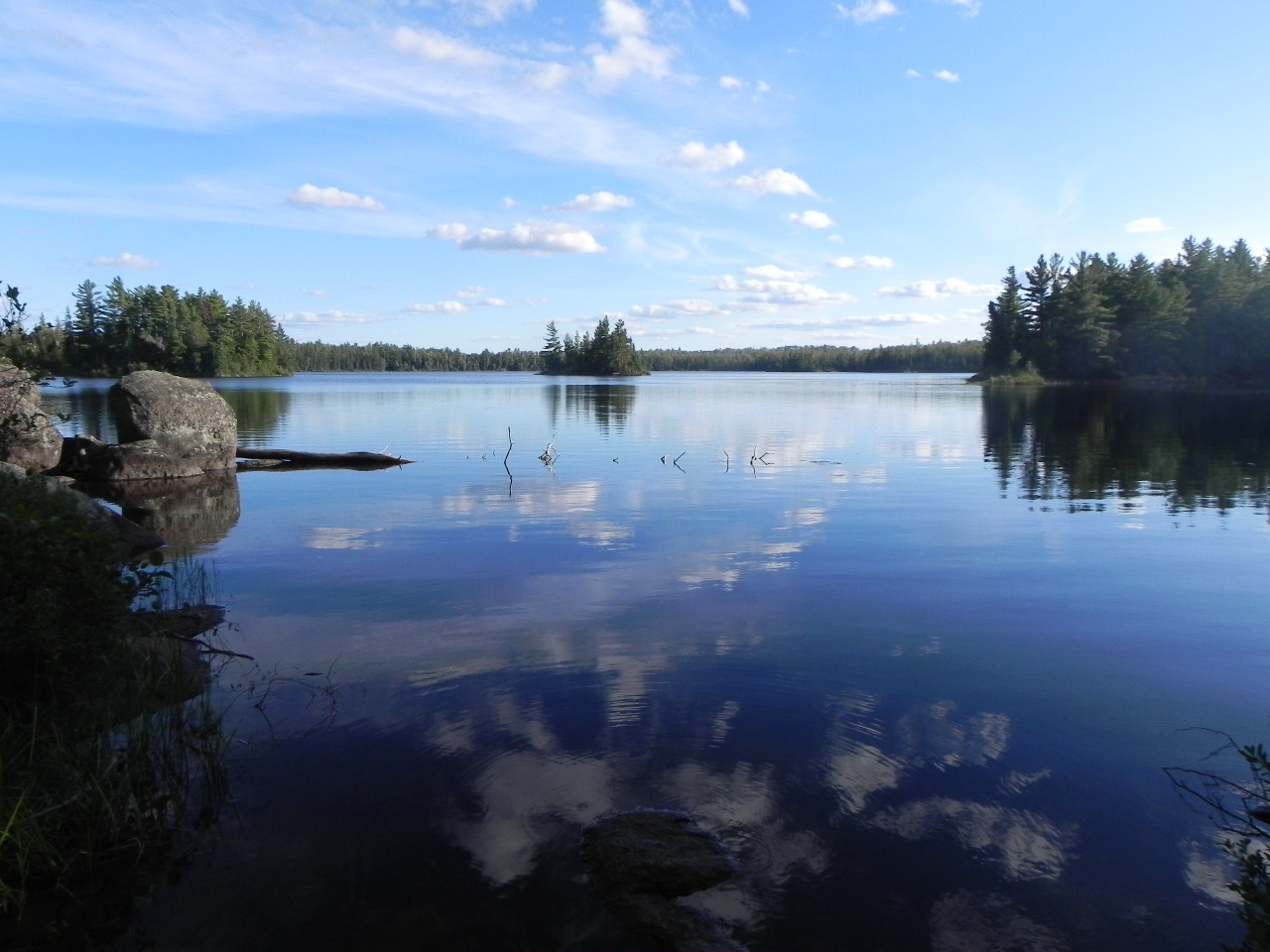 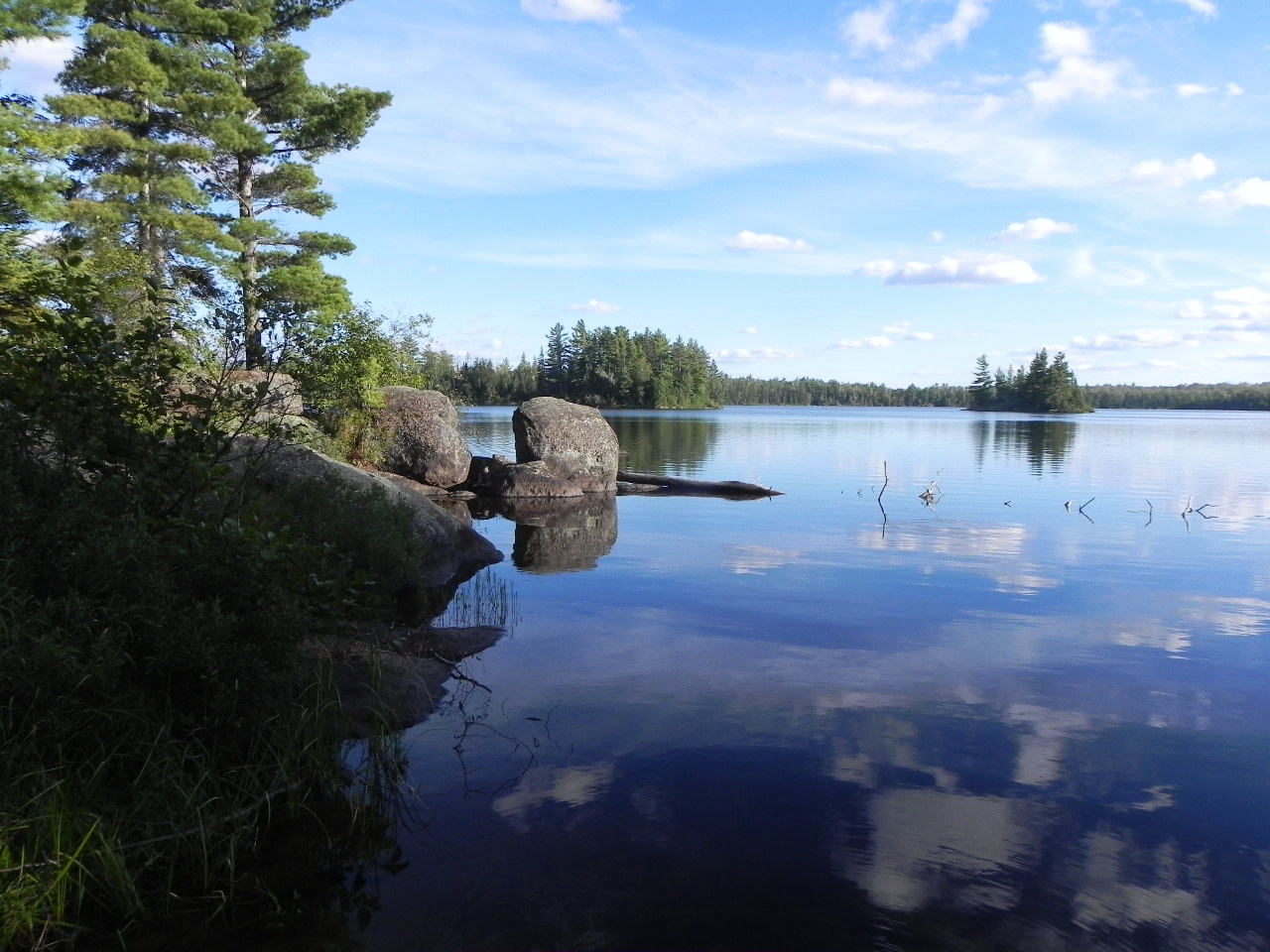 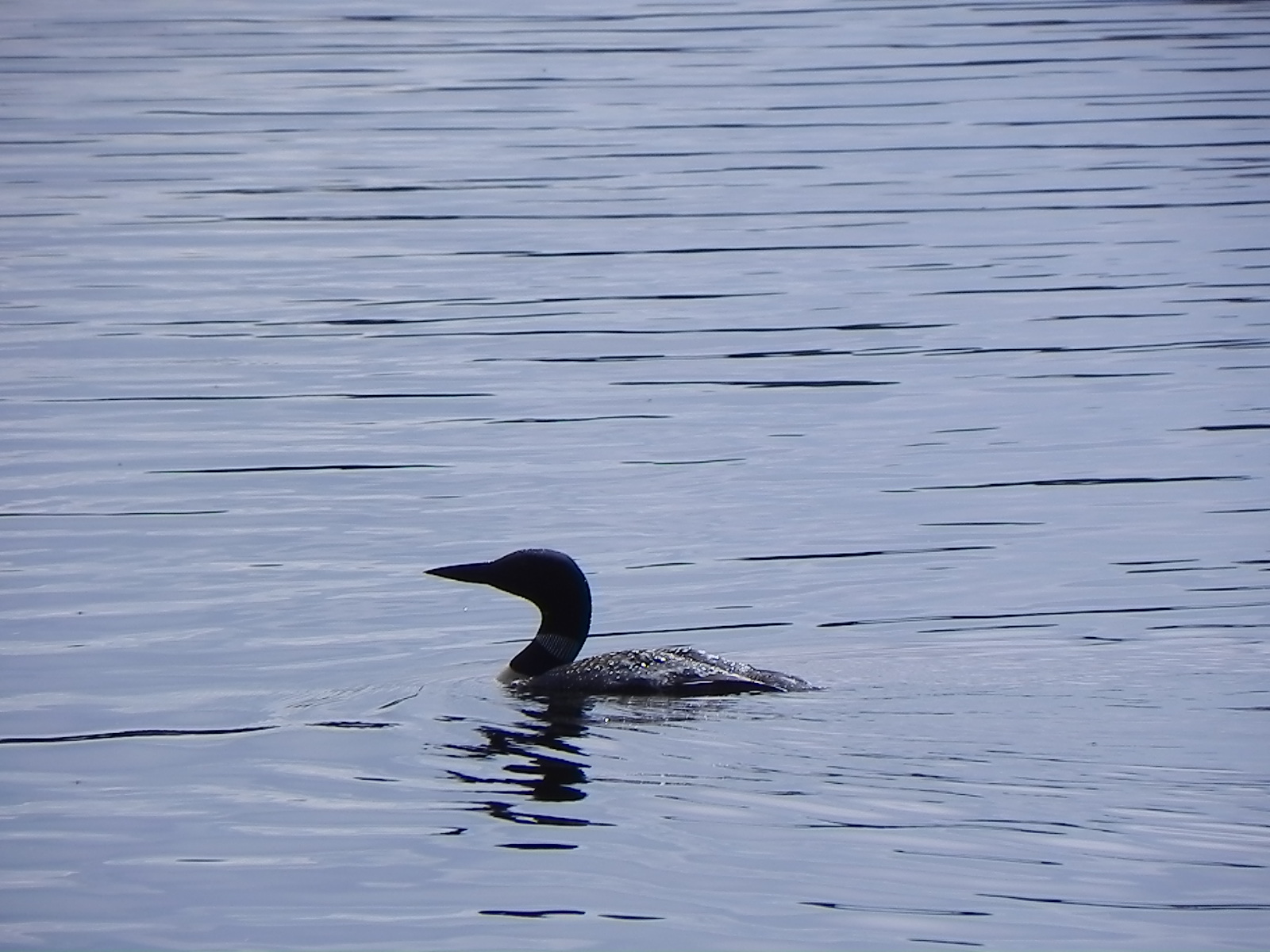 I went out to get some water and saw this loon swimming around. This was just one of what seemed like dozens of loons we saw and heard during our two nights on this beautiful campsite. 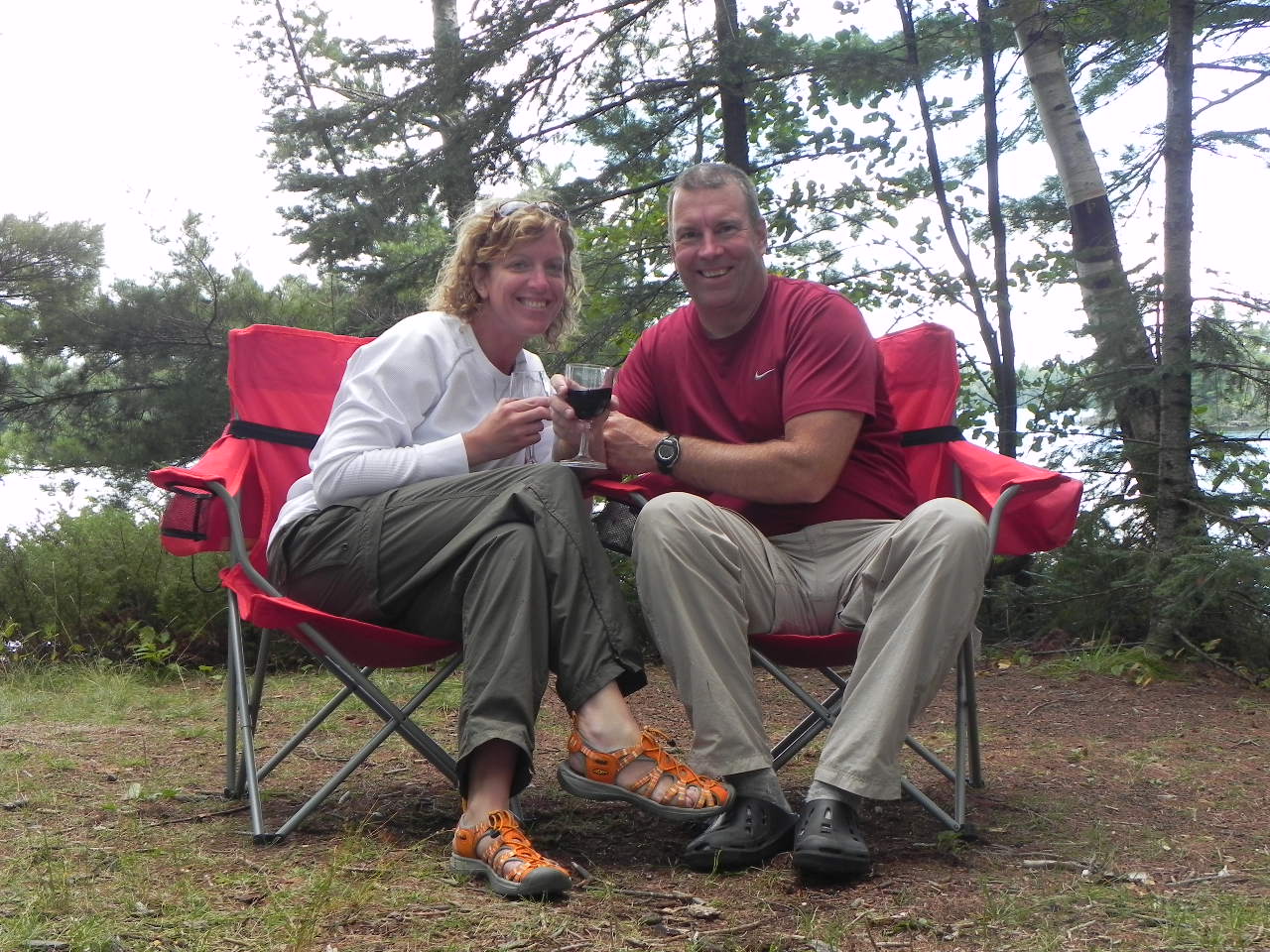 After a lazy day in camp and doing a little fishing, it was happy hour once again. We brought sling-type lawn chairs as our "luxury" items and we were glad to have them. Easy to carry on the portages, too. 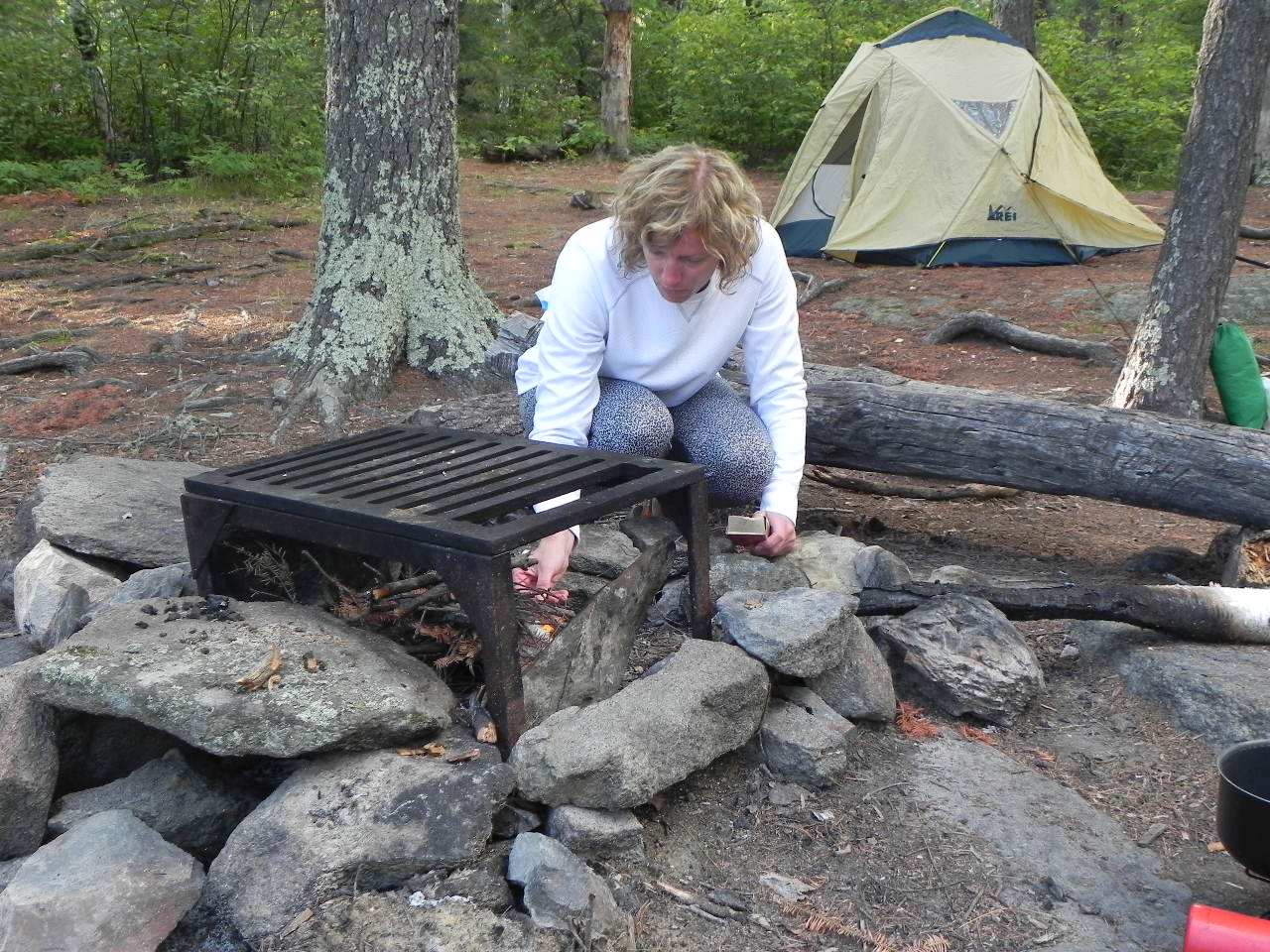 Here's proof that Debbie wasn't too tired to start a fire.


After another beautiful night in the Boundary Waters and being serenaded by loons for what seemed like hours, we awoke on Tuesday morning and started packing to start our trip back toward Snowbank. We didn't really have a destination in mind but figured we would be near Disappointment Lake. 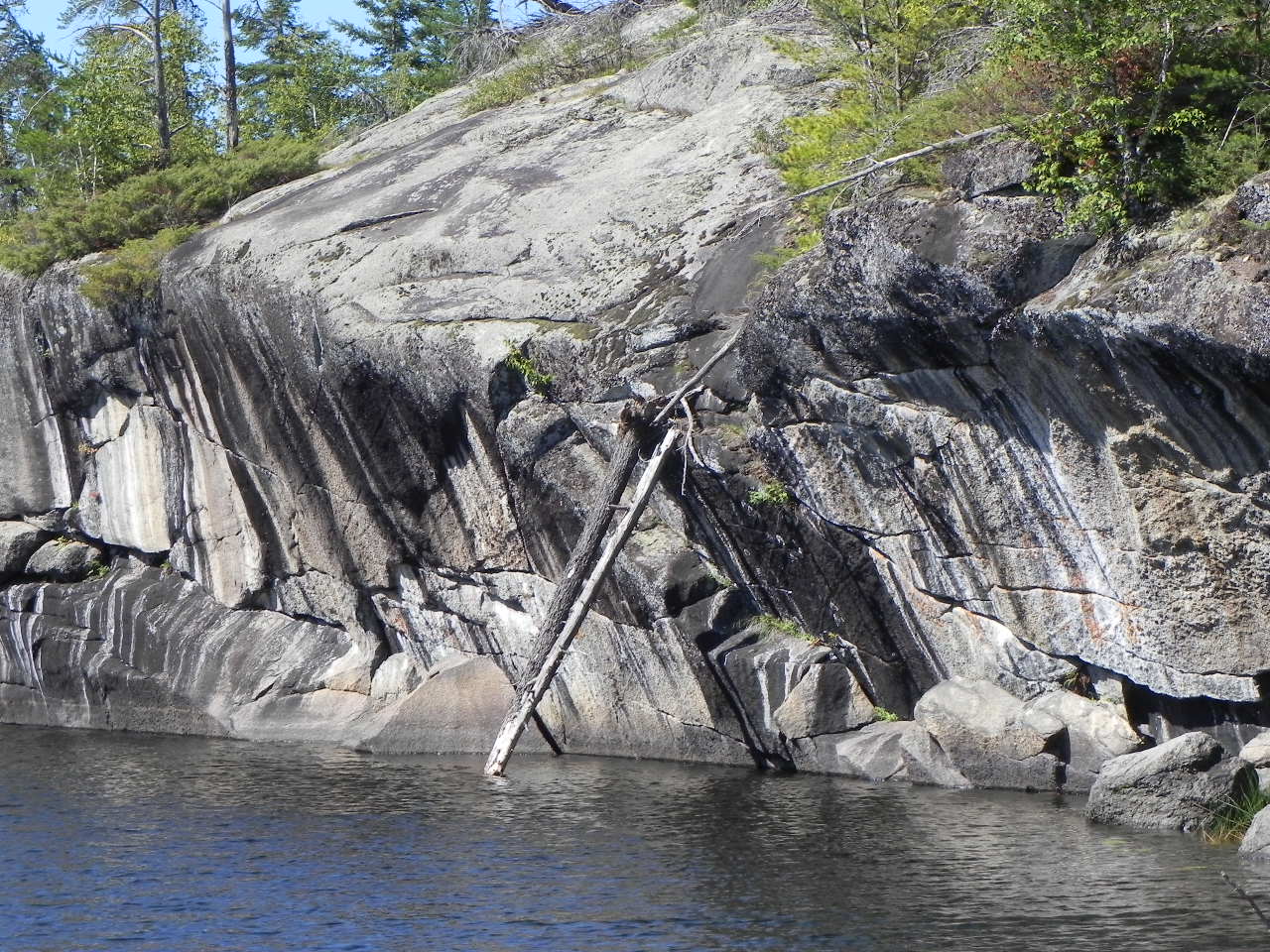 Paddling through the Jordan narrows, I just had to stop and take a photo of these two logs that appear to be holding up the huge rock wall. 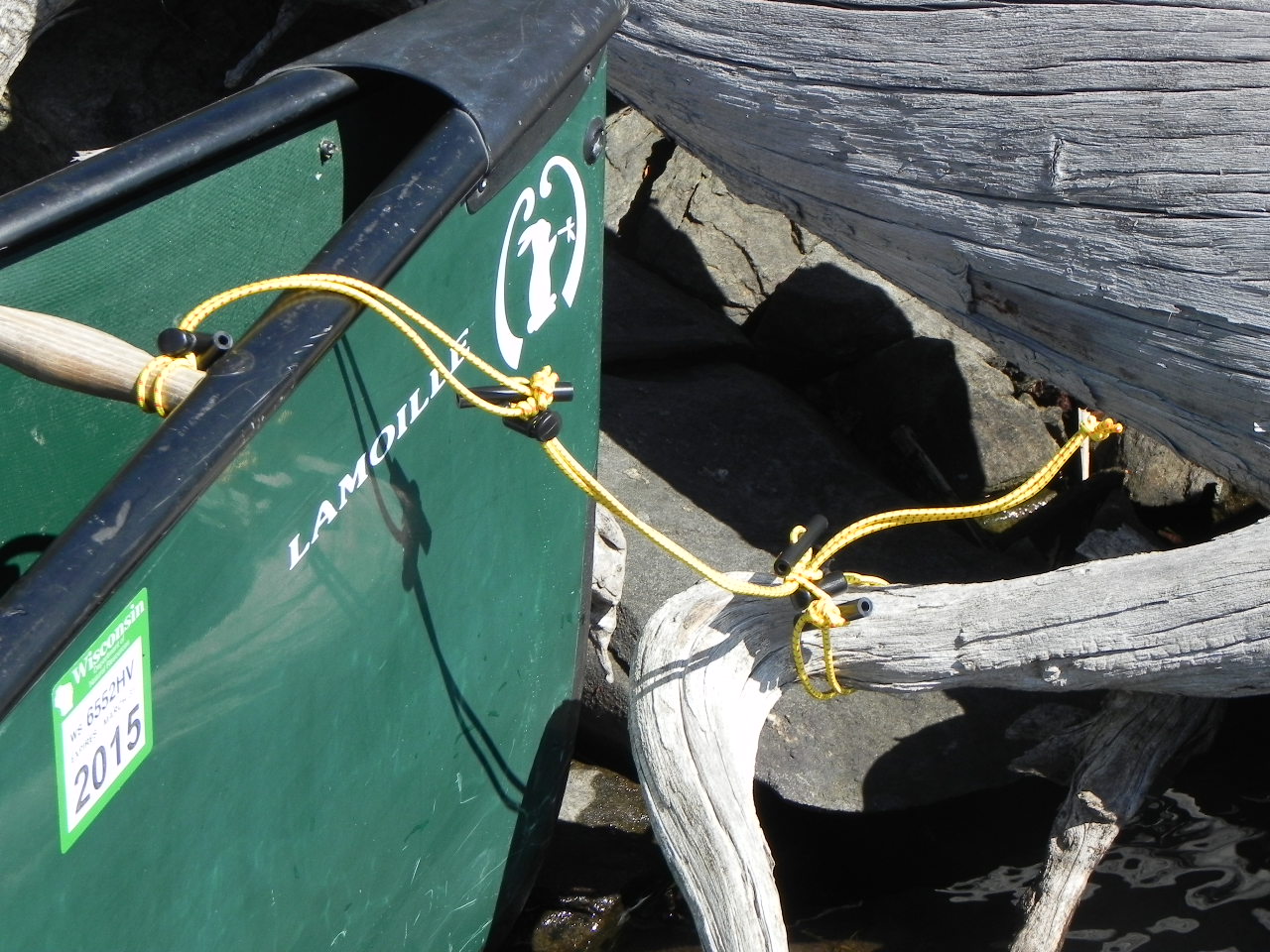 With all my ropes packed away, I used multiple Bungee Dealee Bobs to secure my canoe while Debbie and I checked out Cattyman Falls. 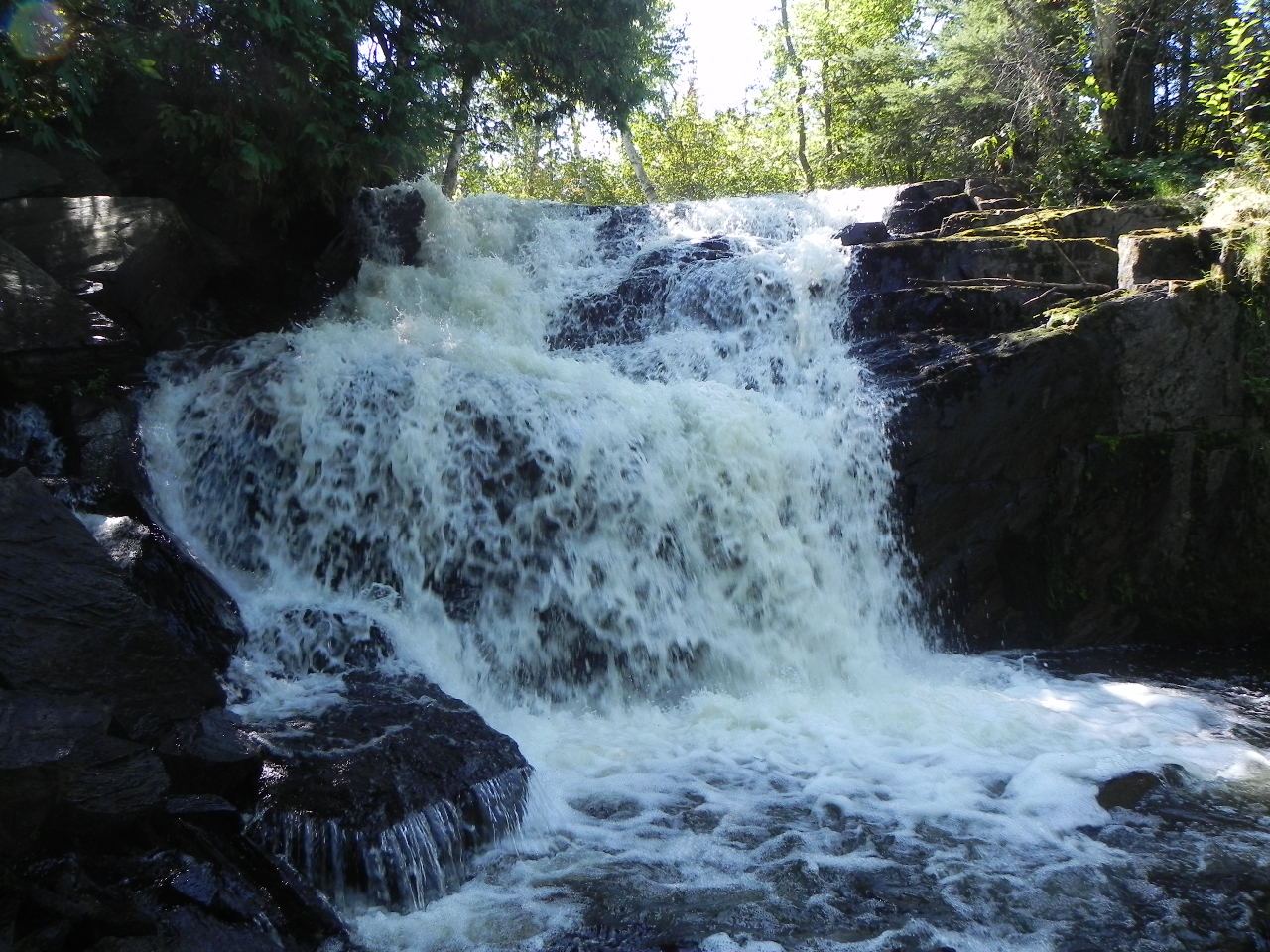 And Cattyman Falls had a lot of water flowing over it. 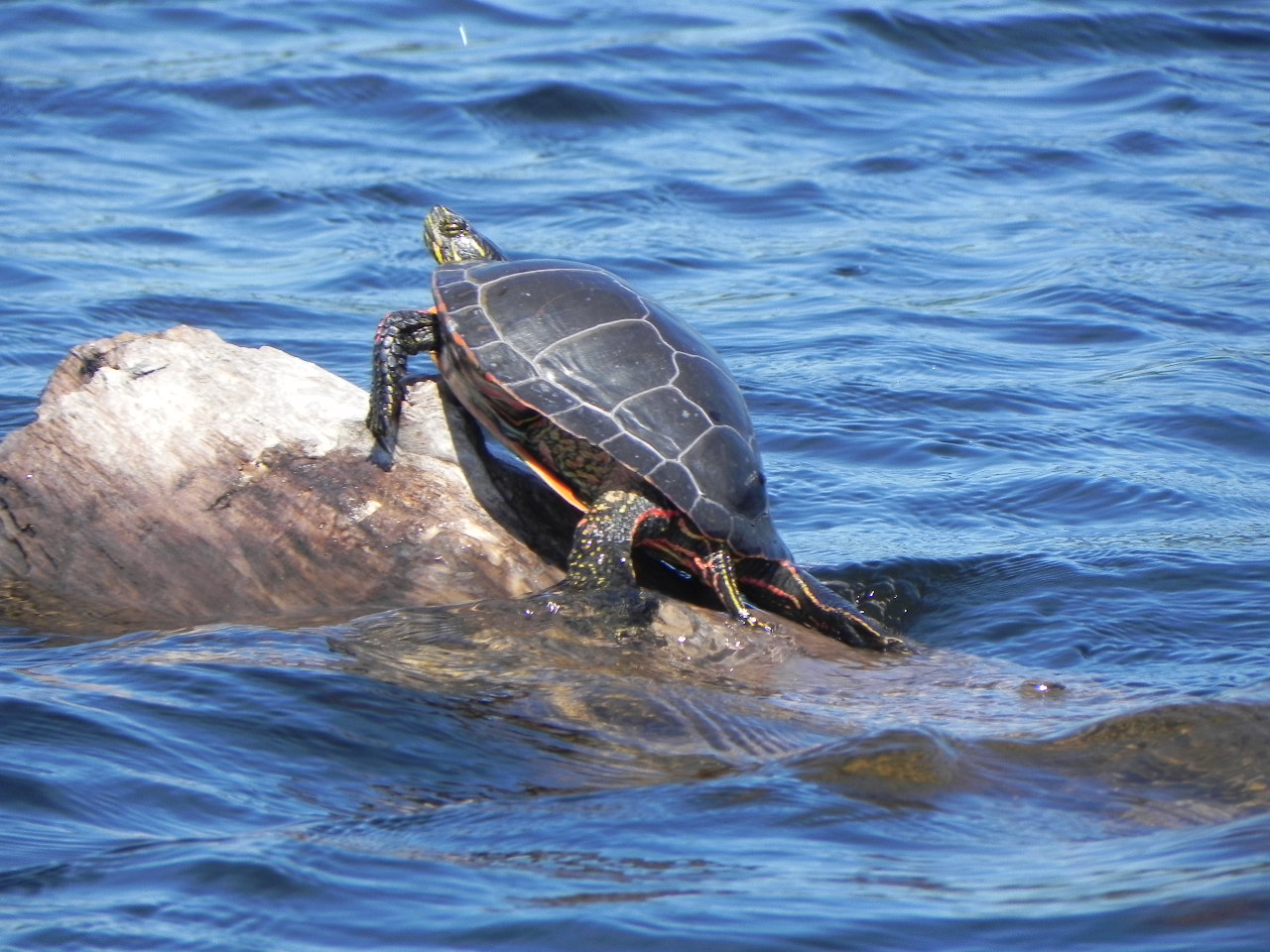 This little fella was sunning himself on a log in the middle of Cattyman Lake. We paddled past him on the way to Adventure Lake. 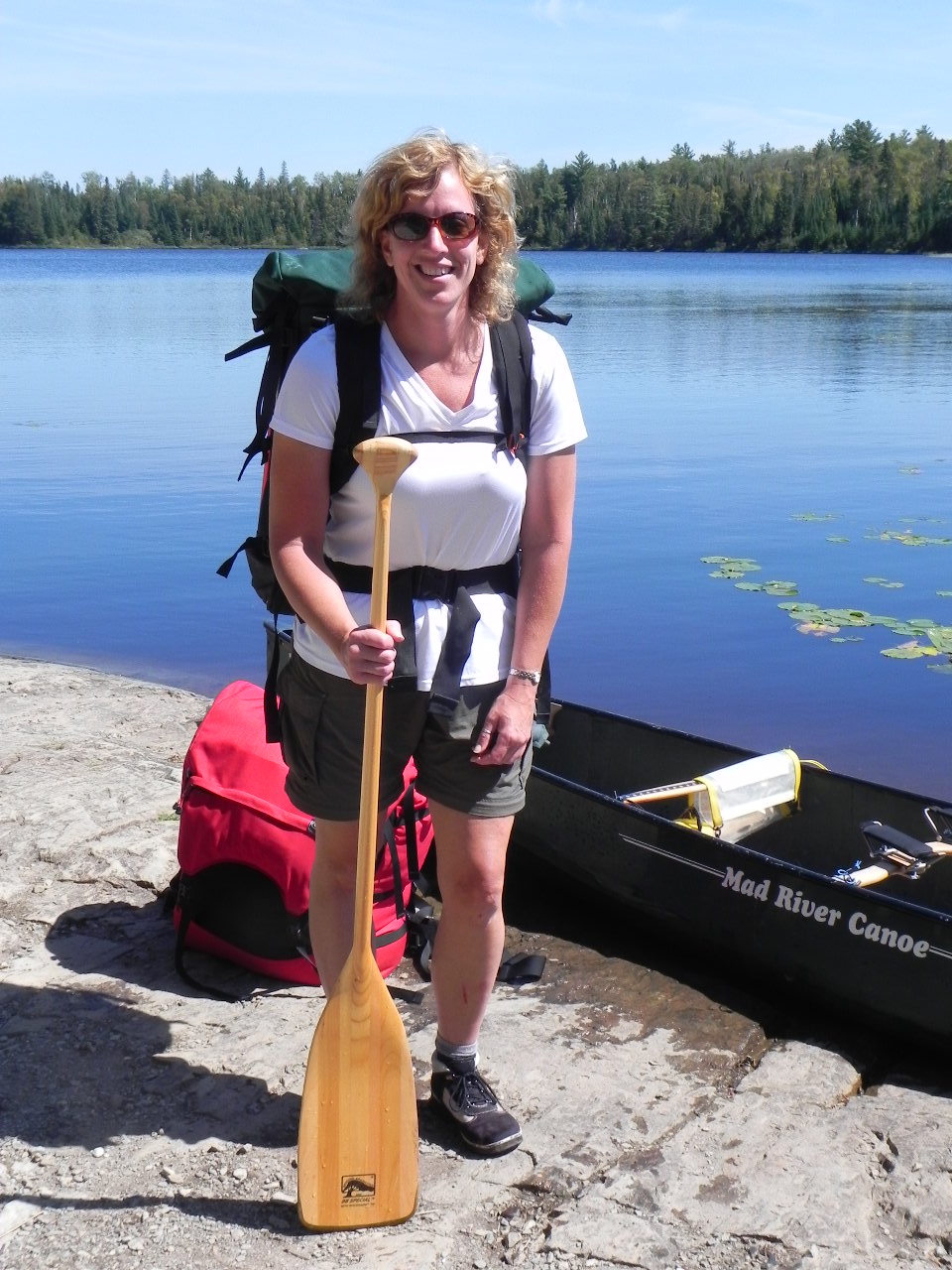 Debbie at the portage from Adventure to Jitterbug. 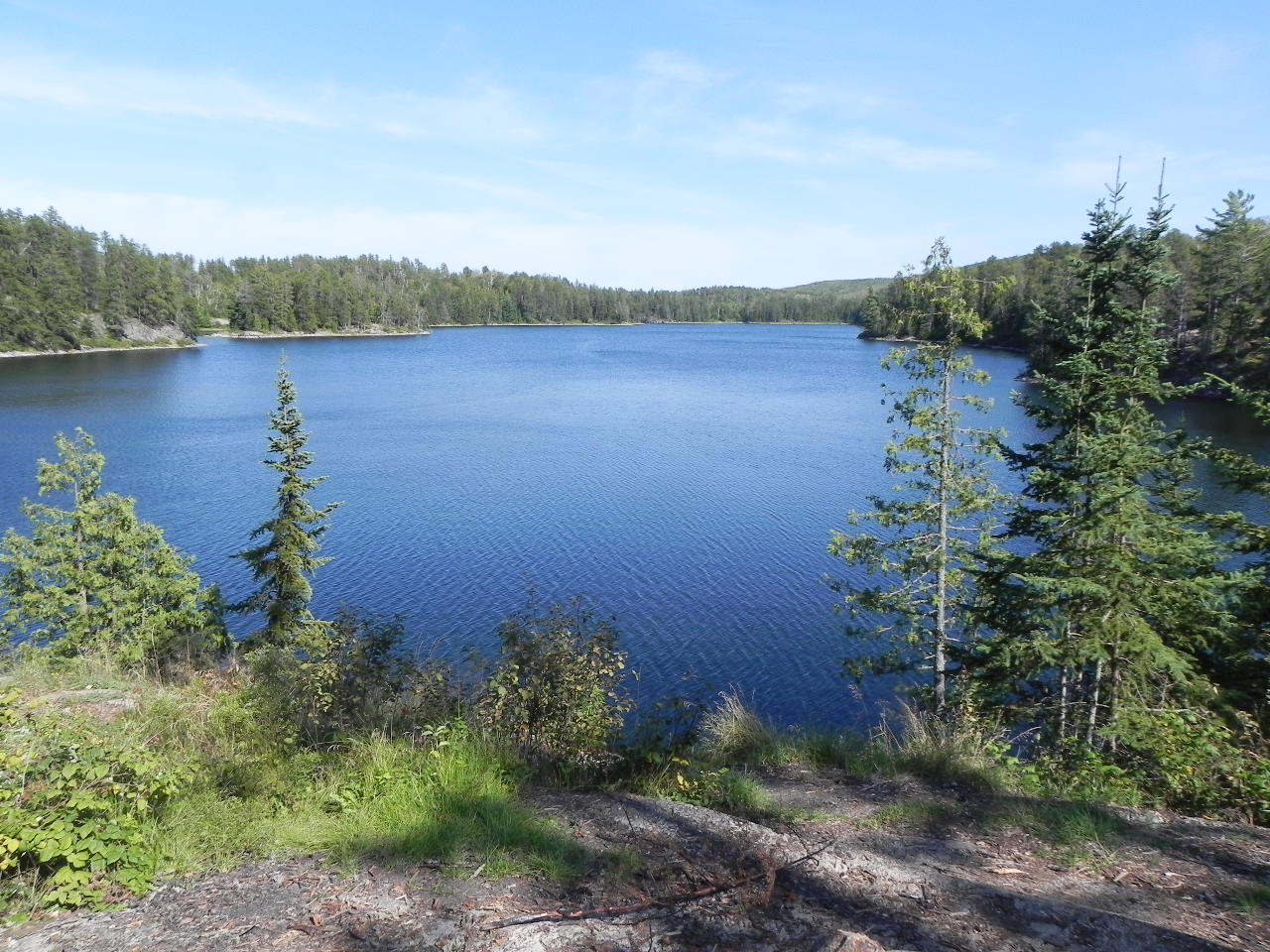 And after a pleasant paddle from our site between Ima and Alworth, we found this beautiful campsite overlooking Ahsub Lake. What a view we had. There is another campsite on the lake, but it's hidden by the island on the left side of the photo. We saw no one until the next morning.


I went out and did some fishing, but didn't realize I was trying to fish for walleyes in a lake trout lake. I dropped my anchor overboard and just about lost the entire 40' rope. Went as shallow as I could, but didn't have any luck. 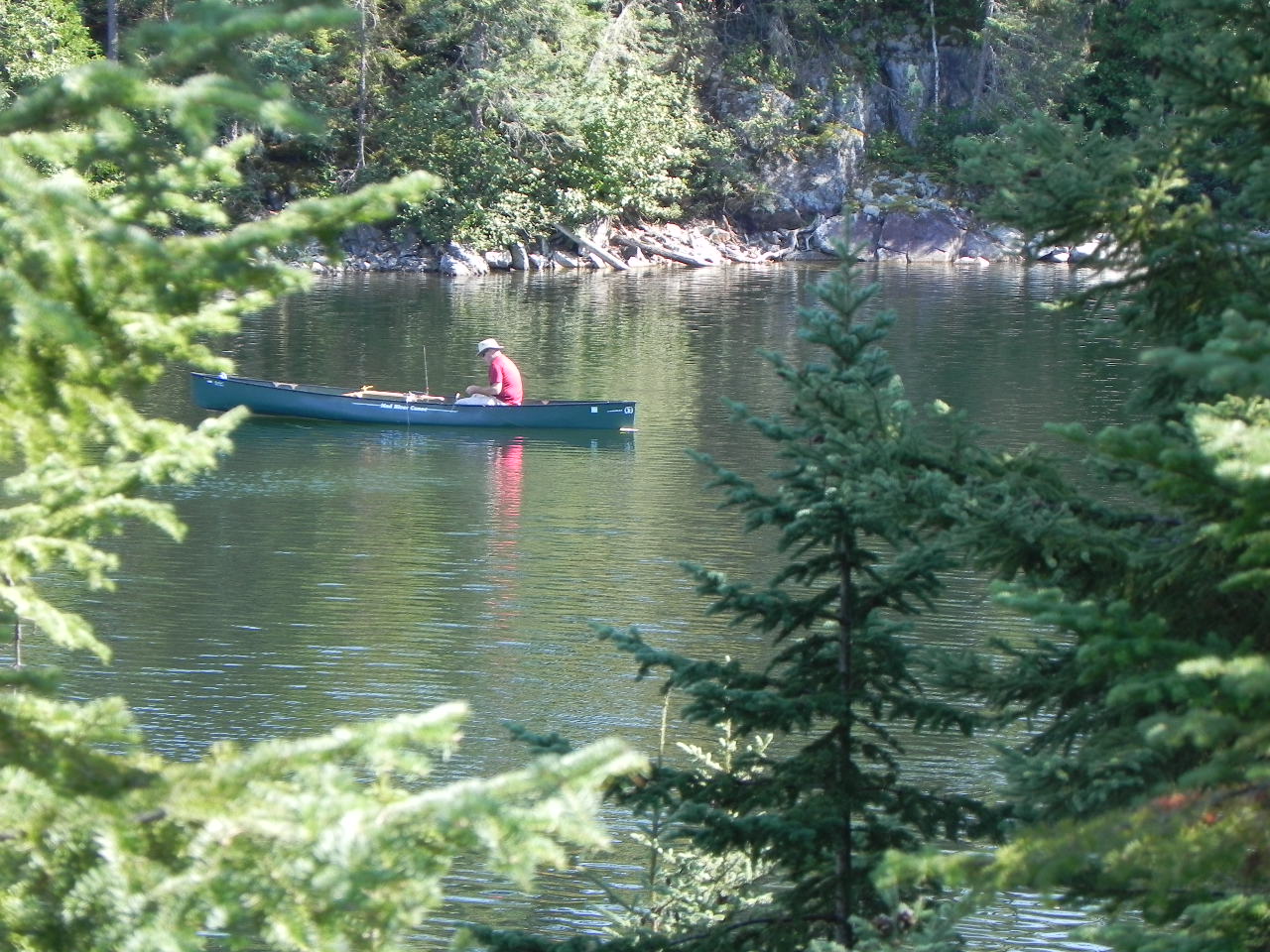 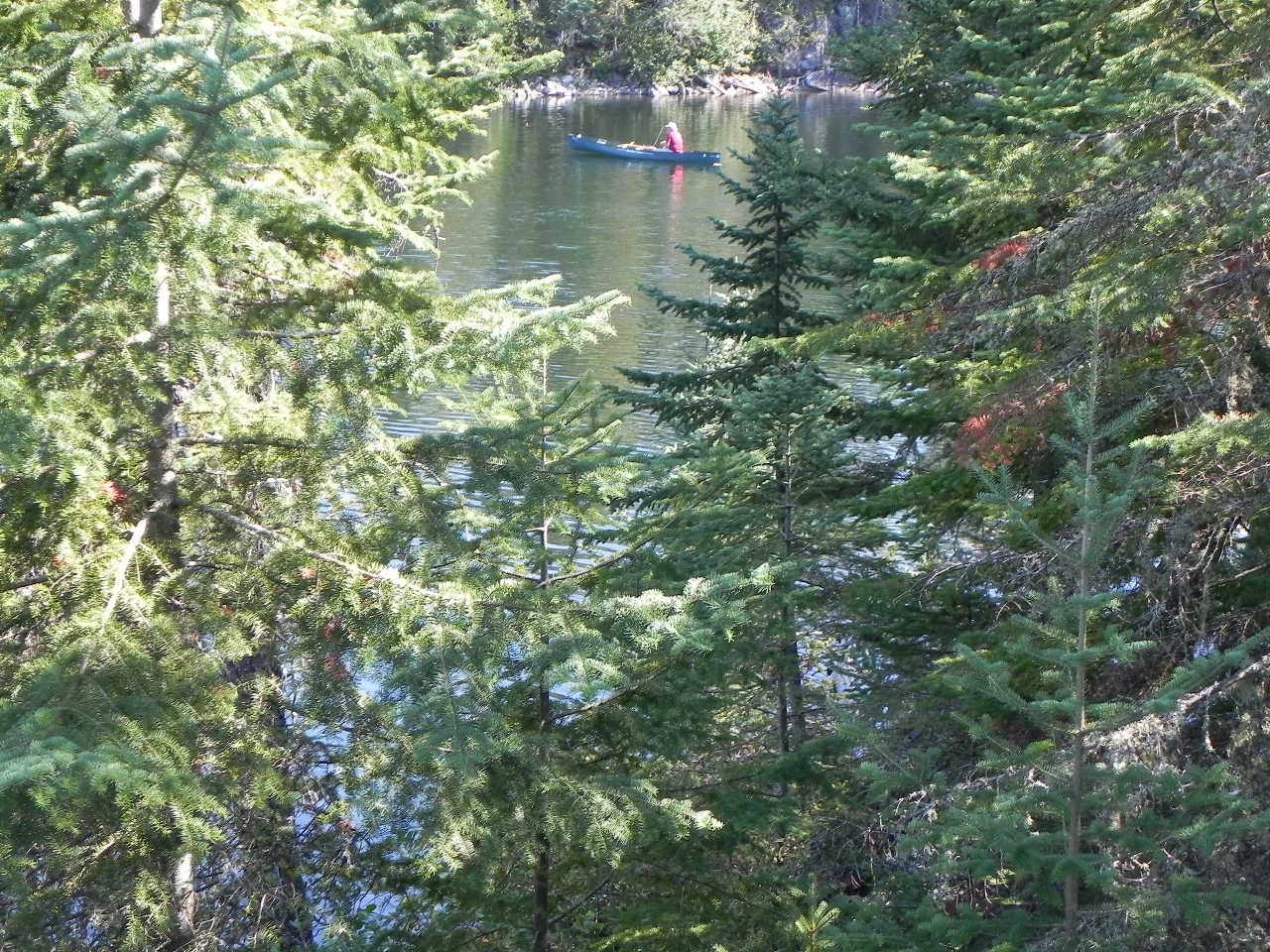 Some random shots from our campsite on Ahsub... 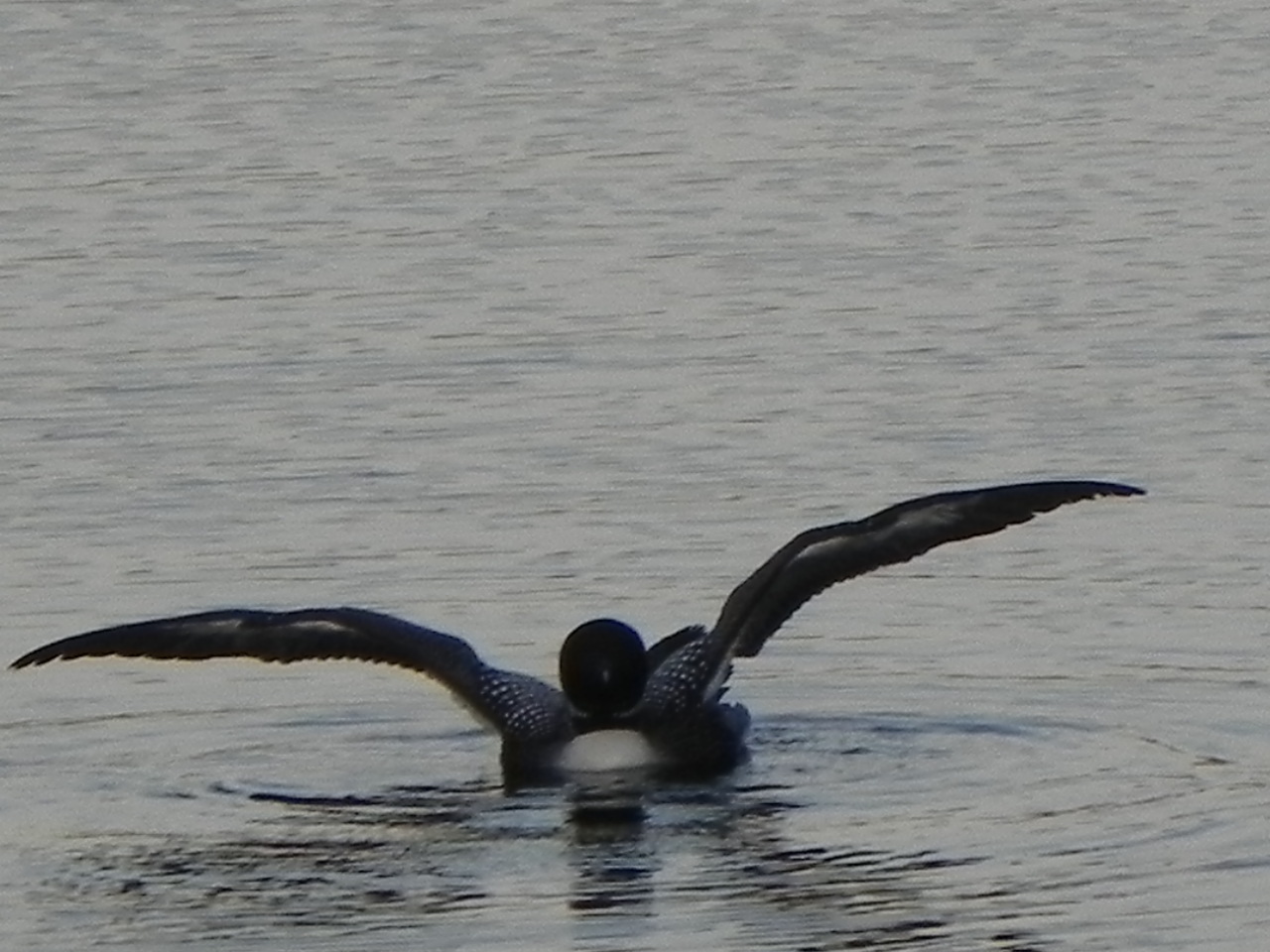 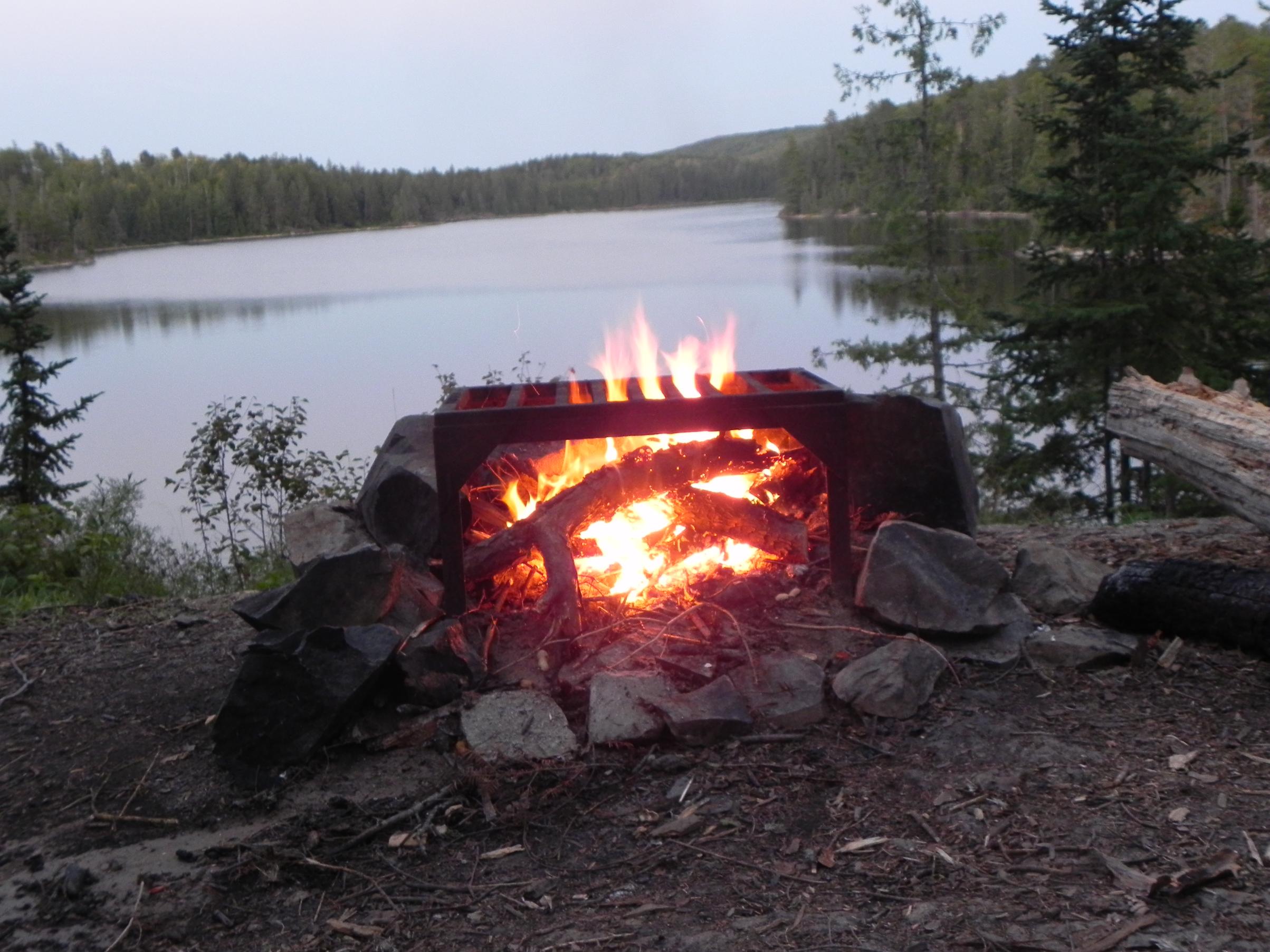 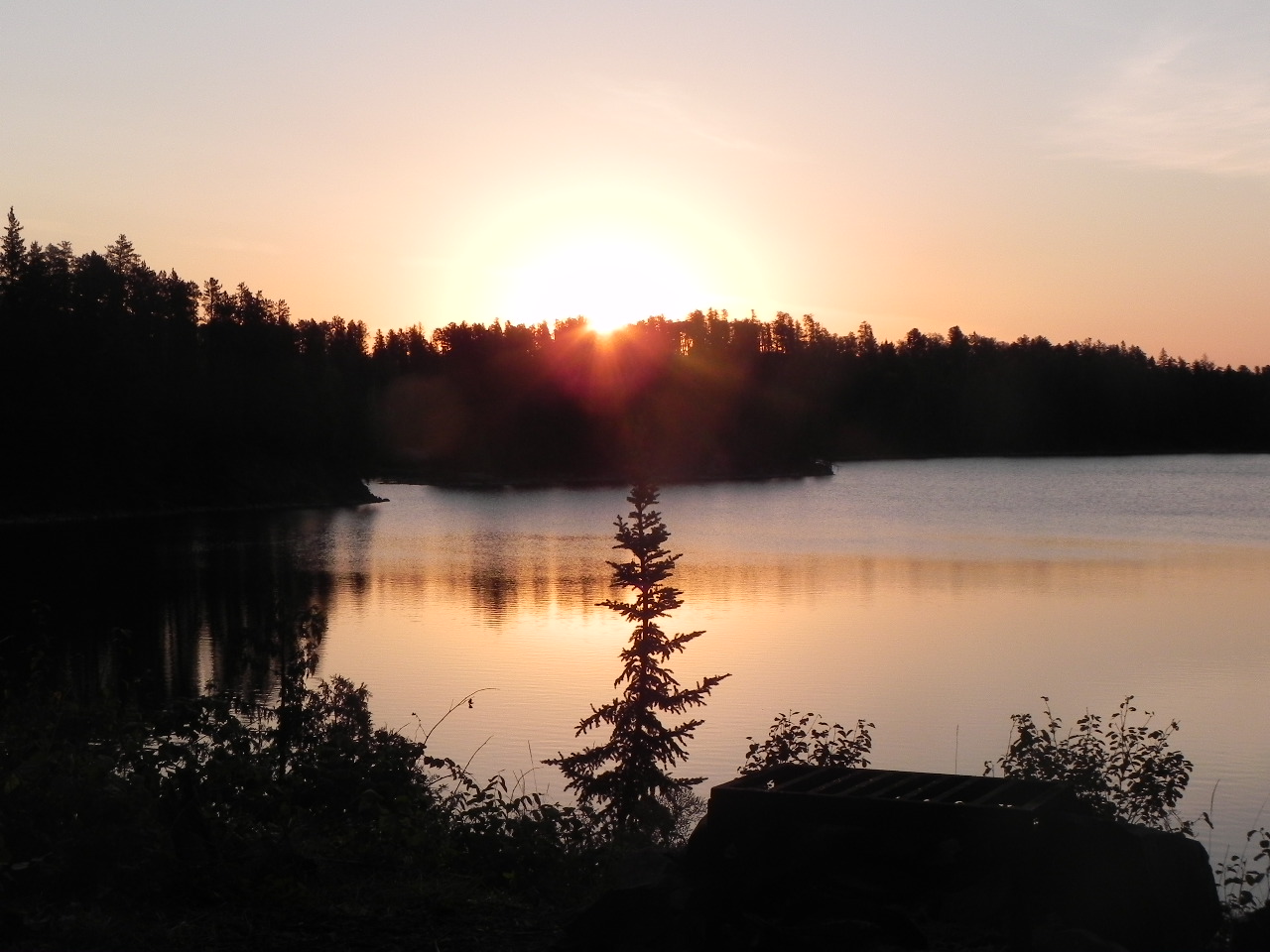 After a breakfast of Triple Berry muffins made in the Bakepacker, we packed up and headed for the portage to Disappointment Lake. Met a group coming through so we waited in the canoe out in the water while they reloaded and shoved off. Making small talk, I noticed the Wisconsin boat registration decals on their canoes so I asked where they were from. When they said, "Green Bay", we immediately had something in common. Come to find out, one of the guys doesn't live too far from me. Small world.

The paddle down Disappointment was awesome. Looked just like a lake in Quetico. In fact, in some ways, it reminded me of Quetico Lake. Met a group of young guys paddling in that already realized they were going to run short on sunscreen. When they asked us if we were headed out and if we would mind giving them our leftover sunscreen, we were more than happy to oblige.

Took the 140 rod portage from Disappointment to Snowbank instead of taking the 80 rod into Parent, paddling across Parent and taking a second 80 rodder into Snowbank. Turned out to be a good choice. For a 140 rod portage, I don't think it had much more than 10' or 12' of elevation change. It was pretty flat.

Snowbank was almost as calm as the day we paddled in. Made it to the landing in no time, loaded the van, strapped on the canoe and headed into Ely. A room at the Grand Ely Lodge was waiting for us, as was dinner at Burntside Lodge. A great way to end a great canoe trip into the Boundary Waters.