Labor Day at Alton with the Kids - Wolves and perfect Weather!
by caribouluvr

Trip Type: Paddling Canoe
Entry Date: 09/01/2012
Entry & Exit Point: Sawbill Lake (EP 38)
Number of Days: 3
Group Size: 4
Trip Introduction:
What better way to send off the summer than a trip into the BWCA? This would be my kids’ second overnight into the Boundary Waters, after doing a Labor Day weekend last year at Duncan Lake. That trip was a little rough in that it rained most of our full day there and it was cool. We also ended up coming back way too late Labor Day because it was so nice out that we day-tripped too long on Rose Lake. Getting back home at 2am the day my son was to start kindergarten did not go over well (although he was half-day afternoon thankfully). This trip was hopefully going to go smoother to get my wife to warm up to bringing the kids into the wilderness more.
Discuss Trip: View Discussion Thread (6 messages)
Report
On the way up we spotted the gorgeous blue moon that was rising over Lake Superior. My wife wanted pictures, so I pulled into Flood Bay and we got out to stretch our legs. The kids always love the shore of the Big Lake. Later, we spotted a wolf strutting across the Sawbill trail before arriving at Baker Lake campground to find the sites all full! We pulled into Sawbill campground and got one of the last established campsites available at around 10pm.

It was fun watching the Boundary Waters movie with my kids Will (Age 6) and Maddy (Age 4) in the morning shortly after Sawbill opened. They loved the part about the bear being chased away. We checked out the great BWCA/Sawbill patches they had for sale that we promised the kids at the end of the trip if they were good campers (they always are). We unloaded at the landing not without incident, as my son ended up falling in halfway where the dock separates from the dirt landing while my wife and I loaded the canoe. He was not happy, but the beautiful mist coming off the glassy lake was wonderful. We hopped the portage over to Alton, where it was also welcomingly calm. We were planning to head to a Beth Lake site my wife and I had stopped for lunch at a few weeks earlier, but we got to the south end of Alton just as a site opened up and decided to check it out. After realizing what a great site this would be for the kids, and not having to do the longer portage with our gear, we decided to make this our weekend home and daytrip to Beth later.

Shortly after arriving at our site, two forest rangers pulled up to check on our campsite and permit! Yes, they are out there. I've actually been checked several times by rangers. They were mostly interested in surveying the site for its condition. They were headed down the Lady Chain to check on campsites and do general enforcement.

My kids had a great time trying out our new double hammock as my wife and I drank tons of coffee and admired some of the nice red and white pine trees at the site. The kids and I swam some in the clear lake water and my kids ran around naming different spots of the site as “clubhouse,” “meeting place,” etc. Later, we trolled around the islands for a little bit and my daughter hooked a small walleye, but I couldn’t manage to get it in the net before it fell off the hook. She was exhausting after trying to reel in the baby walleye, so she grabbed a quick snooze while we continued to leisurely paddle (we had gotten up so early!). She was talking about the “sneaky walleye” all night. It would’ve been her first walleye, and I was bummed that I blew it.

My son and I took a sunset paddle together to get a better view because our site was east-facing, and I’ve recently become a sunset photo-taking freak. The sky was a little too cloudy, but the water was glassy and Will was a little pro with his Bending Branches Twig paddle. You could hear my wife and daughter laughing and playing across the calm water. When we landed at the campsite again, wolves began howling. My first time hearing a wolf pack! The kids thought it was great.

We had a small campfire and saw the big red moon rising in the hazy clouds across the lake. After the kids were in the tent, my wife and I drank wine by the lakeshore before turning in.

Another beautiful day, allowing us to relax in the hammock some more before we did our day trip for lunch at Beth. We made it across the 140 rod portage easily, since my kids were well trained hikers by this time of the summer after our many camping trips. The neat campsite we wanted on Beth was open for lunch, so we ate and let the kids explore for a bit. We were so glad we didn’t stay here, since Alton was surprisingly quiet and our campsite was so much bigger. We tried trolling Beth for a giant smallmouth, but no luck. We were hopeful because my son had surprisingly caught a 17” on Rose Lake last Labor Day weekend. On our way back to the campsite on Alton, I hooked into Maddy’s lost “sneaky walleye” and the 12” fish became a side dish for dinner.

It was cloudy and mild tonight and we had another small campfire. Shortly after the kids were put in the tent for the night, the wolf pack really started howling. The wolves went on for a couple of hours while my wife and I sat around the fire. It was fascinating listening to them call and respond to each other from miles away in all directions, and slowly moving around us as the night went on. My wife provided her usually witty animal narration about how this was wolf pup training night, where the adults stranded them during the day to see if they could make it back home on their own. It sounded like the younger wolves were frantic and the alpha male sounded like a drill seargent.

Halfway through the night I woke up to take a trip down the trail. I shined my light down towards the latrine and saw what appeared to be eyes glowing back at me, so I swiftly returned to the tent and told my wife. She said, “Well, try again closer to the campsite.” I didn’t waste time and got back fast. Let’s just say I was a little jumpy after all of the wolf activity.

Perfectly clear skies was the order of the morning again today. More hammock time and swimming was done as we reluctantly waited for the time to leave. The paddle back up north on Alton was pleasant in perfect early-fall sunshine as we hugged the eastern shore to avoid big waves. We got cold drinks at Sawbill after unloading and awarded our kids each a Boundary Waters patch from Sawbill’s selection. Because of our great weather and better-planned weekend, we made it to Duluth in time to stop for Grandma’s on the canal and still make it back home at a reasonable bedtime! 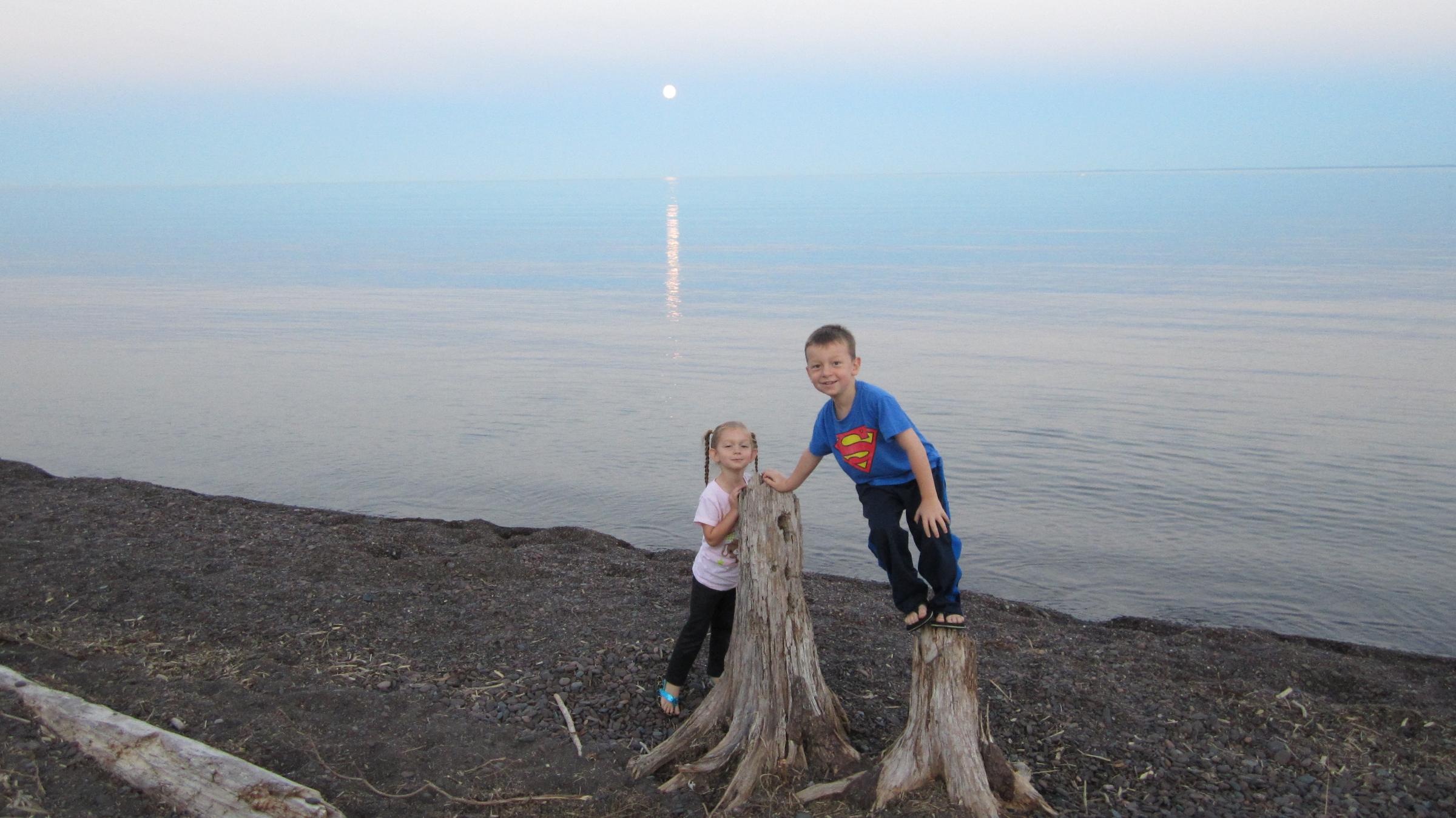 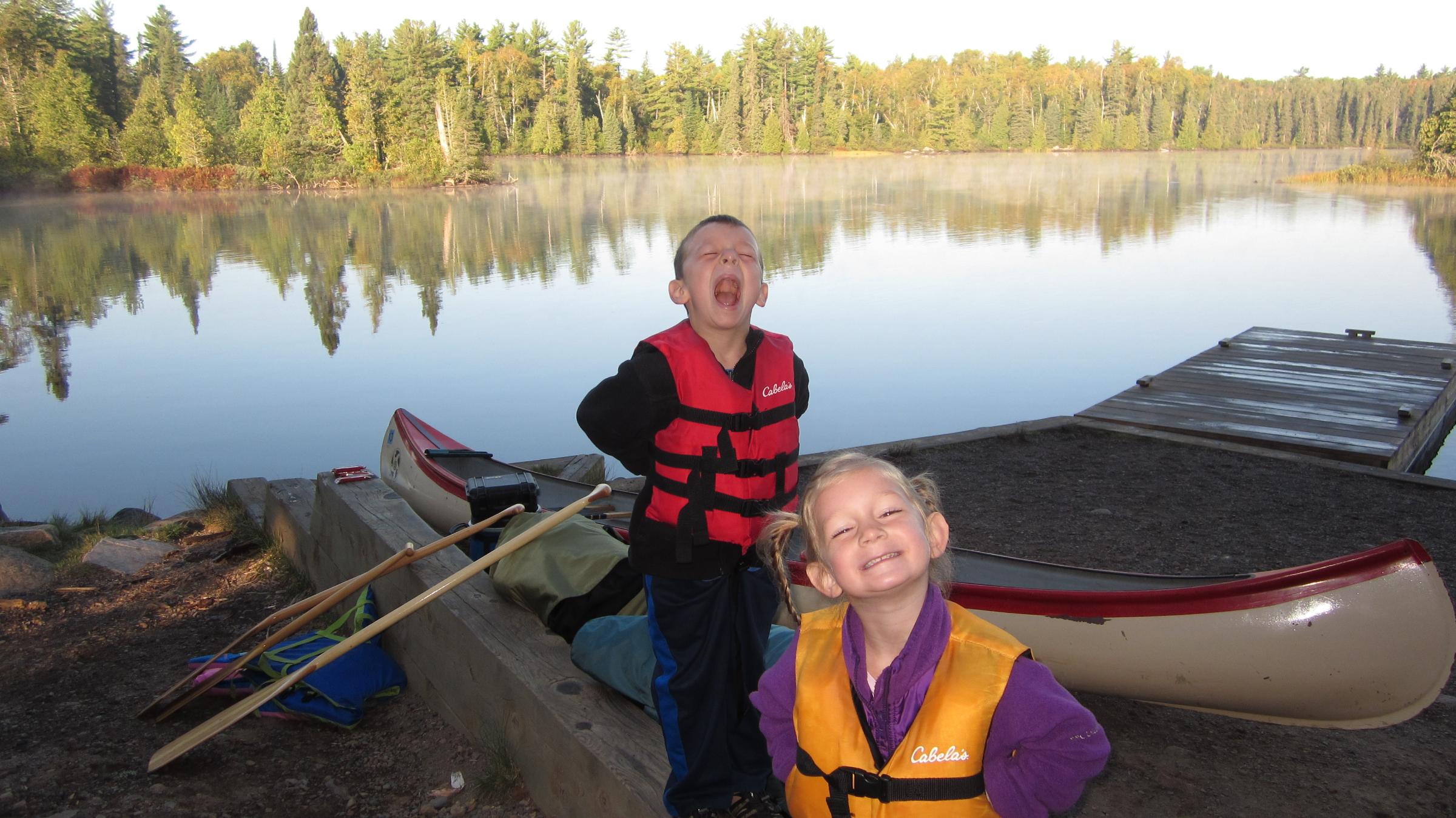 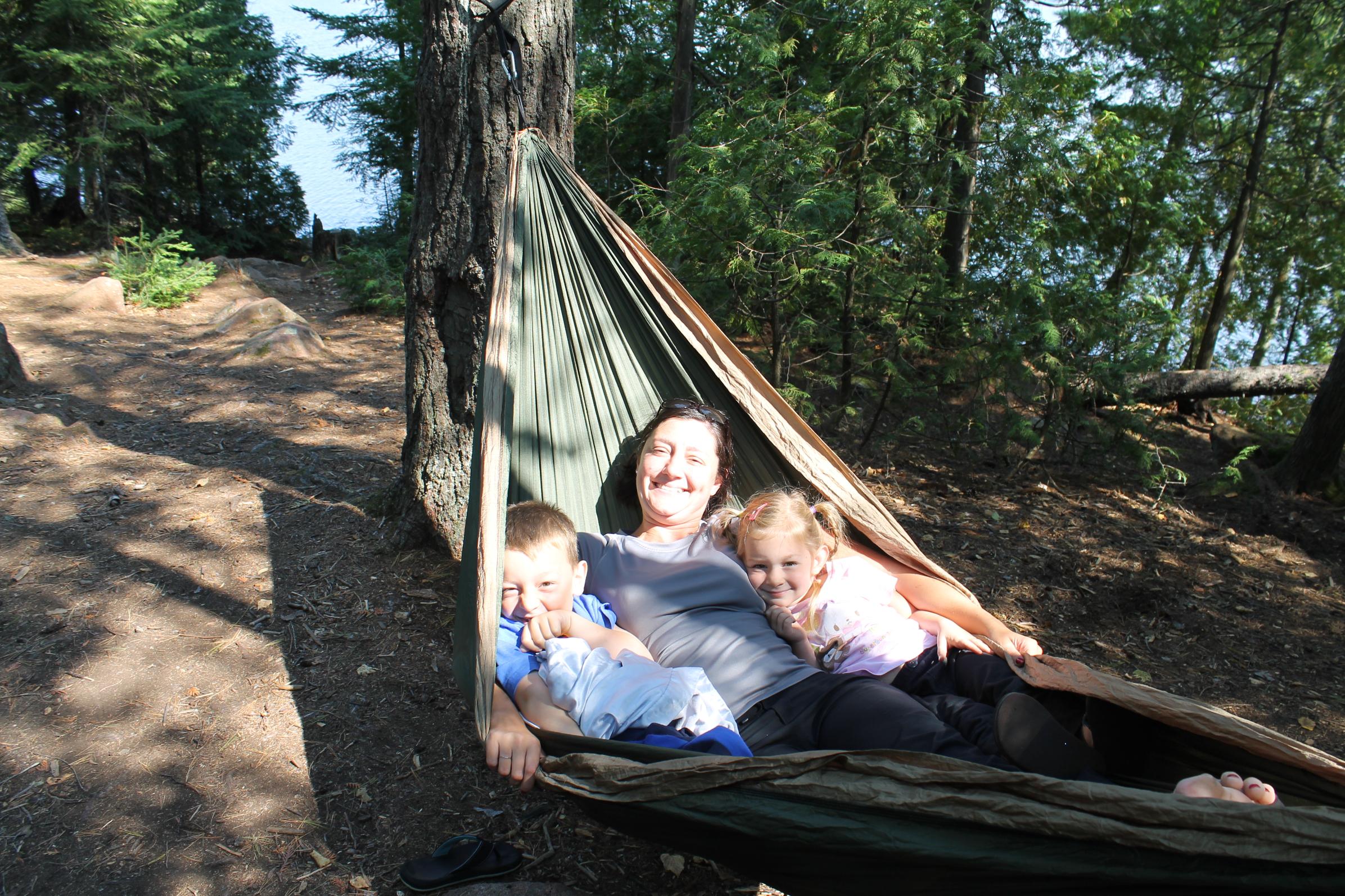 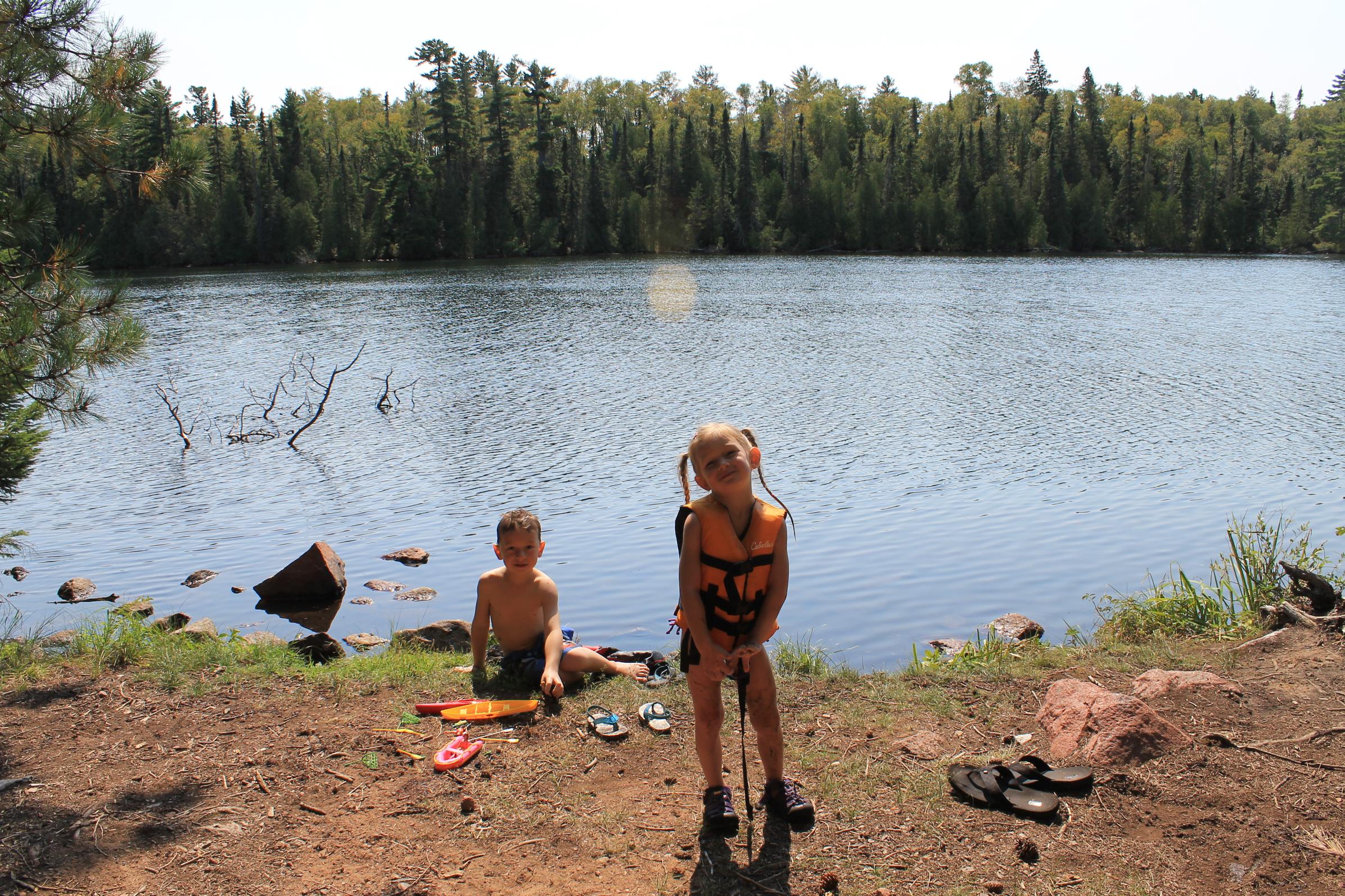 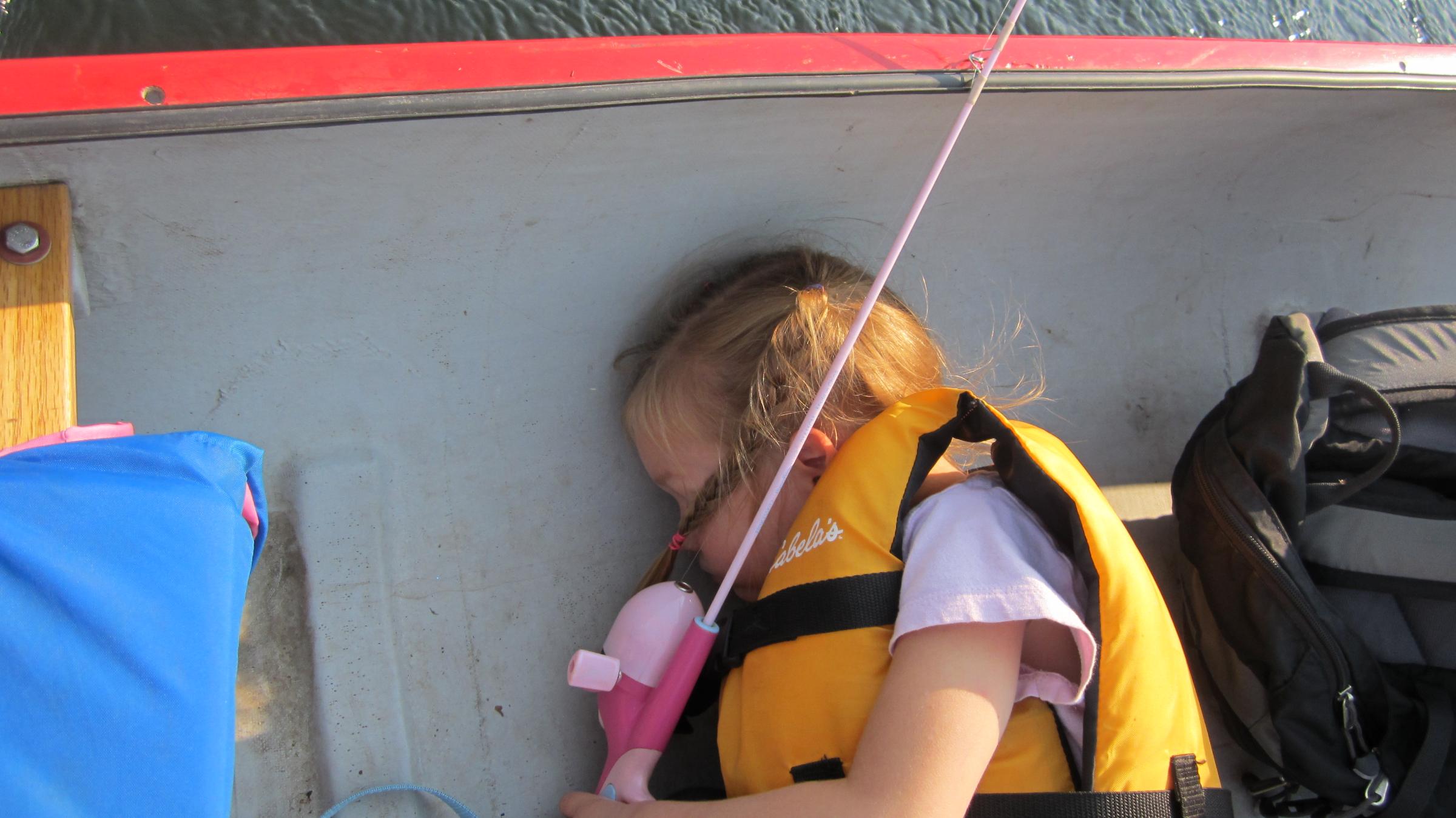 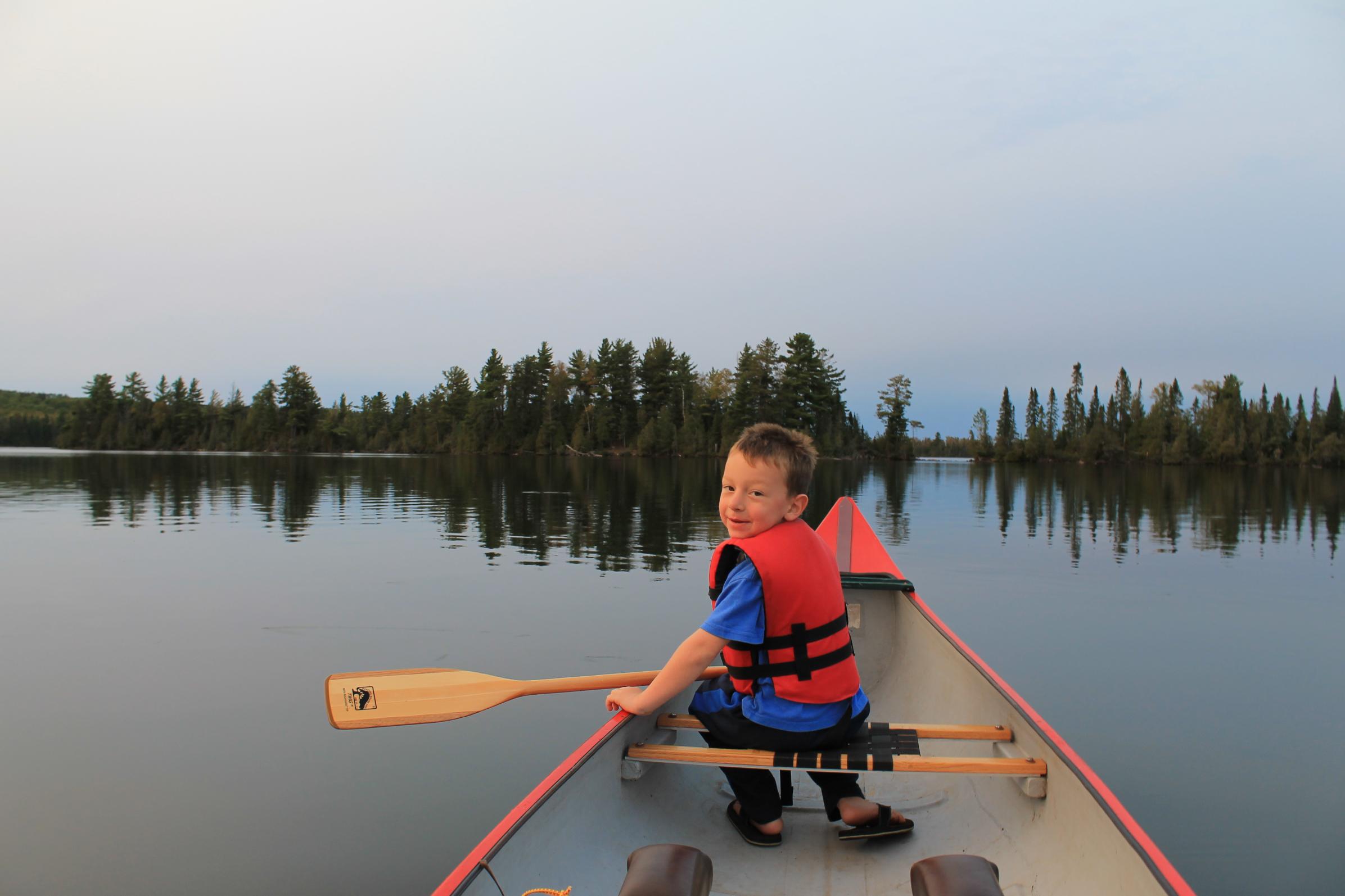 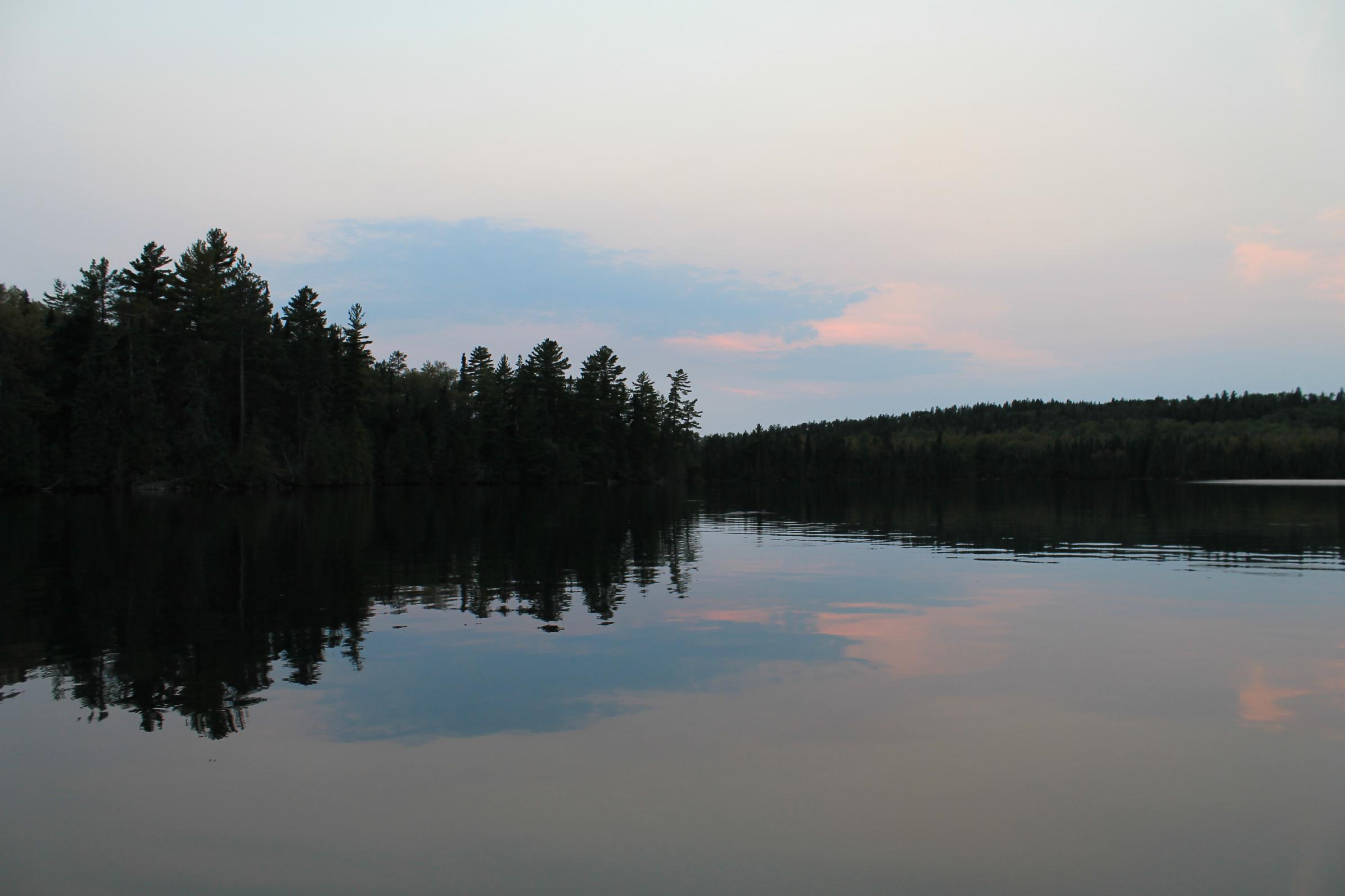 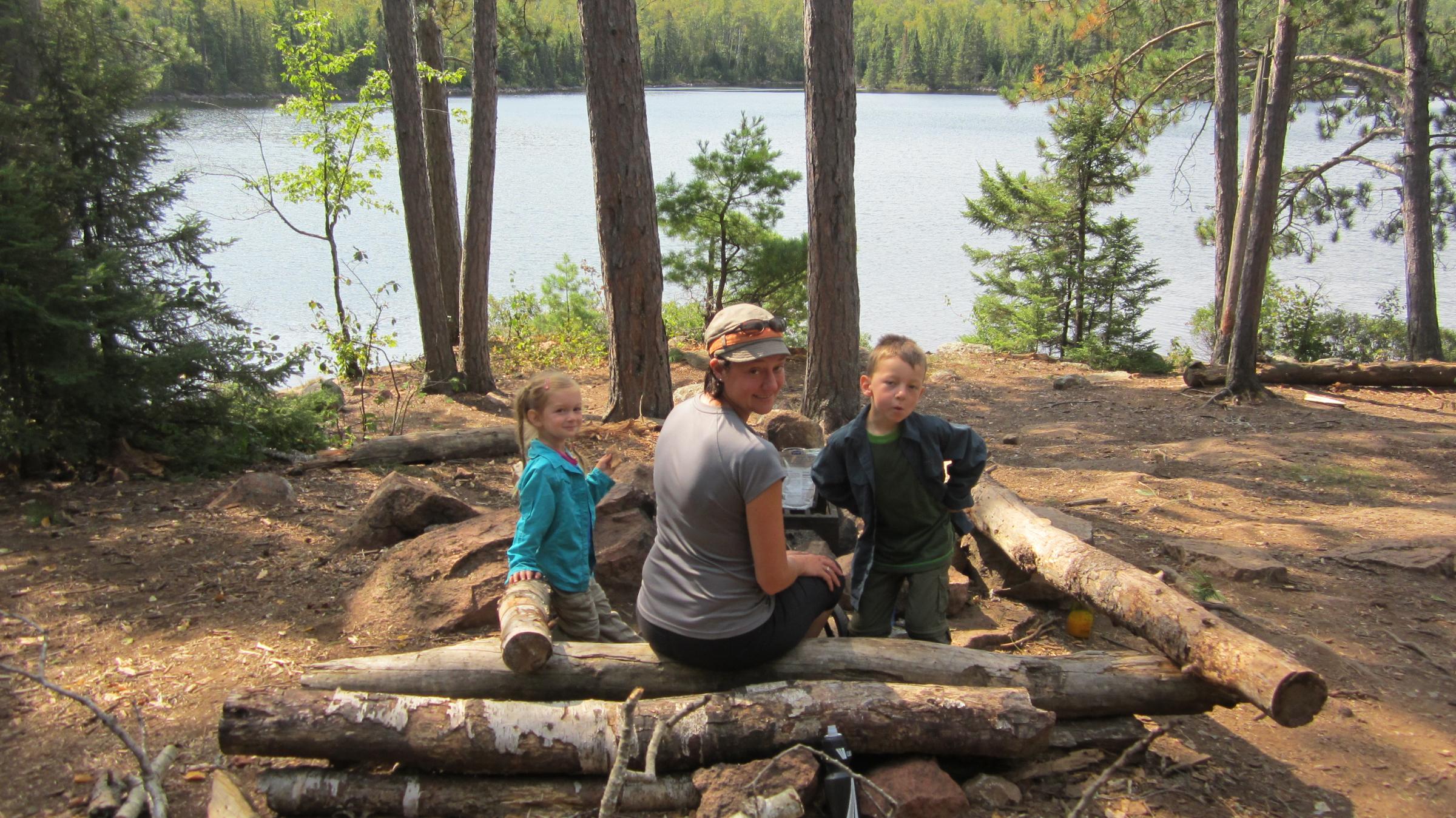 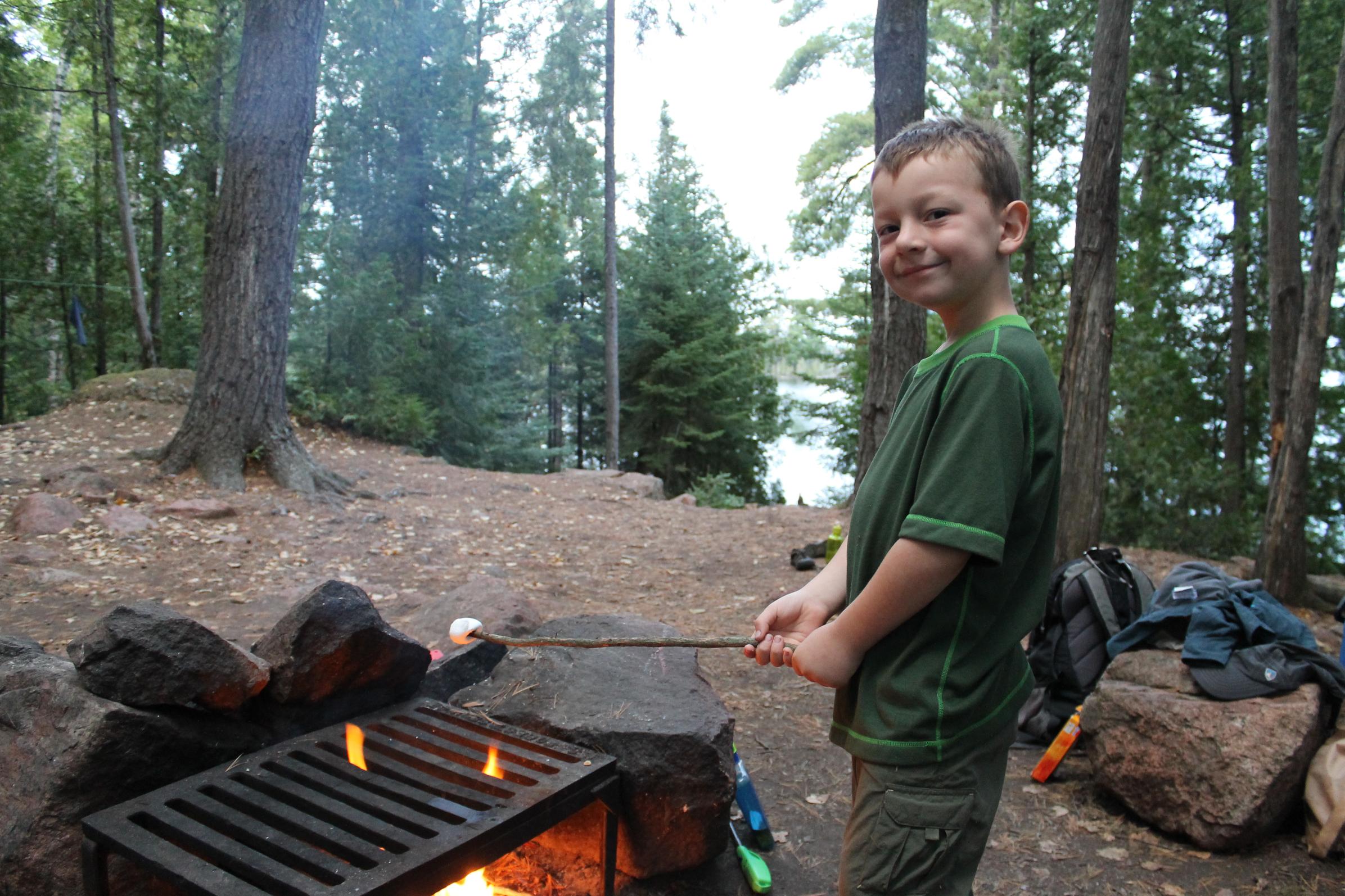 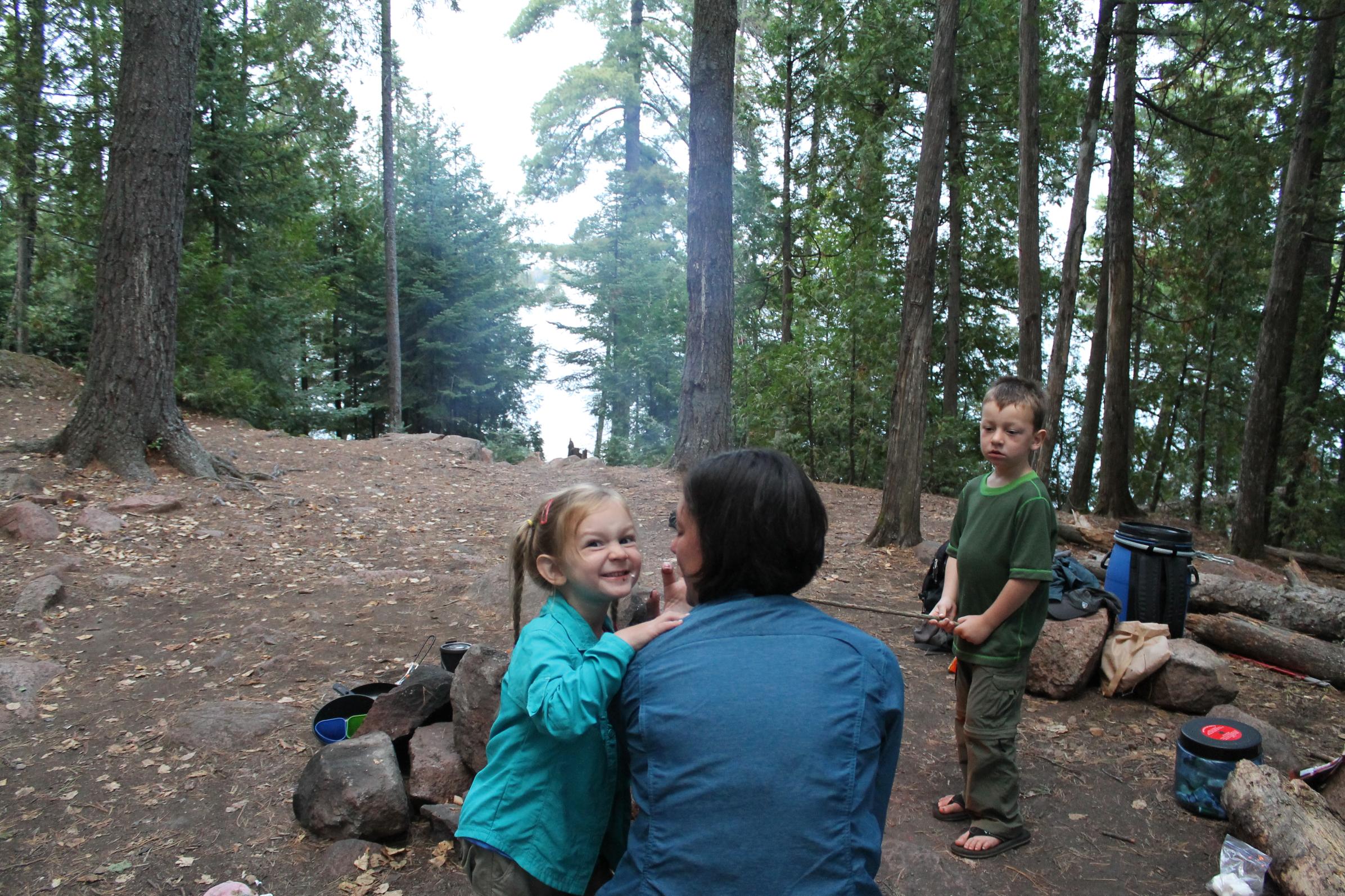 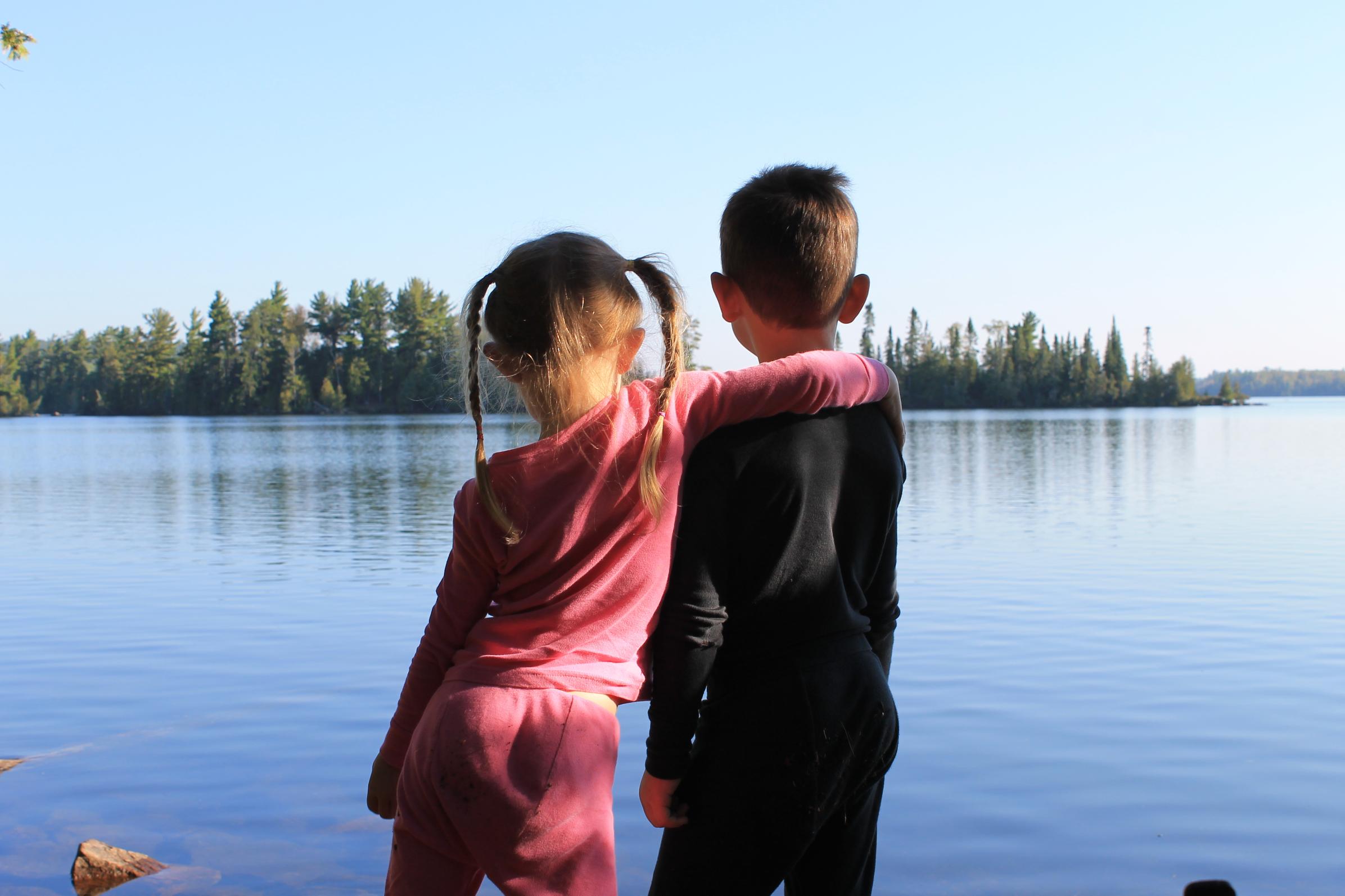 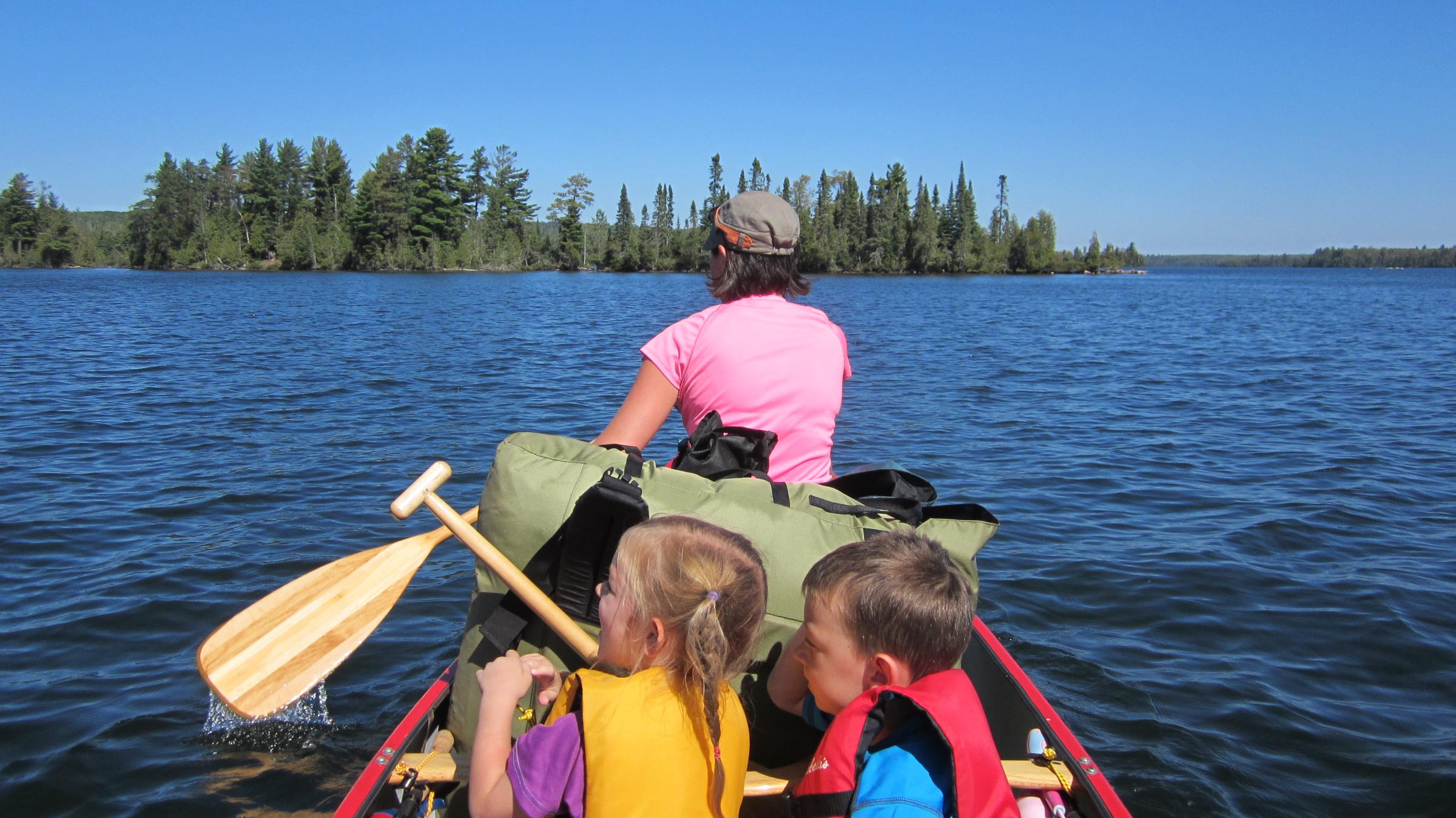 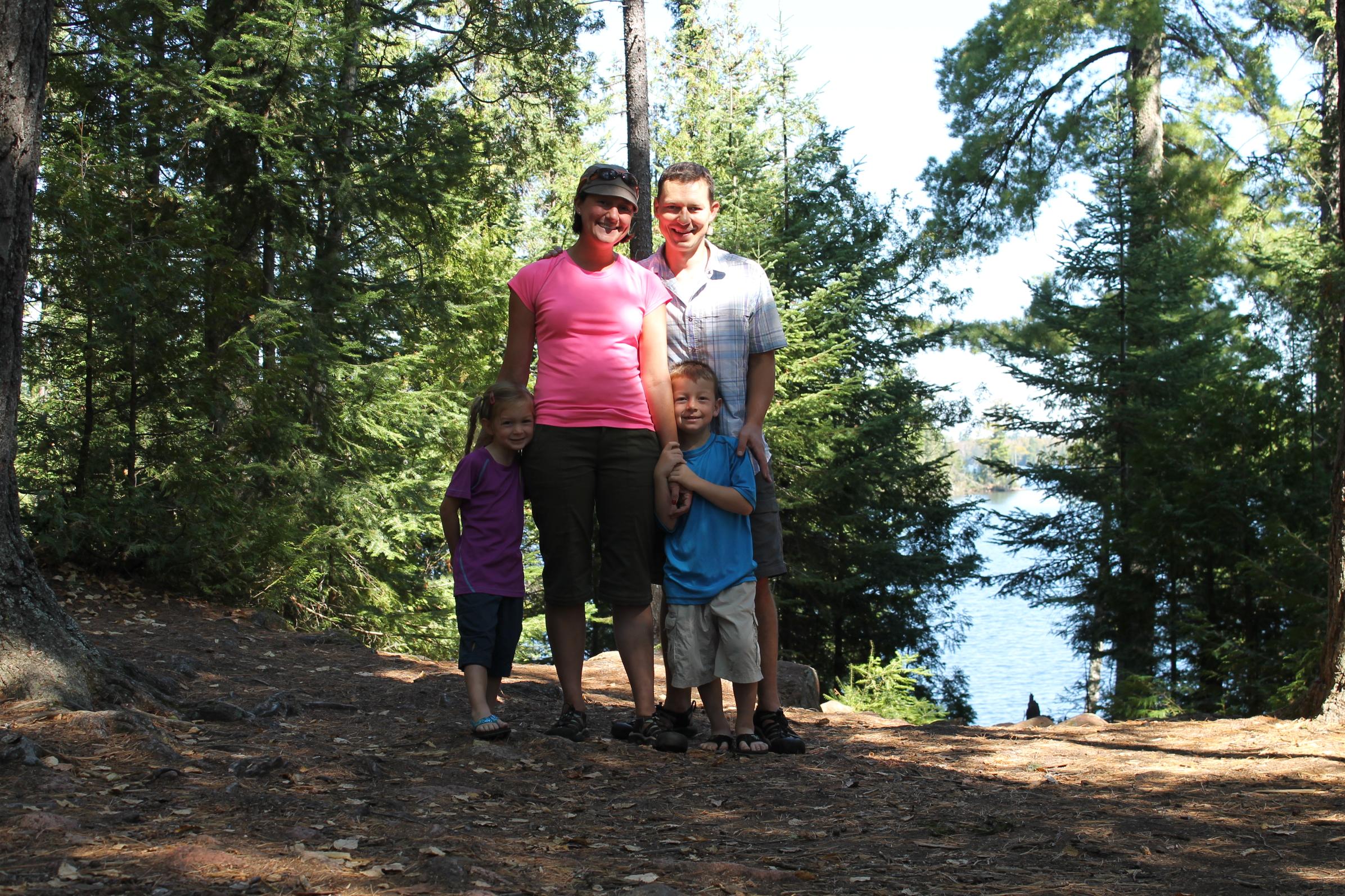