Tuesday, September 25th It was a frosty, foggy morning that would later become a partly sunny day with a high around 50 and light winds. I took my gear down and put it in the van while Mike scraped frost off the windshield. He shuttled me over to EP #50 and I was on the water about 8:15 AM. It was a very short paddle to the first portage, which was a decent little climb. 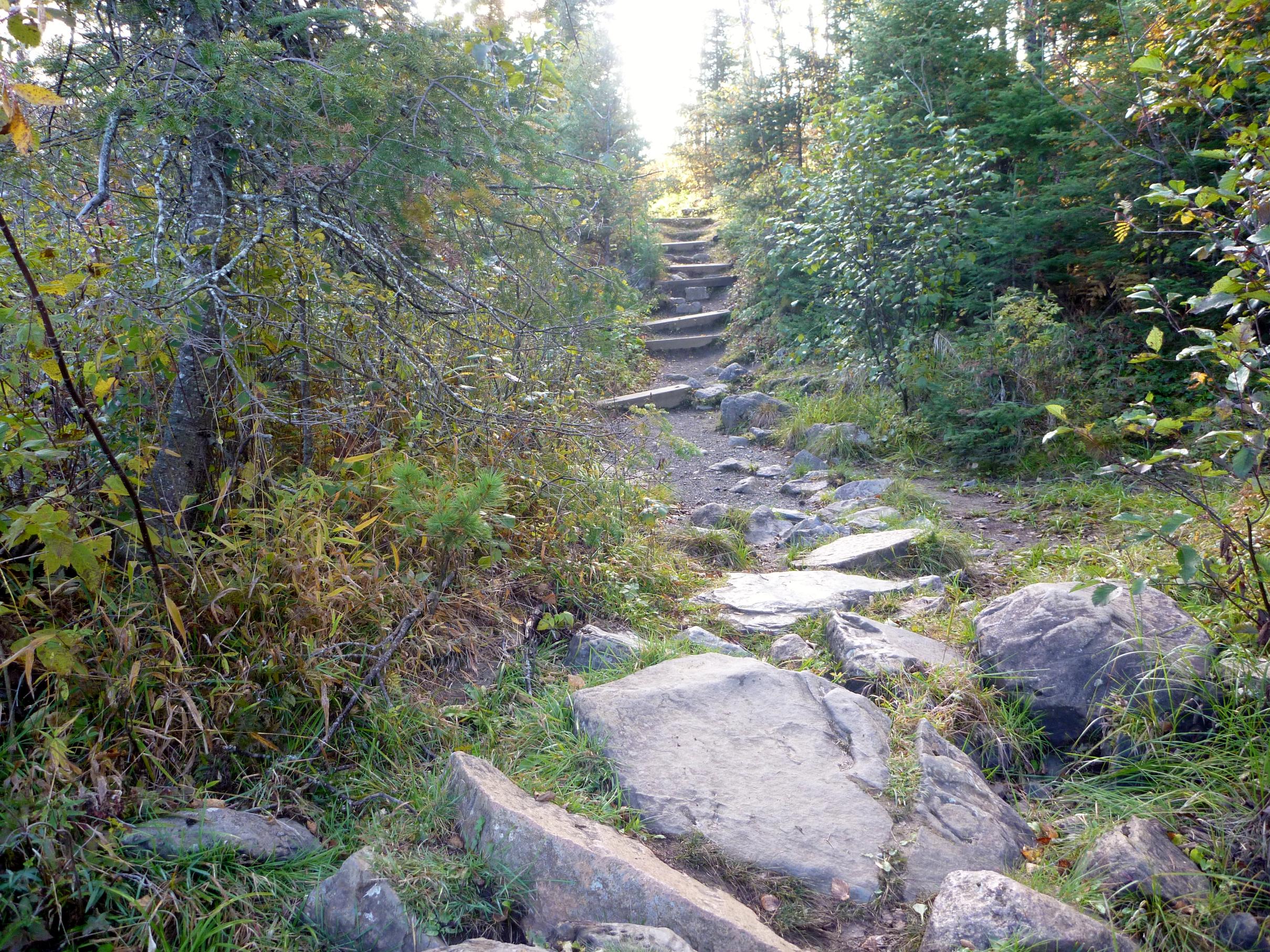 The portages today were not overly long or difficult, but there were a half-dozen of them. I found that it saved time and energy to unload the large pack and place it off to the side with the PFD and paddle, then put the yoke on the canoe, pick up the small pack from the canoe and put it on, then pick up the canoe and portage that across first. It avoided lifting things multiple times. 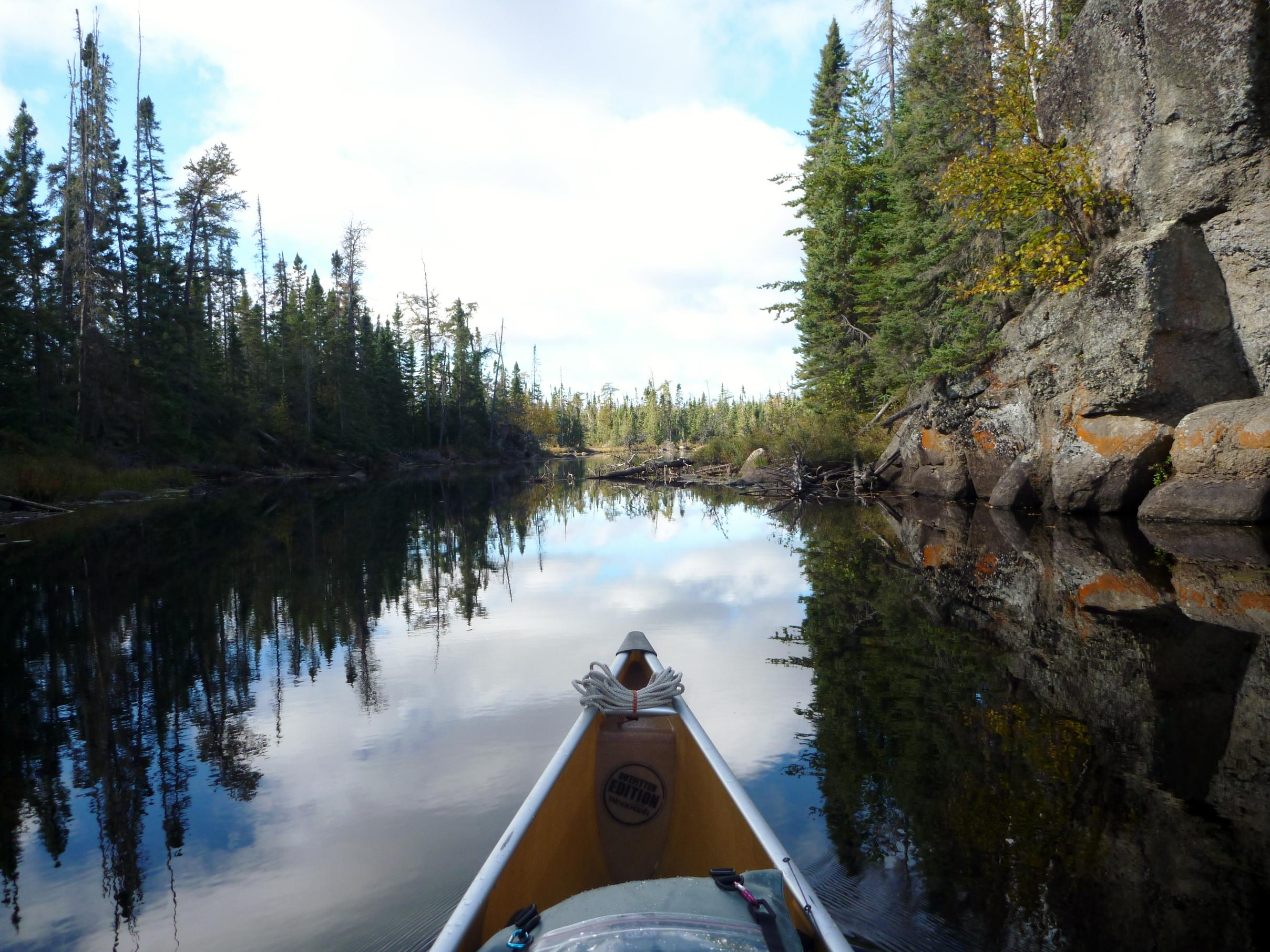 I did not see anyone until mid-morning, when I saw some campers on the NW site on Cross Bay Lake. They were the last people I saw until mid-morning Saturday on Omega Lake. I reached Karl Lake about 12:30 PM and stopped at the campsite there for some food and drink. It was a fairly nice site and I decided to stay there instead of taking the nearby portage to the northwest bay of Long Island Lake and one of the campsites there. It was another cold night. 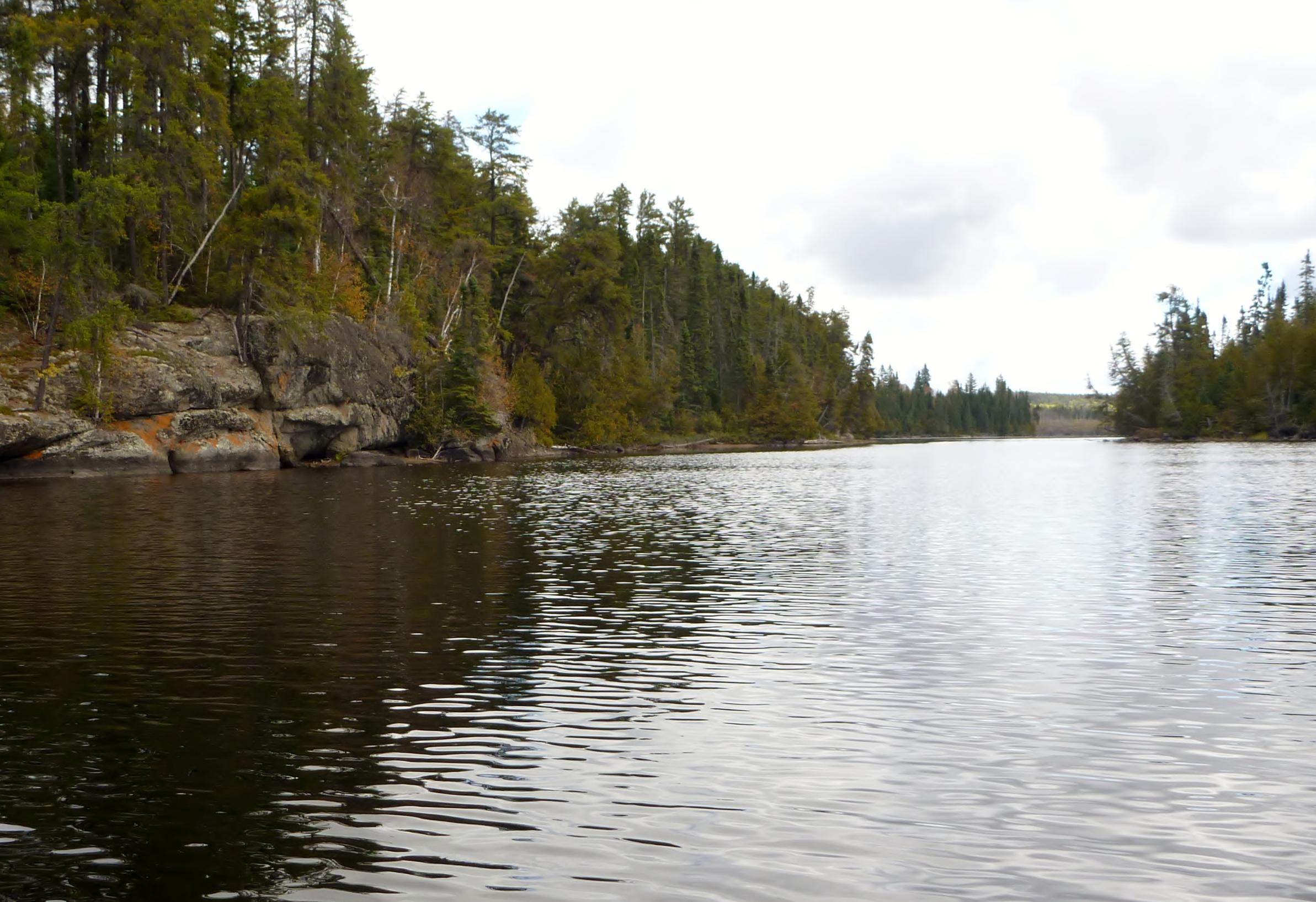 I rambled around Long Island for a while, paddling up Banadad Creek a ways before taking the campsite nearest the portage to Muskeg. I saw the only loon of the trip On Long Island Lake today. 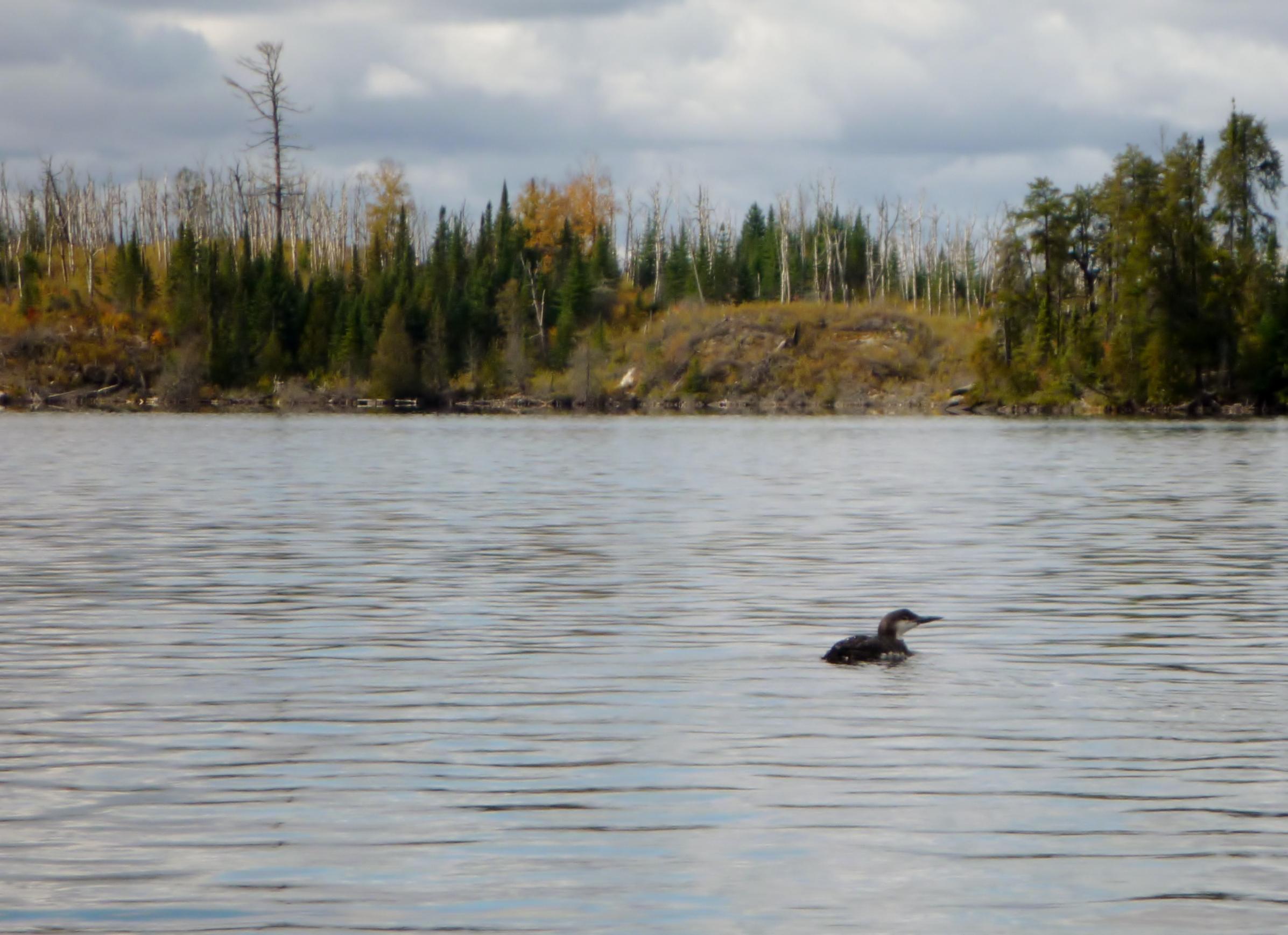 I knew tomorrow would be a long, hard day and I tried to organize things and pre-pack so I could get a quicker start in the morning. I prepared my drinks for tomorrow and left out enough water for coffee and breakfast in the morning, then packed away the water filter. Wednesday night was quite chilly - probably the coldest of the trip.

I stayed snug in my sleeping bag longer than I intended and arose to frost-covered gear and ice in my water. I eventually got packed and on the water. I made my way around the point into the bay where Muskeg Creek was located. As I paddled closer it was obvious the creek was impassable, but there was no sign of a portage. I paddled as far as I could and realized that was the portage - a jumble of large rocks, roots, and a downed tree. 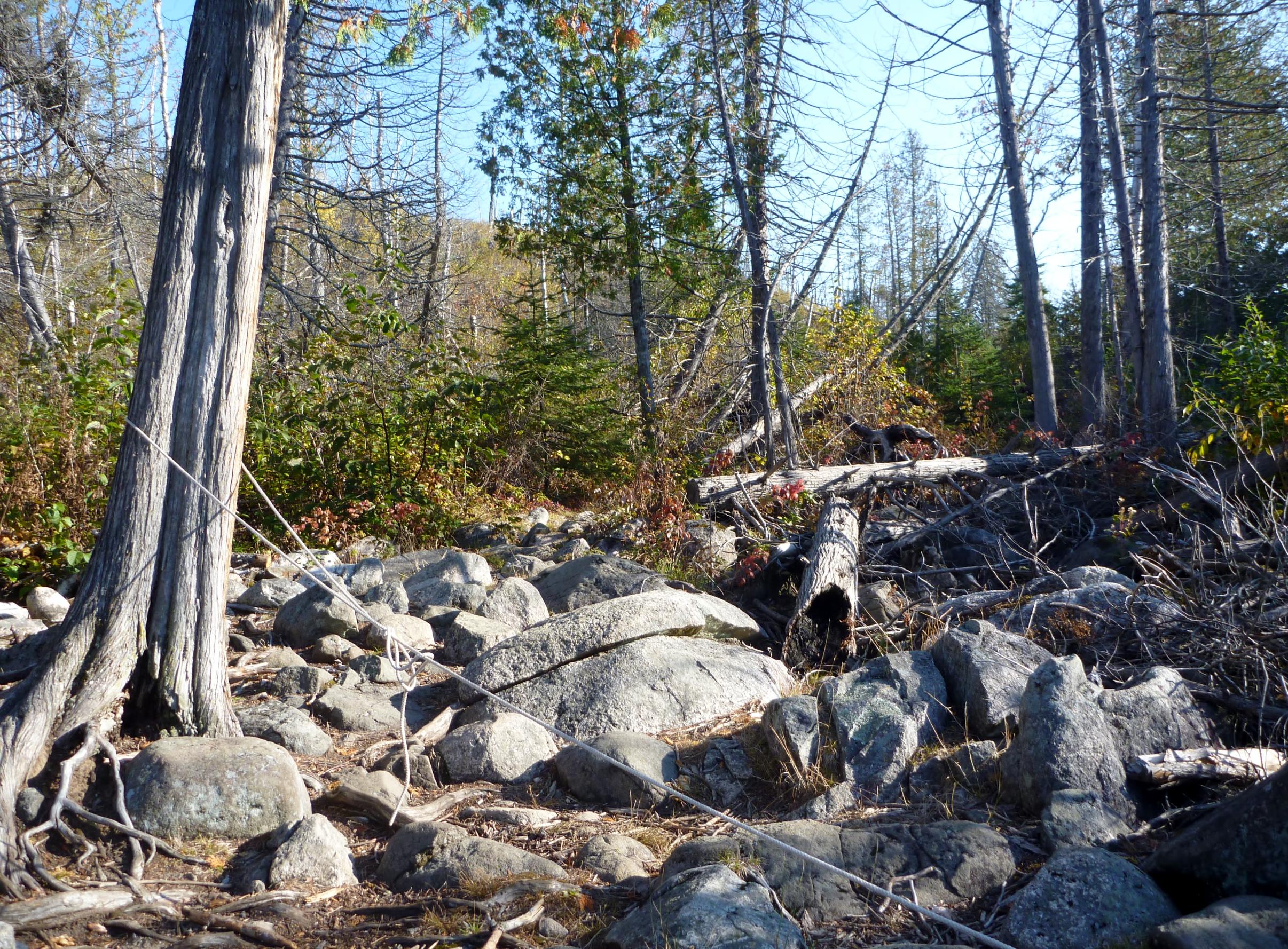 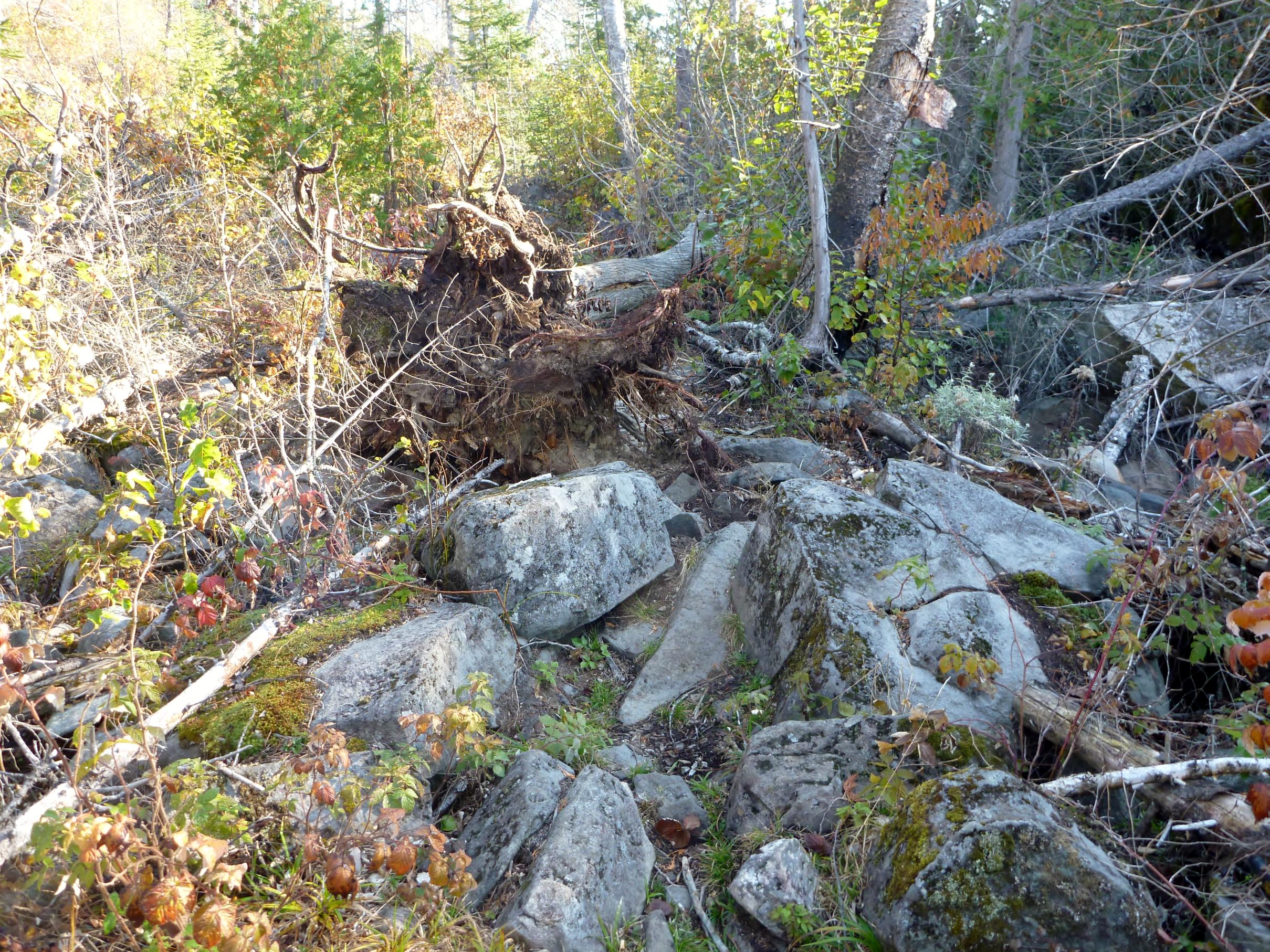 I methodically made my way across to the far end, which was flooded out by a beaver dam, necessitating a carry across the creek below and up onto the dam for a launch. 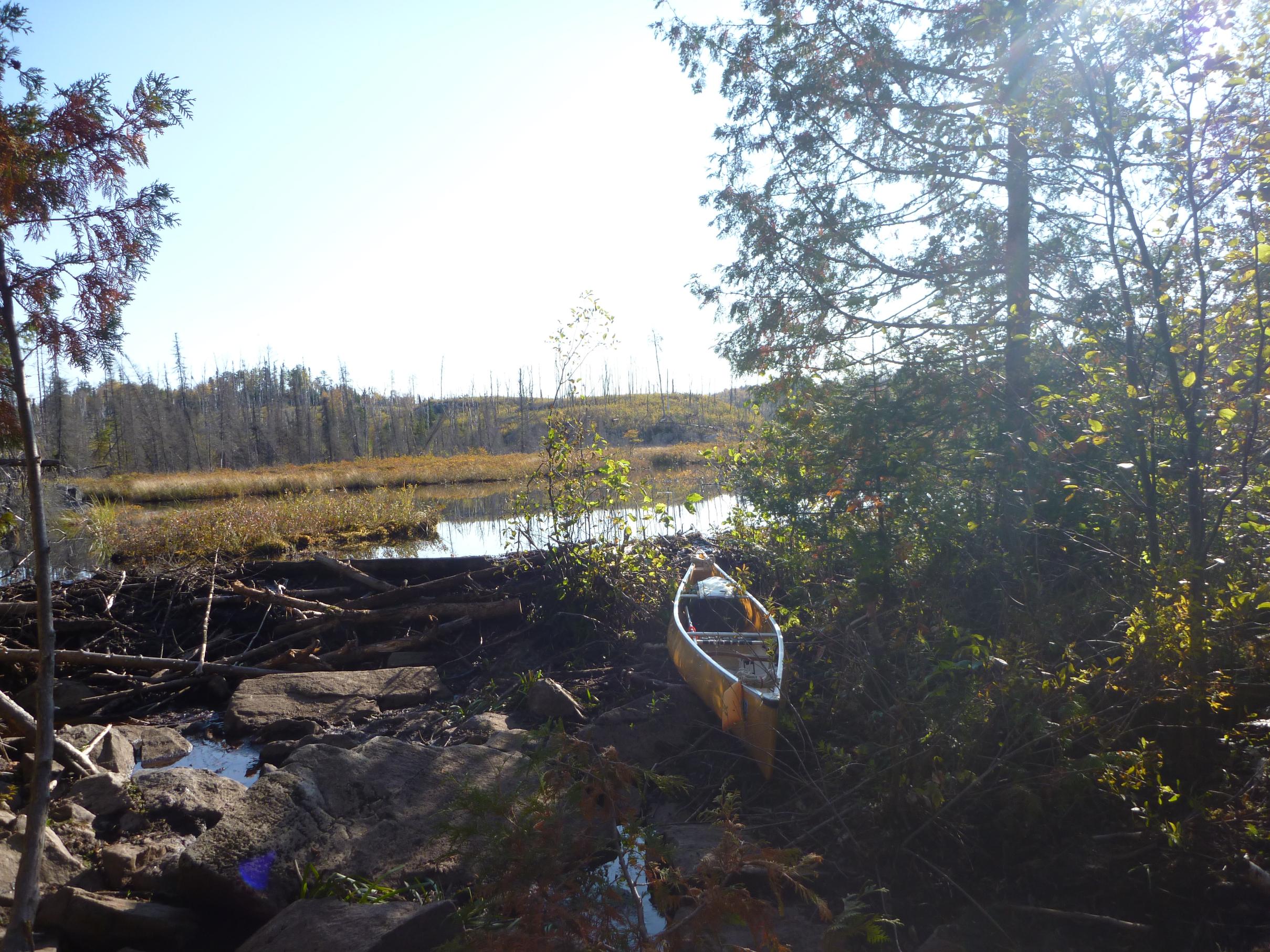 It wasn’t bad now, but would be worse in wet weather. I was rewarded with a cow moose sighting there in the beaver pond - only my second one in the BW. 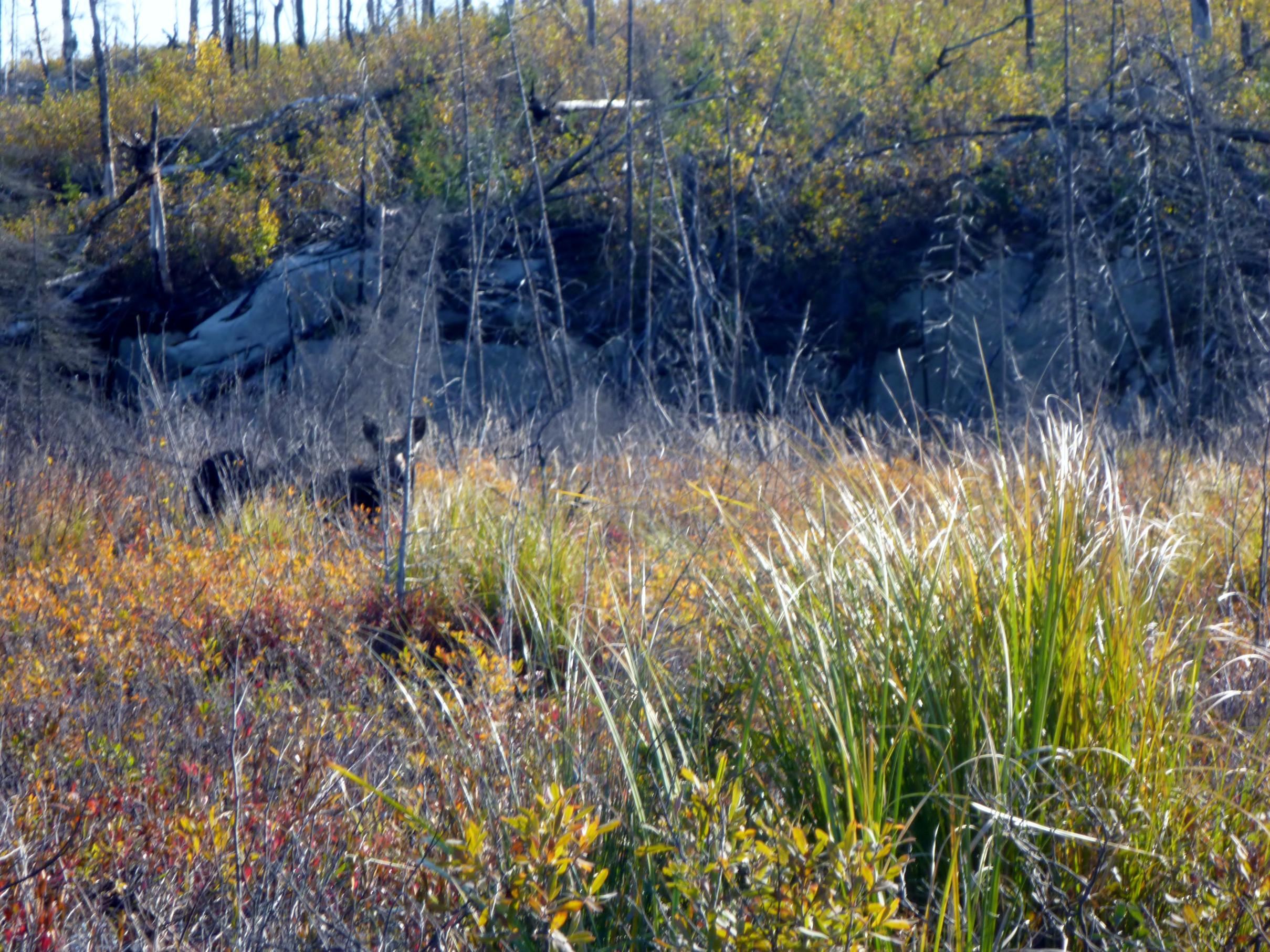 Another small beaver dam flooded out the last 4-rod portage on Muskeg Creek and only required an easy beaver dam pullover into Muskeg Lake. It was a short paddle to the Muskeg-Kiskadinna portage with the infamous "Wall". The portage is 195 rods and gains nearly 200 feet in elevation before dropping slightly to Kiskadinna. 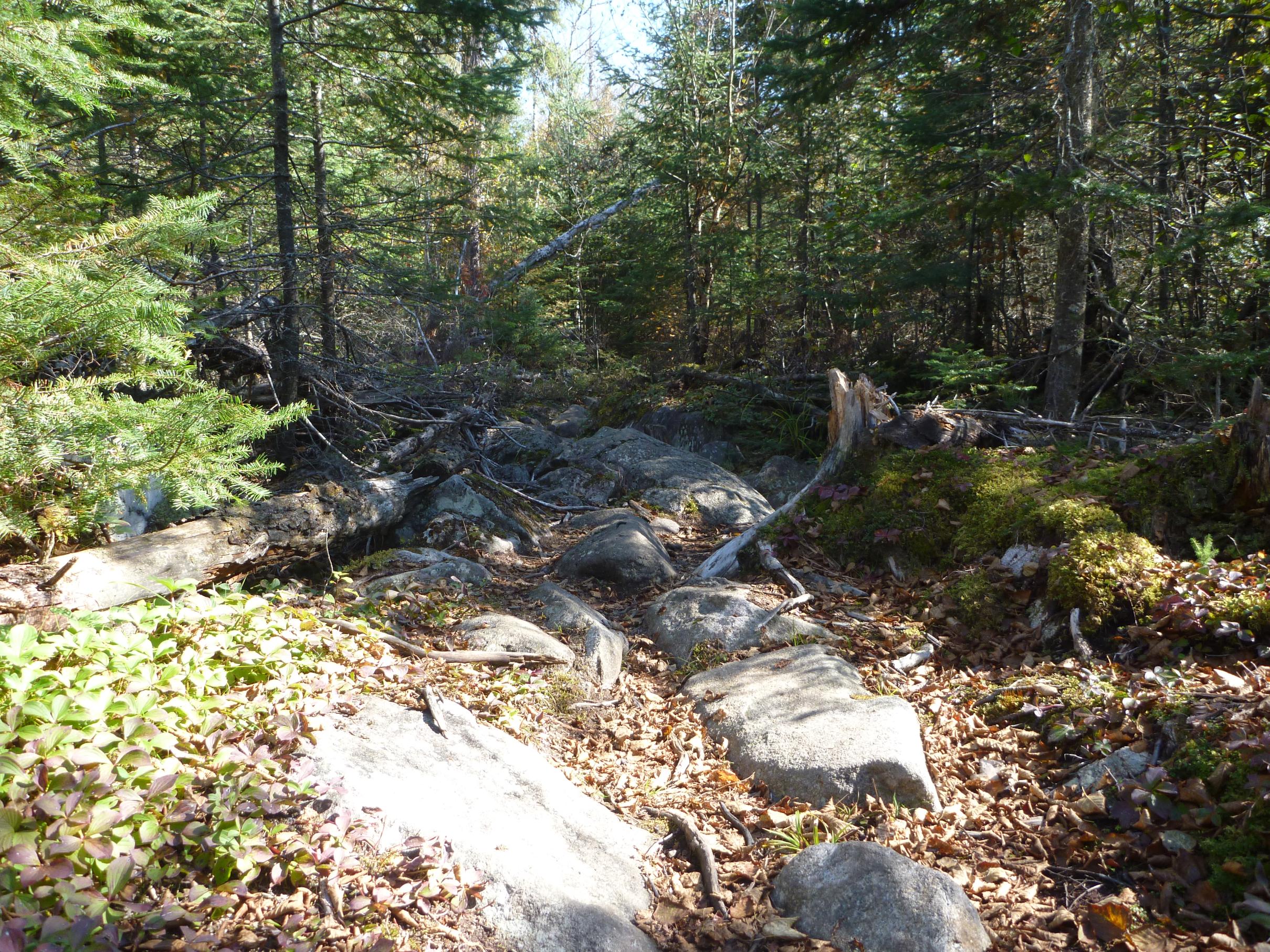 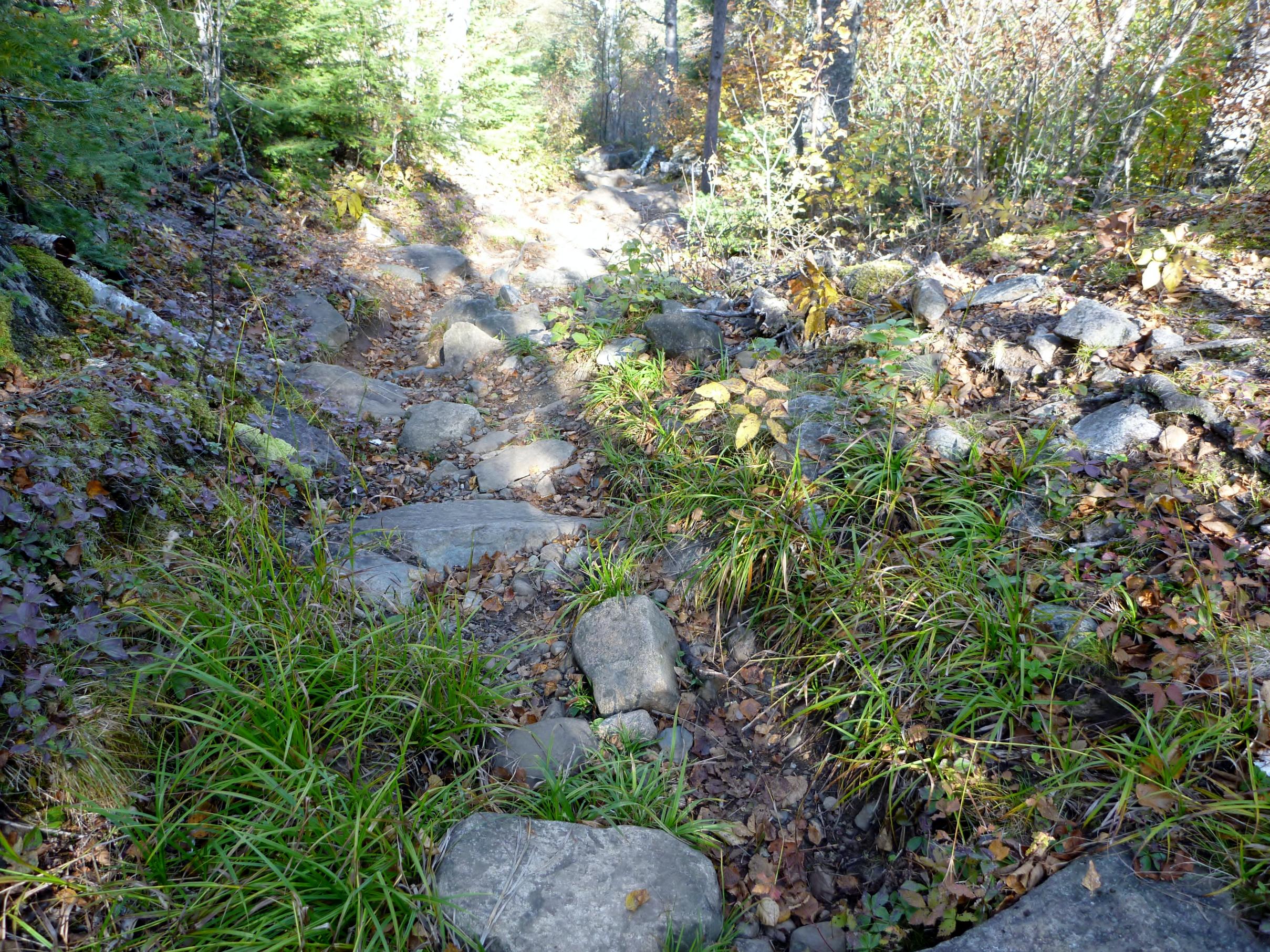 I walked a ways and then went up a fairly steep section, at which point I thought, "The "Wall" wasn't that bad". Then I came to the "Wall", a very steep and aptly named section of the portage. I put the canoe down, carried the pack up, across, and down the other side. 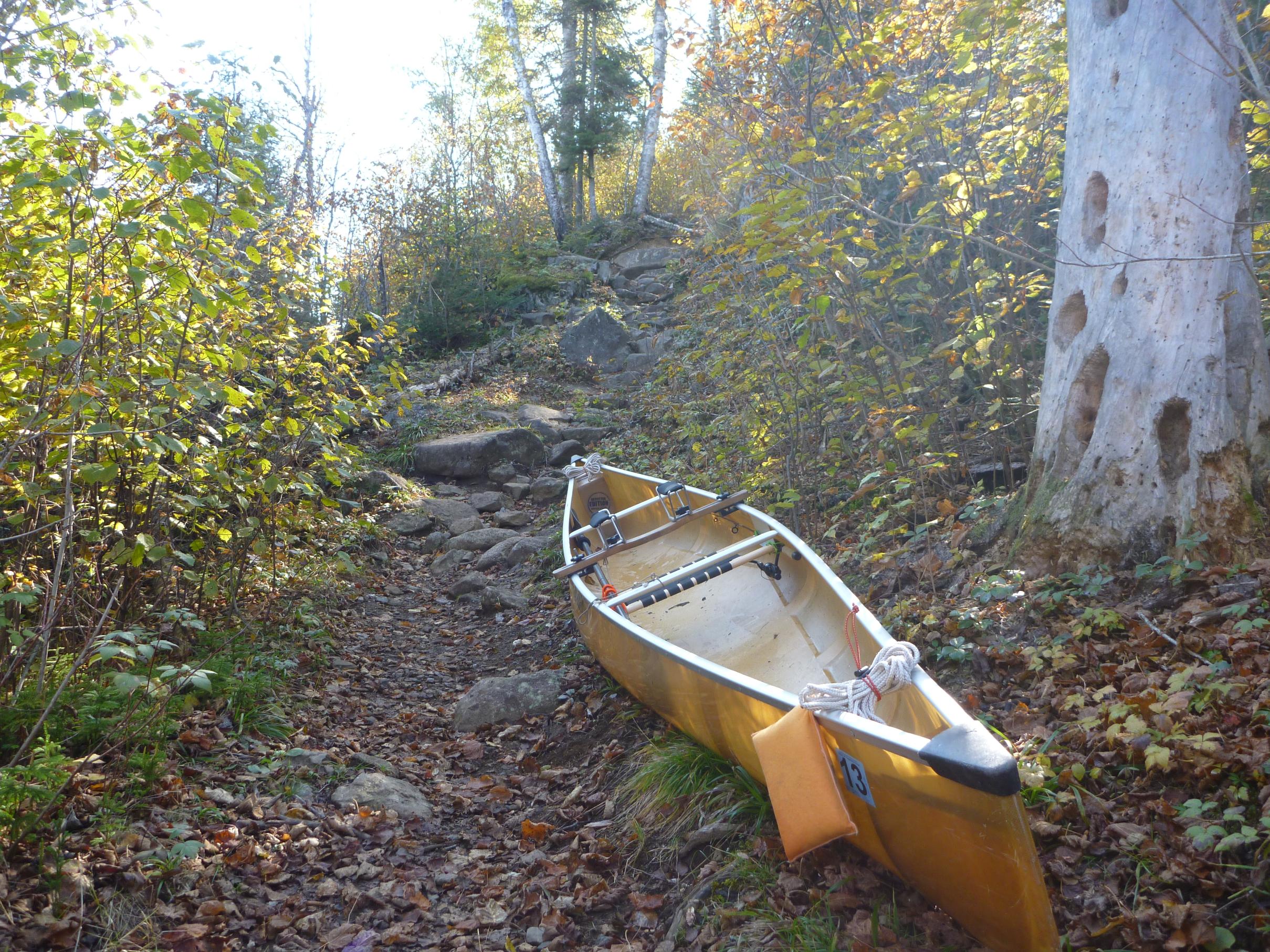 I returned for the canoe. I was tired now and I still had to get the large pack. It took me about 20 minutes to walk back to the beginning and 35 minutes to carry the large pack up and over the portage. I carefully picked my steps between the roots and rocks. Rest stops were frequent. The Muskeg to Kiskadinna portage was a killer.

I loaded the canoe and paddled down Kiskadinna, a long, narrow lake about two miles long with a rock cliff on the south shore. At least I had a tailwind. I stopped at the last campsite, had some water and food. I was very tired at this point, but decided to move on since it wasn't a nice site and I really wanted to be on Omega for the next couple of days. The portage was located near the east end of the lake a short paddle away and was only 35 rods. How bad could it be? It didn't look bad on the map.

I headed for the low area and the portage at the eastern end only to discover that it started at the base of the cliff on the other side and ran steeply up alongside it on a narrow, rocky path before descending steeply on the other side. 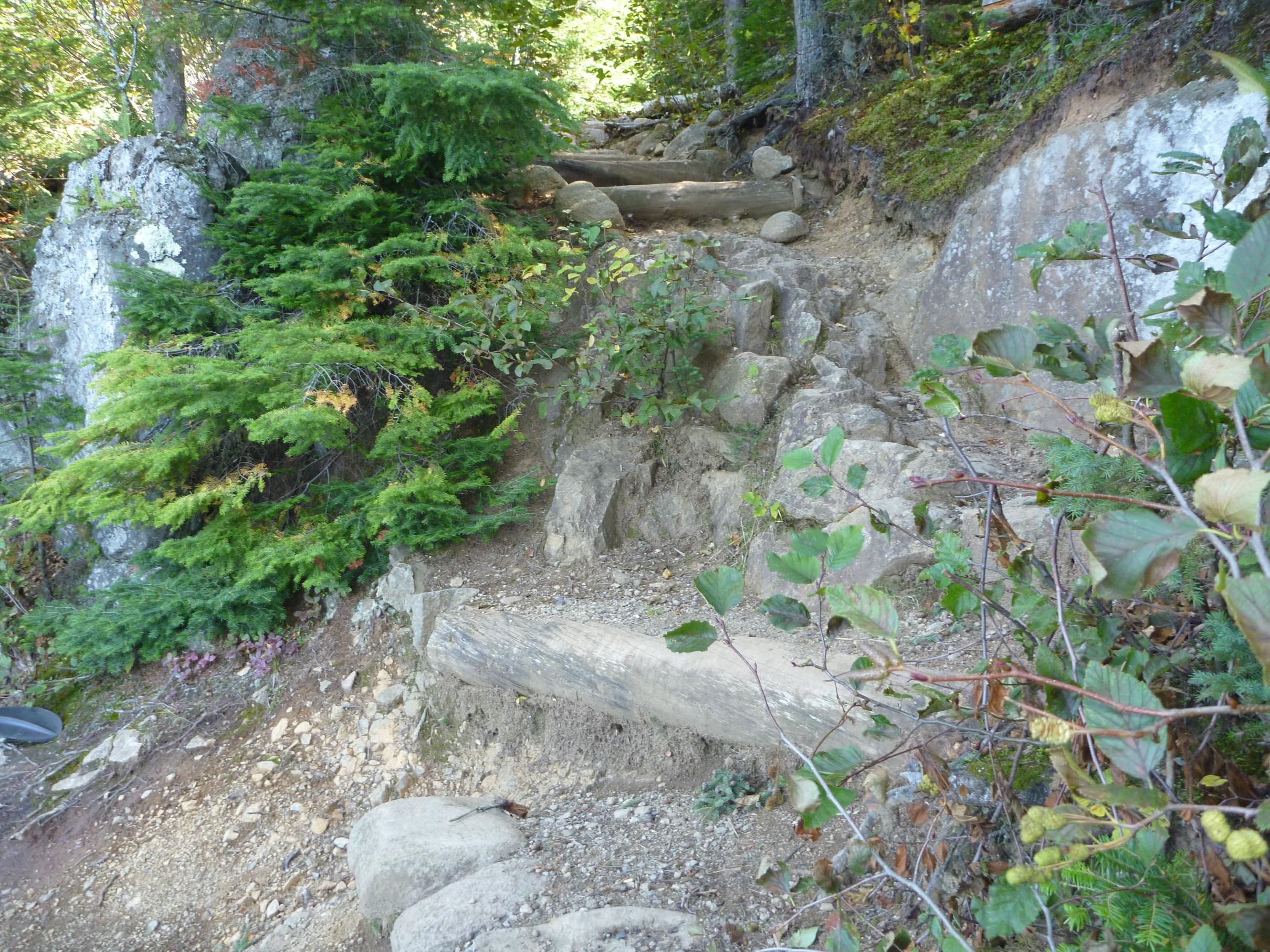 That was the last straw. I was exhausted when I finished the portage. The first campsite was open and I took it. I wanted to take a nap, but I was afraid I wouldn't wake up until after midnight. I still had all the camp chores to do. I filtered water and made coffee. Then I set up camp. When I was done, I made a second cup of coffee, sat down on the rock by the lake, and took off my boots and socks.

I stayed 2 nights on Omega. Omega is a beautiful lake. 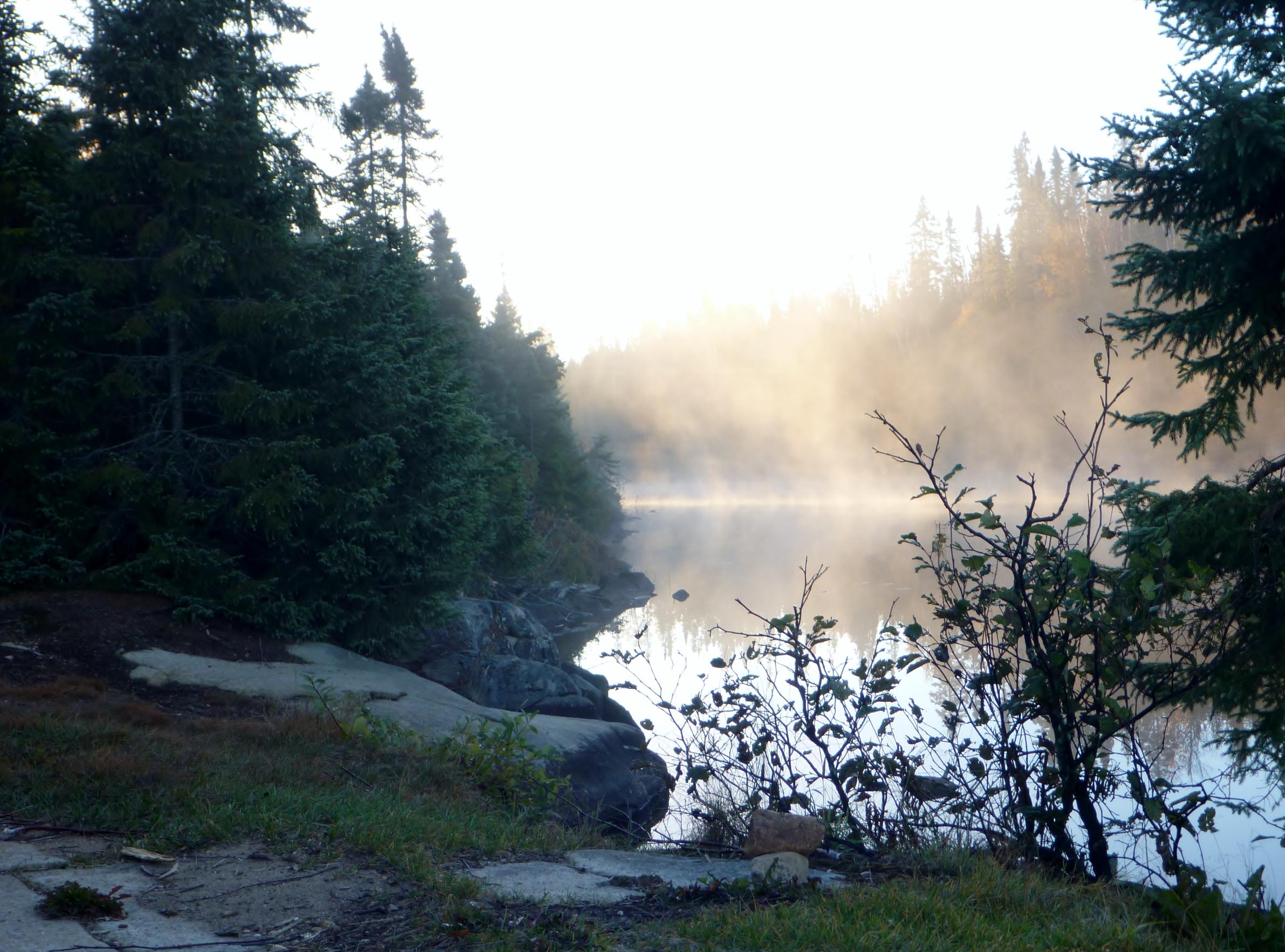 I circumnavigated Omega Lake. It's a beautiful lake with long arms and bays, rock cliffs and outcrops, and a large island in the middle. 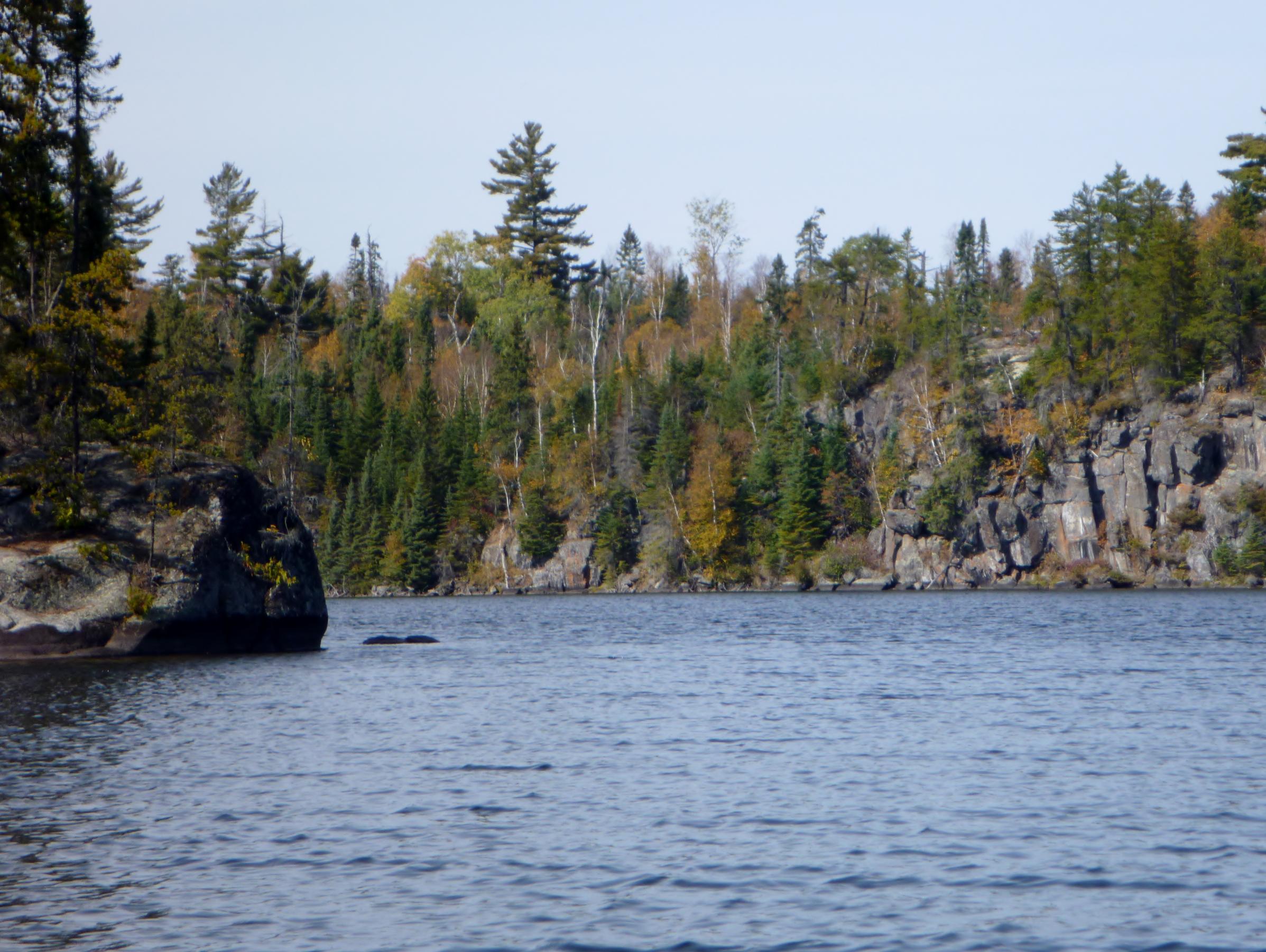 I paddled along the shoreline, in and out of each bay, and every nook and cranny. I stopped at the northern campsite there for some lunch. It sits high atop a rock with a nice view.

I did not see the portage to Phalanx Lake, which I had considered as a day trip, but did not get out and look for it. I was still tired from yesterday. At any rate, it was not obvious from the water. It is probably little used and perhaps obscured behind some of the deadfall in that area. Saturday, September 29th:

Saturday I paddled down Omega to Henson, and on to Pillsberry, where I saw three moose hunters with a moose. When I reached the portage to Allen, they were paddling down the lake behind me. I set my large pack, PFD, and paddles off to the side well out of their way and started across the portage with my canoe and pack. Almost immediately I was confronted by a large tree which had fallen across the portage. 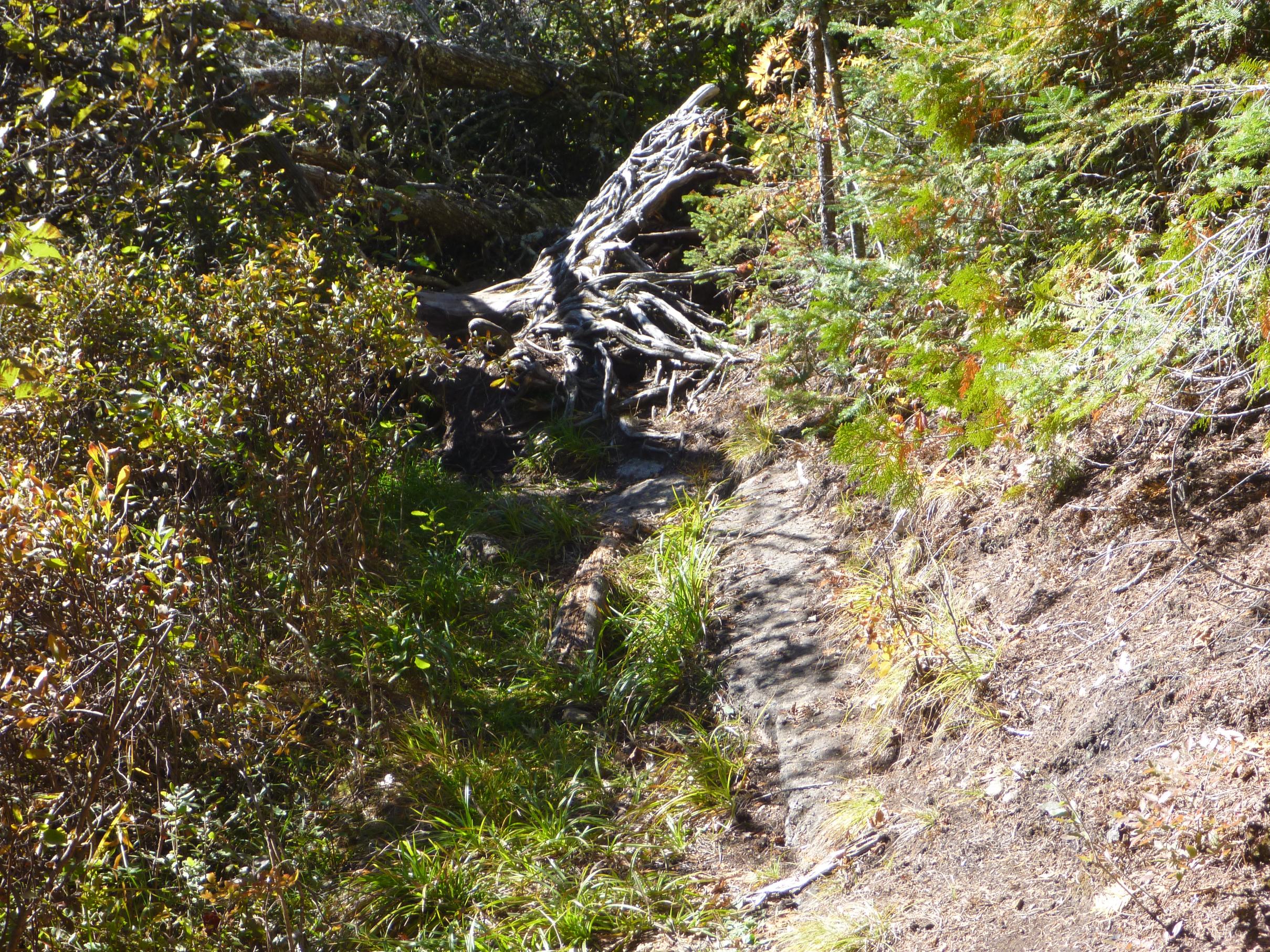 There was no way around it and it was too large and too high to step over. I couldn't go under it either. I basically had to half-climb, half-crawl over and through the roots and base of the tree with a pack and canoe on my back. It was very awkward.

Otherwise, the trail was level, although it was filled with roots and rocks. On the way back for my second load I passed the three moose hunters sweating as they carried moose parts across the portage. They had a tough day ahead of them. I paddled on towards Allen Lake. 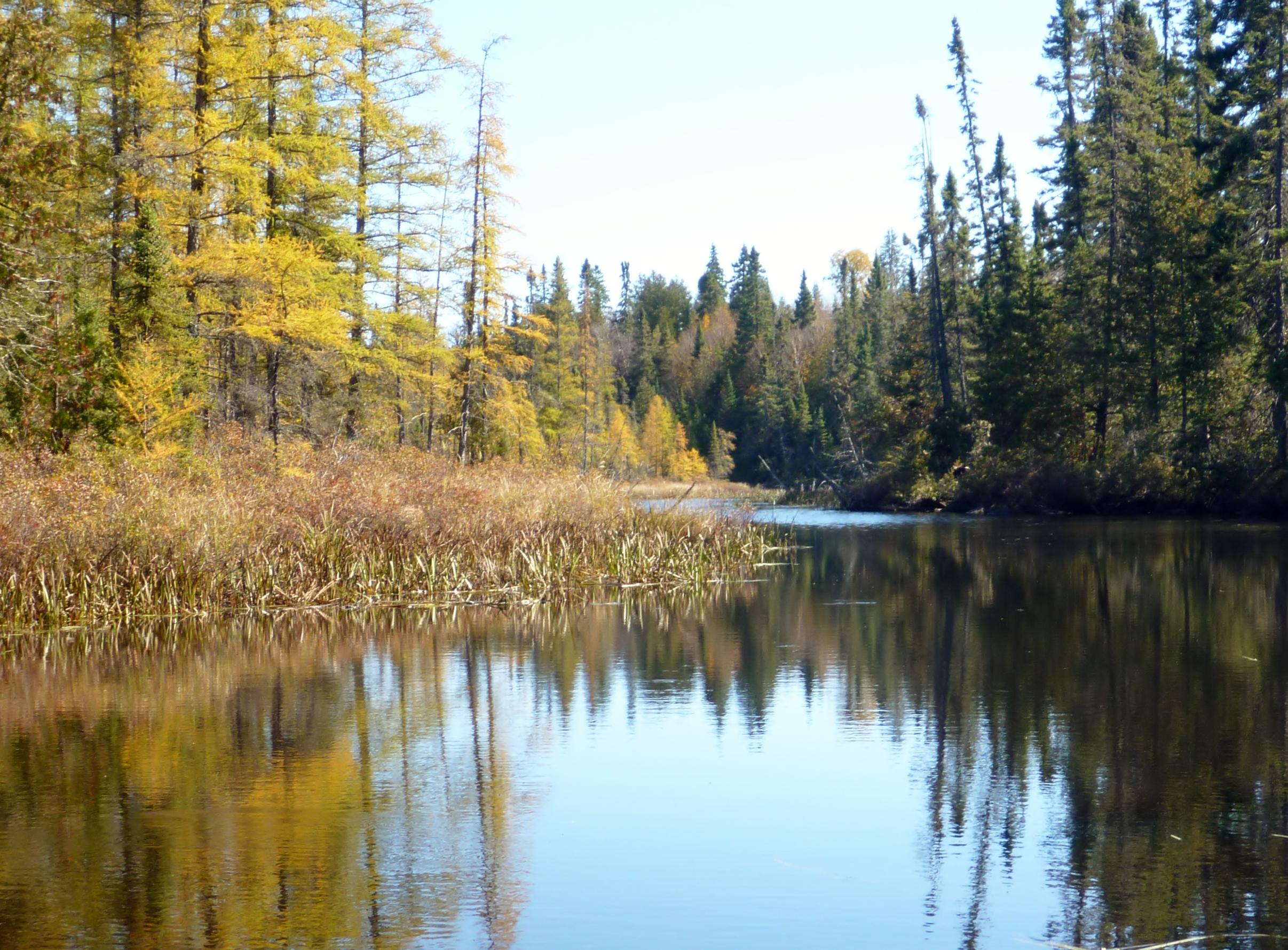 I took the campsite on Allen for the night with plans to leisurely make my way to Horseshoe tomorrow for the last two nights. I figured if I got there around noon, people would be leaving after the weekend and others would arrive a little later, so it should be relatively easy to find a campsite.

I took my time getting to Horseshoe since I didn't have far to go. I paddled onto Horseshoe and stopped at the first campsite on the point across the portage to Caribou. 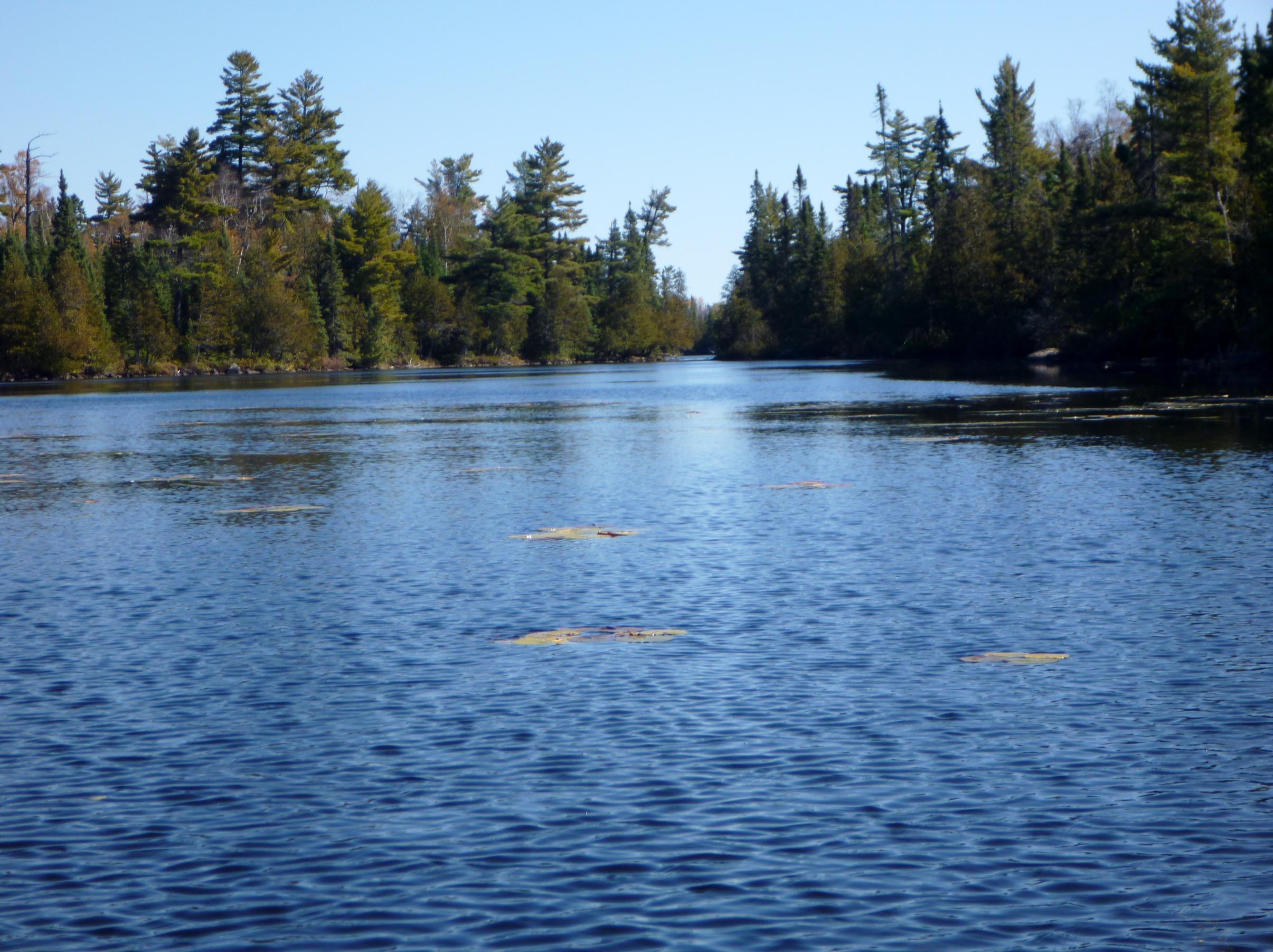 It was a nice site and I claimed it for my final 2 nights. The site is well up off the water above a large granite outcrop and the tent site I chose was up in the trees well back of the fire grate area. Horseshoe Lake was quite busy compared to the rest of my route, but the traffic diminished mid-afternoon Sunday. A few groups paddled by on their way in and out. Horseshoe is a beautiful lake and I spent some time paddling it, although it was limited a little by the wind in the afternoon. 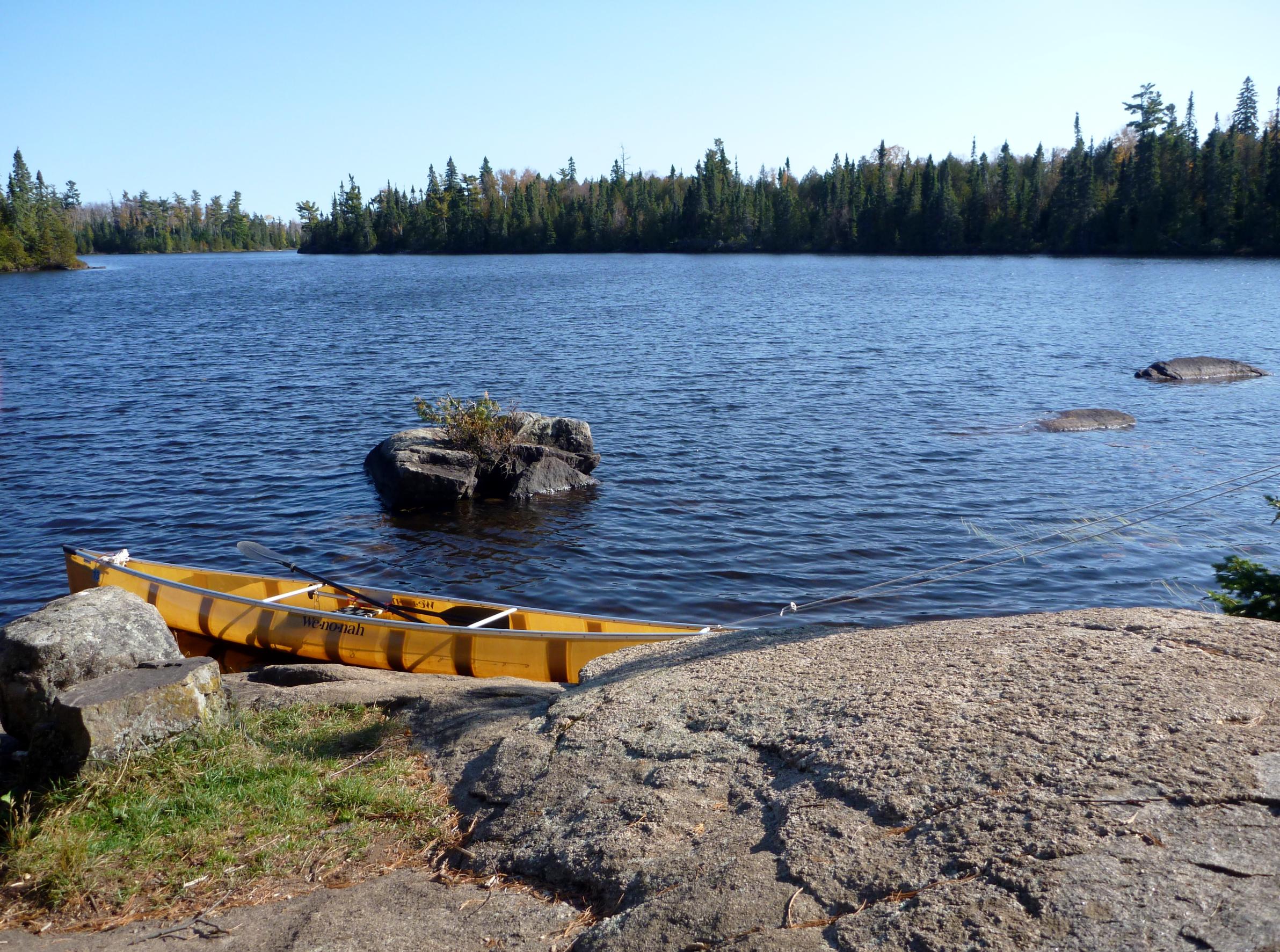 The birch and aspen leaves were almost all golden now, as well as the tamaracks. It was very beautiful. I didn't get to see all of Horseshoe that I wanted, but I did see the golden tamaracks and a lot of bald eagles. I'm going to have to get back to Horseshoe and Omega Lakes. 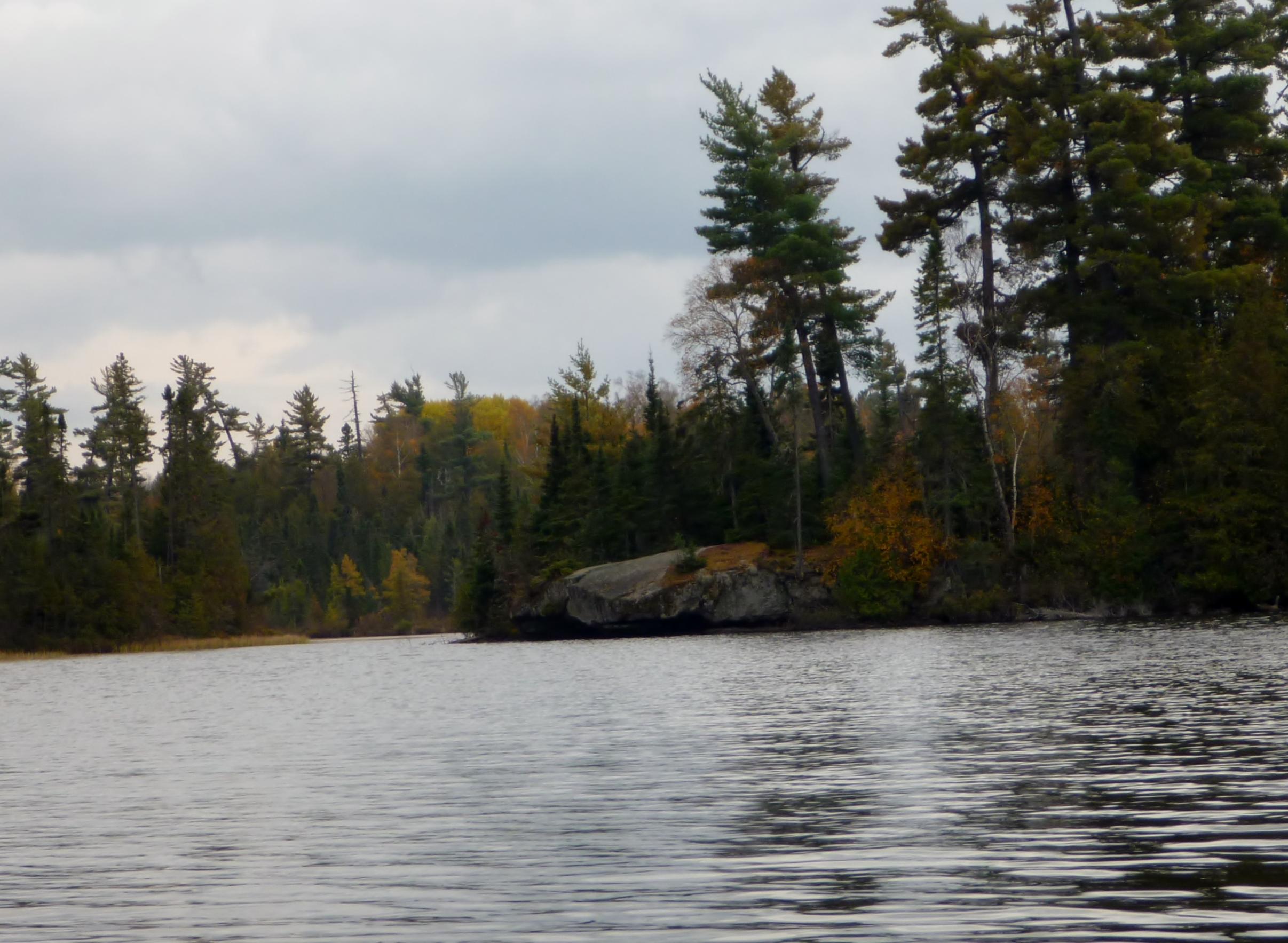 It was a cool, cloudy, windy morning and I paddled around Horseshoe until around noon when gustier winds made paddling the unloaded Prism awkward at times. I checked out the little pond just east of Horseshoe. Bear Bait’s autumn 2011 pictures of the golden tamaracks there were the genesis of my visit to Horseshoe. 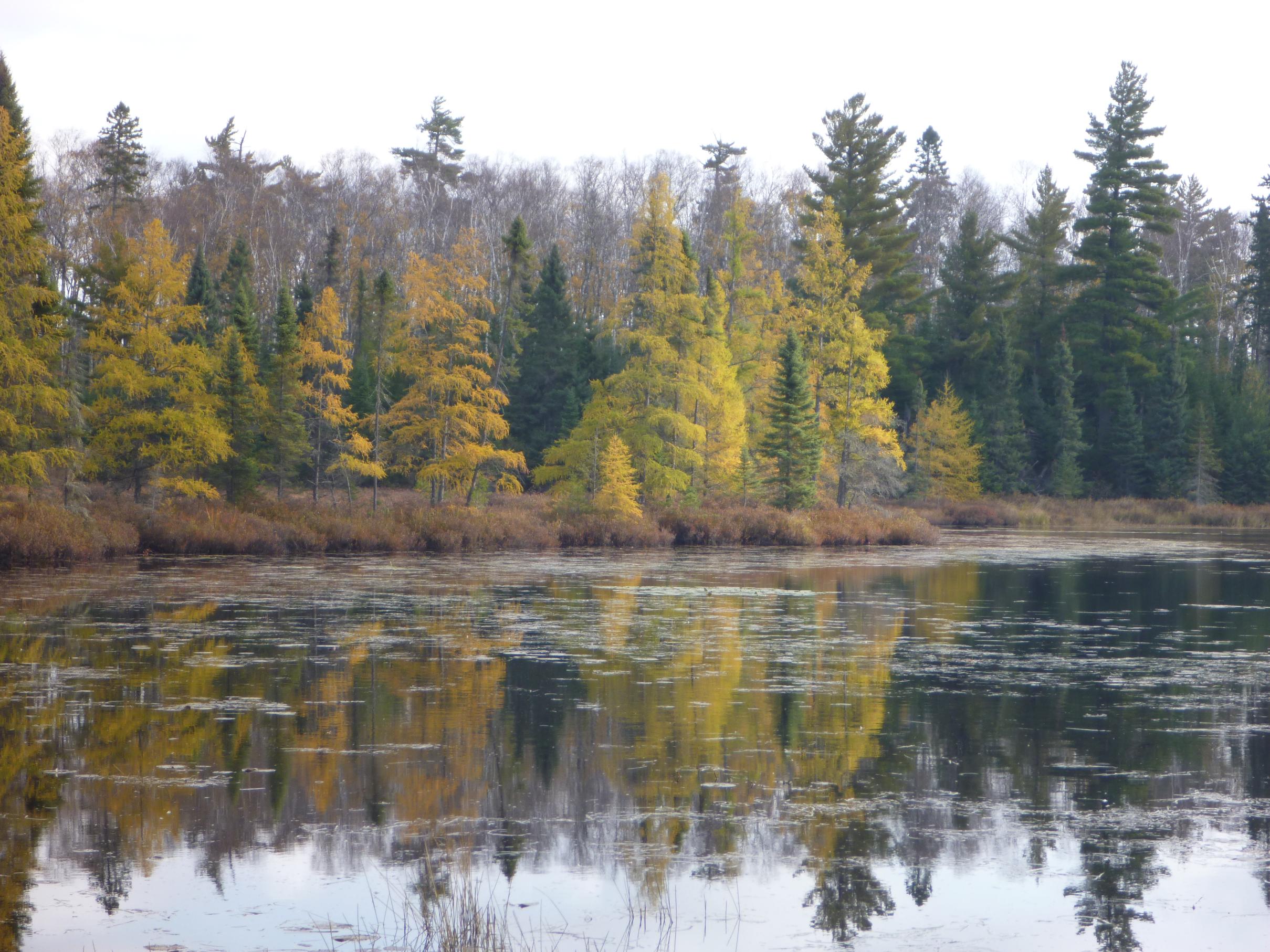 Afterwards I wished I had taken the canoe over and paddled this puddle.

A chance of showers was in the forecast for the afternoon/evening, so I set up the tarp for the first time this trip. By mid-afternoon, the wind had lessened and a few patches of blue sky were showing, so I headed back out. 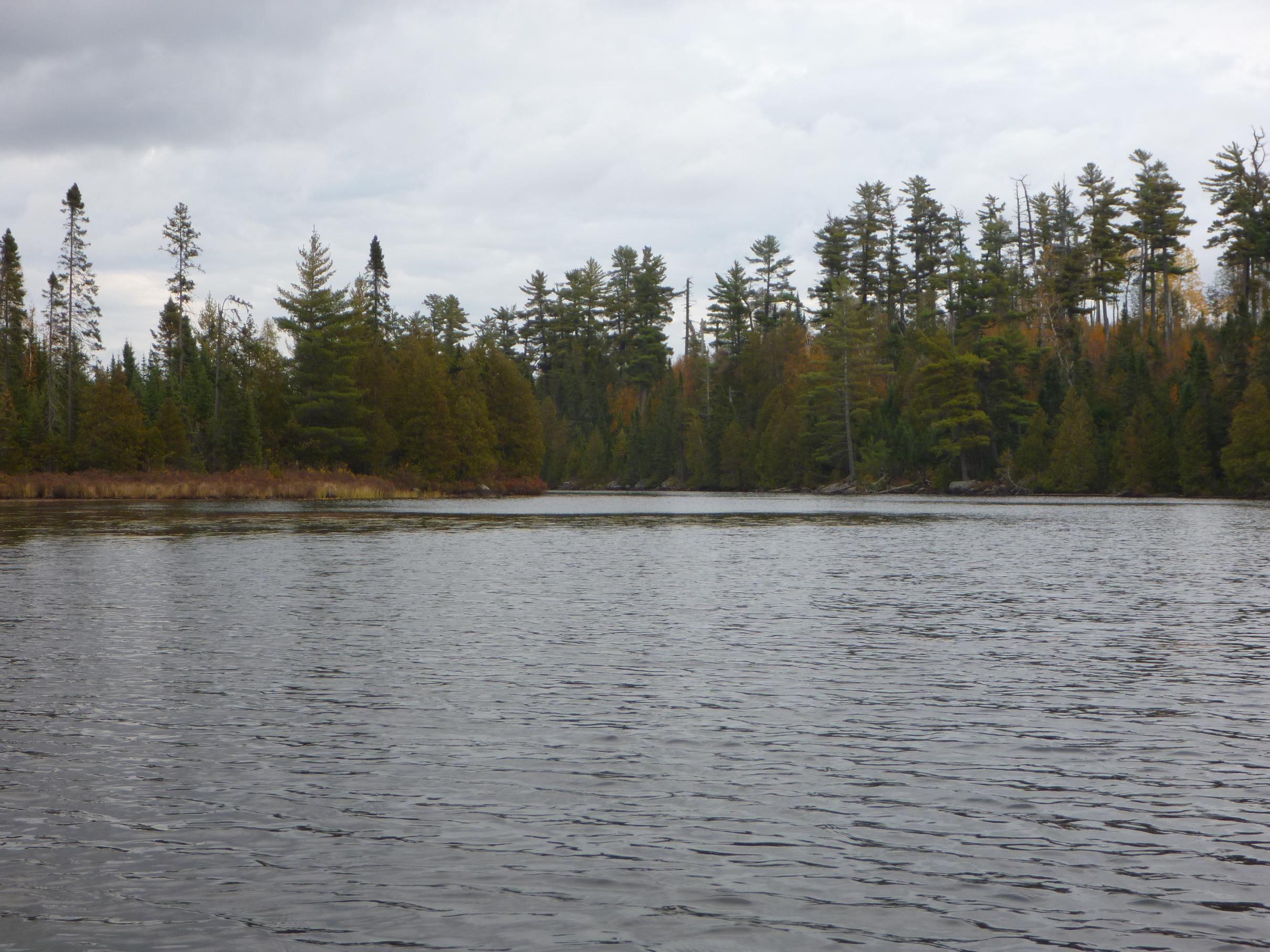 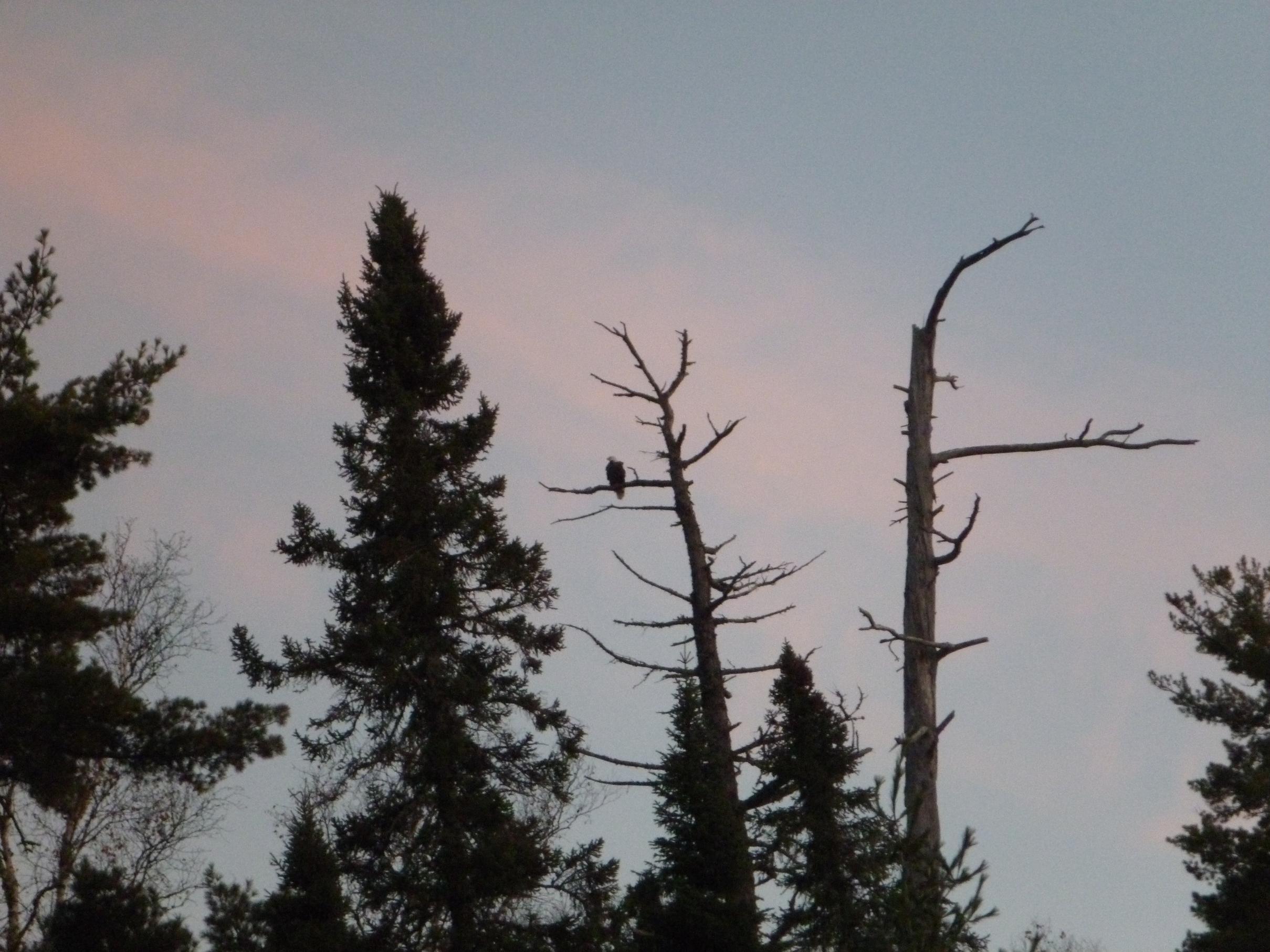 I took a short evening paddle and returned to camp as the setting sun cast a glow on the trees across from camp. 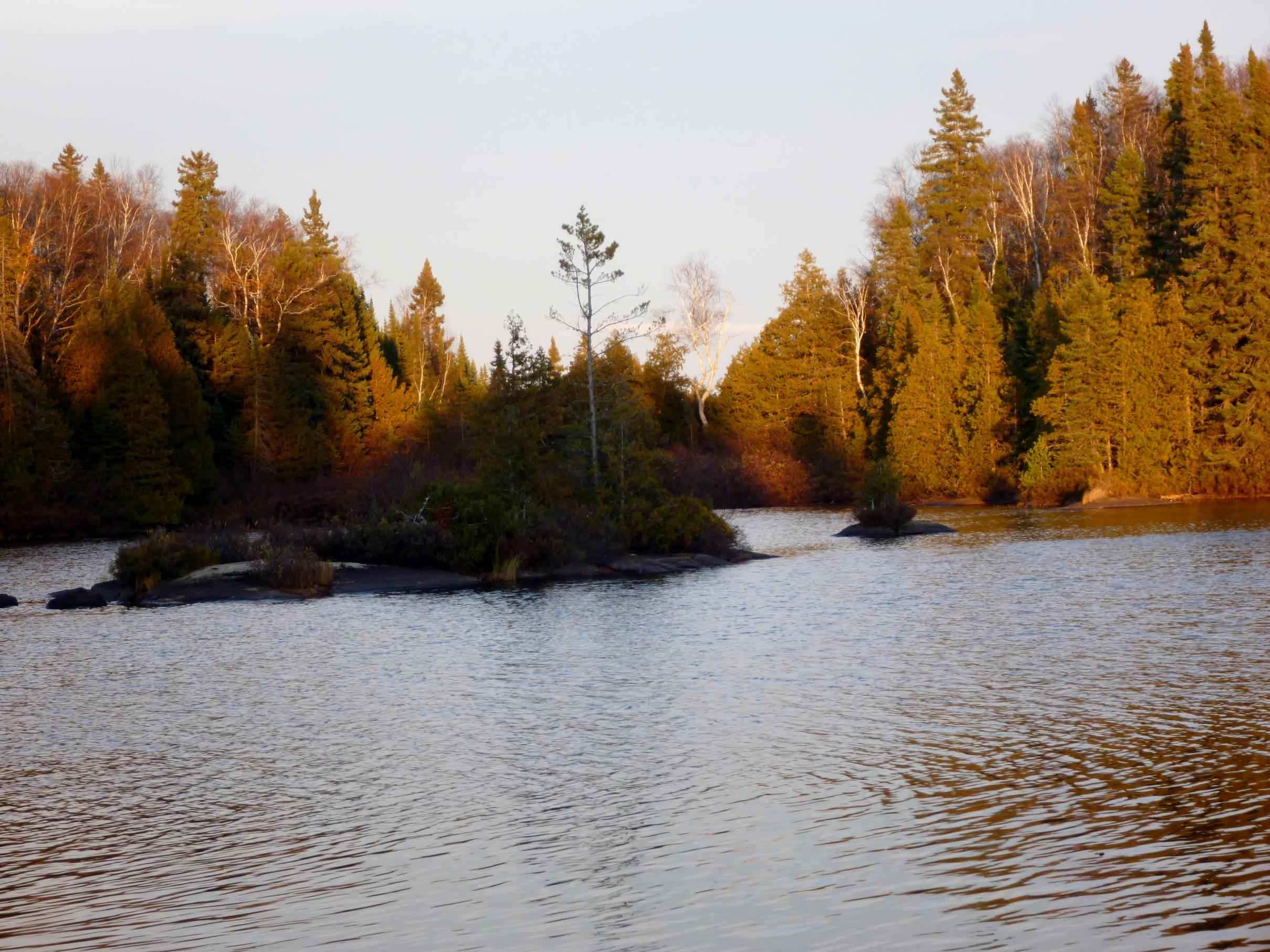 I built my first fire tonight. The dry wood burned easily and threw sparks everywhere. I soon decided it was more trouble than it was worth and extinguished it. It was a clear, chilly night with a bright moon that rose in the east about 7:30.

Tuesday was a beautiful morning. 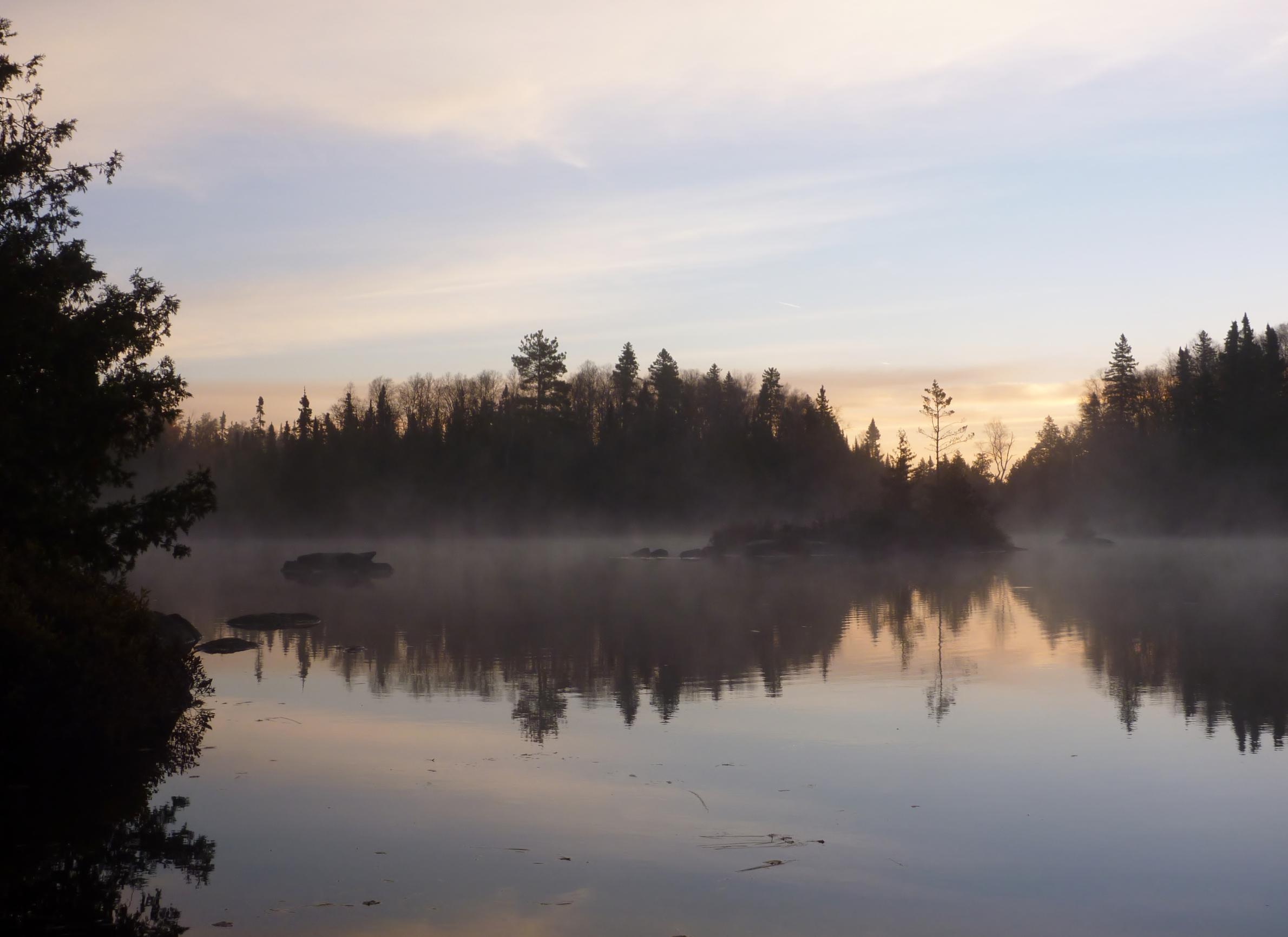 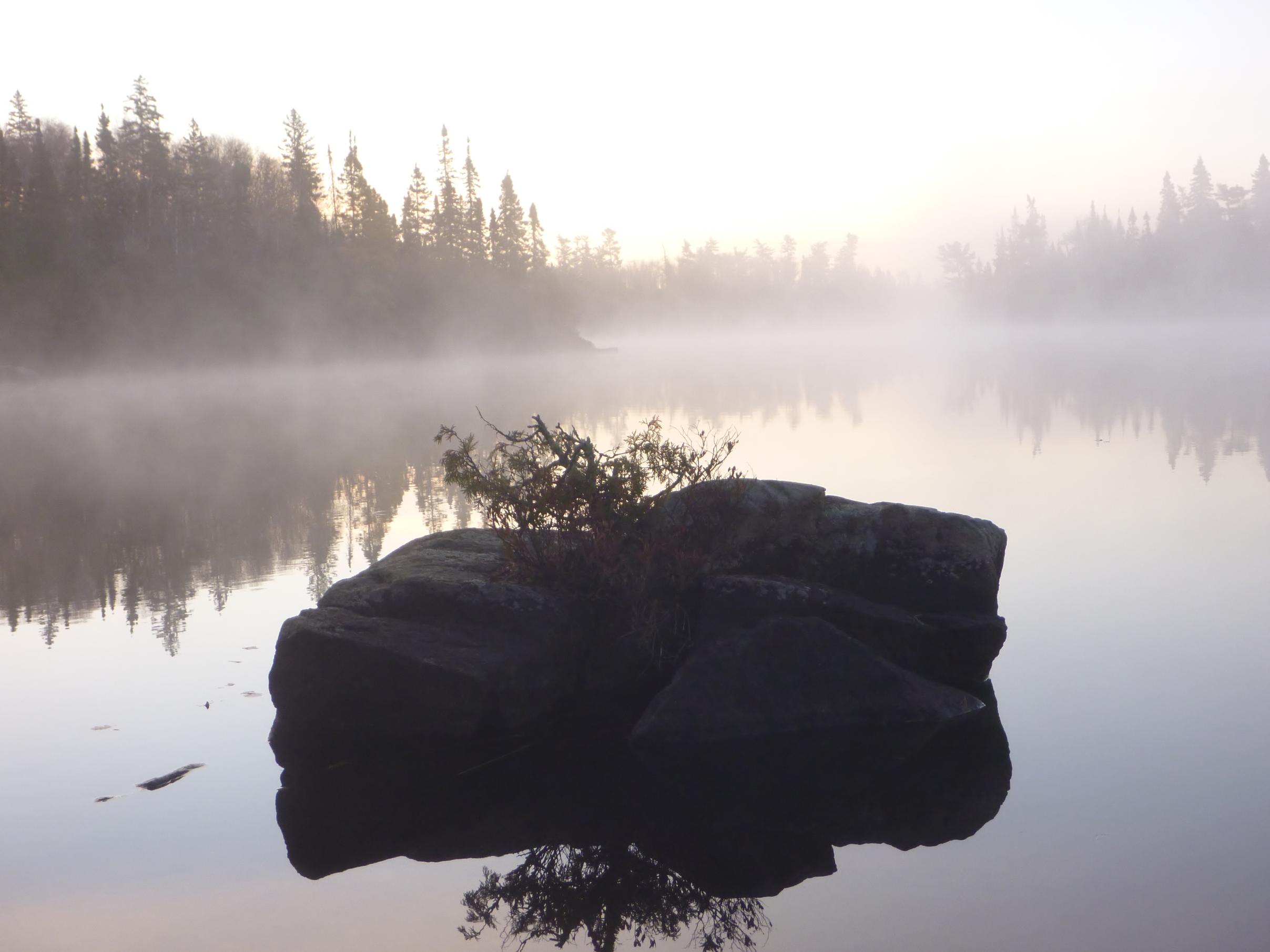 I got an early start Tuesday morning as the winds were predicted to increase by late morning and I wanted to get across Poplar before they picked up too much. I took the portage to Caribou Lake. 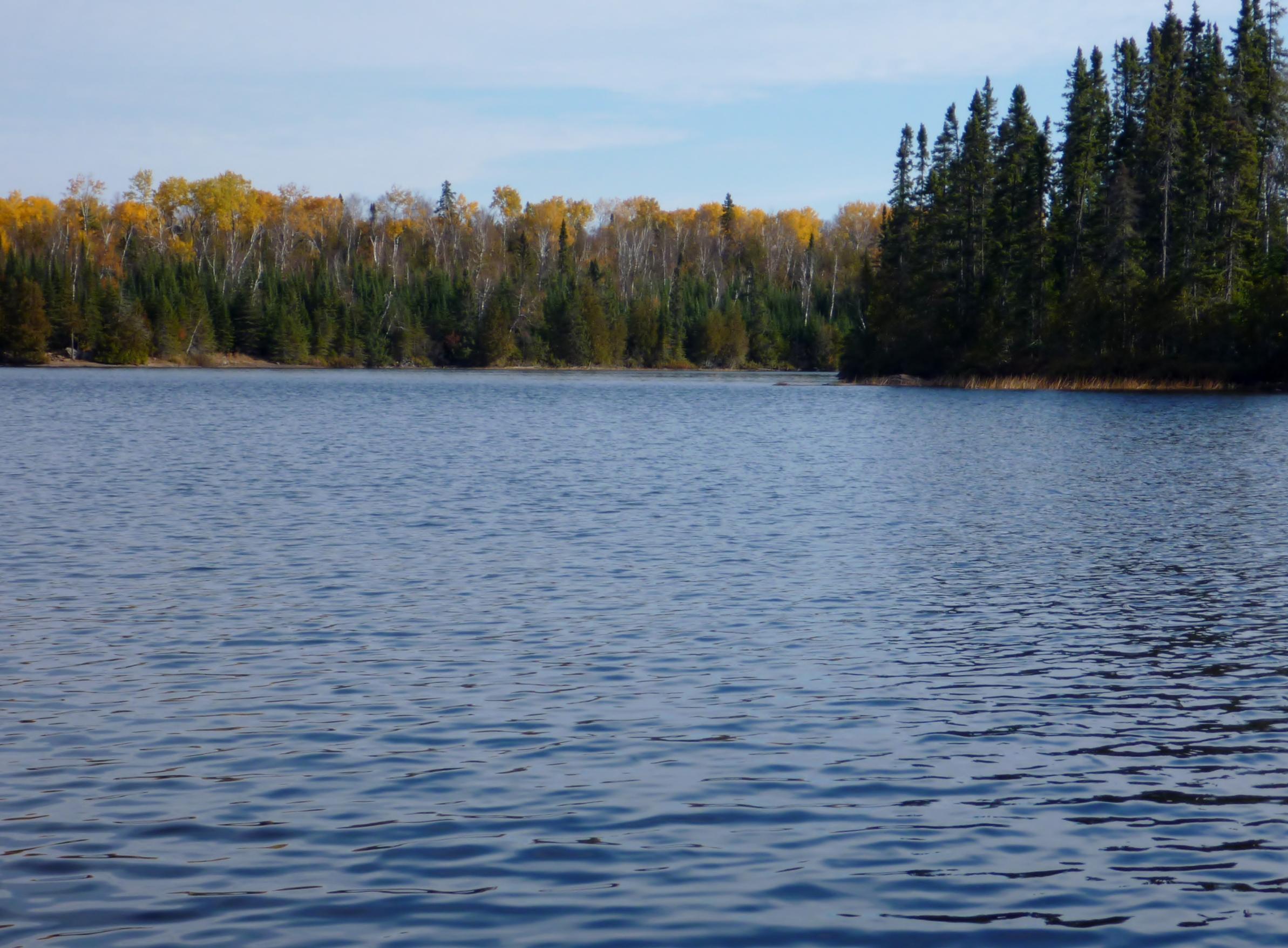 I paddled across Caribou enjoying the golden foliage on another beautiful autumn day and took the portage to Lizz Lake. A short paddle and portage put me on Poplar Lake. 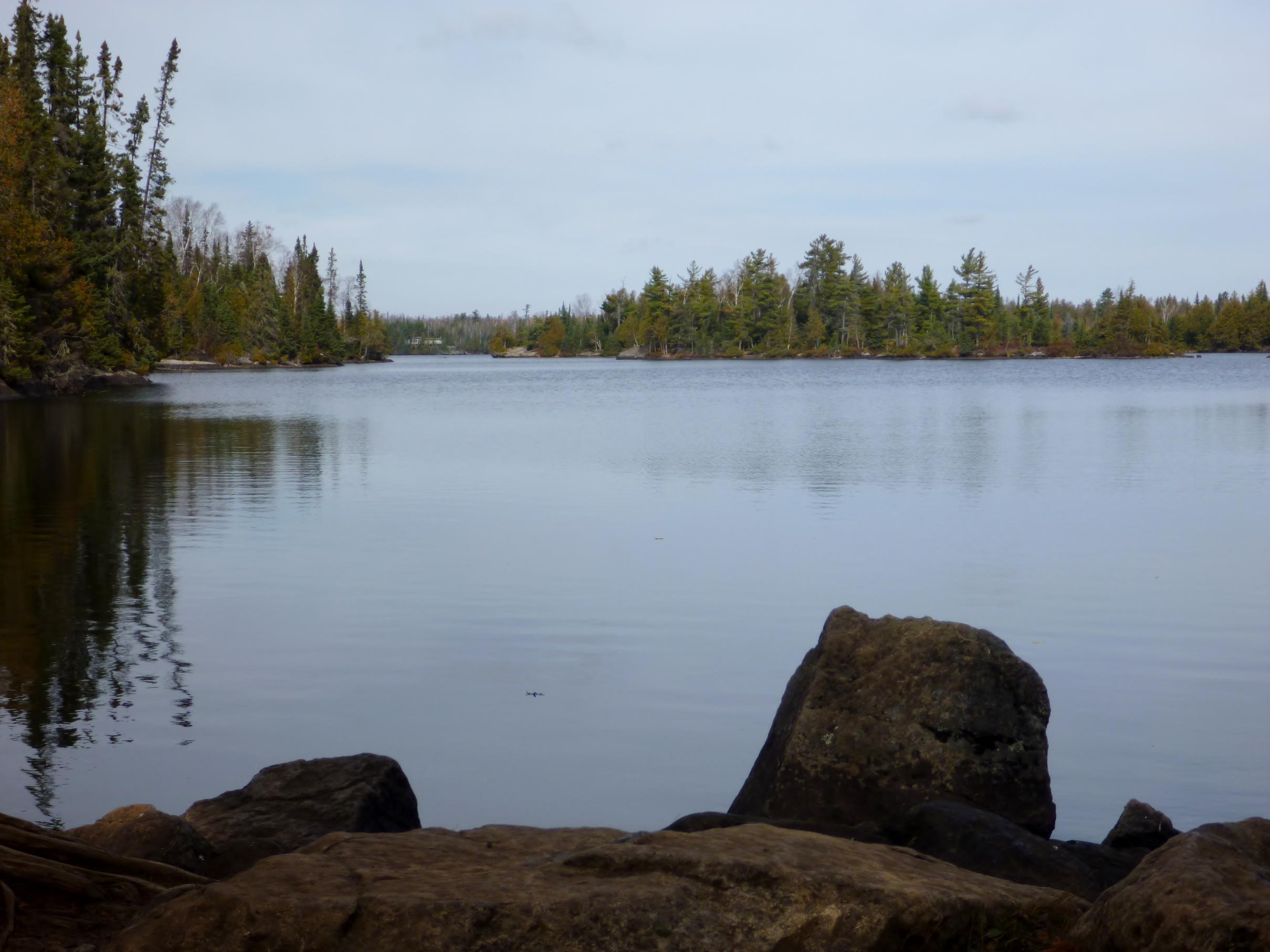 I wasn't exactly sure where Rockwood Outfitters was located on the map, but Mike told me to paddle between the islands. I found my way there without too much difficulty, arriving back about 12:30. Then it was on to Grand Marais after talking with Mike for a while. I made a quick stop at Pincushion for the view of Grand Marais (GM), the foliage and Lake Superior. 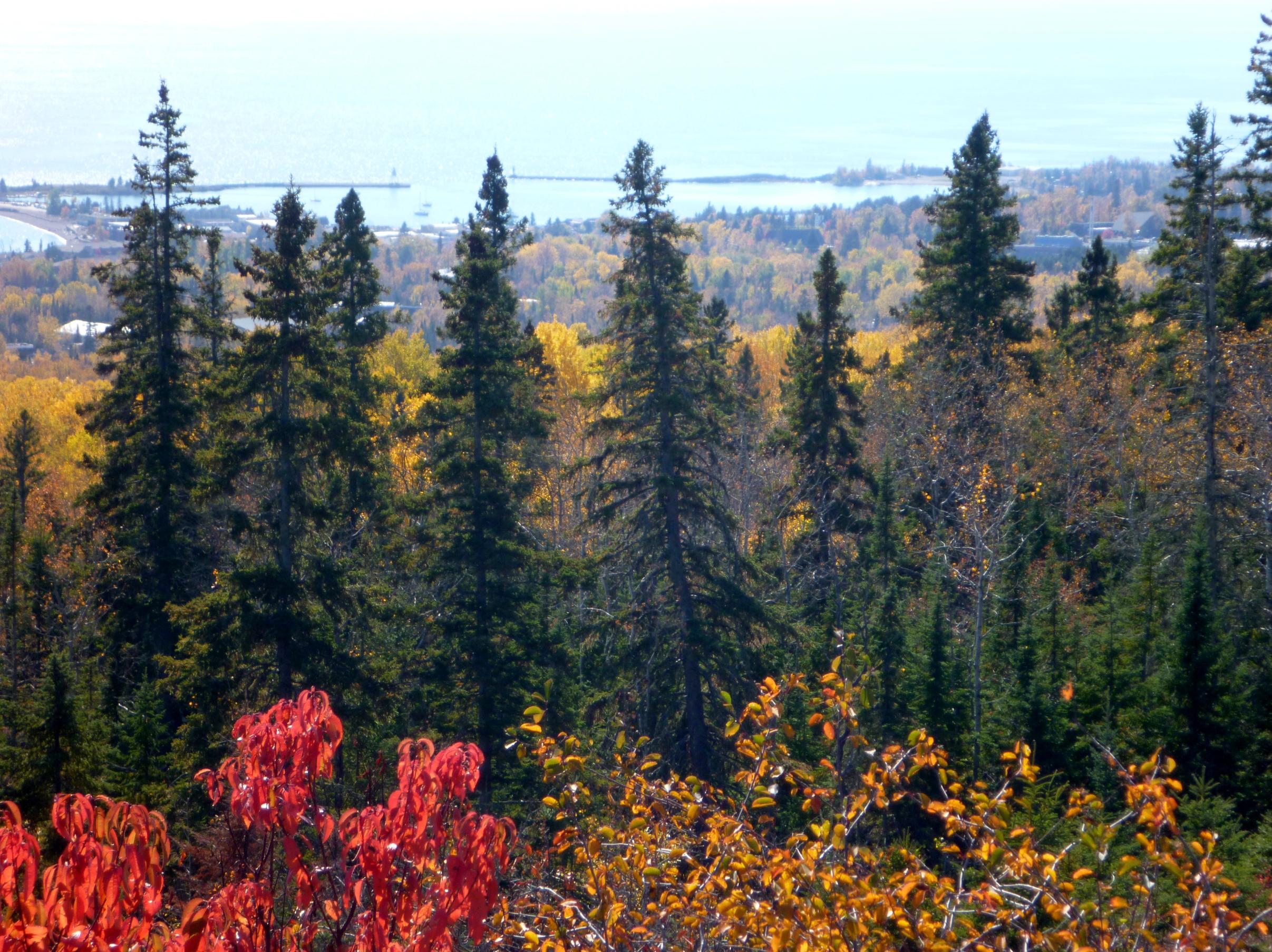 Next it was Java Moose to satisfy a craving - a large ice cream and double espresso. Then I headed to Wedgewood Motel for more coffee and the post-trip cleanup. Dinner was scheduled for 7:00 at My Sisters Place with George and Mocha. Mocha forgot all about it, but George and I ate anyway.