The Magic Trip _ A Short One
by IBFLY

Trip Type: Paddling Canoe
Entry Date: 09/27/2012
Entry Point: Bower Trout Lake (EP 43)
Exit Point: Ram Lake (EP 44)
Number of Days: 5
Group Size: 1
Trip Introduction:
This was a mercy solo trip granted to me by my family. I hadn't got my usual quota of time away this year due to work and family commitments - and could only spare 5 days instead of my preferred longer trips but it was a grand trip all the same. I had perfect weather, sunshine all the day, darkness all the night, next to no wind and time to enjoy it all.
Discuss Trip: View Discussion Thread (29 messages)
Day 1 of 5
Thursday, September 27, 2012
Day One: The Sentinels (The day being clear the sky being bright) Lakes: Bower Trout, Marshall, Dugout, Skidway, Stinky, Swan, Vernon, Brule Bay 9 miles paddled 731 rods portaged Pack weight at start: 40lbs Canoe: 32 + paddles, yoke, pfd etc. = approx 82lbs total weight at start
They watch – turning their eyes only as much as they need, but hopefully entranced by the sun.
I was up to my ass in muck and some sort of water for the second time today. Still, it was a better day than others I’ve had. I’d managed to lose my cap somewhere between Marshall and Skidway so now had to squint whenever I looked toward the sun - but at least I was wet. Normally I try to refrain from getting stinky until about day 4 or 5, but now was far ahead of schedule. So I had that going for me, which was nice. 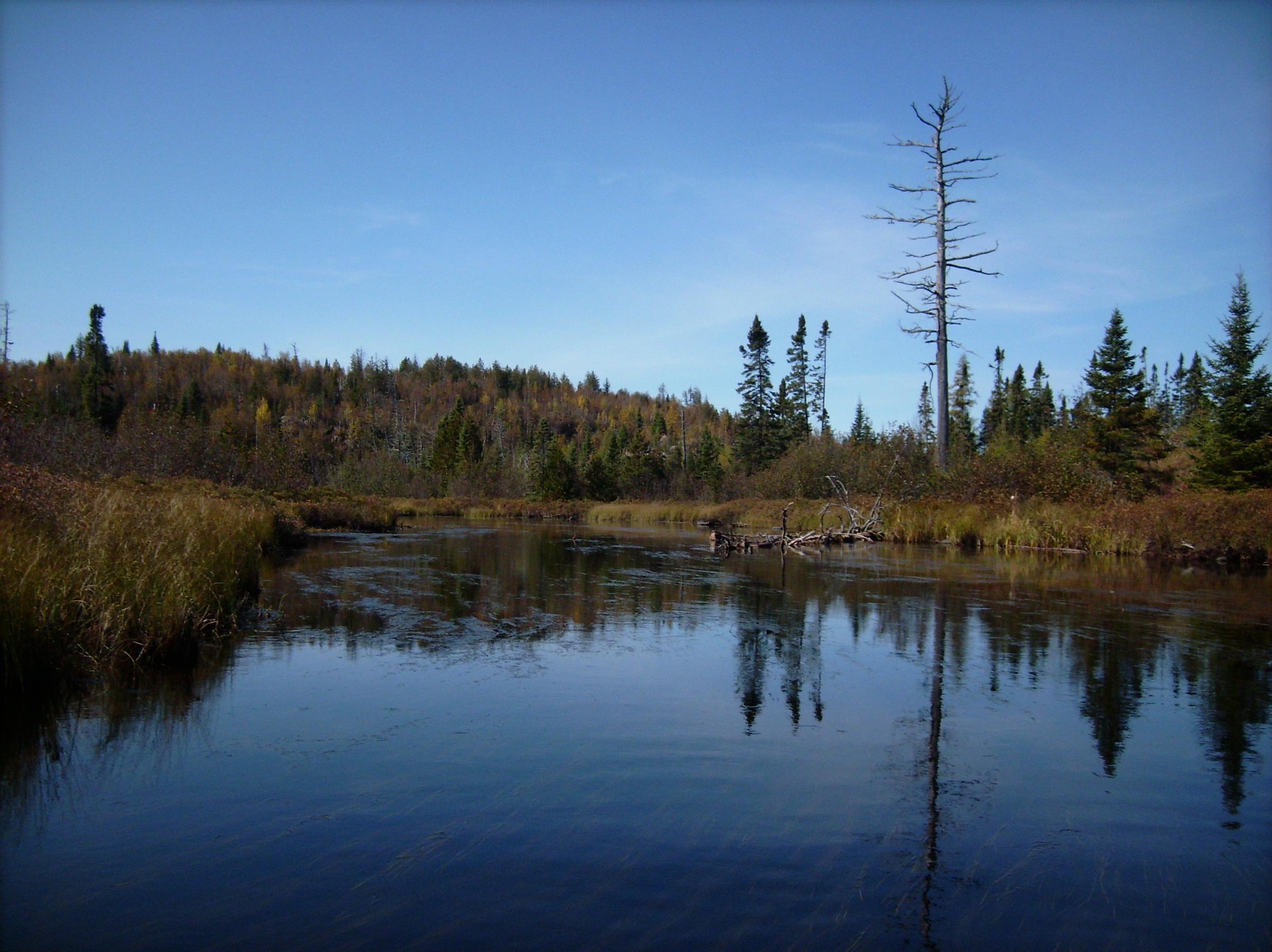 I’d been awake since 3 am and on the road 15 minutes after giving the wife another squeeze and each of the kids a kiss on the cheek. They’d rather I slip them a fiver but have to take what they can get. The drive was fine – I listened to the BBC on MPR and since the state patrol is largely off duty between 3 and 6am I made fairly good time up 35. The sun seemed to be just rubbing its eyes as I slinked through Duluth and finally broke the horizon at Two Harbors where three ravens stood frozen to the guardrail to watch the glow of morning begin, darker than they needed to be in the half light – while the soft yellowy orange pushed away the moon on Superior as if the morning couldn’t wait – even though it had all day. 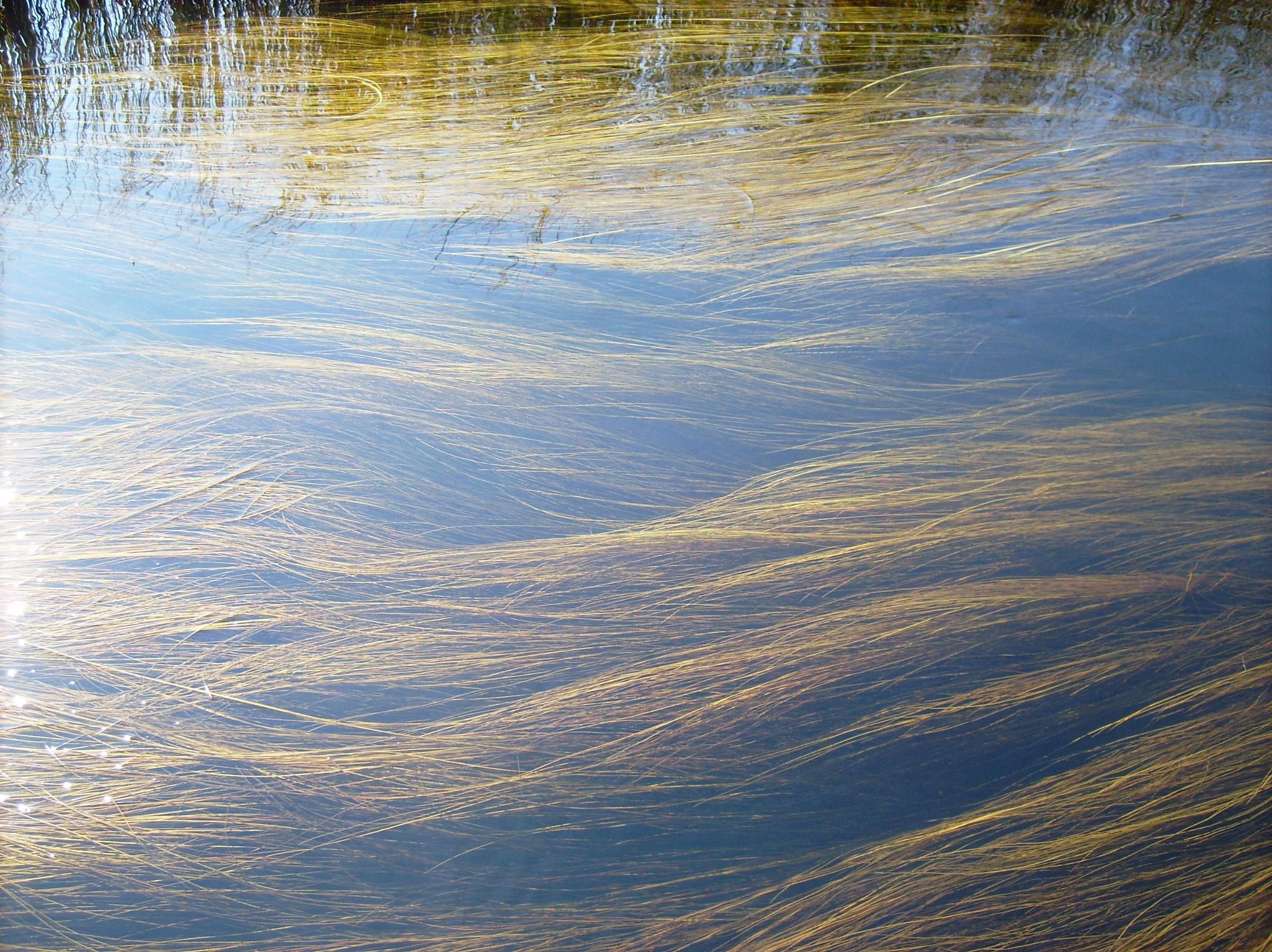 I had breakfast and a short visit with some friends in Grand Marais and was finally on the water about ten. I’d stepped balls deep in the muck at the Bower Trout put in as well. Now it was noon and I was on Swan. A raven picked at the carcass of a gull along the shore. I had rocks and a few short portages under my belt and the promise of the day’s toughest carry just ahead. I ate a few fun size Oh Henry bars to give me strength. I’d have brought a Guinness but for the rules and it's a well known fact that Oh Henry bars are indeed one of nature's most perfect foods. I thought about the ravens, having seen a fair few of them today. There had been another on Dugout and I think not the same one on Skidway. Though they only ever passed me and seemingly paid me no mind, I somehow felt watched. I don’t like the feeling of being watched, no matter how benevolent. 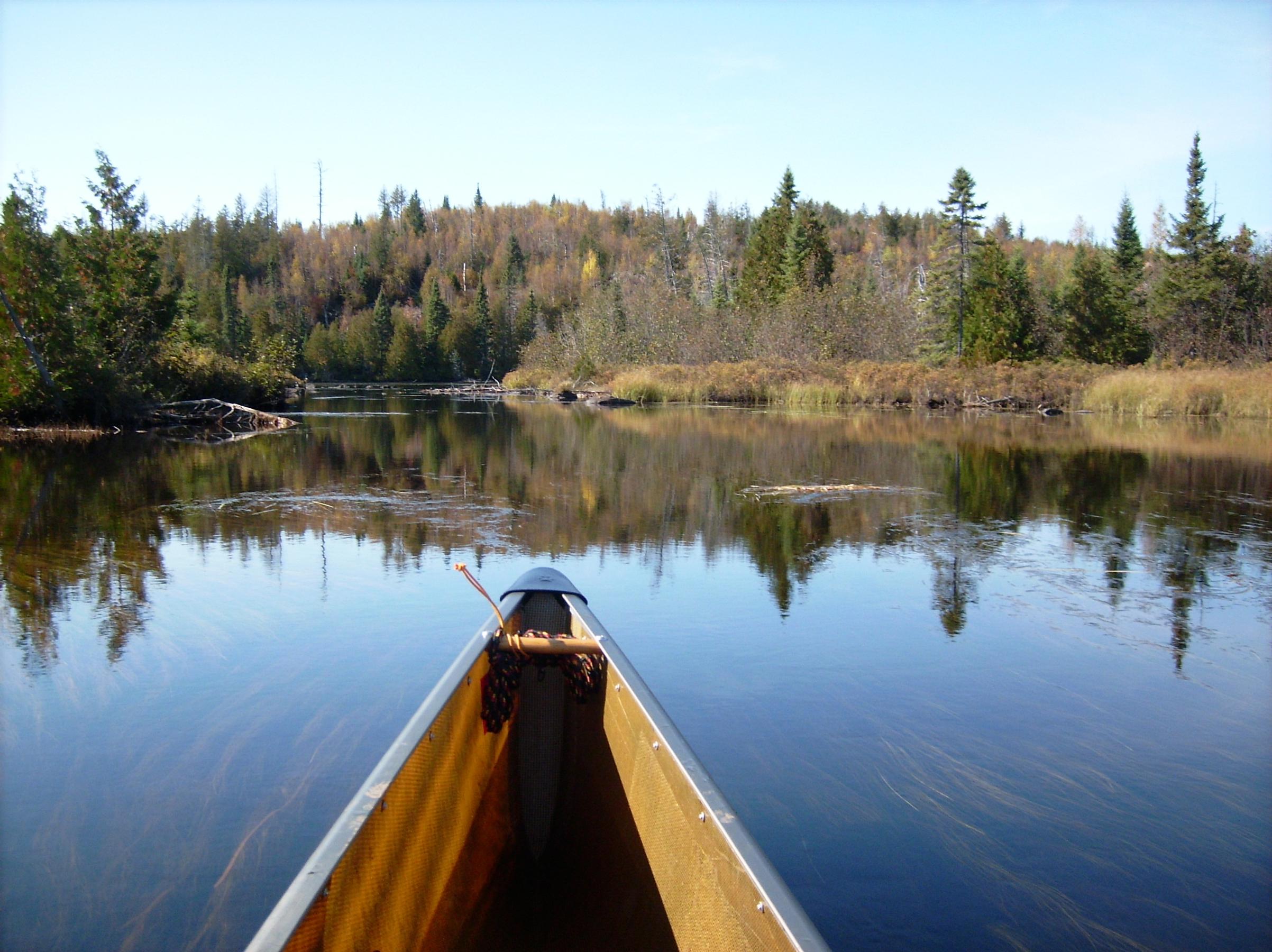 I remember when I was 15 and my father had given me an errand to run before school – a message or delivery of something we needed – and I had to leave the Falls Road and cross over the Shankill to the Crumlin and back again. The trip crossed a few checkpoints in the day and so could be a bit dodgy. I'd done it before and would again after. It was best to do it early, just as the sun was rising to lift the chill off the streets and before it got too high because there wouldn’t be as many peelers and the chance of being chased or having to fight wasn’t as great and on the way back the sun would be in the eyes of the UDR black squads with their guns on the rooftops who watched and maybe too the squaddies watching from their tanks and I hoped I could make my way unnoticed by them and the eyes I couldn’t see and get through the checkpoint back home for toast and tea and then off to school where the christian brothers could give me a fair whack for learning what I didn’t know under their baleful eyes. Bastards them all. A raven had flown at me that morning as I stepped around the back of a garden. Sometimes it's the smallest things that bring you back. 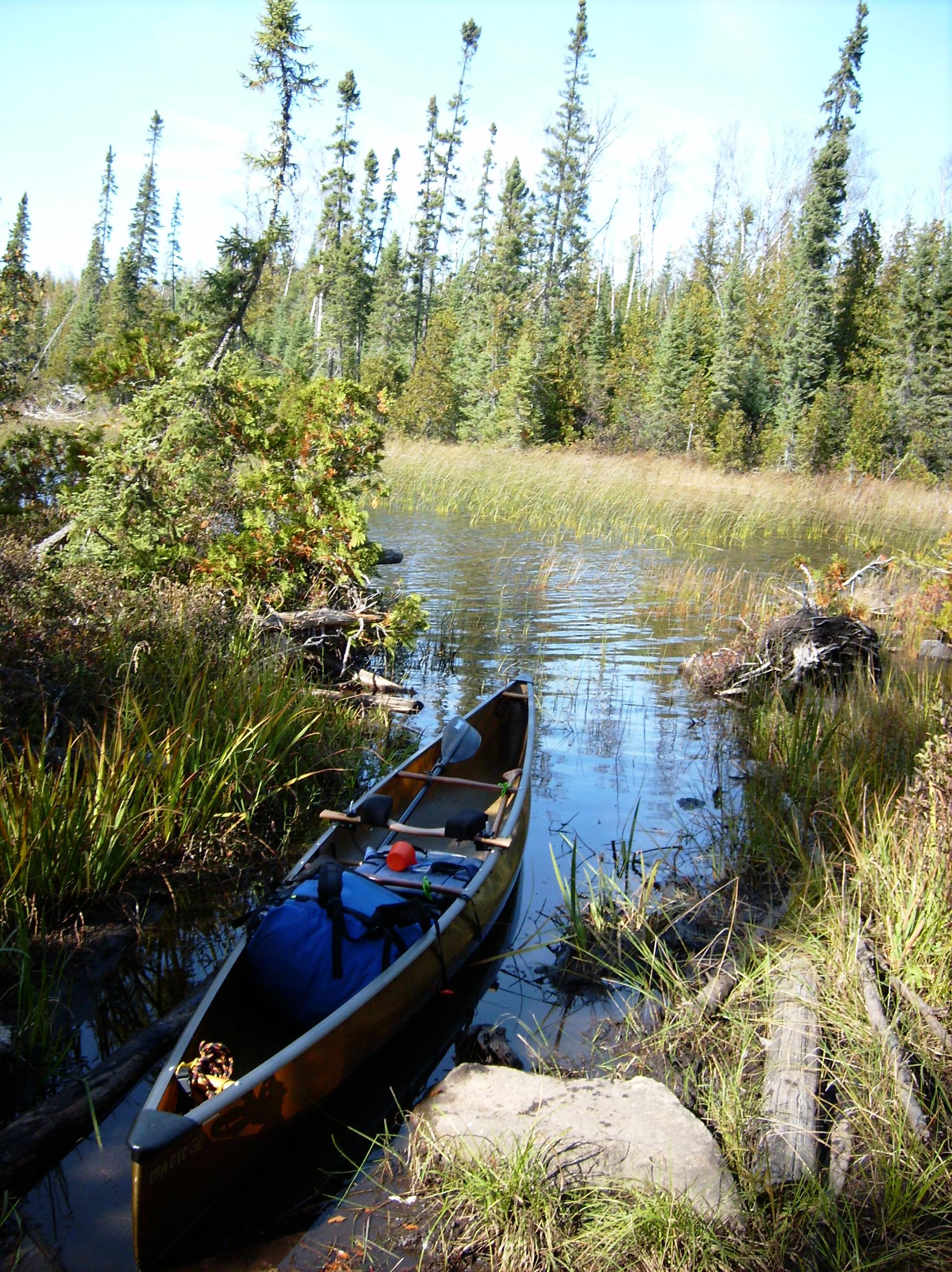 The long portage from Swan to Vernon was done in a flash. I don’t remember much about it now except that it was a bit rocky with a climb at the beginning, a descent down at the very end, and the put in was a bit rocky. The paddle though was brilliant, every stroke a gift. Sun, easy water, only the slightest breeze, more cooling than anything. Vernon Lake was a charm.
My new for me Bell Magic moved easily along the water and I worked on my solo strokes from the center of the canoe. How different it is than paddling my SR Q17 turned around. I lingered a bit on Vernon – just to have the luxury. Both camp sites were unoccupied as they’d all been this day, but I had it in my mind to make into Brule before I set up camp. Even though the weather promised to be fair tomorrow, I wanted to be on the water early so I could beat any chance of the wind. And so I did. I chuffed the 90 rod portage over to Brule Bay and paddled easily along the southern edge – practicing my solo C’s, a brace or two, some sweeps, draws and shallow J’s – deciding that there’s no bluffing it in a solo canoe – you’d better know what the hell you’re doing and there's always room for improvement.
I snuck out of Brule Bay and into the thin east end of the main lake – claiming the first campsite set back into a small bay. It was perfect. It seemed small from the water but opened up nicely into a site much larger than I needed. 3 or 4 good tent pads, nice fire ring and a few good places for tarping. I didn’t need any of them – I had my hammock. My hammock is one of the small reasons I love solo trips – so easy to set up and a pleasure to sleep in. I nearly feel guilty having it. On my group trips I always share a tent, so when I’m on a solo trip it always feels a bit like the first time I ever slept in a bed to myself and didn’t have a few of my brothers in it head to foot with me. At 52 it still feels special.
Setting up camp was fast. I pulled the pack out of the canoe and the canoe up on land. I know, I know, that's quite uncommon but it is the way I do things. The hammock went up as did a clothes line and I hung my paddling clothes up to dry in the mid-afternoon sun while I sat with a cup and a book to let my feet dry and have a snack, a drink and a bit of a read while looking at the water and no sound of anyone near. I looked at the map and knew I could have gone much further that day but I had made my goal and wanted time to think about where I was and the how and the why. I wasn't trying to make big distance on this trip, but just to have some each day. I was in the mood to linger on and explore a few of the lakes en route. 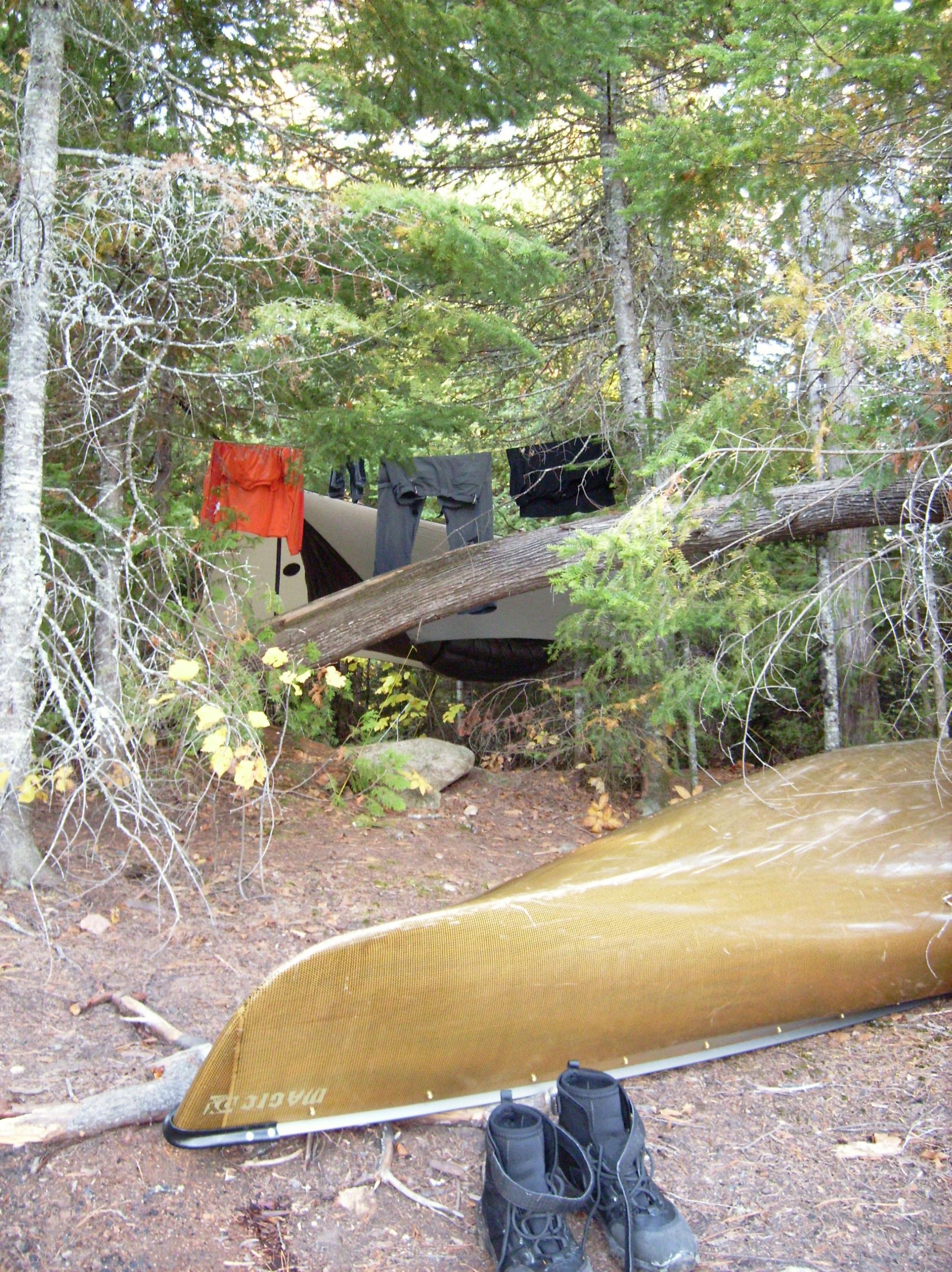 I always single portage on solo trips – but this time I tried to go even lighter than usual. My base back weight before food and drink was 25 lbs- almost 3.5 of which is my CCS pack itself. After adding food, fuel and the drink I was at 40 lbs – perhaps a bit more as my scale is not that accurate. I brought an extra shirt and a bit more first aid than I needed.I doubled up on a couple of other things and so could have been lighter. I brought in 5L of wine (whiskey would have been lighter). I brought my trangia alcohol stove and my Vargo wood stove – so there’s an extra 4 ounces for you. All of my evening meals were dehydrated stuff I made myself. Of course there was also the chocolate. I'm mad for the chocolate. 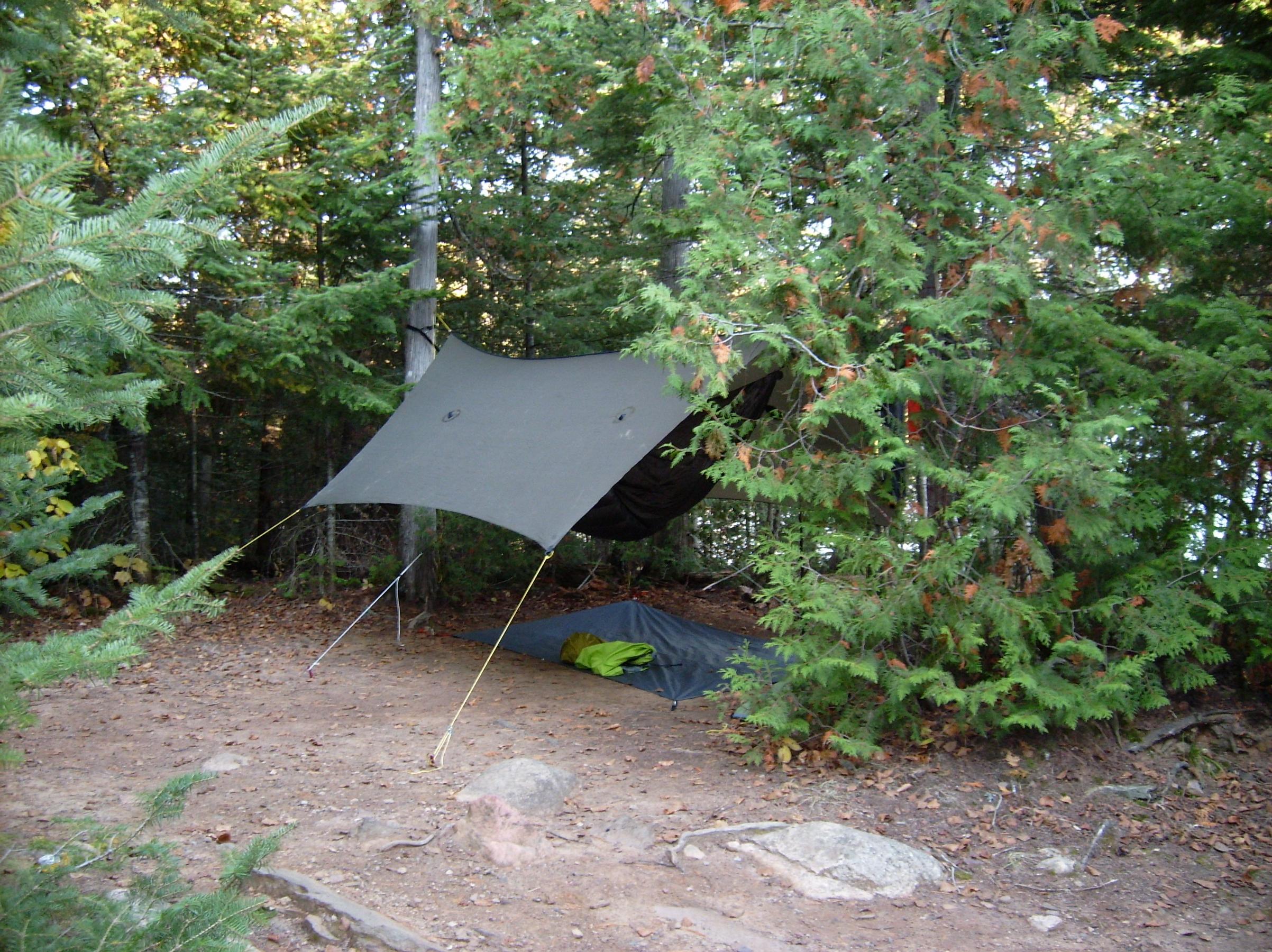 I decided against a fire this night in favor of darkness. I did collect wood of the very small variety however so I could test my new Vargo Titanium wood stove. It’s amazing how much small stuff can be gathered in a 5 step circle. I read, I made some notes, I looked at the water and the sky and was happy with most things.
As evening drew near I sat near the lake's edge and fed the wood stove to boil water. Luckily I was in no hurry for my dinner– pasta with parmesan, dehydrated chicken, sundried tomatoes, salami and pita bread- it took 15 minutes to boil the water – a few more to simmer and let sit before I could eat. A canister stove or even an alcohol stove is faster mind you. The stove worked fine – the wood left my pot fairly sticky with resin – hard to clean. But. The reflectix cook-cozies I made worked brilliantly – keeping the heat in the pot and the food for the duration. I sat and watched the stars and then the moon rise over the silent lake like a benediction.
As often happens on the first night of a solo – I had too many thoughts running through my head to focus on just one or two. I tried to let the quiet of the water and the woods calm my mind. I was already relaxed – but it takes a bit longer to stop the dialogue. A cup of Powers would have helped but a few glasses of wine did part of the job. After some time, I decided it was dark enough to clean up and get myself into the hammock, so I did. 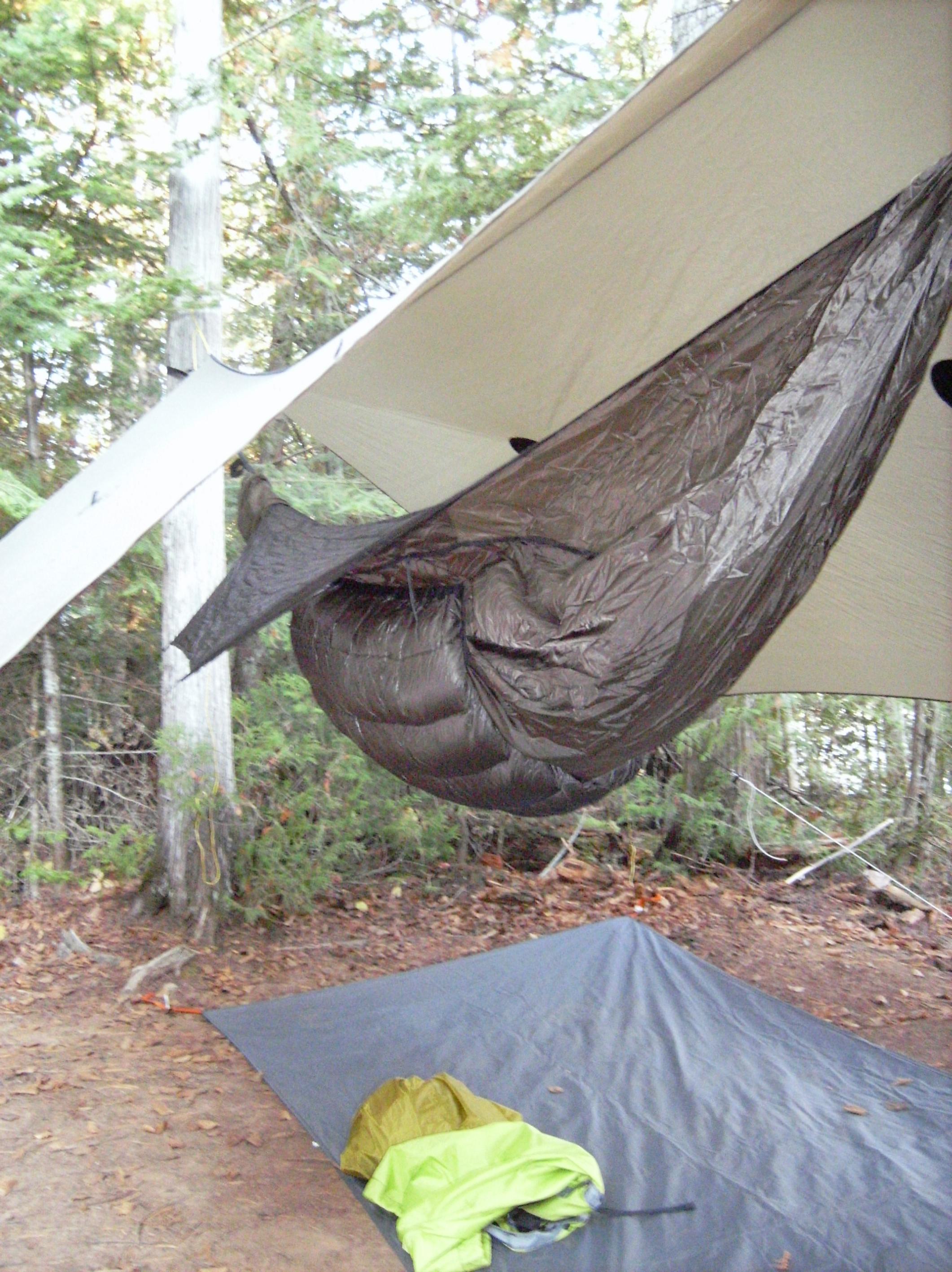