Trip Type: Paddling Canoe
Entry Date: 06/13/2012
Entry & Exit Point: Little Indian Sioux River (north) (EP 14)
Number of Days: 5
Group Size: 4
Discuss Trip: View Discussion Thread (8 messages)
Day 2 of 5
Thursday, June 14, 2012 Day 2 dawned drippy. It was to be a travel day and we had not rigged the tarp because the night before was nice and who wants to pack one more thing? Right? So we ate our oatmeal in the rain and got soaked in the process. The rain was not hard but it was steady. While eating, Allan got out the weather radio he had had brought along and got us a forecast. Rain on and off with storms. Potential for severe storms. Now what? Tomorrow is forecast to be a bluebird day. Right now our entire camp is wet. WE are wet. I am not fond of the idea of multiplying misery with risk. So we opt to stay put for a day and fish between rain events. Even as we make the decision the skies brighten some and we were reinvigorated. Fishing now is always better than fishing later. That is how Allan and I were fated to meet “the fish”. We had fished around the south point guarding the bay simply to stay out of the wind that was picking up. Alan was using a new silver flecked white tube bait. I do not use tube baits and was surprised to note that his floated in spite of the weight. I was told they often do when new. Well, he cast toward shore and landed right where water met rock and BAM! A fish blew up on it but he missed setting the hook so the tube flew back to within twenty feet of the canoe. He reeled in the slack and was hustling it back to recast when a fish of unknown species following with back in view, engulfed it just shy of the boat by a few feet, went airborne across the front of the bow, landed on the other side out of my sight and keep on going. After about thirty yards the line went slack and we sat in silence, stunned by the viciousness of the fish. “I don’t even want to catch that fish,” Allan said quietly. “It scares me.” That one moment made the entire trip memorable.Returning to camp we meet the boys and had lunch. While eating we noticed a motor boat in Snow Bay where no motor boats are allowed. After lunch they were still there and though the sky was brooding we launched to fish around the island. Shortly the boat raced by us to the west. I no sooner wondered aloud what the hurry was than we heard thunder. So we hustled back to camp and no sooner got into the tent than the storm struck. It was an intense downpour with high winds. Allan and I were somewhat protected by a hump but the boys were exposed on the point. Later I learned that they had to brace the tent up with their hands. As I was wondering aloud about their situation we heard an ominous crack and the unmistakable sound of a tree falling…toward us. I was sitting up, looking out the window at the waves and I put my hands over my head and braced for the impact. Instead the tree thudded to the ground about thirty feet from us. At the time we thought it was much closer. Once the storm passed it rained most of the rest of the day. We put up the tarp and you will see the top of downed tree just beyond Alan in the picture. We had Cache Lake chicken and dumplings for dinner. Comforting as well as filling. 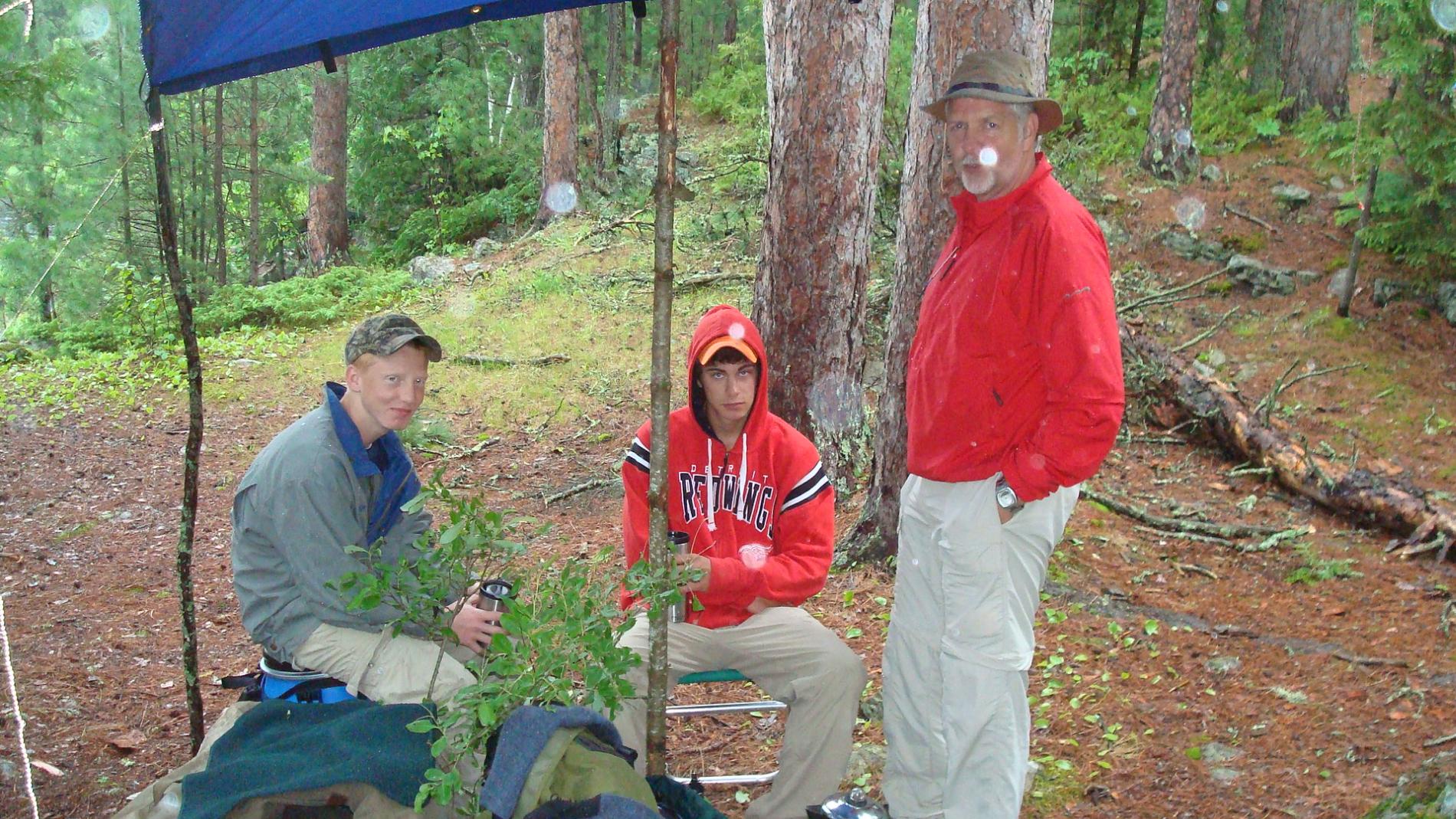