2 trips in one?
by DanCooke

Trip Type: Snowshoeing
Entry Date: 12/30/2012
Entry Point: Lizz and Swamp Lakes (EP 47)
Exit Point: Clearwater Lake (EP 62)
Number of Days: 8
Group Size: 6
Trip Introduction:
A trip broken into 2 areas with two different groups.
Discuss Trip: View Discussion Thread (10 messages)
Report
Trip Report Dec 30, 2012 to Jan 6, 2013. Started out by Cross country skiing down the old Finn Lake Road, Banadad trail. Four of us hauled sleds into Swamp Lake, then on to Caribou skirting some slush into Horseshoe. The trial and portaged did not have enough snow to adequately cover the tops of the rocks. Luckily the sleds did well careening off the top of the rocks, with only minor loss of sled base material. Everyone had different color sleds, so when I was at the back I could see the different plastic colors being contributing to the exposed rocks and came to the conclusion the orange sled seem to be the easiest to scrap material off of. On Horseshoe we met up with Bear who had gone up earlier and set up a camp on Allen Lake with two other friends of his. We pulled through the narrows inches from open water and onto the rocky portage to Allen. Allen Lake had some thin ice in the flowage leading to Horseshoe. Ski poles broke through to open water on both sides of where we pulled through. Getting to camp where wood was being cut and split, I saw we were well supplied with firewood. We set up my new tent back in the woods; then we worked some more on firewood. Supper and tales took us long into the evening. Bear’s canvas tent had a ridgerest floor covered by a canvas tarp or two. The Knik woodstove was on a chipboard base and wood stacked inside dried and warmed next to the stove. Cheesy bread and a drawn out supper was relaxed. We returned to my tent to retire for the evening.

Jan 31st 4 of us took a ski day trip down the length of Allen into Pillsbury on the Hensen, Gaskin, Jump and Back to Allen. It started cold but the sun was warm and was pretty still so there was no wind chill to speak of. Snow depth was great for skiing with the tips never buried into the snow. There was some slush but not a lot, never had to stop and scape. Got back as it became dark. Great moonlight evening with a few wispy clouds. A New Years celebration, and lighted Frisbee on the lake capped off the evening into the morning hours. The Jan 1 was an afternoon into early evening ski to Jump Gaskin and returning to Allen by way of Horseshoe. It was fun to see where I had been this past October.

Jan 2 was a longer day ski through Jump, Gaskin to Winchell. I had left early to be able to take pictures and not slow down the others. As it turned out due to a later then anticipated start and an equipment failure I stayed out in front until I turn around at Winchell’s cliffs. There was low hanging clouds and rime ice on the trees, a very pretty sight to see. Moose tracks on Winchell and a number of Otter slide kept my interest on some of the long stretches of Winchell. Returning the headlight was needed on the last portage back into Allen Lake.

Jan 3 we packed up and returned to our vehicle and left to start the second leg of our adventure. Parking at the Clearwater landing we skied off for Deer lake as the sun was setting. The Cliffs on Clearwater were rosy as the sun went down. The old railroad grade had been skied so it was easy going. Deer lake was windblown and we needed to keep our faces down to keep the wind off them. Moon lake came slowly and there was not a lot of light. Camp was made in the dark. The wood stove gave us warmth and cooked us a filling supper. After plenty of hot liquids it was off to a long night of rest.

Jan 4 I set up the second group tent in anticipation of 4 friends who would be joining us. I then skied back to Deer Lake and the old railroad grade to possibly them, wolf tracks were fresh in last night ski tracks. Wind whipped the snow into little tornados on Deer Lake and there was no sign of them. So I went back to camp where firewood was prepared for the evening. The four showed up as the sun was going down, and firewood was finished and supper started. January 5 came all sunny, Brian picked up a great Northern with a tip up, and it was returned to get bigger. We then did a ski adventure on to Ivory, Rocky, Johnson Falls , Pine, Little Caribou, Caribou Deer and back to Moon. This is the second time I had done this bushwack to the top of Johnson Falls. A rewarding trip and a long day all in one. The flowage did not seem as froze over as the last time, but had it’s own beauty. There were many deadfall and tangles to maneuver through and around. A mess on Little Caribou where some folks had cut lives Pines and made a fire on the shoreline rocks was disheartening that those people had no sense of those to follow. Caribou seems to go on and on at the end of the day when muscles and energy seem spent. The temps were pleasant and conditions to ski on the lakes were great. But a warm tent and supper soon brought stories of the day and thoughts of future where to visit and explore.

Jan 6 Packed up and return to the Cities. 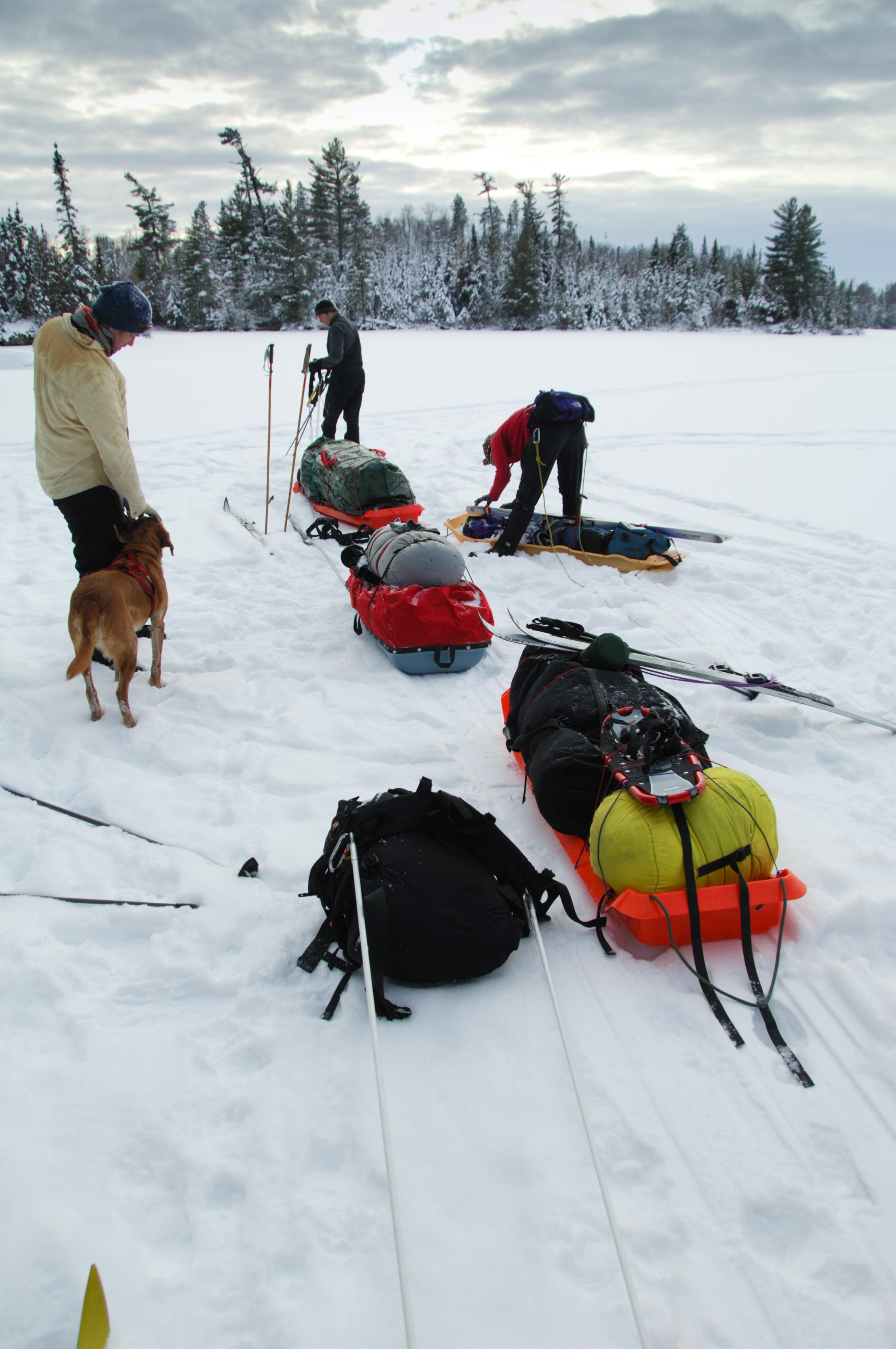 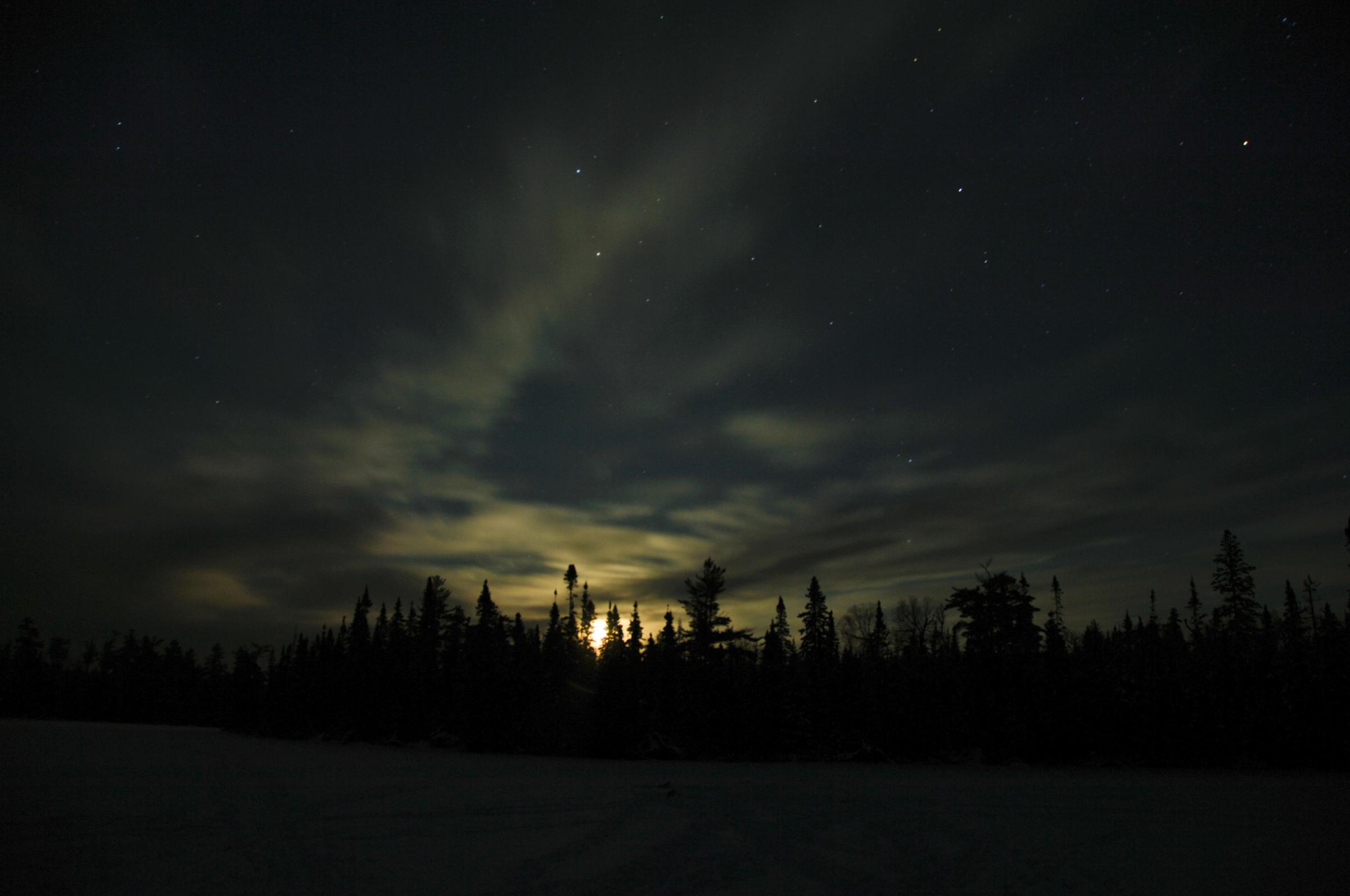 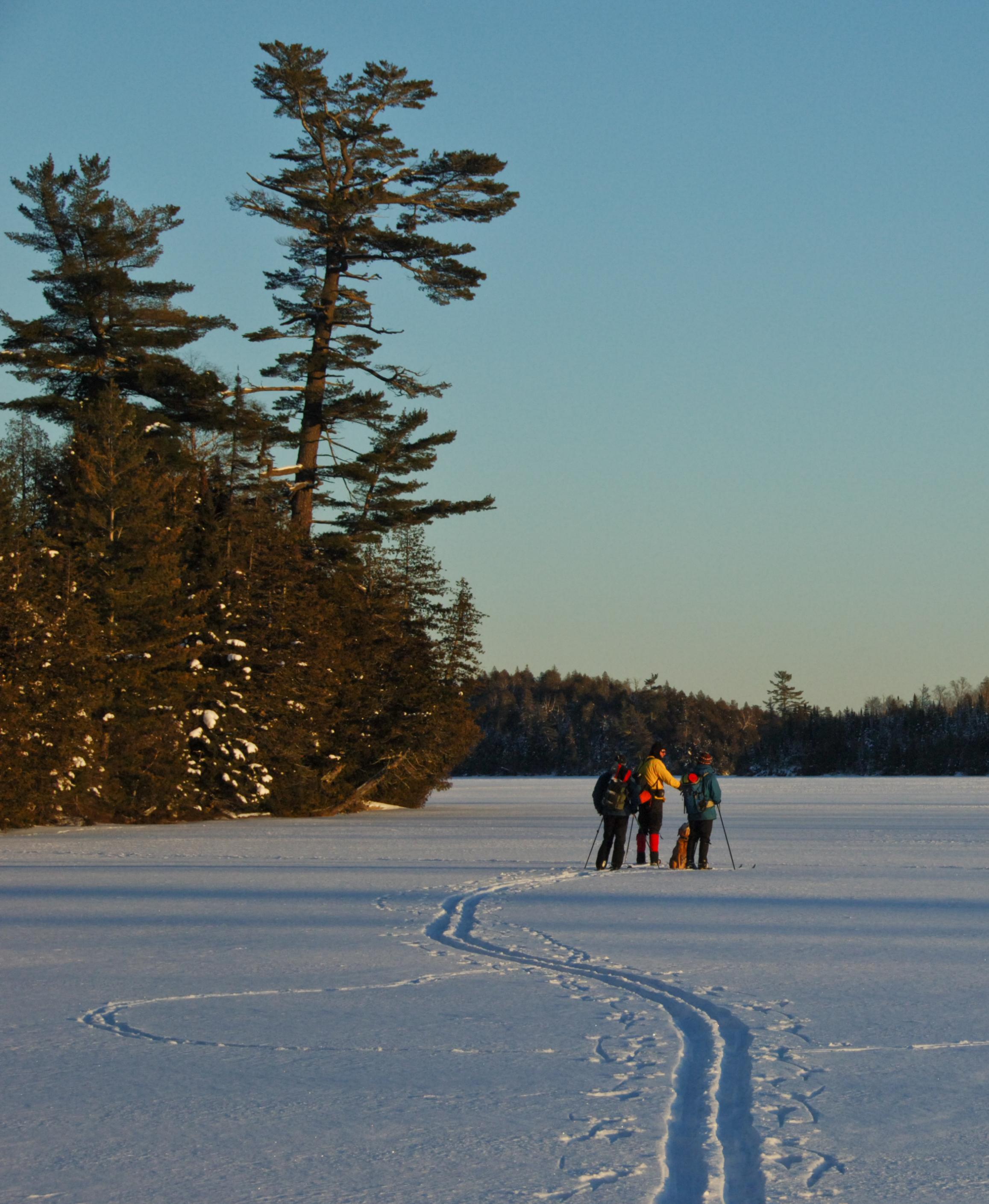 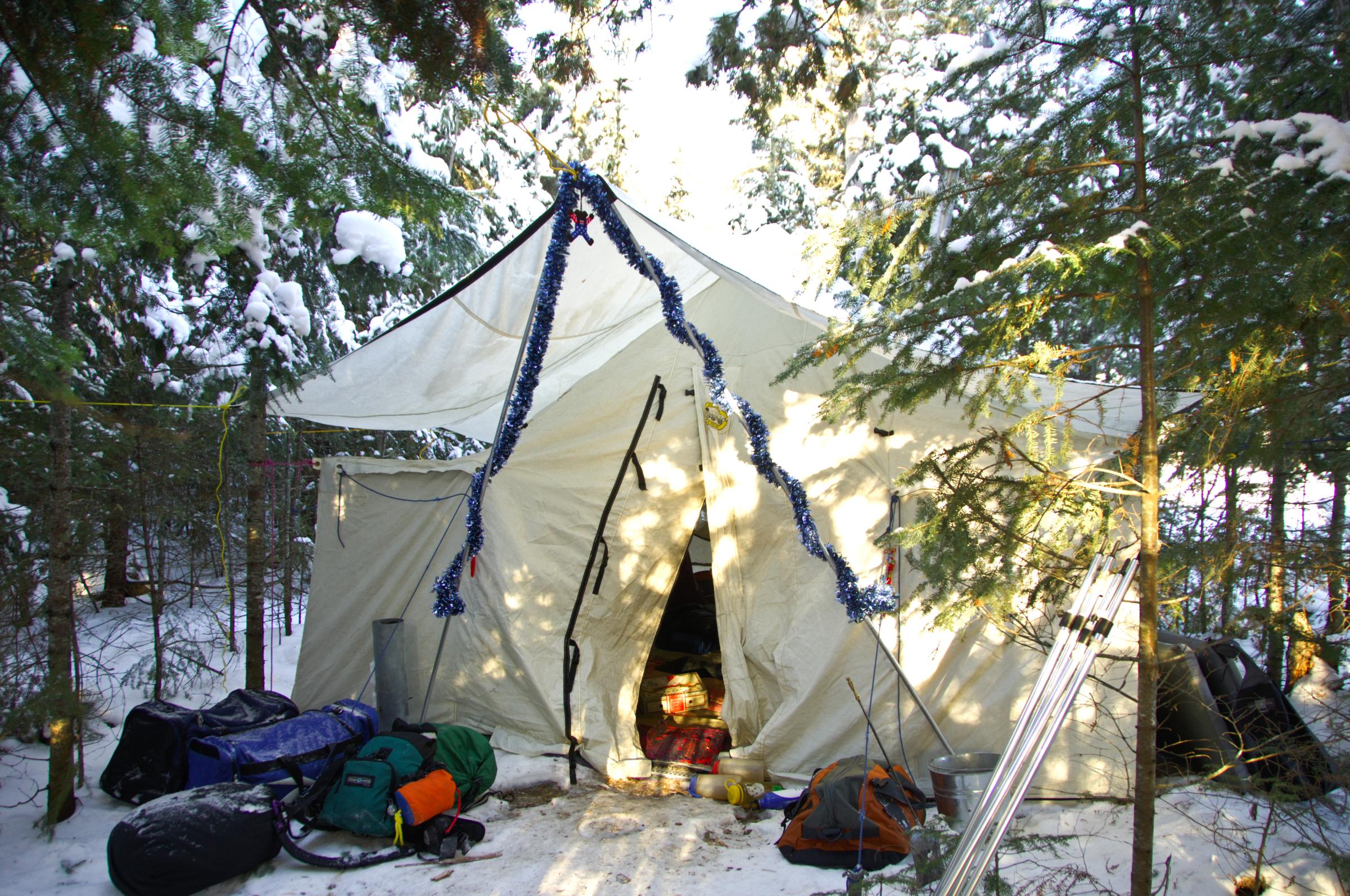 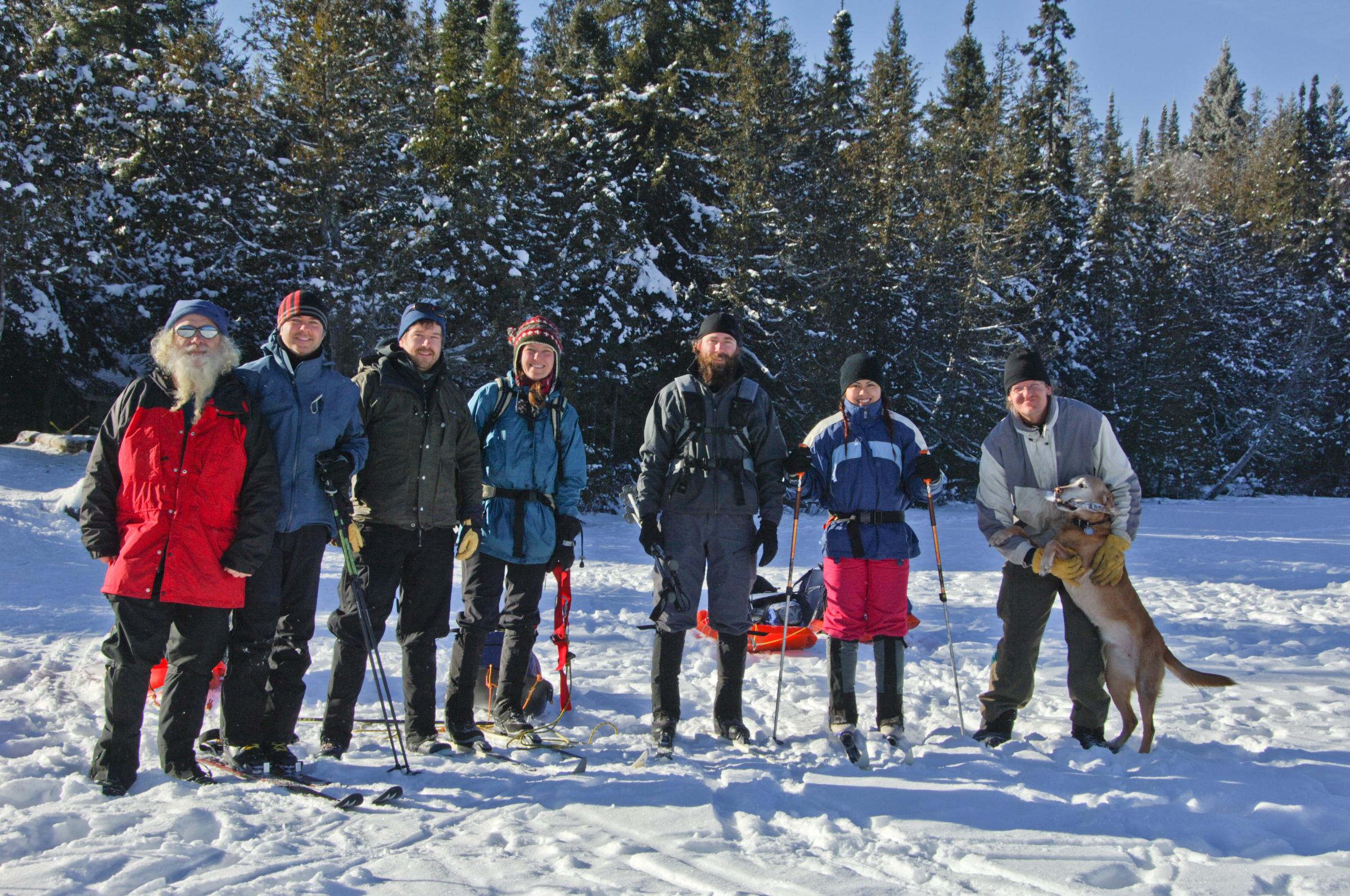 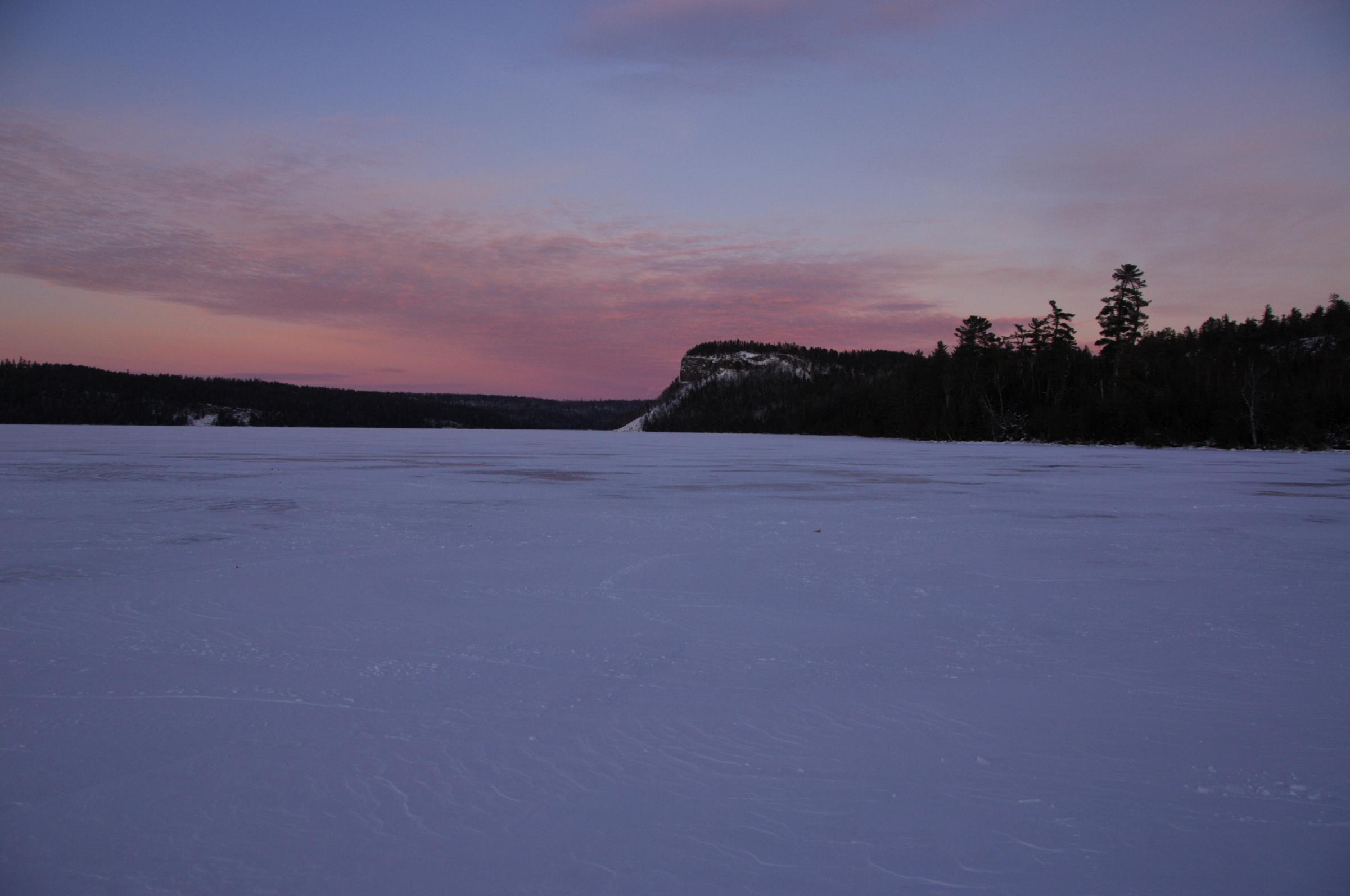 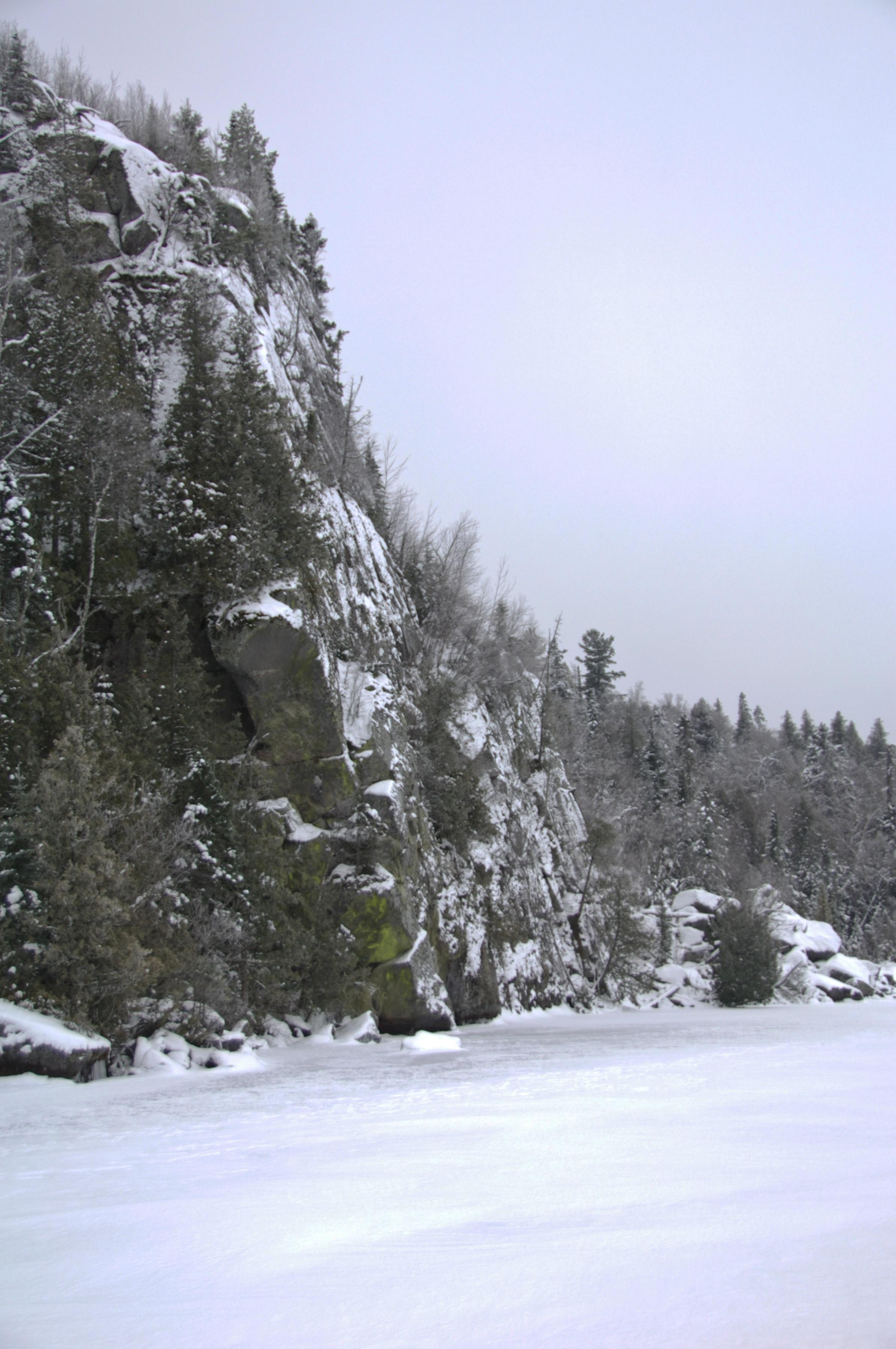 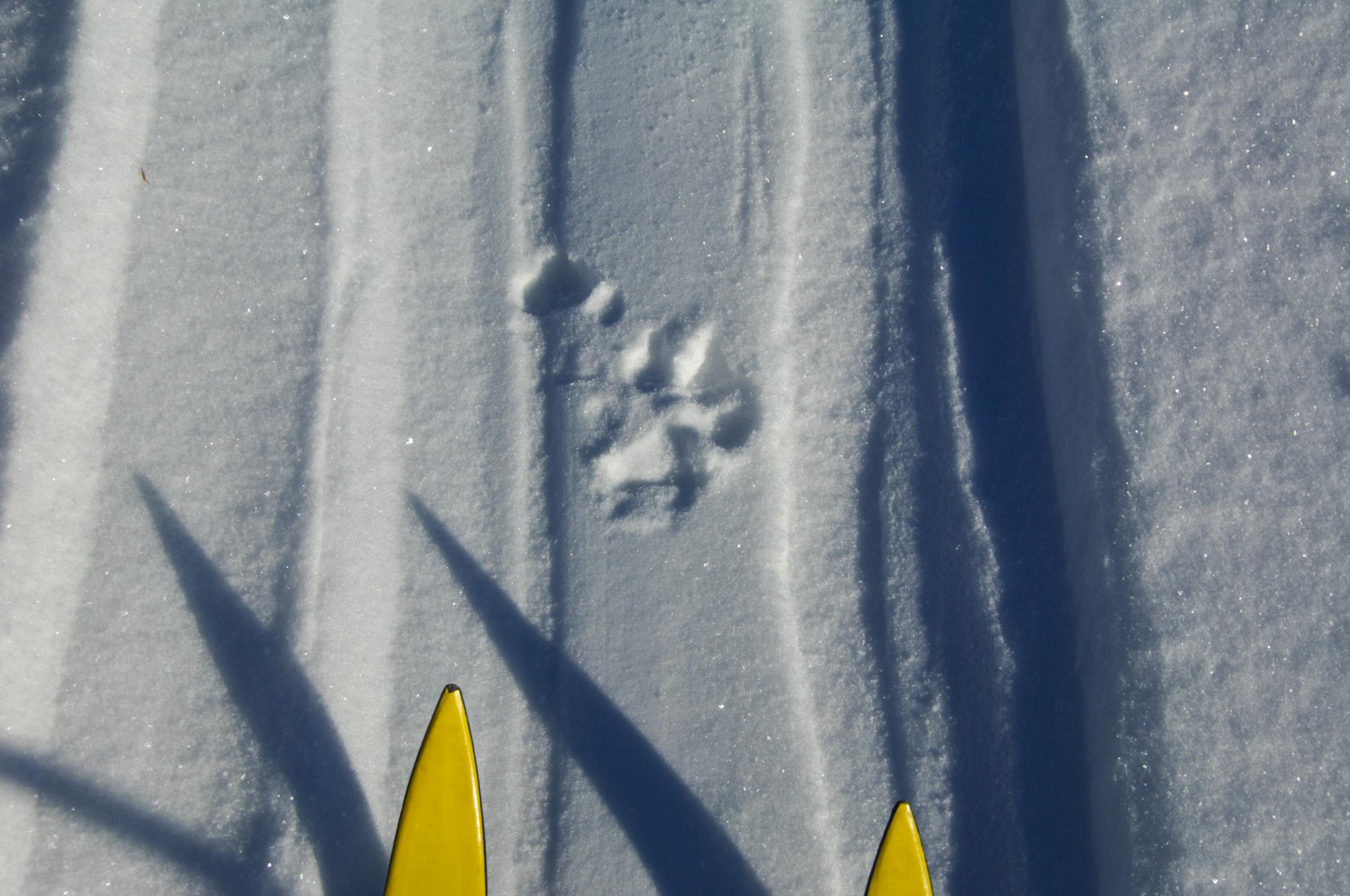 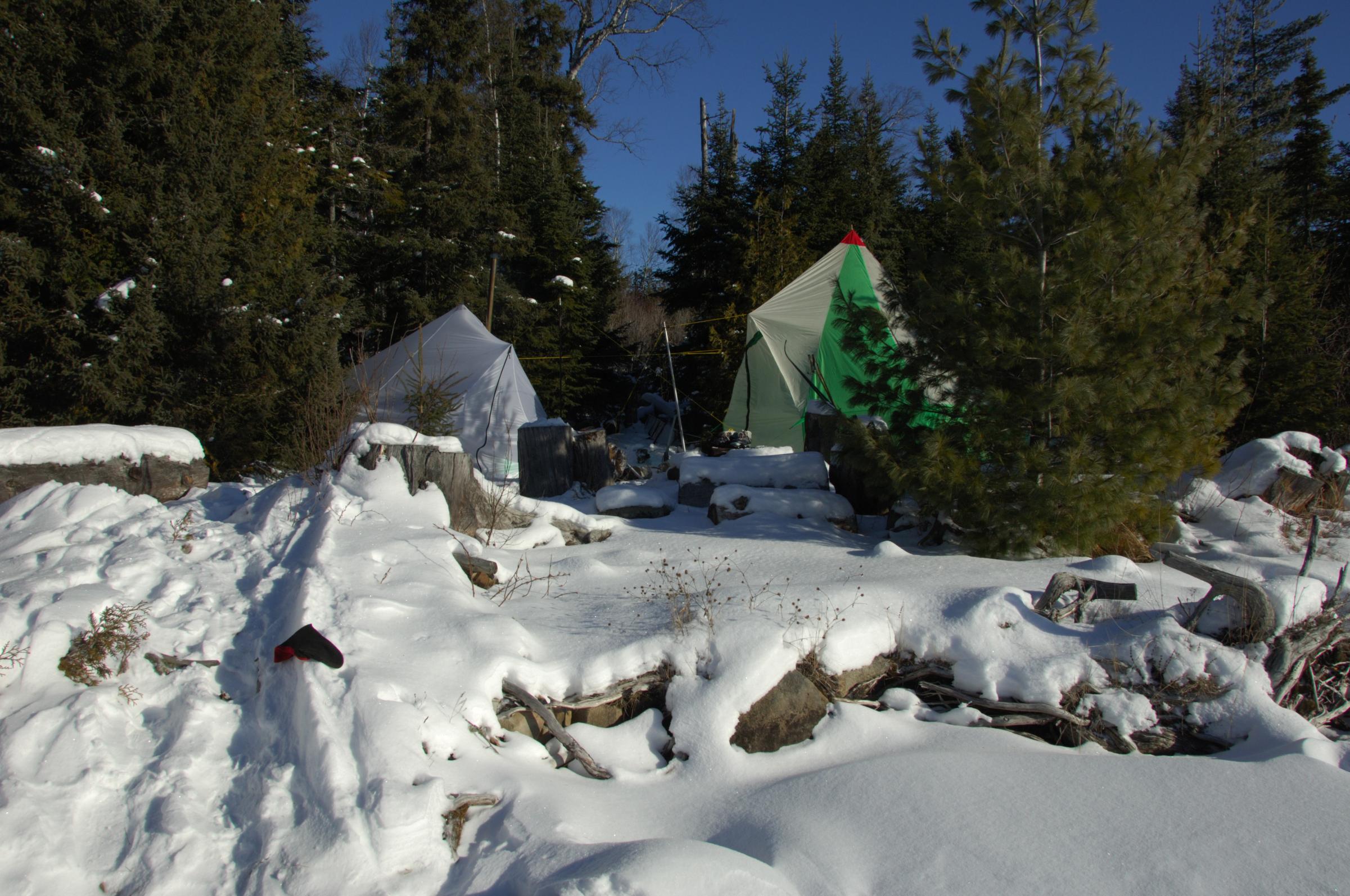 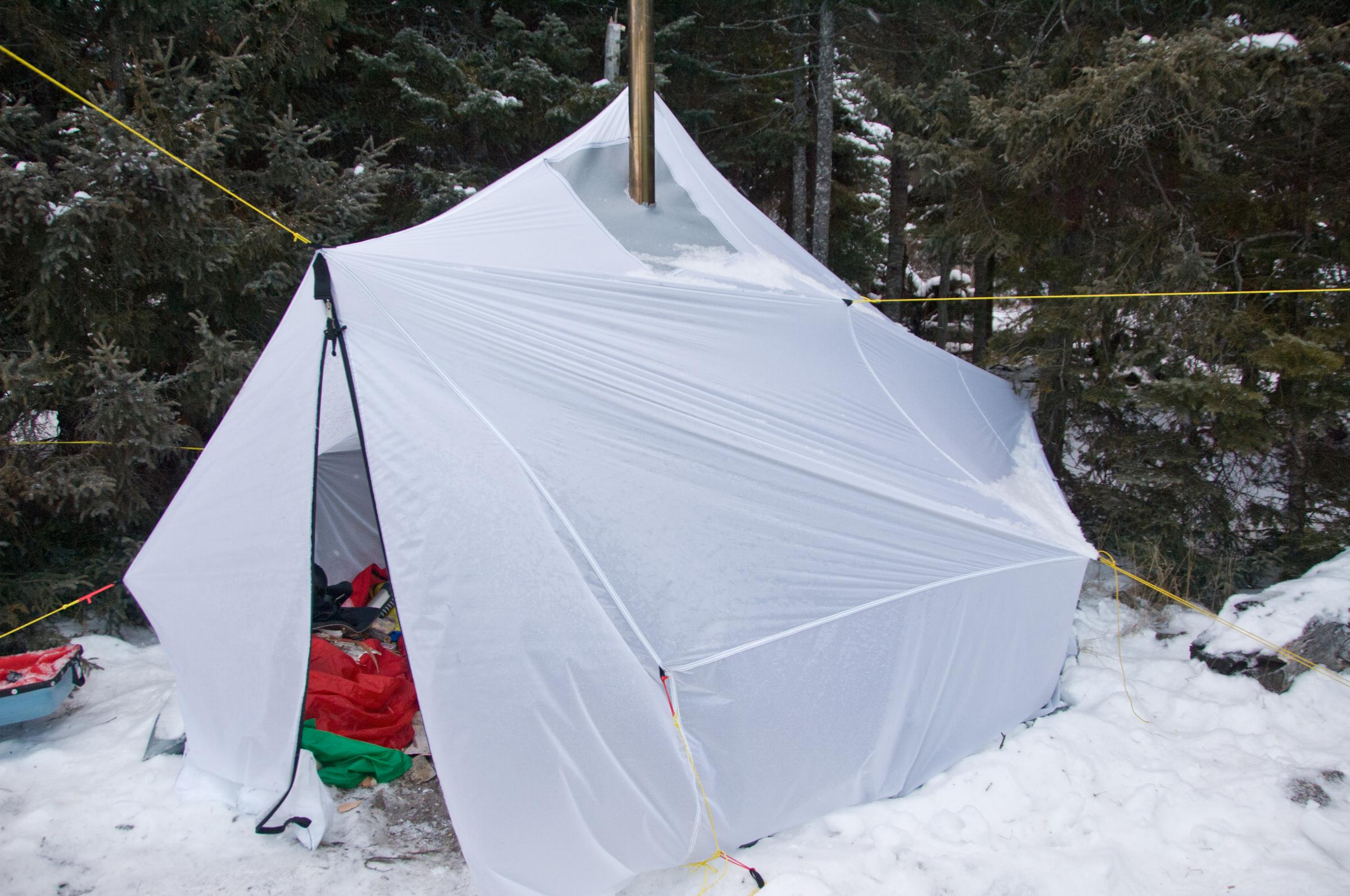 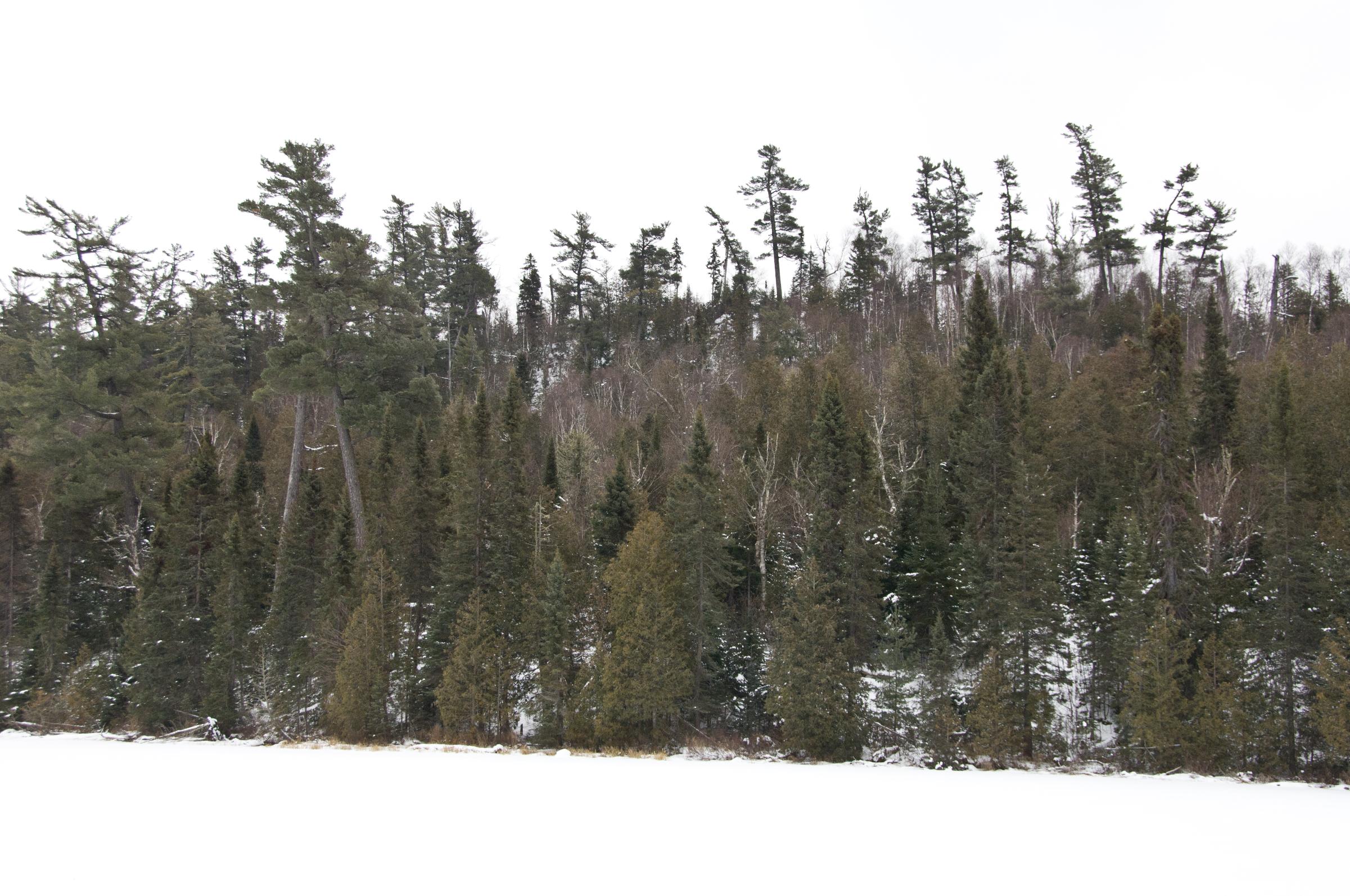 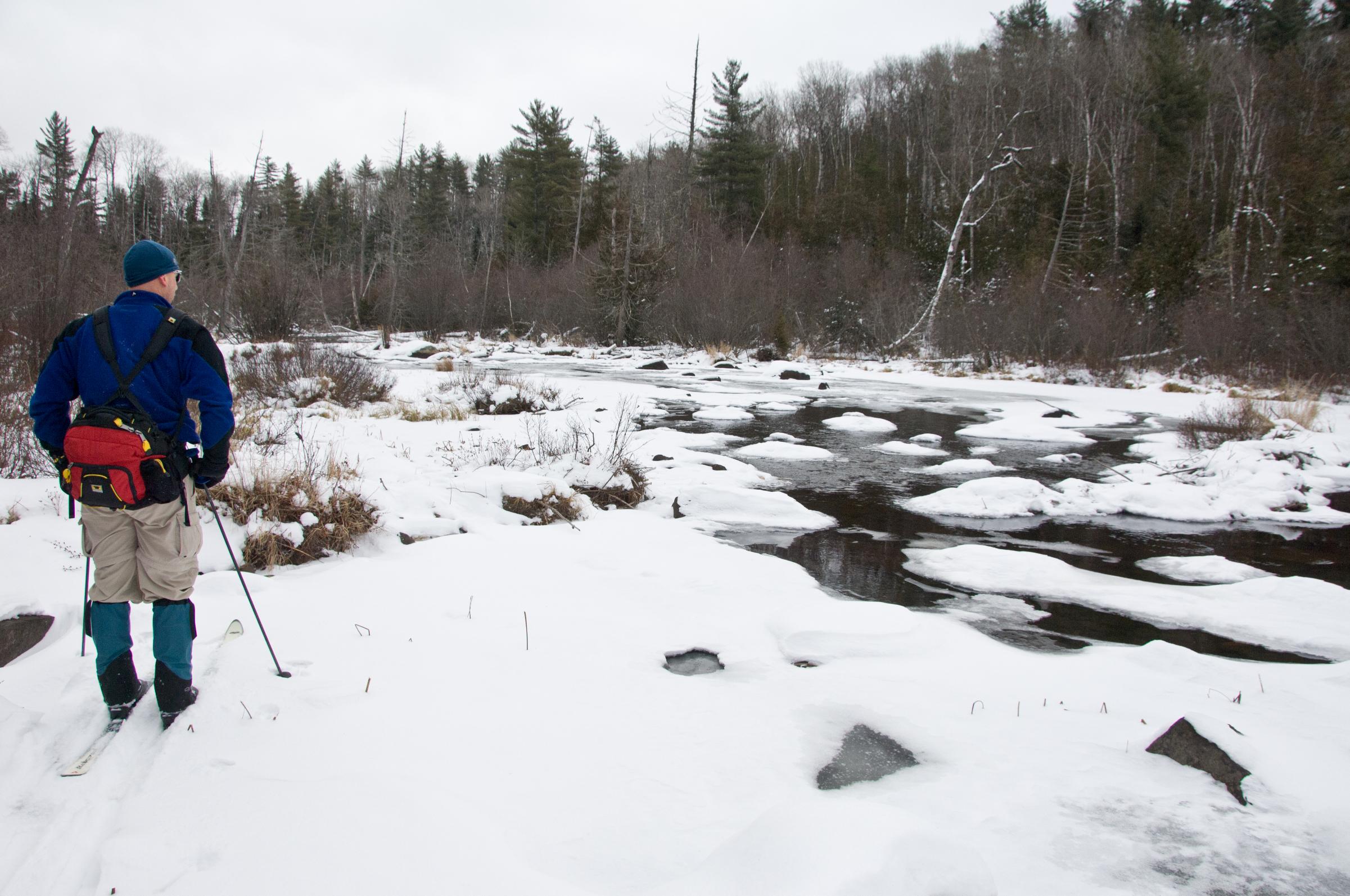 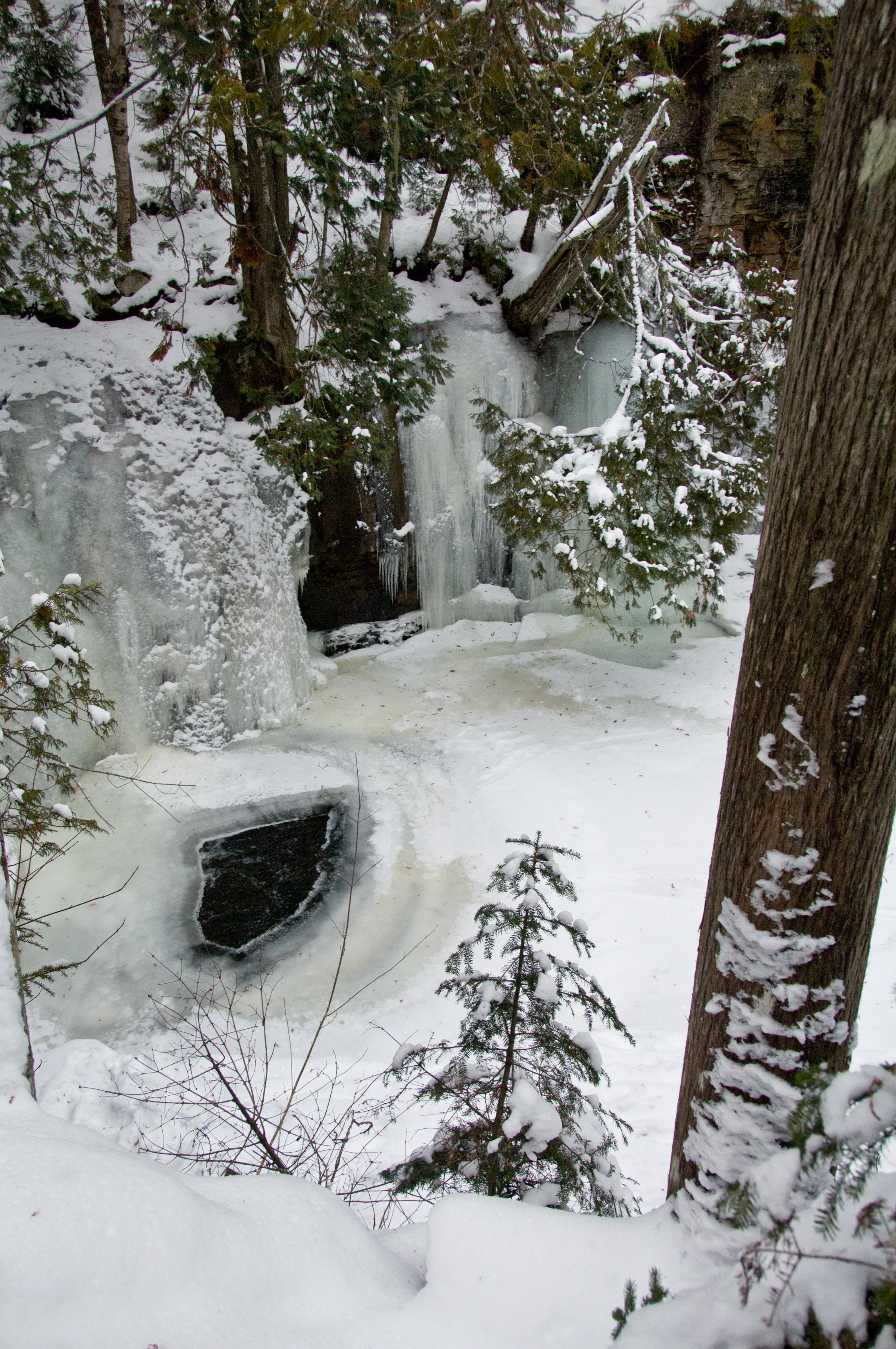 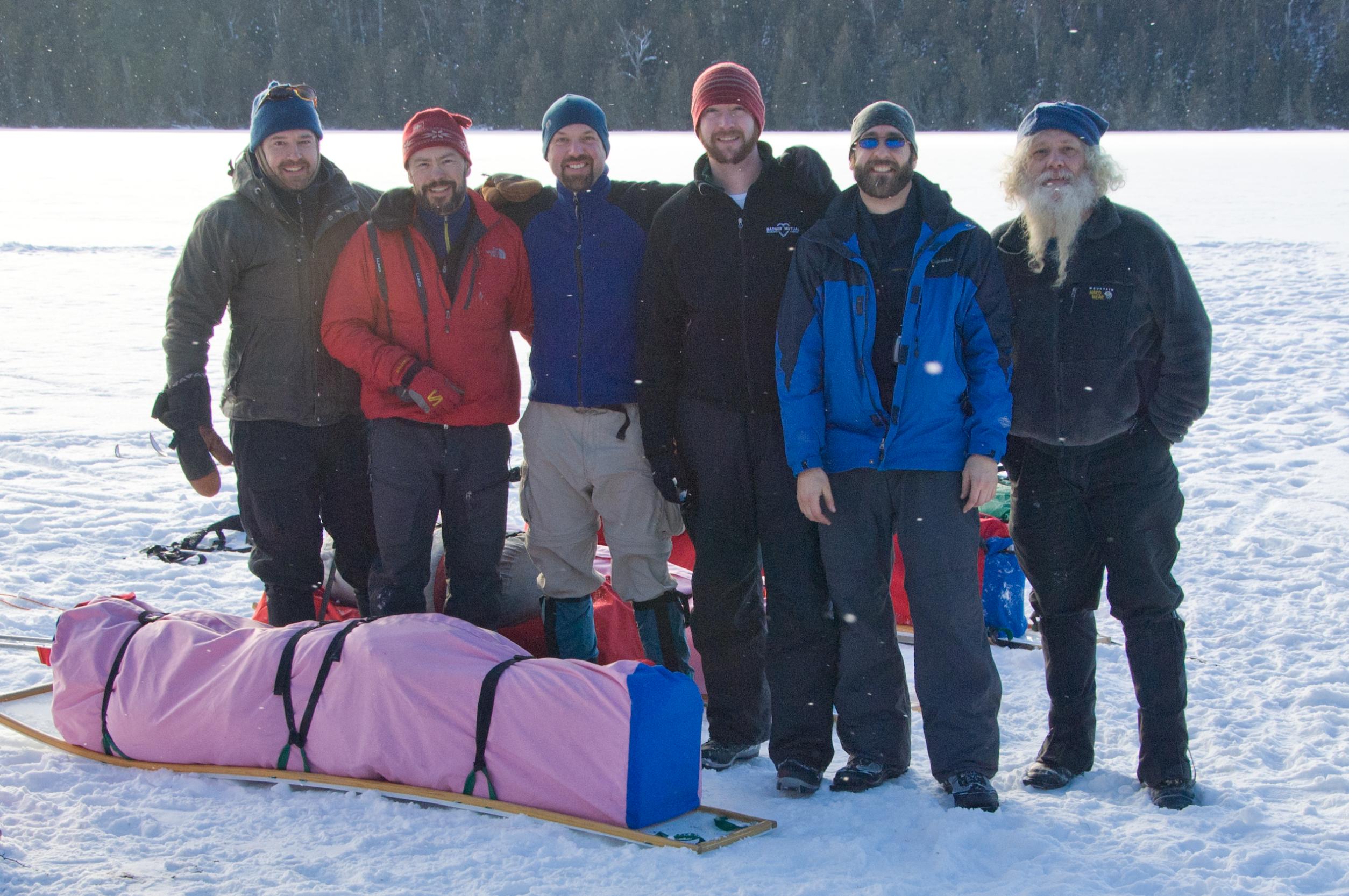