Trip Type: Paddling Canoe
Entry Date: 05/11/2013
Entry & Exit Point: Kawishiwi Lake (EP 37)
Number of Days: 5
Group Size: 1
Discuss Trip: View Discussion Thread (13 messages)
Day 2 of 5
Sunday, May 12, 2013 Got up at 5:30 and ate a big breakfast. I was staying at my wife's uncles home on London road so it was quick trip to Tofte to get my permit. I arrived at 8:15 and although the sign on the door said open 8 AM to 4:30PM 7 days a week May 1 to Oct 1, the door was locked. So I went around the building knocking on windows until I caught a rangers attention and she opened the door with many apologies. When I told them I was there to get my permit they looked at me incredulously and stated flat out "you can't go in, the lakes are completely frozen up". I told them I wanted to at least drive up and hoped to paddle the open water near shore. They laughed and showed me the weather forecast for Isabella, a predicted low of 26 for Sunday night. They also stated that they had flown over on Friday May 10 and there was no open water, all the lakes were "locked up". But after a stern warning that if they issued my permit I had to enter today, May 12, and hanging out in the parking lot until the ice went out was not acceptable, they told me to go watch the video while they filled out my paperwork. Then they asked me how many in my party? When I told them, just me, I could see they thought the forest service would be doing a rescue tomorrow. But I watched the video and answered all the questions and they issued my permit. So off I went, with 2 dozen nightcrawlers and a MPLS StarTribune Sunday paper purchased at the Holiday in Tofte. It is a really nice drive up to Kawishiwi lake from Tofte. I stopped several times at roaring streams to fish a bit, albeit unsuccessfully but I was thinking the longer I took to get to my entry point the more ice would be melted. Actually the entire way up to Kawishiwi I was thinking about an alternative way to spend the next 4 days and how this trip was going to be even lamer than Corndog's. But on arrival at the landing this what I saw 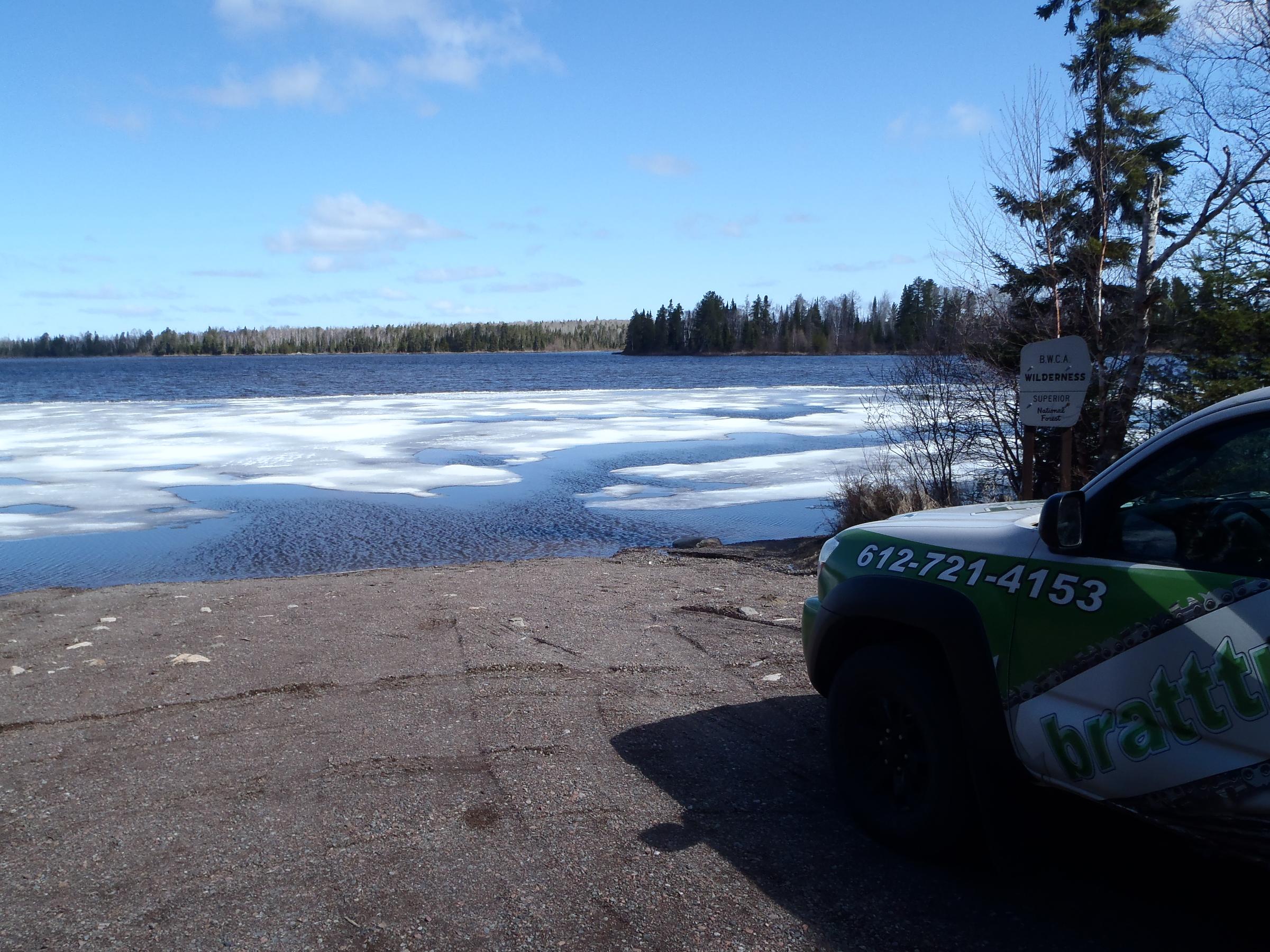 Open water!! But a lot of ice blocking my way. And some wind out in the main lake. And my camera battery went dead. Nonetheless I loaded up and parked the truck all by itself in the big lot and attempted to chop, paddle and slide to open water. This was unsuccessful and I scared myself enough to paddle back to the landing to plan anew. I was developing an appreciation for Corndog and his struggles. I walked to the point (west of the landing) to scout out a launching point free from ice but the wind was picking up so much I decided this was not a good option. If I launched to the west of the landing area I would at some point have to cross open water to get to the north side of the lake. The wind was now starting to howl from the north and whitecaps were breaking onto the ice sheet in front of the landing. There was a campsite to the east of the landing area and I decided to look for a trail leading to it. After a fruitless search I decided to bushwhack all my gear and canoe through the woods to the site. I was able to do this but it was only 40 degrees and the woods were full of snow and pools of melt. It was that time of year when the frost has gone out of the top 6 inches or so but all the melted snow has nowhere to go so the ground is like cold jelly and I got really wet bushwhacking to my campsite. Once I had all my gear to the campsite on Kawishiwi lake just east of the landing area I decided to wait awhile for the wind to subside. Then I decided to go back to my truck in the parking lot and get the Sunday paper. Once I got to the truck I decided to read the paper in the nice warm cab since I had already technically violated the return policy clearly explained to me by the rangers. While sitting there reading the paper it occurred to me that Corndog had actually made much more progress at this stage of his trip. So I threw the paper on the floor and bushwhacked backed to to my campsite. It was now 4 PM and the white caps were rolling in. But they had changed the ice in front of my site from a solid sheet to a slurry. So I decided to set up camp and fish. I was very thankful to have a ground cloth as there was no dry ground. No fish. I made supper and went to bed. No fire, way to windy. But I really enjoyed my new little chair I bought at REI after reading about it at BWCA.com Early to bed.