Trip Type: Paddling Canoe
Entry Date: 06/03/2013
Entry Point: Mudro Lake (restricted--no camping on Horse Lake) (EP 22)
Exit Point: Mudro Lake (EP 23)
Number of Days: 7
Group Size: 4
Trip Introduction:
We drove up to Ely on Sunday June 2nd and got a Bunk at VNO. Very nice accommodations, Lynn was friendly as usual. We picked up our permit and PMA at the forest service, the ranger at the forest service was telling us that the sturgeon up by lower basswood falls were spawning and at times they will porpoise, up to 5 feet out of the water he said he had seen it once and it was really cool, but we never were able to witness this, but it would have been neat.
Discuss Trip: View Discussion Thread (22 messages)
Report
Day 1--- 18 miles and 10 portages, We were up at 5am ready for our adventure, it was 33 degrees but a beautiful sunny morning the forecast was light and variable winds and a high of 64 degrees. We were at Mudro by 5:45 am and on Pickett creek at 6:15 the water levels were high enough that we didn't have to portage the first 30 rodder we just floated down the creek. 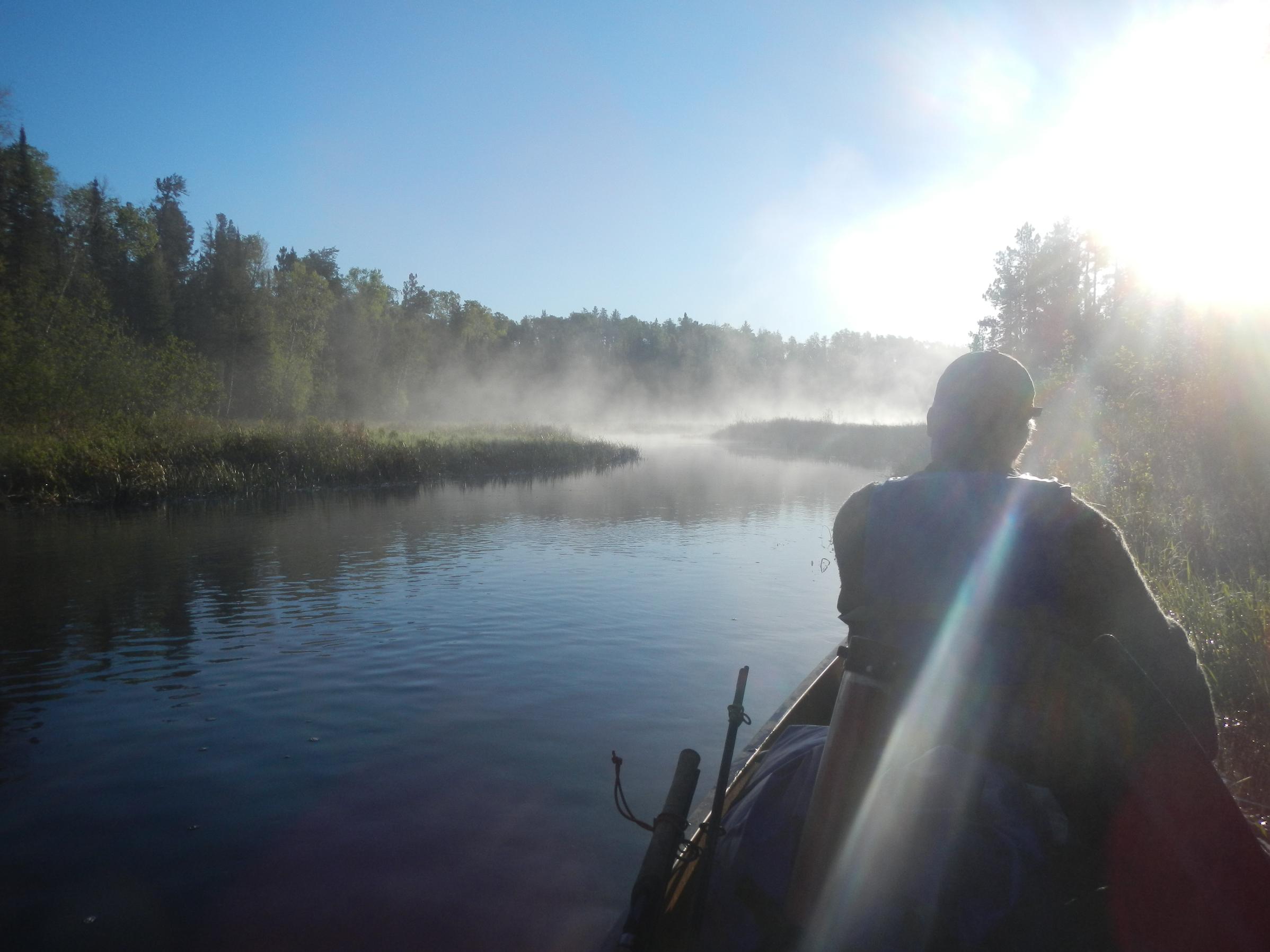 We made it to our first portage going to Sandpit quickly. I was nervous about this 80 rod portage, I had heard bad things about it but it wasn't bad just steep at the end. It would have been alot worse going towards Mudro. Next was Tin Can Mike it's a 160 and flat and easy plus some cool boardwalk areas on it. 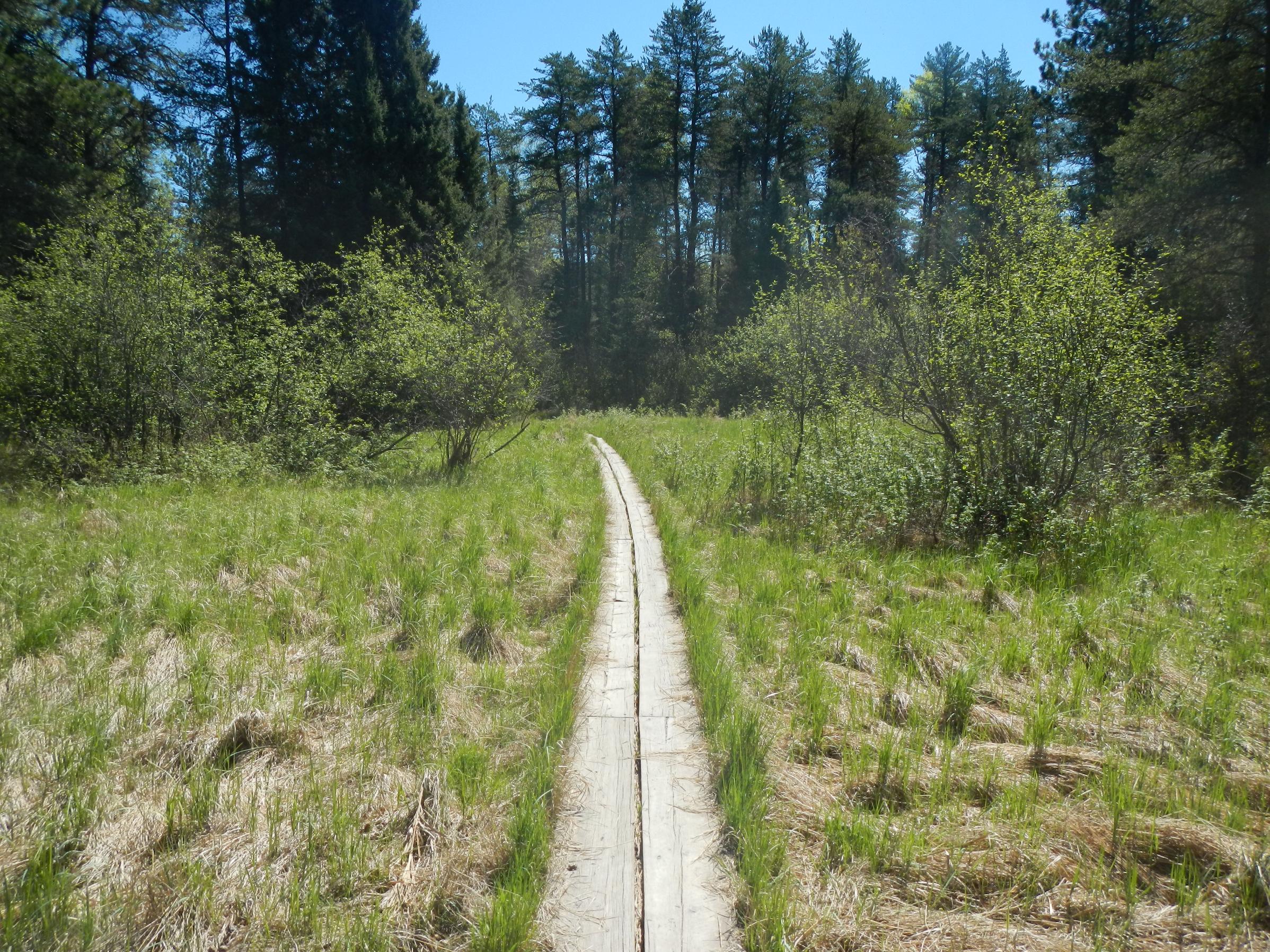 We then headed on towards Horse lake, Horse river and Lower basswood falls. There are 3 portages on the Horse River. River levels were up and it was an easy and enjoyable morning 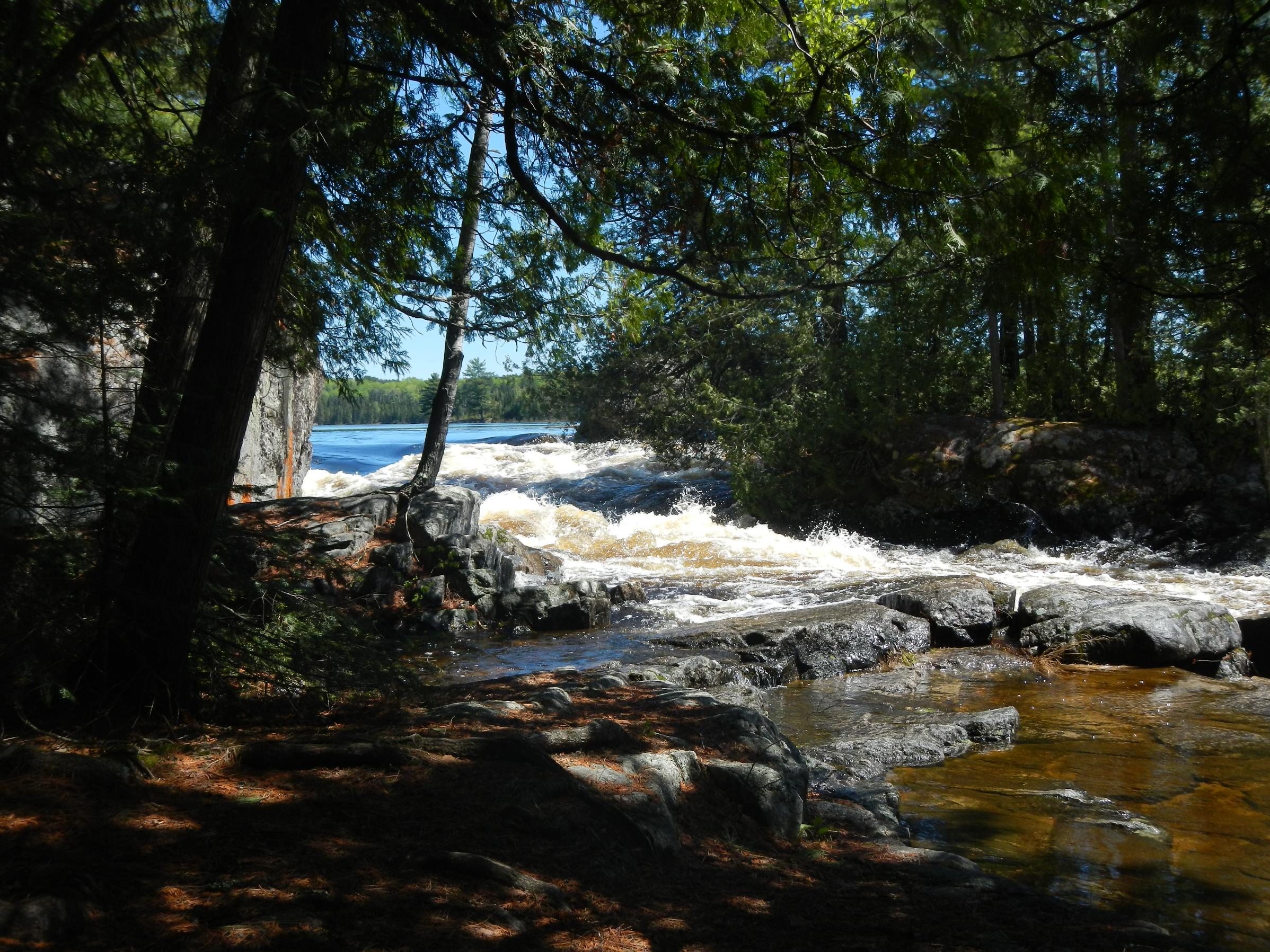 .
Then it was on to Lower Basswood Falls. The falls was really roaring we took extra caution approaching due to the current, but it ended up not being a problem, quick 12 rod portage and a stop at the falls for pictures and we were on our way.
Now we were on crooked and felt pretty good it was only about 1pm and we thought we'd make it up towards big current. It was pleasant paddling very little wind and not many people. We stopped to see the pictographs and table rock. The water temperature was still pretty cold about 55 degrees, we trolled a little but had no luck. We stopped for a bathroom break at a campsite and caught a walleye on a floating jighead. 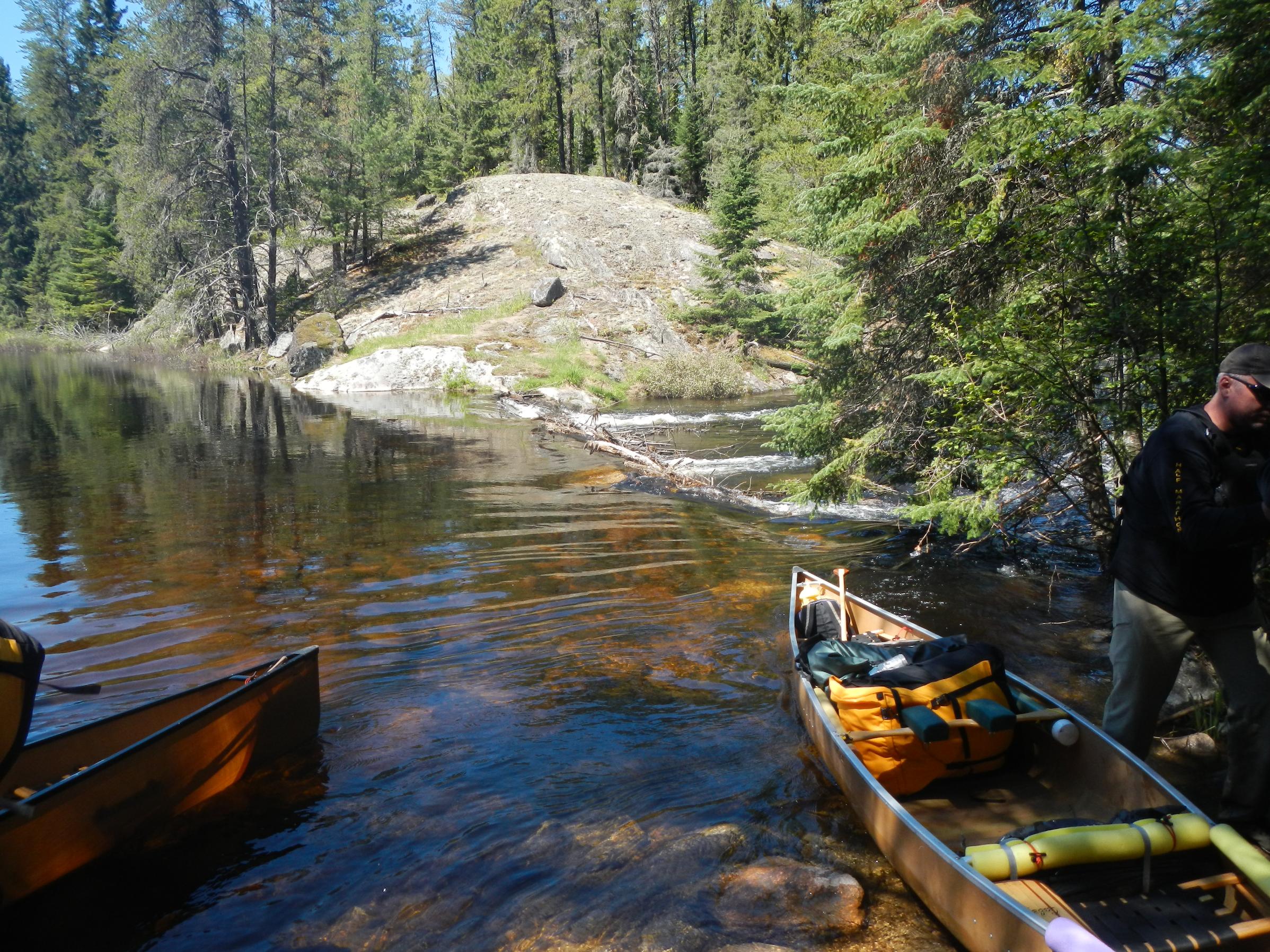 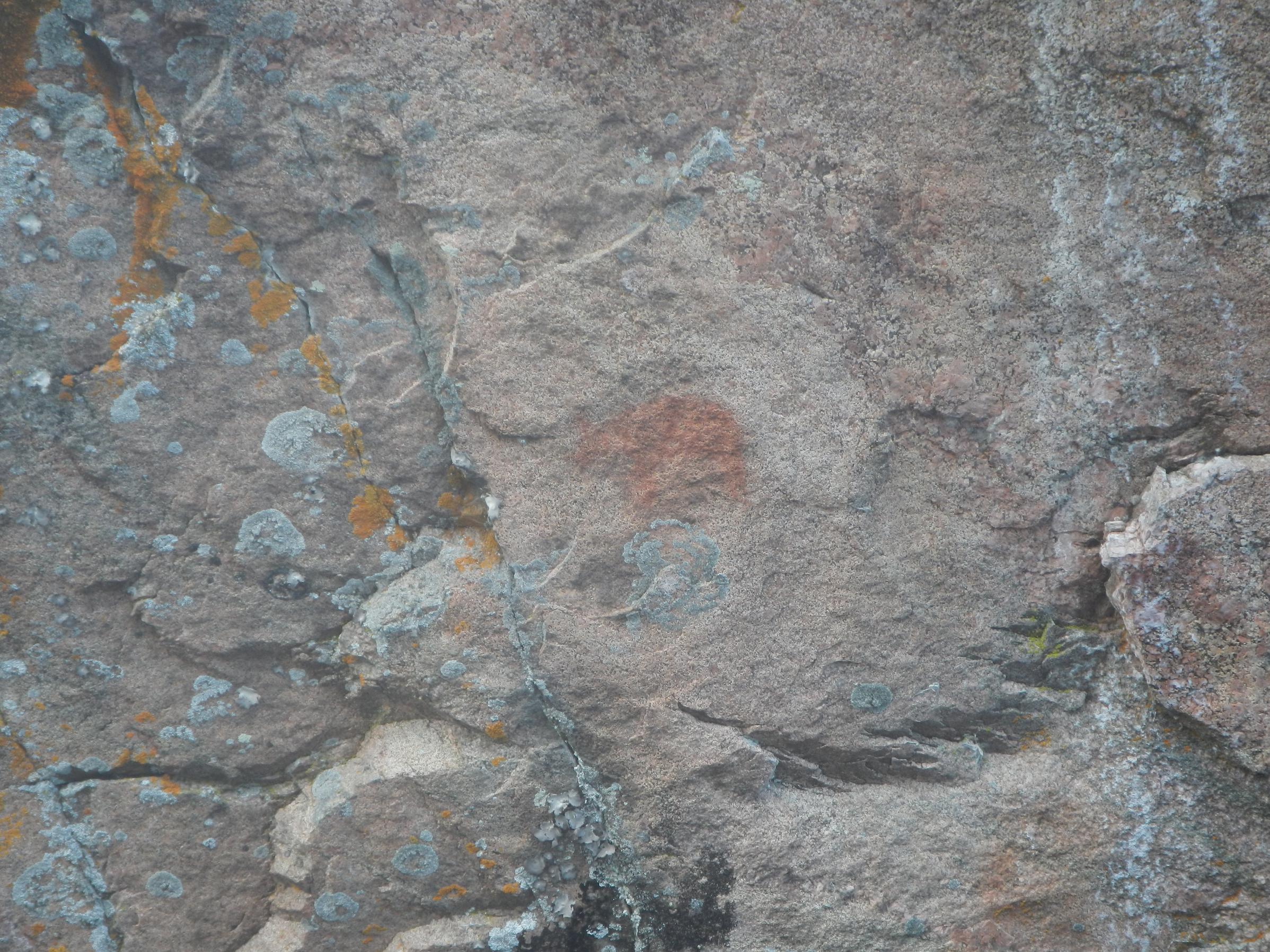 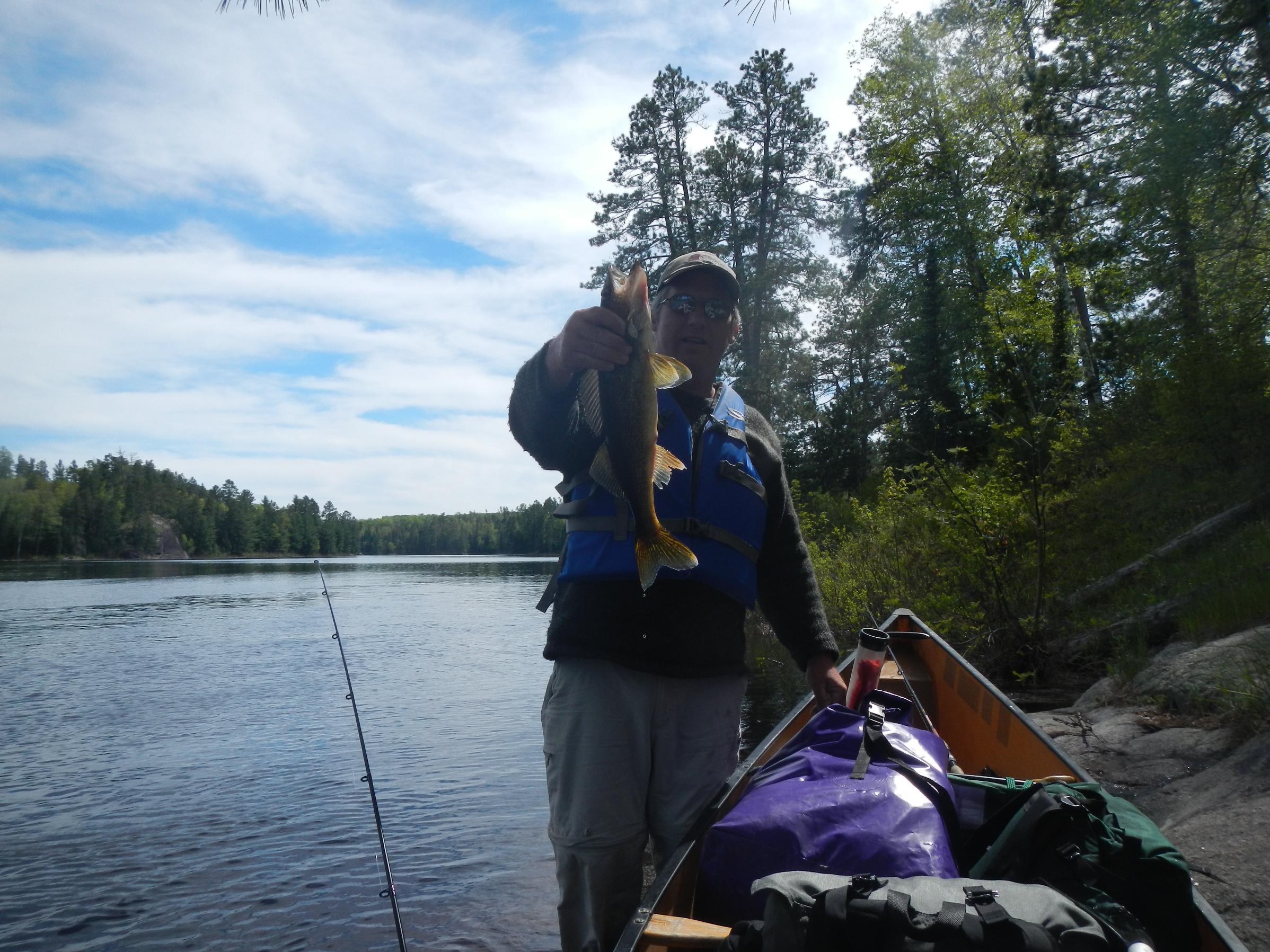 We made our way down towards big current and camped just south on a very nice campsite probably a 4 star, the latrine was a bit swampy otherwise it was a great site. We settled into campsite and had baked walleye, maple deer sausage and some wine for supper, overall it was a very long but pleasant day. 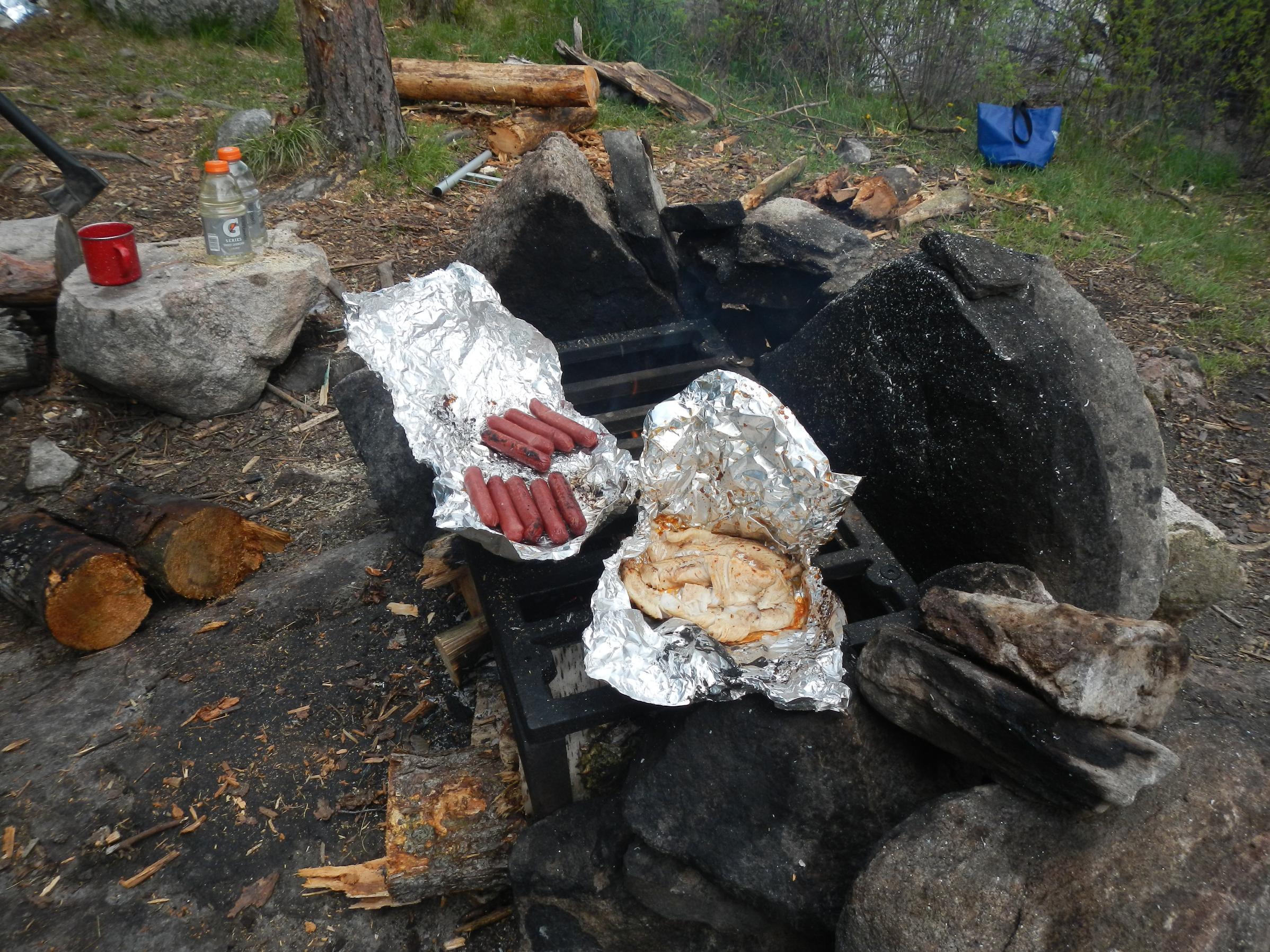 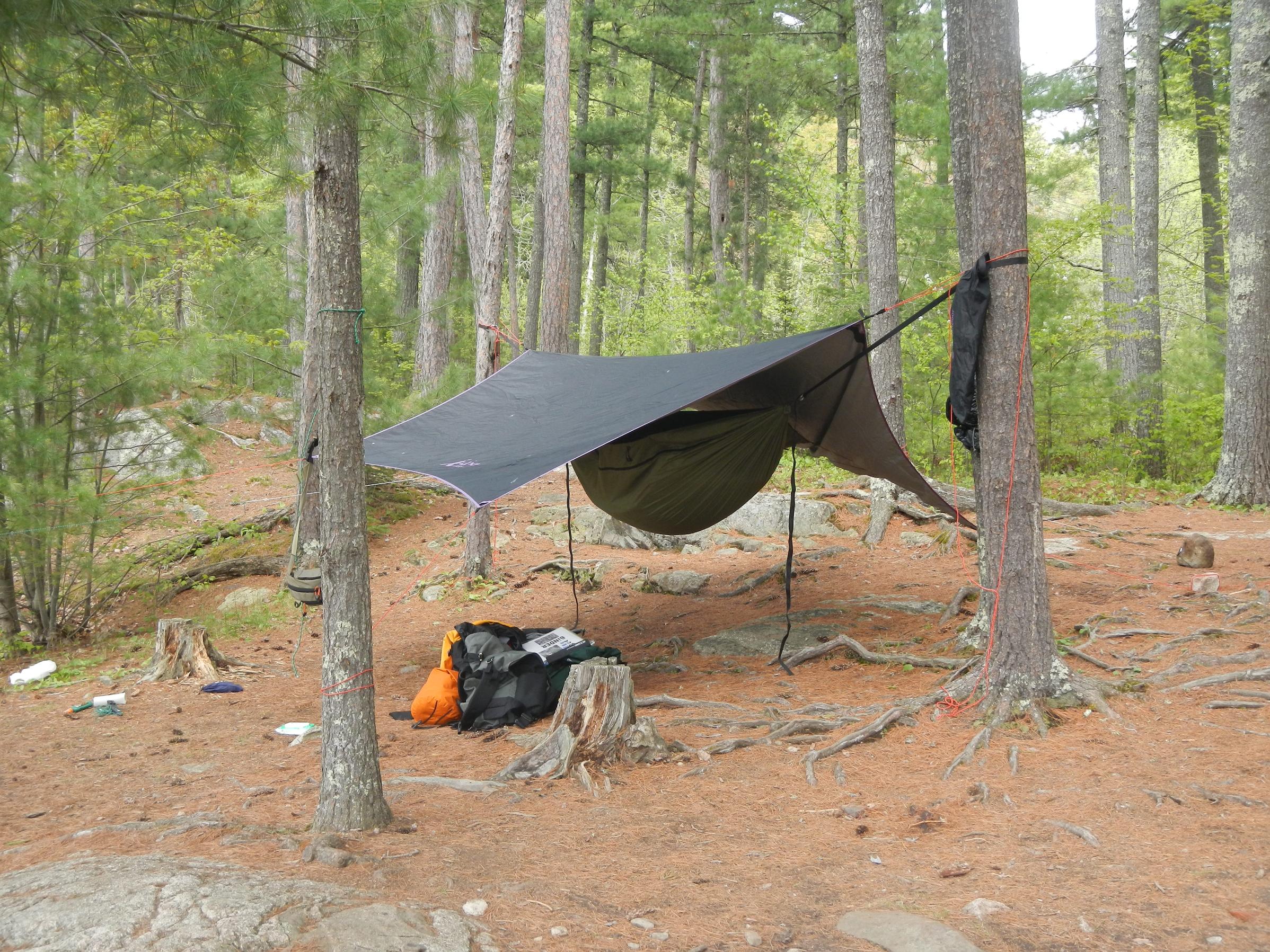 Day 2----Cool temp's in the 50's overcast winds around 15 mph. The black flies are out but the breeze is helping. We go out and fish but it's pretty slow a few walleyes and smallies. We did catch a nice walleye right at camp, about 28" nice thick fish, we also caught plenty of eaters for supper. 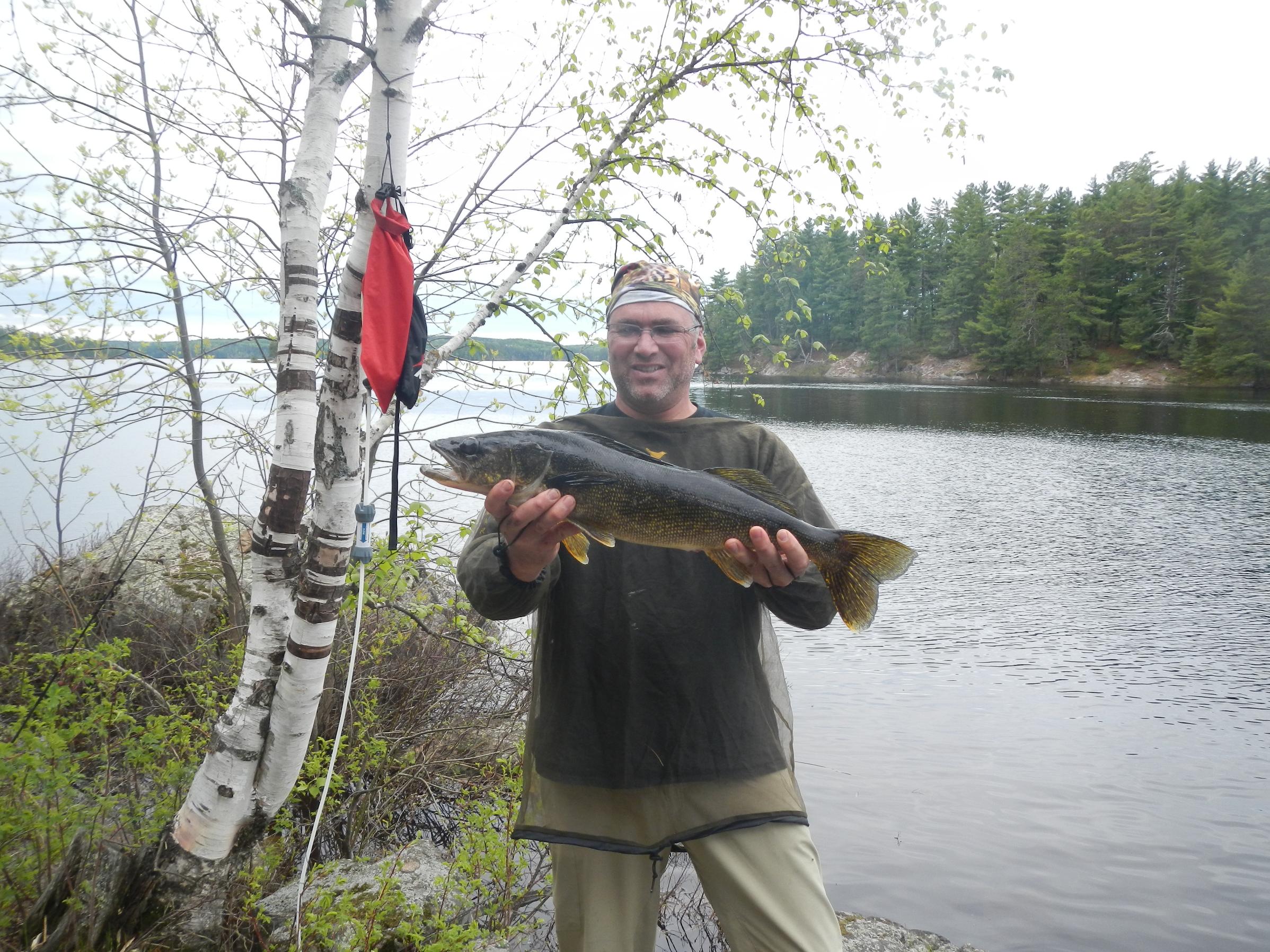 Day 3---- 6 miles no portages, we decided to move west on crooked lake towards Saturday Bay thinking that Saturday would be warmer, which after the fact turned out to not be true. Again it was cool in the 50's with a wind about 10-15 mph out of the ESE, which made for a easy couple of hour paddle. We stopped north of the question mark island in Friday Bay and checked out the old truck in the woods just off of shore. 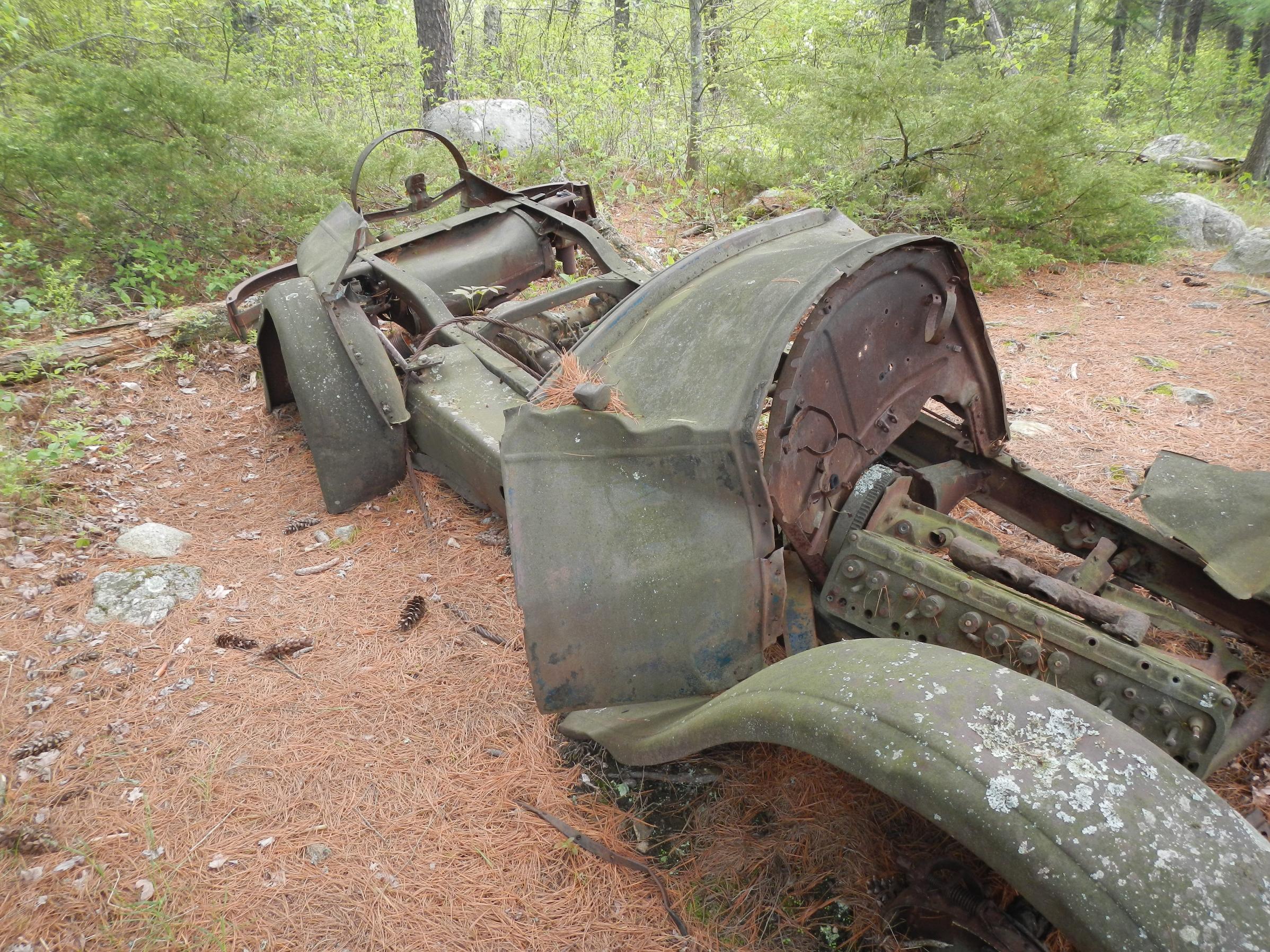 We got to the island campsite just to the north of the entrance to Saturday Bay around noon. It was windy and there were a couple of sprinkles going on so we set our hammocks up and took a few hour nap, which was really nice. This campsite was wonderful it had big old pines with no undergrowth up on a hill behind camp prefect for hammocks or tents for that matter. 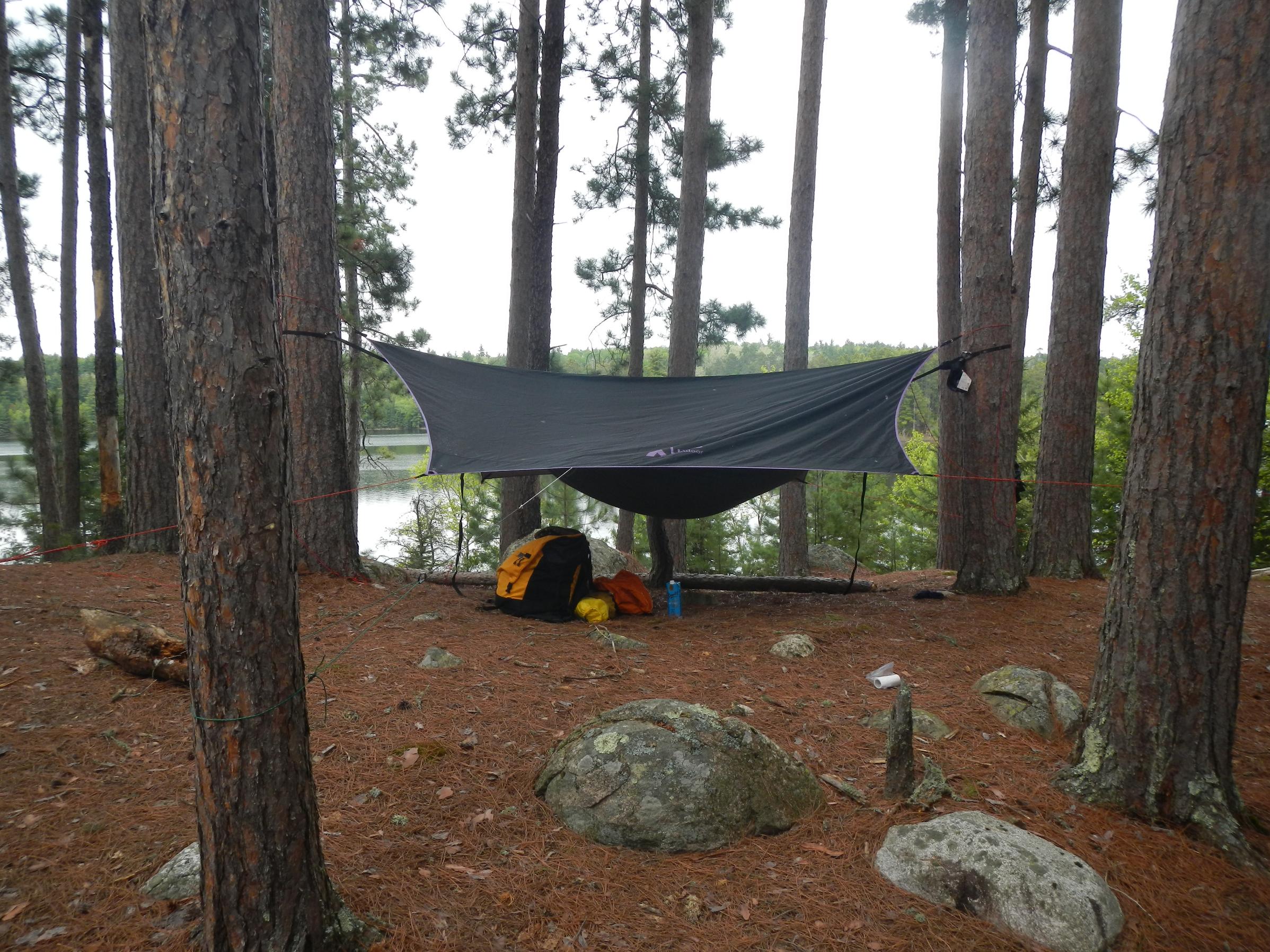 The northside of the site was perfect for fishing there was current moving through and the water went from about 8 feet to 30 feet. We caught nice walleyes, smallies and big pike here it was really a bonus to have such good fishing right from shore. 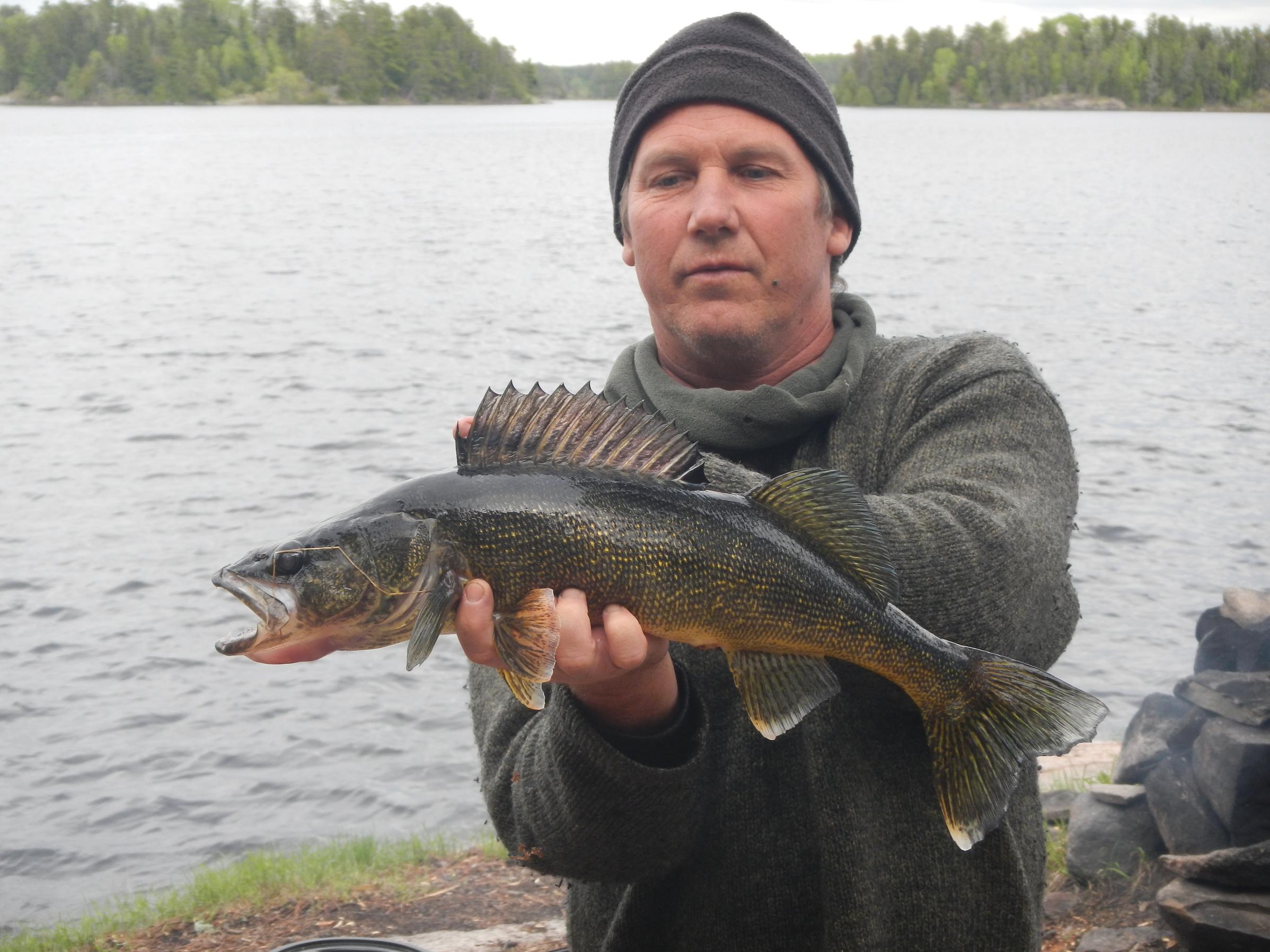 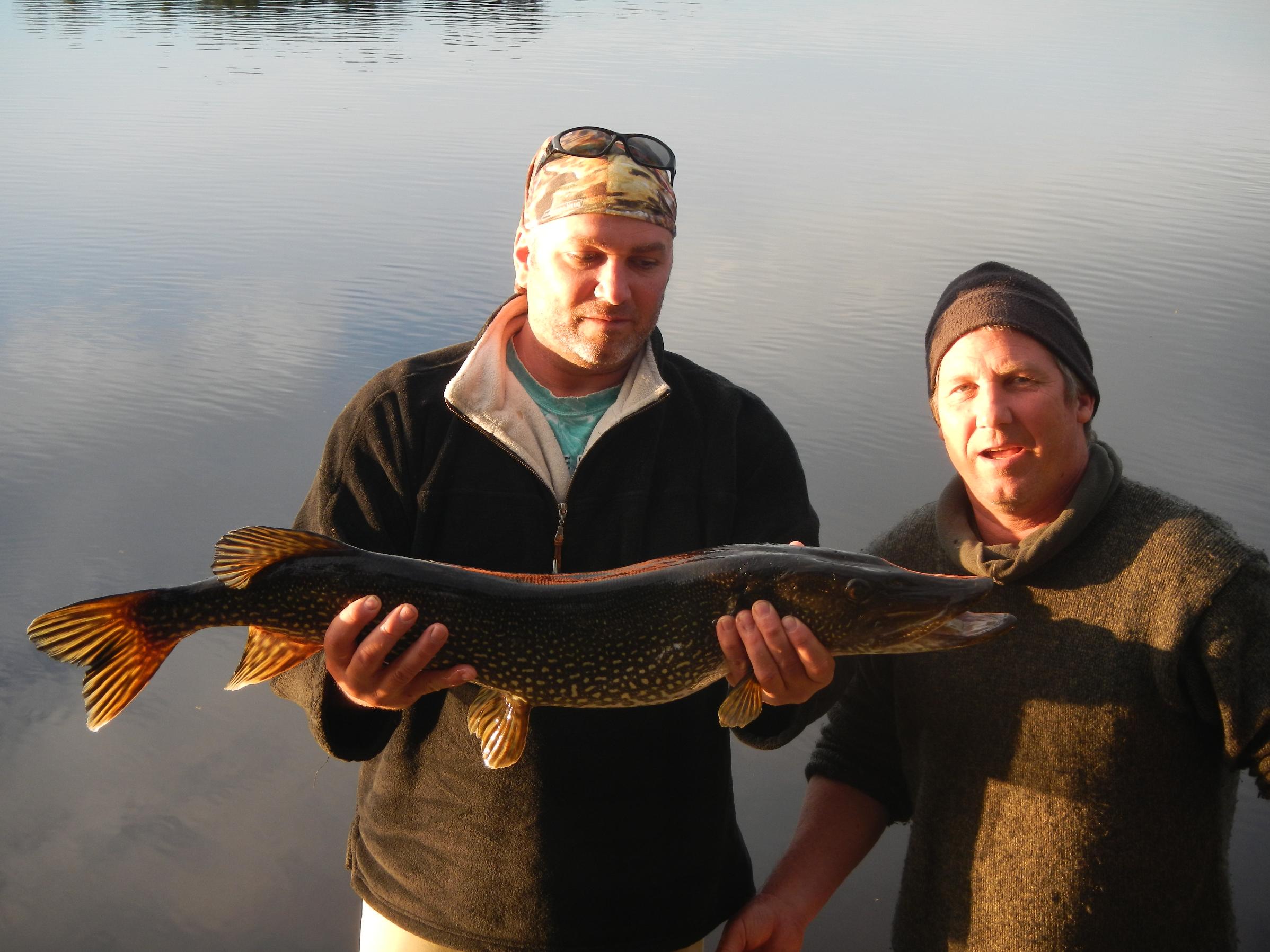 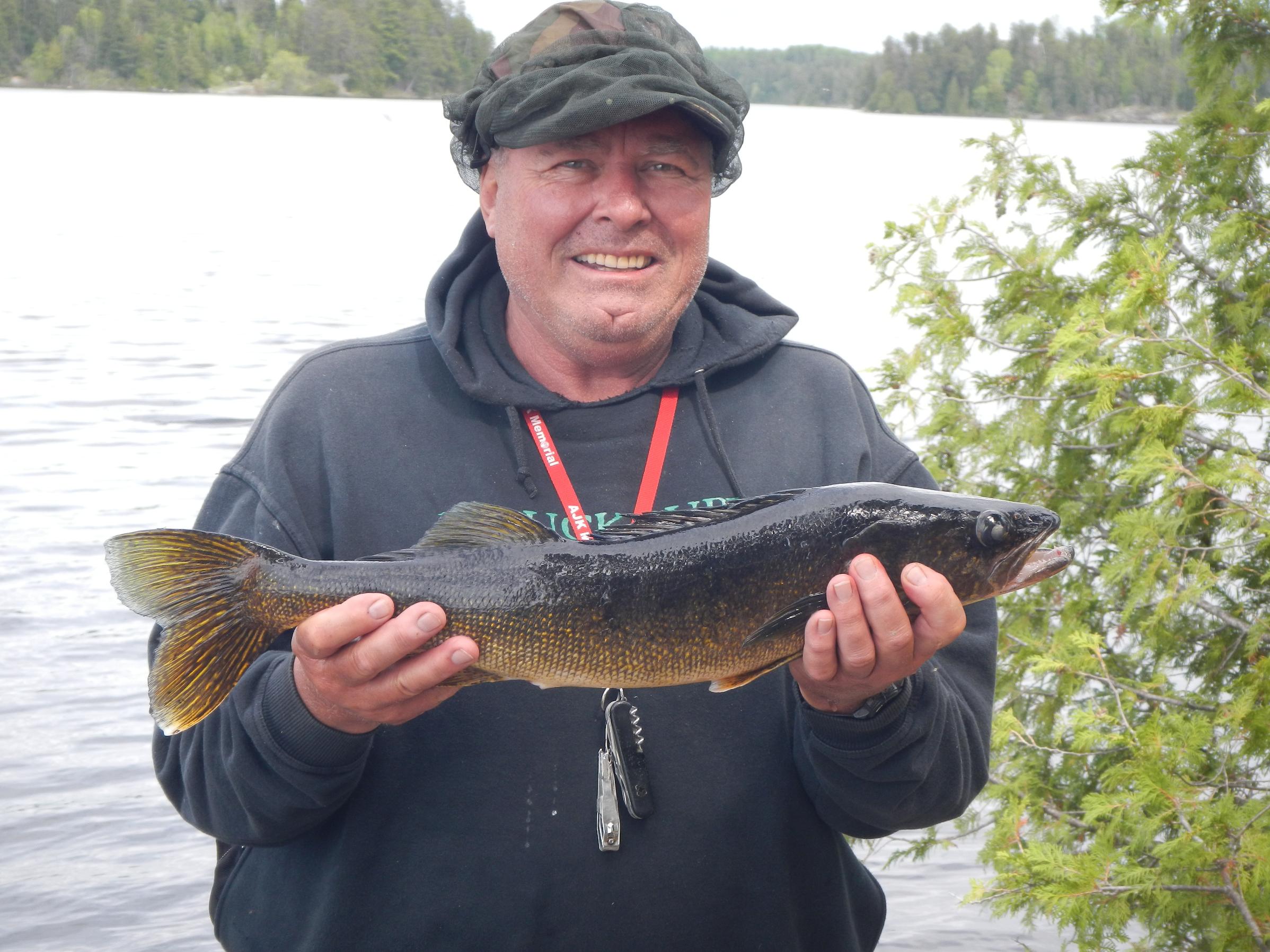 It was crazy good fishing here, in fact alot of the fish we caught here were too big to eat, 22",24",25",27" walleyes or big pike. We headed into Saturday Bay and the water was still only 55 degrees caught a few 18" plus smallies and some pike but generally slow in the bay. In fact one afternoon my buddy was fishing he walked over to camp to get a drink and when he came back his pole was gone, we looked out about 10 feet from shore and the tip of his fly rod was sticking out of the water. I snagged his pole and the fish was still on it. He only had 4lb test on his reel and fought the pike for quite a while before landing a 37.5 inch pike it was amazing to watch and I got most of it on video. Overall it had been a good few days at our second campsite and on the final night here right after dark it seemed that every loon on the lake were going nuts it was loud and cool to listen to as I lay in my hammock. 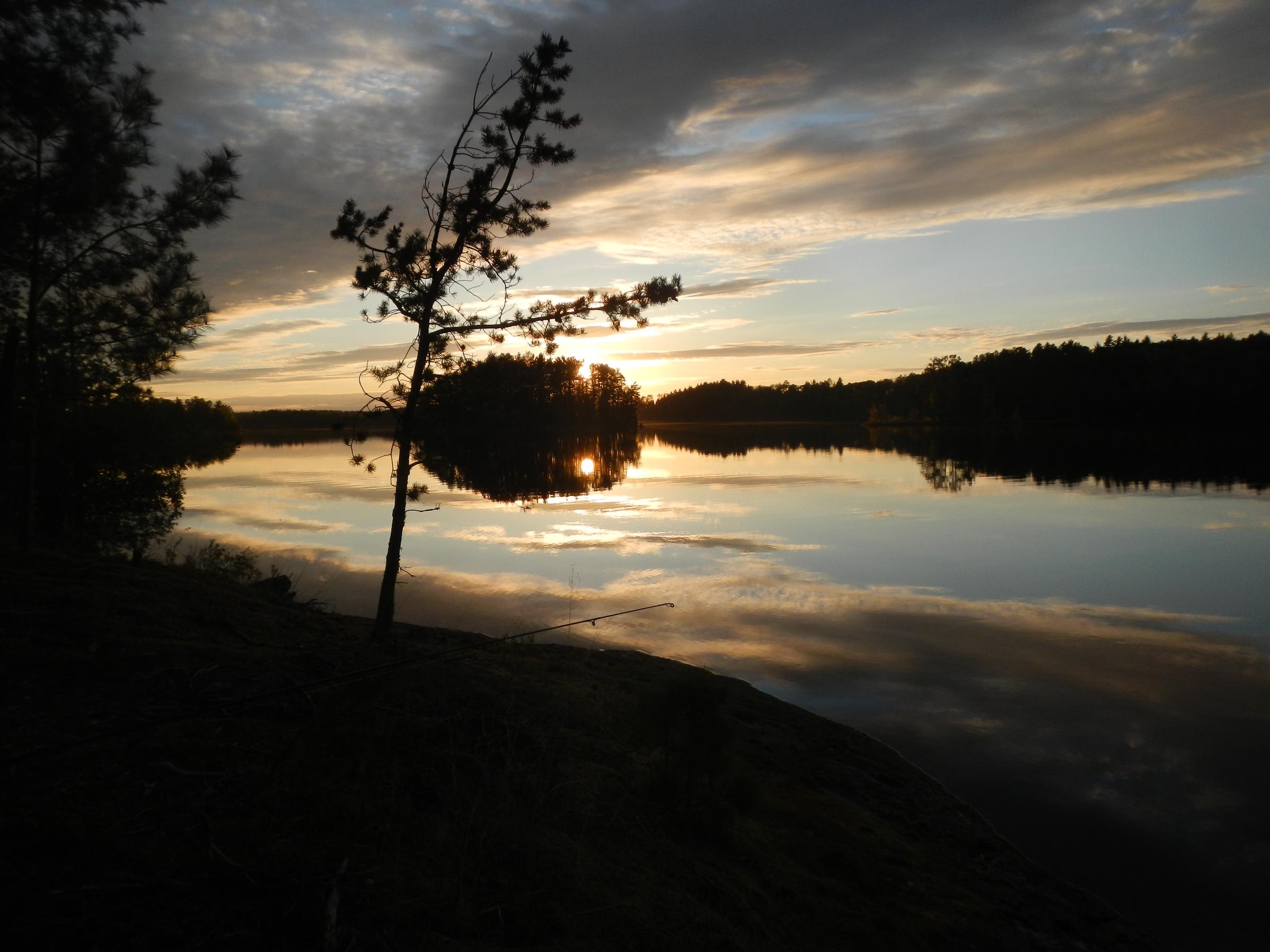 Day 5 Heading to Sunday lake. 12 miles and 5 portages. We were up early for our trip to Sunday. We traveled west to Curtain Falls and Made the 140 rod portage, Curtain Falls was really outstanding to see. 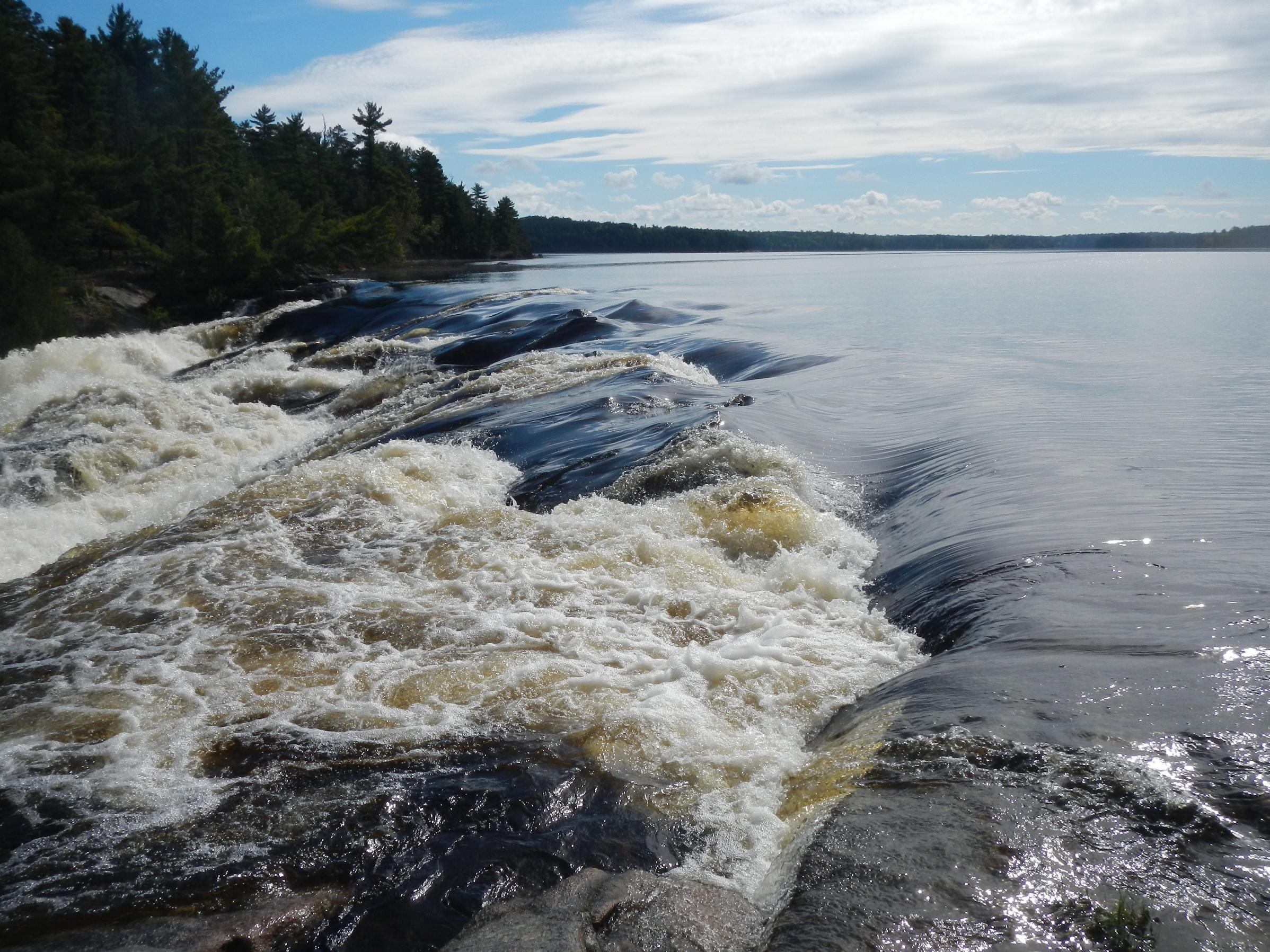 On towards Peterson Bay we went, we had been on trips here in the past so we fished a little. We were throwing twister tails mainly orange and we nailed the walleyes and crappie all in about 8 to 12 feet of water. 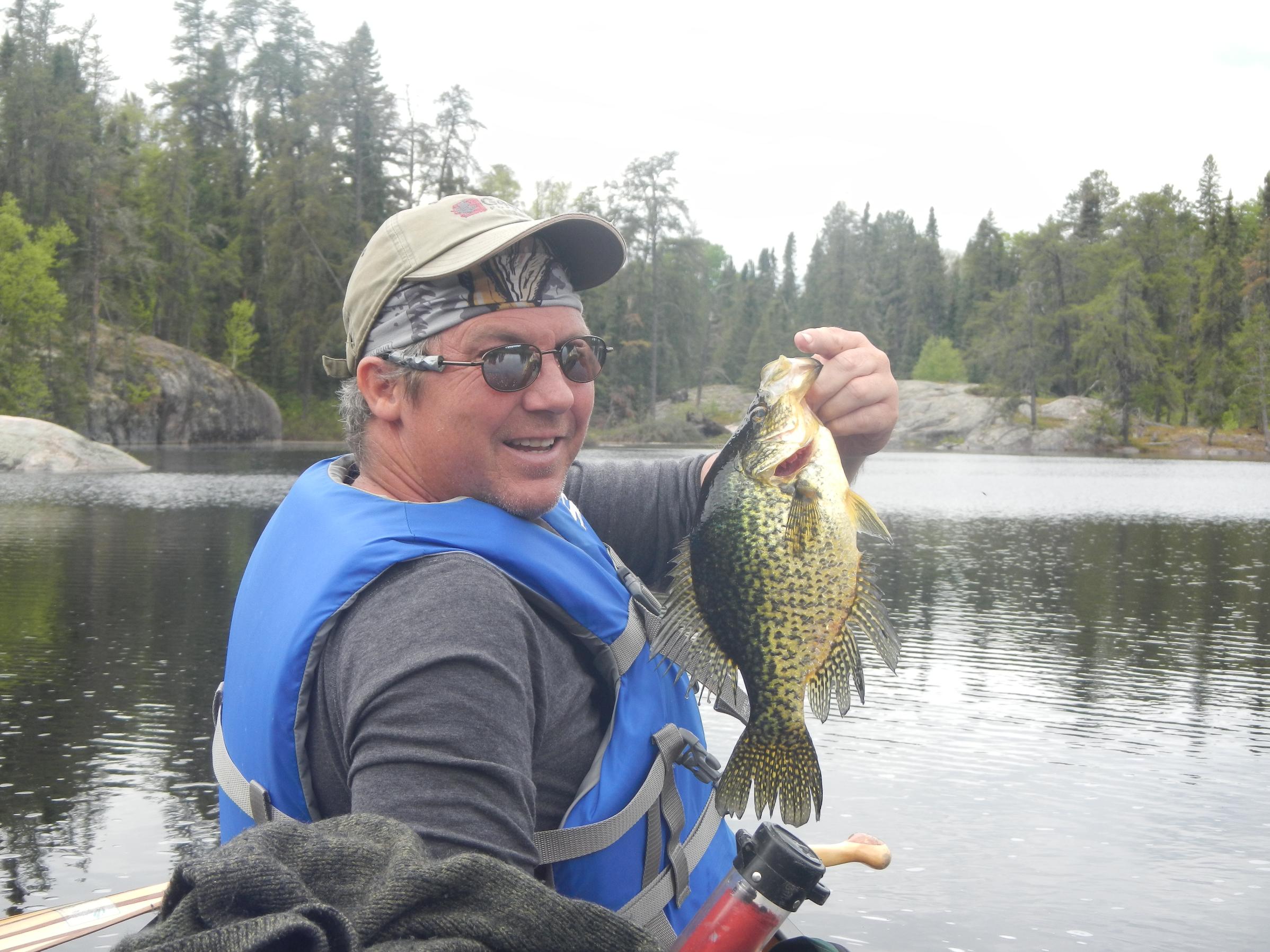 The landing to the 75 rod portage to the beartrap river is very steep and a tough one to unload your gear on. It wasn't a terrible portage as PMA unmaintained portages go. By now the black flies were out in force. Now we were on the beartrap river. Water levels were good and all we had were a 30 rodder and 2 10 rodders and we were at Sunday Lake. 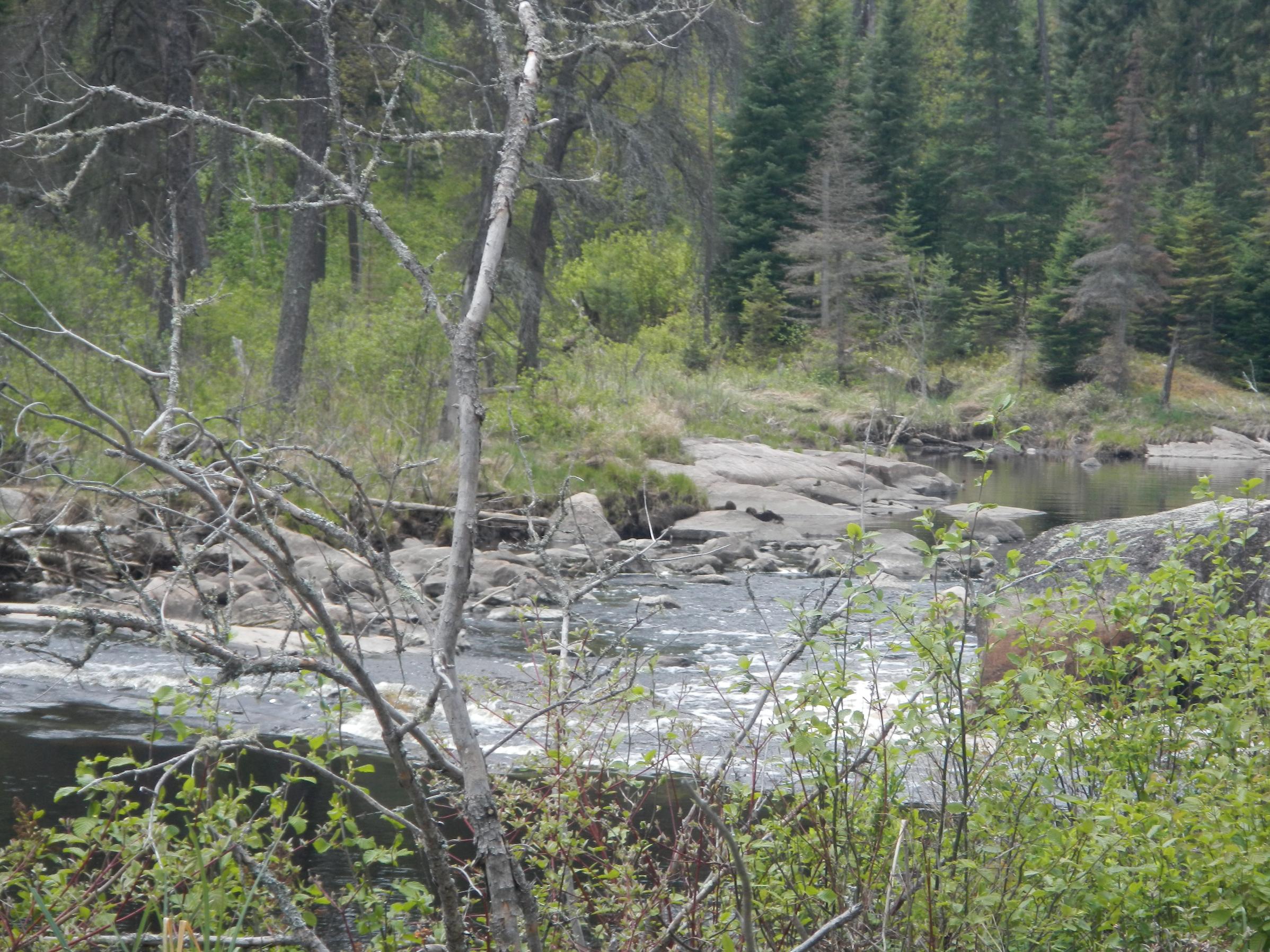 We camped at the old campsite on Sunday Lake, it's a nice site we caught walleyes and pike right at camp, I even caught a sucker. We were hot and I tried going for a swim but the water was still too cold for me. We had baked walleye, mashed potatoes and stuffing for supper. We had a couple of drinks around the fire we called them the blue walleye, it was blue kool-aid and vodka but the tasted pretty good. 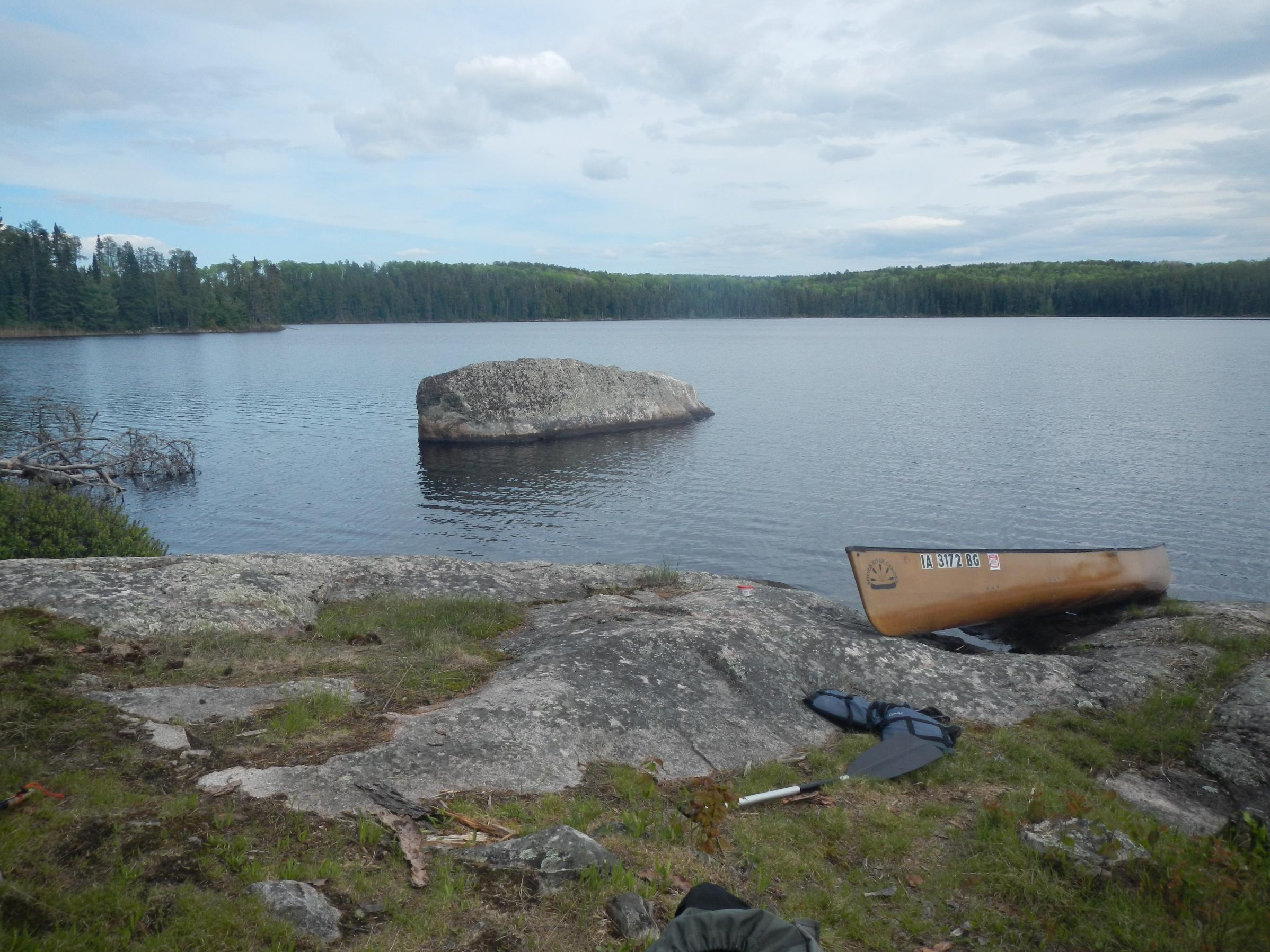 Day 6 Sunday lake to Gull Lake 5 miles 4 portages. This was a tough day. The beartrap river south of Sunday is much narrower then above. There were at least 10 beaver dams most were blown out the rest were fairly easy to push through. The first portage said it was 75 rods but it seemed much longer lots of rocks and roots " couldn't help but humm Jerry Vandiver's song while on this portage". 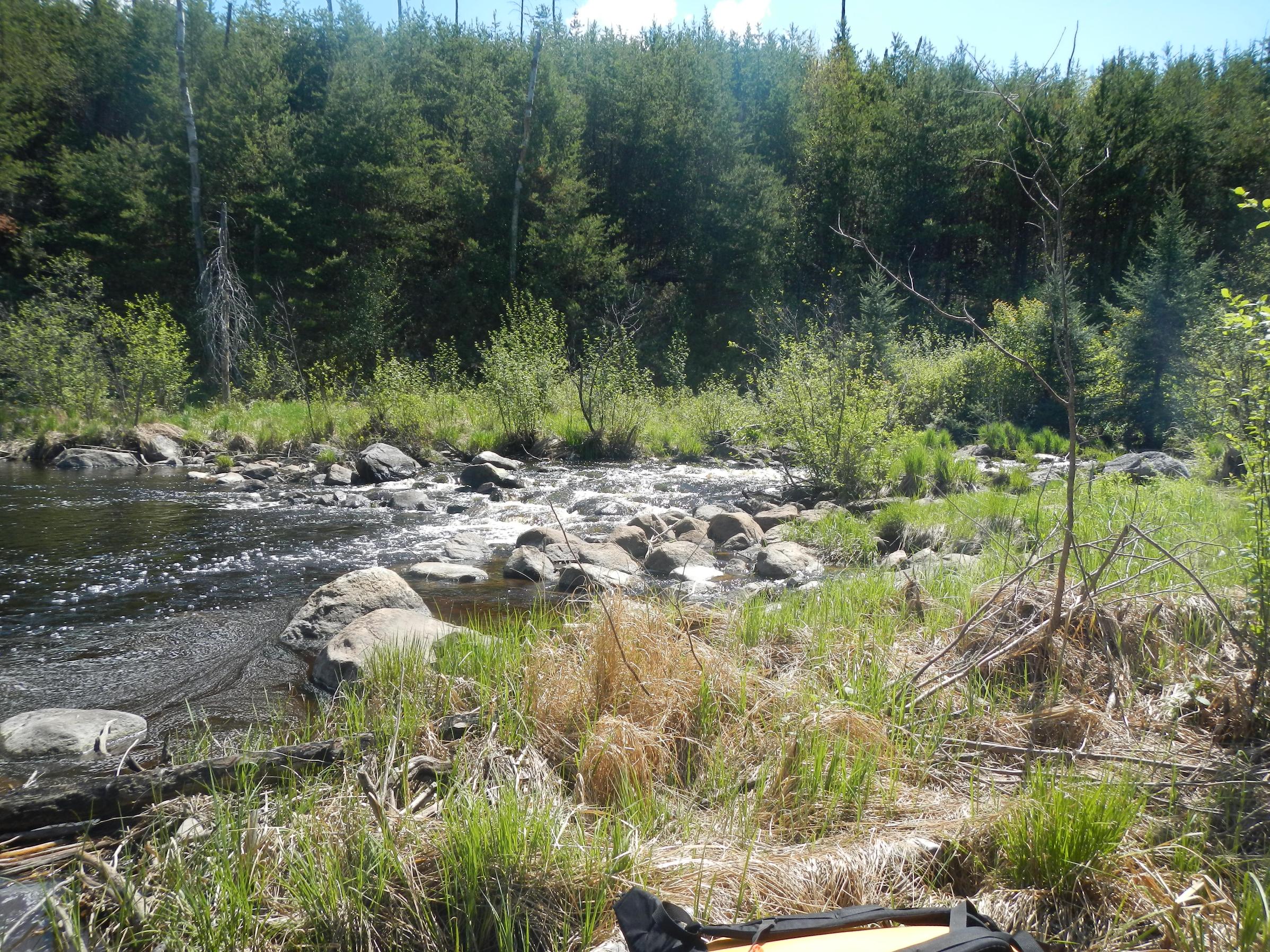 .
Now is where the fun began the last portage in our PMA adventure is the one that goes from the Beartrap River to Beartrap Lake it said on the maps that it was a 200 rodder but the GPS said .78 miles. All I can say is this portage really sucked it had 46 downed trees and 6 widow makers, I know because I counted them. It had ups and downs, muck and a small creek to cross, and I did see some wolve and moose tracks. It took us about 2 hours to double portage this trail everybody was pretty beat. We took a break for lunch on Beartrap then we headed through Thunder to Gull we took the first campsite south of the portage and it was a welcome site we were all pretty whipped. 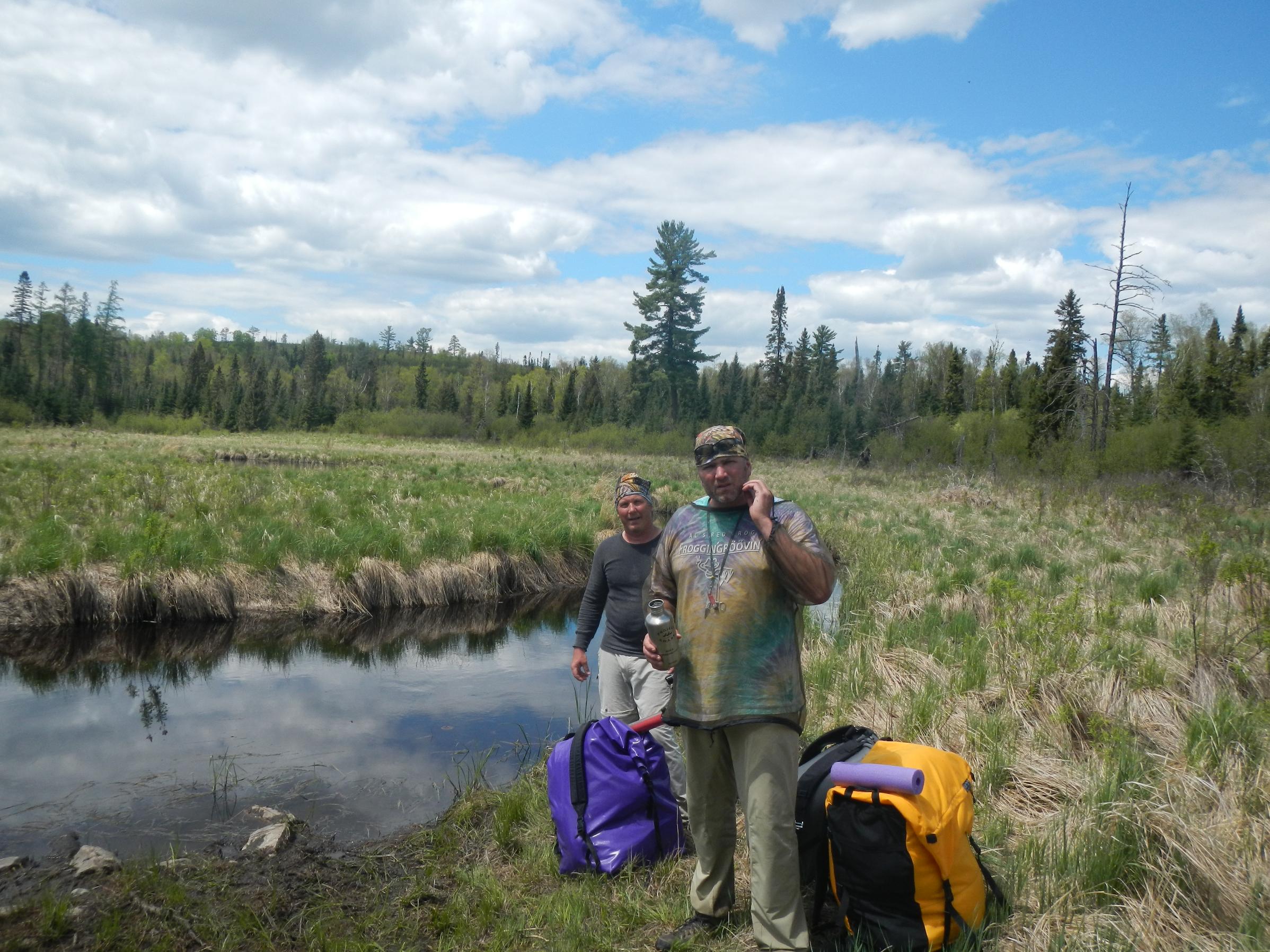 The Gull Lake campsite was also very nice, I forgot to mention that this day from hell was also my 54th birthday, so we had a little of the wine we had left with a nice tortellini supper. This is at least the 15th birthday I've spent in the BWCA and it was by far the toughest. The Gull Lake campsite had some of the biggest red pines I have ever seen. 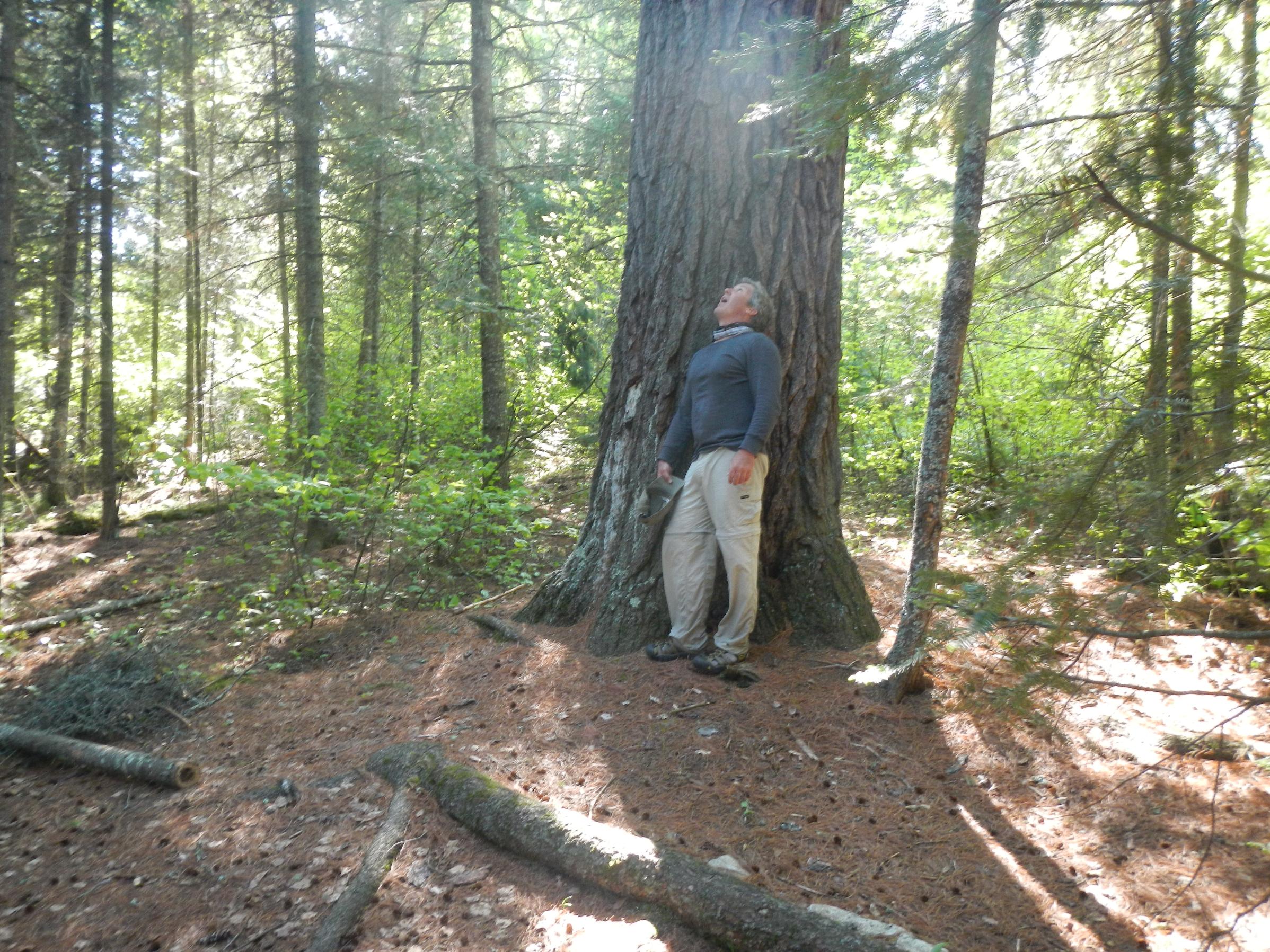 Gull Lake was also very good for walleyes nothing huge but lots and lots of 15 to 19 inch fish right from our campsite again. We stayed up until dark fishing and listening to music, then we turned in we were headed back to Mudro tommorrow because of a heavy rain forecast.
Day 7---10 miles and 7 portages. We were up early around 6 caught a few more walleye before breakfast, had cache lake biscuits and gravy it was very tasty. We packed up fairly quickly and were on the water by 8:15am we ran into the guys that were at the next campsite they were headed to Sunday, we gave them some the leeches we had left and wished them well, then we headed for Gun. All these portages are pretty short and easy, Gun, Fairy, Boot Fourtown. The 3 portages from Fourtown to Mudro are much more challenging, I don't know if it was that we were just beat down, that we're getting older, or they are tough. The first is a 10 rodder easy huh?, Well the landing sucks it's very steep so you unload everything up the incline before you start the portage. 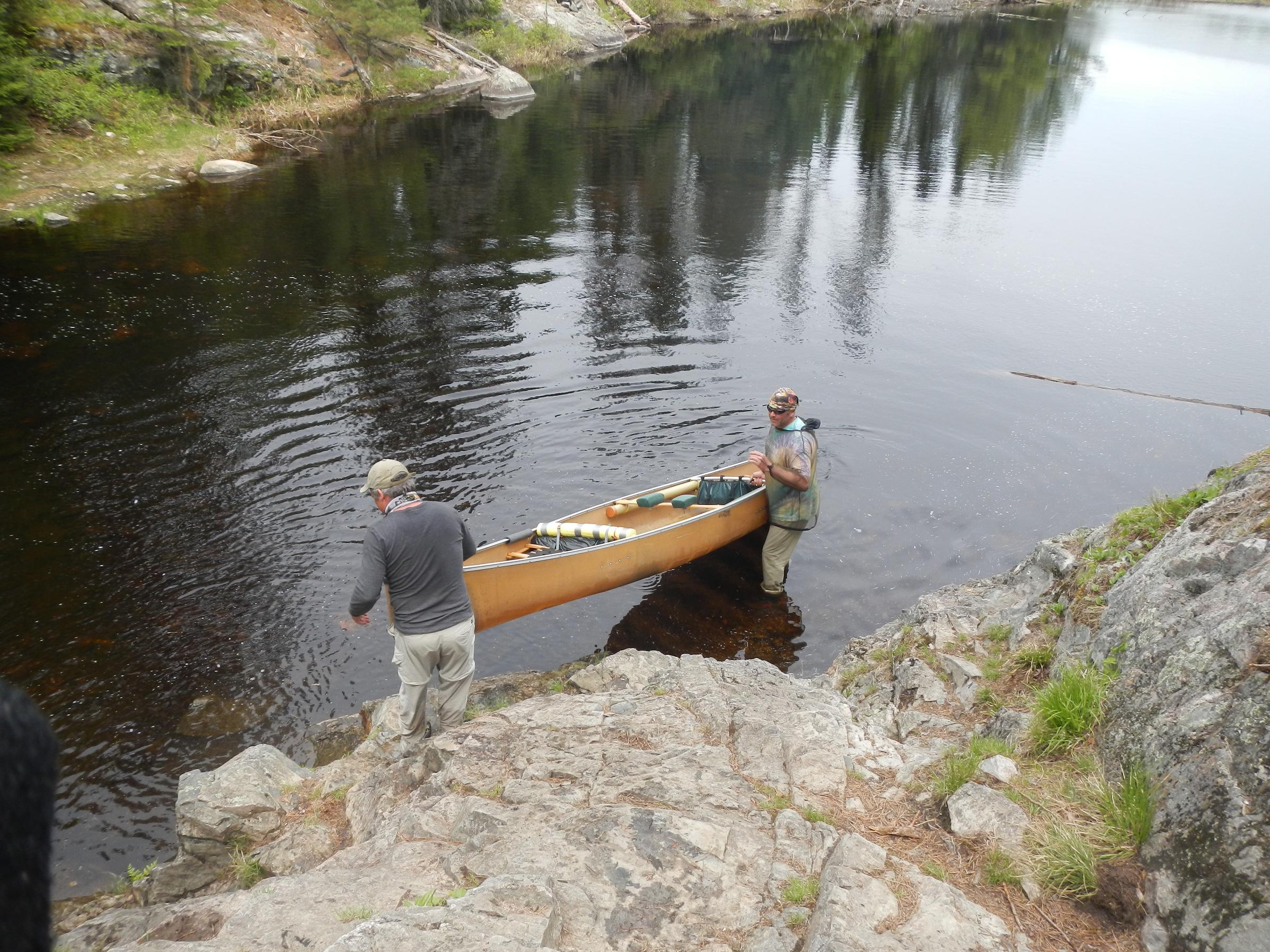 Next is the 141 rod portage in the middle, it's a beautiful portage, ups and down, cliffs, drop-offs and sharp rocks, too bad I was too tired to enjoy it too much. 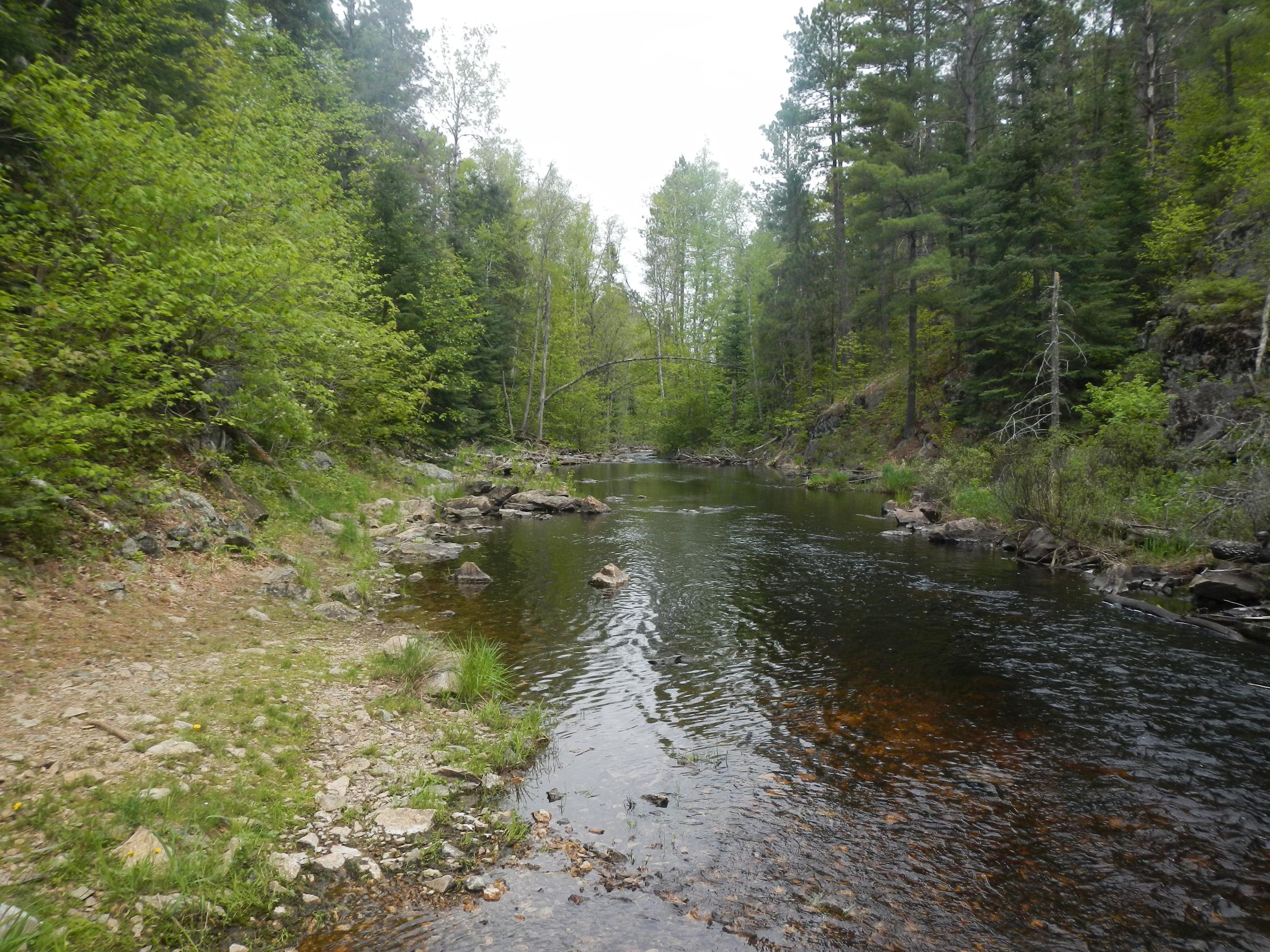 The last 30 rod portage was just more of the same sharp rocks, muck and mud, and a crummy landing. Now all we had was Mudro to paddle we made quick work of it and we paddled right up pickett creek bypassing the last 30 rodder. Trip done as we were loading up it just started to rain, perfect timing, didn't put the raingear on once for the second year in a row.
We headed to Ely for a burger at the boathouse and a couple of drinks. We were all pretty beat but proud of a tough trip completed and no real mishaps, didn't even take the first aid kit out except for ibuprofen for our aching muscles. Time to start planning the next adventure, where, when, who knows all I know is I'm already ready to head back. 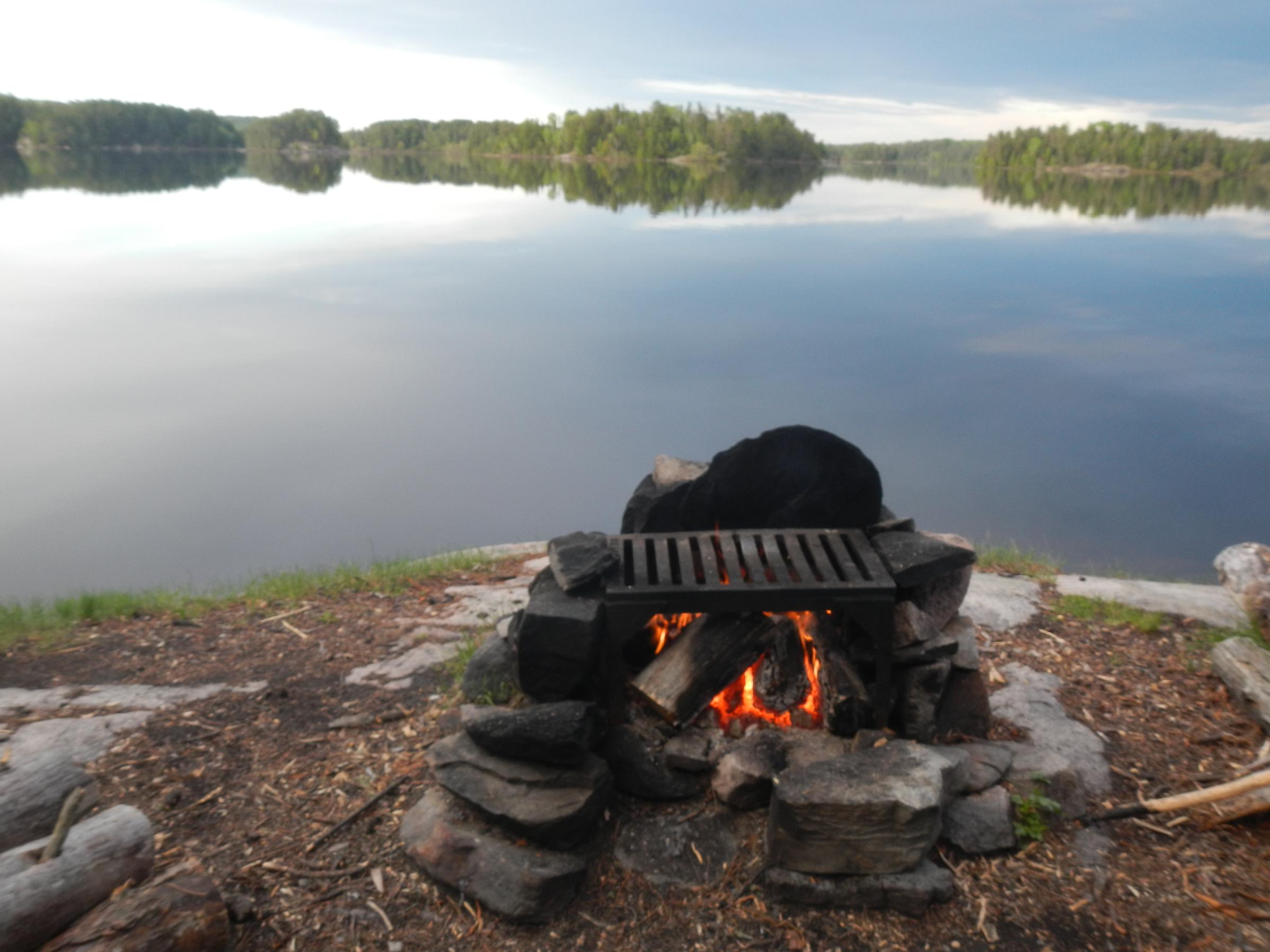 BWCA KEEP THE FIRES BURNING FOR ME I'LL BE BACK !!!!!
Back to Trip Report Main Menu