Trip Type: Paddling Canoe
Entry Date: 06/07/2013
Entry Point: Big Lake (EP 7)
Exit Point: Slim Lake (EP 6)
Number of Days: 5
Group Size: 2
Trip Introduction:
May was a tough month. Sadly Vickies' Mom passed in the middle of the month and, obviously, our outdoor endeavors were put on hold or cancelled out right. It was early June before the Black Pearl finally hit the water on a small local lake. Her first canoe country trip would be out of Big lake EP #7. My brother Clay would be my partner through this little visited area. Since Big lake wilderness outfitters was located right on the EP lake, I thought they'd possess the most knowledge and convenient services for this area. Unfortunately, that was NOT the case. Needless to say, I wasn't comfortable using this outfitter. That situation being what it was, I contacted Spirit of the Wilderness Outfitters in Ely. They've always been exceedingly helpful & proved to be yet again. Expediently addressing all our needs in their customary professional manner.
Discuss Trip: View Discussion Thread (16 messages)
Day 1 of 5
Friday, June 07, 2013

Having first dropped my van off at the Slim lake (EP #6) landing, our shuttle arrived at the boat landing on Big lake by about 10:00. Big is a motorized lake and, as we were loading up, a boat was coming off the lake & another was just pulling up to the dock. Fortunately, we would only see one other boat on our paddle across this lake. 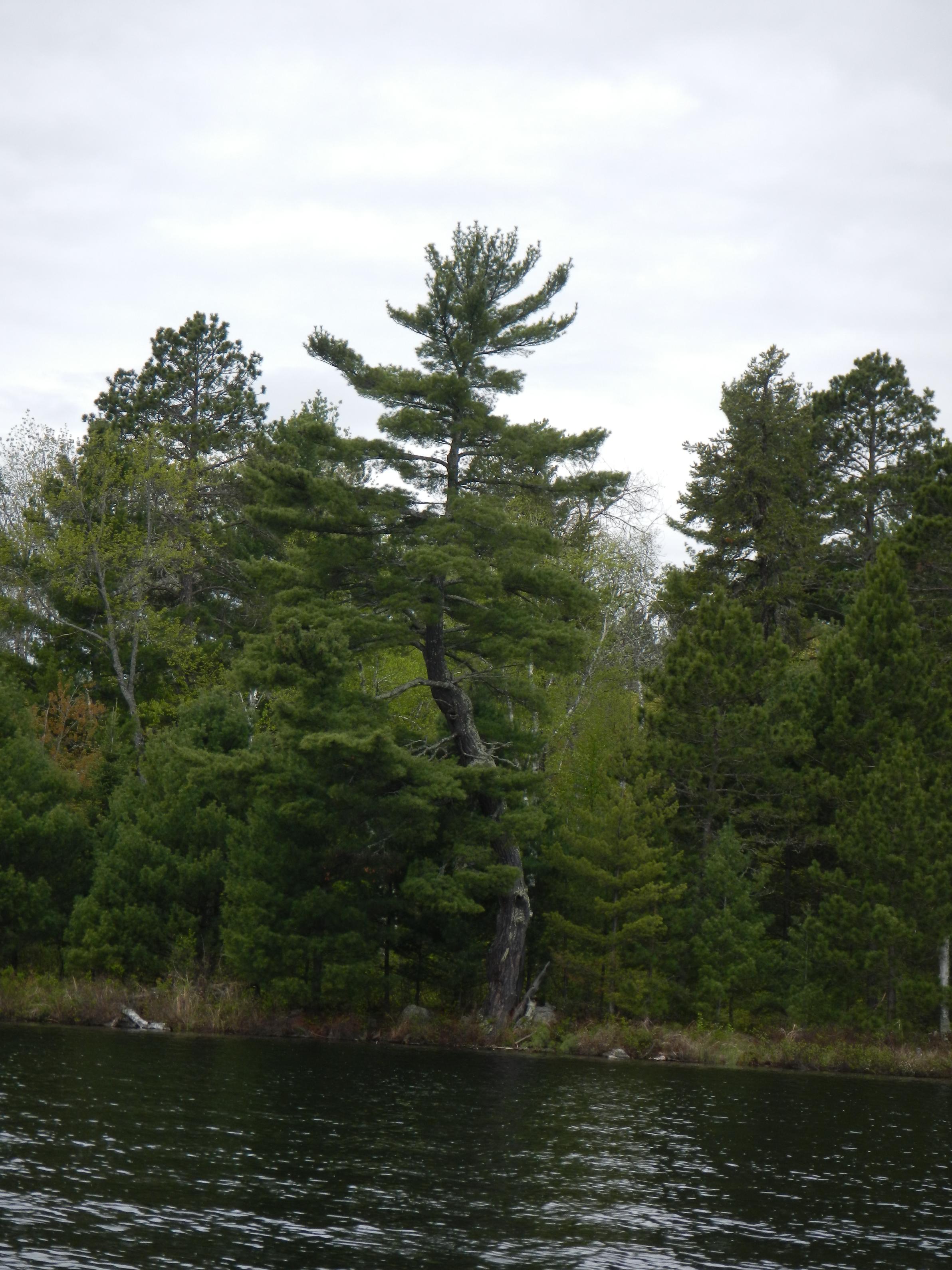 The subtle sounds of the canoe & paddles cutting through the water was a sweet serenade that was a long time in coming this year. It was a gray, gloomy paddle but there was little wind to hinder us; so we made good time. This would be the first opportunity for me to really test out my new double bladed paddle; (Bending Branches Navigator) so I was both excited & nervous to see how it would perform. And, perhaps more importantly, how I would adapt.

It didn't take too long to settle into a nice groove. (IMHO it's a much more rhythmic style of paddling.) Although, with Clay using a traditional single blade, initially it took a little experimentation to keep the Black Pearl on course. Ultimately, I determined this paddle will definitely achieve it's main objective when we paddle with Aurora.

Skipped the first portage & had no problems finding the entrance to the river in the SW corner of Big lake. Water levels were high, but I think a canoe would be able to make it through at significantly lower levels as well. (Depending on beaver activity) 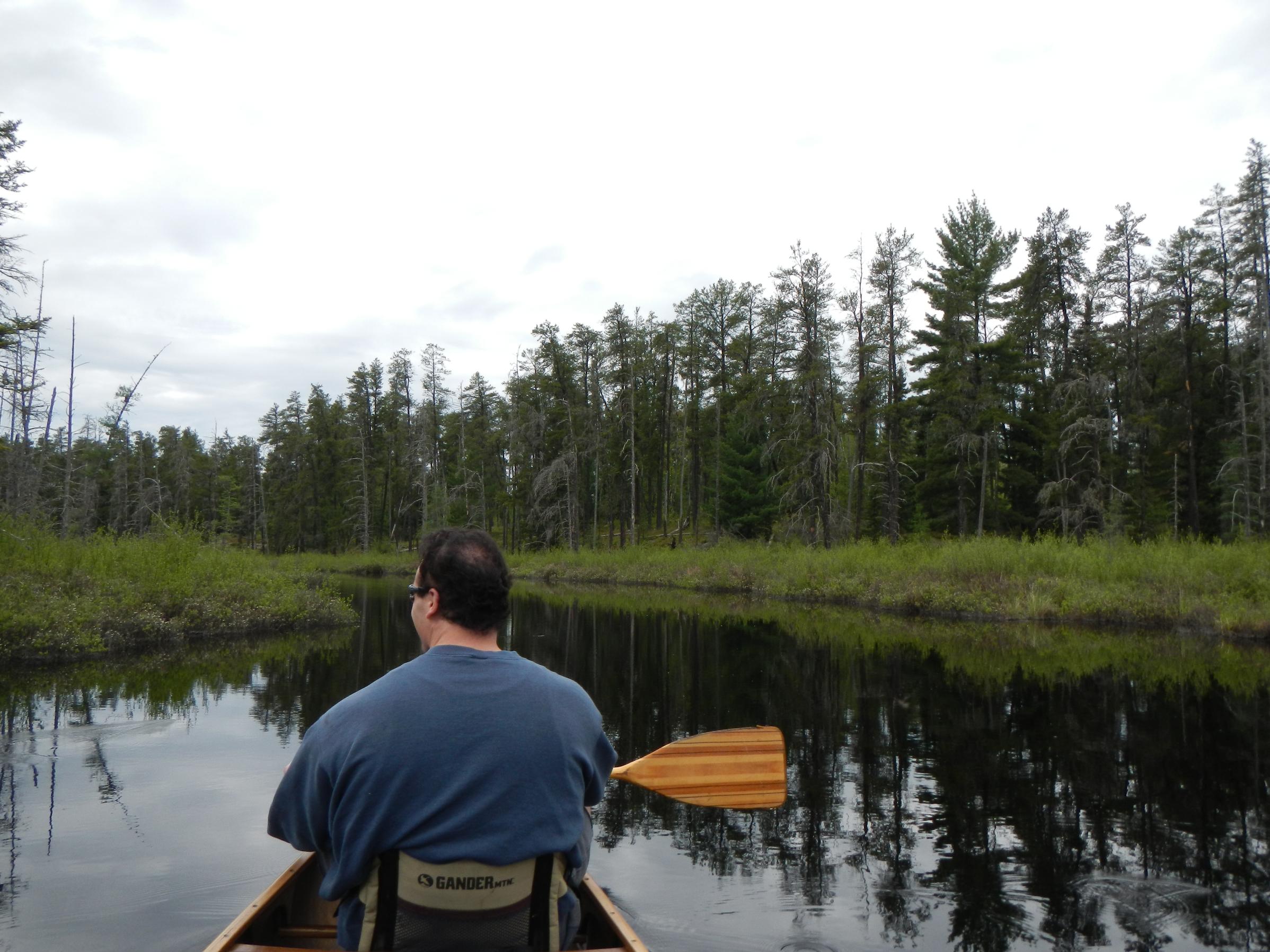 Supposedly the sun was to make a prolonged appearance today. But, it didn't appear that forecast would be proven accurate any time soon. Instead, it was our good fortune that the banks of the river were lavishly garnished with the bright pinkish glow of bog laurel.

We were now approaching Lapond lake. My Voyageur map shows a short portage over a peninsula in the river. We searched in vain for a landing, but came up empty. Paddling a little further upstream we found a beaver dam and quickly deduced that the water levels would be sufficient to float our loaded canoe. My, after the fact, assessment is that this portage is rarely, if ever, needed.

Encountered another small beaver dam at the entrance to Lapond lake that we were able to paddle right over. Then we headed straight east to check out the campsite.

Our target destination was the site on Big Rice. But, in the unlikely event that it was occupied, we wanted to check this one out too. Besides, it was nice to get out and stretch the legs a bit.

Couldn't say the same about the lake, but the campsite seemed better than average. There were some boulders strewn about but it had a nice landing, & few decent tent pads all situated under a canopy of mature red pines. It appeared it could even be a good spot for blueberries too. 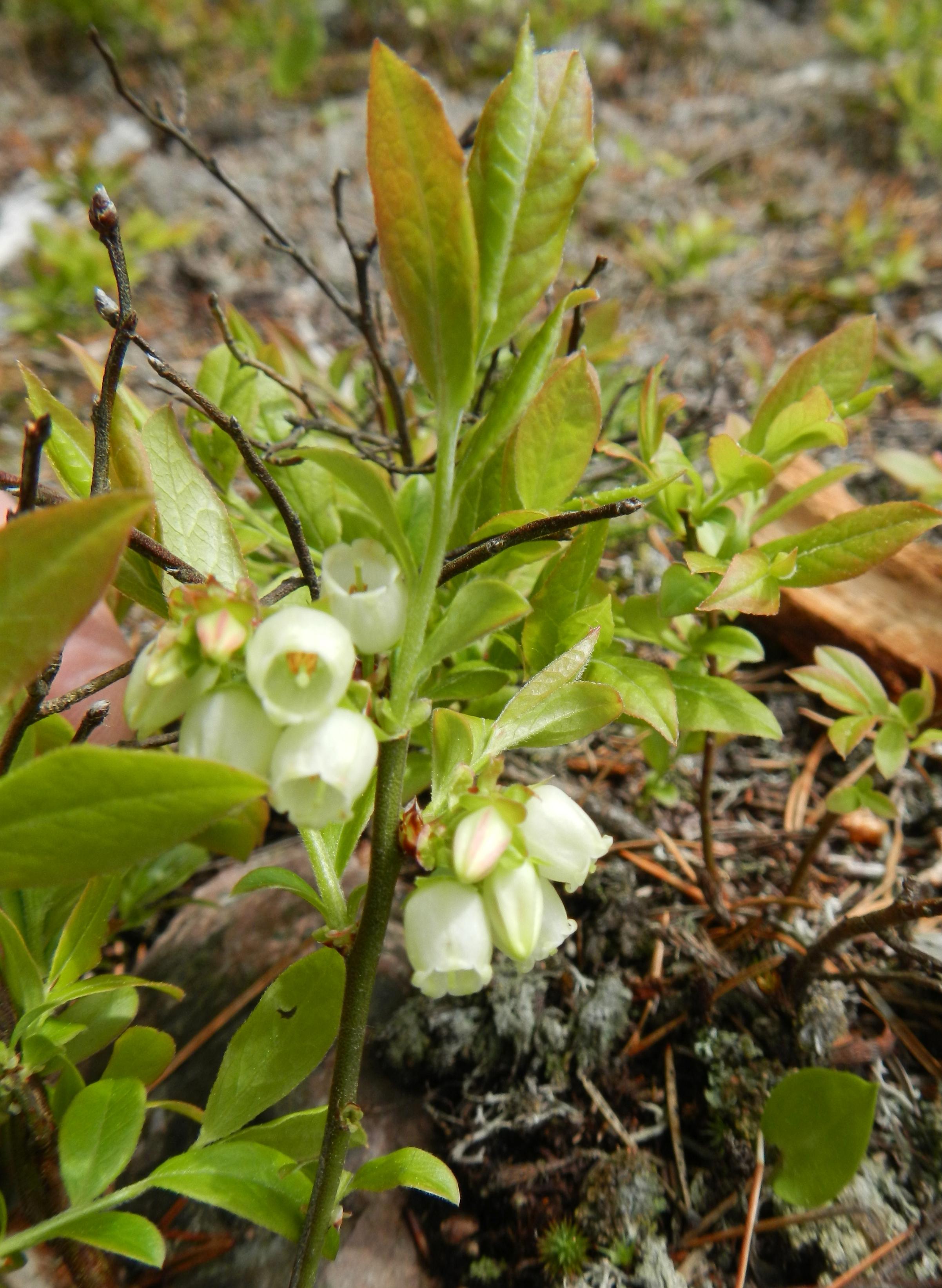 Onward up the Portage river. The landscape on both shores was a bog for as far as the eye could see. Cotton grass was contrasted by the luxuriant soft pastel green of the newly sprouting tamarack needles. We also kept an ever watchful eye out for 'a pair of mobile satellite dishes'; as Clay termed it. 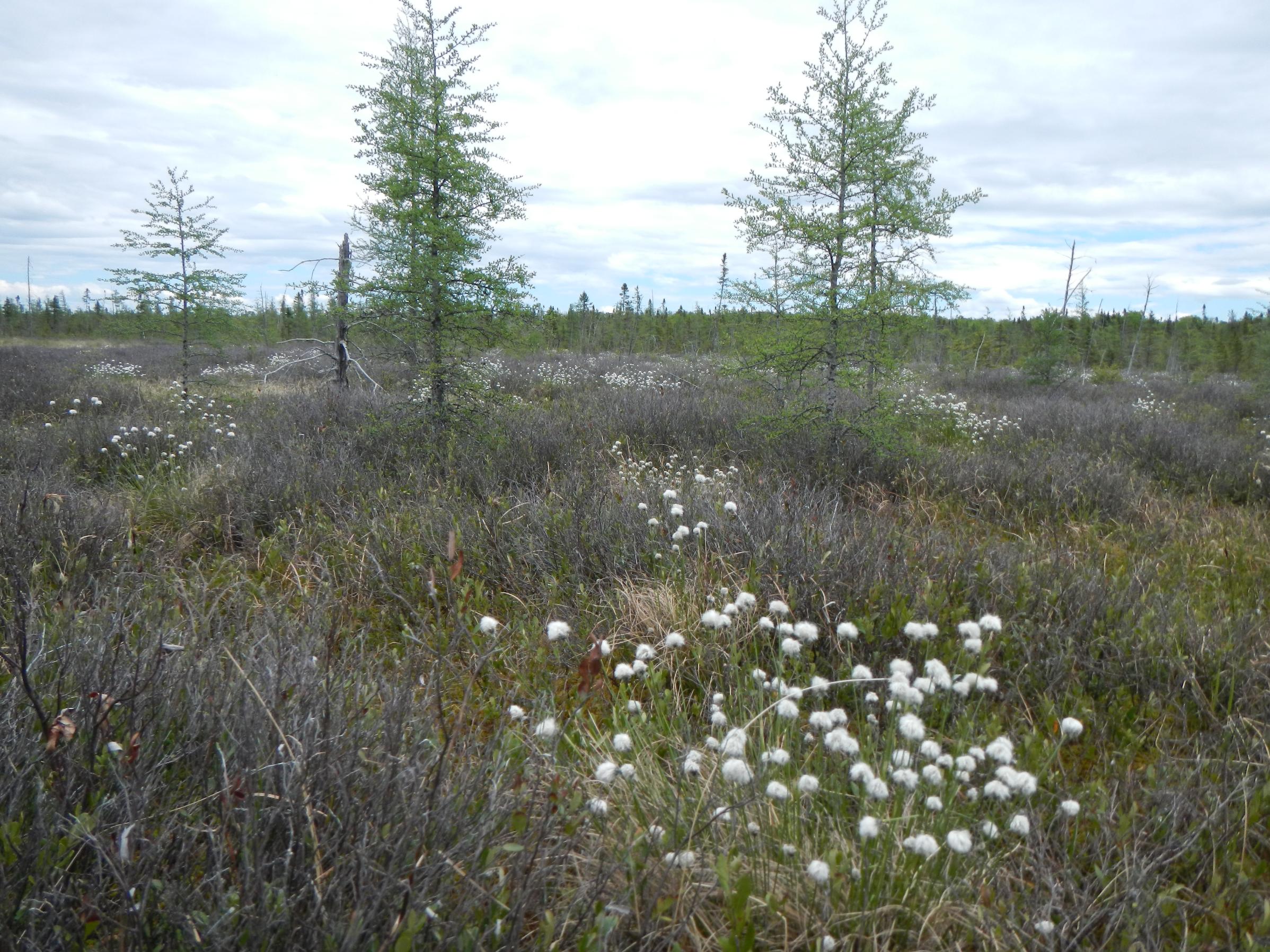 In short order, we pulled up to our first real portage of the day. It was a short (37 rods) and flat, narrow trail. There were, however, many overhanging branches as well as some roots and rocks to negotiate. Both landings were somewhat rocky as well. Undoubtedly the high water helped make them considerably more user friendly.

There was a slight variable breeze as we emerged onto Big Rice lake. It did little to hinder our progress, but since we just finished the portage - the cooling effect was much appreciated.

As expected, the campsite was vacant. So, we took a short detour over to the small island and paddled around the perimeter before finally pulling into the campsite landing to unload. The island appeared to be a neat area for future explorations.

For being such a swampy, boggy area we were both a little surprised that the campsite was situated up on a tiered bluff some 20 feet off the water. The landing was very rocky. Upon walking up on shore, Clay was taken aback by the golf ball sized 'mooseplums' near the landing. (we later found more scattered about the area & large swaths through the brush. Though we never seen the 'mobile satellite dished creature that created them.) As we worked our way up to the fire grate we startled a large garter snake sunning itself on the exposed rock face. To be fair - he startled me too. 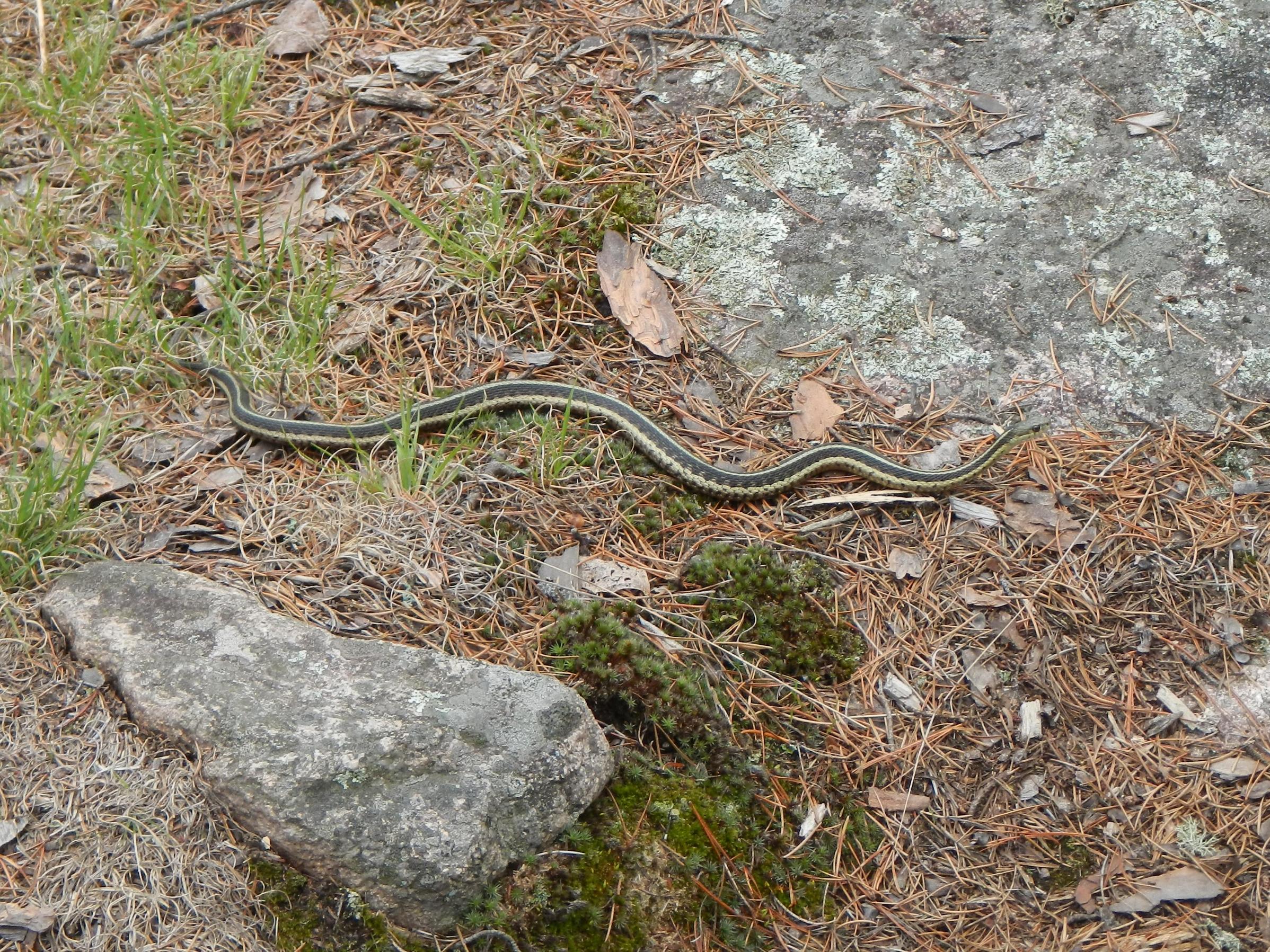 Apparently we embarrassed him to such an extent that he left the camp and didn't show himself again. (Which I was thankful for.) Since the forecast for the next couple days didn't call for rain, I didn't bother setting up the CCS tarp. But, we did pull the hammocks out. There was a fine stand of jack pines just off the fire grate area which worked well for just that purpose. It was a great feeling to finally be in a canoe country camp taking it all in.

There was clear evidence that this campsite was also home to a busy beaver. In our search for firewood, we came across some large downed trees. Hopefully there weren't any near our tent pad that were on his list. 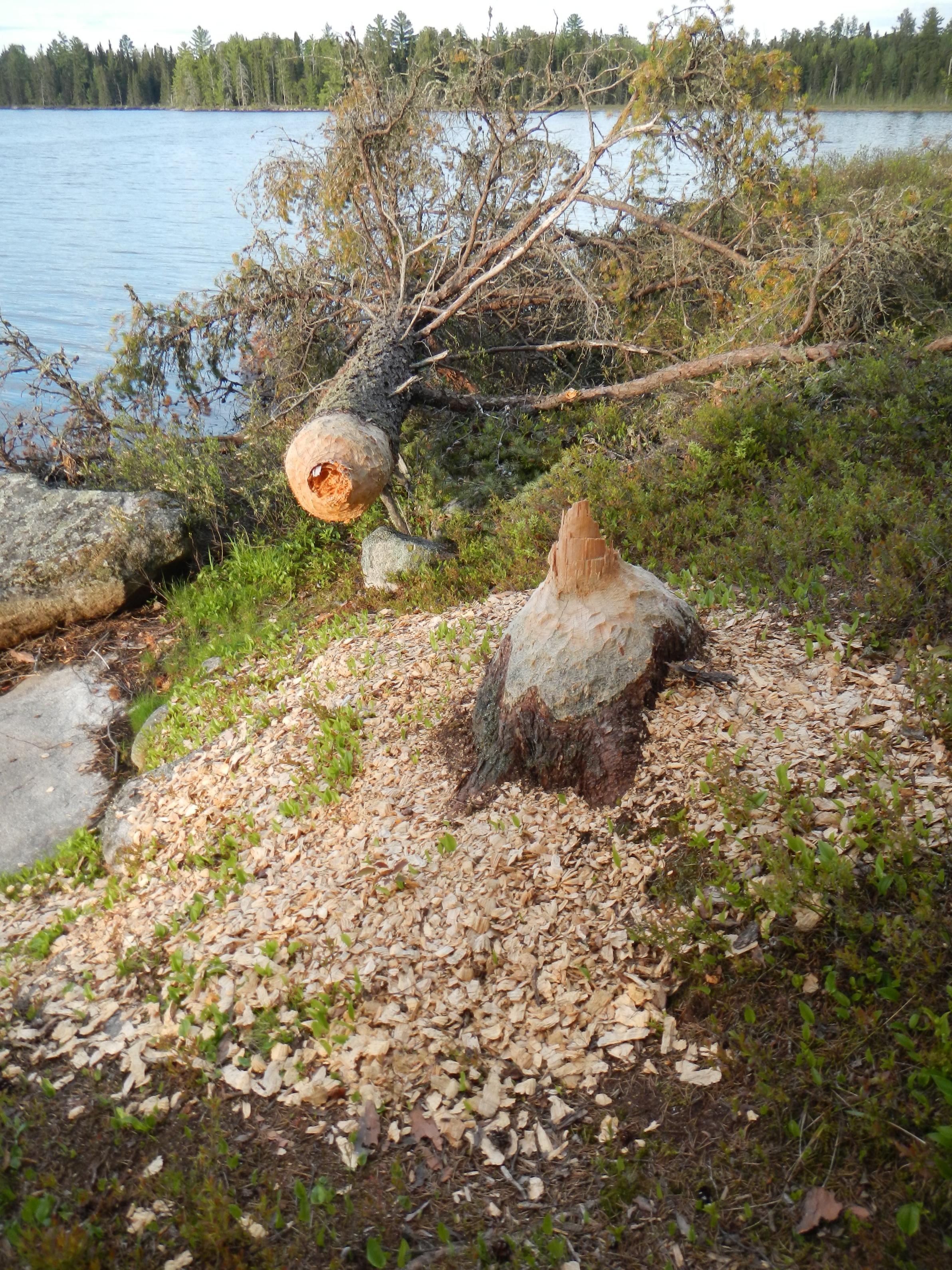 After getting some firewood up, it was time to get the steaks going. We continued processing the firewood while supper was cooking. And, later, enjoyed the fruits of our labor with a tasty meal & glorious sunset. 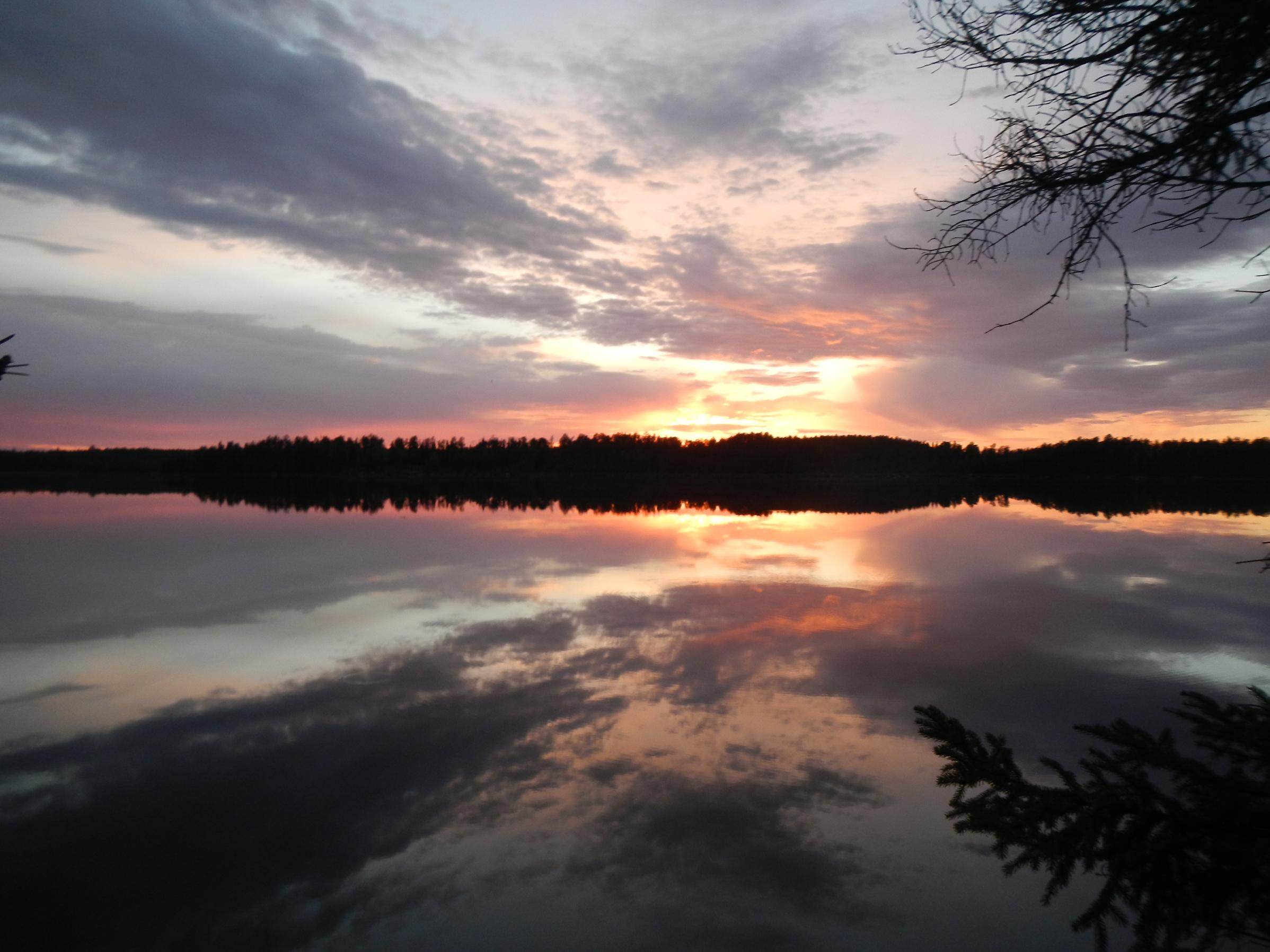 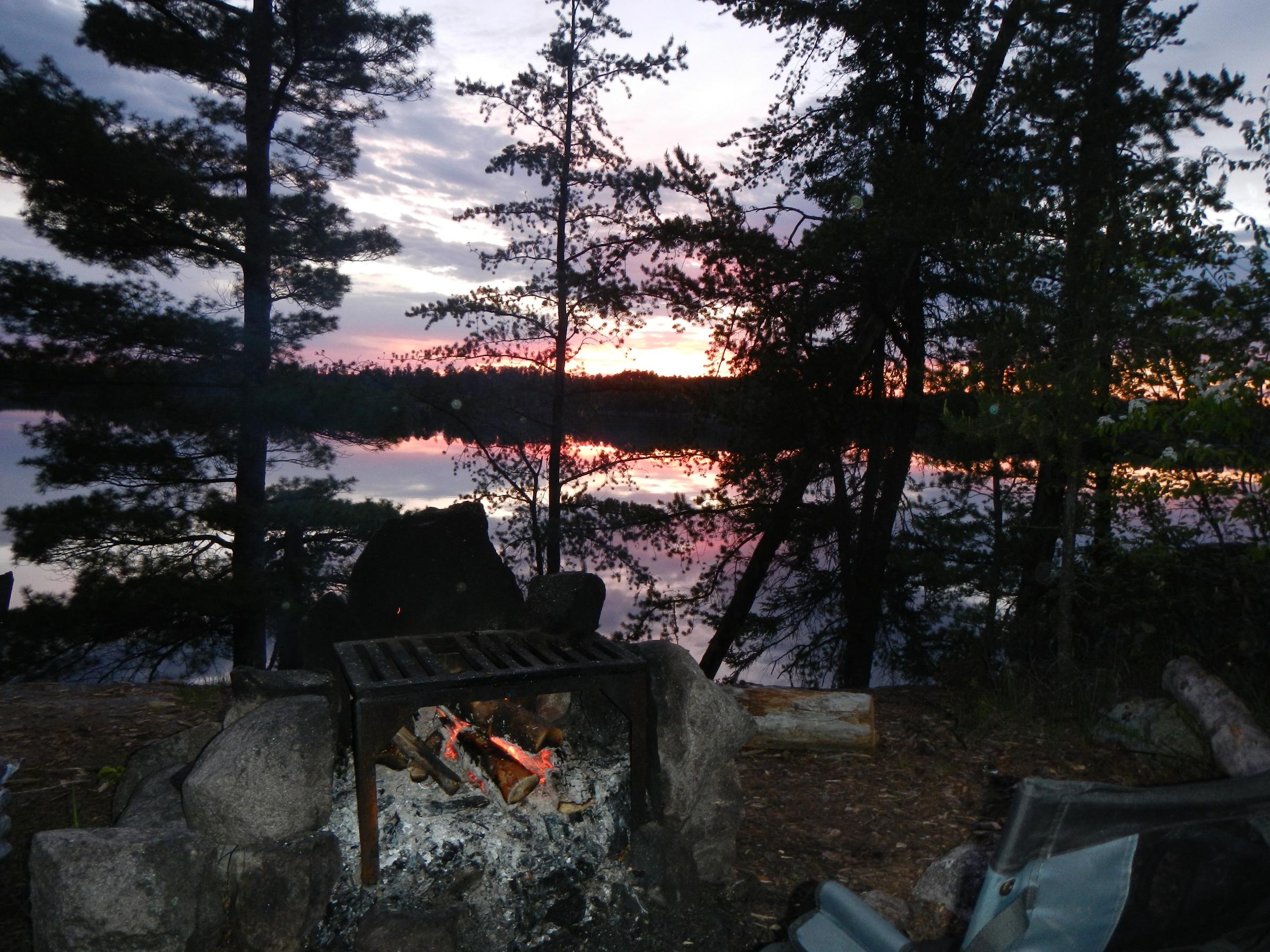