Trip Type: Paddling Canoe
Entry Date: 05/26/2013
Entry & Exit Point: Other
Number of Days: 7
Group Size: 4
Trip Introduction:
We started planning this trip after our Woodland Caribou adventure last year. We were excited that Chris' brother, Paul and his dad, Mike, would join us on our much easier adventure this year base camping on Glenn Lake.
Discuss Trip: View Discussion Thread (11 messages)
Report
We, Chris, Jenny, and our dog, Decoy, started our adventure after leaving Fargo, ND for Upper Red Lake in Minnesota where we met up with Chris’ dad and brother, Mike and Paul. The trip to Upper Red Lake was loud with our new Bell Composite canoe, “The Black Sheep,” strapped to the roof of our minivan. It became apparent that the yoke pads needed to be removed for travel.

On Saturday morning, we transferred the canoe to Mike’s suburban and headed north towards the Canadian border (the canoe still buzzing loudly). We crossed the border at Baudette with no issue and stopped for lunch at Nestor Falls. We enjoyed hearing several stories told by Mike about fishing this area over the past 60 years. We arrived in Red Lake Ontario about 5:30 pm and settled into the Super 8 Hotel. The parking lot was essentially empty except for two other vehicles with canoes. We called Harlan, from Red Lake Outfitters, and set up a dinner date at the Howey. We then toured Mike and Paul around Red Lake before supper. Supper was good at the Howey and we had good conversation with Harlan. We went to bed, excited for our adventure to begin.

Before we left the hotel Sunday morning, Harlan dropped off a chainsaw and 6 liters of gas, as we had become honorary members of the portage clearing crew. Apparently, Harlan didn’t think our two Sven saws, axe, and clippers were sufficient to clear the two, 270-meter portages between Glenn and Optic… he was right.

We flew into the park with Viking Outpost as we did last year. We had to take two airplanes to carry our two canoes. It was a nice flight into the park and we landed on Glenn Lake about 10:30 am. The first plane had The Black Sheep, three people, the dog, and most of gear, including the chainsaw. The pilot loaded us up and wished us luck as we paddled towards our campsite. The second plane had our rented canoe, a pack or so, and Mike. We all made it to the campsite safely and watched the floatplanes take off. We camped on the South shore about 1 mile from the East end of the lake. It is a nice campsite with about 3 tent pads, a nice fire pit, and good landing. We had to clear one large tree off of Mike and Paul’s tent pad; the chainsaw came in very handy! ? 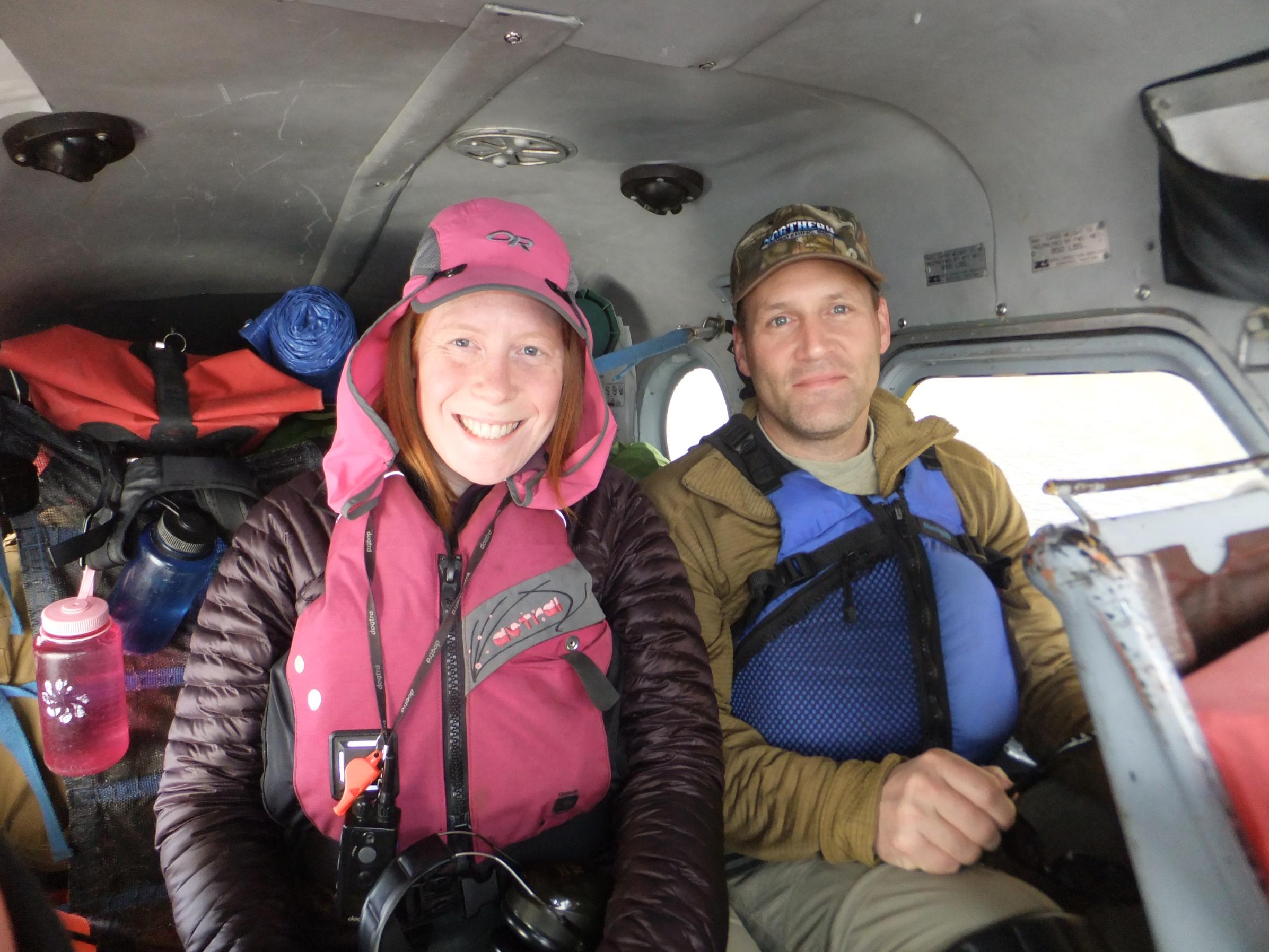 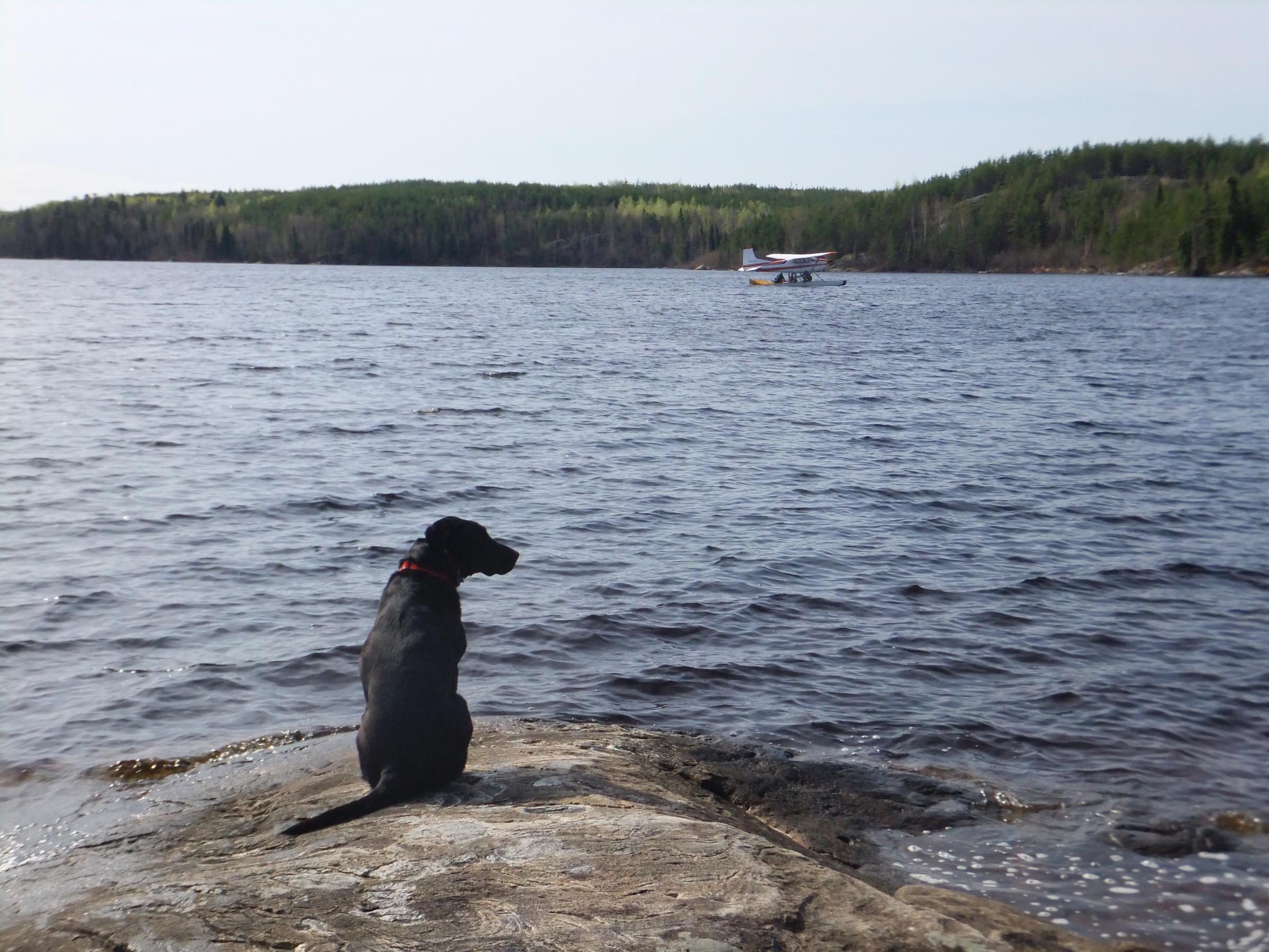 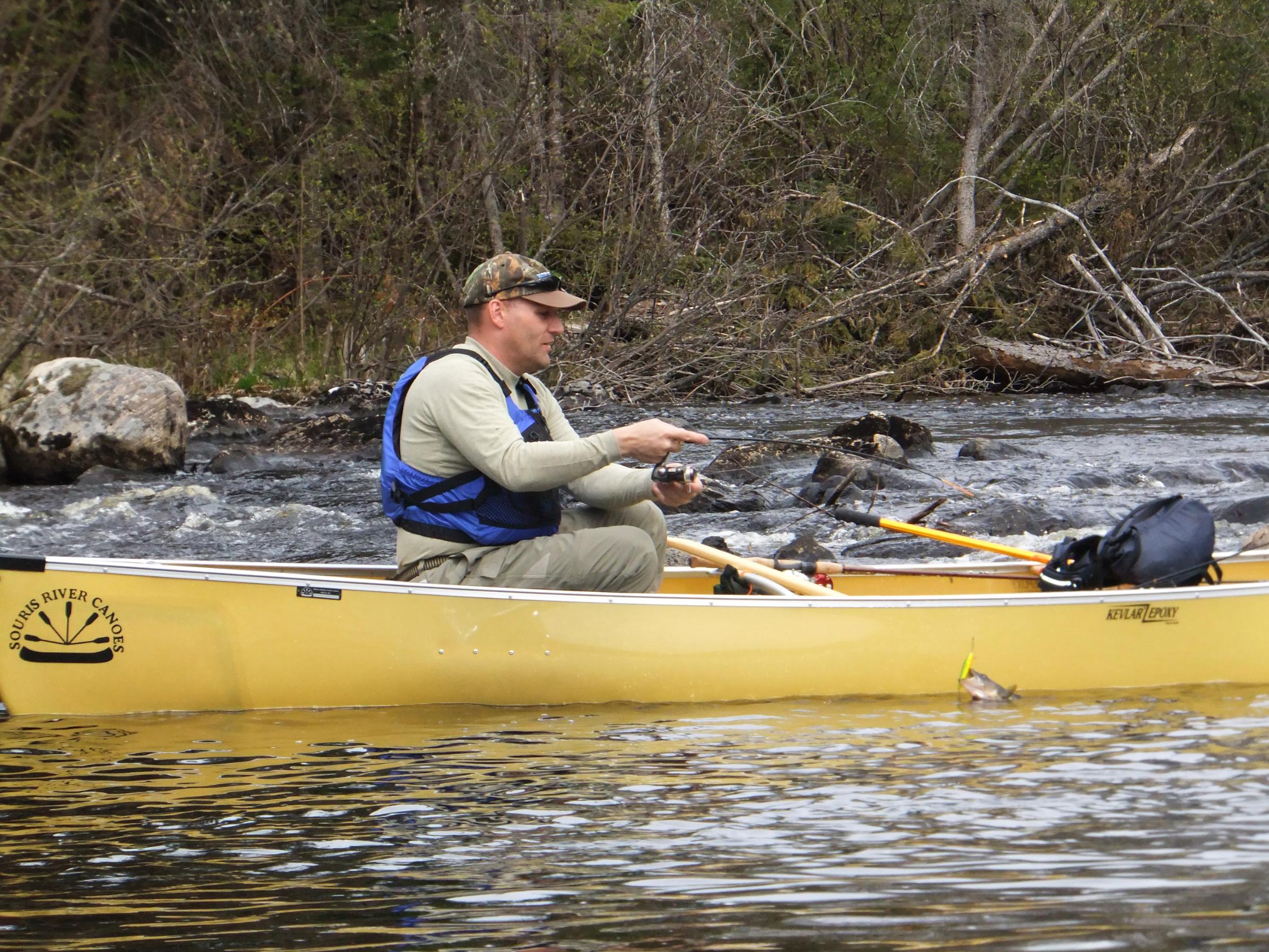 After camp was set up, we made our way out onto the lake to find the surf portion of our surf and turf supper. As promised, Jenny caught the first fish of the trip while trolling. We caught more than enough fish for supper and foolishly listened to Mike’s insistence that, “Of course we need 3 walleyes” to go with 4 NY strips, wild mushroom risotto, and morel mushrooms. He was wrong, but it tasted very good.  Decoy ate like a king. Sadly, we had to skip the dessert of brandied apples. 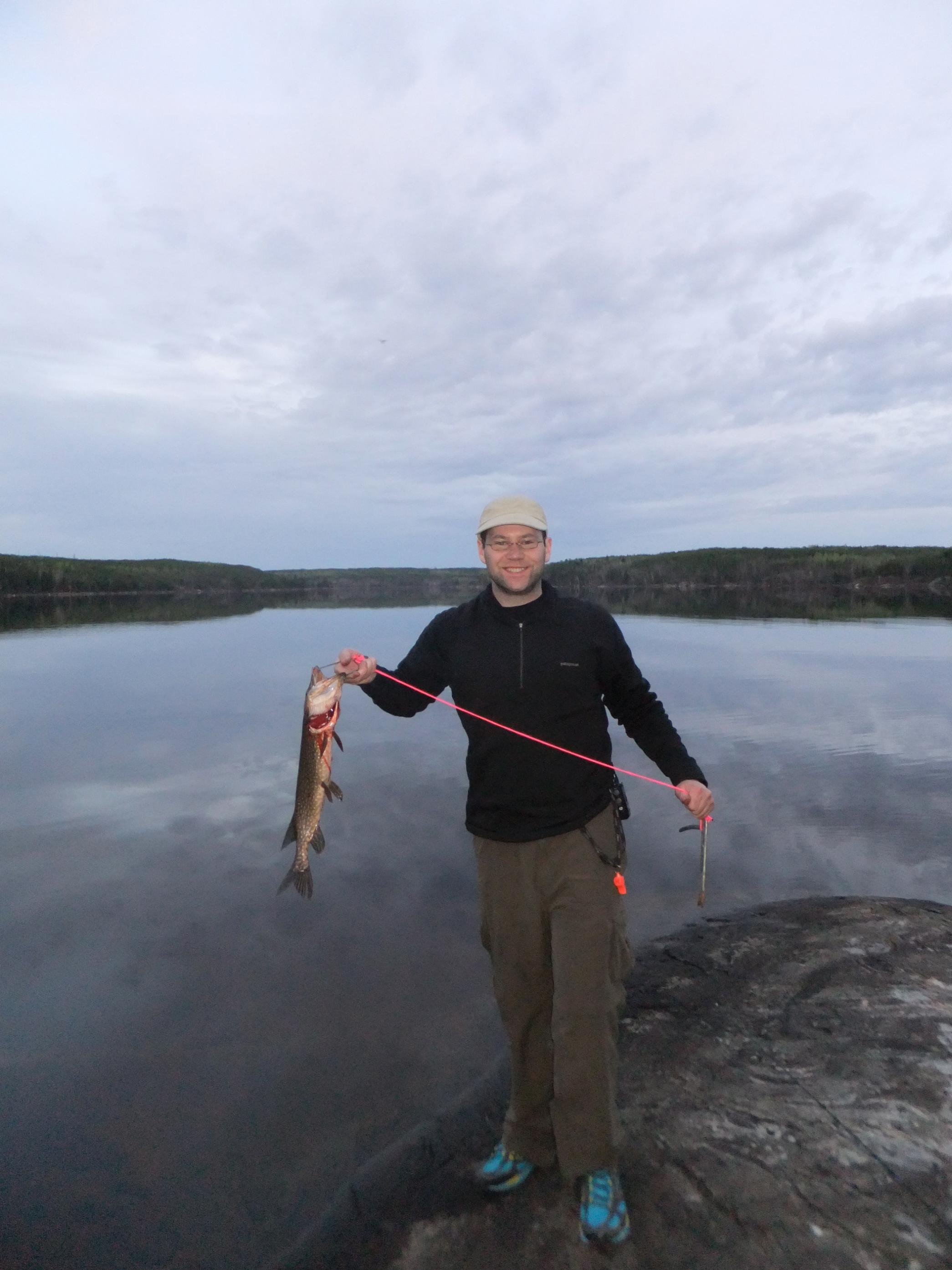 We woke up the next morning, not especially early, and made breakfast of grits, scrambled eggs, parmesan cheese, bacon bits, and red pepper. While we washed dishes, Mike and Paul gathered firewood and did camp chores. We then headed out fishing. We tried various spots for fishing while Mike and Paul headed back to the rapids at the inlet from Optic. The walleyes were spawning and we had some luck catching fish here the day prior. While we were slowly making our way to the rapids, Mike and Paul had an exciting encounter with a large black bear! They were able to snap several pictures while the bear watched the walleyes spawn. The bear eventually decided to get into the boat that is stored at the portage for the outpost to use. He climbed over the side and looked around for a bit. He finally noticed Mike and Paul and took off up the hill. Fishing was slow in the morning, so we moved shore lunch off until supper. We caught walleyes and northerns later in the day. Most fish were caught on rapalas with fire tiger being the best. For supper we had fried walleye with white bread and fresh onion. It was delicious! We also enjoyed camp toddy over a roaring fire. 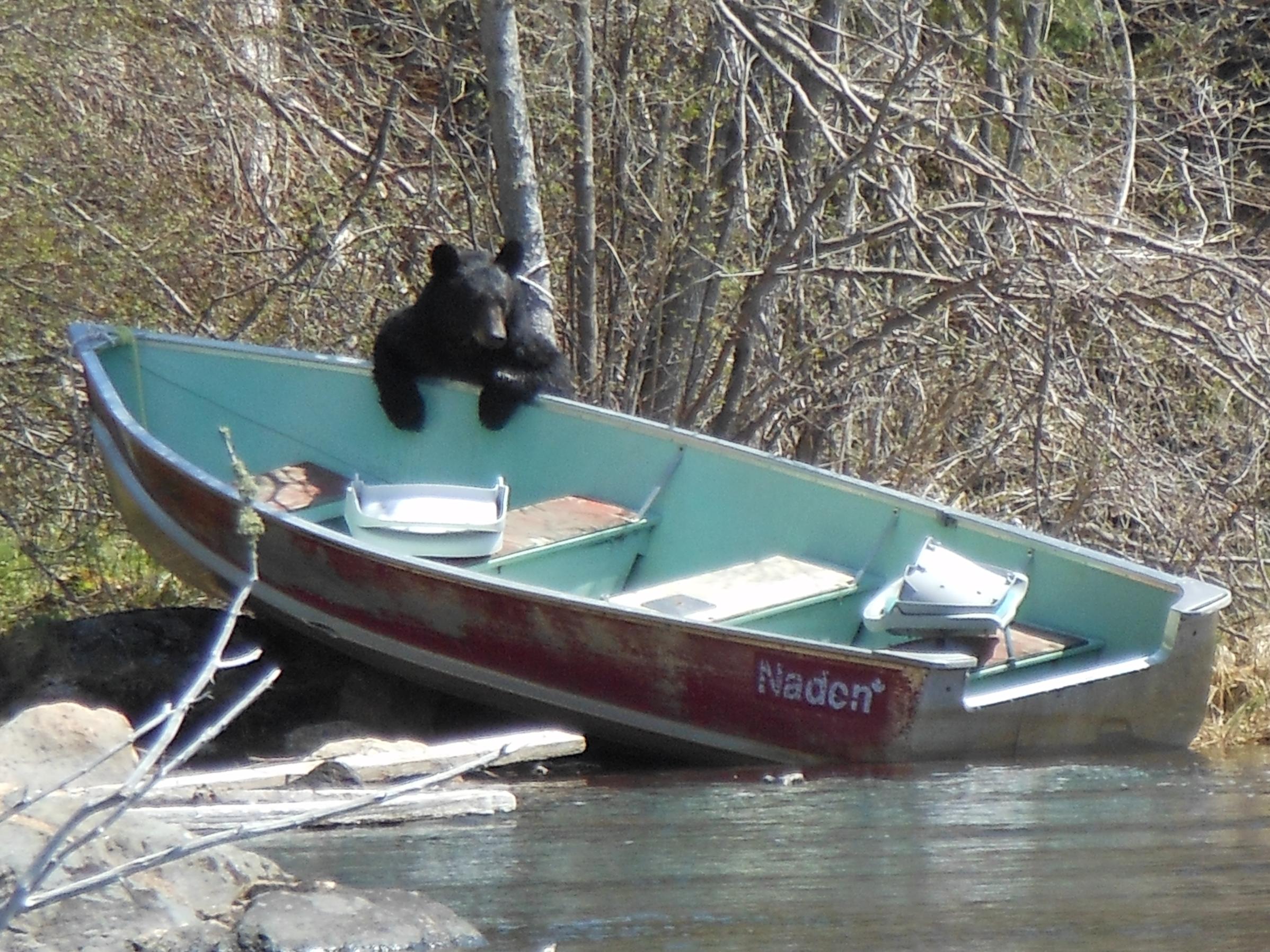 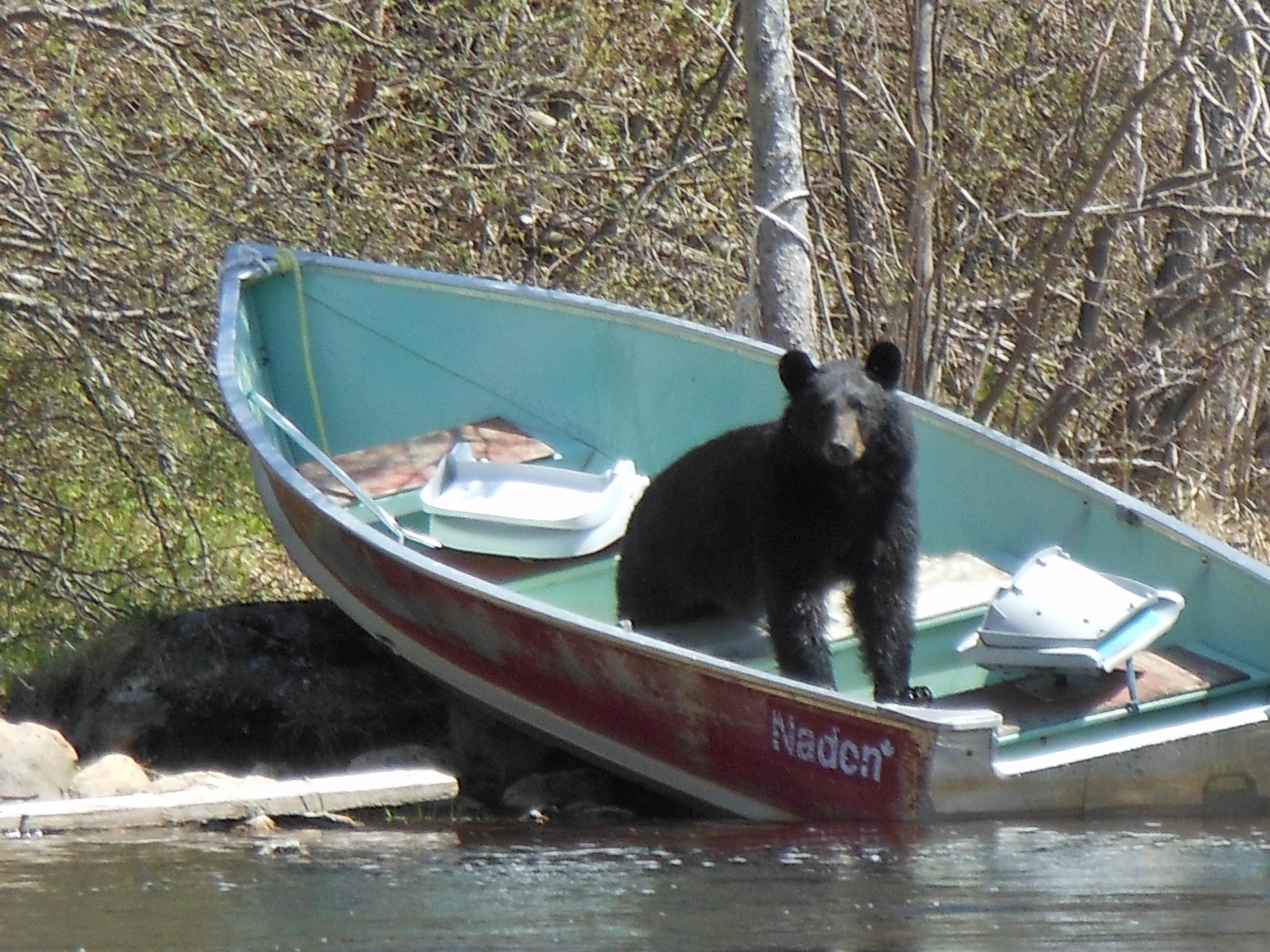 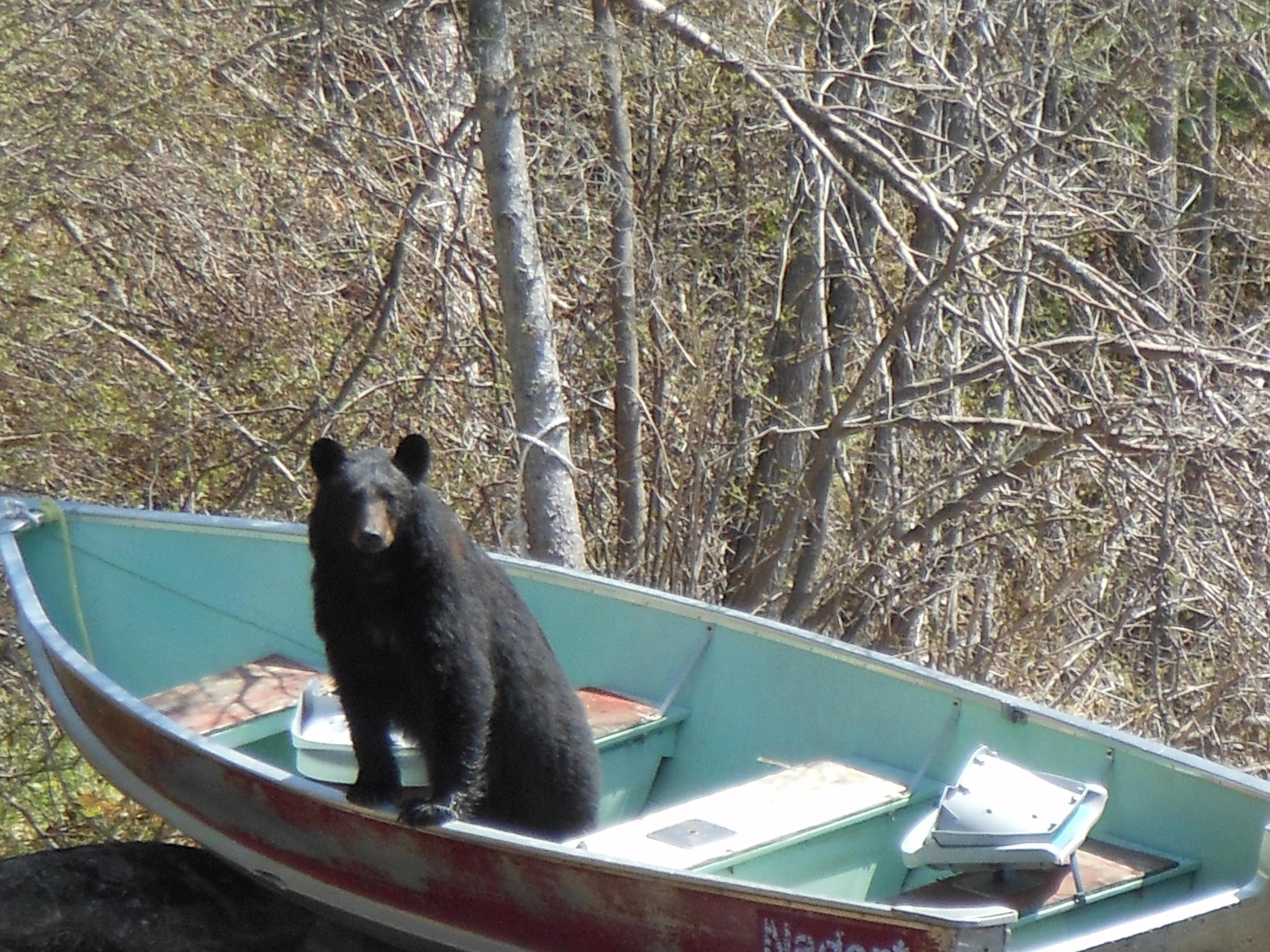 Tuesday was our portage-clearing day. We paddled directly for the portage at the base of the rapids and begin scouting to see how bad it was going to be. We quickly found out that the portaging clearing would be no easy feat. There were walls of trees knocked down by the snowstorm last October. There would be no way to portage through this with a canoe. Mike ran the chainsaw while the rest of us threw the branches and trees off of the path. It took about 2 hours to finish the first portage. At the end, we had a bite of lunch and prepared to clear our next portage. The landing at the next portage was a bit steep. Chris managed to fall in while trying to get a bag out of the canoe. Decoy enjoyed swimming in the rapids and retrieving sticks. At the beginning of this portage, we moved a large tree-top with pinecones and found ice on the ground. We found this in another spot as well. The damage on the second portage was not as catastrophic, but spanned the entire portage. This portage also took two hours to clear. At the end of the portage, Jenny and Chris bushwhacked to the bottom of the falls coming out of Optic and took some nice pictures. As we retraced our steps across both portages, the skies darkened and spit a few raindrops at us. We fished our way back to camp keeping two walleyes for bacon-wrapped walleye over the fire with our spaghetti and wine. The rain didn’t last and we were treated to fog forming over the lake that evening. 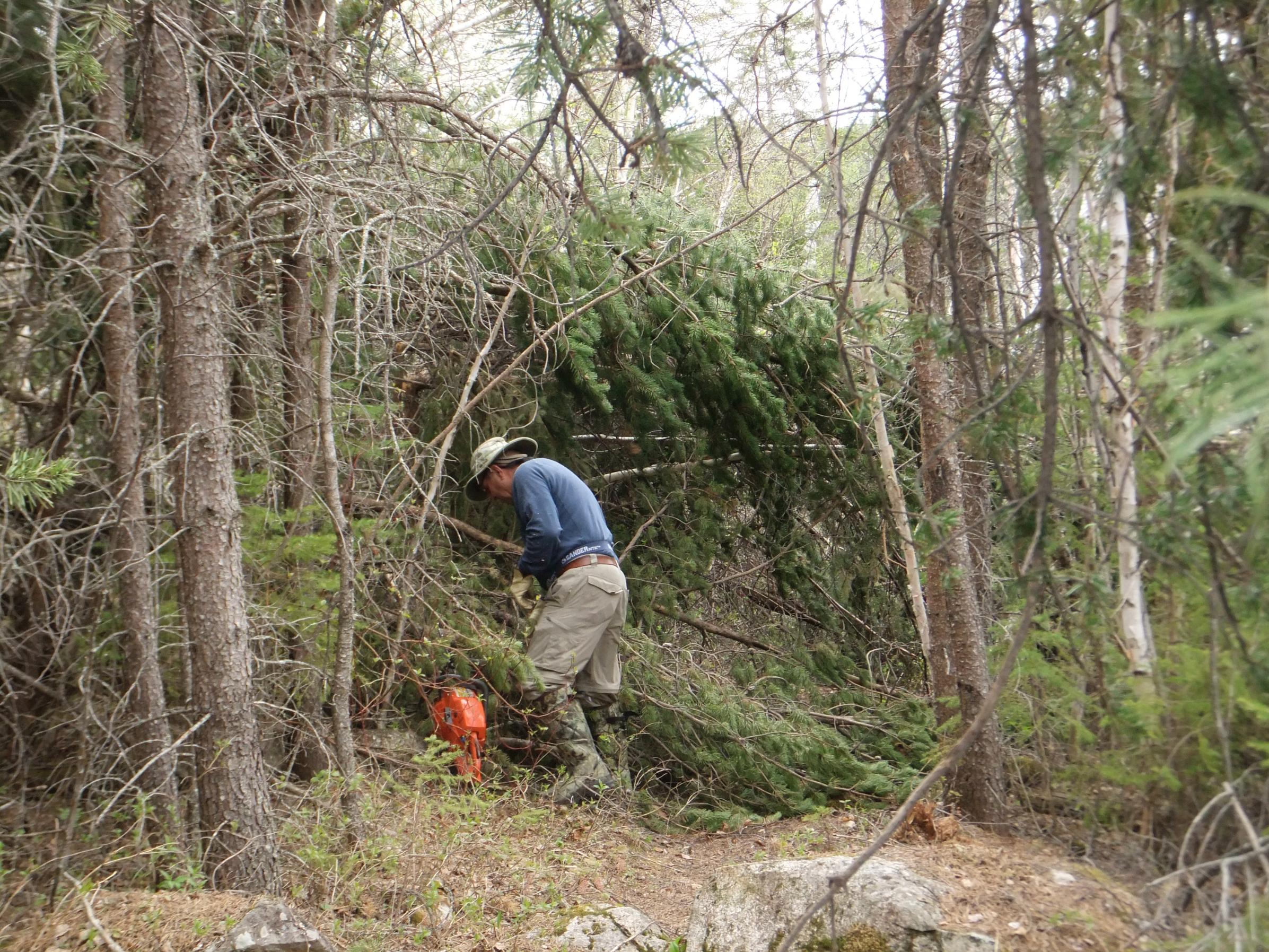 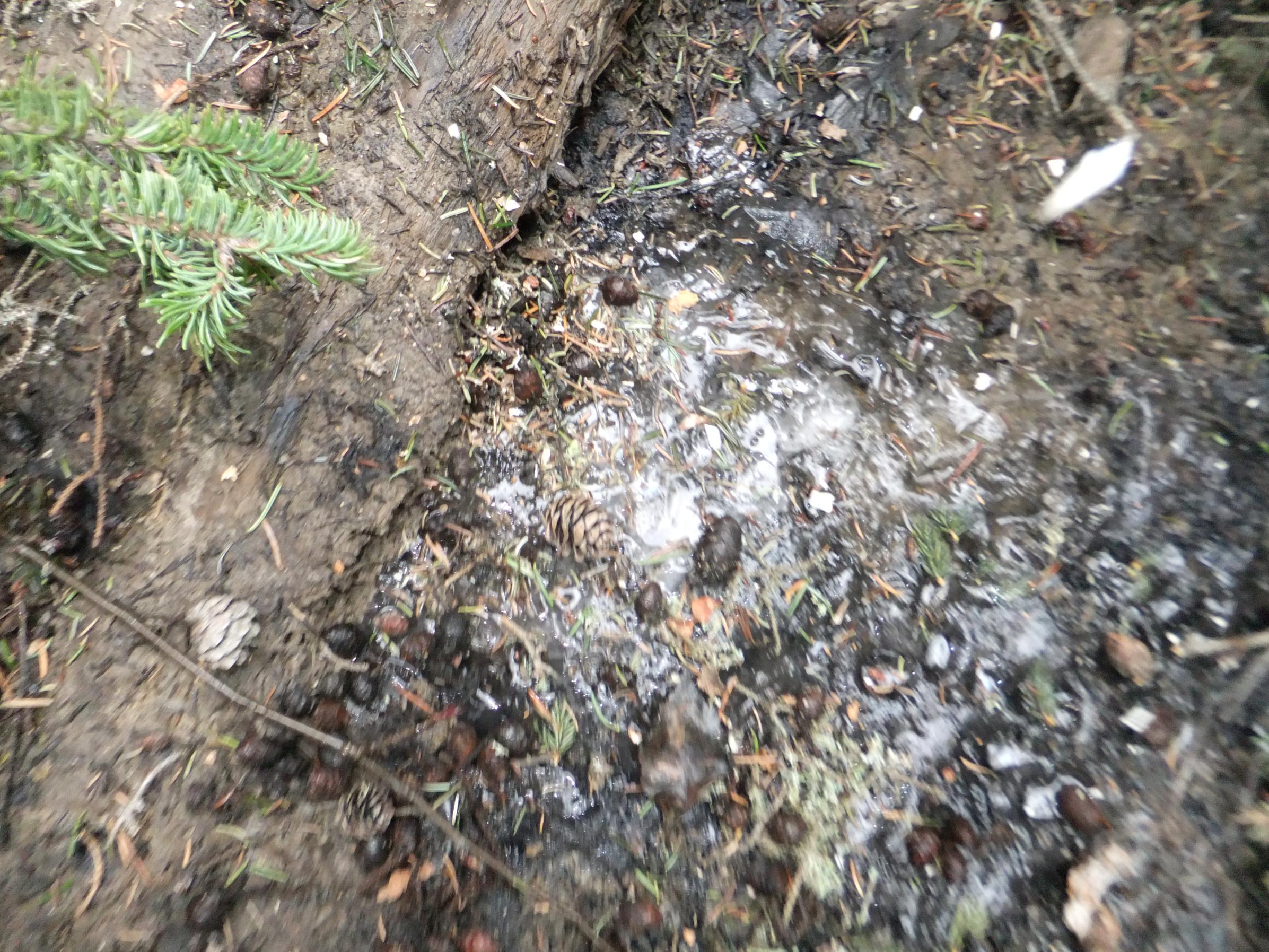 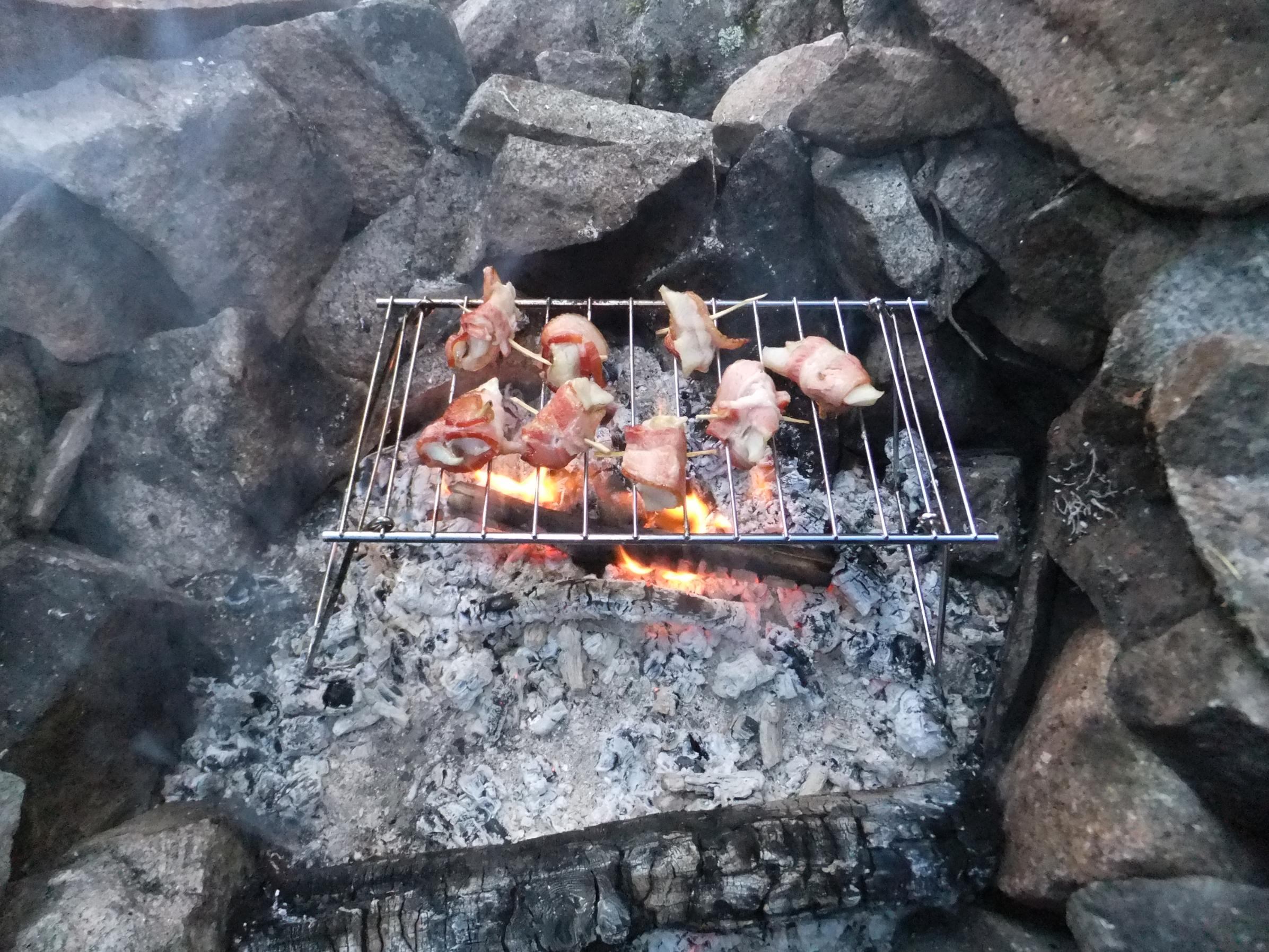 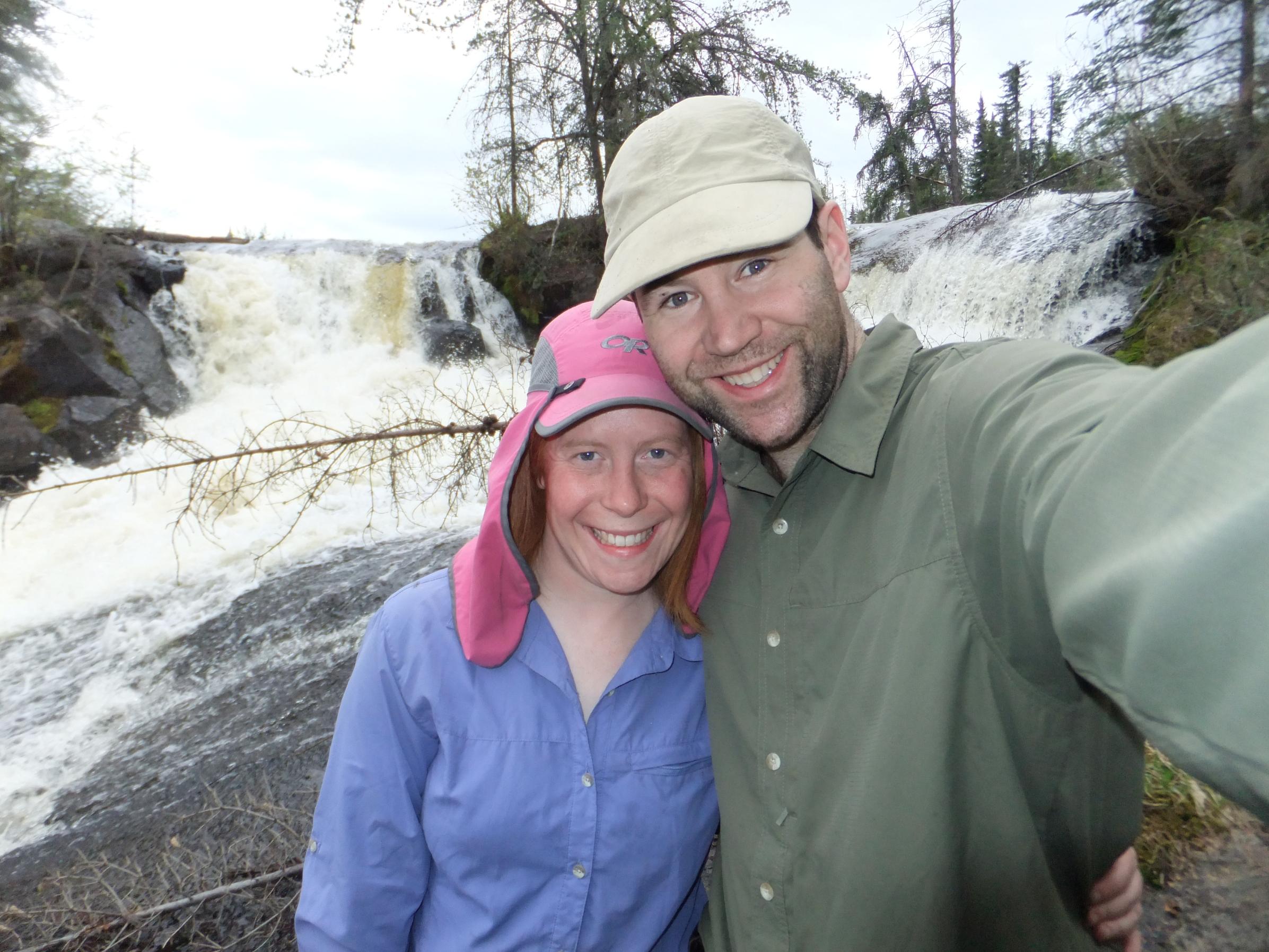 Wednesday we explored more of Glenn. It was amazing that in the bay around our campsite the water temp was 49 degrees. Going around the corner the water temp went up to 60 degrees! Last year in August we swam in water that was only 66-68 degrees! We were able to catch more fish today off our several different rock piles and points. We caught fish on gold and silver jigs as well as rapalas. Jenny caught a 30 inch northern also. We also became very good at losing our lucky lures. Supper this night was walleye jambalaya, cornbread, and bacon-wrapped walleye. Camp toddy was once again enjoyed over the fire. 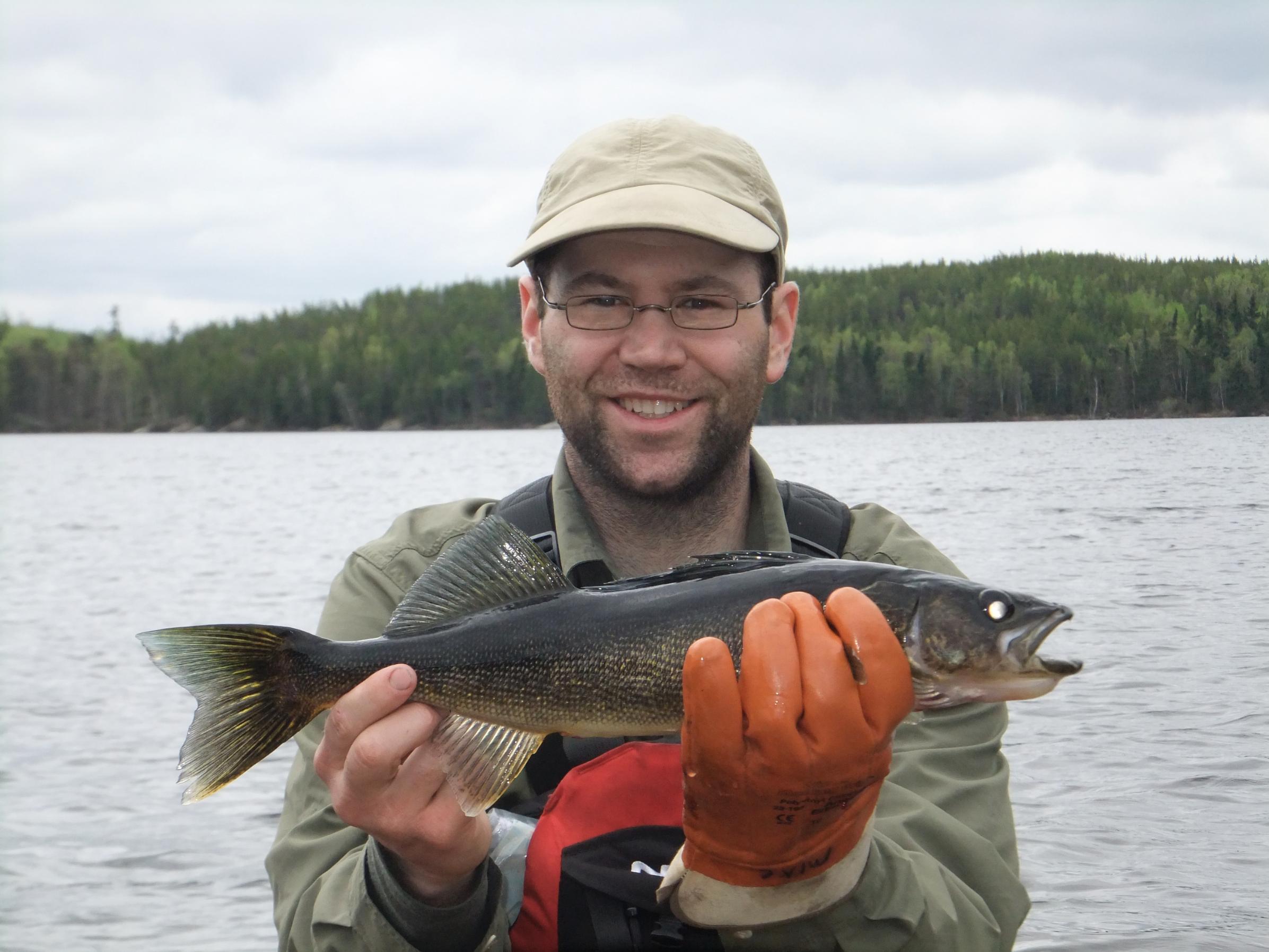 Thursday morning we slept in and had pancakes for breakfast. We went back out fishing and made anchors with rocks and parachute cord. We jigged for walleyes for a good portion of the day. It was beginning to get cloudy and windy so wild rice soup for lunch tasted very good. By 2:30 pm, it started to rain and only Chris and Paul went out fishing. Jenny, Mike, and Decoy stayed warm and dry next to the fire. Chris and Paul caught a couple more walleyes and we enjoyed walleye chowder for supper with biscuits. We also managed to have bacon-wrapped walleye as our appetizer for the 3rd time! Camp toddies were a must this night as it was cold, windy, and raining when we went to bed. We had to polish off our liquor as we were to be picked up the next afternoon. 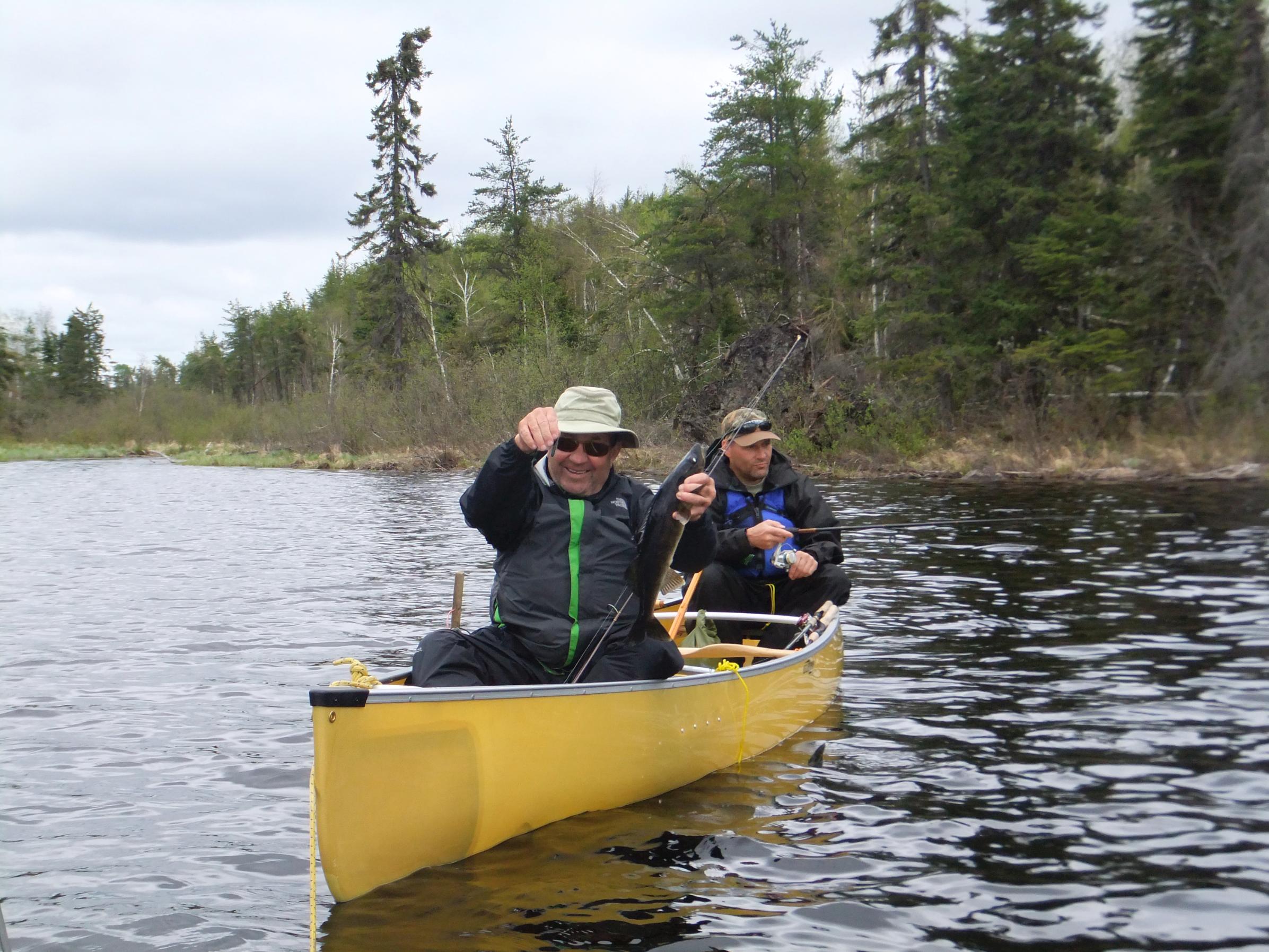 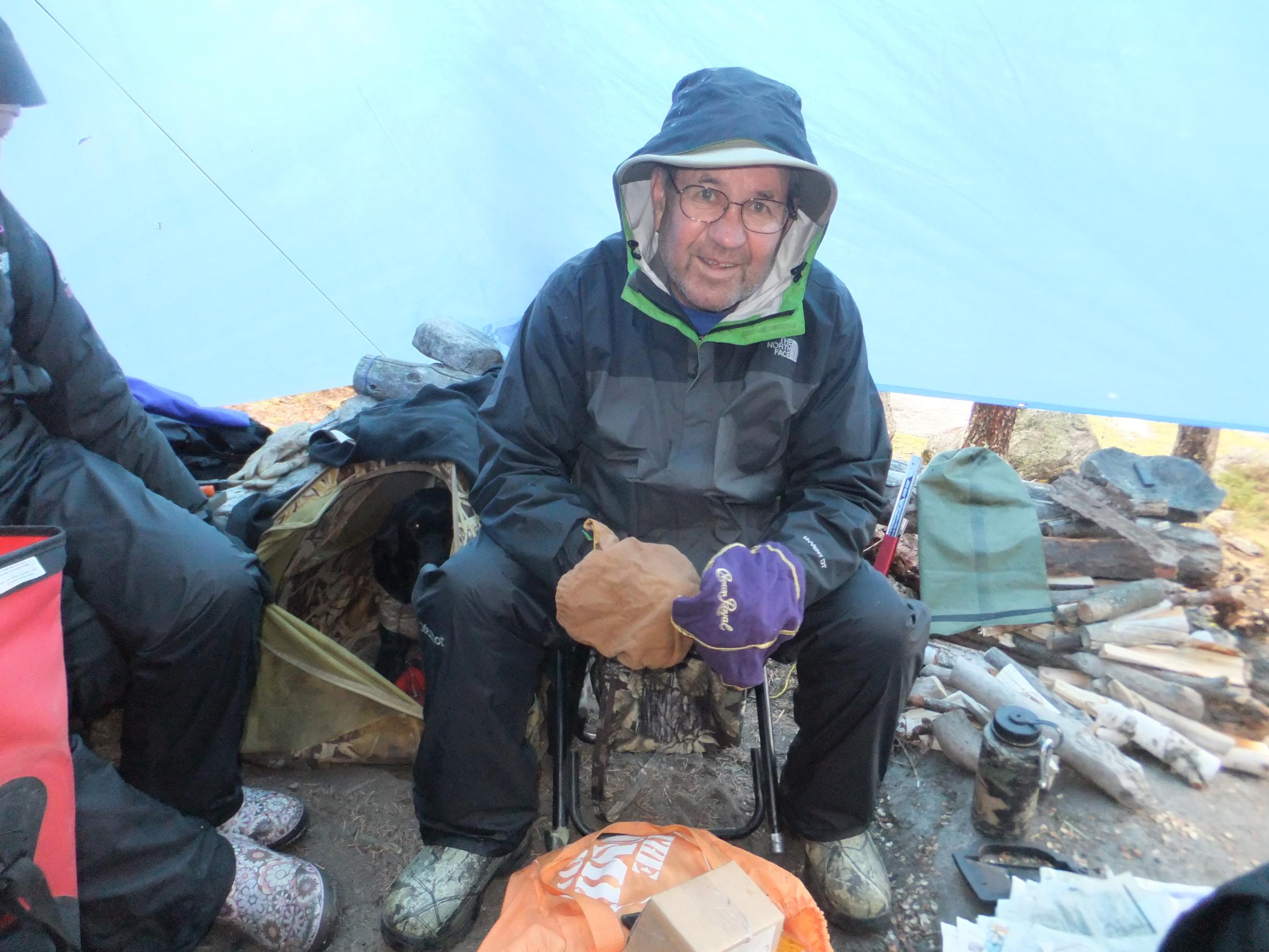 It blew all night long and we stayed in our tents most of the morning. Mike and Paul were set up right on shore allowing the wind to batter our old Kelty tent all night long. Several times, the items in the gear loft blew all over them and walls of tent bowed in. The only place they got wet was a small puddle where water had collected underneath them. Our new tent, a 1st Ascent, stayed nice and dry. We got the fire going early this day in order to keep warm while watching the rain and low ceilings. Our pick up time was 3:00 pm, so we eventually packed up our wet gear and waited under the rain fly. We never saw any planes this day and by 4:30 pm figured we were staying an extra day. While it was still raining, we jammed Mike and Paul’s tent a bit further back into the woods and re-setup camp. Mike mopped out the inside of their soaked tent with a Norwex towel and the rain finally subsided. But, the wind continued. We had plenty of extra food so we enjoyed chili that night and stayed warm by the fire. The only thing missing was camp toddy.

The wind blew all night and it was very cold. At 7:30 am the next morning, we heard our first floatplane. We flew out of our tents and watch the plane fly to the north of us. A good sign that we might get picked up. We started the fire again and packed up our gear. The wind died down and sun came out. We decided to head out fishing while we waited for our plane. Mike stayed in camp with Decoy and fished from shore. We caught our 6 fish limit to bring back home with us. About 1:00pm, a floatplane came into Glenn to let us know that they’d be back to get us in a couple hours. We headed back to camp to finish packing up and wait for our ride. Both planes showed up around 3:00 pm and pulled up to our sand beach. Before we knew it, we were back in the air headed towards Red Lake. We learned from our pilot that a floatplane had crashed on Red Lake Thursday, killing the pilot and his wife.  It was sad to hear this. 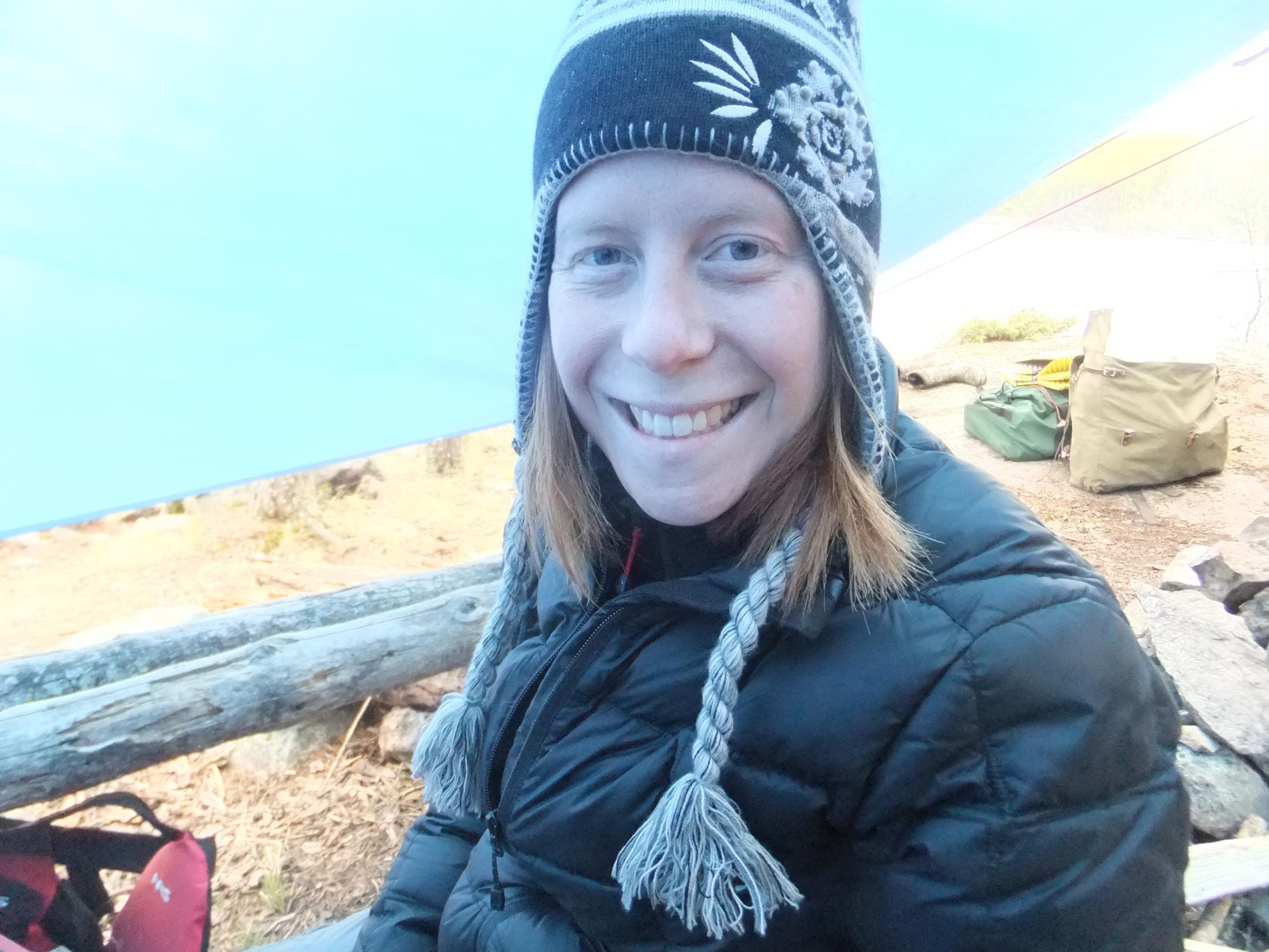 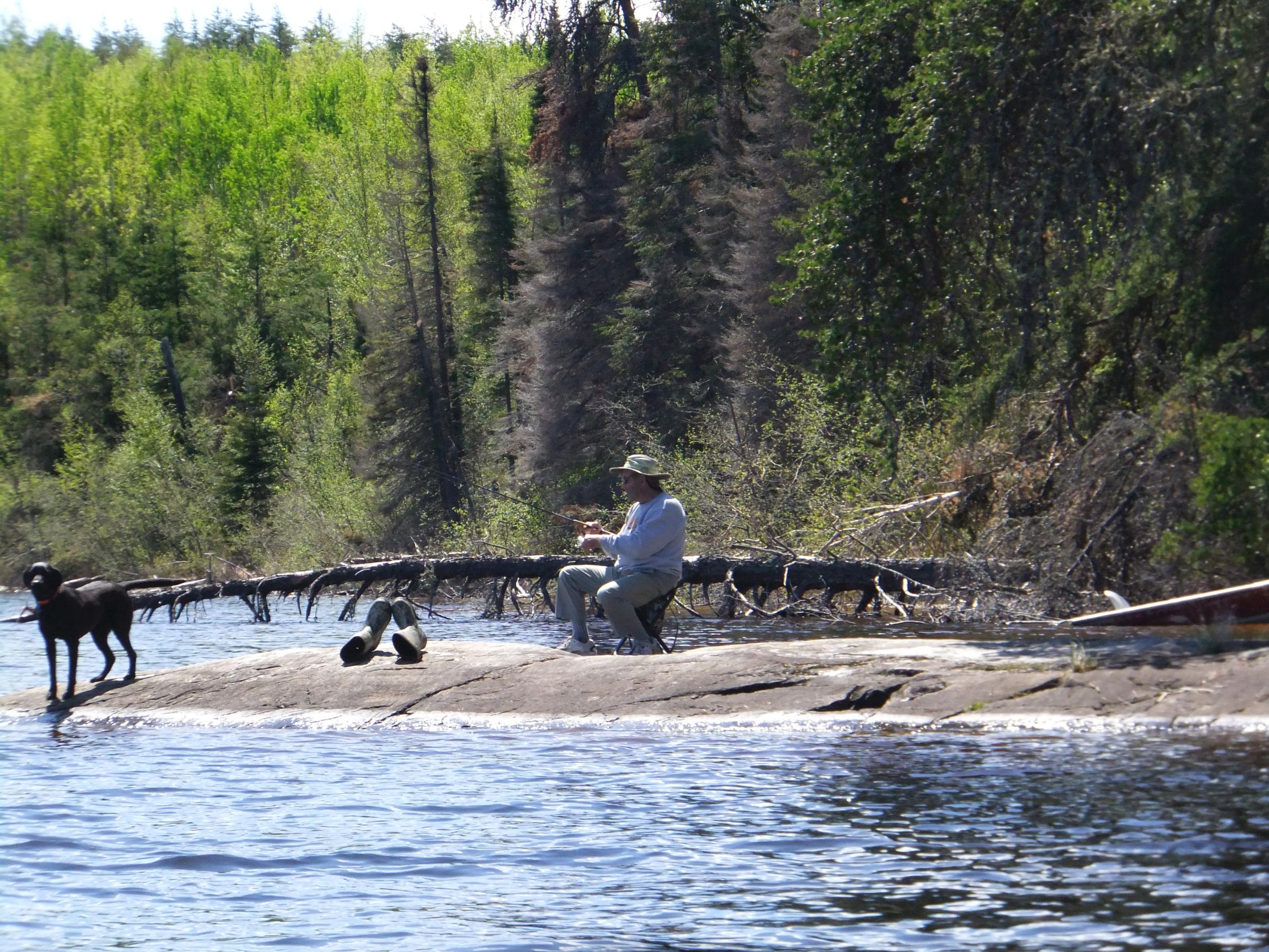 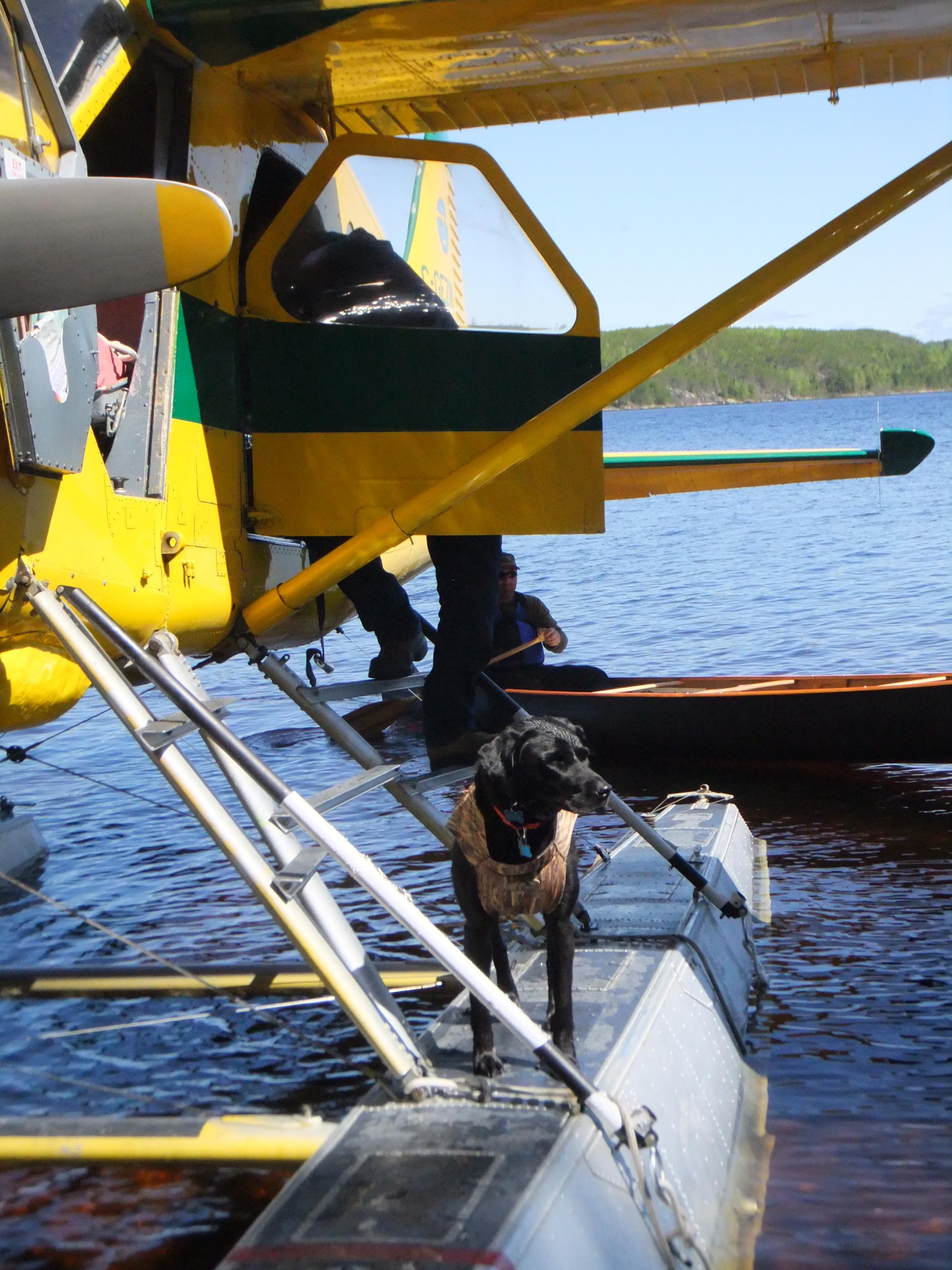 We arrived back in Red Lake and packed our gear back into the suburban for the long drive back to Upper Red Lake. Harlan greeted us when we landed and we were able to feed his dog, Kito, some jerky.  Jenny’s highlight of the trip! ? Harlan also shared us a great tip on strapping our canoe onto the car, he told us to simply twist the straps and amazingly, our trip home was nice and quiet. Thanks Harlan!!!

We had a fabulous time on this trip. We went 7 days without seeing a single person. We caught enough fish to eat it twice a day, and best of all, we escaped the real world. We had a lot of fun and are looking forward to our next camping adventure.