Southern Quetico - Around the Horn
by Beaverjack

Trip Type: Paddling Canoe
Entry Date: 06/11/2013
Entry Point: Quetico
Exit Point: Quetico
Number of Days: 14
Group Size: 1
Trip Introduction:
This solo trip was 3 months in planning. Originally, I was entering EP 16 BWCA with my bride, but after learning my vacation plans would need to change, and my wife was unable to change her's, Quetico became a possibility, particularly since I had 3 weeks total to spend away. My original plan was to travel to Burt Lake via Kashahpiwi, then double back through Joyce Lake and head north to Kawnipi Lake explore a few days, heading back south on Agnes Lake. My tow operator counseled me not to attempt the portage from Side Lake to Kashahpiwi, due to deep, extended swamp conditions there. This point was re-iterated by a group I met that had just passed through that area. Since I'm not a total masochist, my plans changed to travel to Burt through Sarah, heading west from Side Lake instead of north, thereby circumnavigating the problematic portage conditions. I'd then pick up my original route, heading back east from Burt to Kashahpiwi, then north - or, so I thought.
Discuss Trip: View Discussion Thread (7 messages)
Day 1 of 14
Tuesday, June 11, 2013 Slept at the Moose Lake EP and arrived at Canoe Country Outfitters at 6:00 AM. There was another group to leave early, but they slept in, so I was off solo in the tow boat by 6:30. After portaging my gear over to the west beach, I had to wait until 8:00 for the ranger (Cathy) to arrive and open up for business. Check in was quick, and I was off towards Baily Bay and my first solo trip in many, many years.
Upon arriving at the beach to Burke Lake, another solo tripper caught up to me. He was paddling a Wenonah Encounter, and we ended up pushing off at about the same time into a brisk wind, both headed to North Bay, where he was going to camp. I planned to keep going to Isabella Lake. My goal was immediately to keep up with the Encounter, if I could. Slowly though, the Encounter pulled away up the length of Burke. By the time he made the end of the lake, I estimate he was 1200 to 1500 yards ahead of me. Since he was using a single paddle, and making a lot of correcting strokes, I think the margin could have been more. He seemed to be zig-zagging from time to time, fighting with the wind. I took a more curving route towards the west shore, hoping for a bit of a wind shadow there. The Encounter was making a bee-line for the north outlet.
North Bay was ferocious. Stiff wind in the face, but no whitecaps, thank goodness. The Encounter guy checked several campsites on the north side of the lake, but I couldn’t see where he found one. I lost track of him.
Once making the portage into the no-name lake heading NE towards Isabella Creek, my spirits were high. Then came Isabella Creek – a meandering, swampy stream that I was to pass against the current, and into the wind. After a couple bends, I was wishing I was in my old Argosy. The Prism handled like a freighter. Getting up a head of steam on straight-aways made the sharp bends even harder to make. A lot of the forward motion required getting out of the boat, and towing it. When I arrived at the lake side landing of the portage from the creek to the lake, I met 4 guys who were leaving after 11 days in Quetico, having made the Agnes-Kashahpiwi loop reverse of what I was planning. Like the outfitter, they cautioned me about the portage between Side and Kashahpiwi lakes. The older guy (father?) looked ragged, and said he wouldn’t do that portage again for anything, and was looking forward to getting back home.
There are 2 campsites marked on my map on Isabella Lake. I didn’t see any other likely spots on the east end of the lake, so I headed straight for the site showing just west of the narrows. It was occupied by...Encounter guy! I paddled on and took a site across from the portage I would be taking the next morning. It was a decent site, and by the time I got camp set up, I was looking forward to that first mountain margarita. The bugs were bad¸ but my suffering was abated by the wind. I retired early so I could get an early start. 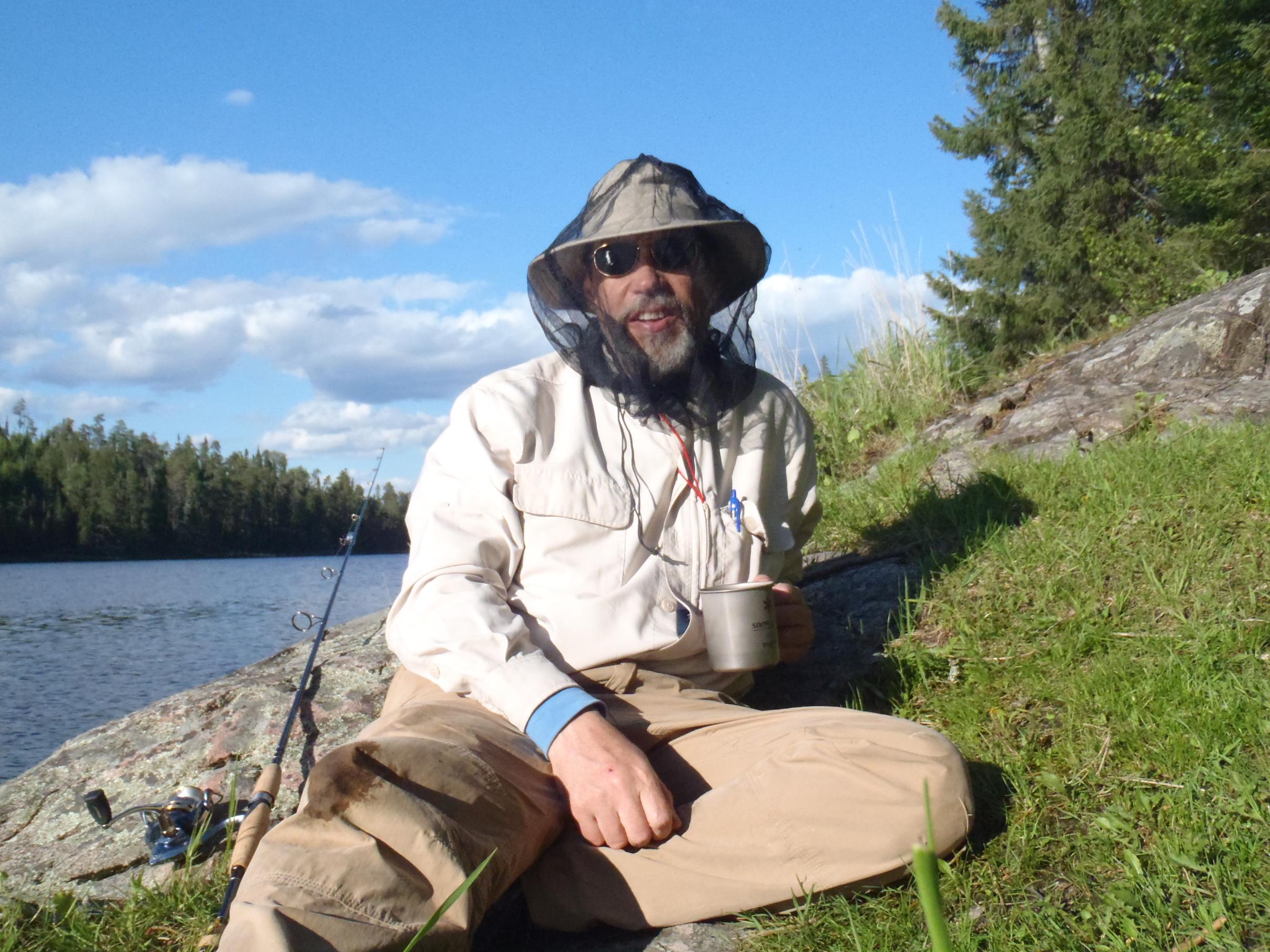 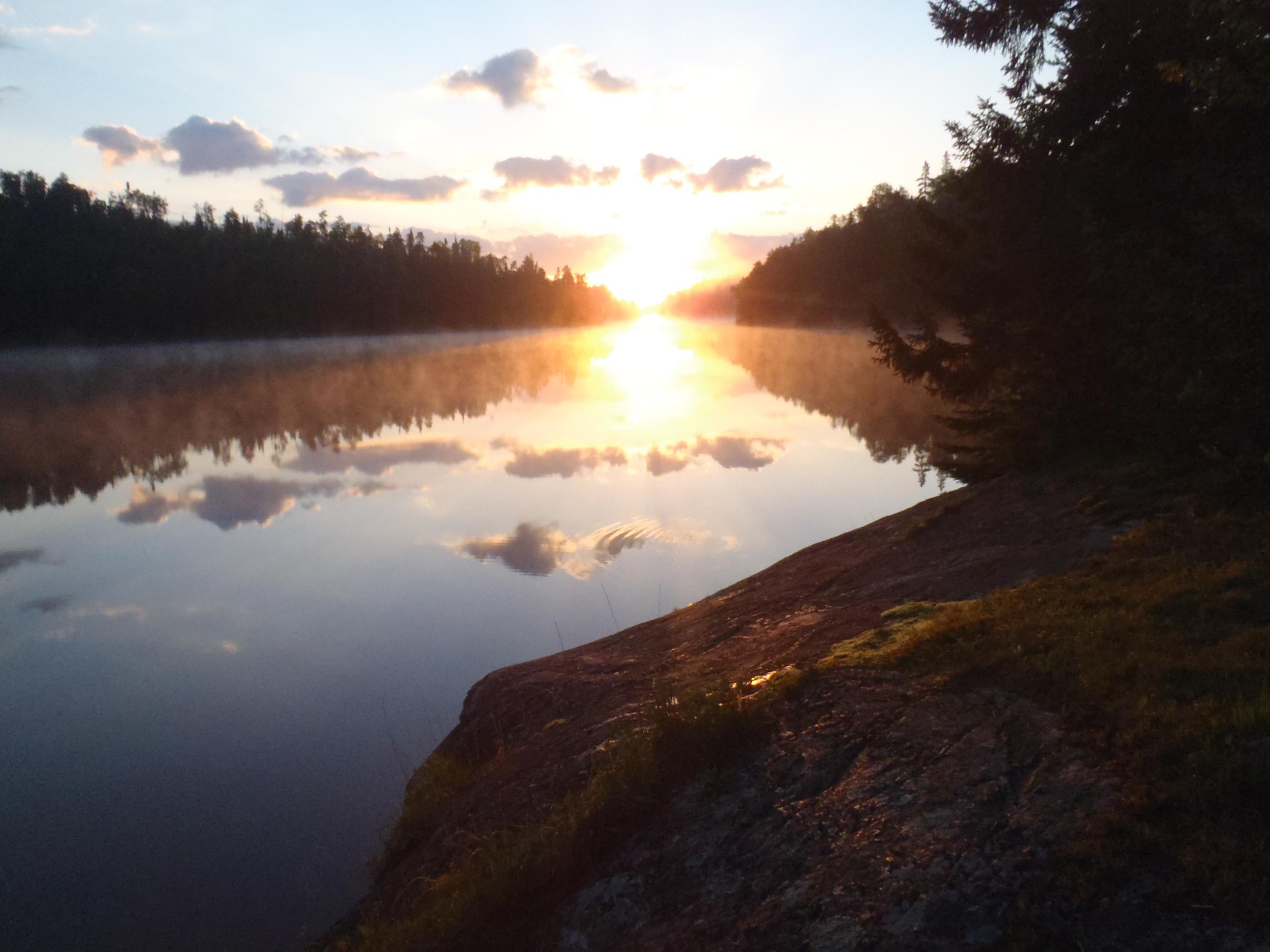