The rain finally relented for good at some point during the early morning hours. Still, everything was damp & wet as we arose to yet another cold, misty morning. The campfire stubbornly resisted my initial efforts but, persistence eventually paid off. Breakfast was scrambled eggs with pork sausage & onions, under a noticeably sagging, yet still quite dry (below), CCS tarp. 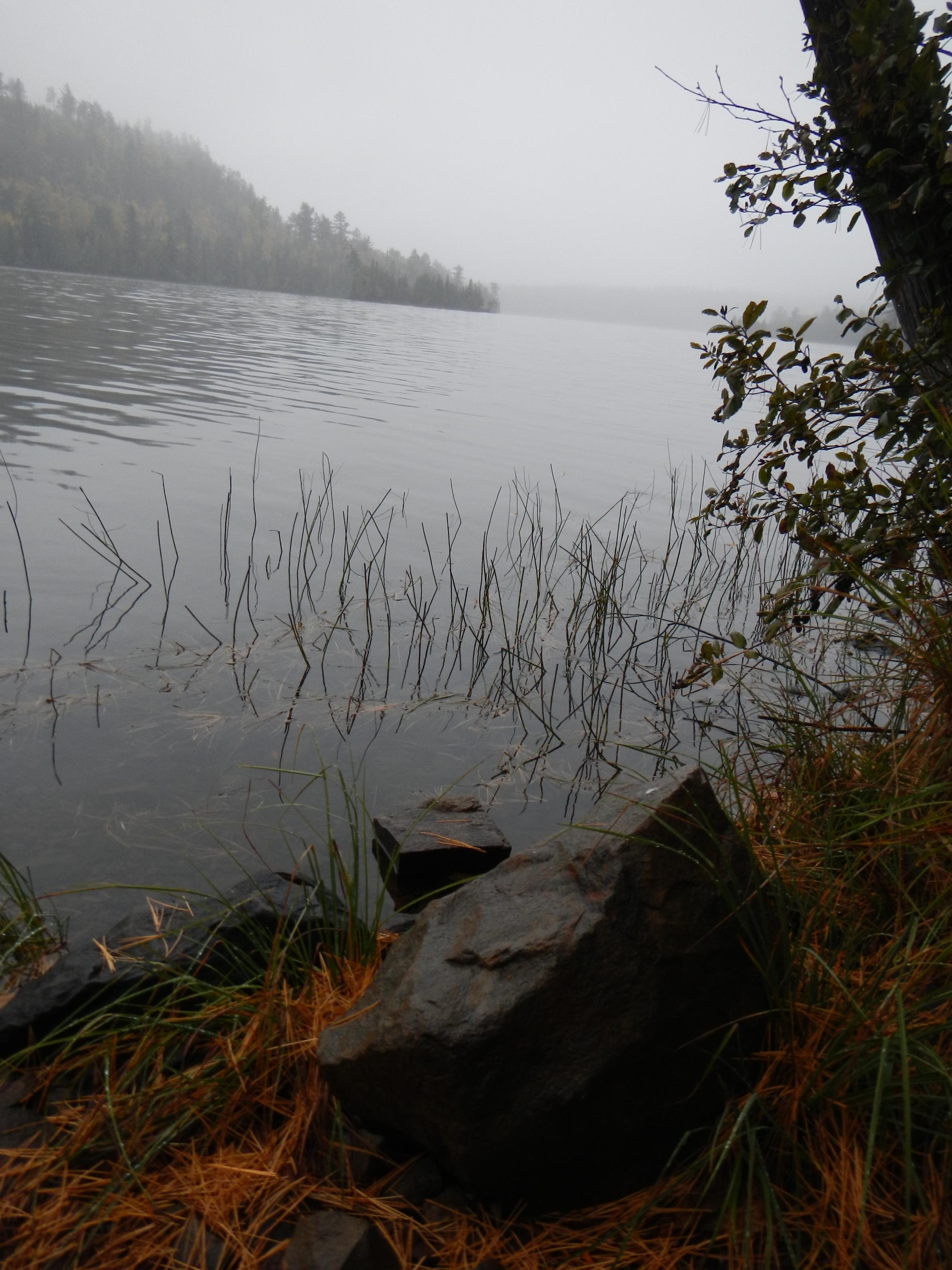 After breakfast we loaded up the Black Pearl to start our day trip. Gloomy gray clouds once again dominated the skies throughout the day, but, the wind & rain stayed away.

There was a prescribed burn in this area back in 2003 or 04. The understory has since filled in quite nicely, so at first flash, it isn’t readily apparent. However, many of the large, mature shoreline trees possess a conspicuous charcoal hued ‘shadow’ that serve as a tell tale reminder.

We paddled east down the lake heading for the ‘long portage’, tracing the northern shoreline to the peninsula near the eastern end of the lake where we planned on crossing to the other side. Just as we were pulling away we passed a small opening on the peninsula which revealed a cow moose & her calf browsing down by the lakeshore. They slowly retreated back into the underbrush, making getting a decent photo a futile affair. Being October, it was alarming at how small this calf still was. Possibly the late, cold spring had delayed its’ birth? Or, perhaps, a mild winter was in the offing?

As we cut across the lake in an eastern direction, we could readily discern that the campsite there was occupied by some hikers. This new discovery made claiming our campsite when we had, an ever more astute decision. [paragraph break] Arrived at the portage to discover a landing that was quite rocky, but, manageable. Once we started down the trail, it instantly revealed a very level open path all the way to Rose Lake. This portage is very unique for a multitude of reasons. The first thing most people will notice (even before attempting it) is that this portage is very long. In fact it is actually called the ‘long portage’ on many maps. Additionally, it is actually part of the Border Route Trail (B-R-T) used by hikers, with a spur running south to Daniels Lake. And, of course, it is also part of the historical Voyageurs’ Highway. (Grand Portage Neuf) However, the trail has been dramatically improved since the day of the Voyageurs.

The reason the trail from Daniels to Rose was now in such exemplary shape can be attributed to the fact that the path runs over the old (long since abandoned) logging railroad bed. The significance of this old rail line with respects to shaping many important features in this section of the BWCA cannot be overstated. From its’ terminus at Rose lake the line ran SE then traced the eastern shore of Daniels lake, (this is now the Daniels Lake Hiking Trail) before heading towards Clearwater Lake.

There were several spurs in the Clearwater/Caribou Lake area which are now also portions of portage trails. Then the line meandered towards Poplar Lake before turning SE. From there it headed towards the Twin lakes. This is now the Lima road that serves the Morgan, Ram & Bower Trout EP’s. Then it cut over towards Two Island Lake and ran west. This is now the gravel road called The Grade. Brule, Homer, Baker & Sawbill are all served from this road. This doesn’t even take into account the non – BWCA areas it opened up. 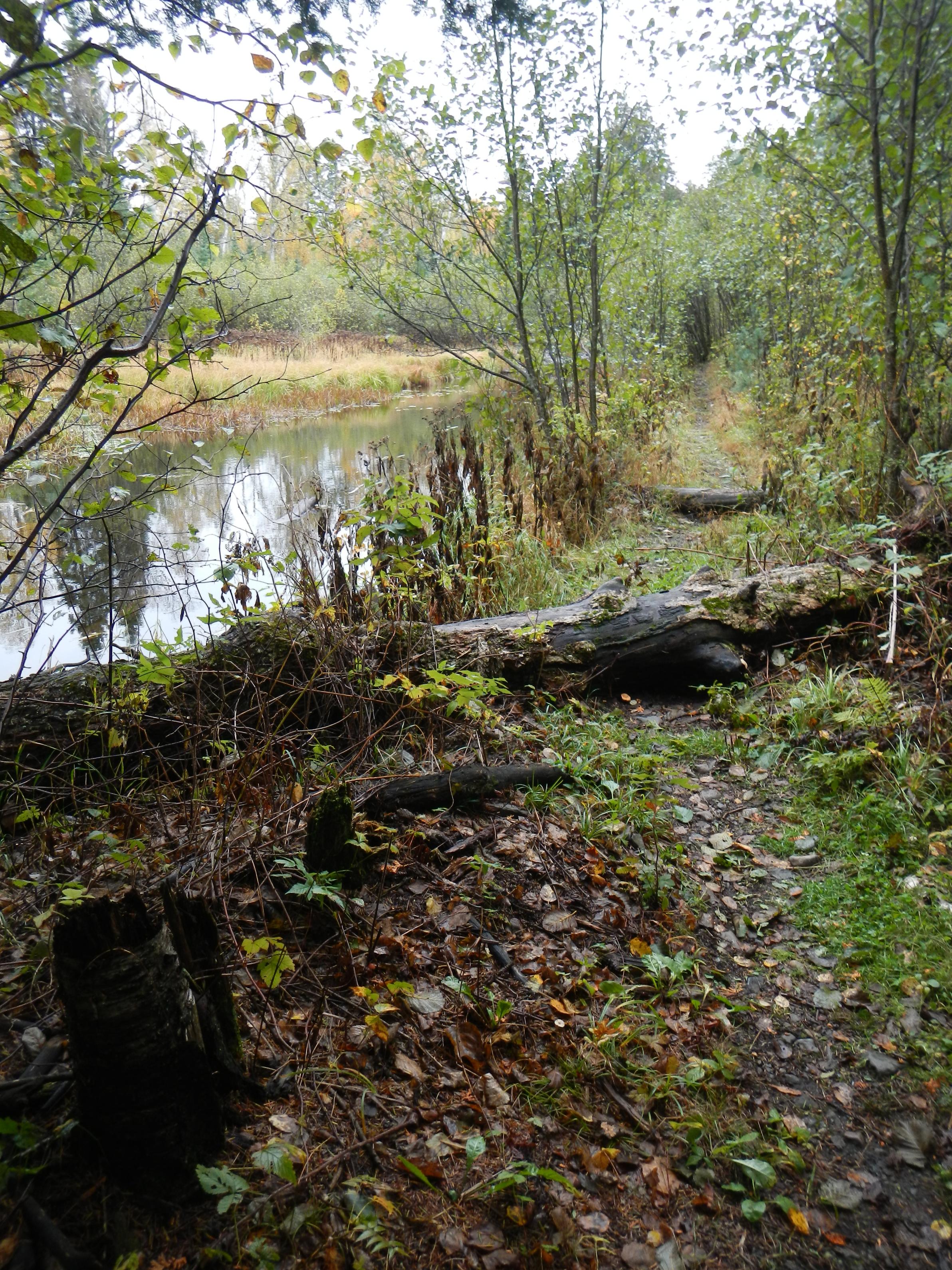 The Long Portage certainly lives up to its’ name. Even though the trail is flat & well established, I must admit the length started to make my mind wander a bit – wondering to myself if perhaps we had taken a wrong turn, or something of that nature. Alas, we eventually came out on Rose Lake to set my doubtful mind at ease. In the final analysis, I don’t believe a portage of this length could’ve realistically been too much easier. It was a very flat wide open trail the whole way from Daniels to Rose. The only notable hindrances were a few slightly muddy spots, and various fallen logs along the way that were all easily stepped over. However, the trail did skirt a small stream for much of its length. So, dependant on the mood of the local beaver population, there could be a possibility of some sections being flooded.

As we paddled west across Rose there was an unexpected, noticeably striking, scene along most of the shoreline. The incessant pounding of wave’s yesterday afternoon had produced a foamy outline that starkly contrasted with the dark colored shoreline rocks, making it look like someone had sprayed whipped cream all along the edges of the lake. Fortunately we didn’t have to deal with those conditions today. 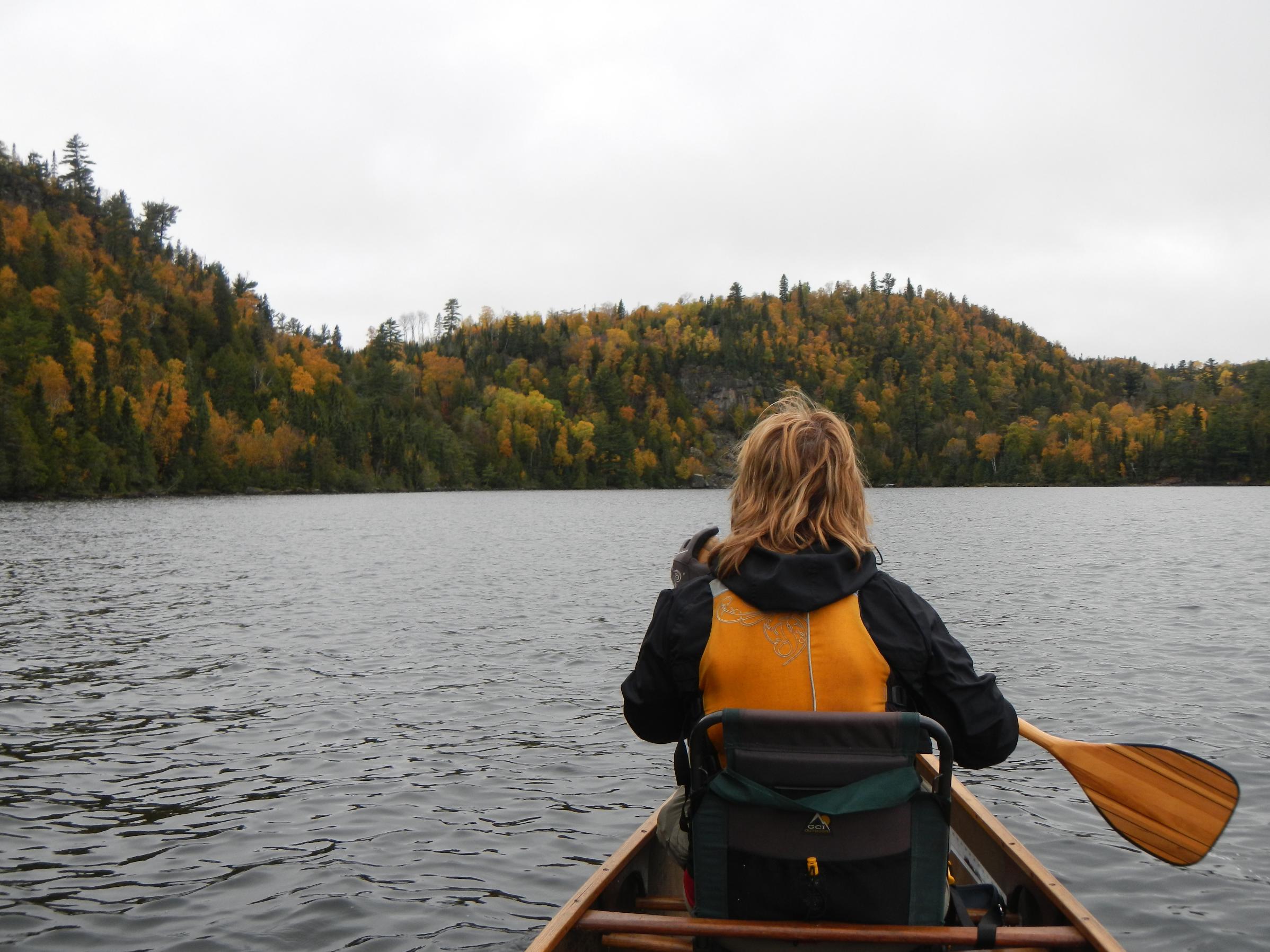 Even though it was a gloomy day, Rose Lake did not disappoint & we were still able to satisfactorily contemplate & appreciate the majesty of the fall colors.

Stairway portage beckoned. Our plan was to hike up to the western overlooks. (Overlooks, which we didn’t hike to, are also located to the east along the B-R- T.) Since I didn’t want to have to portage after getting back, I hauled the Black Pearl to the Duncan lake end while Vickie enjoyed the waterfall area. 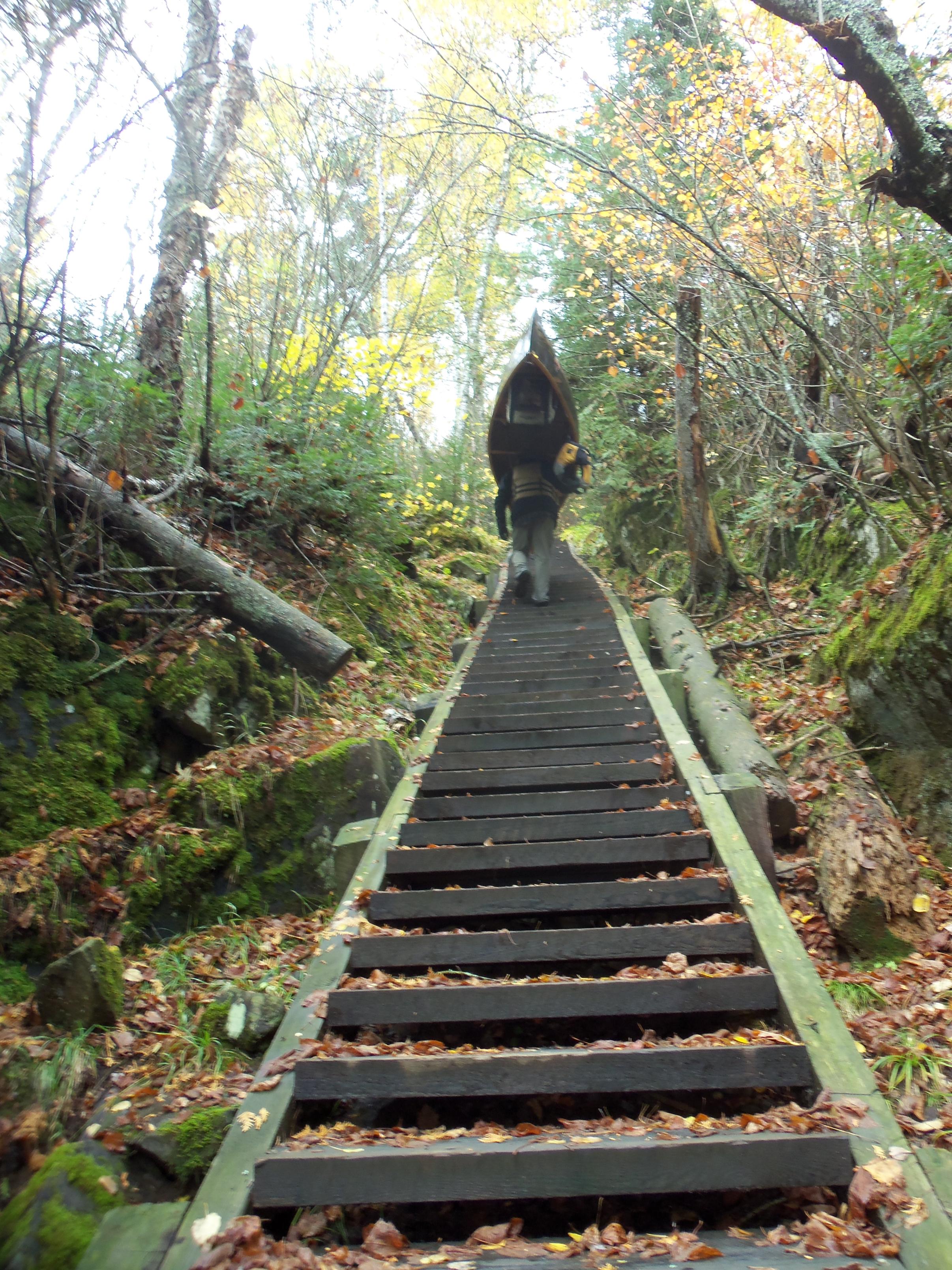 Afterwards, I caught up with Vickie and we lingered in the immediate area of the waterfall, exploring & appreciating the various perspectives from which it can be viewed, including the small bridge just above the falls. After the customary battery of photos, we pushed on west up the Border Route Trail. 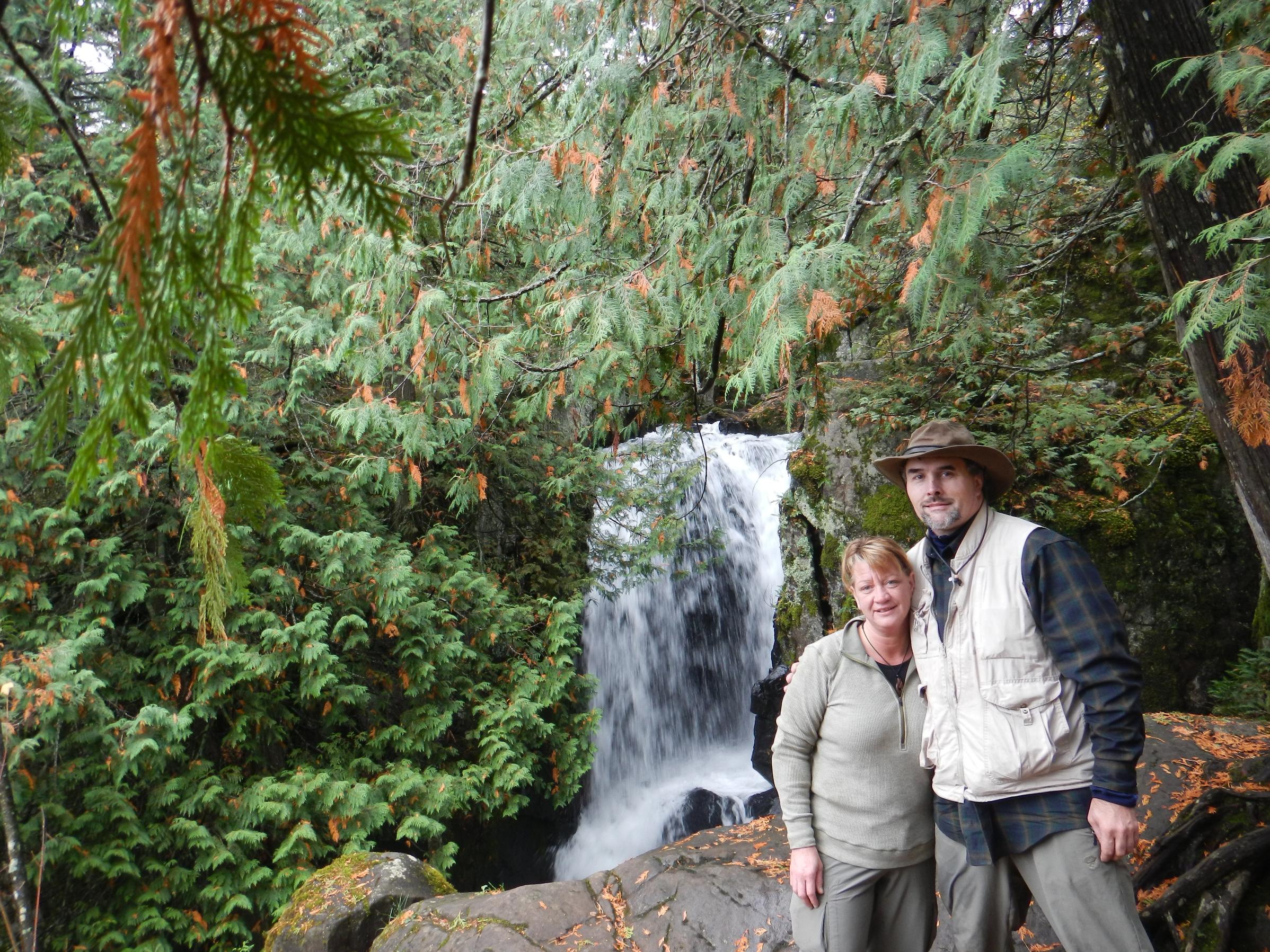 This is a very demanding section of the trail. Fortunately the top notch scenery along the way helps compensate for the exertion expended. And, for me, just being in the woods on a crisp autumn afternoon was stimulation enough. There were multiple steep sections, a couple where Vickie even got down on all fours to climb. Yet again, it seemed the distance the map showed was deficient in comparison to how far it seemed we actually traveled. But, eventually, we arrived at our destination & our perseverance was amply rewarded with a truly spectacular -breathtaking vista. Of course, a valid argument could be made that breath was in short supply by the time we got there, so there wasn’t much left to take. 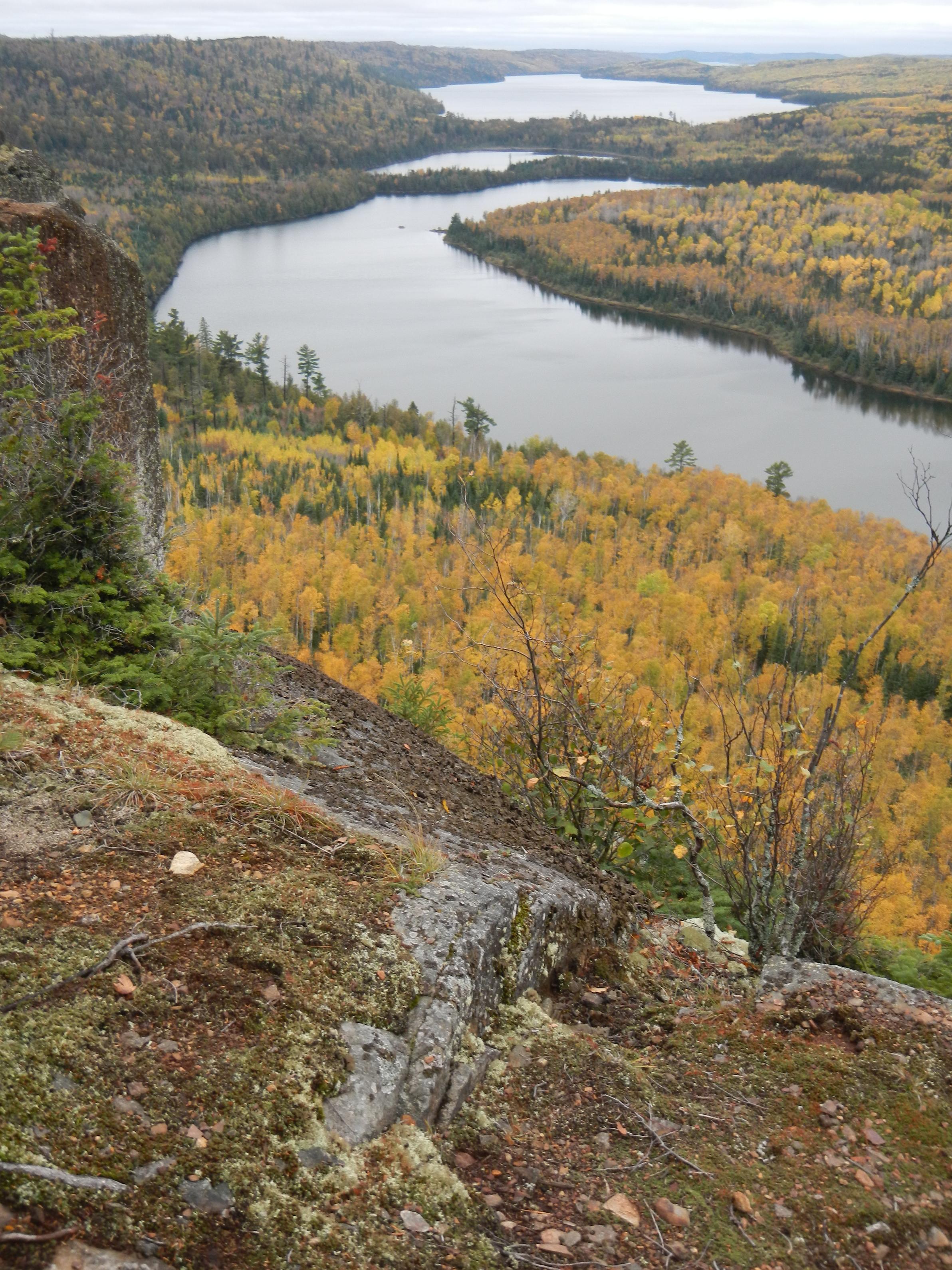 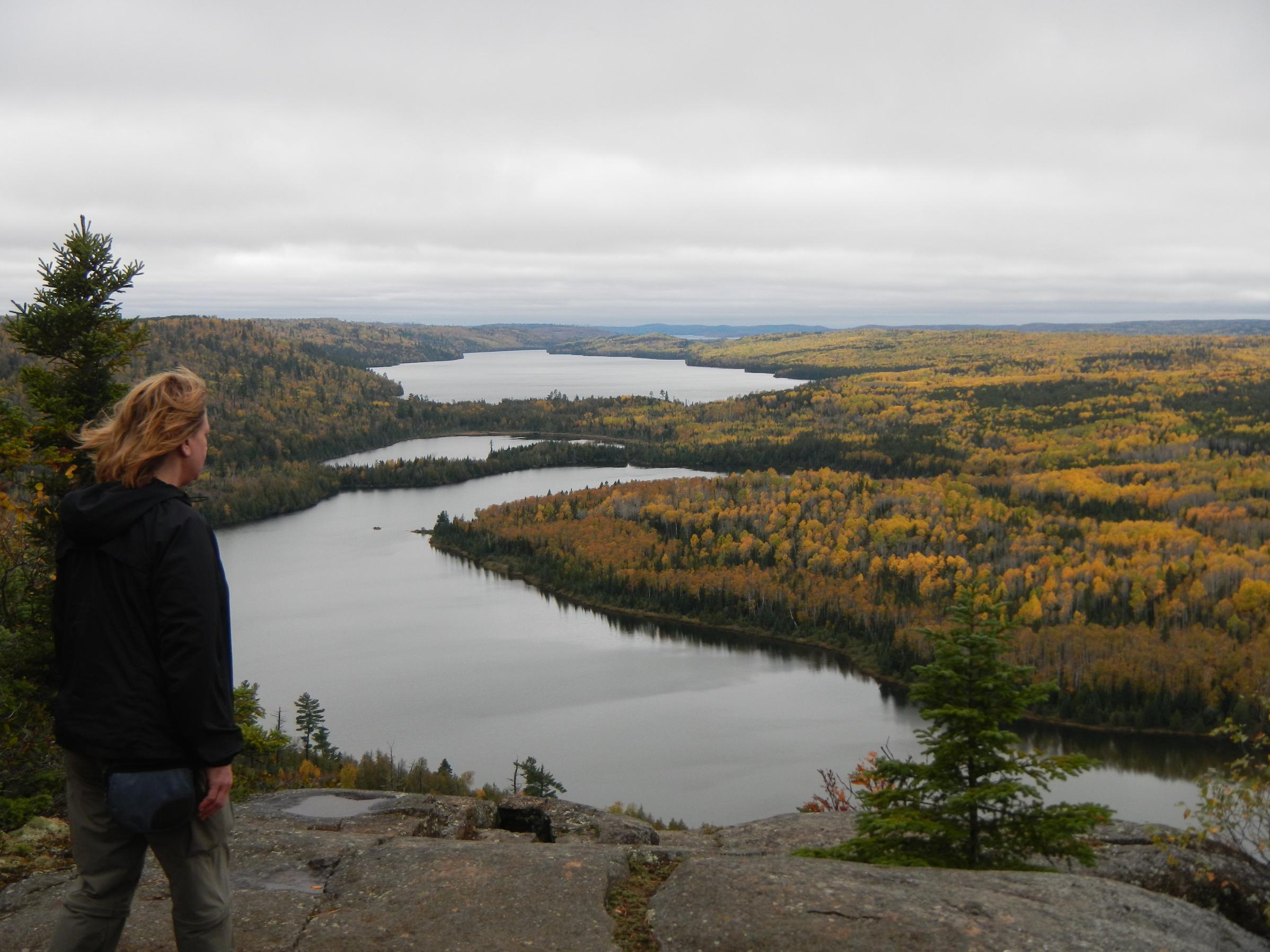 IMHO these are the most impressive, extensive vistas in the whole of the BWCA. Rose, Rat, South & even North Lake can all be viewed from this panoramic vantage point. After having sufficiently admired the scene, we grabbed a Clif bar snack and headed back. Obviously, we were walking on the exact same trail going back but, there was also a new perspective of looking at things while heading in a different direction. It seemed the trail was easier to traverse going this way as well. 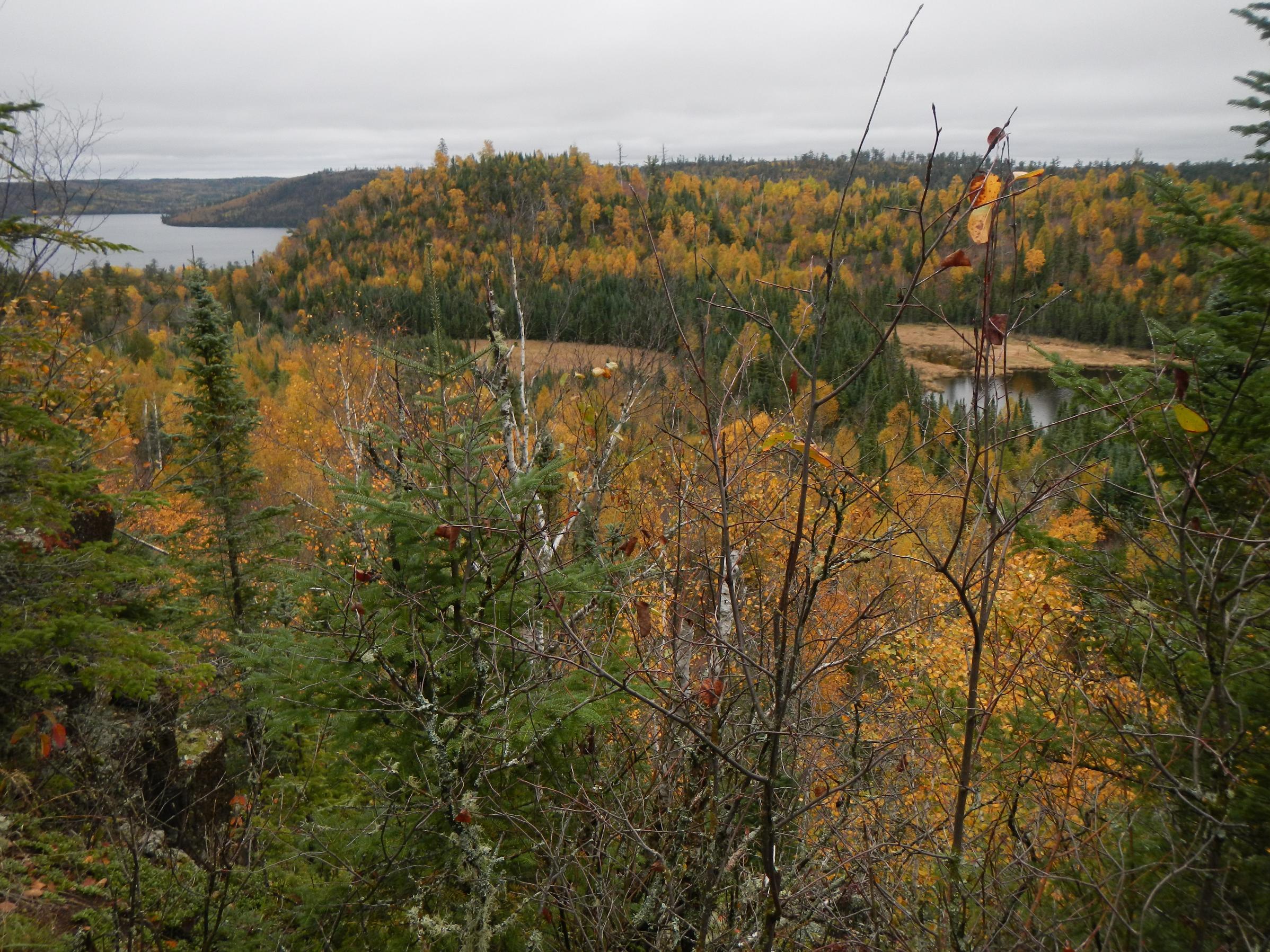 About half way back, we were startled to run across another couple heading to the overlook. After some brief conversation, we were further startled another 100 yards down the trail when we came across a trio of men also heading the same way. Quite the popular trail! Armed with the fresh indelible images in our minds, we completely understood why.

Soon after, we linked back up with Stairway Portage. Being an admirer of old trees, I stopped to appreciate the enormous cedar tree near the Duncan end of that portage. We then sat & rested a bit before switching back to canoe travel.

I’m not absolutely certain, but I’m guessing doing this loop the way we did was probably illegal? Since, after portaging out of Duncan, we actually exited the wilderness on West Bearskin before re-entering again on Daniels. I felt we’d be OK since the government shutdown was still in effect. Plus, the reservation season ended September 30th & I didn’t feel we would be negatively impacting any ones’ wilderness experience. Besides, we’re both rebels at heart! Worst case scenario – we’d just fill out another permit.

Without impending weather to worry about this time through, we were better able to appreciate the outstanding scenery Daniels Lake provides. There was a nice little rock slide just below the cliffs along the western shore that we’d missed coming in. Not to mention the other small cliffs, islands and the undulating rolling hillsides that formed much of the lakes shoreline profile. All of this majestically crowned with the incomparable autumnal glow of golden birch leaves.

One of the undesirable consequences of camping on an entry point lake is that you can be all but assured that the campsites are going to be well worn/used. So, finding legal firewood can often be an exercise in futility. With that in mind we scoured the shoreline near our camp & found an awesome sun baked cedar that (with our current supply back in camp) would more than carry us through. Although, without the saw along, we must’ve made quite a comical scene transporting this completely intact tree the couple hundred yards back to camp.

We had a welcome surprise upon returning to camp. Even though it had been gloomy all day, most everything had dried. We ate leftovers for supper then, later, enjoyed our libations while watching intermittent shining stars appear in the sky, as the clouds were finally beginning to break up. Vickie jubilantly discovered that the cinnamon crème rum she’d brought was an absolutely decadent treat when mixed with her coffee or hot cocoa. 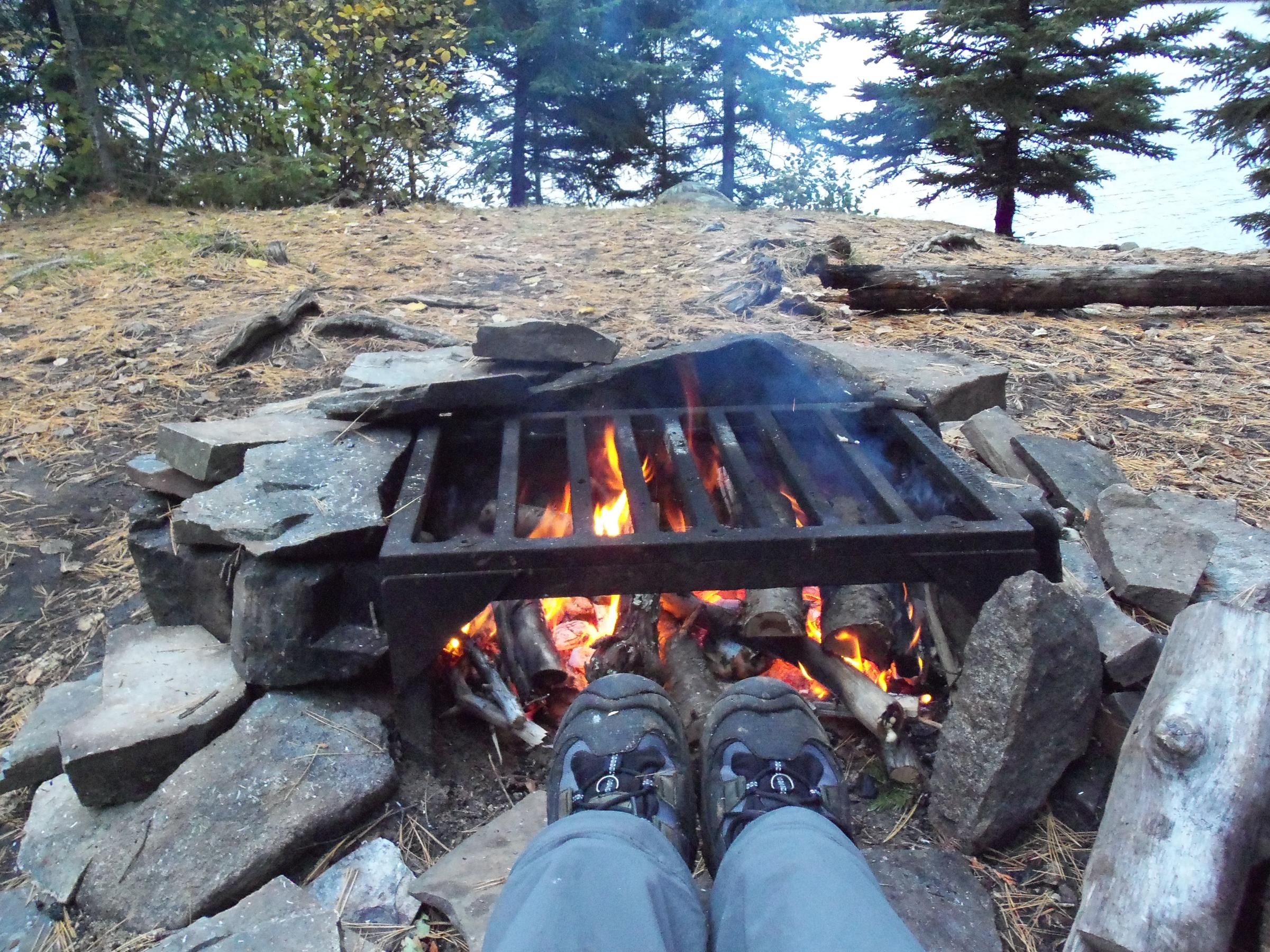