Trip Type: Hiking
Entry Date: 12/31/2011
Entry & Exit Point: Moose/Portage River (north) (EP 16)
Number of Days: 3
Group Size: 2
Trip Introduction:
While many might not be thinking about snow while summer is still with us I've been getting the itch for colder months. Thought I would share a little trip a buddy and I did a while back. We actually entered at EP11 not 16 but the drop down menu doesn't allow for that selection. With minimal snow that year we decided a lake trout expedition was in order.
Discuss Trip: View Discussion Thread (3 messages)
Report
I talked my friend into this trip over several nights. It had been in my plans for far longer than his I assure you. Maybe he was drunk when he accepted my offer but that's beside the point now.

The plan was to hike into Oyster Lake on New Year's Eve and be some of the first to hook into lake trout in the winter season. With snow averaging about 4 inches on the ice it sounded like a cake walk. We were both in fairly good shape and did a lot of walking and outdoor sports--nothing we couldn't handle.

We each packed up our own sleds to pull in with us. Much of this preparation was done in the weeks prior to our heading out into the bush. We somehow managed to wedge food, sleeping gear, fishing rods, tip-ups, tackle, and bait into two small plastic sleds. His was larger and actually equipped with a sort of belt harness to make pulling it easier. Mine being smaller I figured would work just fine with a long lead and plenty of forward momentum.

The night before we headed out on our glorious adventure we staged at my old man's house. Here we looked over the map several times receiving input from a man who has traveled more of this land than many have a right to. Our plan remained relatively the same except we would be entering on an old road running east/west toward Meander Creek rather than EP16. This would cut off a portion of our trek as we followed the meandering creek in a general northish path.

All suited up and heading out with the sun just peaking above the horizon we set out with our gear. 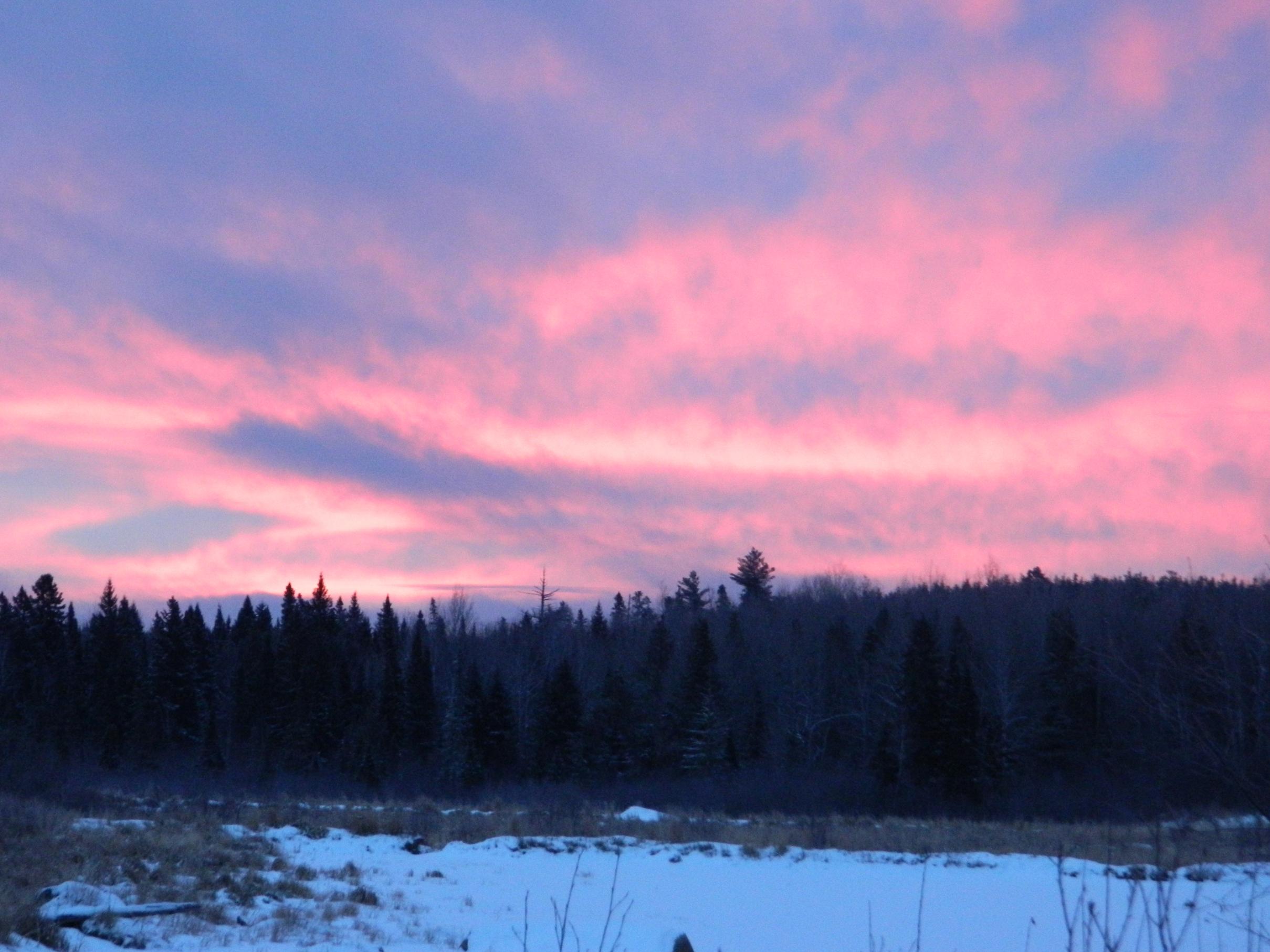 The initial walk was downhill and since we were full of excitement quite enjoyable. Once on the creek we struck out on some previous dog sled tracks that made going easier. But oh did that creek meander... 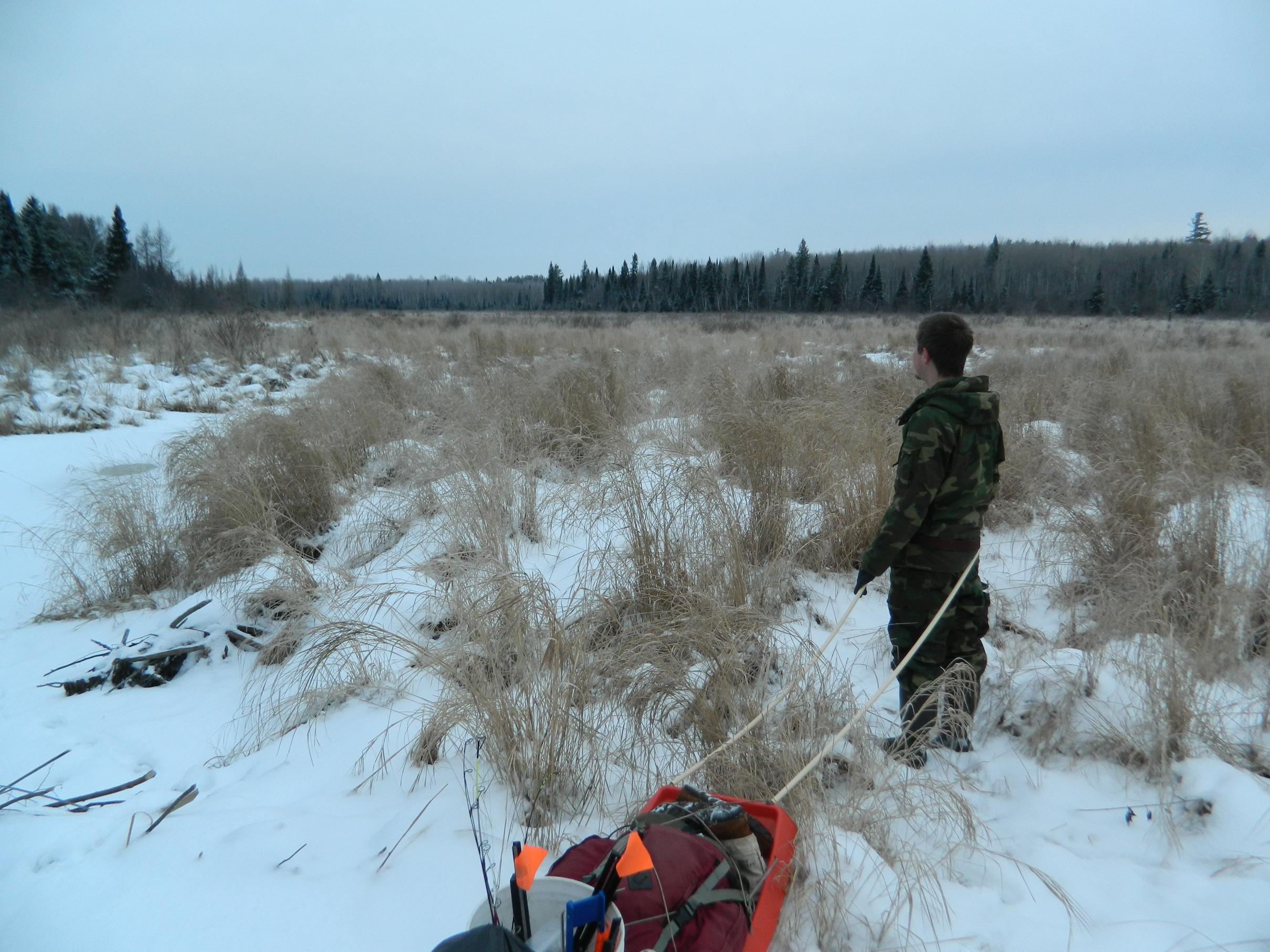 With spirits high and energy still peaking we pushed through thick brush and downed trees to avoid open water at narrow points along the way. Only one foot took a dip through thin ice--and it wasn't mine so it didn't seem all that big of a deal. Our hard work paid off when we hit thick ice on Ramshead Lake. Time to take a break, cook some food, and snag some pike. 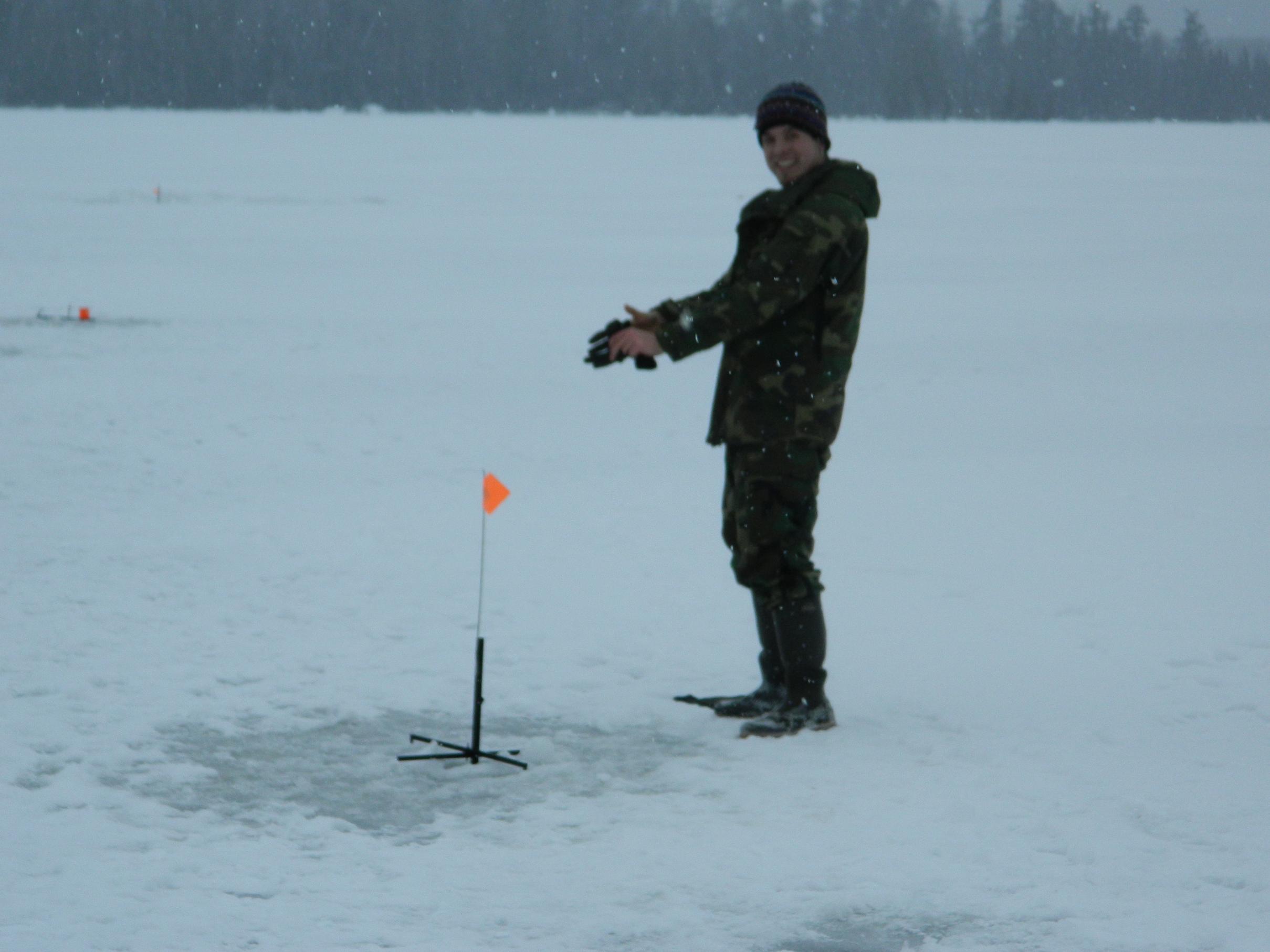 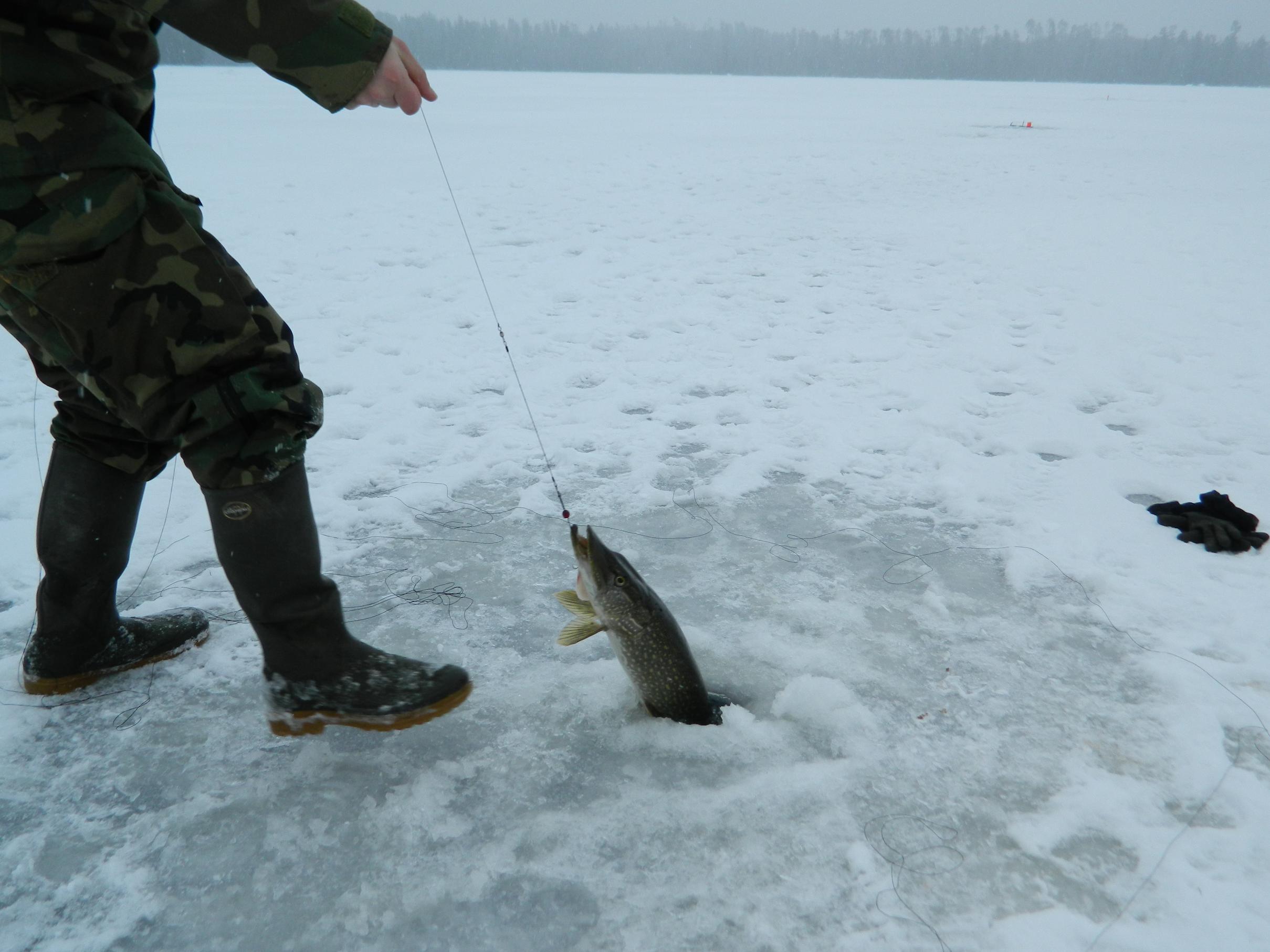 After many flags and taught lines we packed up and made more tracks toward our destination. A little slower with food in our bellies and legs beginning to stiffen up from our brief pause we made our way down Ramshead Creek to Nina Moose River. As evidenced by the photos it had started to snow now and as we reached Agnes Lake it was coming down pretty good. This fresh heavy snow was definitely noticeable as we pulled our sleds behind us. Trying to combat the combination of overheating while moving and freezing while resting was just as fun as avoiding stretches of thin ice and open water--reading the snow was no easy task after gazing at bright white all day. 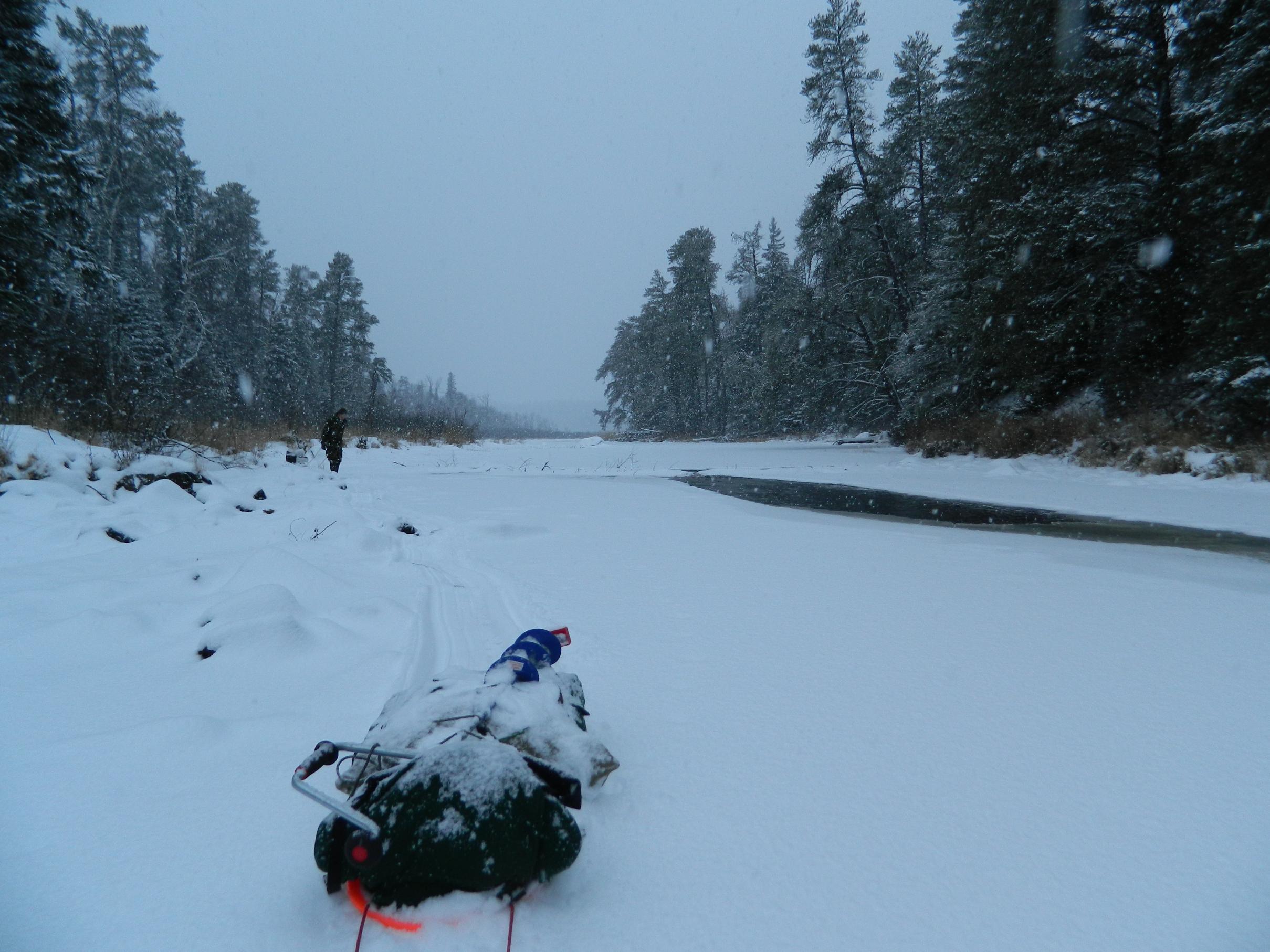 As snow came down still thicker we received a reminder of just how short the days are in winter months. As we realized the overcast grey was becoming darker and darker we made for the easiest place to make camp on Agnes--by now too tired to set up camp, cook dinner, and pop more holes in search of slow moving walleye. 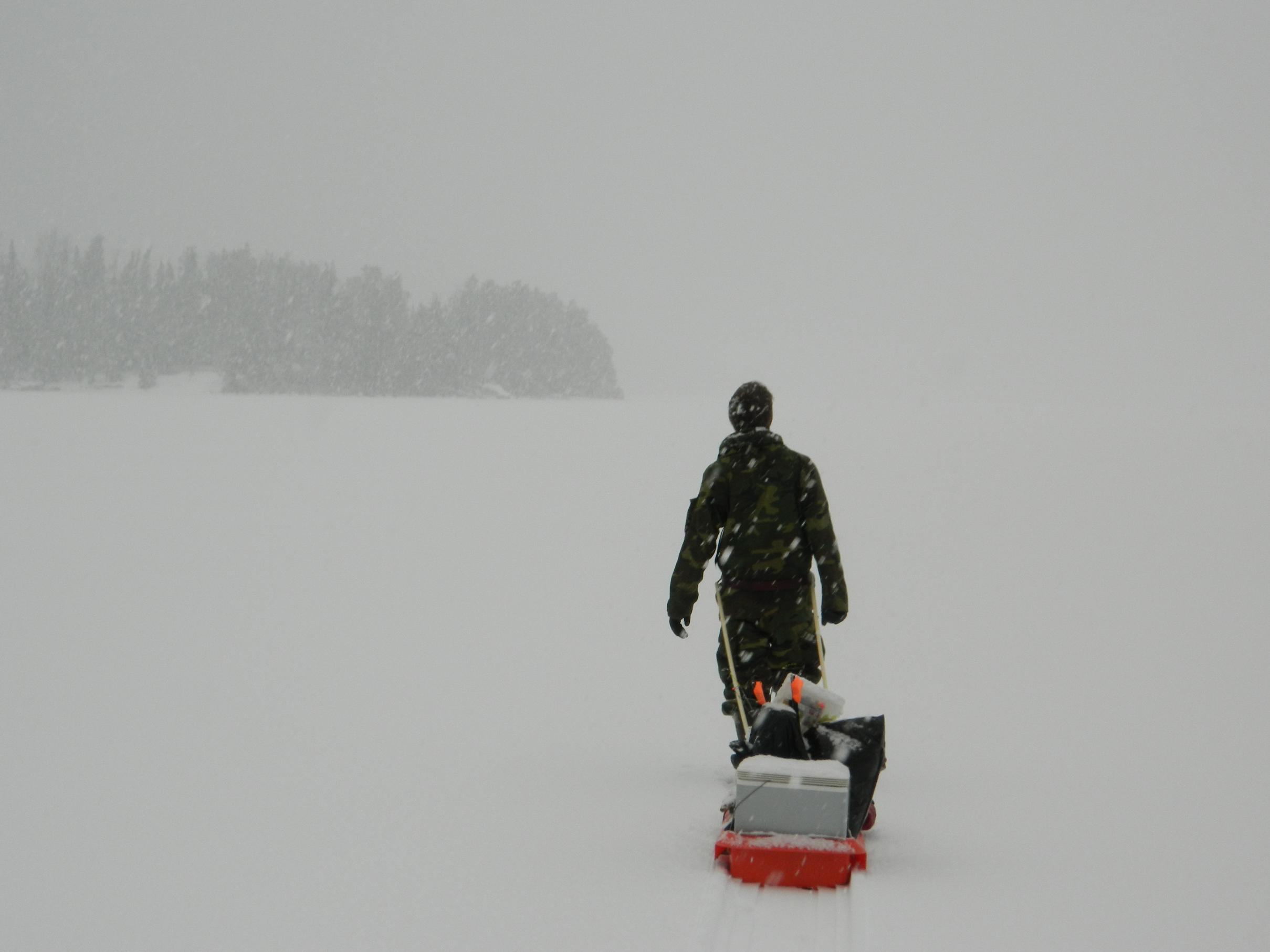 Camp made and firewood collected, we prepared dinner and decided that fishing would wait until tomorrow when we reached Oyster. 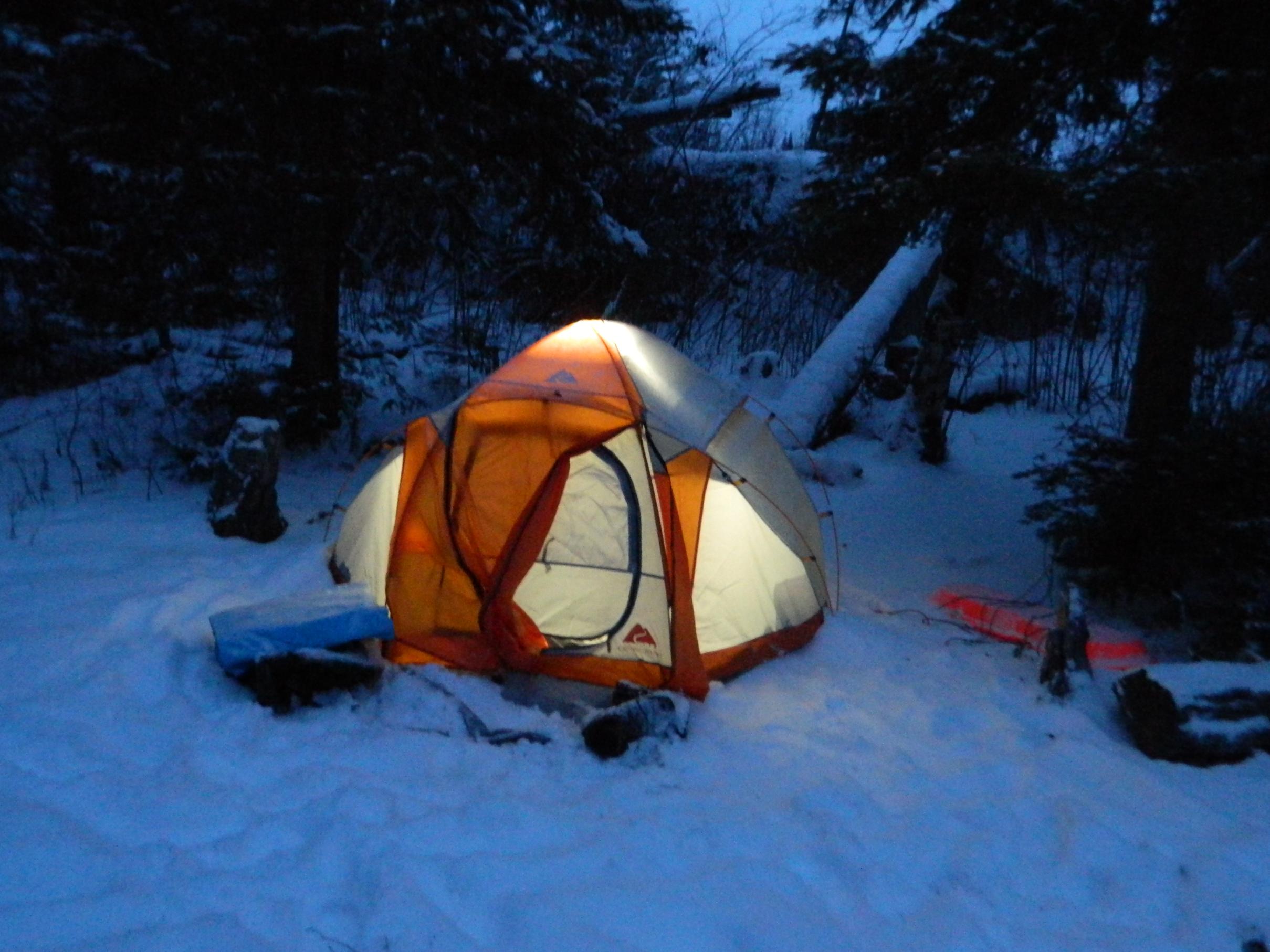 Another early start the next day as we packed up and headed across the portage between Agnes and Oyster River. Under and over downed trees we followed old wolf tracks til we broke out into the open and began trekking north and then west toward the lake. 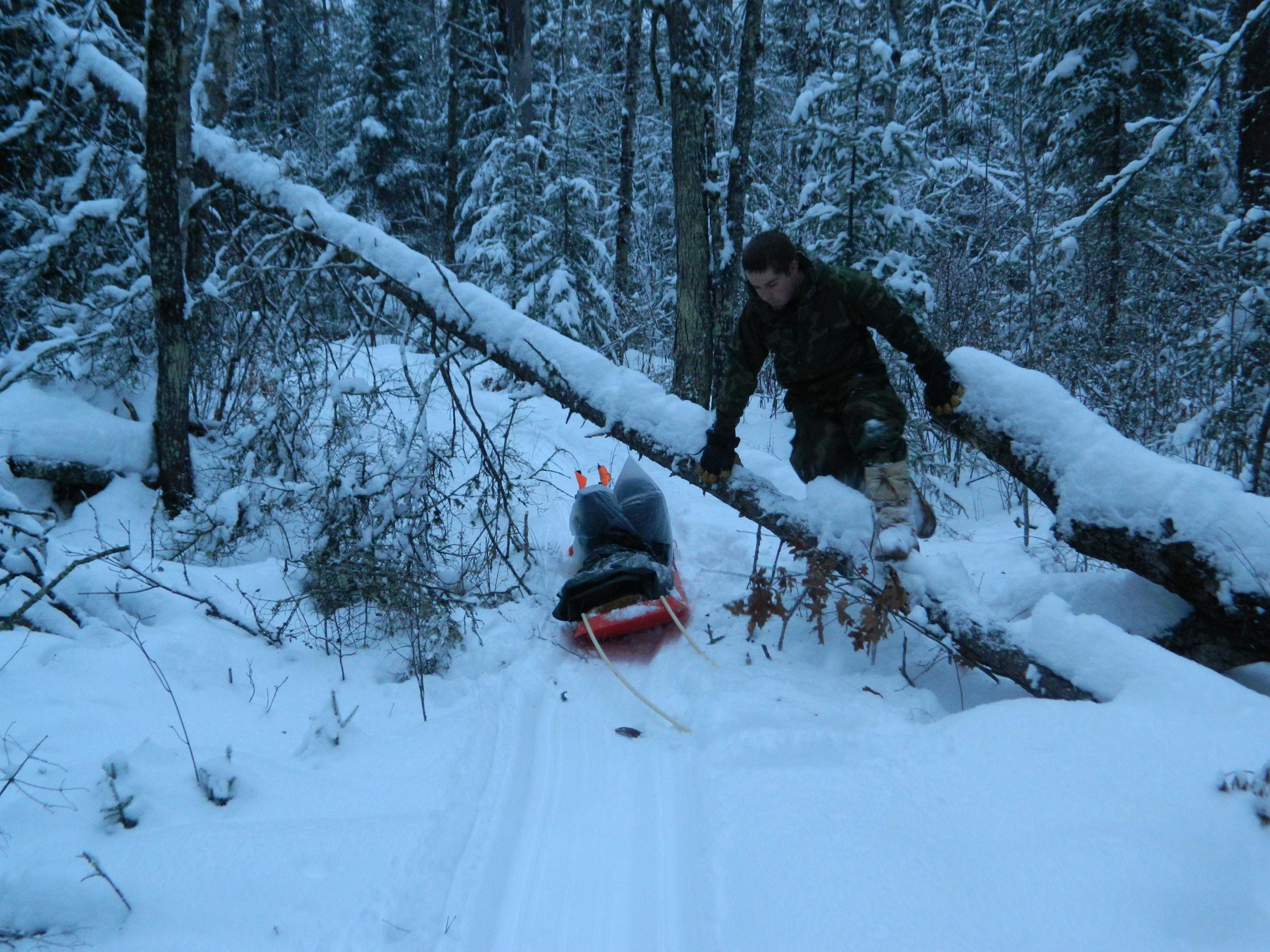 After negotiating the open water and slush at the head of the Oyster River we made it to the lake. With wind howling we watched a black wolf run full tilt into the woods as he caught sight of our entrance onto the monotone scene. Consulting depth maps I began popping hole after hole as my friend gathered firewood and cooked up some venison steaks for lunch. 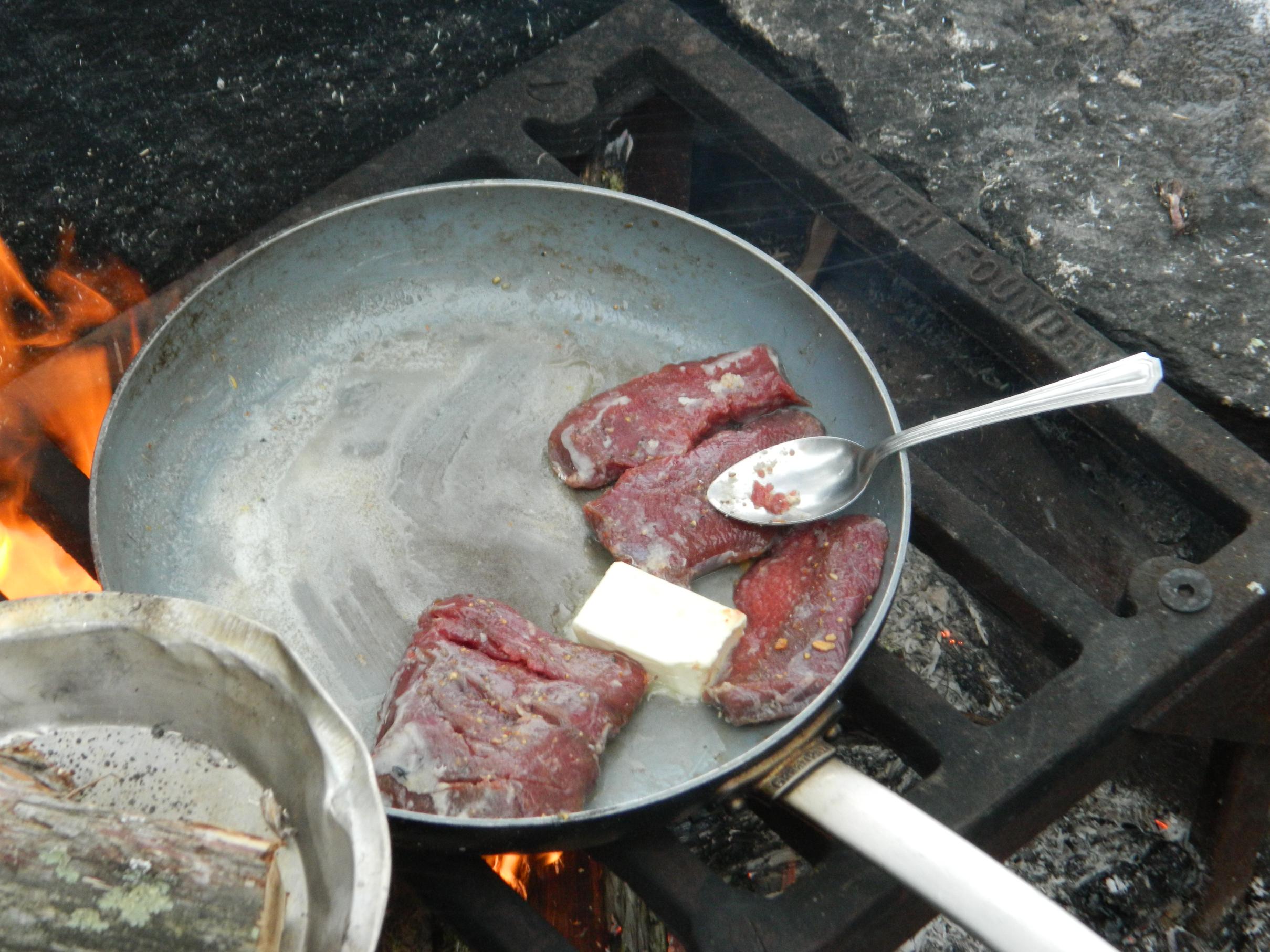 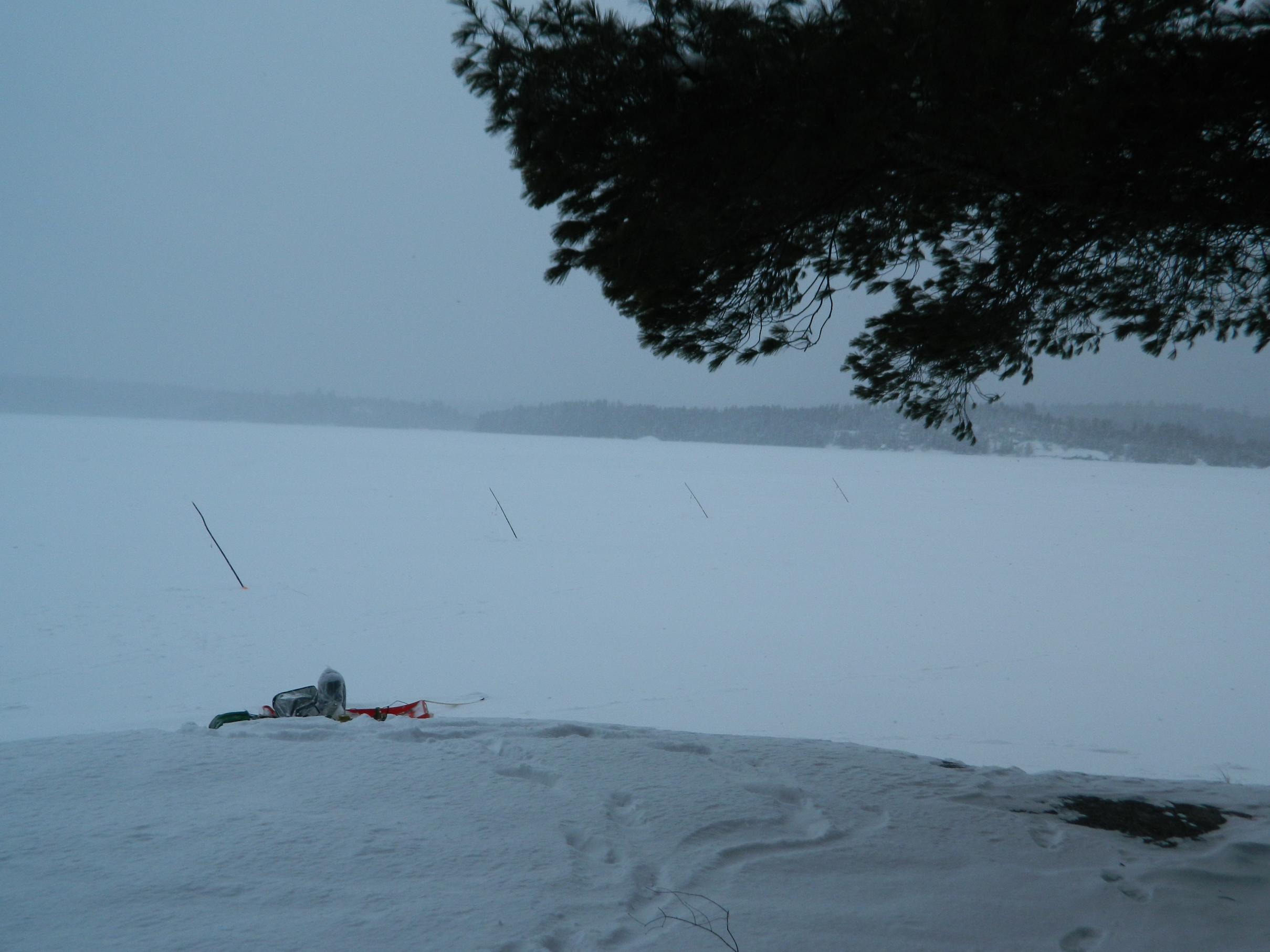 All that work done and the wind was too much for our tip ups. So we rigged up some flags that went down instead of up. That helped out but also reminded us that we weren't catching anything. The snow filled our holes faster than we could make the rounds to clear them. We moved several times. Eventually we located a mid-lake hump that was promising. But we had had enough of the freezing wind and blowing snow. We retreated into the pines to make camp and reassess the situation. More venison was consumed and we decided to hit it hard early in the morning before we make the trip back out. 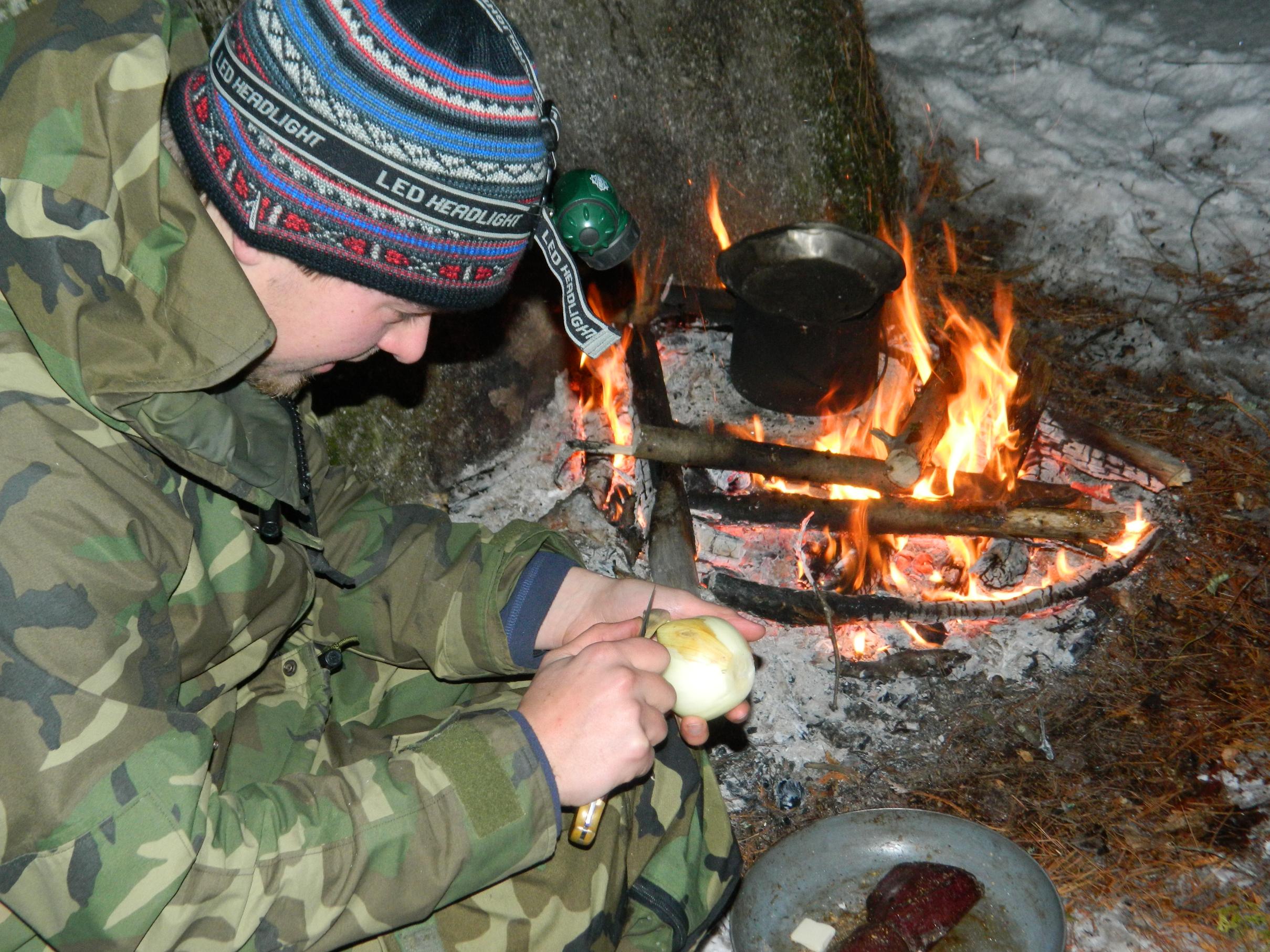 Early morning proved to be a good time to set up over that mid-lake hump as we pulled in a couple of small lakers--nothing to write home about but a success in our books after all the work we put into locating and catching them. 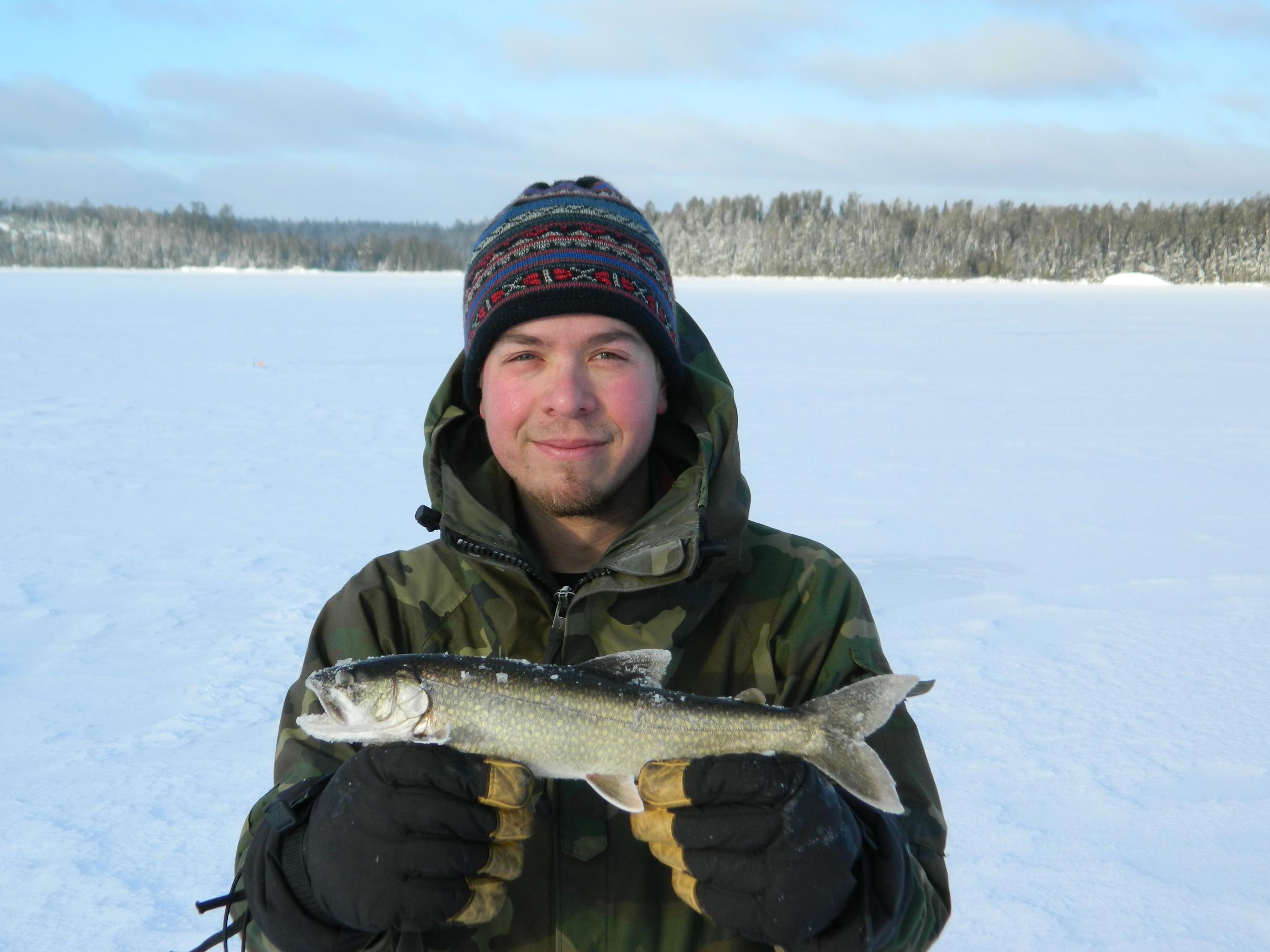 Now all that remained was the full trip out. With no more snow falling and the wind calm we set out. Stiff from sleeping in the cold for the past couple nights we weren't quite as energetic as when we began. We also didn't plan on bringing enough food for such a demanding hike. We were burning calories like crazy and ingesting summer canoe rations--not exactly enough for the type of work we were doing.

As we made our way out we encountered open water where our trail once was and a freshly killed deer right on our sled tracks--with the wind blowing like hell the night before we weren't quite sure we heard wolves but now we were sure it wasn't just our imagination. 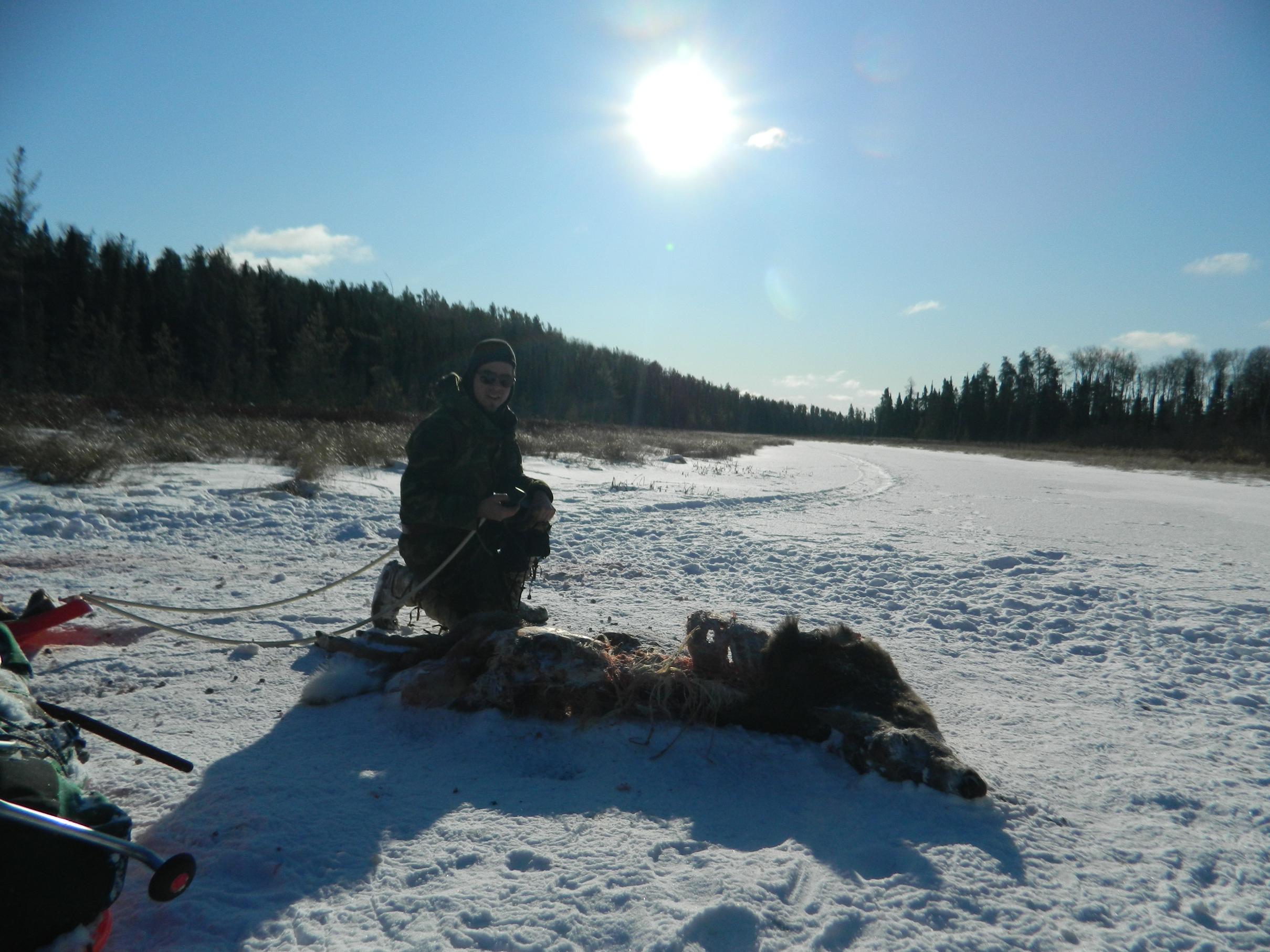 As we hit our old tracks on Nina Moose River we stopped to enjoy the last of our fun size twix bars. On Ramshead--nearly 3/4 of a mile ahead of my friend I stopped to make the last of our rations. A package of Ramen soup with a full stick of butter for seasoning gave us a final boost to push through the drifts and back up Meander Creek. There waiting for us just after dark was a warm pick up and cold beers. 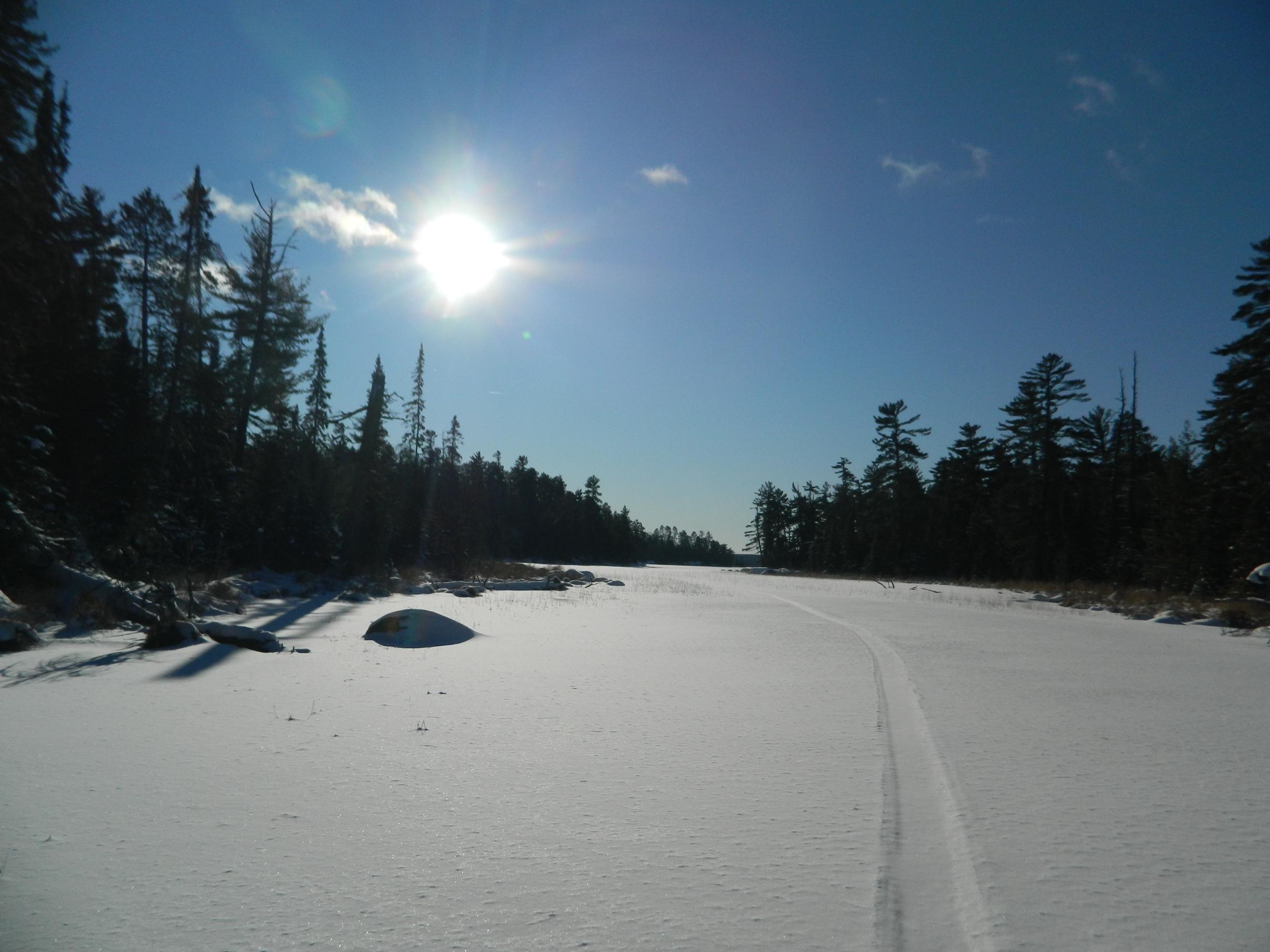 I've since talked this same friend into accompanying me on more misadventures but nothing quite as strenuous. Perhaps this winter it's time to take another path less traveled...