Quetico Beaverhouse to Cirrus and Quetico L.
by HighnDry

Trip Type: Paddling Canoe
Entry Date: 07/27/2013
Entry Point: Quetico
Exit Point: Quetico
Number of Days: 4
Group Size: 4
Trip Introduction:
This was an introduction for my family as a whole to Quetico. I had been graciously allowed by another group to “tag along solo” with them (which means they patiently let me slow them down!) in May for my first trip to Quetico (Nym-Batch-Jesse-Sturgeon-Twin-Pick Narrow-Batch-Nym). This trip would be a base camping with some sightseeing, a bit of fishing, and a more laid-back adventure.
Discuss Trip: View Discussion Thread (8 messages)
Report
Day 1 of 4 Ugh! Rain. Wind. Cold. A trifecta of weather greeted us as we woke up in the Atikokan Hotel --- this is a great place to stay by the way. We packed up our gear and headed down en masse to the dining area as we watched the slanting rain and listened to it pelt the windows. Breakfast was enormous. Word of advice: It’s worth not rushing over this as the food here is excellent. A local couple was in the dining area and proclaimed this little restaurant the “best in town”.

Finally around 11AM we pushed off from the QP ranger station in Atikokan after my son (10 yrs) and my daughter (8 yrs) passed their orientation quiz with the ranger. Driving in to Beaverhouse via the turnoff dirt road was fairly straightforward. Soon we found ourselves on the narrow one-way logging road to the parking area and with a bit of coaxing, had everyone packed into the canoe and shoved off around 2:30PM --- when the rain came again….with wind.

Portage BH into Cirrus: finding that first portage into Unnamed Lake is relatively easy and quick. We were there in less than 10 minutes or so even with the wind. We hung up though on a submerged rotted pylon from the old bridge which was bit of bummer. Unloading, we trudged the what was marked as a 115 rod portage for 160 rods – oh well --- the maps can’t always be dead on! Arrived Unnamed fairly wet now and needing to coax everyone back in the boat and shove off just to stay warm. My son found the portage trail which is tucked back to the left only about a 5 minutes of paddling. It was almost a left-hand u-turn at a downed tree hanging in the water which we had paddled passed (HINT: if you reach the little island on your right, you’ve gone too far) in the rain & wind. Unloading quickly, we trudged the short path to Cirrus and shoved off into the little inlet, paddling somewhat sheltered from the weather until we found a fantastic campsite at #32. Here’s the proof: 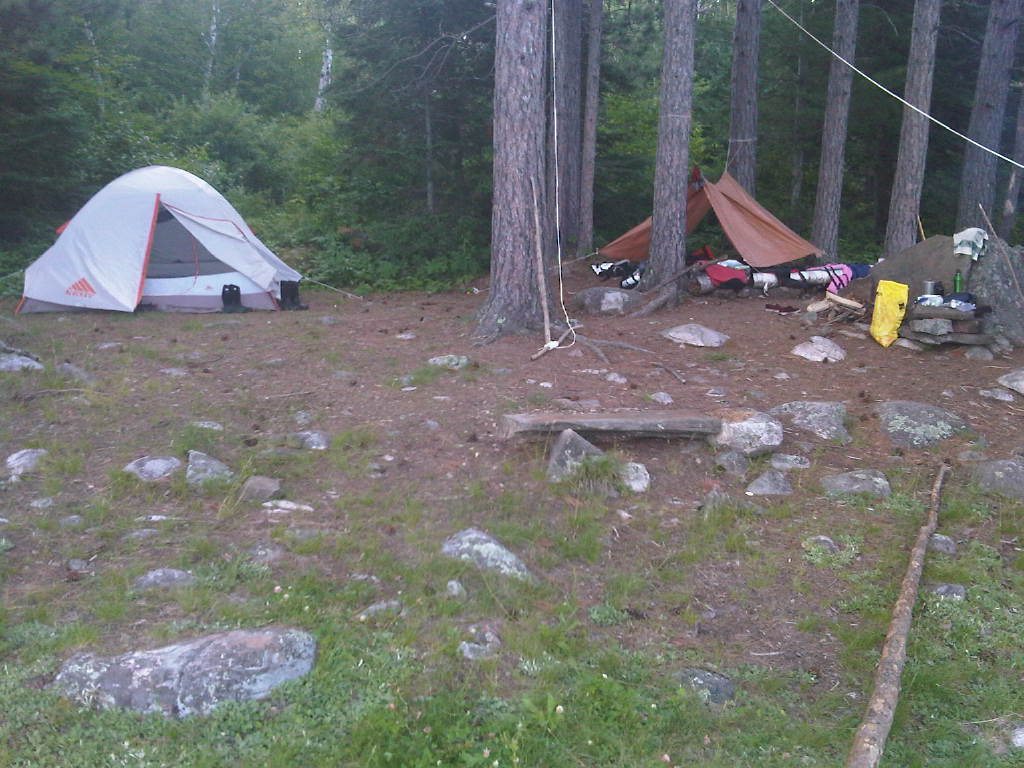 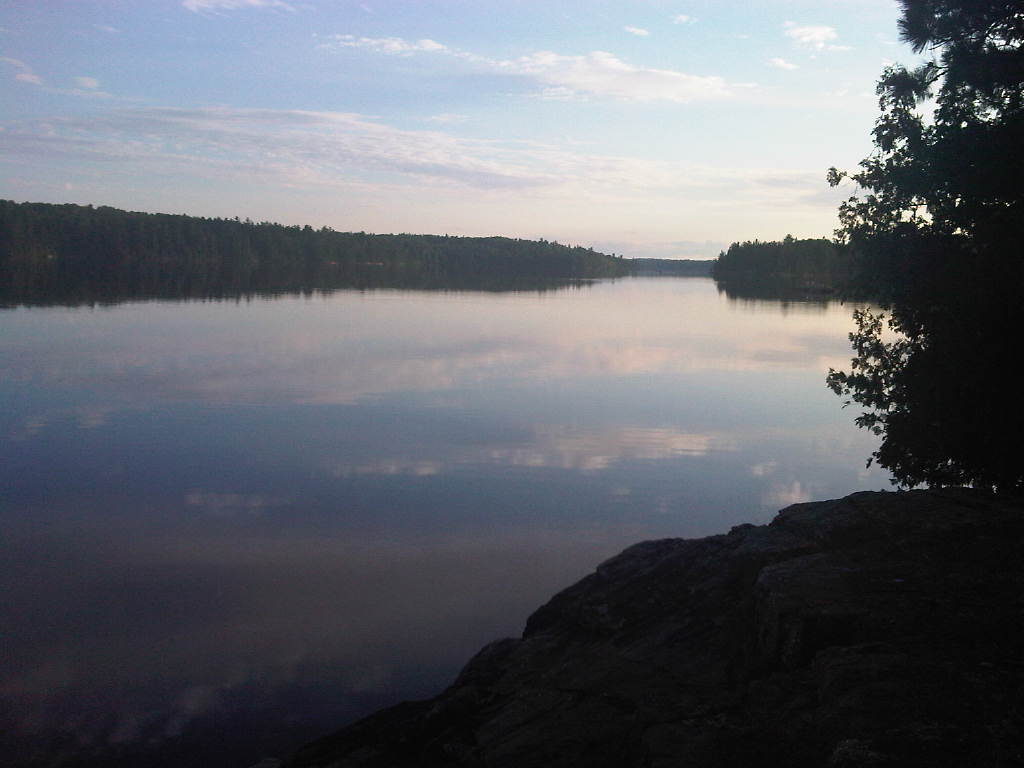 Day 2 of 4 So here is where things started to get better ?. It stopped raining during the night and began clearing on Sunday morning. Winds were fresh but actually calmed a bit as the sun rose. Taking our time over breakfast, exploring and camp chores, our little intrepid group of my wife, myself and our two little ones headed out with fishing rod and picnic lunches for campsite #3J at the southern end of the channel out of the upper part of the lake. My plan was to troll a deep tail dancer and experiment with an inline 1 ½ oz sinker rig --- which I had never done before. Everyone else’s plan was to “indulge Dad and his little obsession”, not fall out of the boat, get some exercise and fight back the boredom (kids’ perspective).

We found the campsite in excellent condition after reading some reports of a toilet-paper strewn environment. Lunch was cheese/crackers/salami, pb&js, trail mix, and lots of water. No luck fishing either the cover or from the point, but mid-afternoon in bright sunlight is probably a fairly lousy time to fish. Made up for it after the paddle home off of the campsite by pulling in an 18in walleye with a jig/leech setup to throw in right in front of the campsite. There is nothing like the taste of fresh fish?

Here are a few pics of the campsite 3J and the meal: 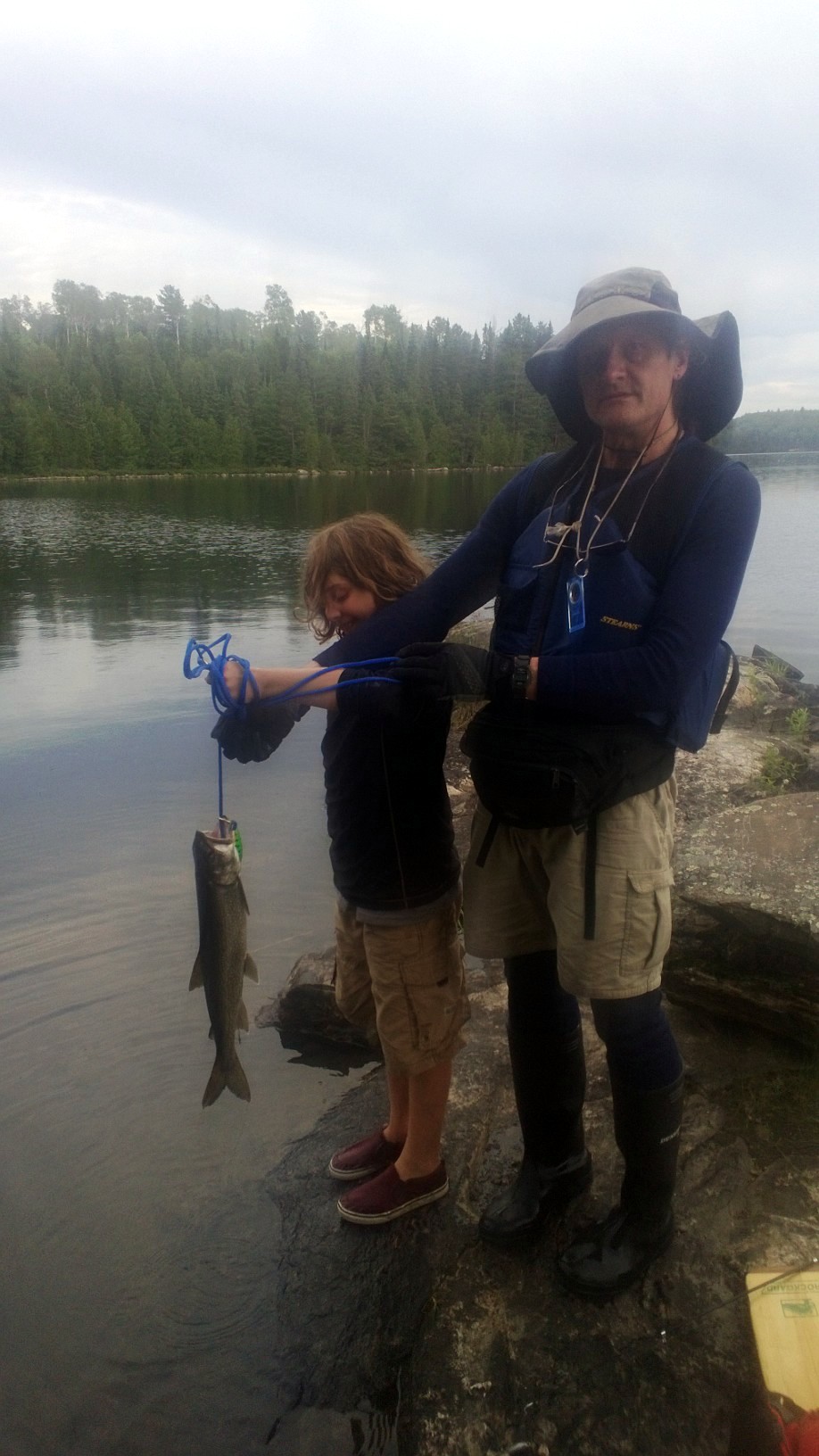 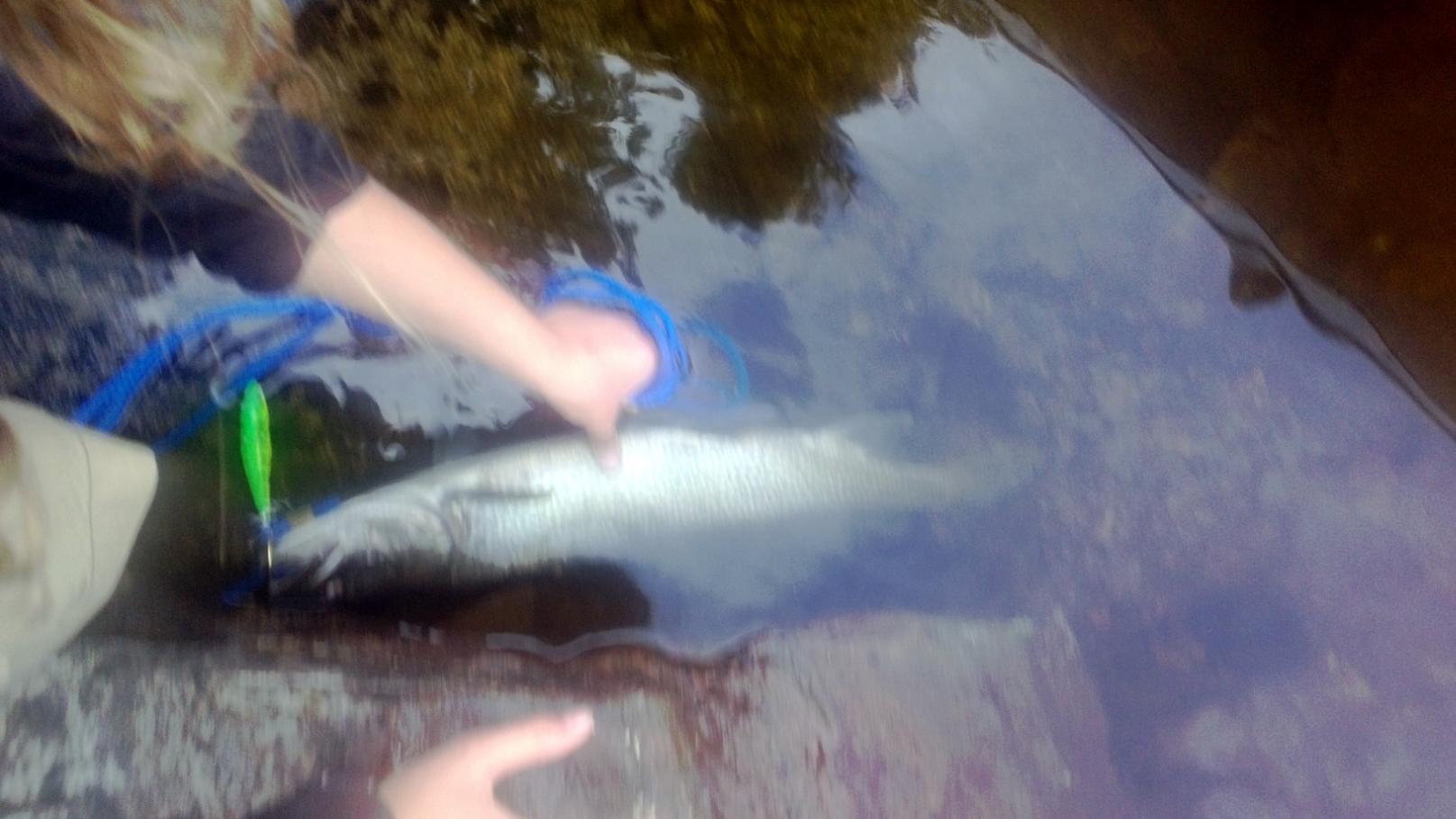 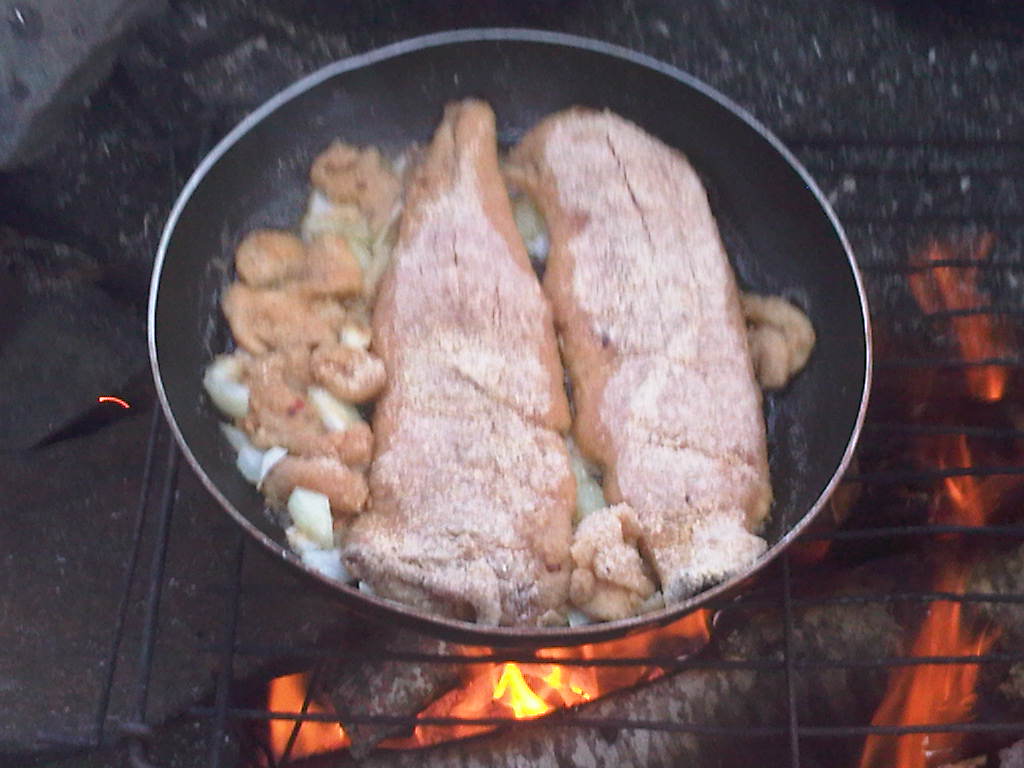 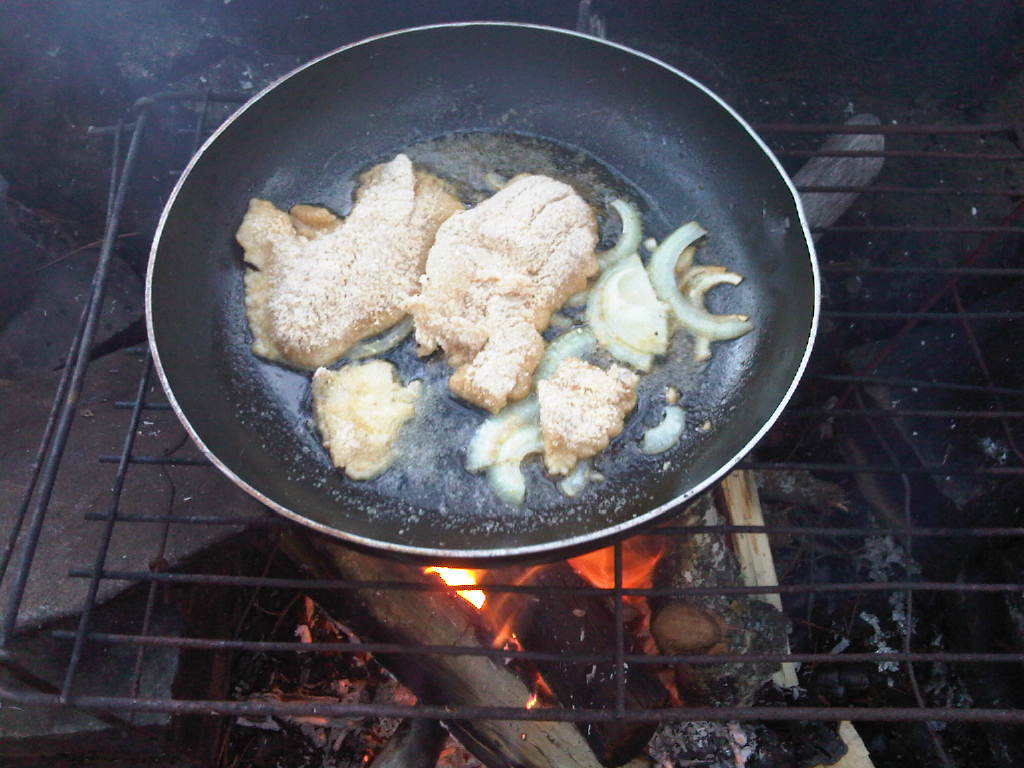 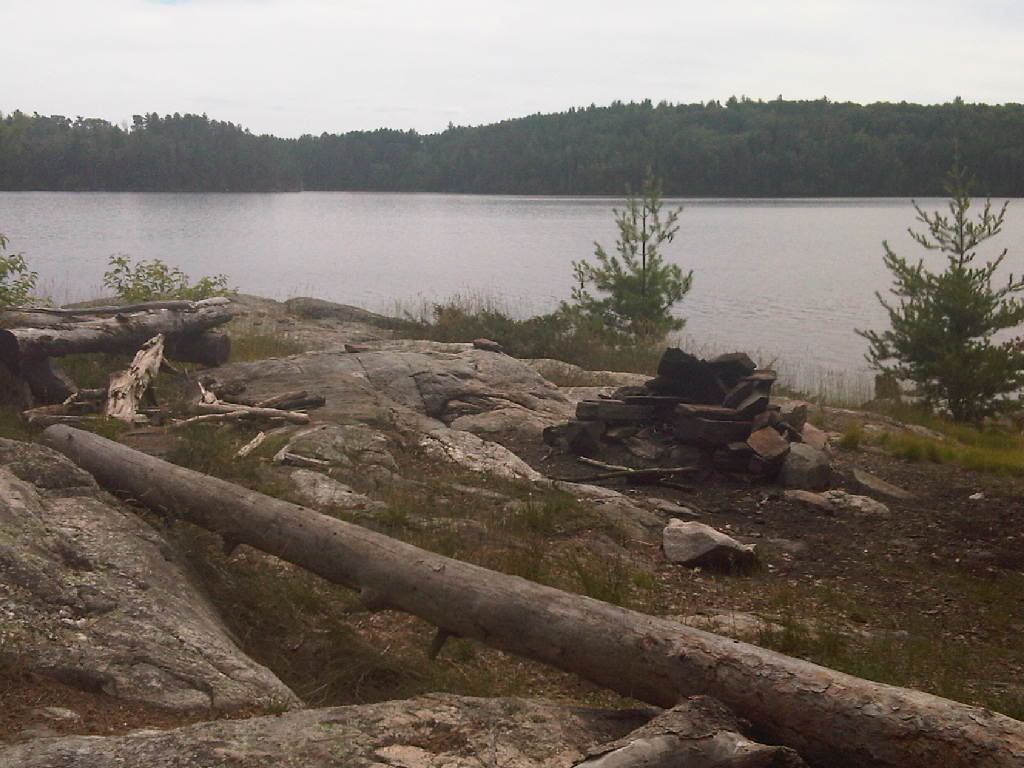 Day 3 of 4 Woke early this AM to find the rain stopped and pulled out a with a Lucky Heddon 13. Hit pay dirt with a few casts and another 18-20 in walleye which we released. With optimism and moods greatly improving amongst our little rag-tag band of intrepid travelers, camp breakfast was somewhat less leisurely. Fresh blueberries were gathered from the hillside, pots of coffee to go with the pancakes, eggs & bacon and oatmeal seemed to hold over our kids for the moment so we decided to head-out about mid-morning into the brilliant sunshine and windless day. Our destination were the pictographs on Quetico. The portage from Cirrus into Quetico that seemed easiest to reach was directly across the lake from campsite #3J that we had visited the day before.

This is a beautiful rock channel bounded by about 50 foot cliffs on the east side and steep sloping conifer forest on the west. The water was high which meant using the first of two paths to the left of the channel. The initial 20 or so rods pass under part of the flat rock face and wind through the forest to end at a small cascade to the right and a small pond. The rest of the trail to the left was blocked by at least three 12 inch or better diameter trees and a lot of low-hanging branches. Scouting out the trail, we put in and paddled to the right of the pond just before the rapids that empty the pond. We lined our canoe down this short 10 rod cascade and off we went into Quetico. 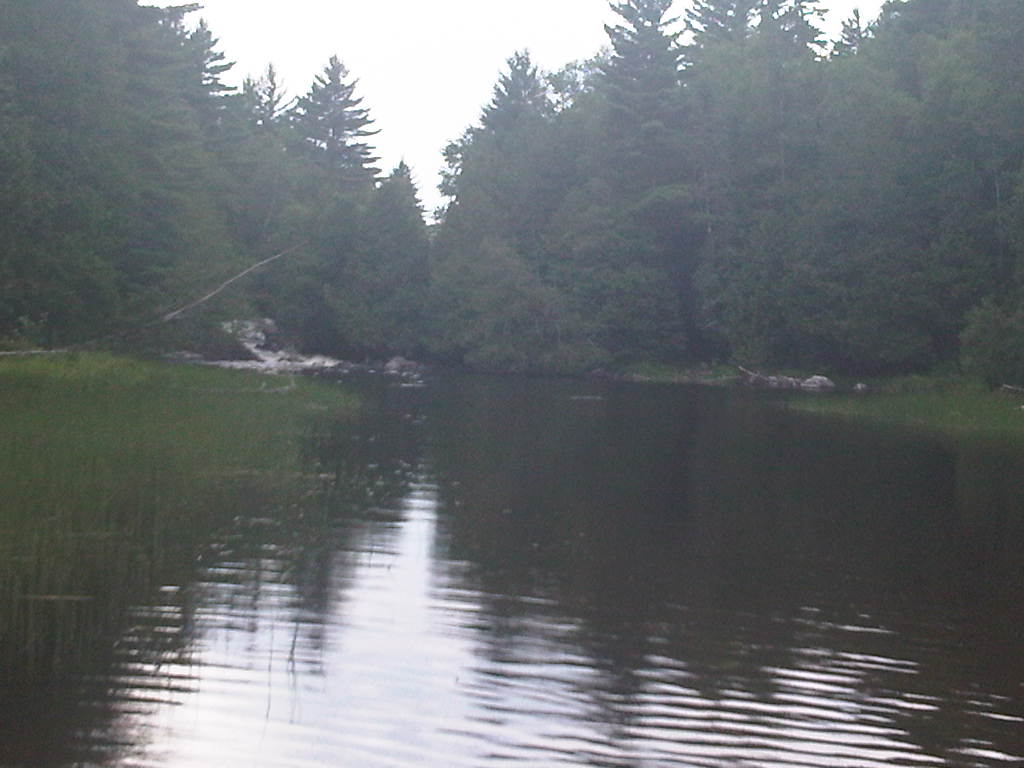 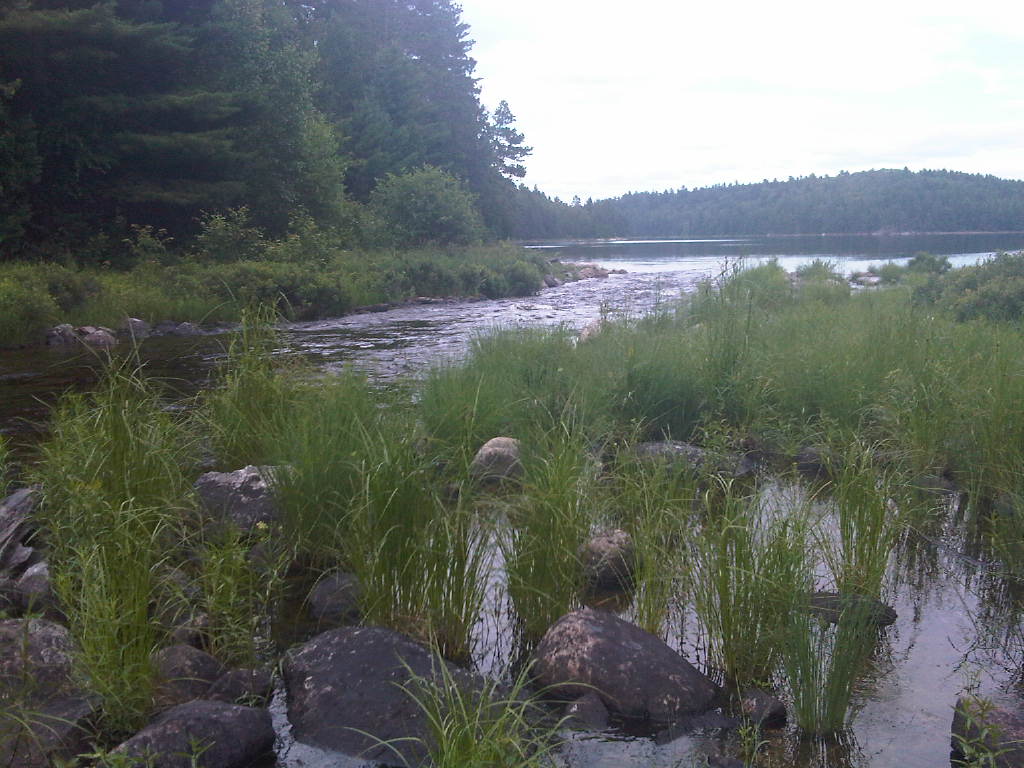 We didn’t photograph the three pictographs that we saw probably because we couldn’t get our phone/cameras out of their hiding places in our dry bags and because the Anishinaabeg ask you not to. No matter as they were impressive to find & see.

On the way home, I kept us to the southern shore of Cirrus and crossed in front of 2Z to our campsite, hooking a nice LT of about 21 or so inches for our dinner that evening. My son greatly enjoyed the filleting part while my daughter stayed at our campsite, mourning the loss of this wonderful fish – the dichotomy of emotion was very much in the spirit of the place. 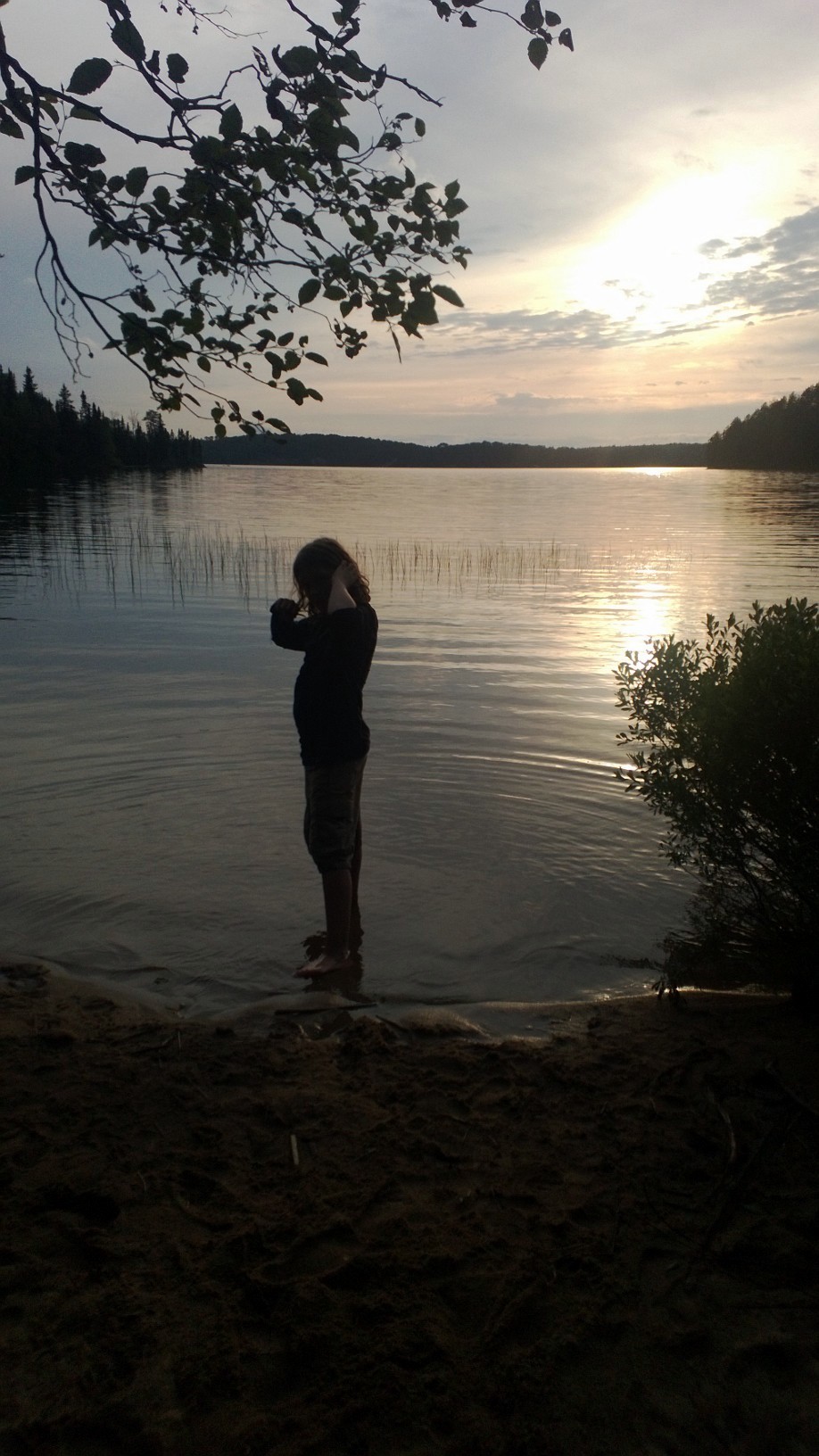 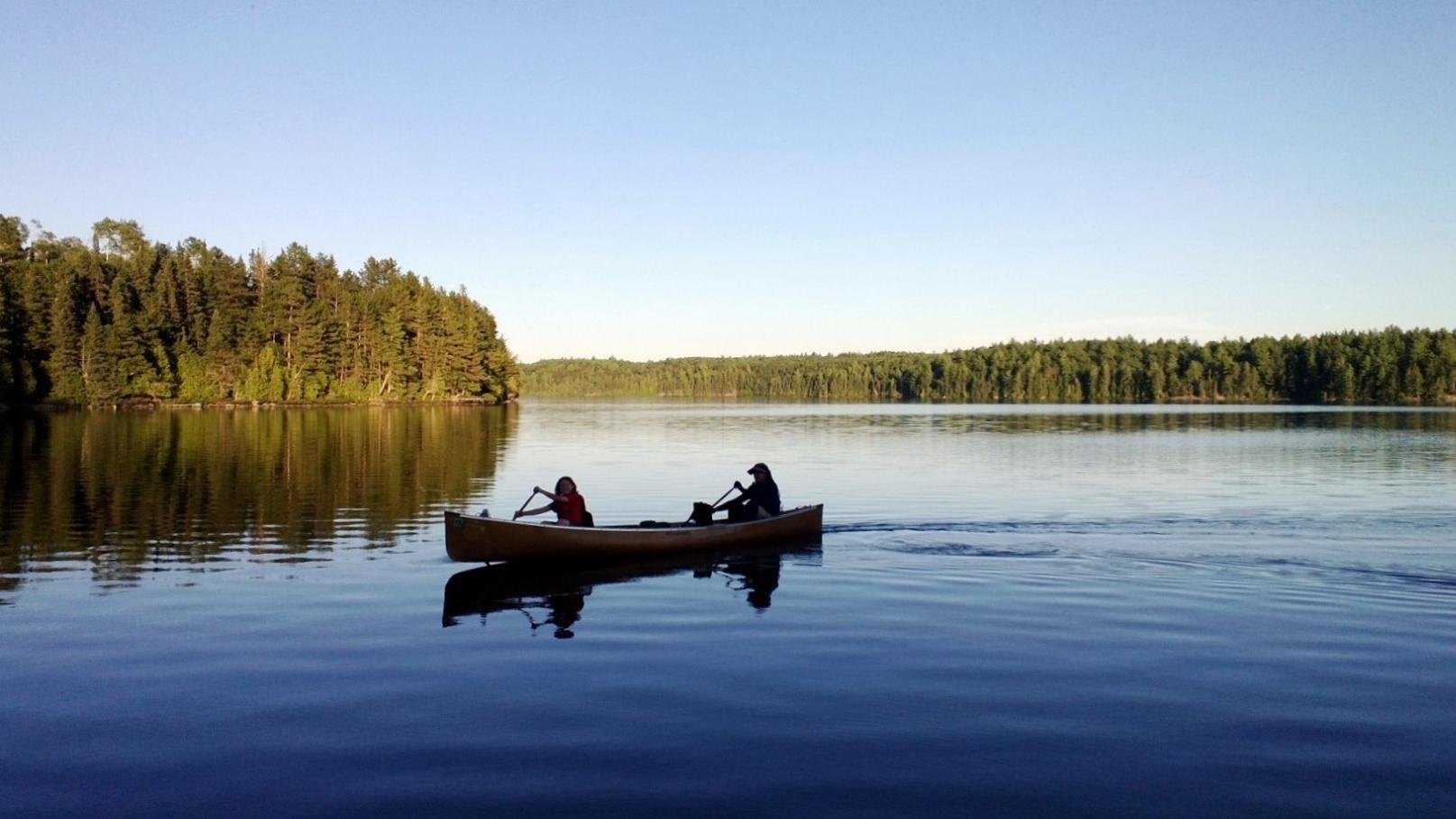 Day 4 of 4 Rain and a bit of wind moving back in. Kids were very excited to pack up although they were sad to be leaving “their campsite” and were practically begging my wife and I for reassurances that we would return next year here to “our spot”. We acquiesced. So, one last shot at fishing (never say die), I trolled another deep tail dancer, a neon-tiger striped thing as we pulled into the middle of the lake passing campsite 2Z on the left. Rod tip dipping precipitously towards the water surface meant “LT” or another humongous snag on the bottom. I had a devil-of-a-time reeling in with my 6’6” rod (next time I’m bringing the Shakespeare Ugly Stick 7 footer). My wife paddled us to the southern shore as I clambered out, still thinking it was a snag --- the fish had bottomed just a couple of yards offshore and I couldn’t bring it up --- I opened the bail to release the snag and then starting to reel in again and the 26 in lake trout reluctantly surfaced.

We paddled out of Cirrus to the first portage where we found a rock ledge on a peninsula guarding the put-in cove. Eating ripening blueberries on the point, we got down to work.

The rest of the paddle home was uneventful although the last portage created a mini-mutiny amongst the 4.5 foot-and-smaller crowd. Reaching the take-out we found, unhappily, that we had left a light on inside my car and now had a dead battery! Fortunately for us, some wonderful folks from Sudbury who had driven 16 hours arrived and double-jumper-cabled us (I’ll explain in another post!) and we were off to Dawson to camp, clean up and rub our aching muscles…..What a trip! I can’t wait to do it again! 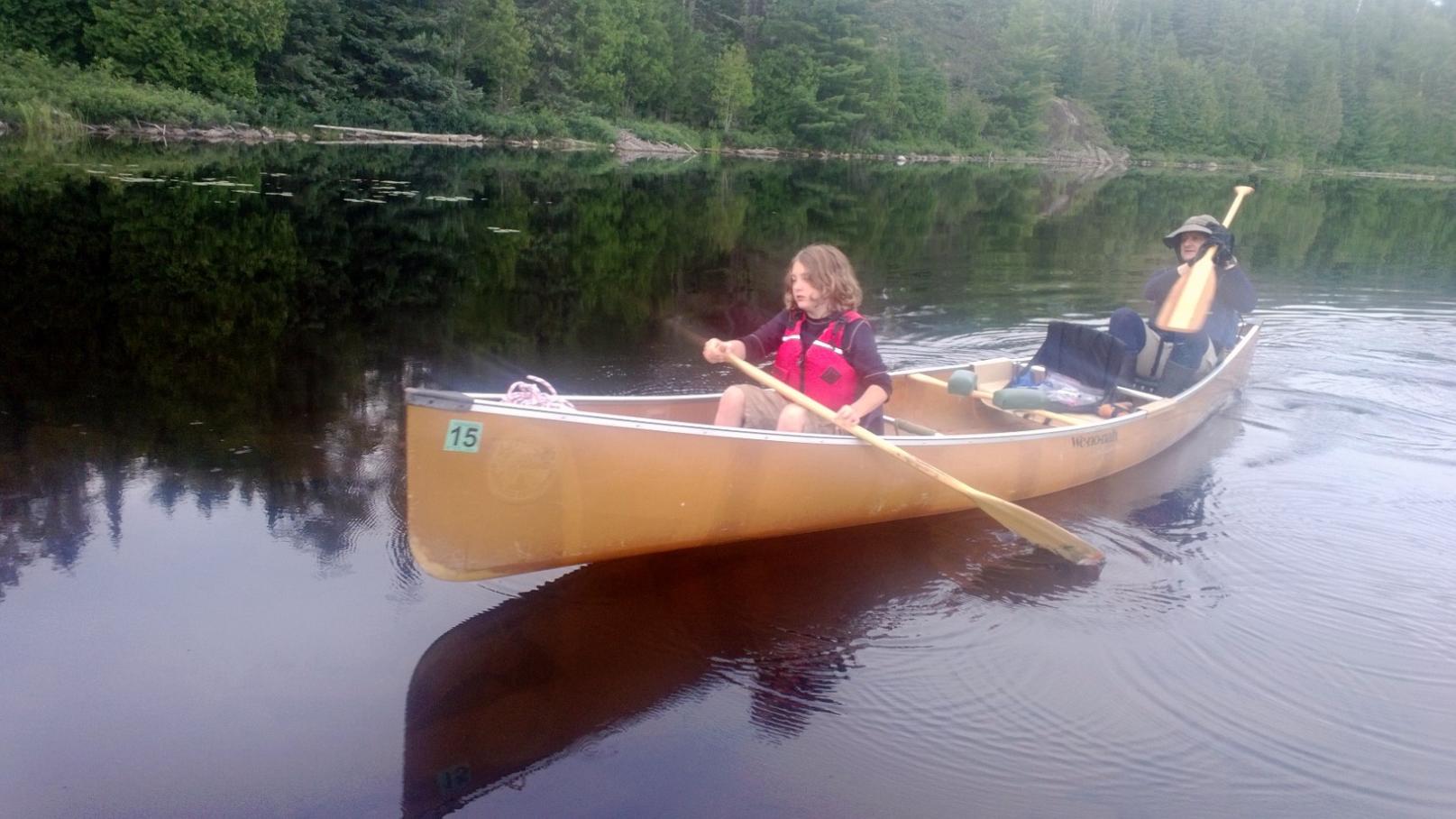 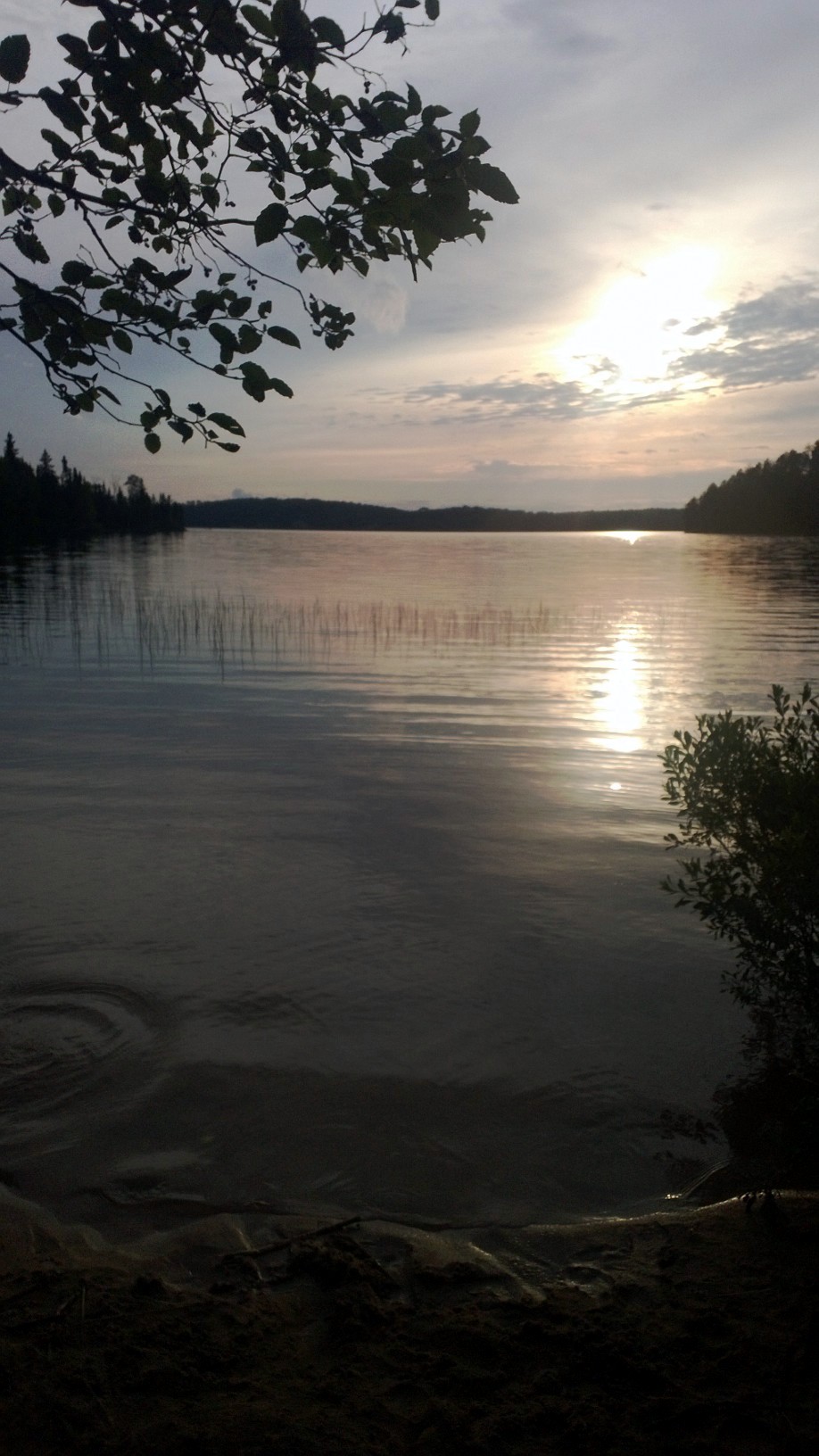 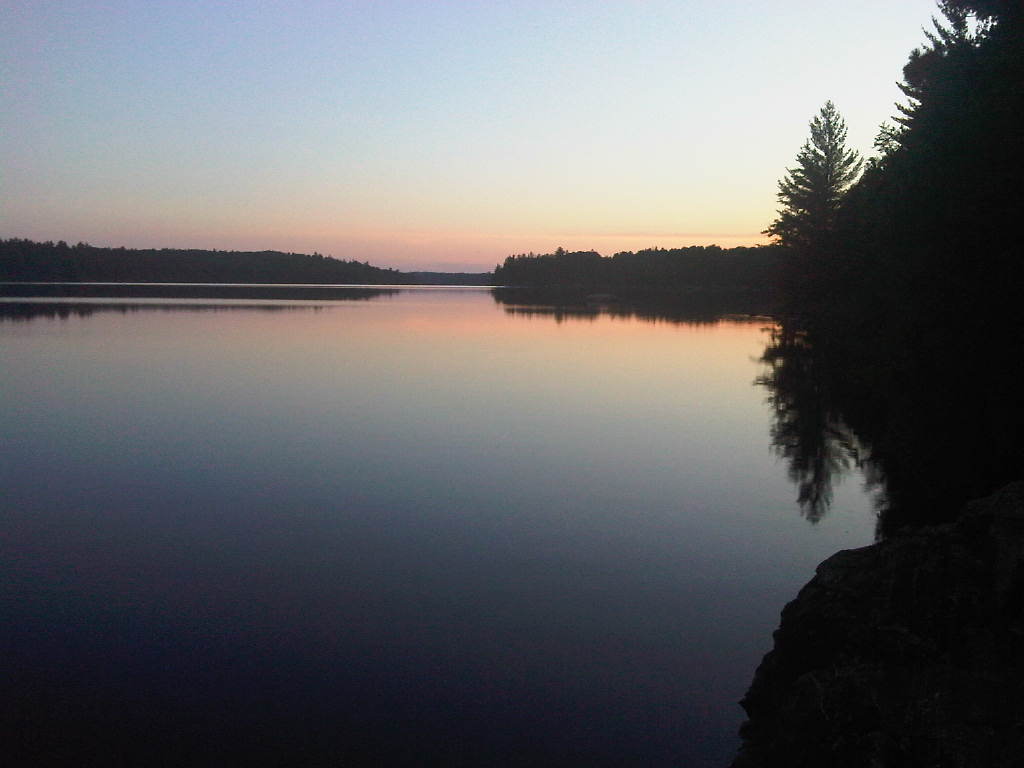 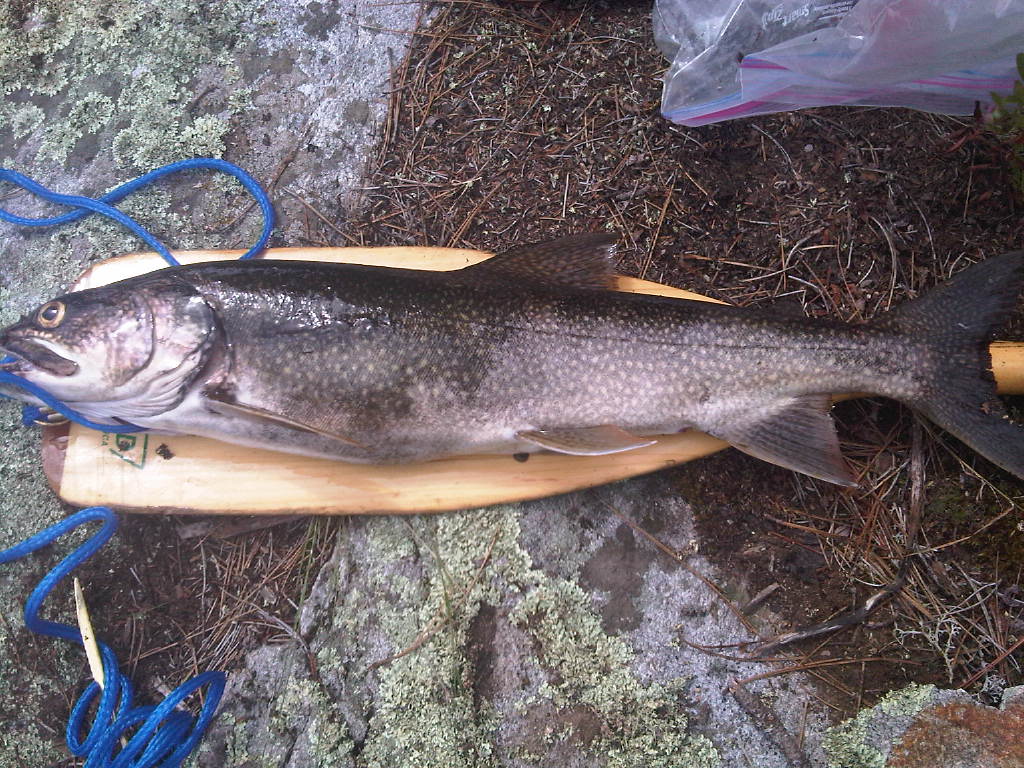