Trip Type: Paddling Canoe
Entry Date: 08/29/2013
Entry Point: Other
Exit Point: Little Vermilion Lake (Crane Lake) (EP 12)
Number of Days: 8
Group Size: 2
Trip Introduction:
I love the BWCA for solitude, relaxation and fishing. I also like physical challenges, and I like to move. This time, the trip was about the latter. Although a rod was brought along for a little fishing from camp, this trip was about covering distance. We traveled light – freeze dried – and planned for up to 12-14 days. We paddled a carbon fiber Wenonah Escape. Two packs – Boundary Waters Journal Food pack and a loaded Superior One.
Discuss Trip: View Discussion Thread (16 messages)
Part 1 of 8
Grand Portage to South Fowl: We wanted to hike the Grand Portage, but we did not want to spend an entire day doing it. So, we wound our way through to just above Partridge Falls and left our two packs. We drove back down to the Lake, portaged the canoe (and a backpack with water and snacks) through the stockade and made our way up to the river. We did it very aggressively, taking 20 minute shifts with the canoe for the first couple miles, and switched to 15 minute rotations shortly thereafter. We made it to Fort Charlotte in 2:45. We wanted to give ourselves plenty of day-light as we did not think it would be very convenient to camp on the Pigeon. As it turned out, we were glad we did not get stuck camping on the river. From Fort Charlotte we had a very mellow and easy paddle upstream to Partridge Falls. It would be a state park if it was on the shore – fantastic falls. We loaded our gear after traversing the very well-marked portage and continued upstream. Again, we had nice, easy paddling watching all sorts of waterfowl and beaver sign. However, about the area we hoped to find the mythical “English Portage” we faced a significant thunderstorm.  That happened to be about the time where the water got a little thin and we ended up dragging our canoe upstream for a while.  We ditched into some alders while the lightening passed and continued on our toil. We never found a portage, despite following dead-end beaver trails repeatedly, and ended up pulling out through several miles without hitting navigable water. Eventually, we hit the deep, slow moving water again. We meandered through swampy wetlands and rice before finally hearing rapids again. Shortly thereafter we found the most poorly maintained portage trail on our 200+ miles – the South Fowl Portage. It was on the Canadian side, and was narrow, steep and rocky with about 12 deadfalls along its 320 rods. Very difficult, had to come back for the canoe after abandoning a single attempt. Just when my hips were telling me I could not continue much more, the sheer rock face of the southeastern South Fowl shoreline told me we made it. We paddled the mile to the first camp site available and made it into our tent just in time to avoid the second thunderstorm of the day. We had the lake to ourselves. Decent campsite, high and dry, and plenty of room. 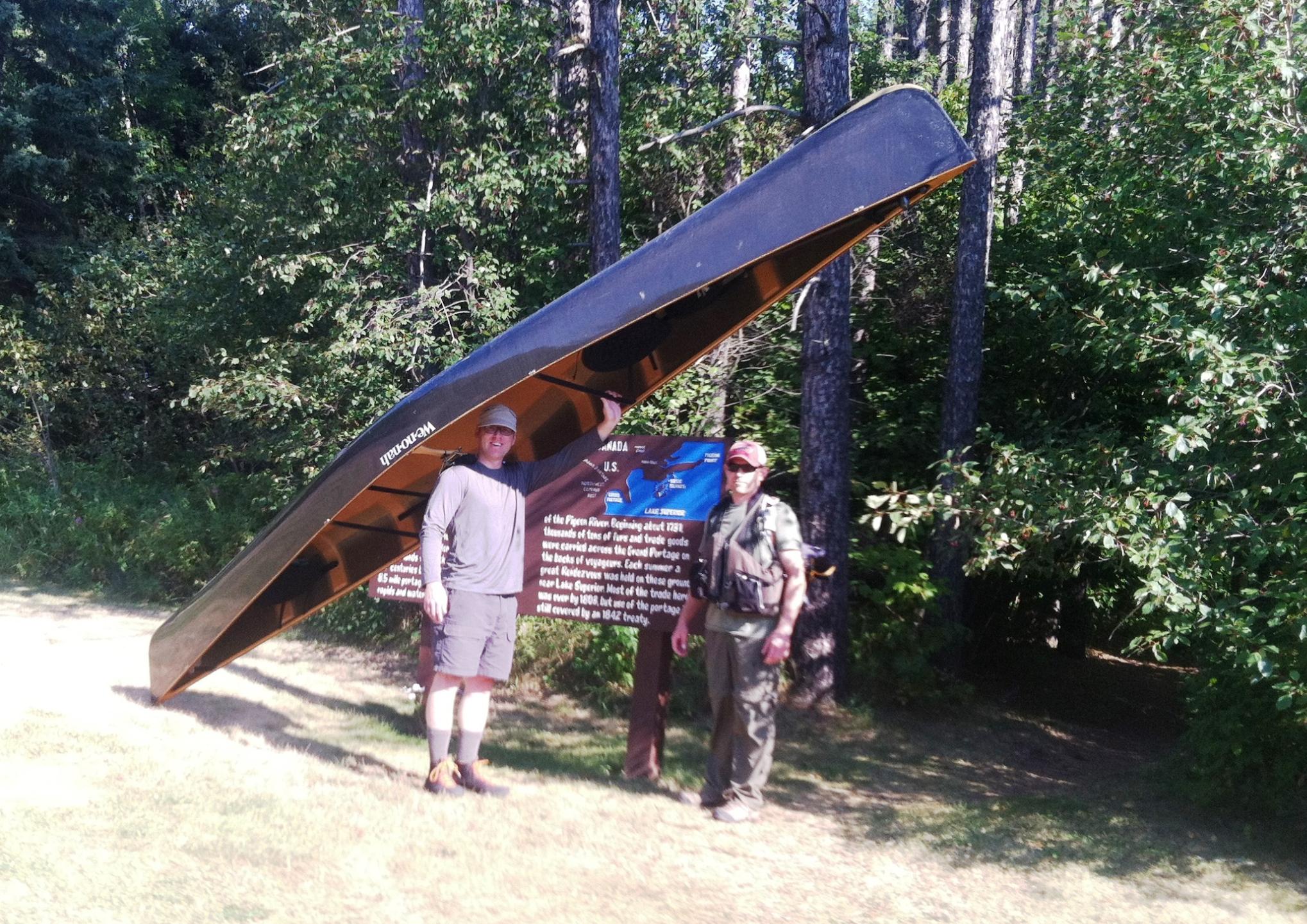 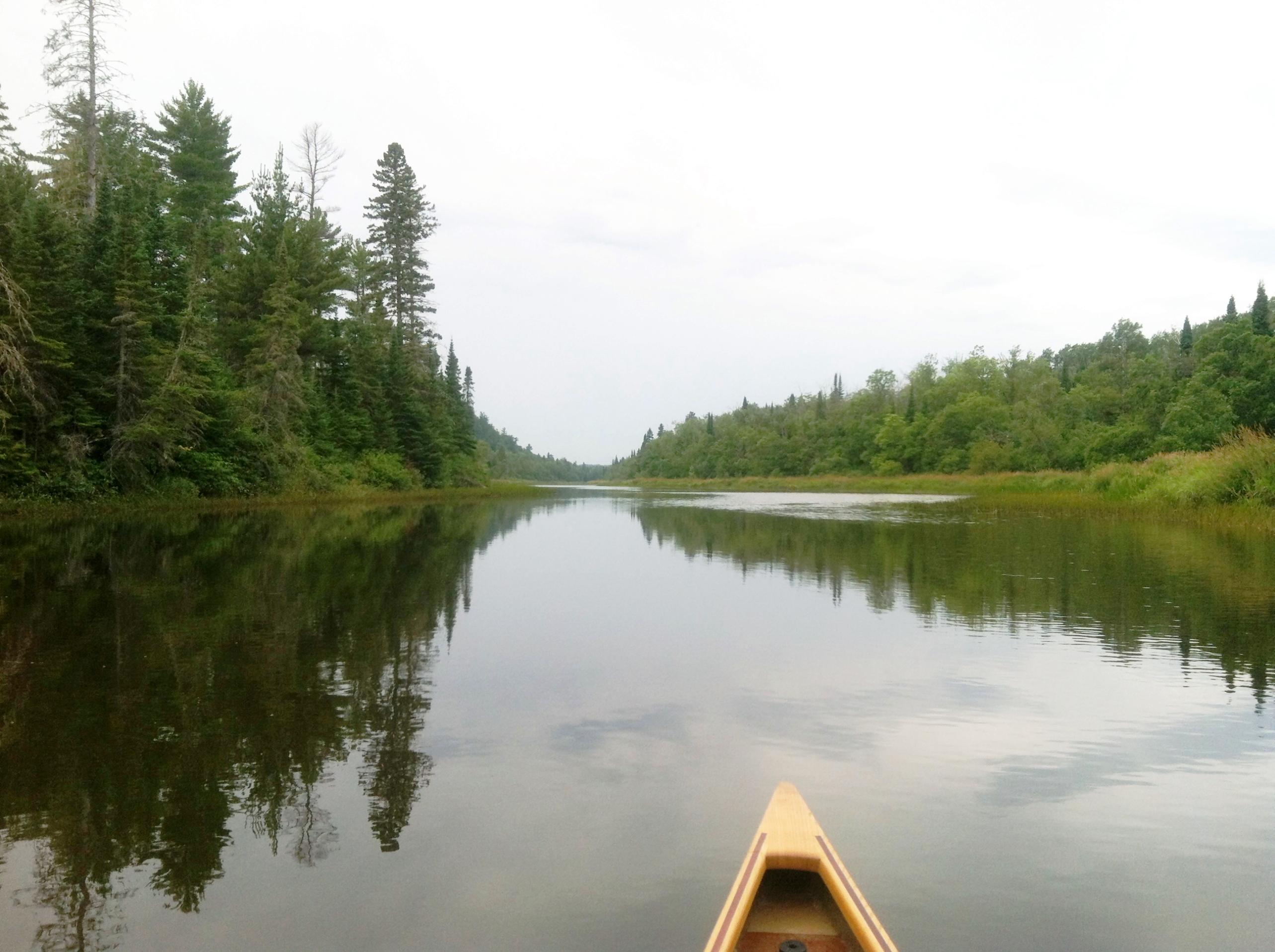 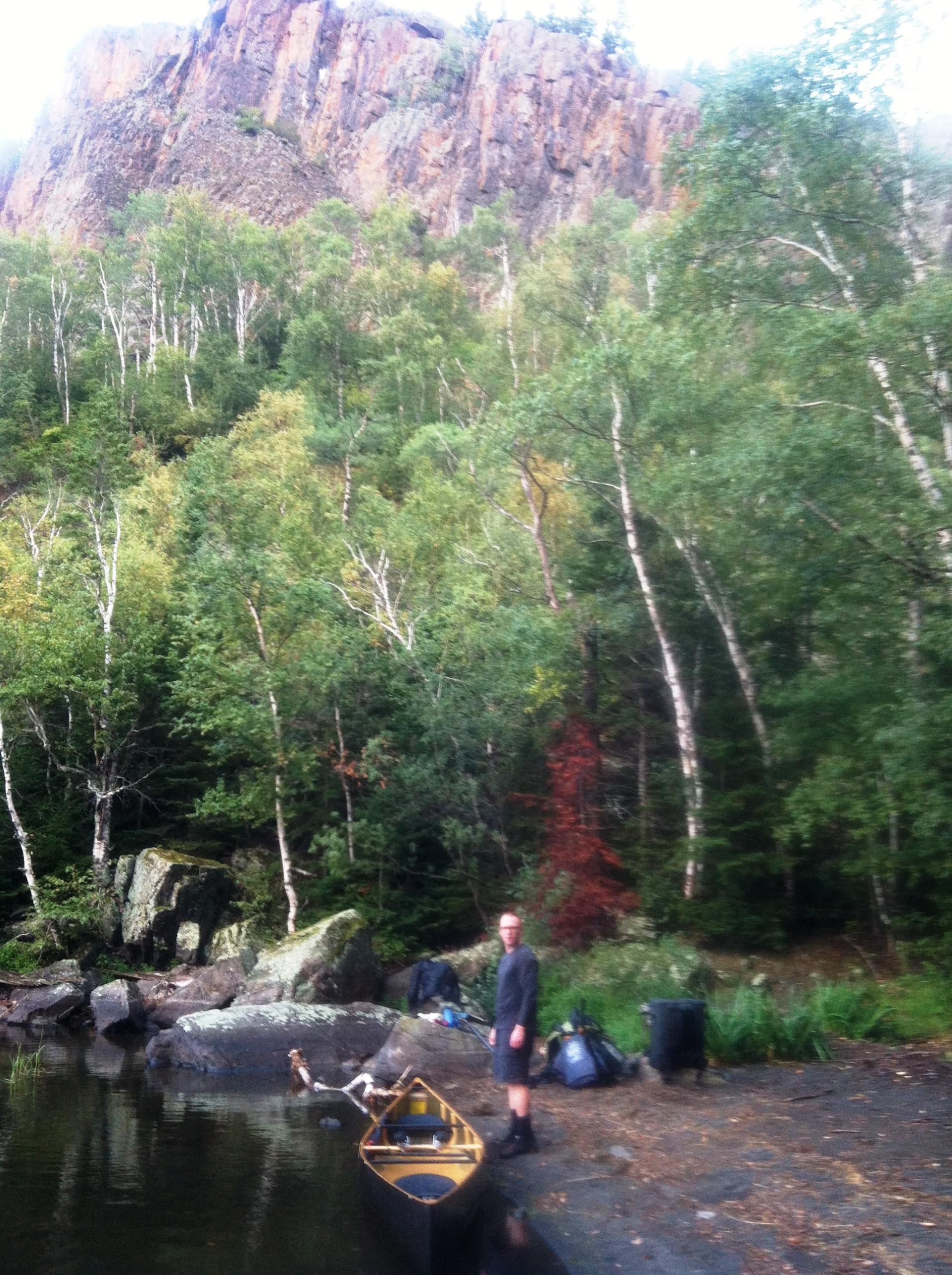