Trip Type: Paddling Canoe
Entry Date: 09/14/2013
Entry & Exit Point: Quetico
Number of Days: 4
Group Size: 2
Trip Introduction:
My goal for this trip was to introduce my dad to a park that he's heard me talk almost non stop since my first trip in 2005. I chose the Carp Lake area due to both its close proximity to an entry point as well as its limited number of daily permits. I was also attracted to the presence of lake trout and all around good fishing given the short travel time that was required to get there. I was fortunate enough for this to be my second trip to the Q during 2013. I apologize in advance for the bullets. I prefer this format when in a word document. Unfortunately it doesn't translate well to an online format.
Discuss Trip: View Discussion Thread (5 messages)
Day 1 of 4
Saturday, September 14, 2013

•We awoke to the sound of wind. Not what I was hoping to hear. •We walked the packs down to the outfitters dock and after a quick breakfast of pancakes, bacon, OJ and coffee at the outfitter's the wind seemed to subside as we loaded the jon boat for our tow up Moose to Prairie Portage. •Once we arrived at our drop off point, the tow boat operator caused me confusion for a second when he asked if he should portage our canoe across Prarie Portage? With Carp Lake as our destination, this didn’t seem to make sense. I showed him the map and he confirmed that he was mixed up. •While we prepared our canoe with canoe seats, depth finders, painter lines, gear, etc, we encountered several other groups of paddlers heading into the park. •Finally we began our journey to Birch Lake and then on to Carp. •At the Birch/Carp portage, we ran into a solo paddler, who pretended to give us campsite advice for Carp, but in fact was obviously steering us clear of his destination island campsite in the north east corner of Carp. I know this because he had good things to say about every campsite except the one that was spoken highly of by the online forum members. Finally I asked him which campsite that he was considering and sure enough he pointed to the island. •He was moving much faster than us so I had no issue in ceding this site to him. We appreciated him giving his opinion of the other campsites. •Once we achieved some distance between ourselves and the portage, we began trolling the southern shore of Carp. •We immediately got action. I caught a couple smallies and dad fought a nice smallie that eventually shook his crankbait loose. •Finally I landed a nice 29” lake trout that tied my largest Quetico Lake Trout. Beautiful fish that was successfully released. •We settled for the middle of three campsites located at the pinch point halfway down Carp. •PB&J on an ‘everything’ bagel for lunch. •I quickly set up the tent and tarp, while Dad looked for wood. •Eventually I assisted and we gathered a decent pile of sawed and split wood to keep dry under the tarp. •Wood gathering caused us to build up a sweat so we decided to cool off in the lake. Dad splashed himself with some water while I opted for a full-plunge. Very refreshing. •We decided to try our luck fishing near the falls into Sheridan. Surprisingly, no action near the falls, where water quickly reached substantial depths. Carp is a very deep lake with many sections over 100ft deep. •Dad needed a stretch due to a loose camp chair that put him in an awkward angle within the canoe. We stopped at an adjacent island to walk around. •Dad revisited the idea of a “swim” as he lost his footing on a slippery slab of rock on one of the islands that we decided to explore. In hindsight, we probably could have found a better landing zone, but even he admitted that the cool water felt pretty good after building the sweat from cutting and splitting wood. There was a light breeze and within a half hour he was dry. •I hooked into a few smallmouth while fishing from the shore of the island. •We headed back to camp for dinner. Hot water + dehydrated spaghetti + dehydrated burger + dehydrated sauce + dehydrated mushroom + parmesan cheese packets = a pretty tasty, carb-charged meal. •Despite clouds beginning to roll in, I started the campfire only to have the rain begin right as the sun set. The mission to start a campfire was quickly aborted. •It was a light rain. We set up the camp chairs underneath the rain tarp where we finished off night one, before heading to the tent. With the cloudy sky, headlamps turned off and my cigar extinguished, we really got an appreciation for just how dark it can get without moonlight. •A light to moderate rain continued during the night. 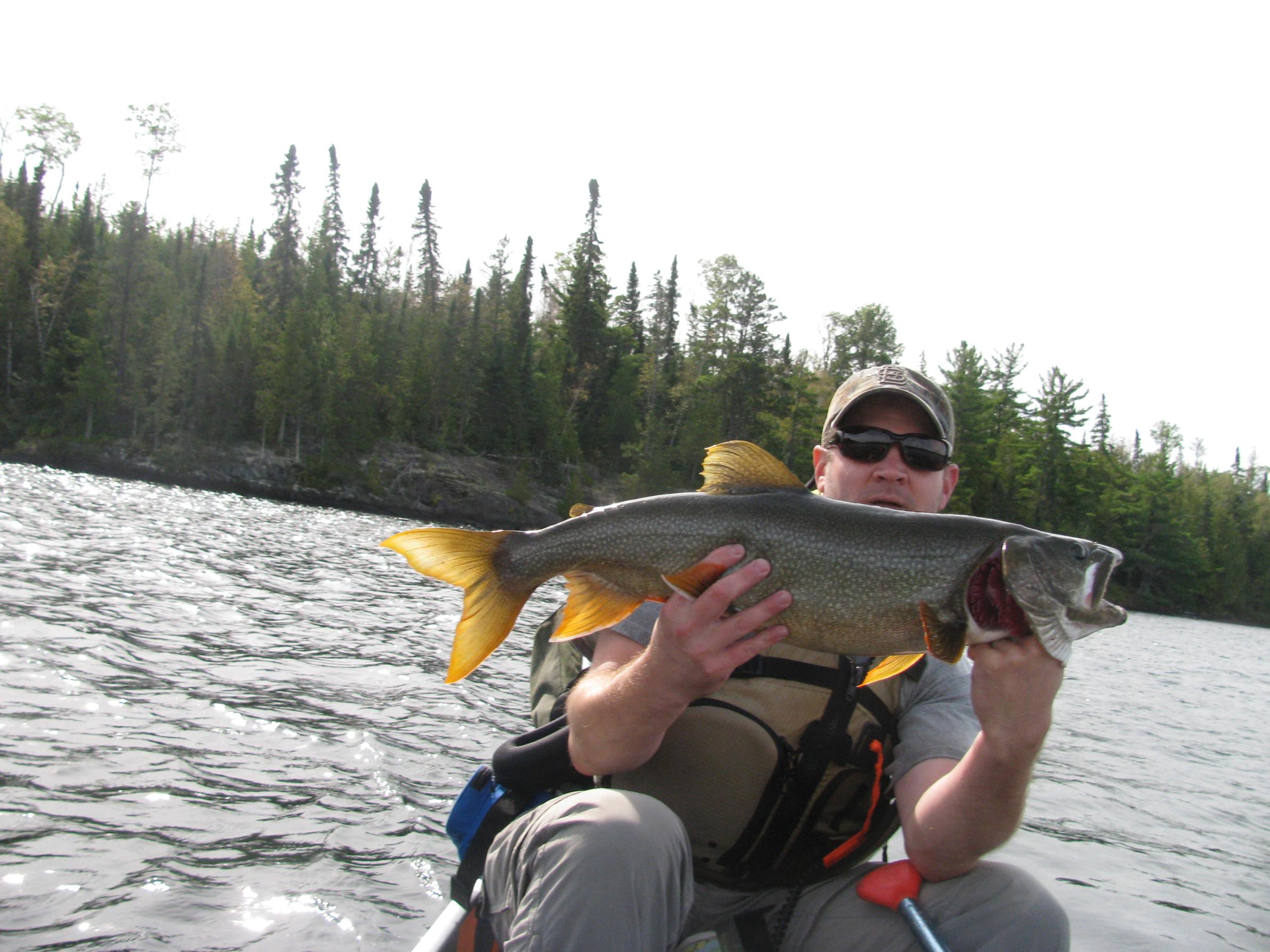