We spent the night at Canoe On Inn since our tradition is that it rains when we camp and hey, why not have one last night of dryness! Breakfast at Brittons = awesome!

We headed toward our EP and were ready for our first trip down the wet, and kind of muddy 140 rod portage by 7 am. We had the trail to ourselves and enjoyed the walk down this pretty nice trail. The portage trail is actually a nice trail for terrain with only a short drop toward the end. I'd say one of the easier trails of this length. 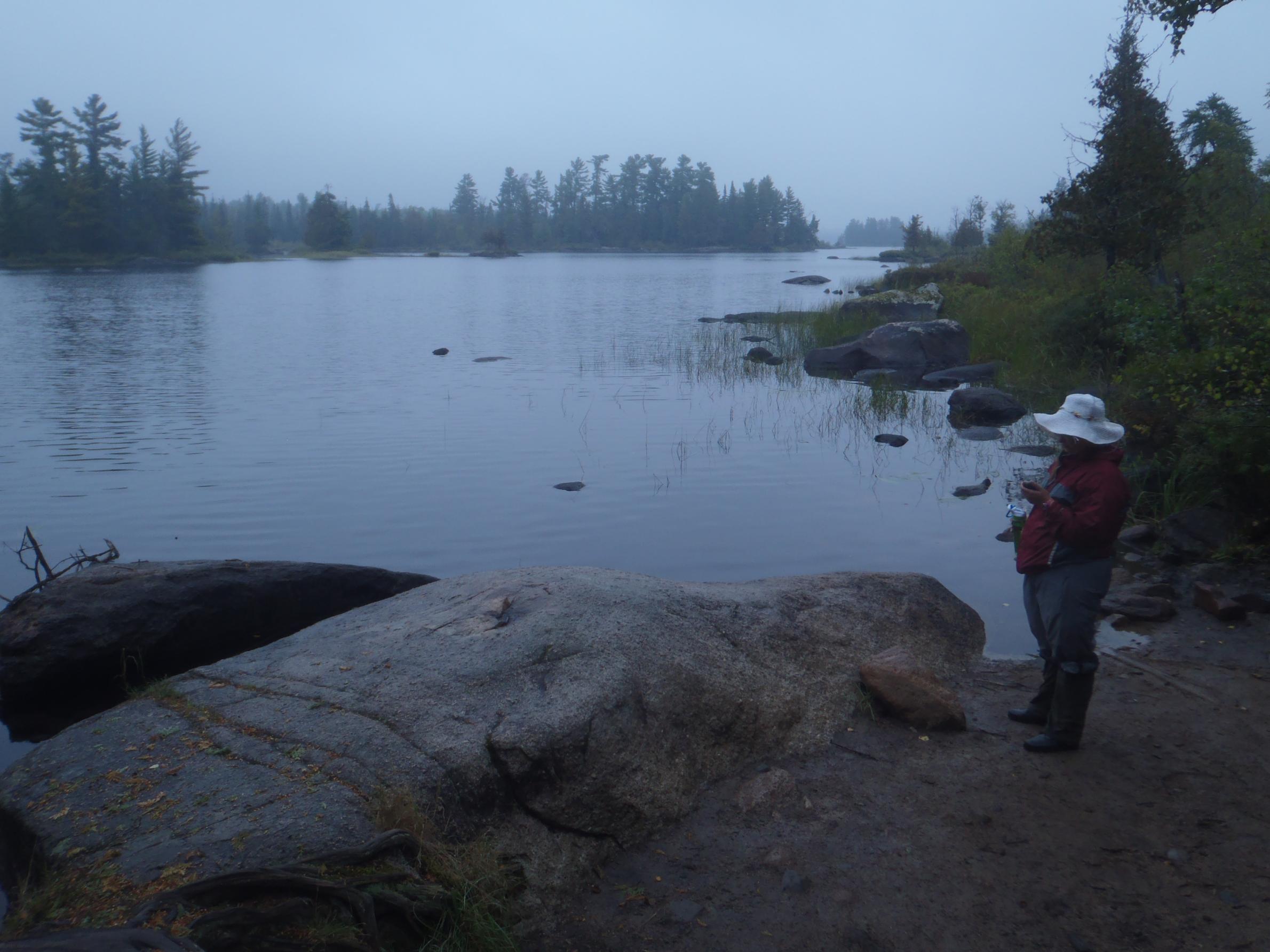 We had expected thunderstorms last night so finding they had not happened when we got up this morning was nice. But it also meant they could still be coming (I never get lucky enough to miss the rain). So we headed down the portage trail in 66 degrees with light fog and humidity.

Back for the second trip of our gear (we opted to pack in lighter packs since my paddle buddy was recovering from a back injury). And walking the trail without a canoe on your head is always a pleasure.

We were back at the EP landing by 8 am and ready to paddle under what was becoming quit dreary skies. We only saw one campsite with anyone camping along this section of the river, and no other canoes or wildlife.

As we approached the 5 rod portage we could hear thunder in the distance. Surveying the skies was not much help as a very low layer of clouds were sheltering the view of what was actually going on in that storm system above us. We were over half way to our destination for the day so based on what we could hear and "not" see, we decided to hug the shore and paddle on to the next campsite while watching the weather. 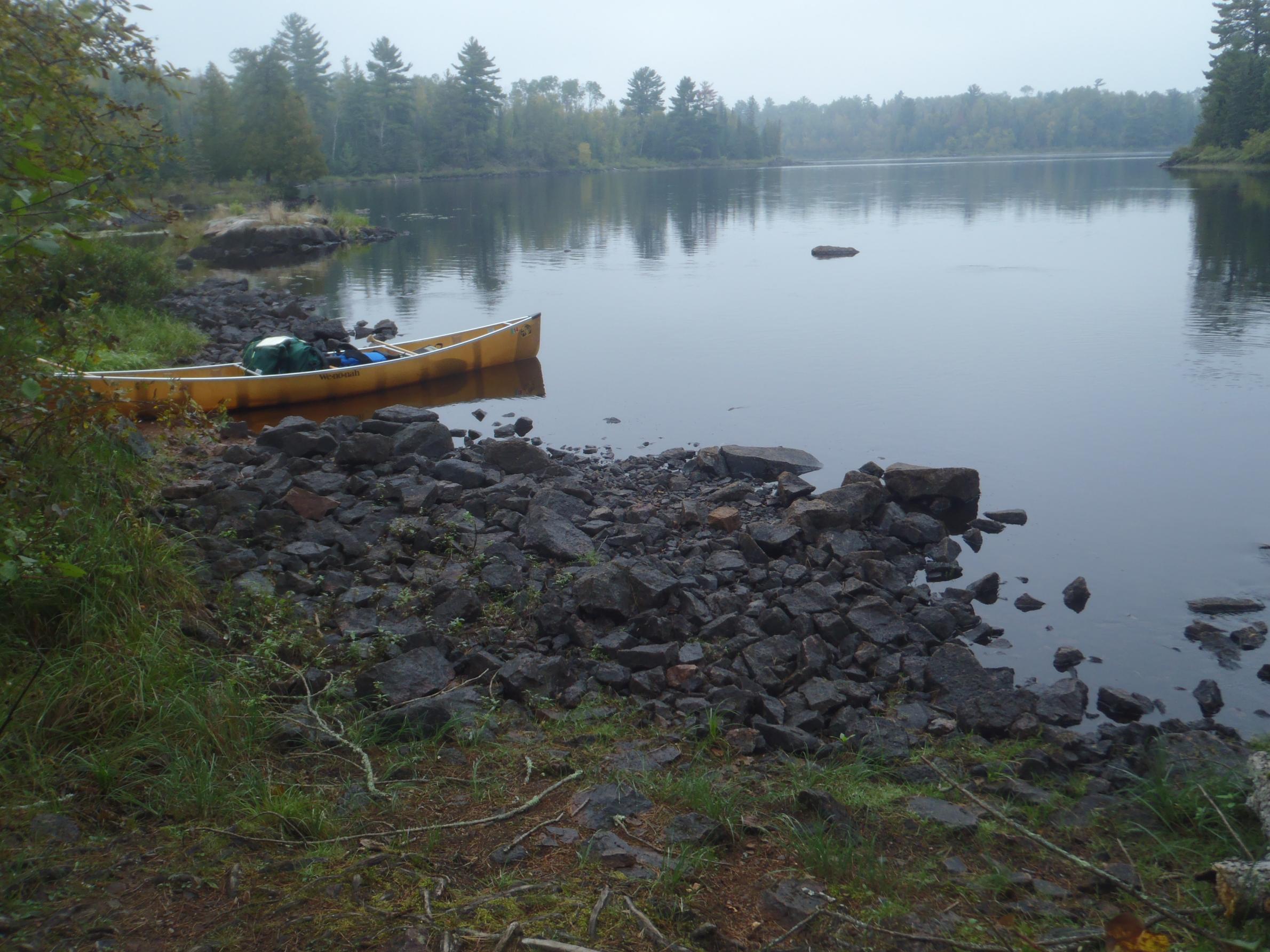 We had paddled no more than five minutes when the thunder intensified and surrounded us (but was still hidden by the lower level clouds). With our Girl Scout skills and safety knowledge ingrained in our heads, we opted to pull up to land and hang out in the woods until the quickly approaching weather passed over us just in case what we couldn't see was worse than it was sounding. 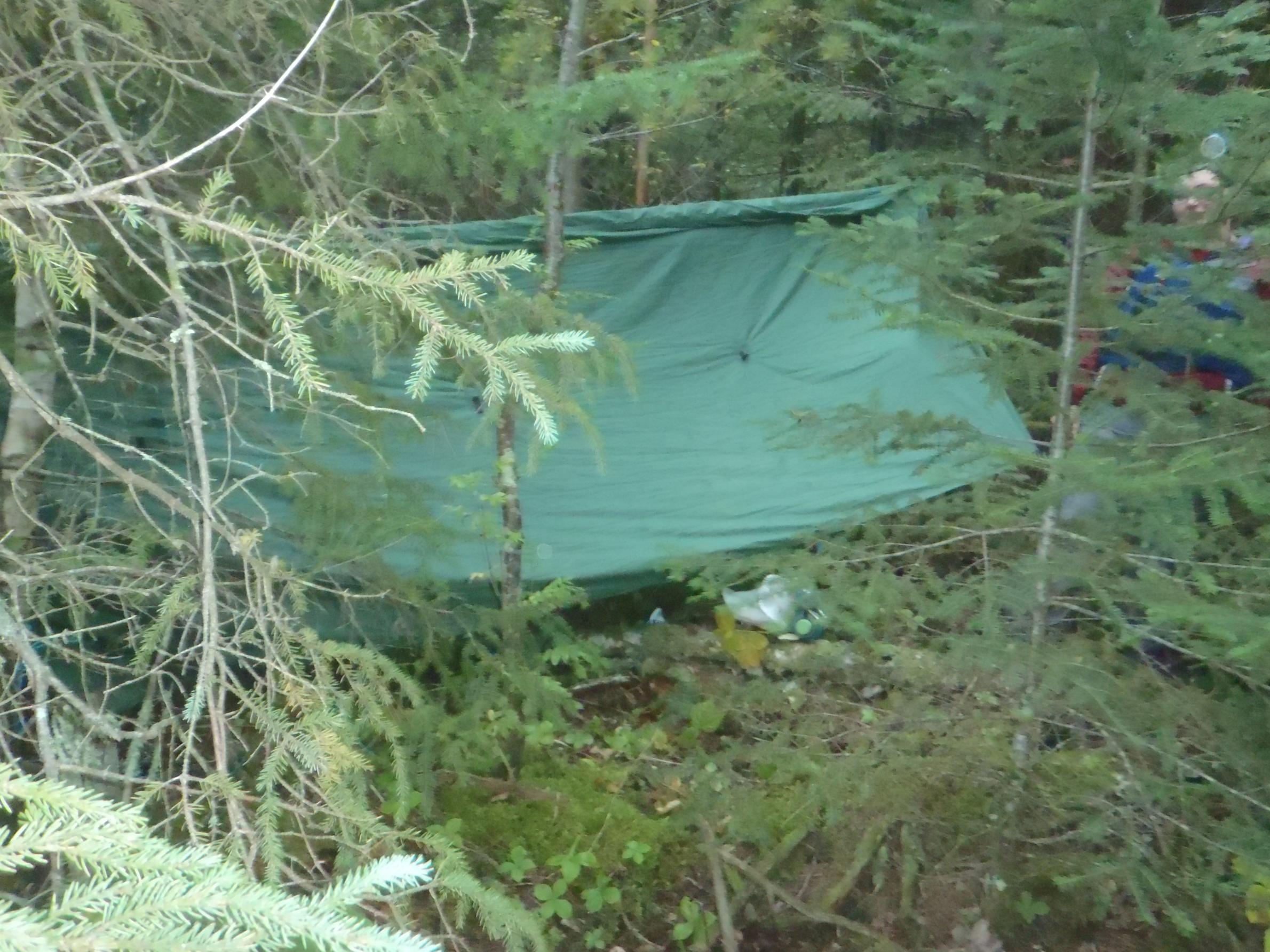 After about an hour the storm had moved mostly past us but another system could be heard not far off. We had a peak at the sky to the north of us which helped us get an idea of what Mother Nature was up to. Since we were not at a campsite, we made a plan to make a quick paddle direct to the first campsite and set up camp before that system moved in on us. Our goal was the campsite on the peninsula along the river between the portages to Eskwagama and Clear Lakes.

We pulled in to the nice landing about noon and immediately went to work setting up the tent and rainfly and getting our gear secured and stored. The rainfly was no more than thrown over the tent when the rain let loose in buckets. 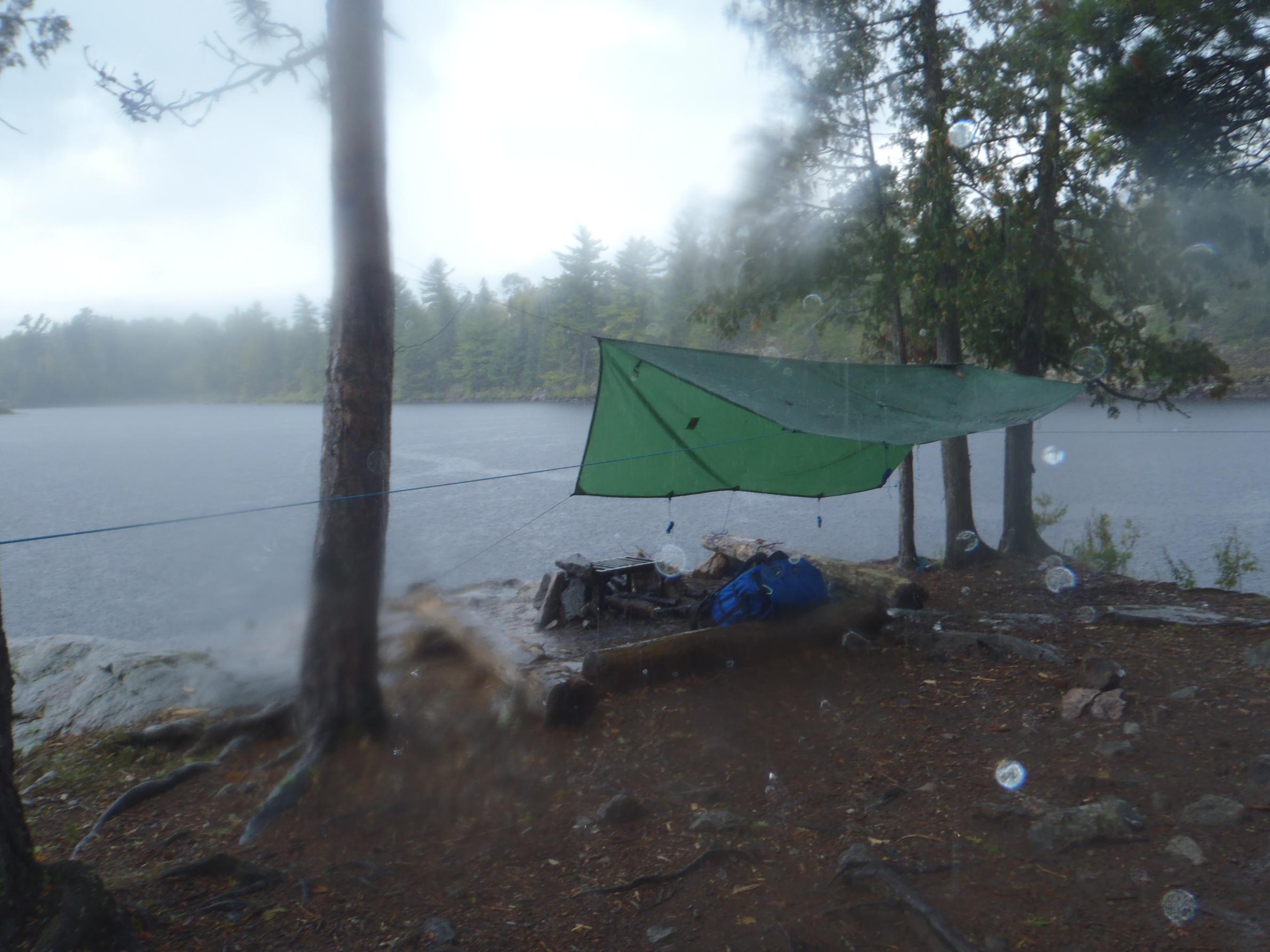 We finished up and took shelter under the rainfly for lunch of pitas and pb&j and oranges. The mosquitoes were out in full force so we retreated to the tent and napped the afternoon away while the rain and thunder continued.

By 5 pm we were ready to get out of our tent and move a little. It was still raining off and on. We put the rain gear back on and headed out to prepare dinner of pizzas over the stove since neither of us were too excited to try to find firewood in the rain. 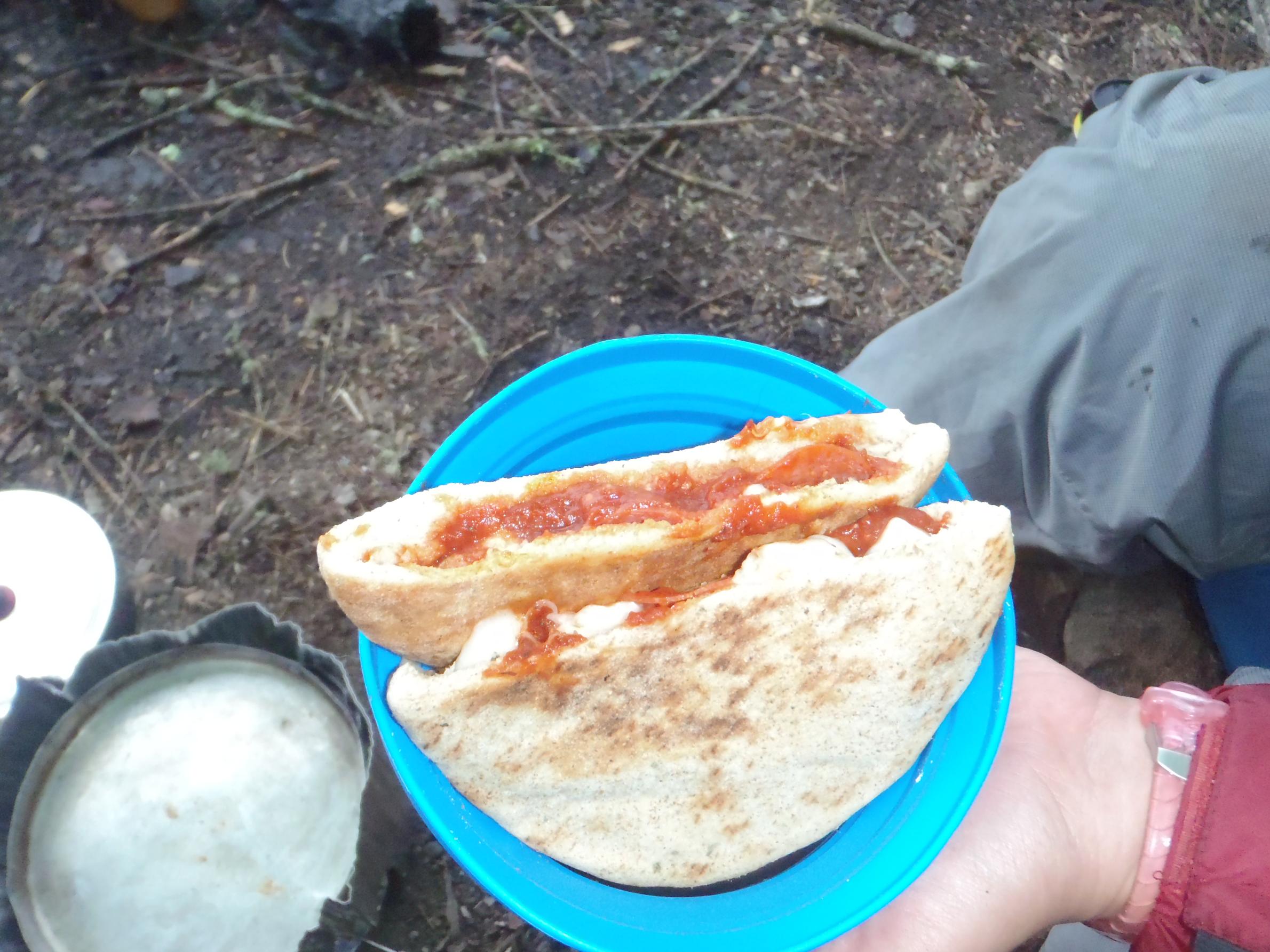 With dinner done and a few million more mosquitoes swatted, we hung our food and settled in to the tent to list to the continued rain. Tomorrow we hope for less mosquitoes and more sunshine.

Our original plan had been to stay at Clear Lake but we have abandoned that plan and are opting to stay where we are and just relax for this trip. The Kawishiwi Triangle will have to wait for another year.