Trip Type: Paddling Canoe
Entry Date: 07/20/2010
Entry & Exit Point: Quetico
Number of Days: 9
Group Size: 2
Trip Introduction:
The "Dances with Eagles" Trip
Discuss Trip: View Discussion Thread (6 messages)
Report
After months of anticipation, my wife Carol and I looked forward to our second Quetico trip together. On Monday, July 20, we loaded up our 17-foot tandem Wenonah Spirit II, 3 packs worth of food and gear, and headed north from our home in southern Wisconsin. Around 5 PM, we arrived in International Falls, Minnesota. After a nice steak dinner at a restaurant located in the south end of town, we headed to the motel and turned in early.

We were up at dawn on July 21st. After a quick breakfast, we headed toward the Canadian border customs station after paying the exhorbitant bridge toll. The customs interrogation went smoothly, so we high-tailed ENE toward Atikokan on Hwy 11. From highway 11, we turned right south at the easy-to-miss Flanders sign and headed south on the gravel road.

The last leg of the trip was 14 miles of gravel, the first 10 miles on a well-maintained gravel road. The road points south toward Namakan R/Lac La Croix, but we took the left turn and headed a bit SE toward the NE corner of Beaverhouse Lake. The last 4 miles was a narrow 2-track rut, with the alders and popples encroaching closely on both sides. I nervously honked my horn before every turn on this 2-track, as I have witnessed some pretty careless driving on this stretch in the past. Miraculously, we saw no abandoned/wrecked vehicles along this hazardous stretch. Carol and I arrived safely around 8:30 AM at the gravel parking lot near Beaverhouse Lake.

The portage from the parking lot to the shallow stream that empties into the NE end of Beaverhouse Lake was flat and easy. Since Carol's knees were bad we took our time and double-portaged our gear and canoe. (Recent update: she had knees replaced in 2011 and 2012...no regrets.)

After leaving the shallow stream at the portage, we paddled south 2.5 miles across Beaverhouse Lake. Beaverhouse is a gorgeous lake in its own right, with clear water and some fine campsites. At 10:00 AM, we beached the canoe in a small bay, home of the Beaverhouse Lake Ranger Station. The ranger was quite helpful and recommended some fishing spots on Quetico Lake. We purchased our Quetico permits and Ontario conservation fishing licenses, then pushed off and paddled 1.5 miles SE toward the Beaverhouse-Quetico Lake portage. 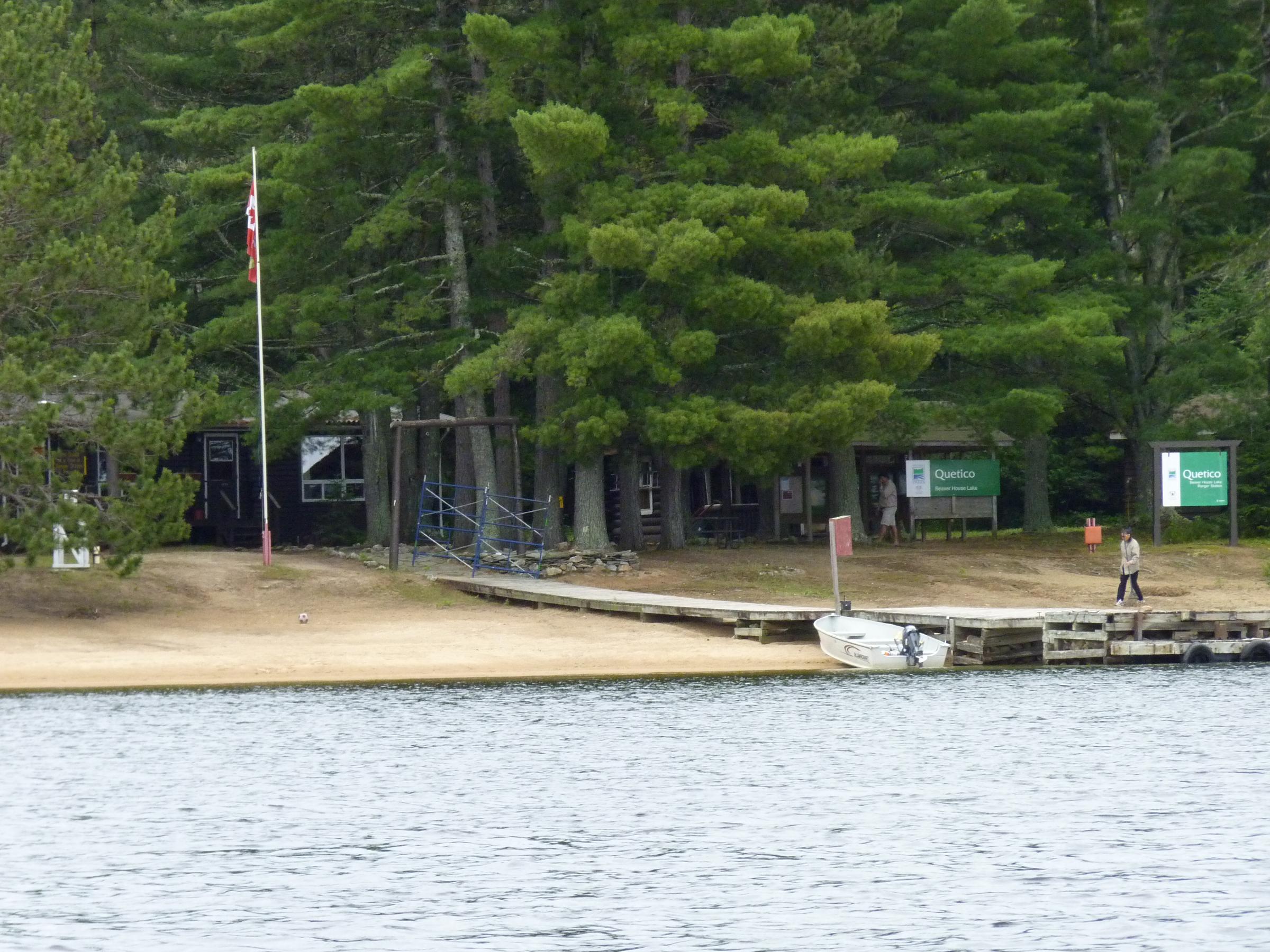 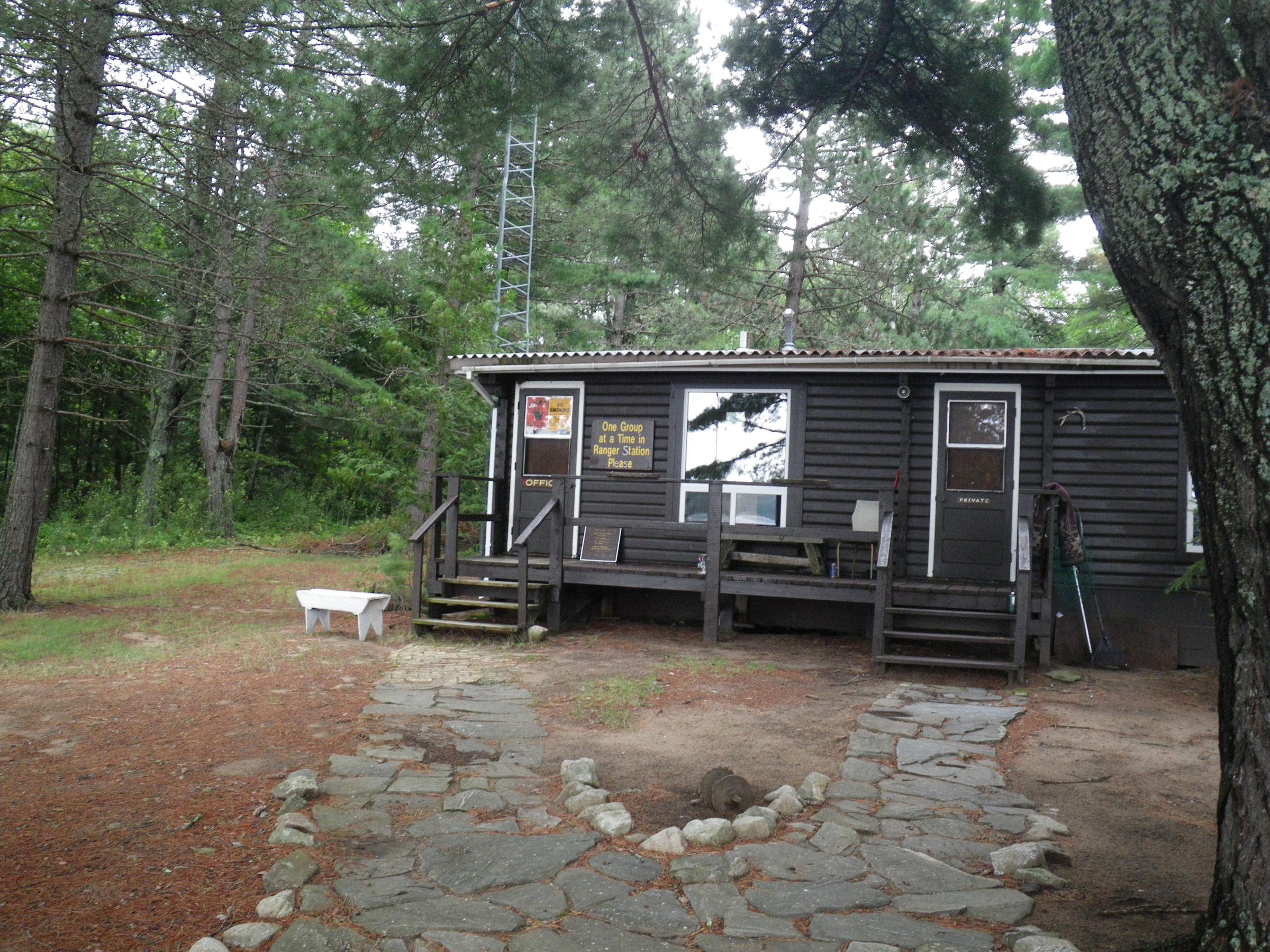 This portage, affectionately known as the "Garden Walk" was short and easy, except for a couple ankle busters in the shallow water at the south end near the Quetico River outflow. We stopped to take a few photos of the beautiful meadow adjacent to the Quetico River. We also photographed the abandoned rusty vehicle near the path, a relic left from the early 20th-century logging operation that took place in this area. 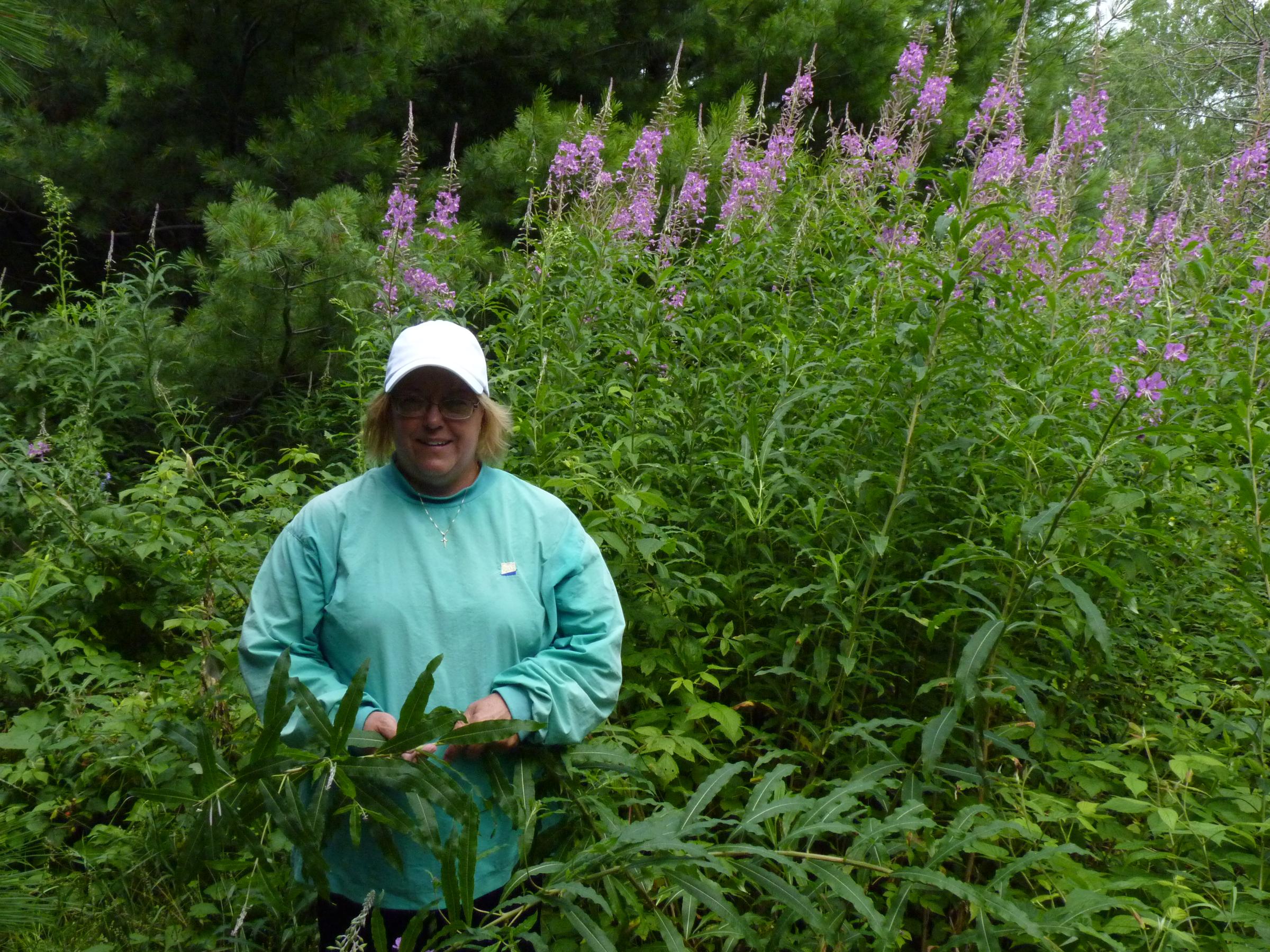 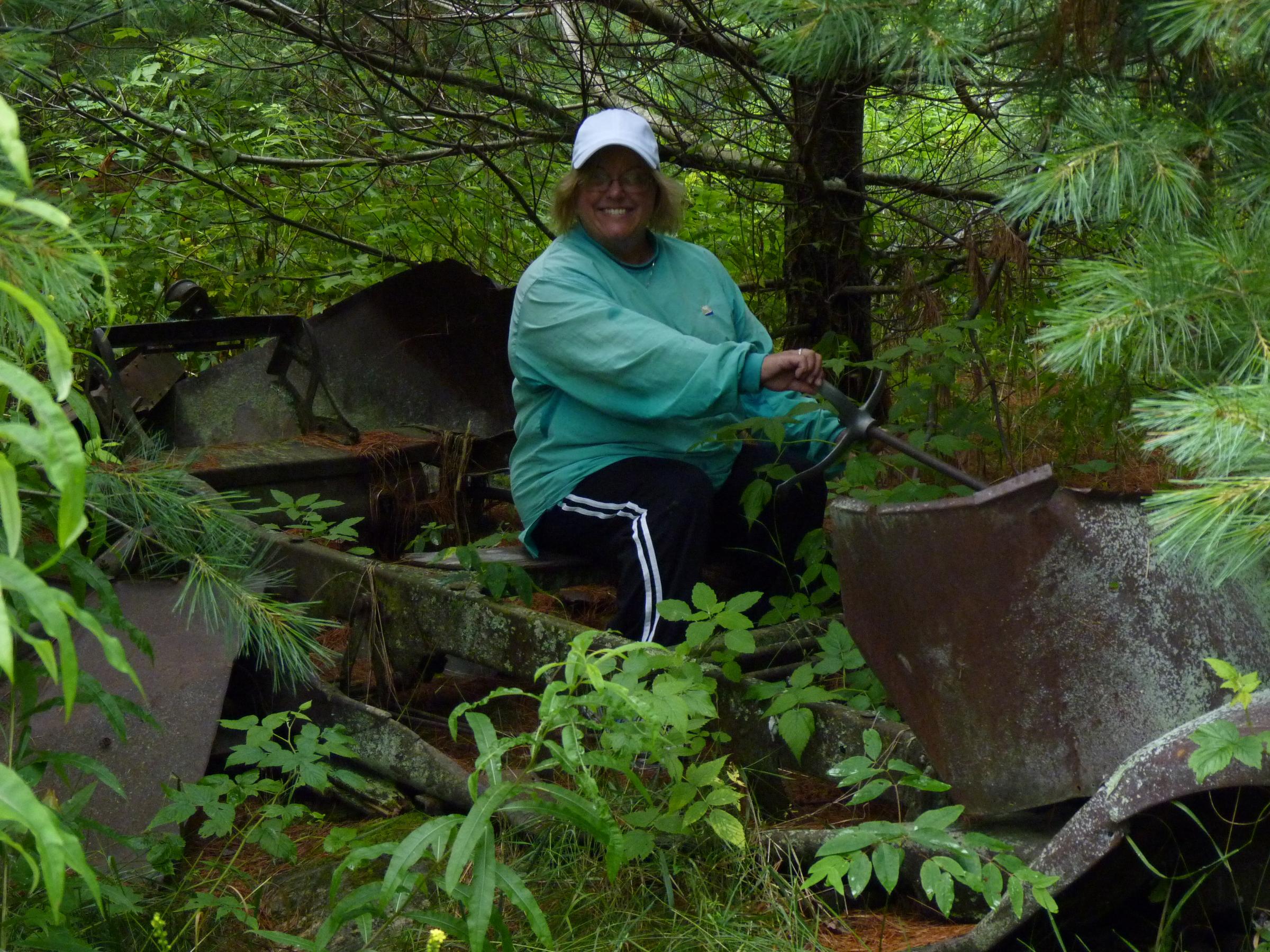 Enjoying the warm summer sun, and with a light wind at our back, we paddled 1 mile east up the Quetico River, where it widened out into Quetico Lake. Quetico Lake is beautiful, with several sand beaches, high cliffs, and densely conifered islands. After paddling about 4.5 miles NW on Quetico Lake , we decided to make an early camp just east of Eden Island. 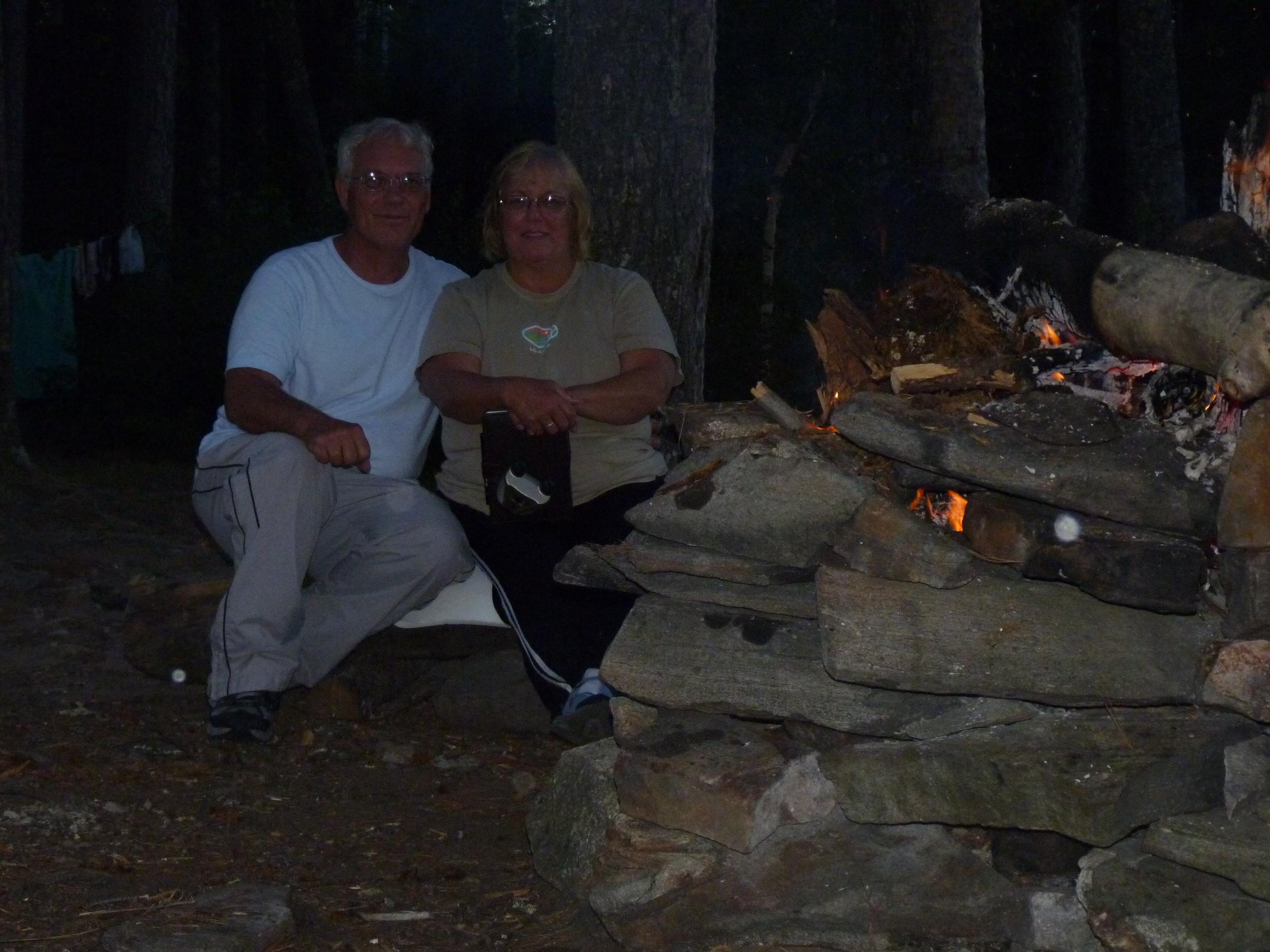 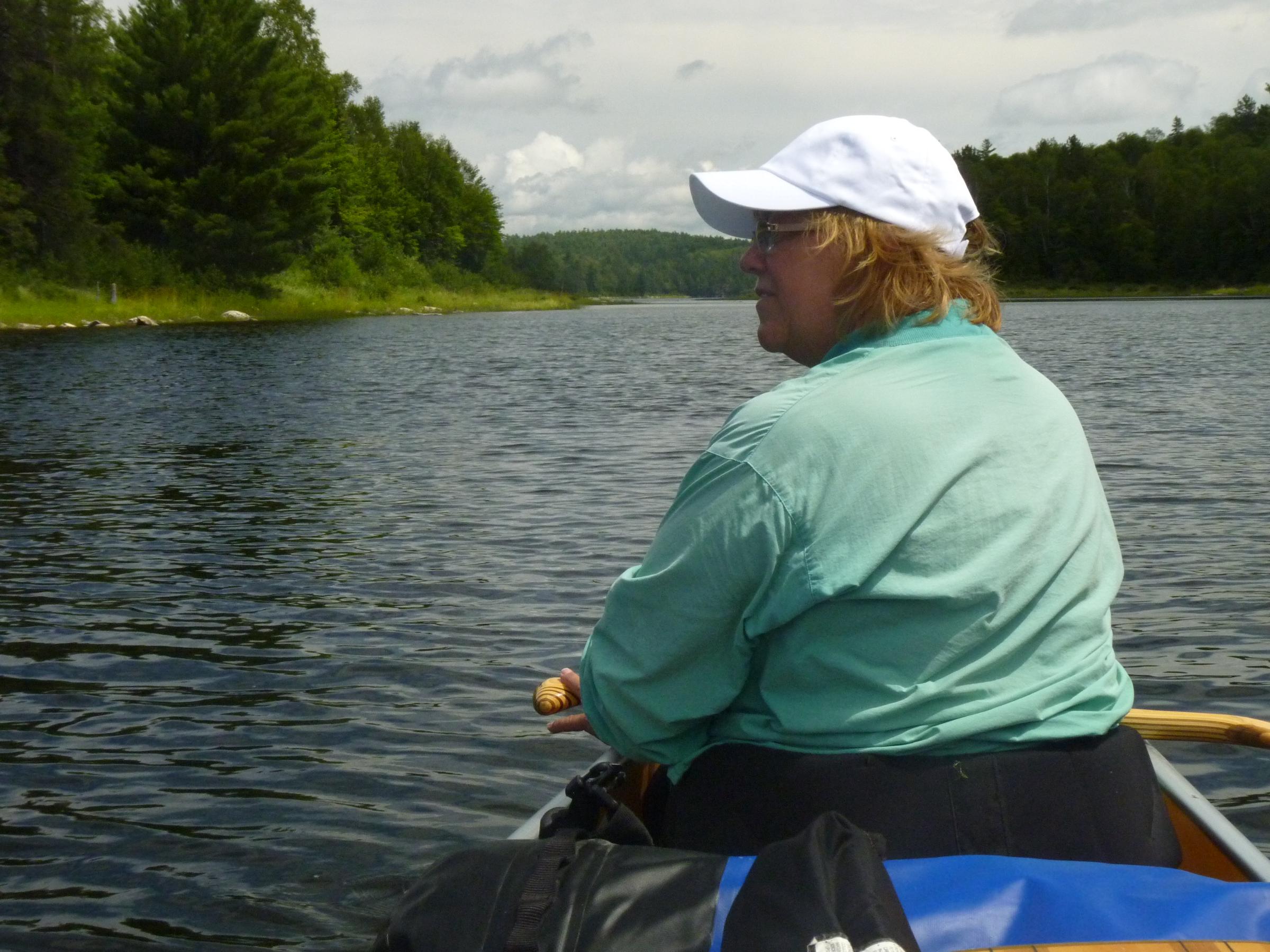 The next day was sunny and beautiful. We broke camp late in the morning and paddled to the north shore of Quetico Lake. We visited a few of the pictograph sites, then headed east toward Kasakokwog Lake. 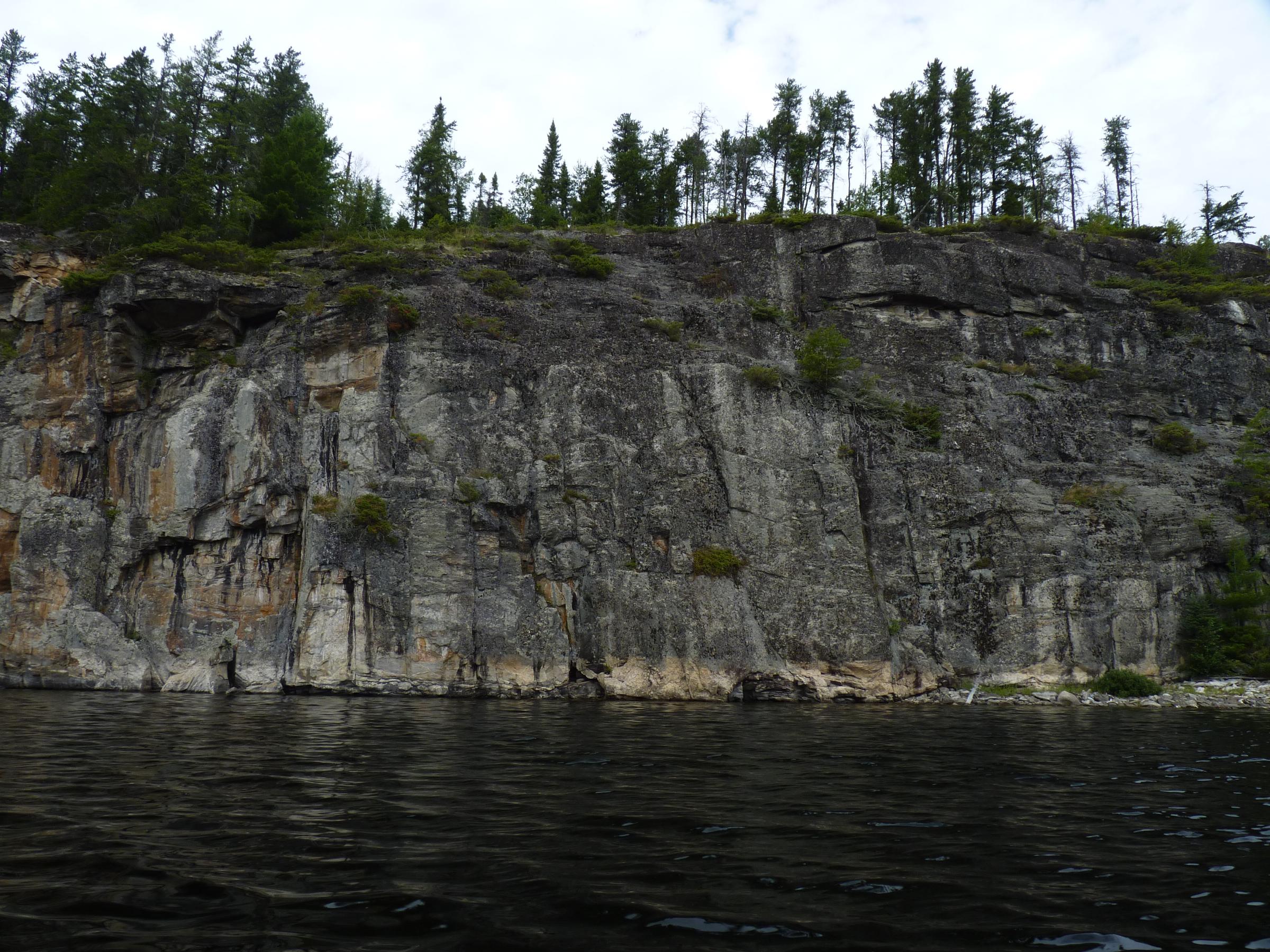 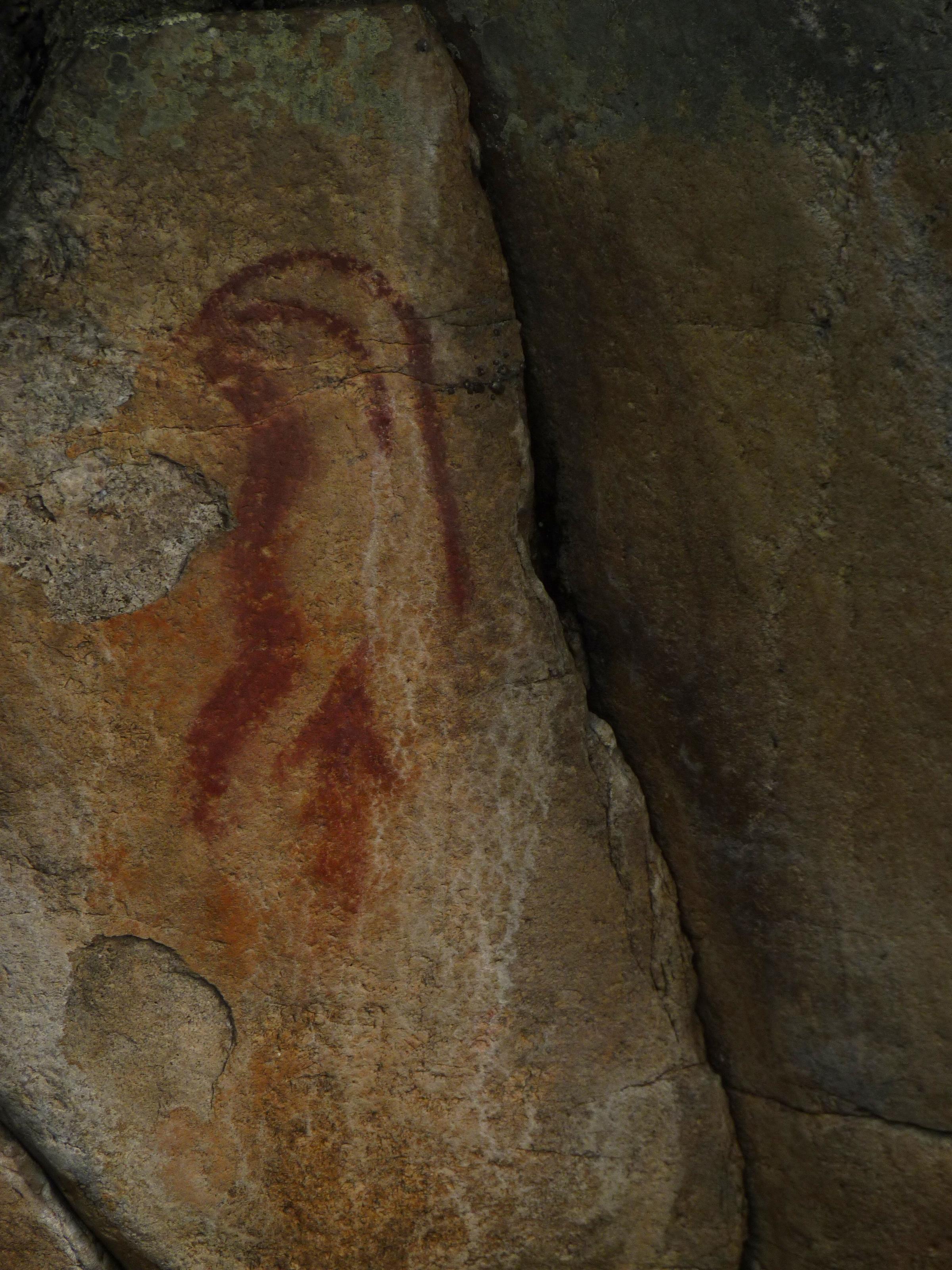 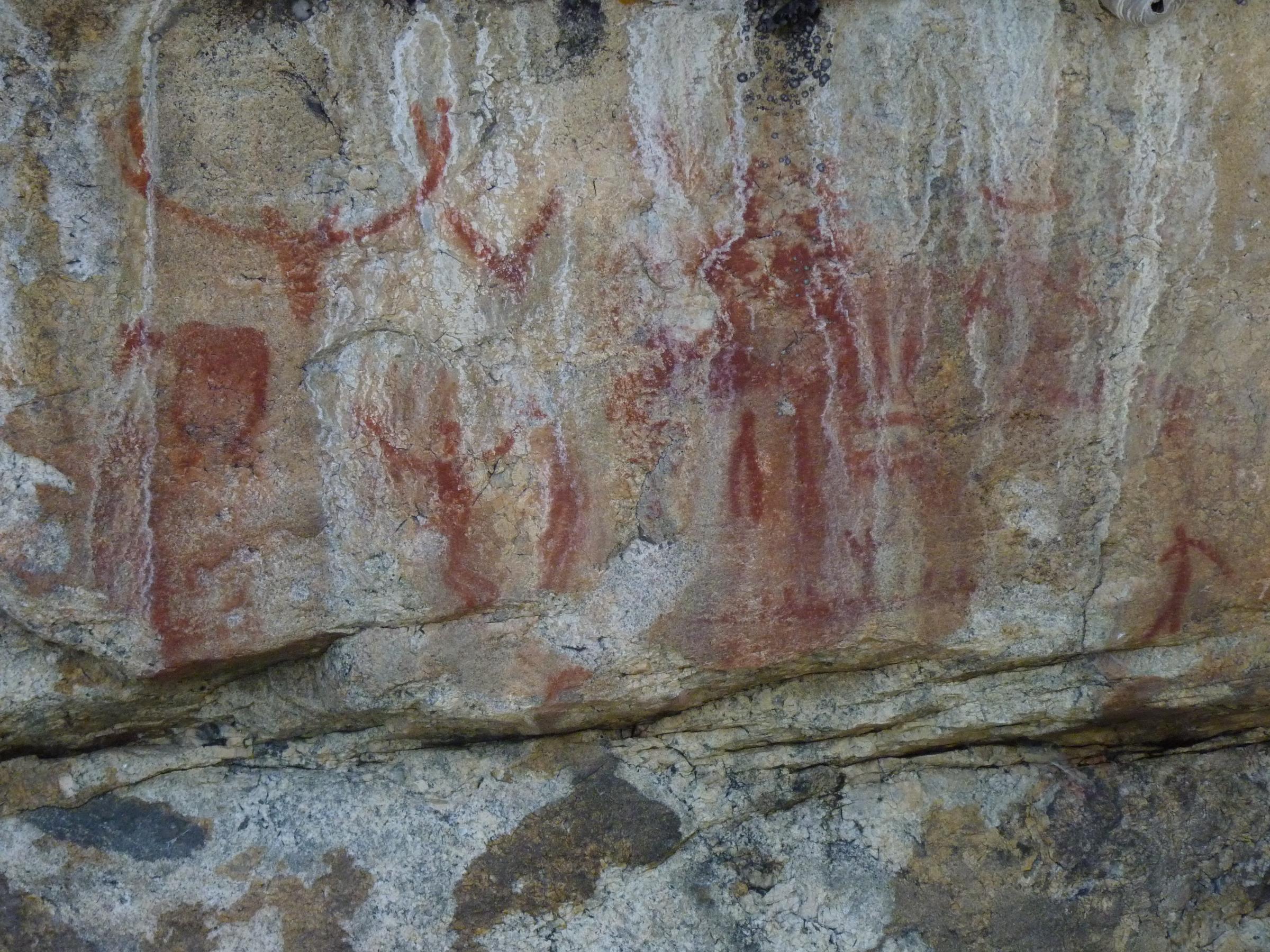 We paddled up the slow current of shallow McAlpine Creek as far as we could, then unloaded the canoes. Gear in hand, we slogged a few muddy steps to the not-too-obvious trail (portage right). This portage was a little long, but only slightly treacherous where the trail narrows at the base of a slippery rock face. We tiptoed through this high part of the trail overlooking McAlpine Creek, then descended and slogged through ankle-deep mud before reaching the east end of the portage at Kasakokwog Lake. 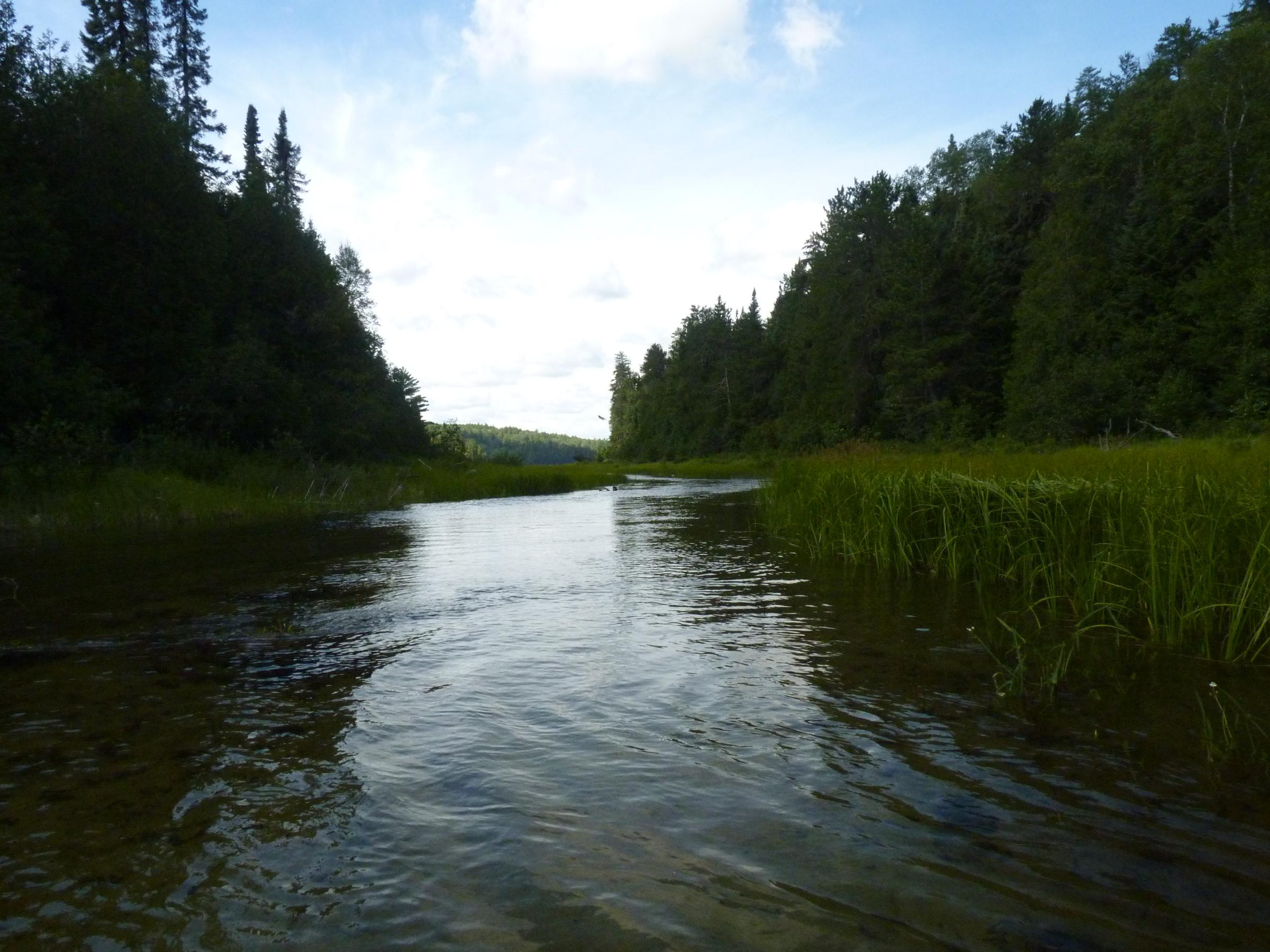 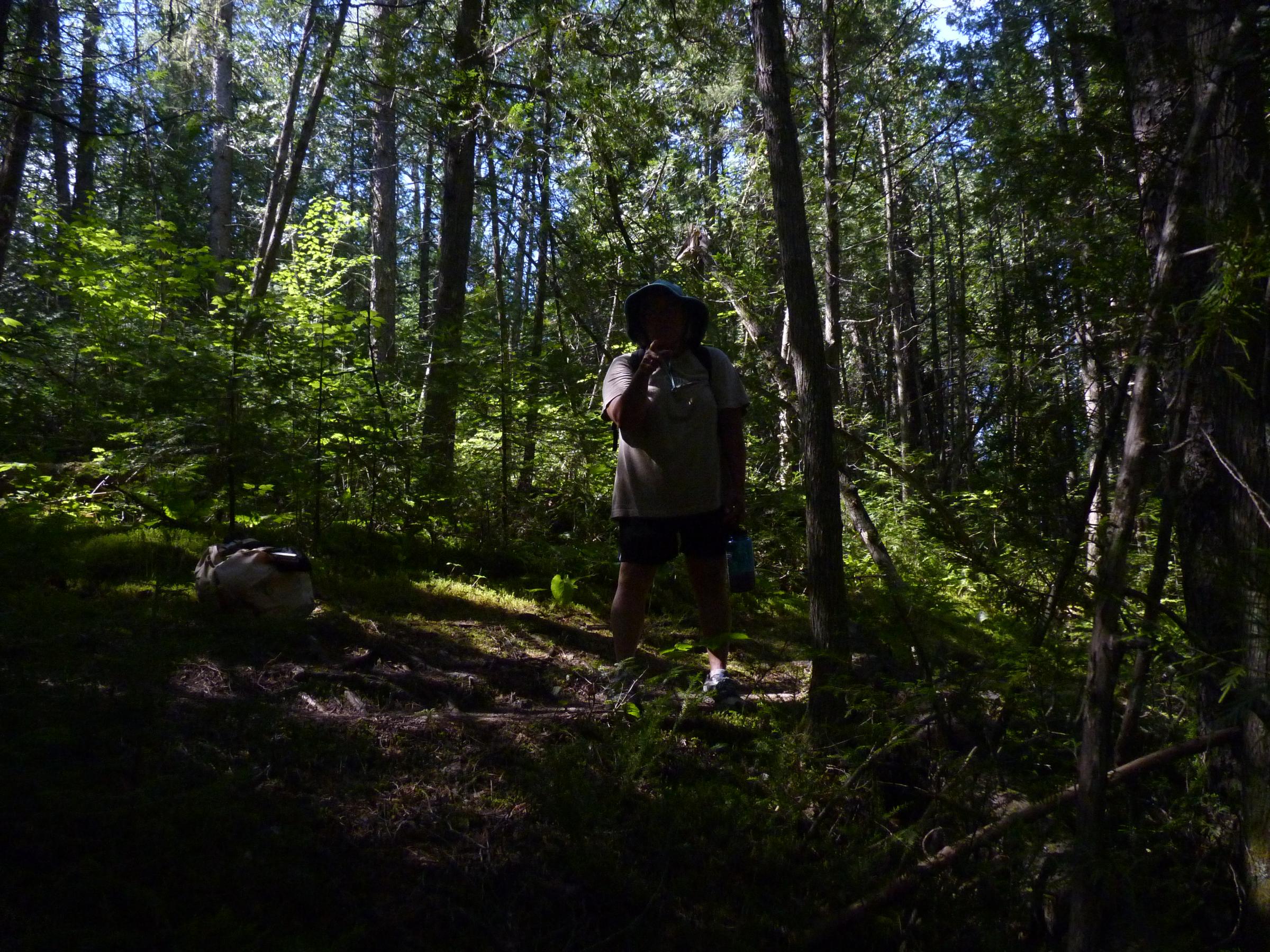 After double-portaging, we took a few propaganda photos of the McAlpine Creek cascade. We pushed off from the portage and paddled 2 miles NE toward the mid-lake campsites on the north shore of Kasakokwog. Around 2:00 PM, we made our first basecamp at a site adjacent to a small bay. We did not see another canoe during our stay on in Kasakokwog Lake. Nice! 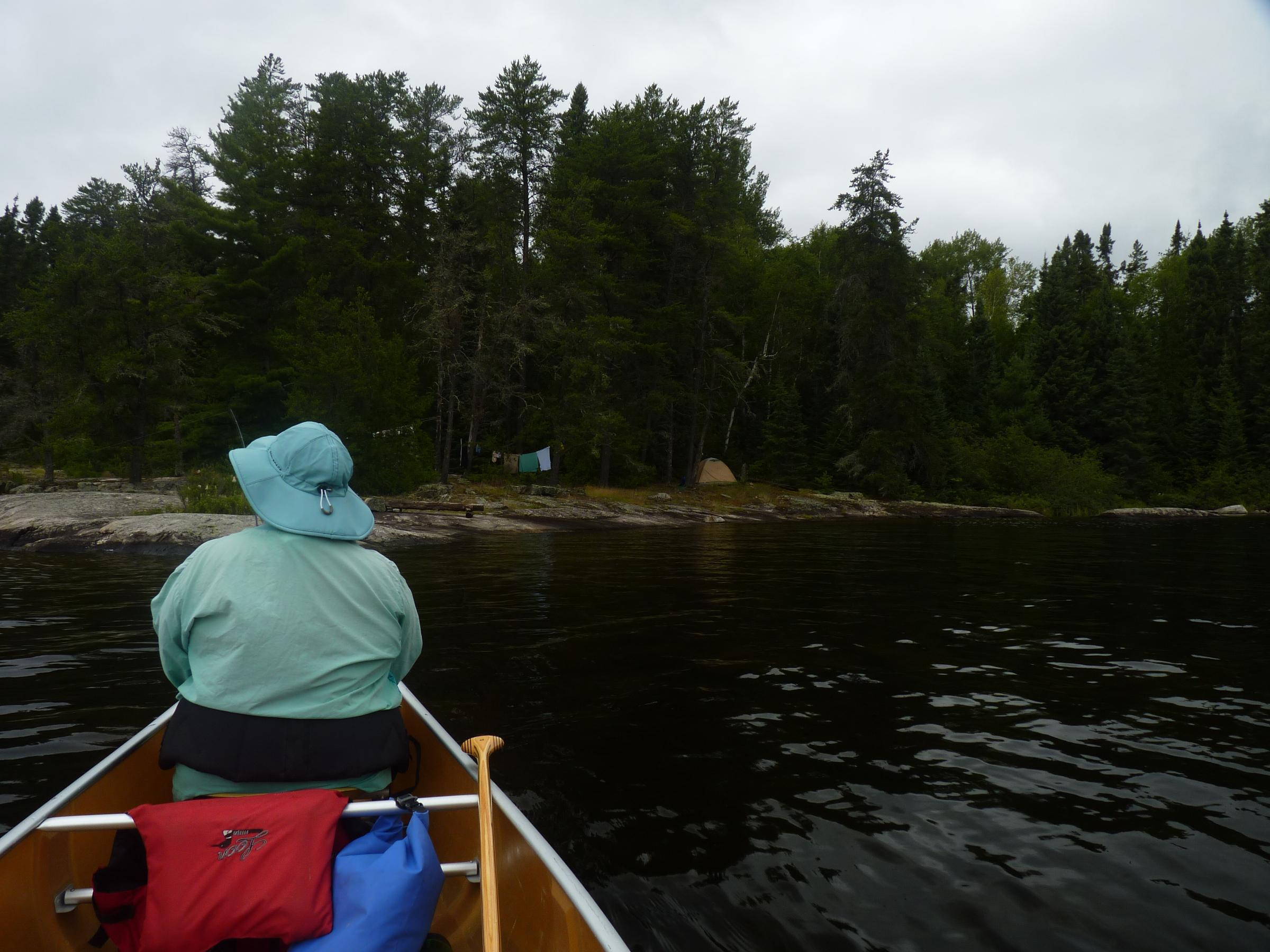 This campsite was not the greatest. I guess I would rate it 3 stars, but there was sufficient firewood close by, and the landing was decent. The tent pad areas were OK and flat enough for our 3-man Cabelas tent. 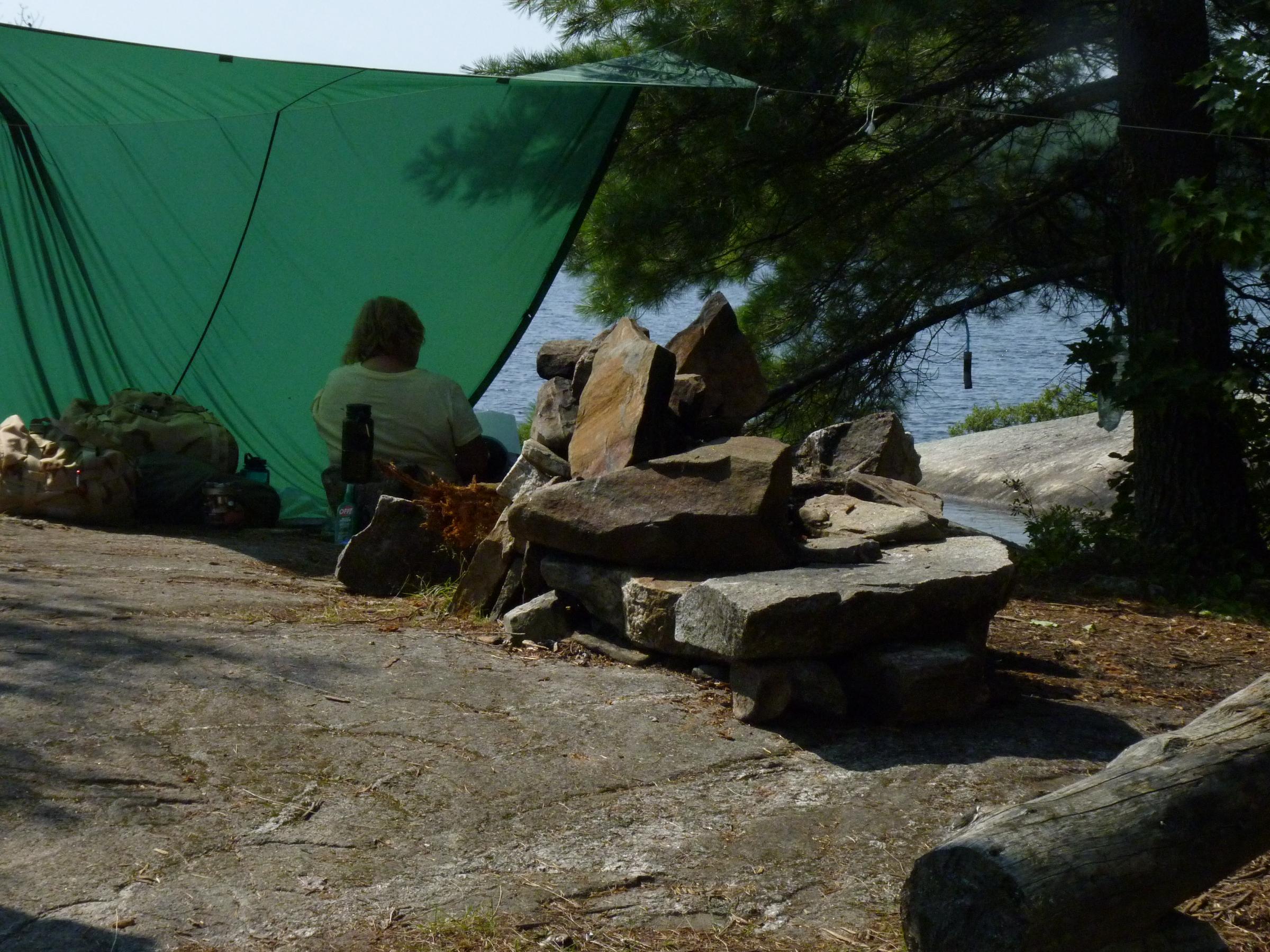 Carol and I spent the next few days paddling and fishing the central part of Kasakokwog Lake. Kasakokwog was very peaceful, just the way we like it. At dusk, after the wind died, we heard the faint rumble of Sue Falls, 2 miles from us on Cirrus Lake. What a nice way to fall asleep!

The fishing in Kasakowog was decent, despite our lack of knowledge on this lake. Carol and I managed some decent 20-24 inch walleyes and a few 18-inch smallmouths, mostly fishing twister tail jigs and crank baits.

The next day, after a late breakfast, we paddled and fished near a small island, located about a mile SE of camp. We noticed that a mature bald eagle was staying close by, perching in several tall pines as we fished the island shoreline. Usually an eagle will spook when we get too close, but not this one. What gives? 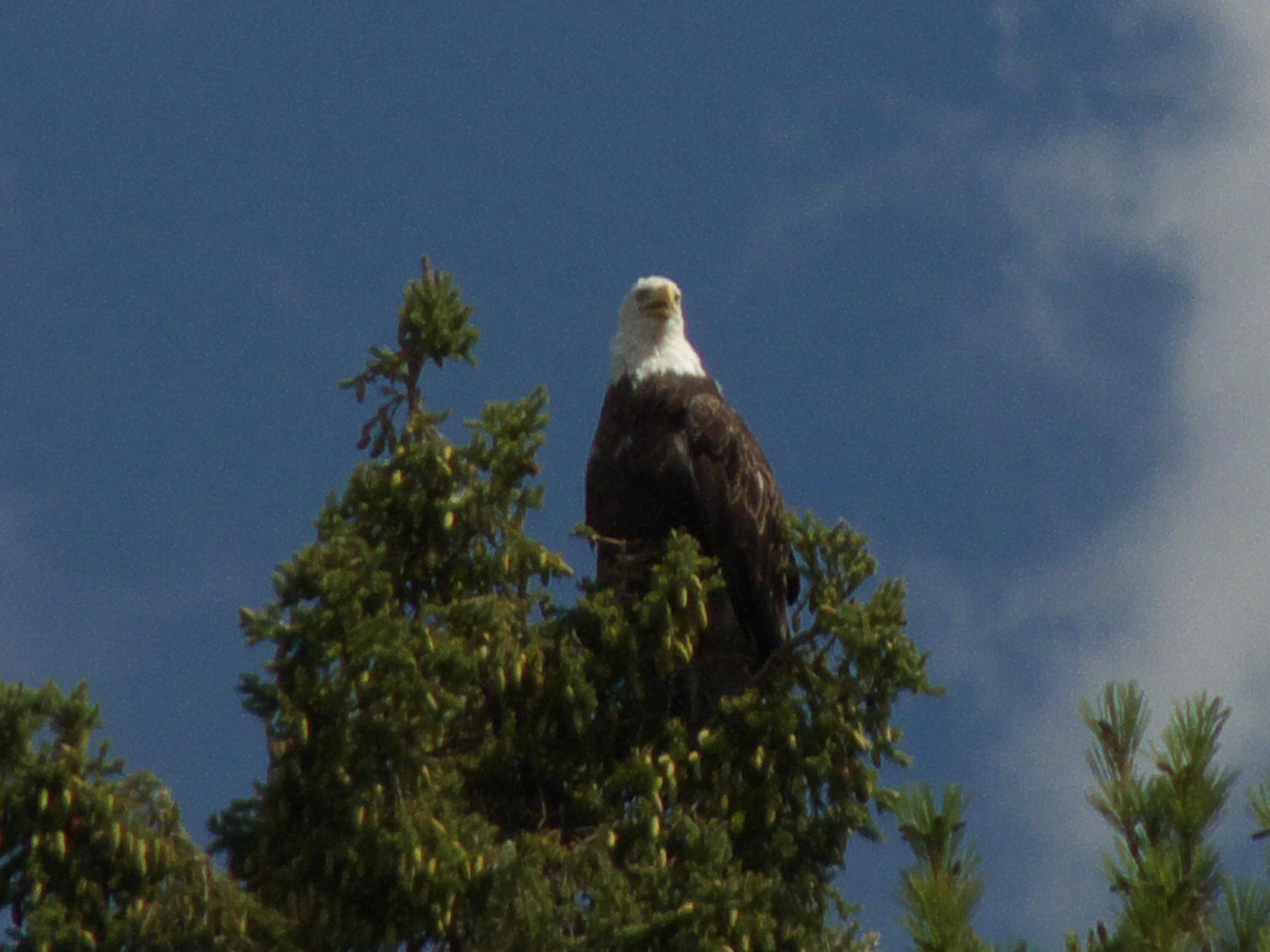 After fishing along most of the shoreline of this island, we finally realized why our eagle-buddy was vigilantly observing us from close range. We spotted a fledgling bald eagle nesting near the top of a large pine! 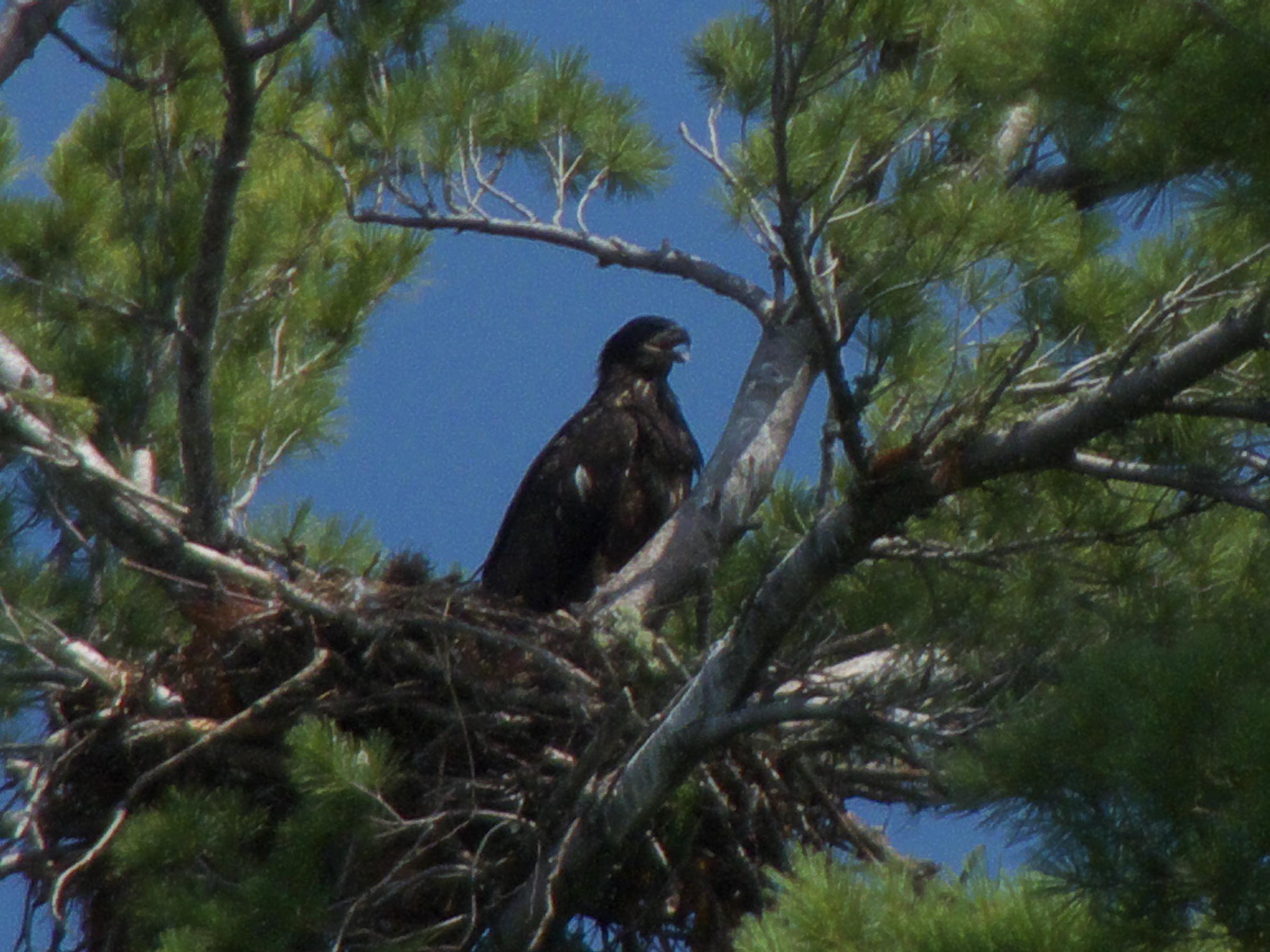 We caught a few walleyes along shore here, and a “just right size” managed to magically unhook itself. The fish floated on the surface for about 10 seconds. Before it could escape, the adult eagle swooped down close to the canoe and grabbed the walleye. The beautiful bird gained altitude quickly, then dropped the wriggling fish deftly into the stick nest for its young-un. 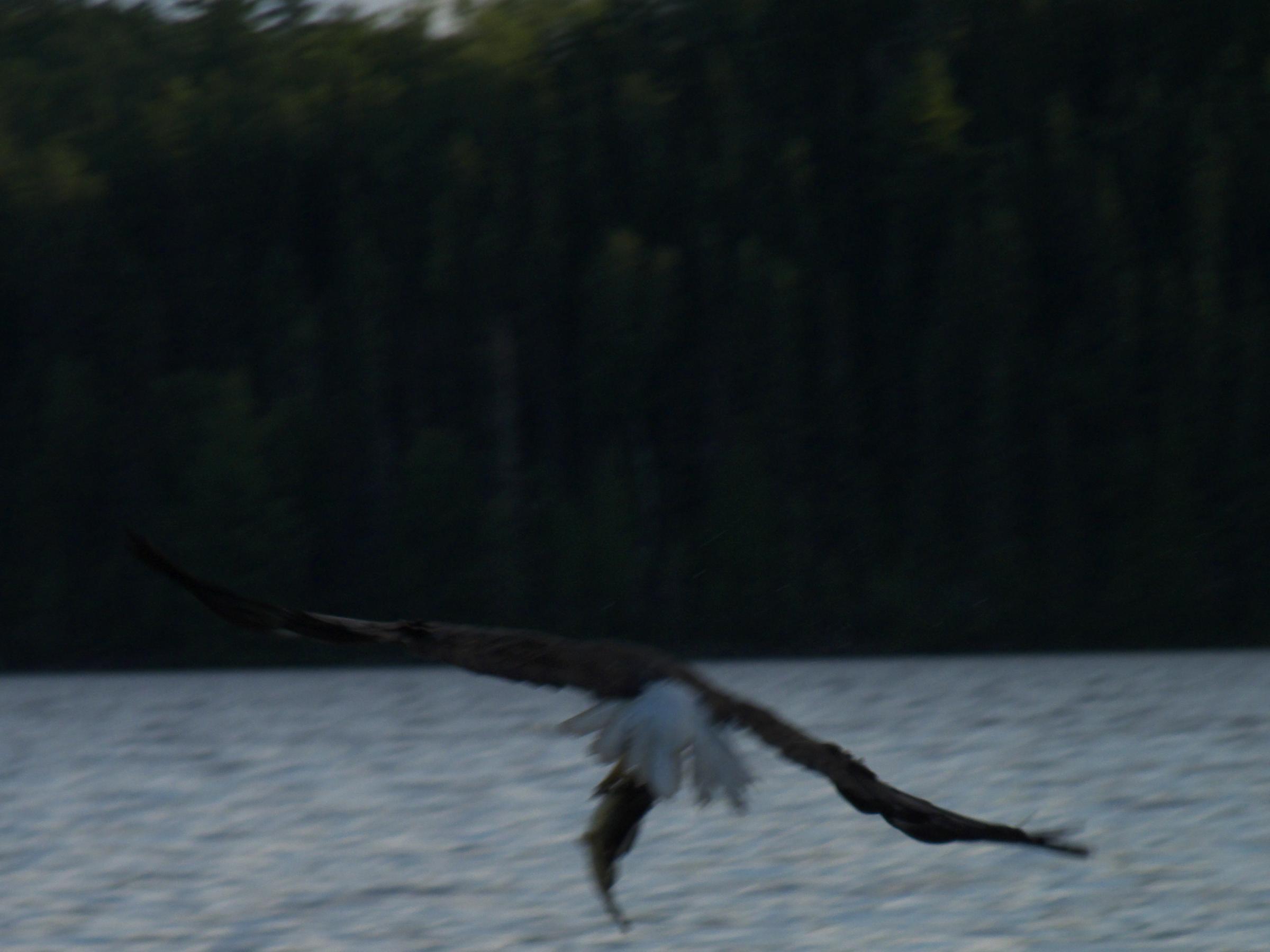 The eagles presented us with a nice photo-op for the next couple days. We fished around the island again, but stayed away from the nest area. The adult eagle observed us from a tall pine in close proximity to the fledgling. It never attempted to land in the stick nest...not enough room. What a great experience this was for my wife and I! 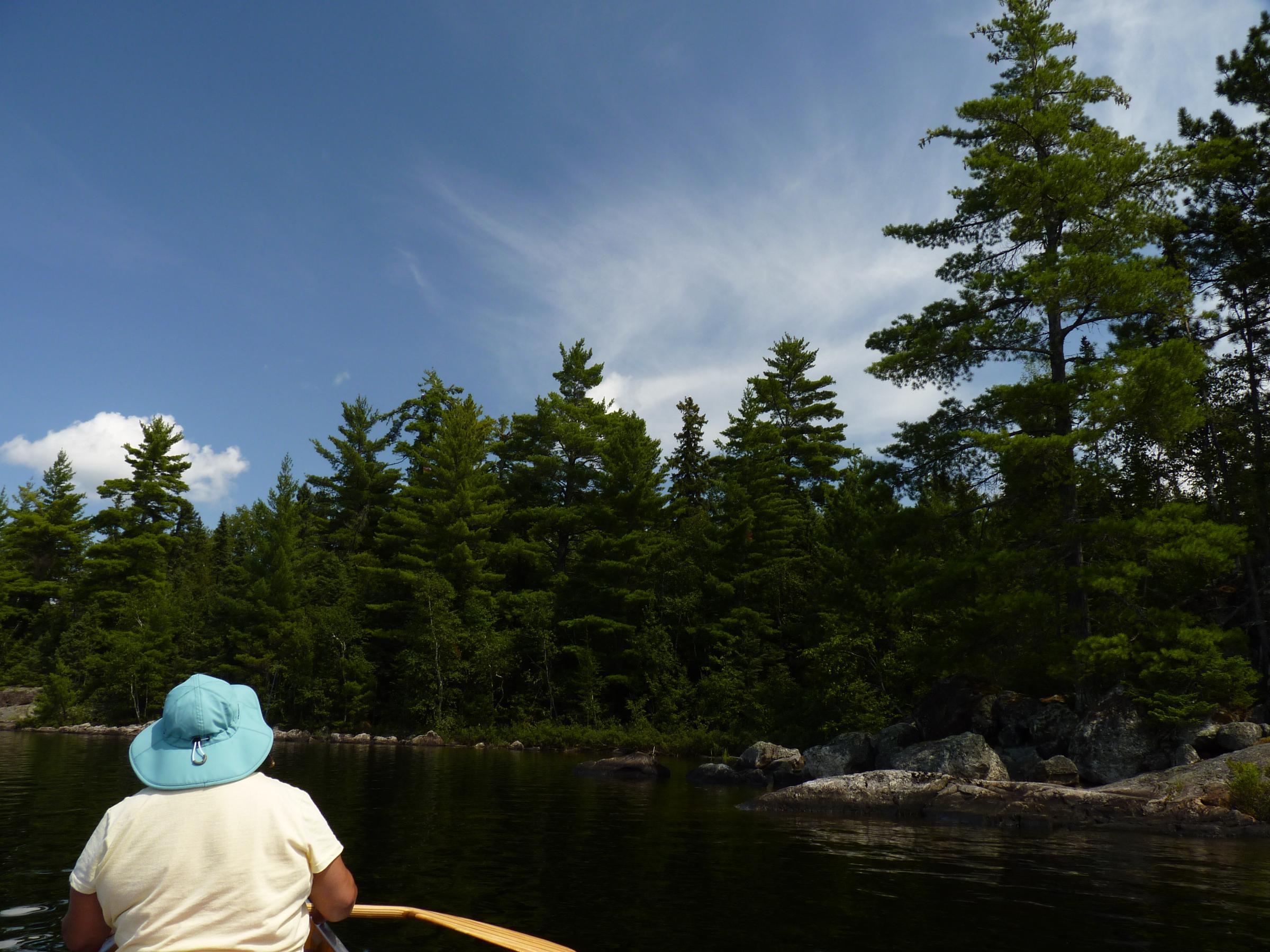 On July 26, we left our Kasakokwog paradise, paddling back toward the McAlpine Creek portage. We encountered some stiff SW winds, but we managed to tuck behind the burned island on Quetico Lake which is just south of the pictographs. We made it safely to the very easy Quetico-Cirrus portage, which is tucked away in a small north bay of Quetico Lake. We paddled a short distance to an island in the south arm of Cirrus Lake, where we made our final base camp. I rate this campsite at 3.5 stars. The landing is poor, but there is plenty of firewood, nice scenery, and just enough flat/sheltered areas for a for a couple tents. 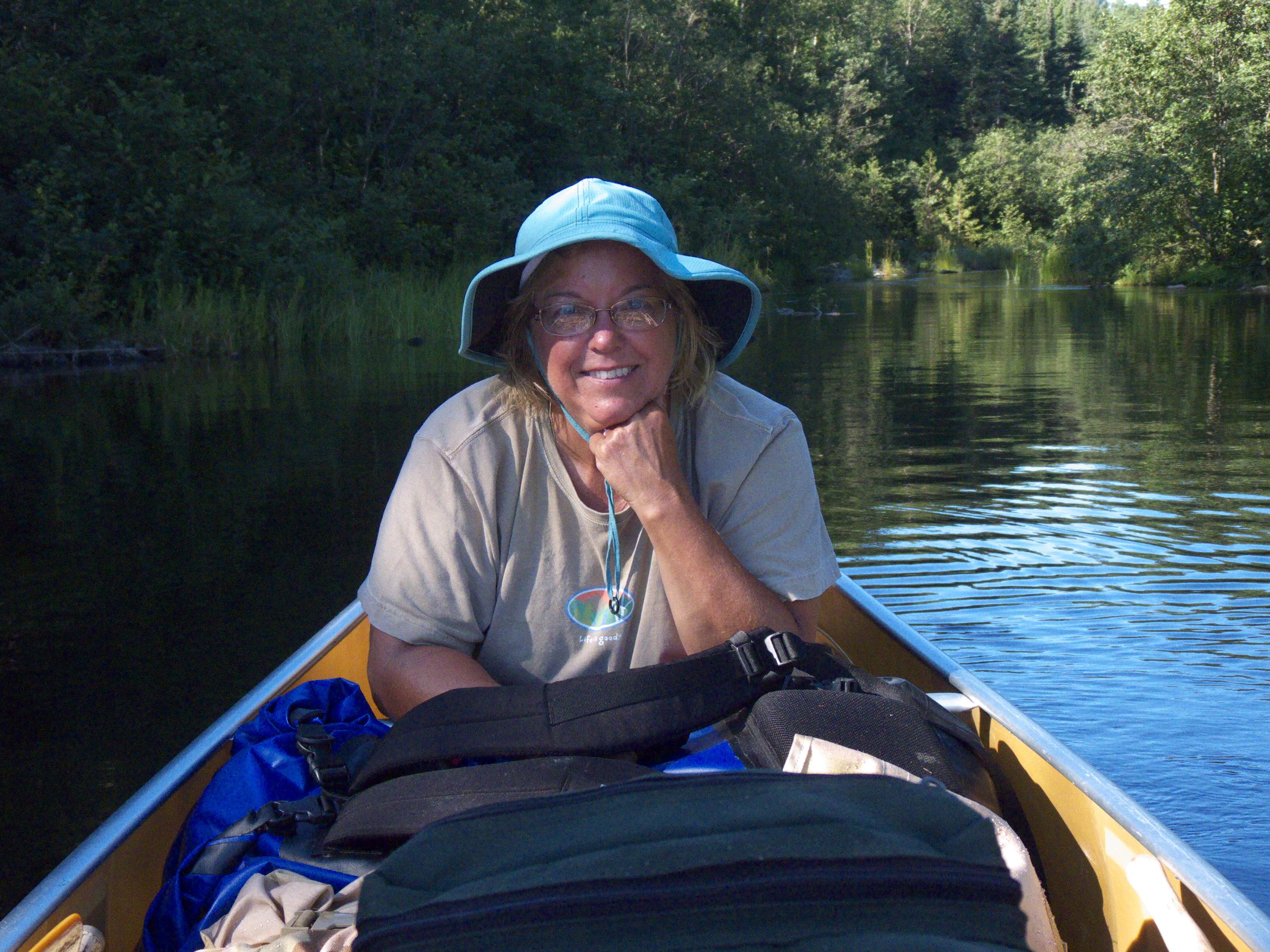 The weather cooperated nicely for our trip...no complaints. We fished morning and late afternoon. Around lunch we lounged around camp and bathed in the lake. We caught enough chunky walleyes the next few days to feed us and the seagulls. The mosquitoes were only bad after dusk, non-existent at early morning, as the cool nights knocked them down. 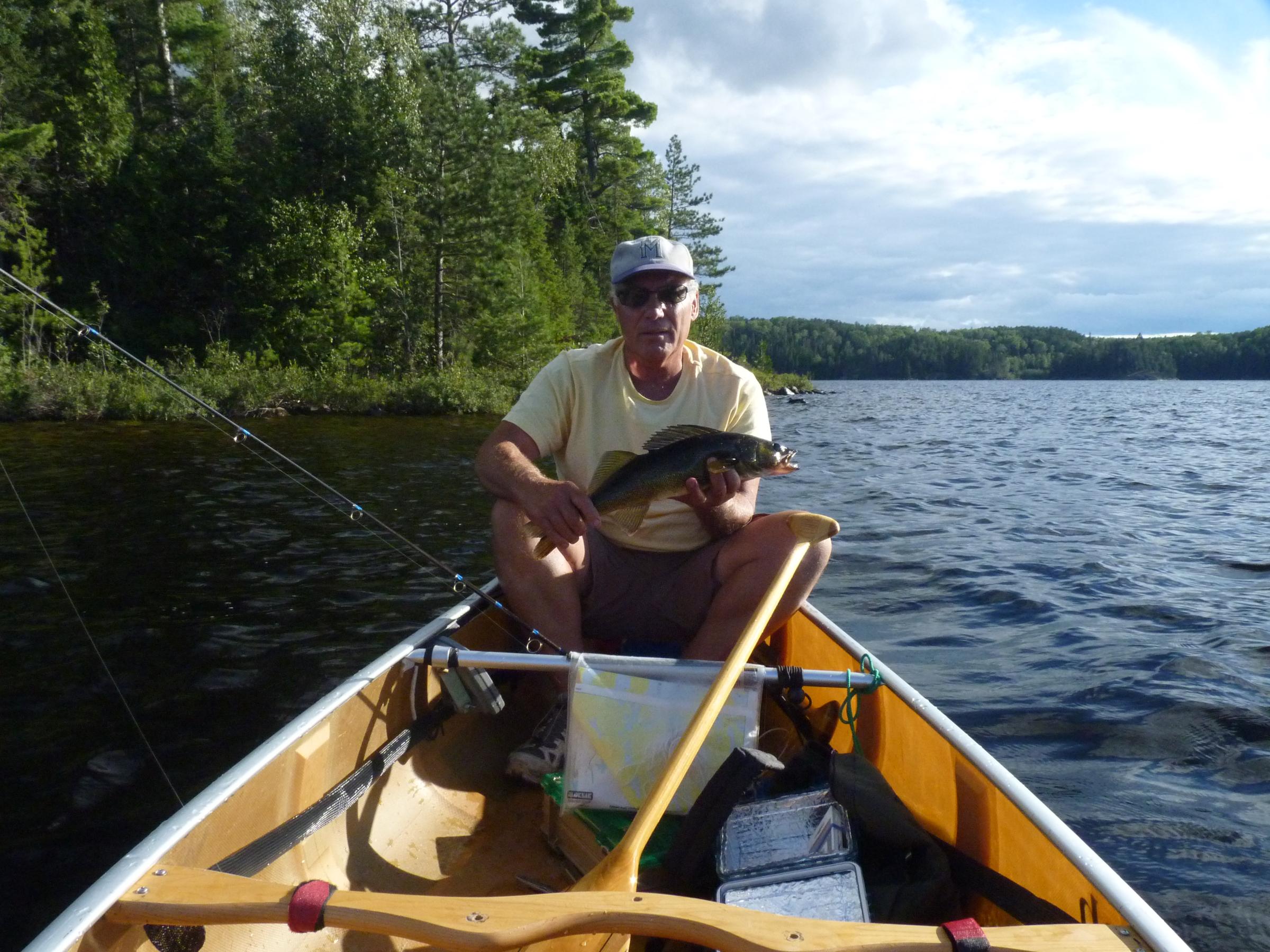 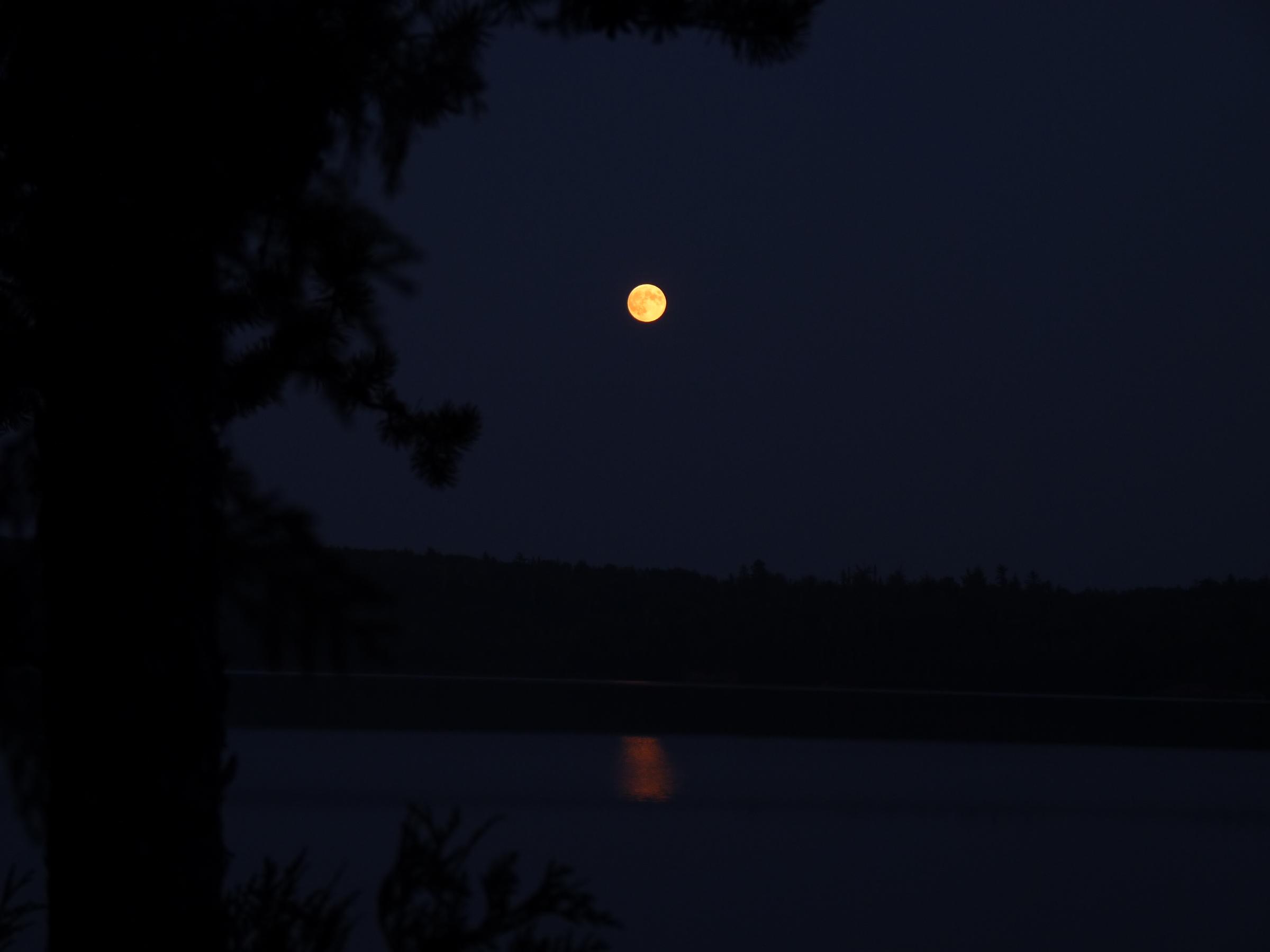 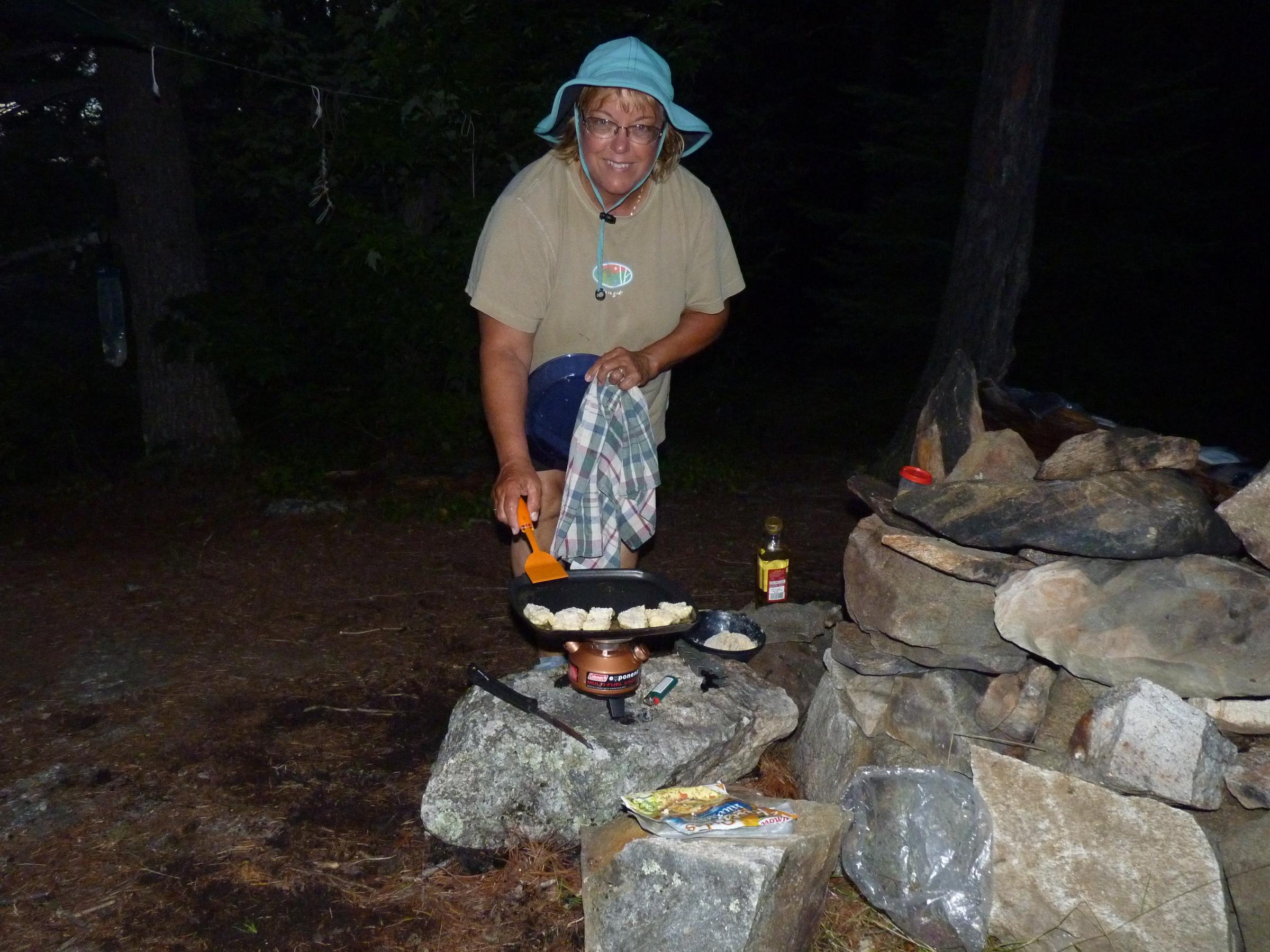 As usual, Carol caught the biggest walleye of the trip. We caught most fish jigging around points and islands, and over reefs, and trolling crank baits. I guess if I had to pick two artificial lures for my survival kit, one would be a 1/4 oz jig with a yellow twister tail. The other would be a gold/black floating Rapala size 11. 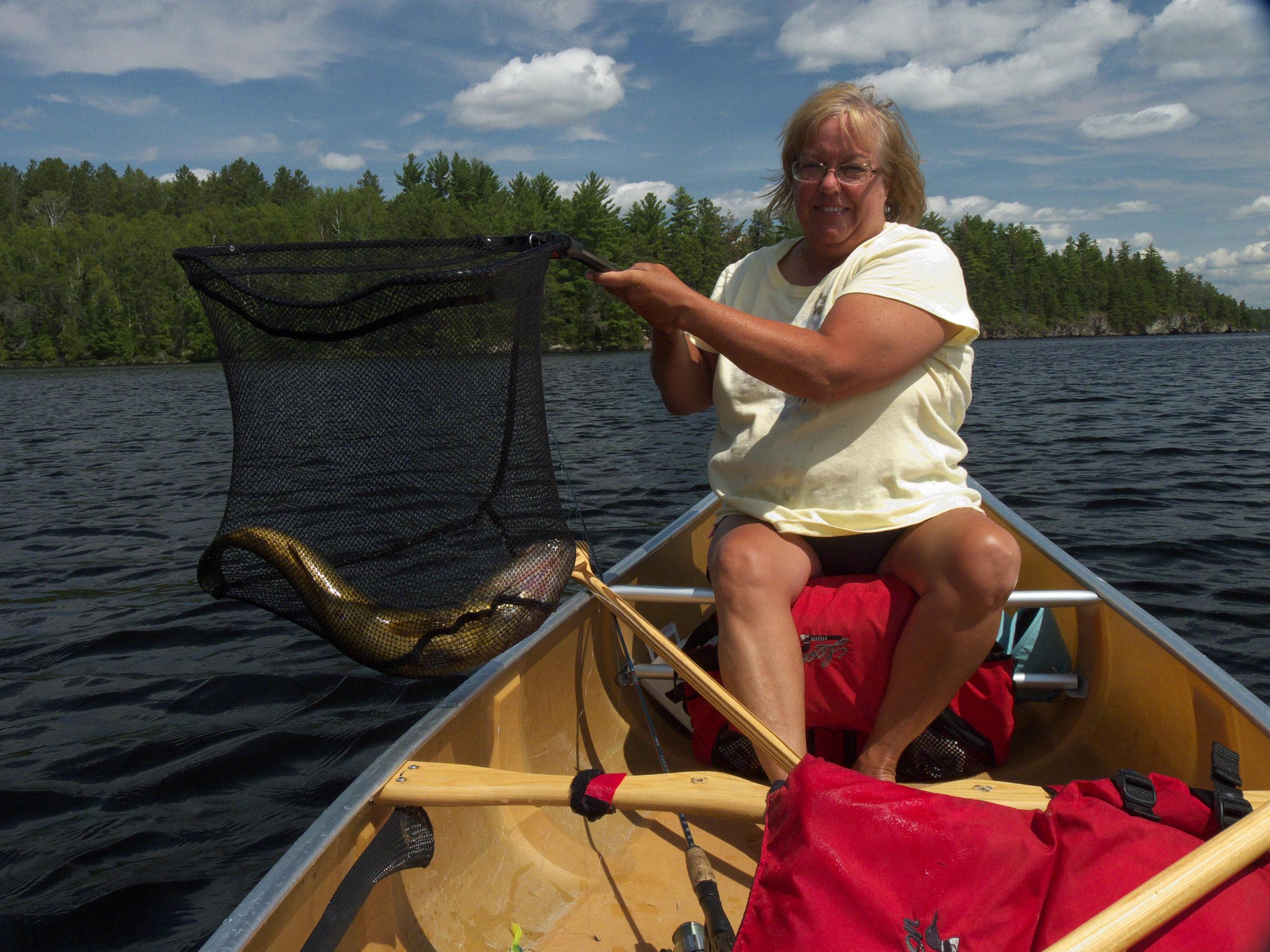 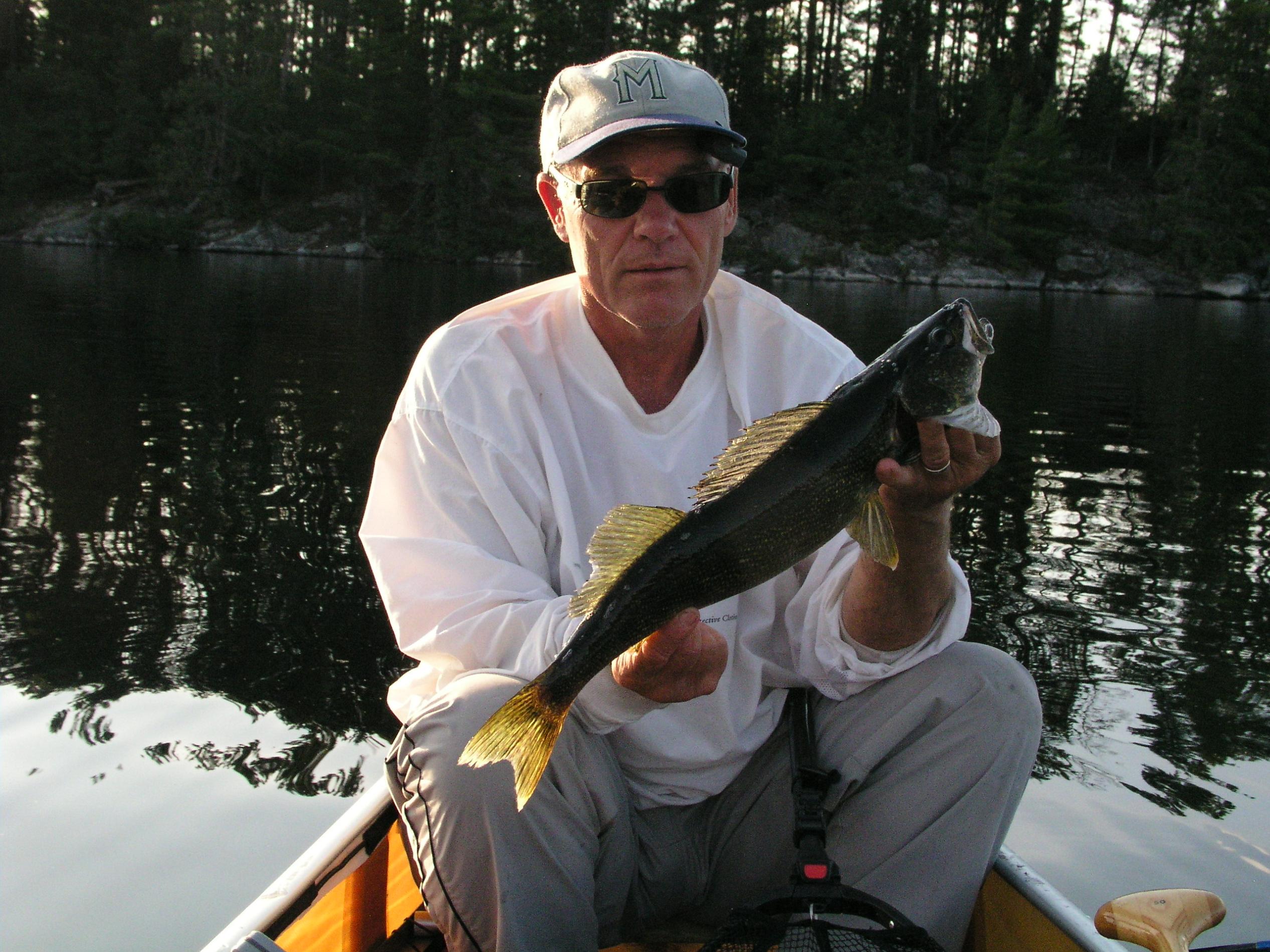 On July 29th, we de-camped and paddled south out of Cirrus Lake. We traversed the western part of Quetico Lake in a couple hours. At the Quetico-Beaverhouse portage, we met a group of 3 men, fellow Wisconsin-ites, that were headed toward Jean Lake for several days. The oldest gentleman...the father, planned to have knee surgery just after his trip. I provided these guys with a few of my favorite curly tail soft plastic baits and bid them good luck.

The trip home was bitter-sweet. It's nice to be back in the comfort of our home, but we are always sad to leave our piece of Quetico-heaven. I've made several trips to Quetico in the last 10 years, but our eagle encounter on Kas ranks as one of our favorites. 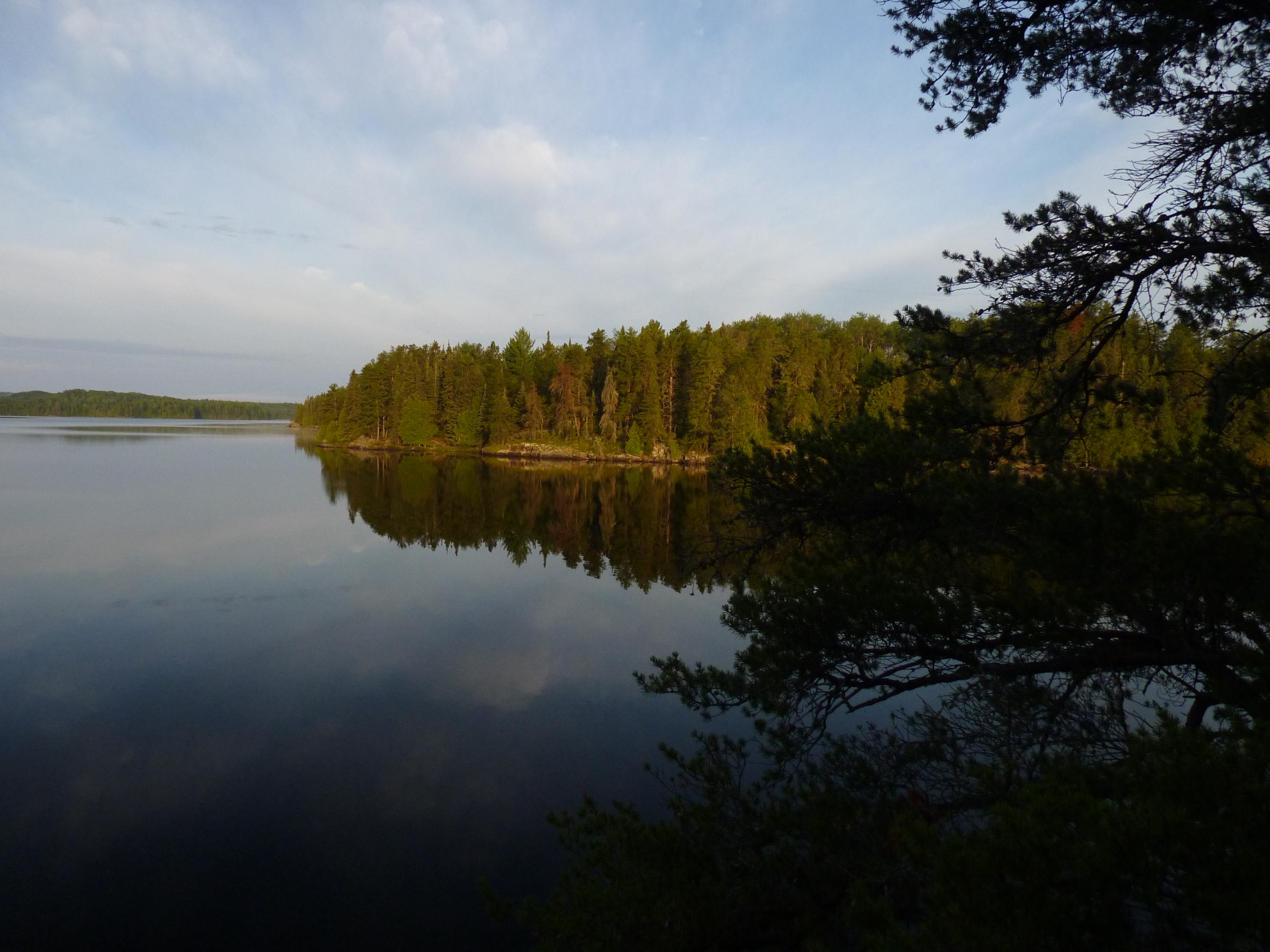