Trip Type: Paddling Canoe
Entry Date: 06/05/2013
Entry & Exit Point: Moose/Portage River (north) (EP 16)
Number of Days: 7
Group Size: 5
Trip Introduction:
Was looking for some good fishing and a new experience. The goal was to catch some Lake Trout and Pike, Go off the path a bit more then usual, do some lake jumping. Camera date is wrong all all pictures.
Discuss Trip: View Discussion Thread (5 messages)
Day 1 of 7
Wednesday, June 05, 2013 Late spring this year, had to reschedule our trip from May 18(still ice on lakes). We woke up in Orr, after a long drive from Green Bay, WI. Go Pack!! Everyone was in good spirit, we had finally had all the backpacks together. Personally, that's the hardest part. We left town at 5:45am, there's always some good vibes blazing down the echo trail. Last year we seen two moose, this year was quiet. It's still a beautiful drive with a fresh cup of coffee and a smoke or two. To give you an idea of our crew, 3 guys(50+,30+,20+) 2 girls(40+,20+). Had 1 first timer! 2 second timers. Our plan: Get to Oyster Lake, set up base camp and fish the day out. I like to keep people moving, cuz I don't believe in soaking myself in bug dope!lol. Some years have been better then others, but the one thing you can always depend on is Skeeters! Pick your camp wisely, some are perfect habitats for them and some are almost free of them. Generally, I like to stay out of the low lands on the map. Those head nets arr not my thing and they kill the visual experience, so my advice to any new people is make sure everyone is scent free before you enter, long sleeves..light clothes. Jeans may be the worst thing you could ever wear, they get heavy and they take forever to dry off. My brother went with cologne on once, from the night before, and he looked like a leper when we got out, I had like 5 bites!hahah.

First portage(160,moderate) always is the worst, but so worth it when you hit that river! Serenity! Although, sometimes it gets a little clogged up with people until you get to Nina Moose. It's a down current ride that is easy for newbies. 2 more small portages will bring you into Nina moose. The previous year we had a moose cross the river right in front of the back of our group. He then proceeded to crash into about 10 feet of wear I was standing on the first small portage and stare at me. I froze, thank god I didn't poop.lol. That would have been a portage problem. lol. Be prepared to jump/maneuver one or two small beaver dams, depending on the water levels. I always speed up and hit um fast, if you can't avoid it, jump out and pull everyone else across, it's never that deep around them. Trust me, your shoes are gonna get wet anyways, so the sooner you get used to that, the better. I don't even try to stay dry anymore, I just bring extra socks. The river runs into Nina Moose and if feels like a whole new world opens up before you. God's Country!!lol. This is what you dream about..well, at least what I dream about!

Nina Moose was mirror like, and was pretty easy to paddle through quickly. It was hard not to throw a line in, but I was pretty intent on fishing Oyster for a couple hours before dark. Then ya follow the lake North into the river again and you'll come to a 70-90 portage, more paddling and then another 70-90 rod portage. Follow the river further north and you'll pass the river to Ramshead lake and you'll wanna start riding the west side of the river when it widens before Agnes and you'll find the short cut to Oyster River. I seen the forums about most people having a hard time with it and although I was a bit intimidated, I told myself it would be an adventure, so I was set on trying it, against the popular vote to take the 160 out of Agnes.

Okay, so heading into the small entrance seems a little impassable at first but truthfully, with a couple of weight shifting moves, it opens up wider and wider. I had 3 in my canoe. You may have to kick off some stuff and I did stand a little to read the river, cuz it's a little maze-like, but you can't get lost, I promise. It's actually kind of fun. I prolly wouldn't do it in the dark though. Keep an eye on the stronger of currents and you'll find your way. Also, upon entering you can see where the river cuts north through the trees. In my opinion way easier and faster then another 160 rod. I would do it again without a doubt. There's a small passable beaver dam within that paddle and right before you get to the portage, you eliminated, there's a decent beaver dam that is impossible to canoe over. It's super shallow(5inches) and "all" will need to walk up. Again, bring an extra pair of shoes and change them at camp.

Oyster river is very cool and very easy at this point. Very deep woods, beautiful canoe ride ends up at the portage. Small waterfalls adorn the last portage into Oyster lake, very pretty. It almost looks like a natural Jacuzzi, loud enough that you can hear it from the lake. Very cool. As I recall, we didn't stay long the skeeters were loving that spot and we were getting hungry. To be fair, it wasn't an extremely exhausting trip, but we were ready to settle. We did cover a fair amount of ground. So, some would say.

Oyster!! A decent sized lake and you can tell it's deep just by looking at it.lol. Thankfully, again, it wasn't extremely windy. There was a day when the waves were getting pretty powerful around the finger tip and it made for some hairy moments. I had chosen the camp that pinches between the lake and the lagoon, but it was already taken. I was actually pretty surprised on the amount of people back there actually. I thought I'd be there by myself?? So we camped up on the finger tip on the inside of the lagoon, Which BTW, was horrible camp fishing at that time. I will say the camp itself was pretty nice though and we had a loon on a nest right next to us.

Camp was set up and we scrambled out to fish. I "heard" there was a couple decent sized Pike, and I was looking for an easy meal. I Tried some shoreline casting but wasn't picking them up like I thought I would. Eventually, I gave in to long lining and eventually caught me a decent 28 inch Trout and another one soon after. First one ever!!Really unexpected. The secret lure..KO style wobbler(firetiger, glow in dark). Your welcome, that was the only spoon out of our group that worked aside an orange syclops, which was a sparse 2nd place! If the rod tip was still bobbing it seemed to be working. Then it was just a matter of leisurely paddling around the lake. BTW, I caught those two in the lagoon area by the portage to rocky??lol. Never did pick up any pike. Deep fried um'! Water was still pretty cold, maybe that's why they were a hell of a lot better then anyone gives them credit for. loved it! No spawn No sperm at this time. 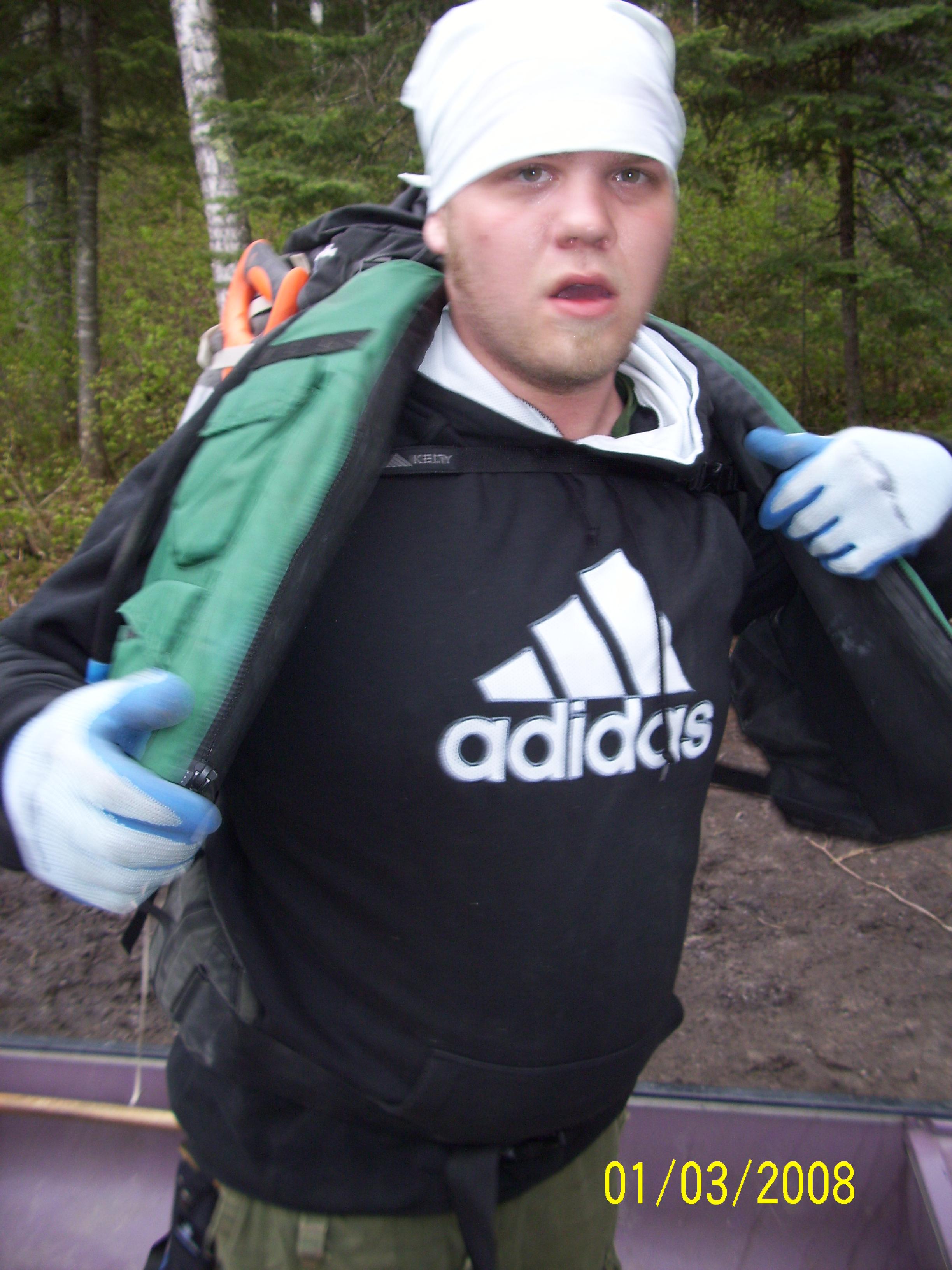 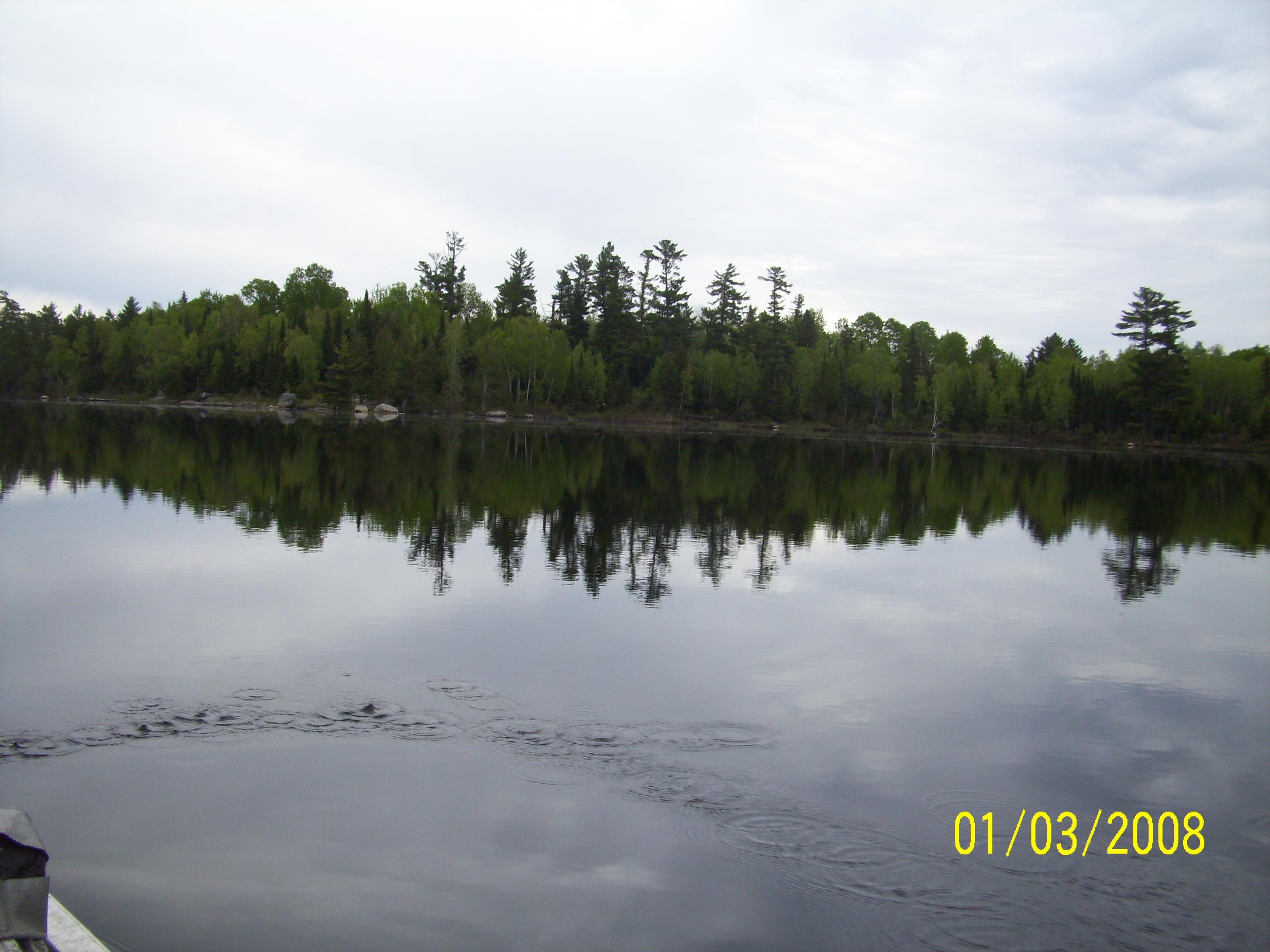 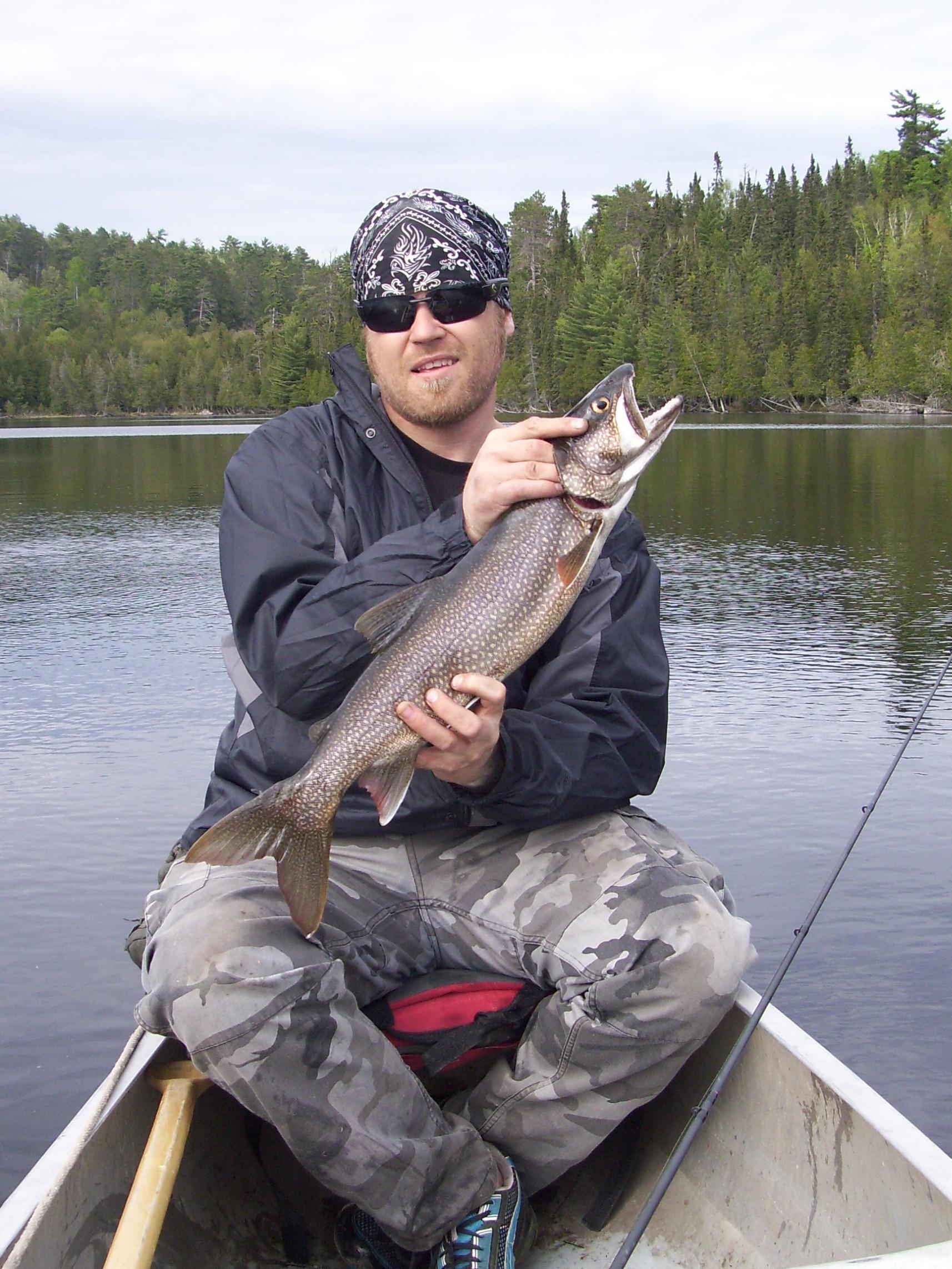