Soloing, with help, up the Stuart River
by VoyageurNorth

Trip Type: Paddling Canoe
Entry Date: 09/11/2013
Entry & Exit Point: Stuart River (EP 19)
Number of Days: 4
Group Size: 1
Trip Introduction:
Soloing Stuart River area
Discuss Trip: View Discussion Thread (6 messages)
Report
Since last year I had decided that I wanted to take my next solo trip up into the Stuart River area. I had done some research on the PMA (Primitive Maintenance Area) at White Feather, a small lake halfway up to Stuart Lake. The day before my trip I went up to the Kawishiwi Ranger Station and had my special permit issued for 3 nights in the PMA. These kind of permits can only be issued by a Ranger Station and only one permit is issued a day for the PMA, allowing just one night there per permit day.

The first portage for Stuart #19 is two miles long. I was lucky because John enlisted one of our employees, Charlie,to not only drive me up to the entry point but also to help carry some gear so I could make this first portage in one trip.

As usual, the day before I worked late and didn’t get to bed until 6:00 am on the day of the trip, so I was going to be tired the first day. I arrived at VNO and we left around 9:30 am & we finished the first portage in by 11:15. Charlie turned back & I got in the canoe and took off.

The wind was coming from the NNW,just about right in my face, but wasn’t too bad. About a half mile down the river, I did a fairly easy 85 rod portage. About 1.5 – 2 miles further down, the Jerry Creek meets the Stuart, coming in from the west. It was here that I had a good sized beaver dam to cross. I was just about over, pulling the canoe down to the river again when I found that the mucky land my right foot had been standing on broke apart, leaving me with my right leg in mud up to my knee and my butt in the mud as well. It took some effort to get my foot out without losing my shoe, but besides for being covered with mud from mid thigh down, I was fine.

The west entrance to White Feather was virtually hidden by the tons of wild rice growing there and I almost missed spotting the entrance. At 1:15 pm, when I got to the campsite on the north side of the lake, the bottom of my canoe was halfway covered with the wild rice kernels. The first thing I did when I got to the campsite was walk down into the water and rinse off my shoes and pants. Once I had the clothesline up, wet things hung to dry and changed into clean shorts, I set up the rest of camp. The light breeze and 75 degree temperatures had my wet stuff dry in no time. 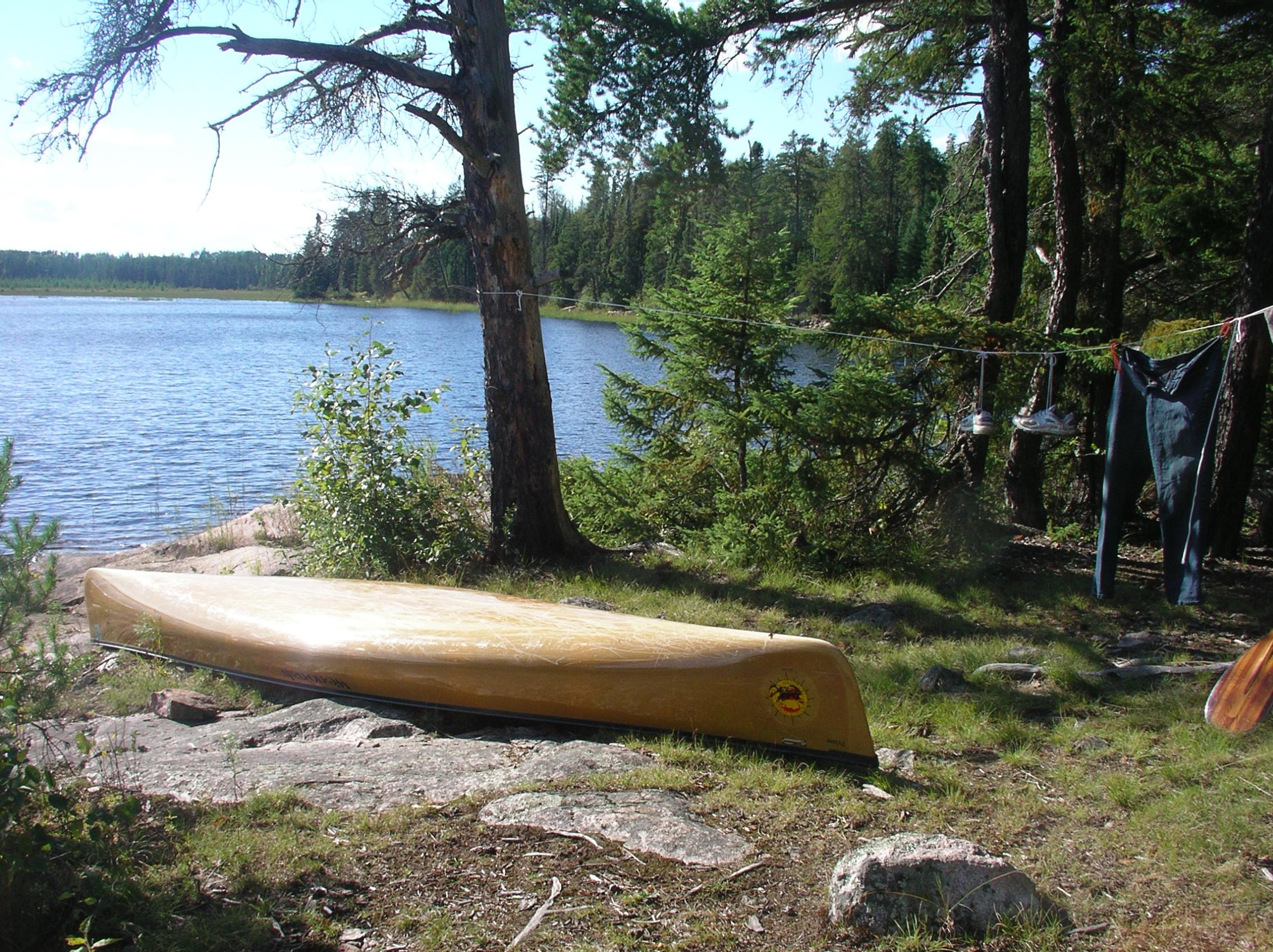 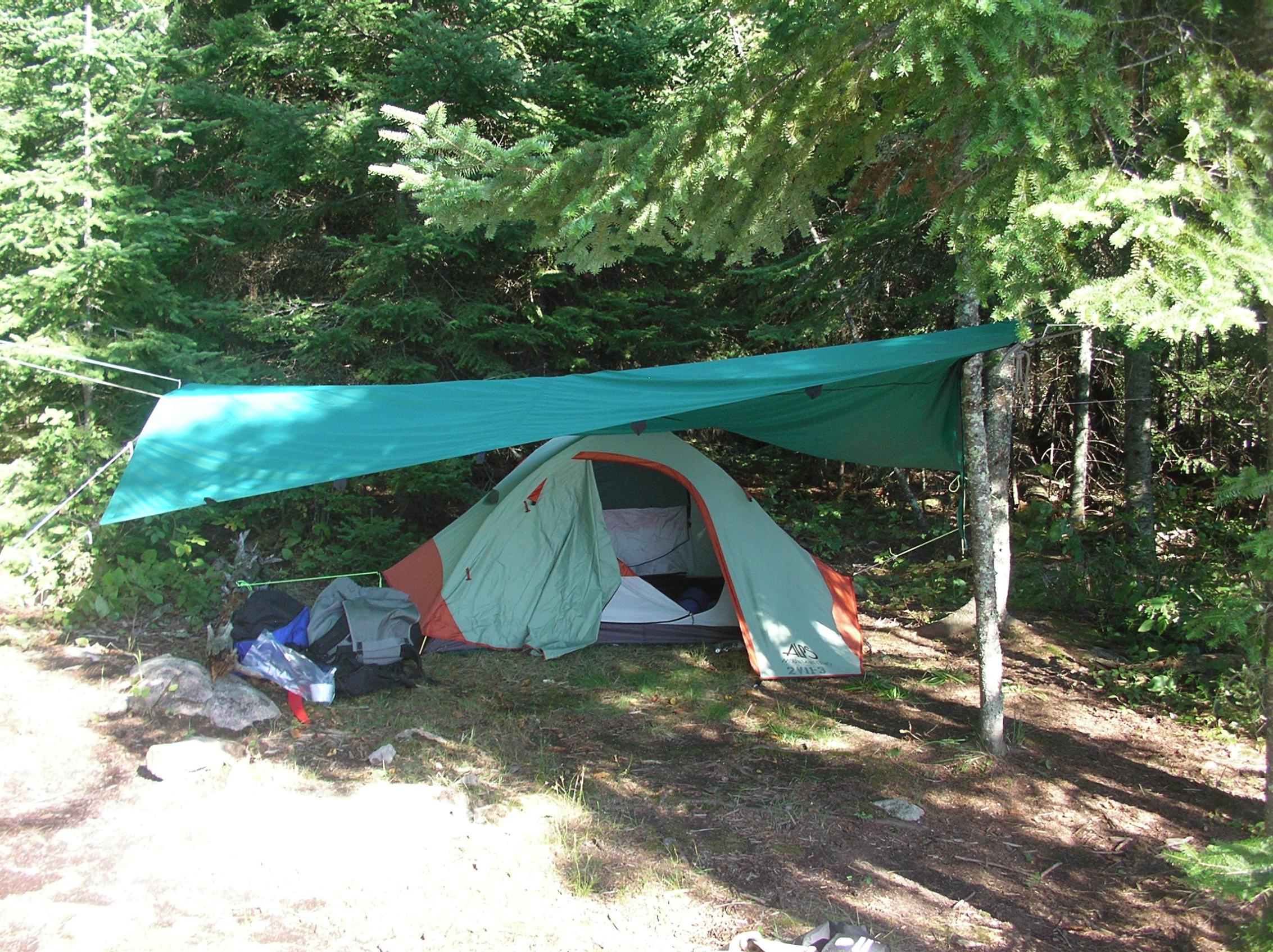 I explored a lot of the area in back of the campsite looking for firewood. I had no problem finding any since not many people camp on White Feather. I gathered wood for about an hour so I would have plenty for the four days and then spent about 2 hours cutting it all up. It was almost 4 pm but warm and sunny out so I relaxed on one of the flat rocks near the shoreline, watching the Canadian geese coming in to land on the lake, hearing them way before I could even spot them.

When the sun began to set, I thought it was time to have dinner. As with most of my solo trips, I had brought lots of tortillas, sliced lunch meats and various cheeses to have for most of my meals. Going solo I don’t feel the need for the social part of making and eating dinner with the group, so I go very simple & easy. However since I planned on staying on White Feather all three nights, I had bought a couple frozen chicken breasts,4 red bell peppers and some onions. I browned half the chicken, added the onion, pepper and some garlic powder and when done, I layered it in a couple tortillas. 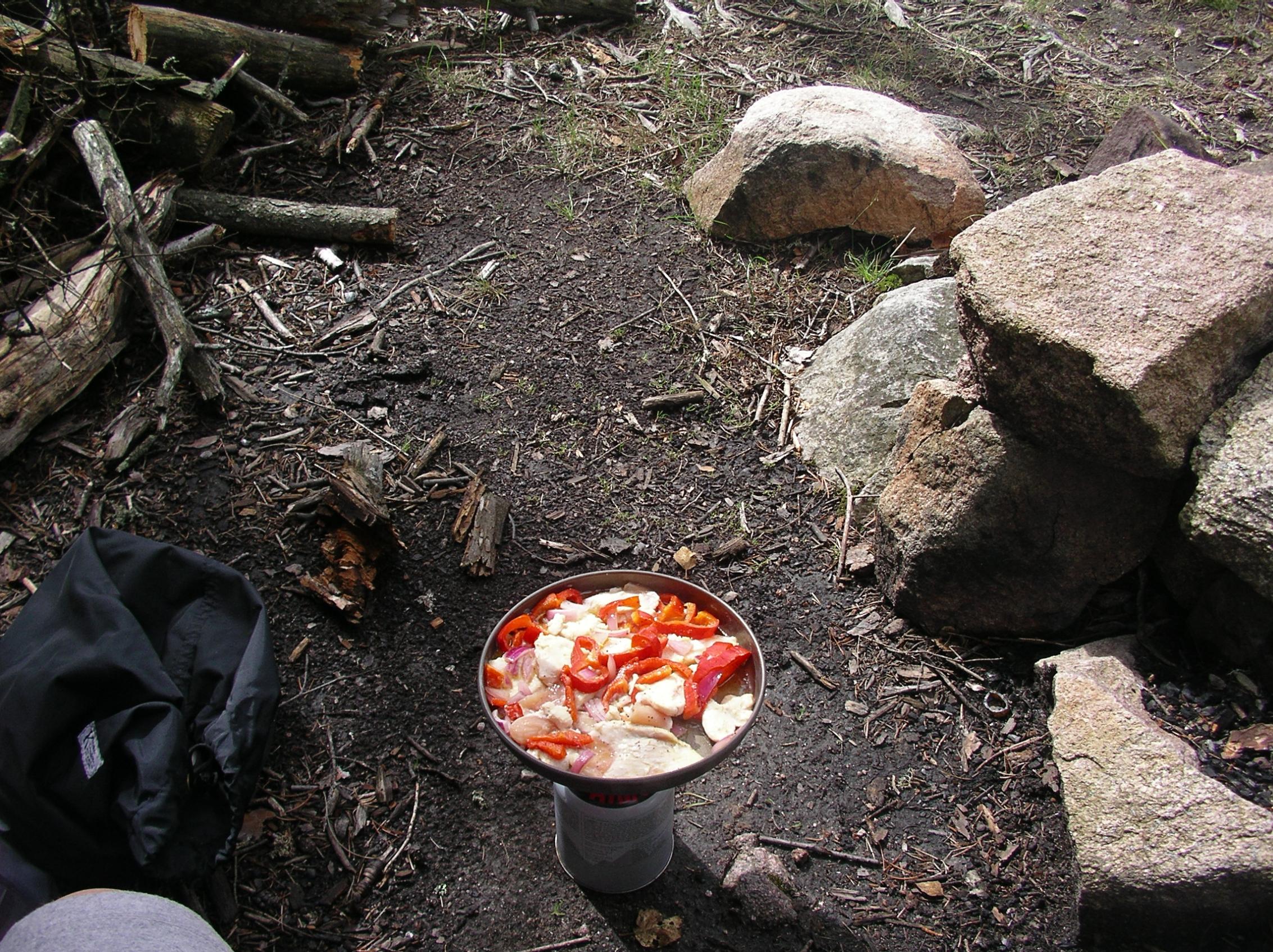 After I ate, I found a tree to throw a rope across so I could hang the small pack with the food. I started a small fire and sat in my Thermarest chair for quite some time, listening to all the evening sounds. I found myself nodding off in my comfy chair. It was around 9 pm, time for bed.

I woke up around 4 am to a hard downpour and to see that the extra tarp I had over the tent was drooping on one side, collecting a bunch of water. The tarp looked tight when I put it up but some of the parachute cord had stretched with the rain. I got out of the tent and with my headlamp on, was able to do a makeshift fix that would hold until I got up later and did a better job.

I woke up again around 9 am. I had gotten almost 10 hours of sleep, making up for some of the missing sleep from the day before! I put together some cheese/meat wraps, made myself a cup of instant Folgers coffee and sat out on the ledge rock, basking in the sun. This actually kept me occupied for about 2 hours! I have no idea what I thought about for 2 hours, but it was a glorious relaxing morning. 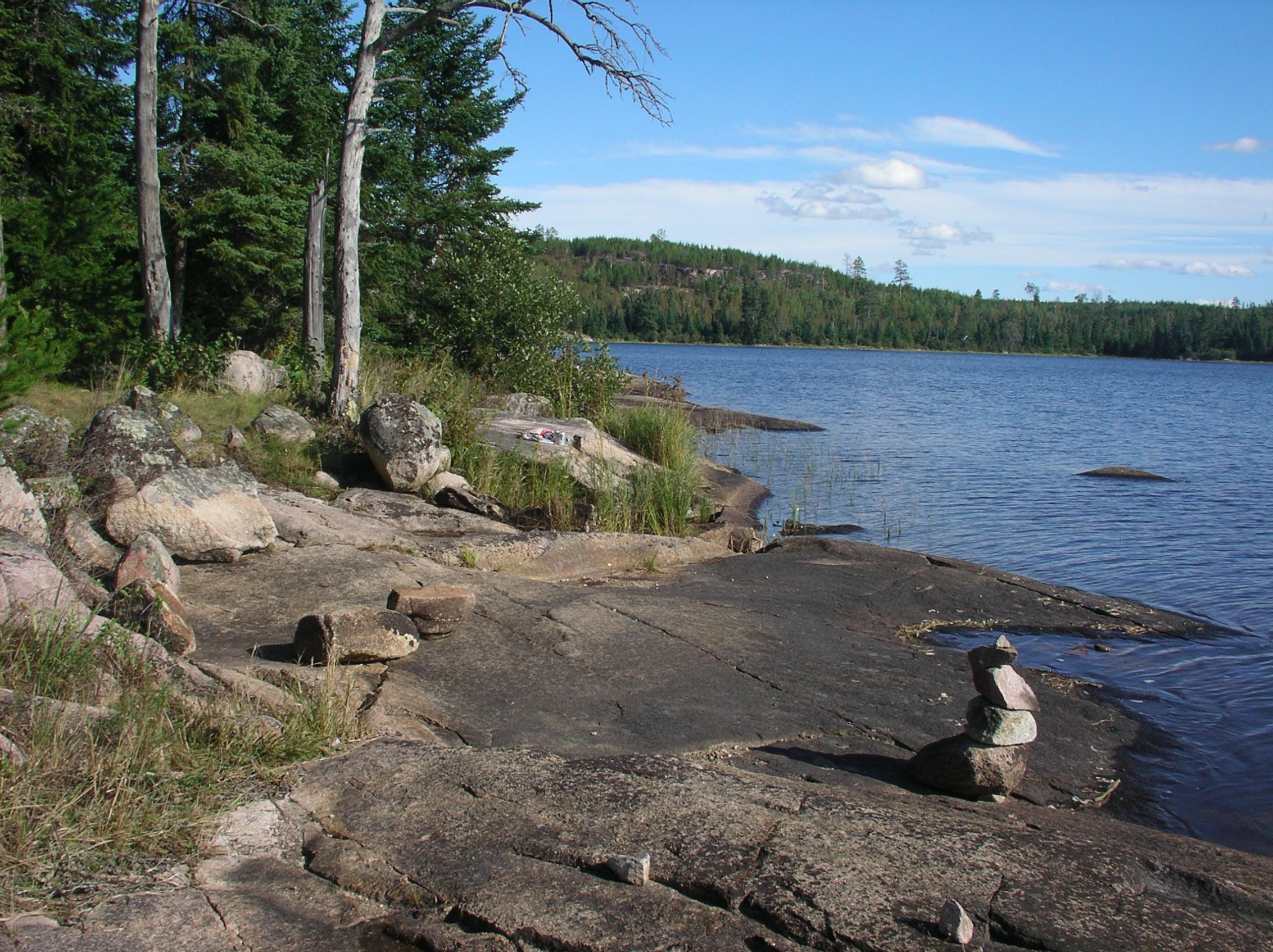 I set up my fishing rod with a bobber and a crawler and did some shoreline fishing. I wasn’t real serious about fishing that morning and had plans on keeping an eye on the bobber while reading one of the William Kent Krueger books I had brought along. This one was called “Purgatory Ridge” and is one of a series of books whose main character is Cork O’Connor who lives near the Boundary Waters. The first half of the book and the fishing got me through the next 4 hours. By then it was almost 3 pm, just enough time to take a short paddle to explore the lake.

I found that much of the lake has wild rice in the bays which is probably one of the reasons I saw & heard so many geese. 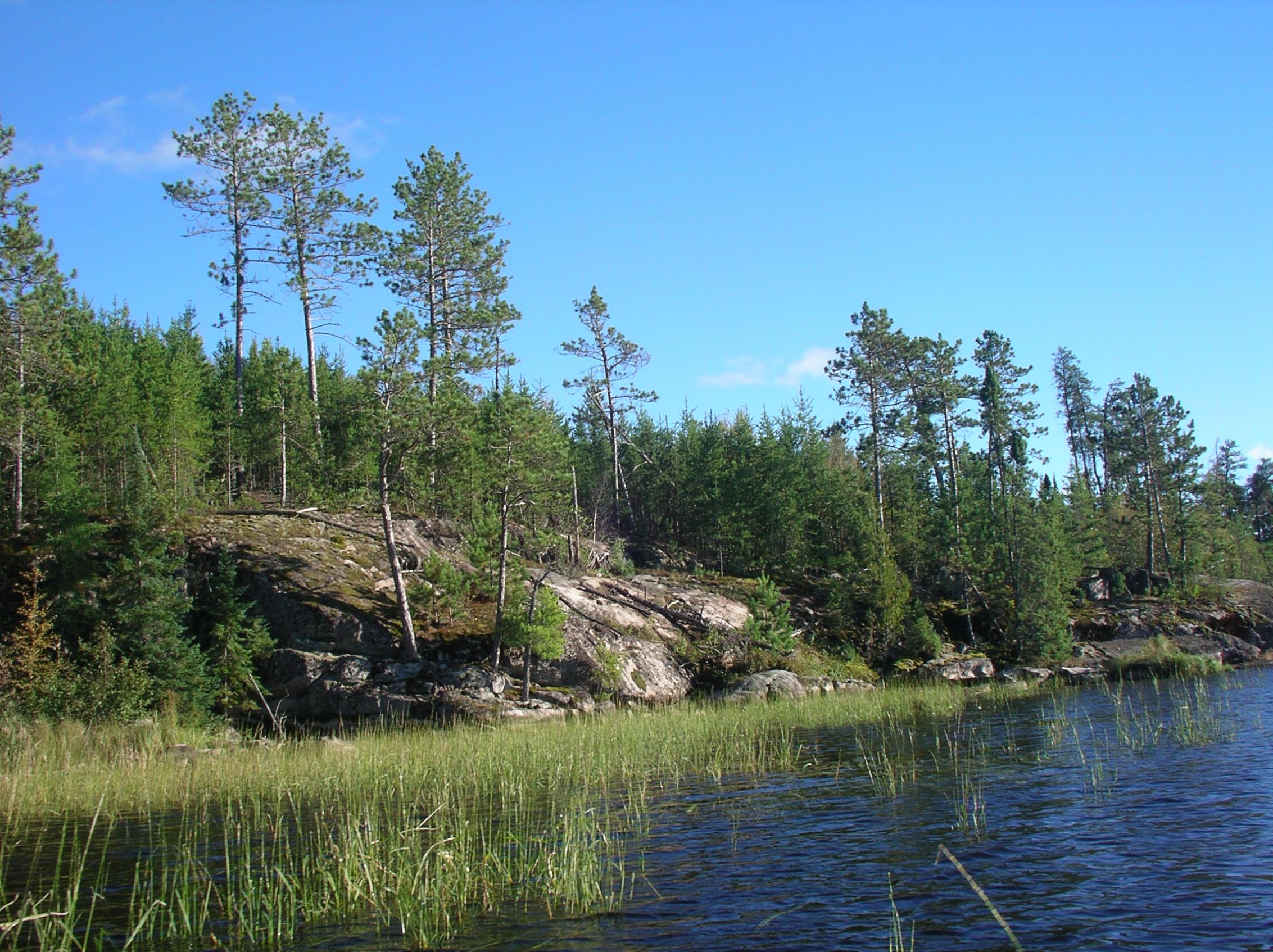 I’m sure the other reason is because most of the time the geese are the only ones on the lake. Most of the land around the lake is low except for the northeastern side which has a small ridge. When I had paddled almost the whole circumference of the lake, in the distance I heard the geese making their way back to the lake. I was right in the spot they usually landed so I made a quick turn to make my way back to my campsite.

That night as I repeated the chicken & veggie wrap dinner, I watched the geese come in and even just a few mallards showed up. Again I made a small fire, listening to the music of the wilderness and enjoying that this was my “private” lake for the four days. 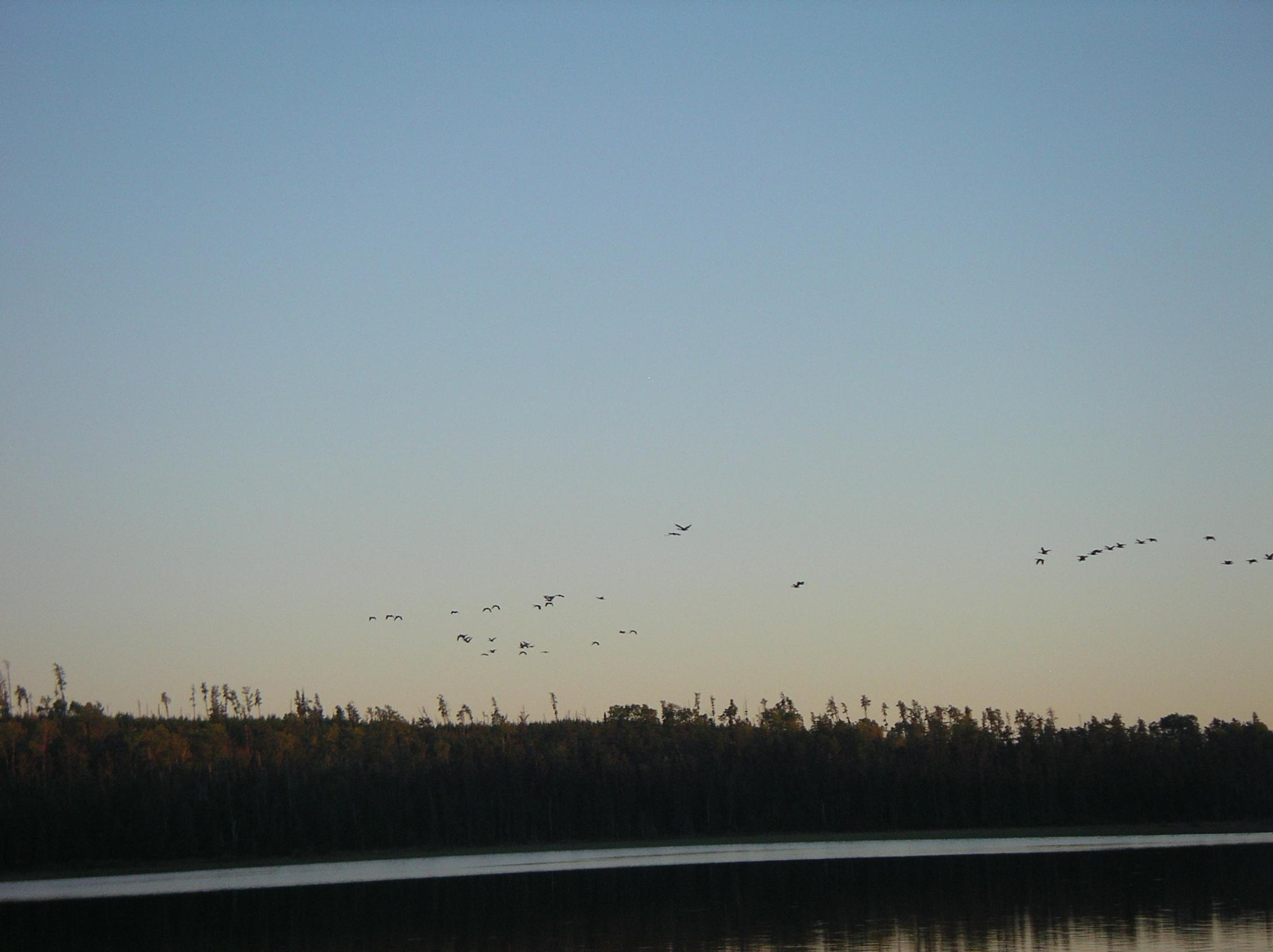 The third day was pretty much a repeat of the second day except that some heavy clouds showed up and threatened rain. So instead of going up to explore the river north, I went out to find some more firewood. I didn’t need it for myself, but gathering it and cutting it up gave me something a little more physical to do and if it began to rain, I’d be able to scoot in the tent. It would also leave some wood for the next campers. For a couple hours, I did some exploring of the woods in back of camp, hiking some of the many trails that wound around in back of my site.

Later that afternoon I got out the book, sat on the ledge for the next 3 hours and finished reading it to the end. What to do then, hmm? Another meat/cheese wrap dinner with some hot tea, another small fire and then I listened to my iPod which had another Krueger book, this time an audiobook,called “Boundary Waters”. I ended up bringing the iPod into my tent because I wanted to finish the book but I was afraid of falling asleep before it ended. That is exactly what I did do, but at least I was in the tent when I fell asleep. 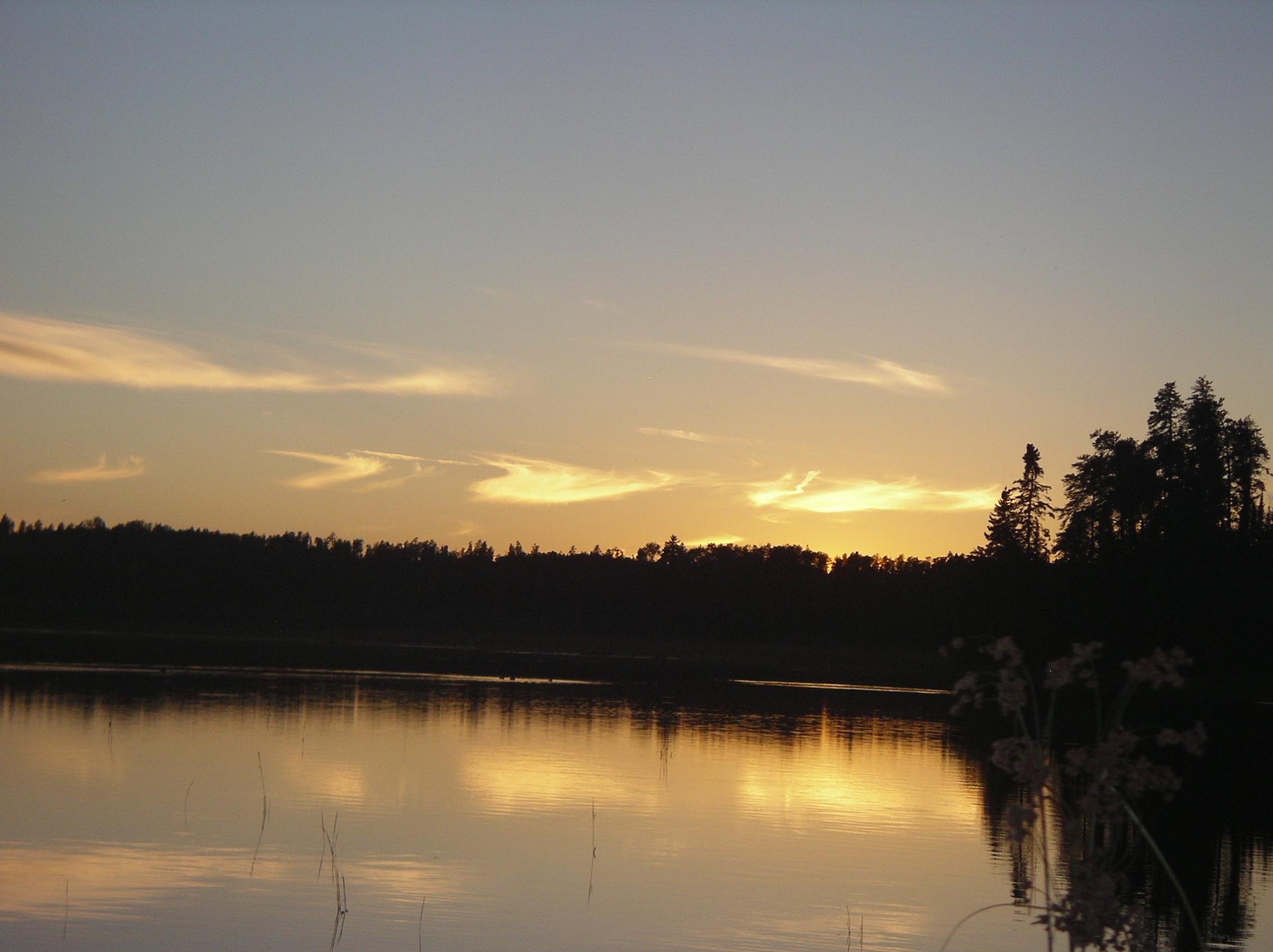 On the last morning I got up around 8:00 am, packed up quite a bit of my camp before making my breakfast; wraps and coffee. I was going to meet Charlie at the northern side of the two mile portage so I knew I didn’t have to leave camp until about 10 am. So of course, I took my wrap, coffee and sat on my ledge for a last good long look at “my” lake.

Then I packed up the canoe & made my way back. The beaver dam was easier this time since I knew what to expect and the 85 rod portage even seemed shorter. I got to the north side of the long portage by 1 pm and Charlie wasn’t supposed to meet me until 2 pm! The day was a little windy but gorgeous again so I put on my gear pack, day pack, grabbed my paddle & fishing rod and took off down the portage. I stopped about a half mile down and went back to grab the canoe. I planned on alternating carrying the gear and the canoe until I spotted Charlie.

It was almost 2:30 when I heard a shotgun go off and heard a “Hullo there!” Not from Charlie but from one of our other employees, Nick. He decided to be the one to meet me and also do some grouse hunting along the way. He grabbed one of the packs and the canoe and I carried the rest plus the bird he had just shot. I was quite happy to carry the bird instead of the canoe.

We made good time back to the parking lot, climbed into the van where Nick had some cold Pepsi waiting for me. Off we went, back to Ely and back to VNO, home & a hot shower.