I slept like a log for about 10 hours. My digital thermometer (of which I am somewhat suspicious) recorded an outside low temp of -15°F / -26C. I was using my new Downmat 7, and it worked pretty well though I could feel a bit of a cold spot around the small of my back. I did not use a closed cell pad with it, but think that would be best for next trip. On top of that was my Marmot Pinnacle which is a +15°F bag, topped by my old but faithful NorthFace Superlight, another +15°F bag that after many years has lost some of its loft. I love that old bag. My parents got it for me just before I went to Philmont back in 1976! In the 1980s at Many Point a wondering spark burned a hole a bit smaller than a dime, and the circle of duck tape I used as a temporary field repair is still on there today and going strong. I’ll fix it if it starts to give out. This bag has plenty of nights camping left in it.

I made breakfast slowly while I enjoyed my big pot of coffee. I brought a small cooler as much to sit on as to protect some foods from the cold, and it was doing better in the former capacity. The 6 eggs I brought were cold, and 2 of them spun easily (trick to tell raw from hard boiled eggs, or frozen ones for that matter). Knowing they would freeze, I scrambled up the 4 good ones along with a pile of bacon and some toasted english muffins. It was a right solid breakfast. 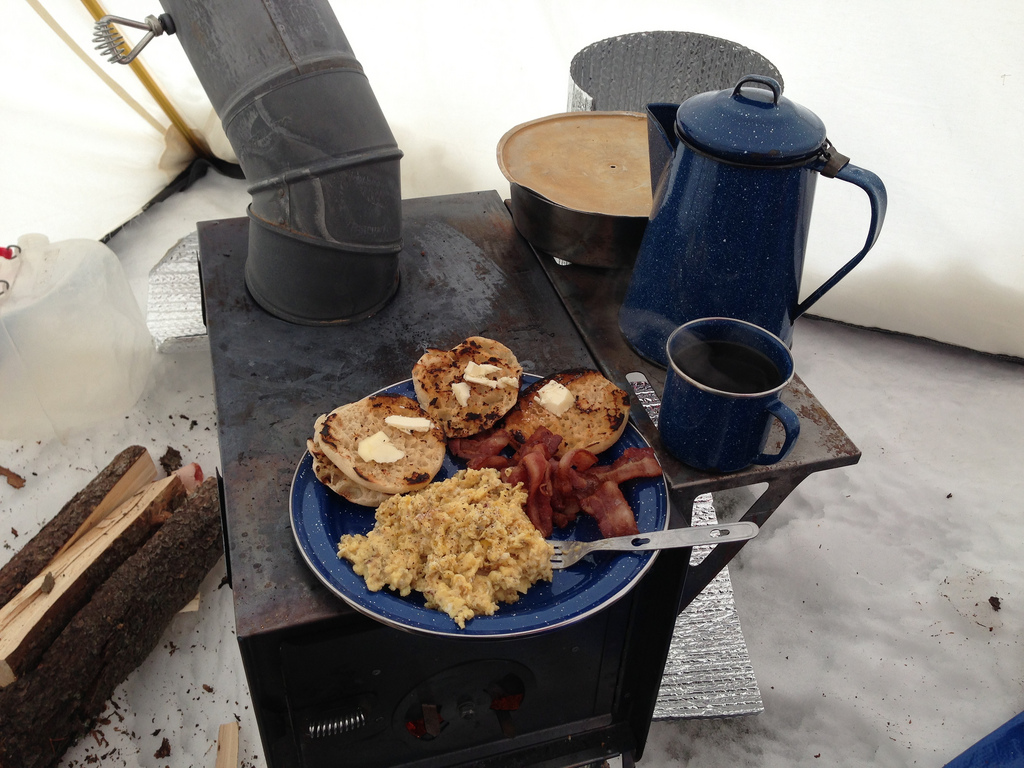 Outside was cloudy and snowing, and the wind had shifted from the south east. Smoke was still being carried away from my tent, but the stove pipe did catch the wind and blow smoke in through the stove from time to time. I took half of the heavy aluminum turkey pan I had cut for a heat shield under my stove and fashioned a wind break for the end of my stove pipe that actually worked pretty well. 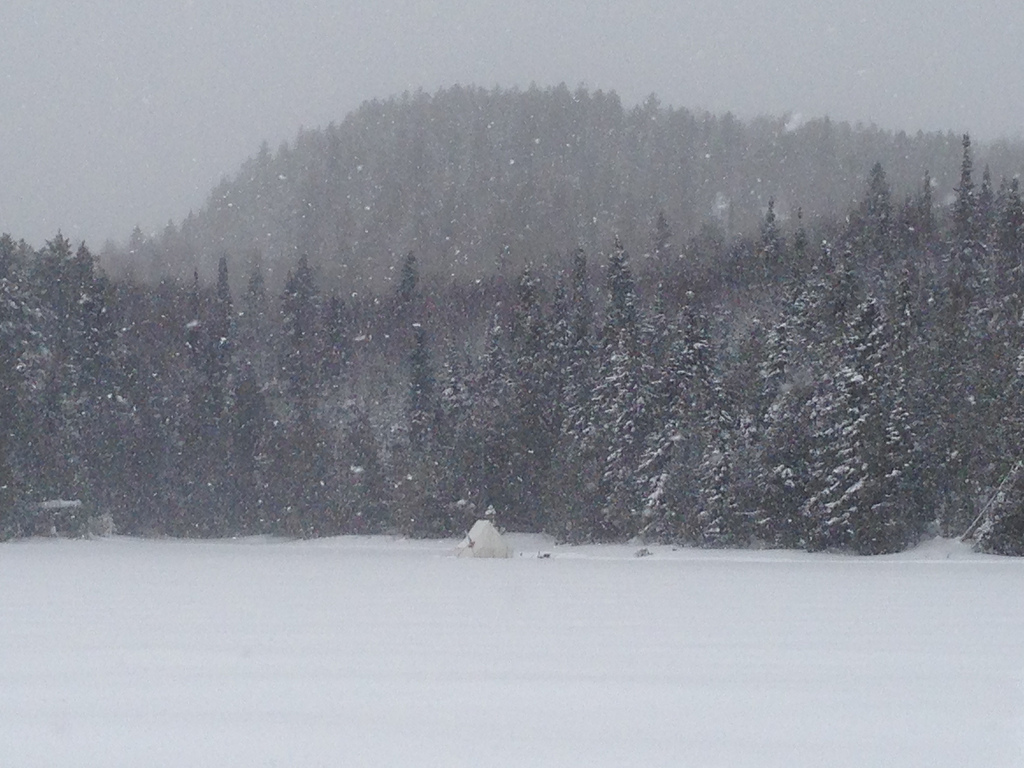 More wood was gathered and cut so there would be plenty in the evening. While cutting I saw a large group of daytrippers crossing the lake on their way toward Eagle Mountain. I also finally saw members of the other group camping on the lake who were also out scavenging for firewood.

Around 11am I set out on my snowshoes to explore. The real trail (on shore) on the south side of the lake was in terrible shape, but I pushed through on my snowshoes. My snowshoes are the old style Ojibwa’s that I got from the old Country Ways store years ago as a kit. I tied the webbing and varnished myself, and I like them very much.

I circled the lake and went to the where the trail split - one side going up the mountain and one heading toward Brule Lake. It was dark and snowy so I chose to explore rather than climb that day. Unfortunately the Brule Lake trail had been lost to snow. I could only follow it about 50 yards away from the lake before it just vanished. I circled back around the lake and back toward my camp. I though I would try bushwacking through a small swampy area to see if I could reach another small lake next to Whale, but deep snow and dense alder kept that plan from working out. Plan C, I’ll try ice fishing.

According to my Furtman book, Whale Lake has perch and northerns. Now while I am very comfortable and confident with a fly rod in my hand, I am a rank amateur on the ice. Still, I had hoped to snag a northern to enhance my dinner plans and had studied (but not tried) filleting them. No luck. I tried 3 holes, each progressively further out, and did not find a spot much more than 7 or so feet deep. Maybe there are actually no fish in that lake. Maybe it was my lack of skill. It might well have been both.

Back to camp, and around 5:30 it was time again to head inside and light up the stove. Layers were hung to dry, and at one point my thermometer said the inside temp near the top of the tent hit 85°F / 29°C. The wind had again changed, and was blowing from the north so I turned my improvised screen and all was well. Dinner was Chicken Vindaloo with grilled tortillas standing in for fresh nan. Northern Pike Vindaloo would have been a better story, but whatever. 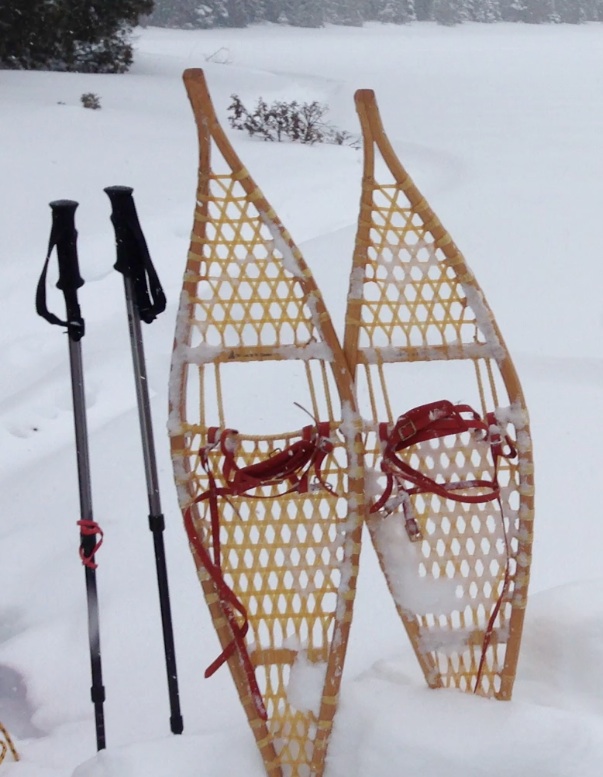 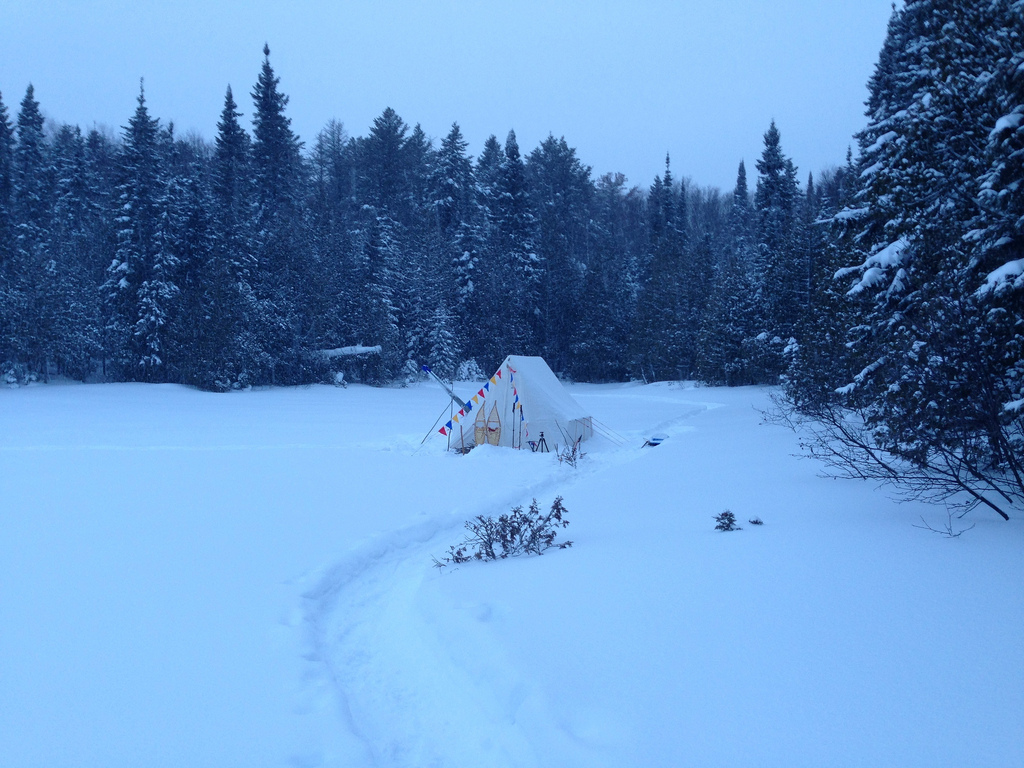