Caribou on Ice
by McVacek

Trip Type: Snowshoeing
Entry Date: 12/29/2013
Entry & Exit Point: Other
Number of Days: 5
Group Size: 2
Trip Introduction:
We invited a lot of people to join us for a New Years camping trip in Woodland Caribou Provincial Park with the hope that more bodies in the tent would result in more body heat. Everybody thought we were nuts. So, it was just the two of us travelling to Red Lake, Ontario for 5 days and 4 nights of solitude. Even our dog decided to avoid the -40 temperatures and the 2 hour snowmobile ride into the park.
Discuss Trip: View Discussion Thread (5 messages)
Report
Day 1-December 29, 2013

After a good night’s rest at the Super 8 in Red Lake, we had breakfast with Harlan and Matt of Red Lake Outfitters as we waited for the sun to come up. We finally started loading up the snowmobiles about 8 am. It was -35 and no other snowmobiles were out and about in Red Lake. It wasn’t hard to stay warm strapping all of our gear onto the sleds. It got a little chillier using bare hands to get the snowmobile helmets on.

Harlan and Matt took our pictures to commemorate the first winter trip they had outfitted into the park.  From there we were off on a snowmobile ride across Red Lake. It was interesting to see the lake from a different perspective as we have flown over the lake on our summer canoe trips. We had some trouble keeping our face shields from frosting up. We managed to only hit slush one time during our trip to Douglas Lake.

We picked out a camping spot on the Southwest end of Douglas Lake, just below the inlet. We went to work prepping our tent pad and waved goodbye to Harlan and Matt. They left us about 11 am. We had the tent set up in less than 1 hour and then got started gathering firewood. We cut firewood until dark and had plenty to keep us warm through the night. The nice thing about Woodland Caribou is that you can cut down standing, dead trees. Which means the wood is nice and dry! Splitting wood was easy because it was -30. We brought a hammer to the backside of our ax to split the wood. It made the splitting more precise and reduced the risk for injury.

Because it was so cold, we decided to use the center stove jack in our Snowtrekker that we had customized. This was the first time we had used the center stove jack and we learned a lot. The first night we had a 90 degree elbow on the end of the stove pipe. The elbow directed the ash onto our tent, which resulted in burn holes in the canvas. The next day, we took the 90 degree elbow off and added a length of pipe; even being 2 feet above the ridge, the ash still fell down on top of the tent causing several burn holes.

After the tent was set up and the stove was burning, we realized we were set up on a hill. This posed a problem, as the trucker tarp we were using was slippery, causing everything in the tent to slid towards the stove. Luckily, we had tent stakes from our fall camping and we used these to anchor our tarp to the top of the hill. The other thing that helped us avoid sliding into the stove was a heat shield that we had made before we went on our trip. The heat shield is made out of a 1x1 frame with tin foil bubble wrap. It is lightweight and folds onto itself for easy transport because we used hinges to attach the back to the sides.

We got our beds set up and arranged. This year we had a new set up which included Thermarest cots, foam Z-rests, and a Exped downmat 9 for Jenny. We also had new sleeping bags from First Ascent.  They are Downtek 20 degree bags and on the outside, we use a synthetic 0 degree bag. The only problem we had sleeping was being too warm. Supper on our first night was chili mac and cheese. It is amazing that the cheesy goo doesn’t freeze at -30. We also enjoyed a glass of wine from our Bent Paddle insulated growler. It seemed a bit sacrilegious to have wine in a beer growler. We went to bed and slept soundly. 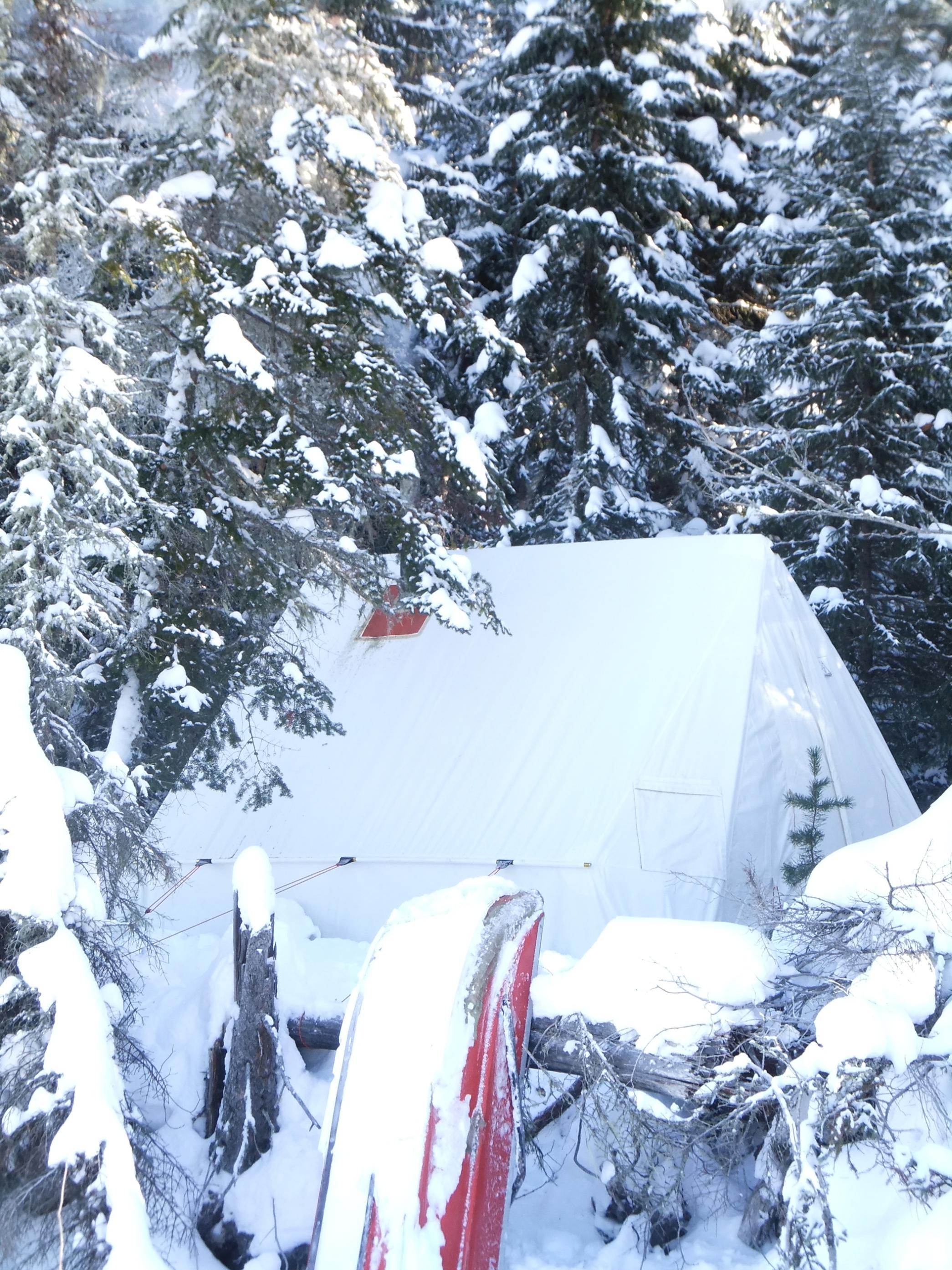 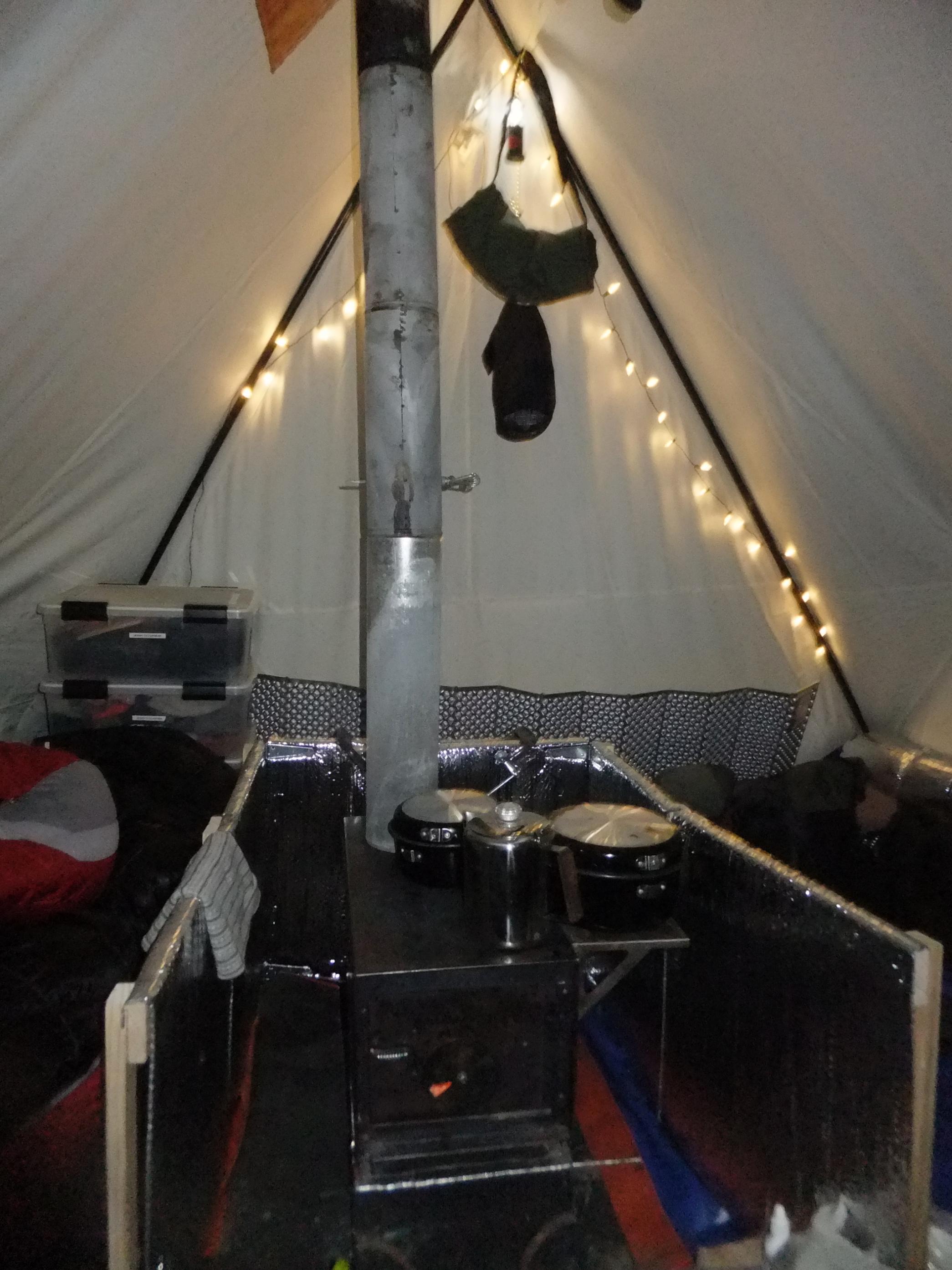 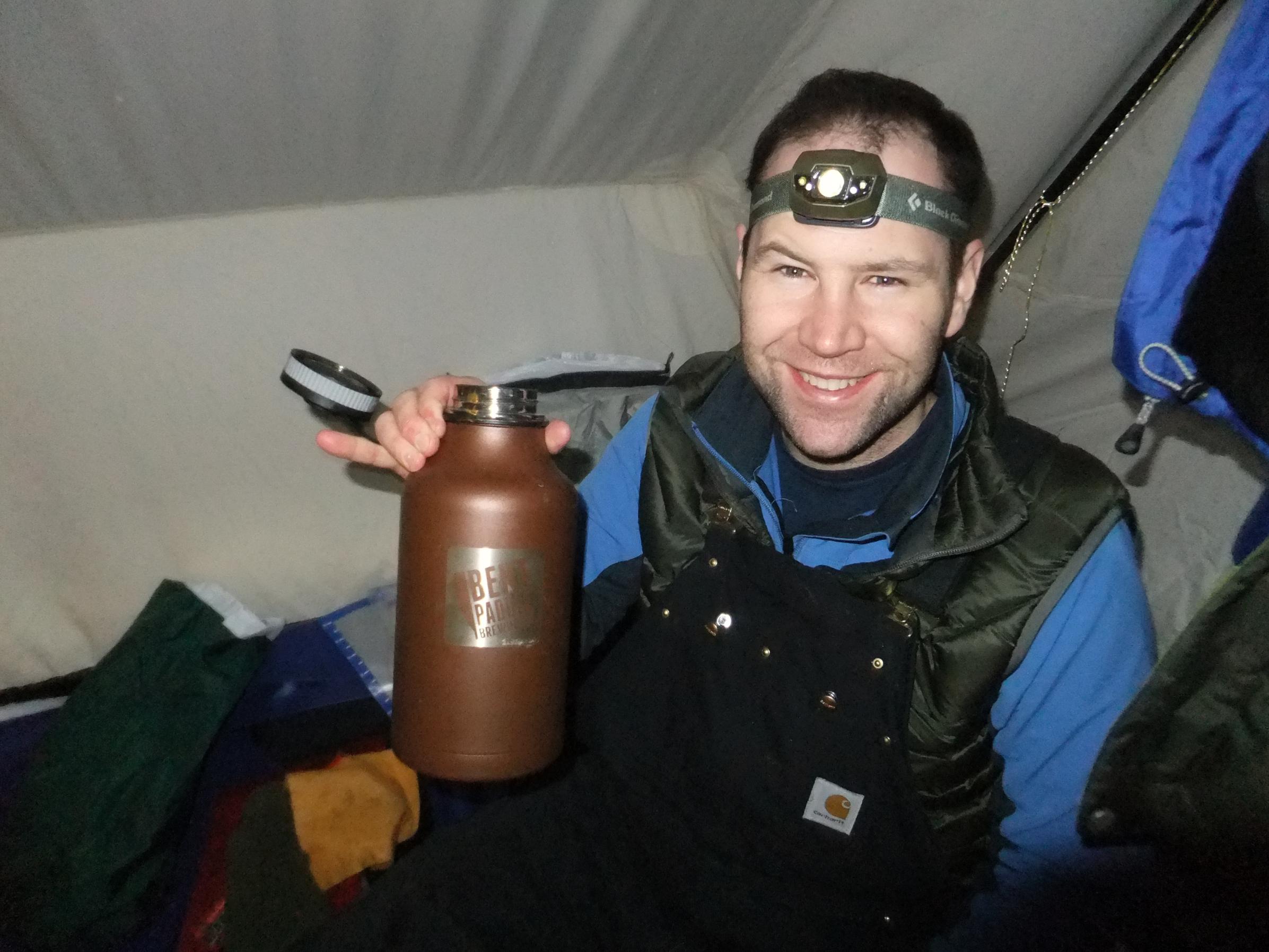 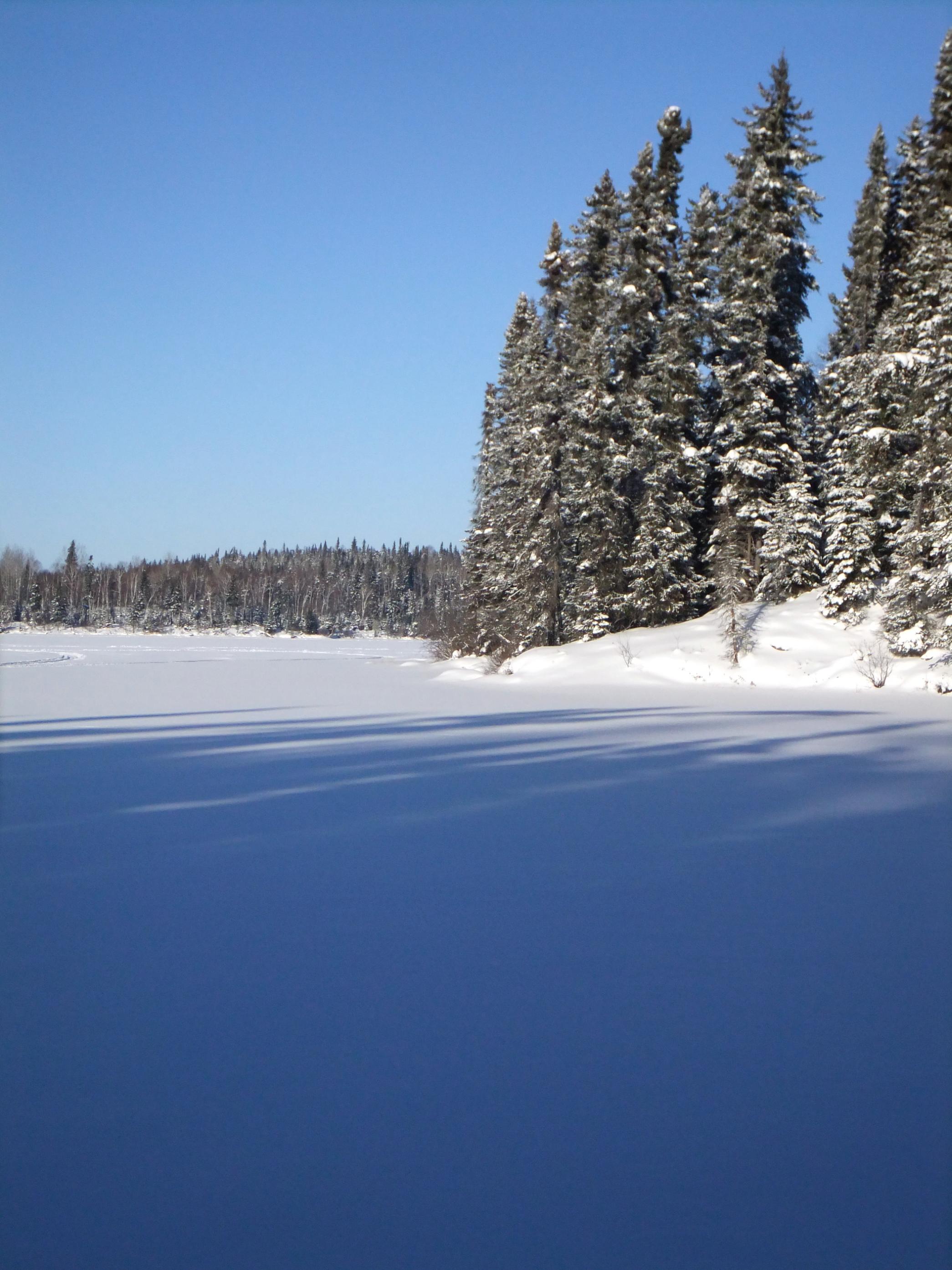 After Chris got up and started the fire, followed by Jenny getting up and coxing the fire to give off heat, we feasted on homemade fruitcake and Via. The fruitcake was delicious and a McShane winter camping tradition. We also had pancakes and sausage for breakfast. We had made the wise decision to use paper plates this year, which saved time in washing dishes. We piled on our winter gear and headed outside to process more wood.

On day two we dropped three standing trees using the 24” Ace Hardware handsaw. The handsaw was great to have because it allowed for cutting larger trees than the Sven Saw. It worked well for each of us to have separate jobs in processing the wood. Jenny cut the kindling and medium sticks while Chris cut and split the larger logs. We had plenty of firewood.

At the end of the day we put out 2 tip ups in front of camp. We were lucky enough to catch a small northern that we used to make fish chowder for dinner on day number 2. One improvement we made this year was using insulated water bottles. We have three of them from Kleen Canteen and one larger one from REI (we lost the second large bottle on the snowmobile ride out into the park). We brought a gas auger, but we ended up using a hand auger to drill most of holes. One thing I would bring next time is a torch to melt the ice off the blade of the augers because we had some trouble with the blades icing up. 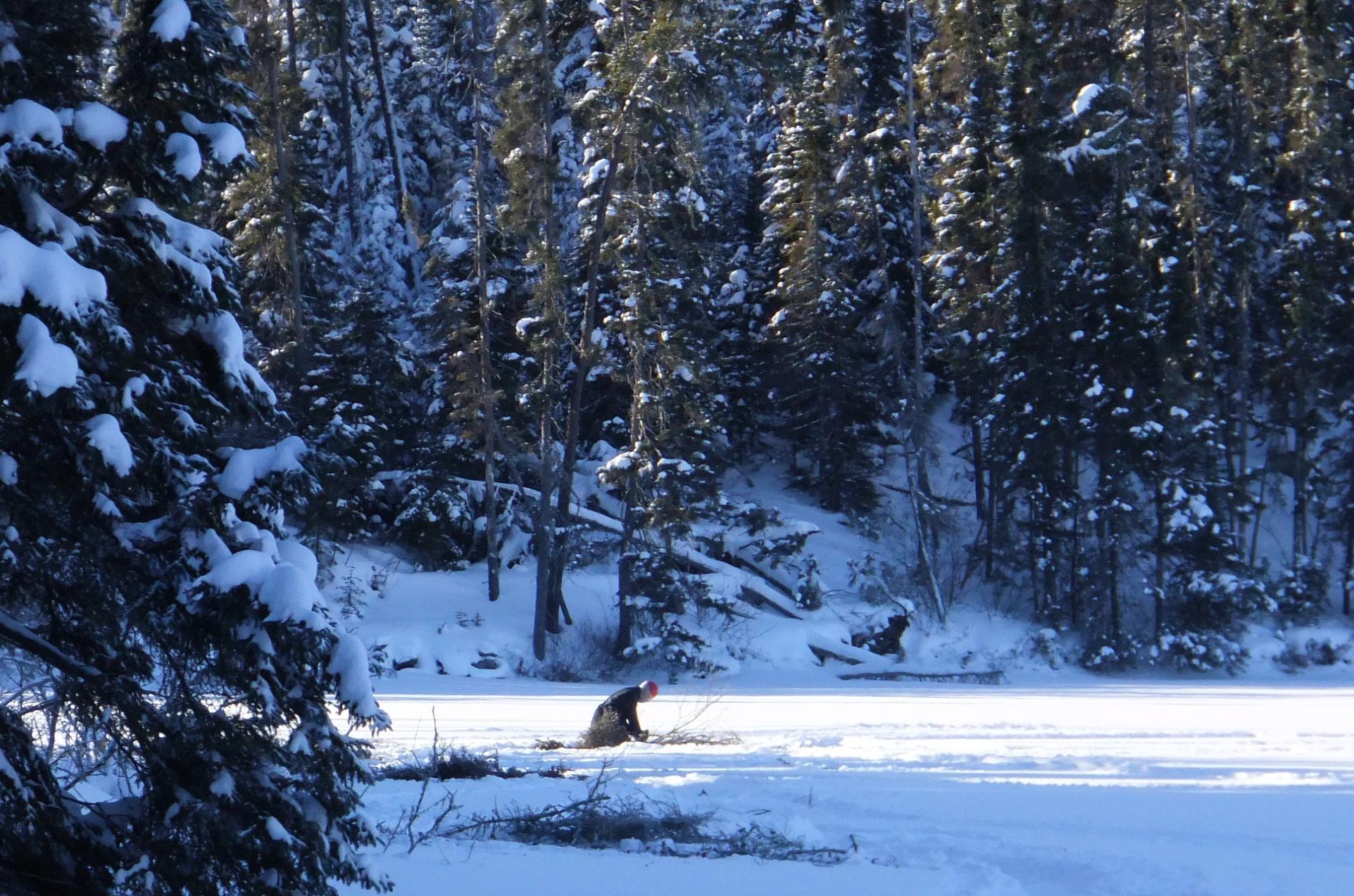 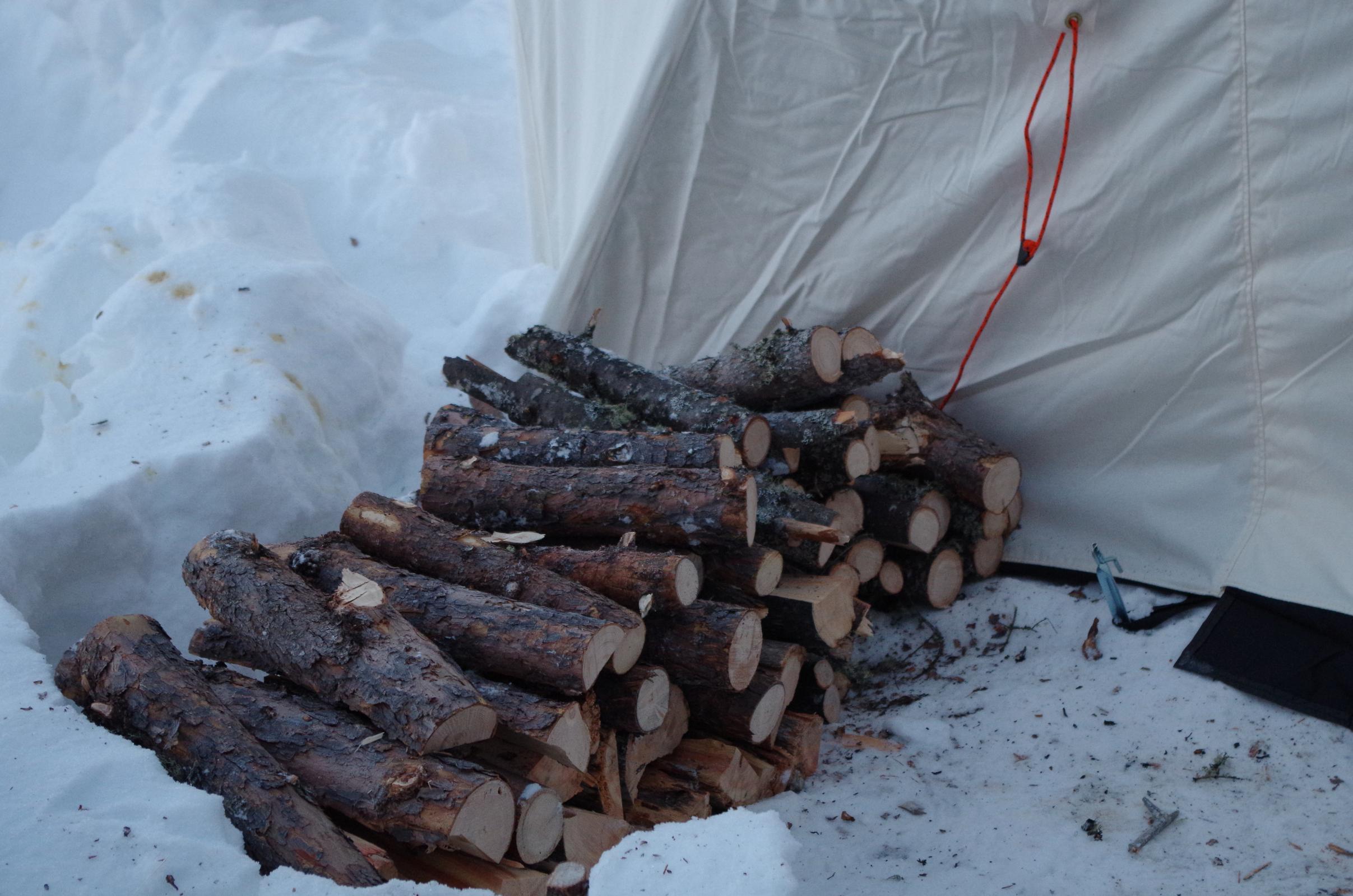 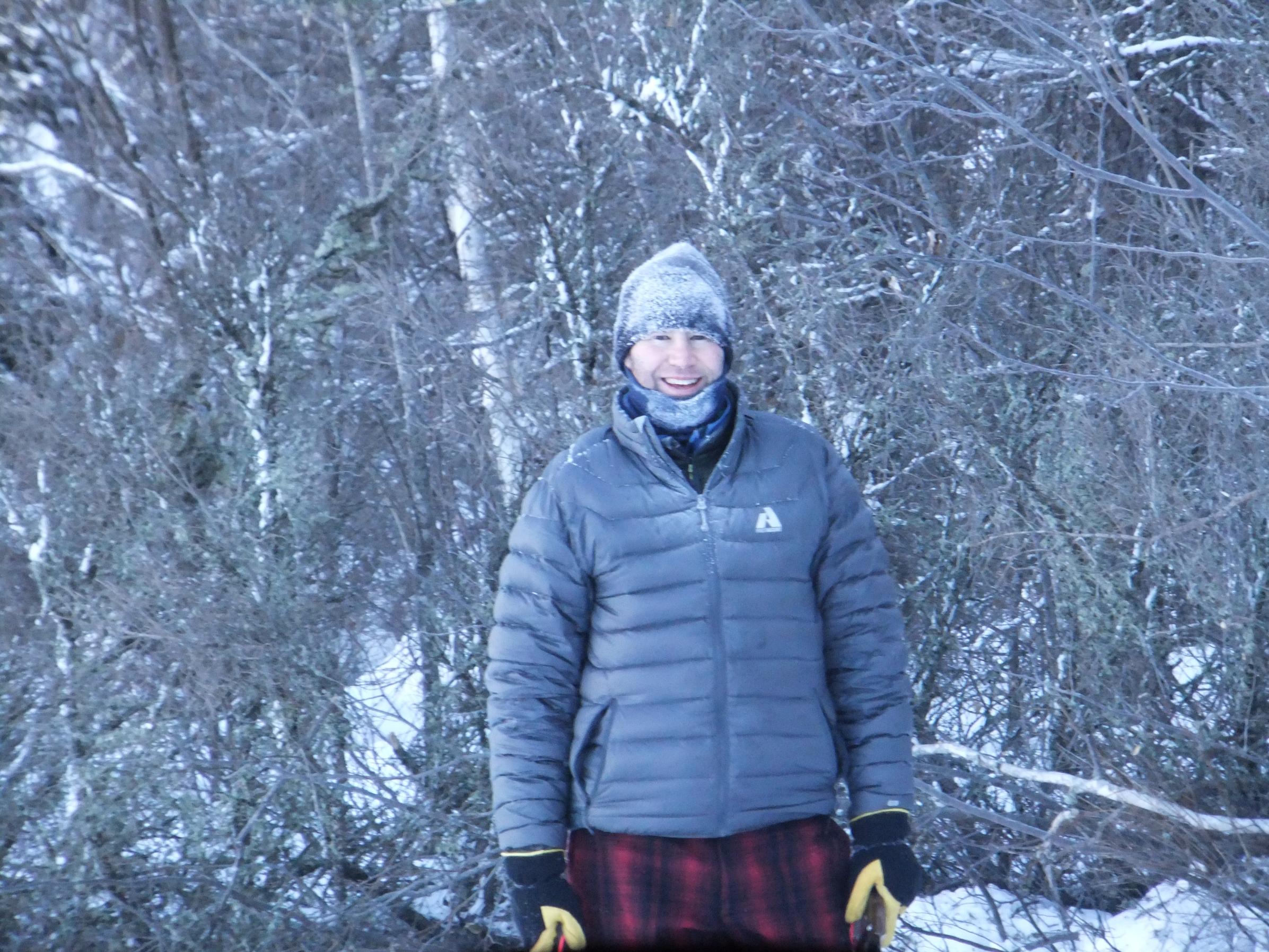 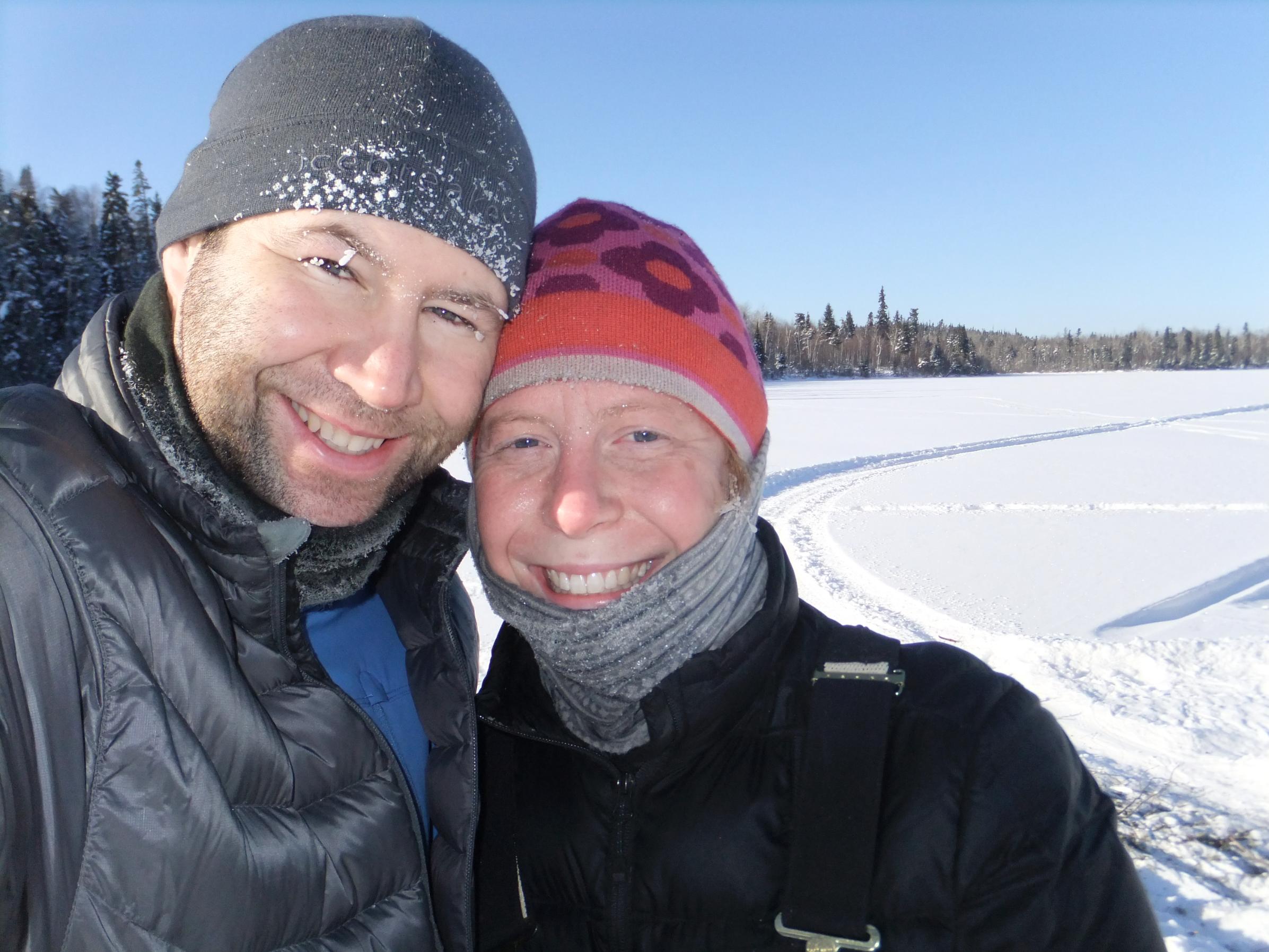 We had enough firewood for a few days so we used new years eve to go fishing. Harlan had pointed out a few islands about 1.5 miles from camp that he suggested we Walleye fish around. We ate a breakfast of grits with scrambled eggs and bacon bits before packing out stuff up and heading off for the hotspot.  We bought our toboggans with. Chris’s toboggan is 13 feet, which allowed plenty of room for fishing gear, warm clothes, the gas and hand augers, and the Eskimo fatfish insulated fish house.  Unfortunately sleds don’t pull very well at -35. It was like pulling a rock through sand. We traded off breaking a trail and pulling the load. It was a good thing we were wearing all wood because we worked up a sweat. Jenny got cold setting up the fish house, but the insulated fish house with a propane heater (along with hot water from the thermos) warmed her up quickly. After getting cold, we were not going to move after getting the house set up.

After drilling a few holes, we got out our Vexilar. We were a bit disappointed to find out we were in 33 feet of water. Not being willing to move we starting fishing. Luckily, the walleyes cooperated. We caught several walleyes and fished until dark. We packed up our fish house and gear for the trek back to our tent. It was a cold hike back, but we stayed warm and enjoyed our starlit trek. When we came around the corner into our bay, our tent was already lit up for us. Our battery-operated Christmas lights had turned on! We learned they were apparently on a timer. We got a fire going and started to clean fish, which was a difficult task because they had stiffened up a bit after being outside at -30 below. The plan for supper was filet mignon, but that was frozen like a brick. We improvised and had a delicious supper of walleye sandwiches and wine. We did not ring in the New Year as after a day outside and pulling our gear, sleep came pretty quickly. 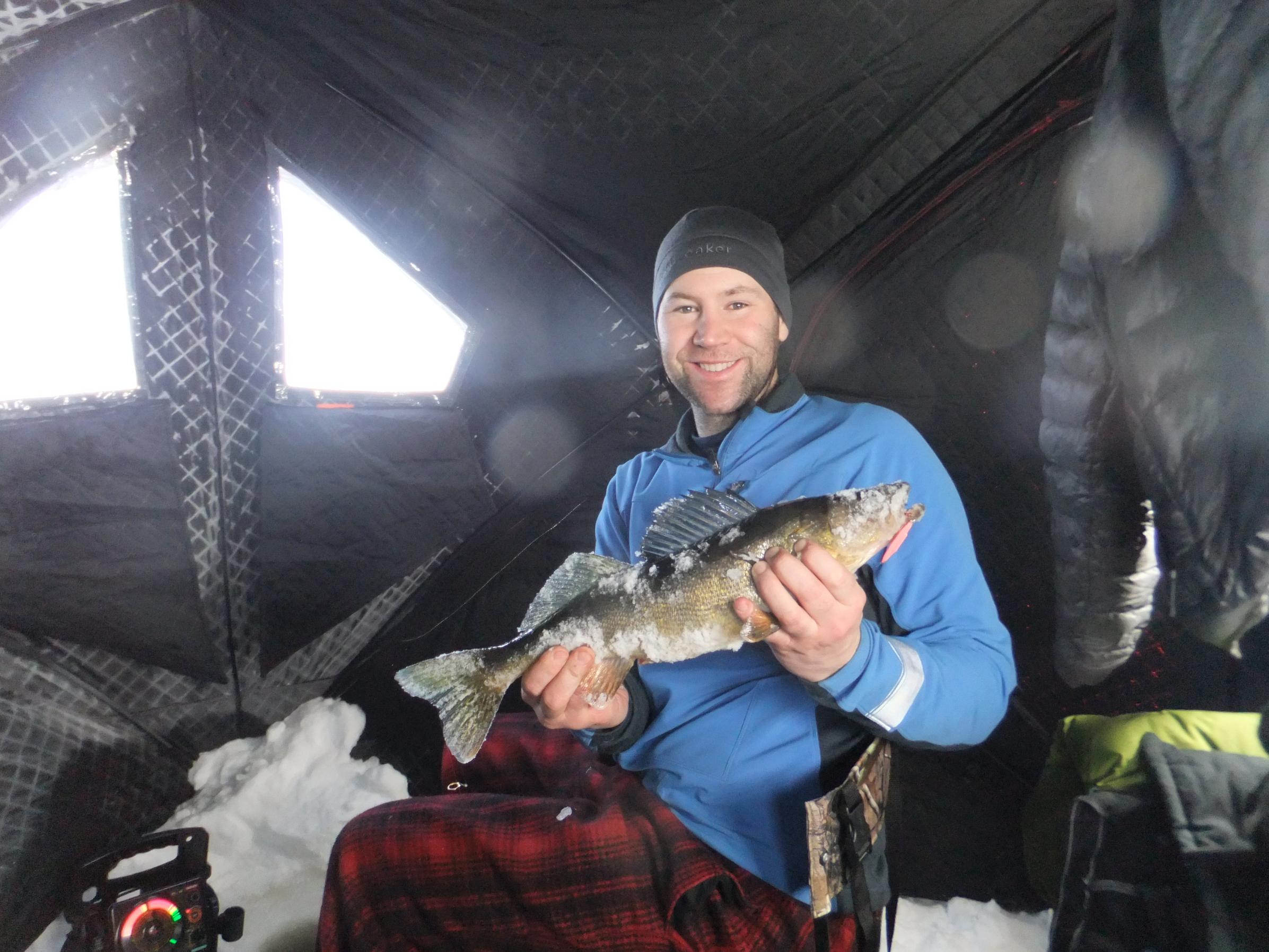 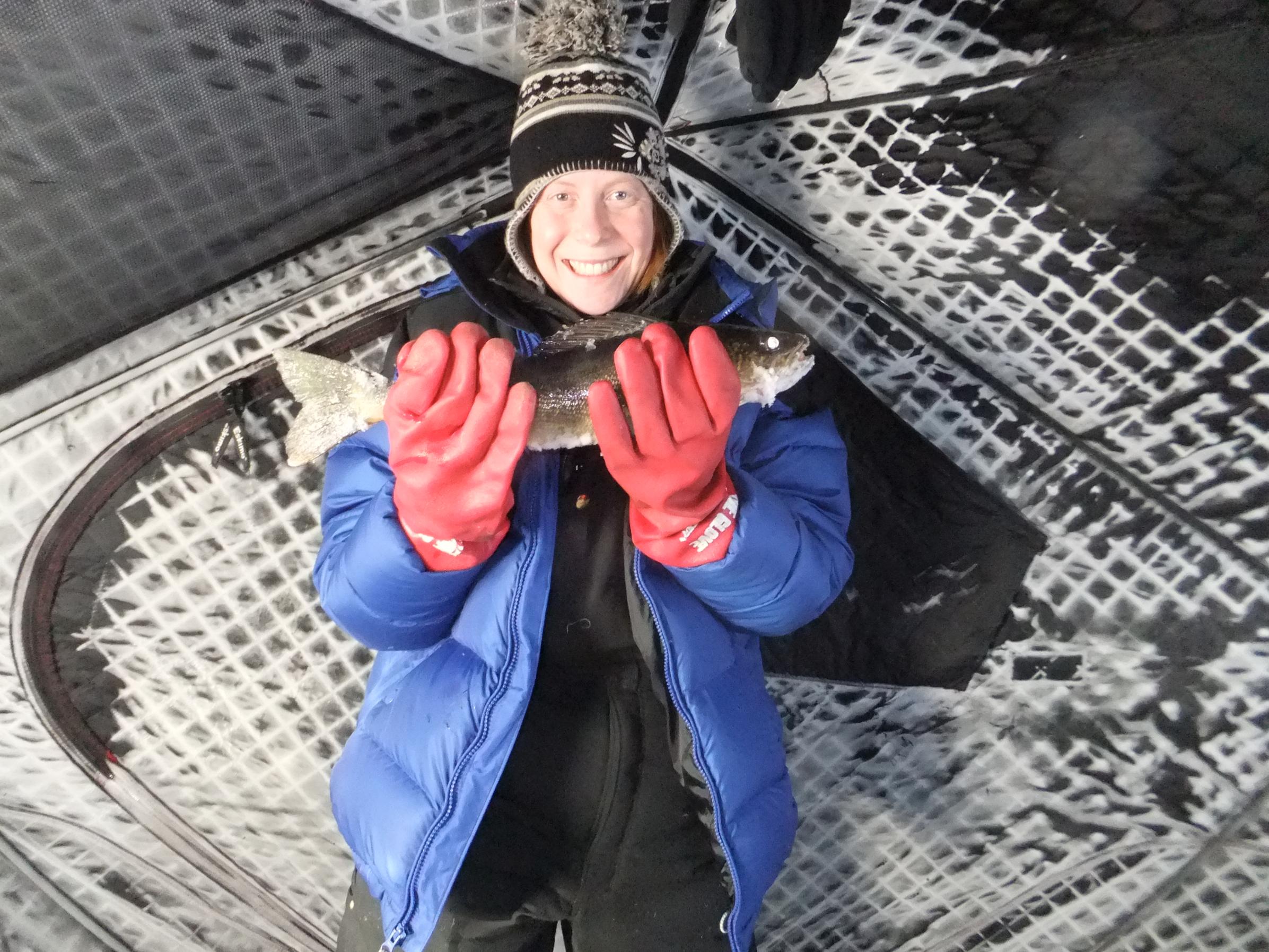 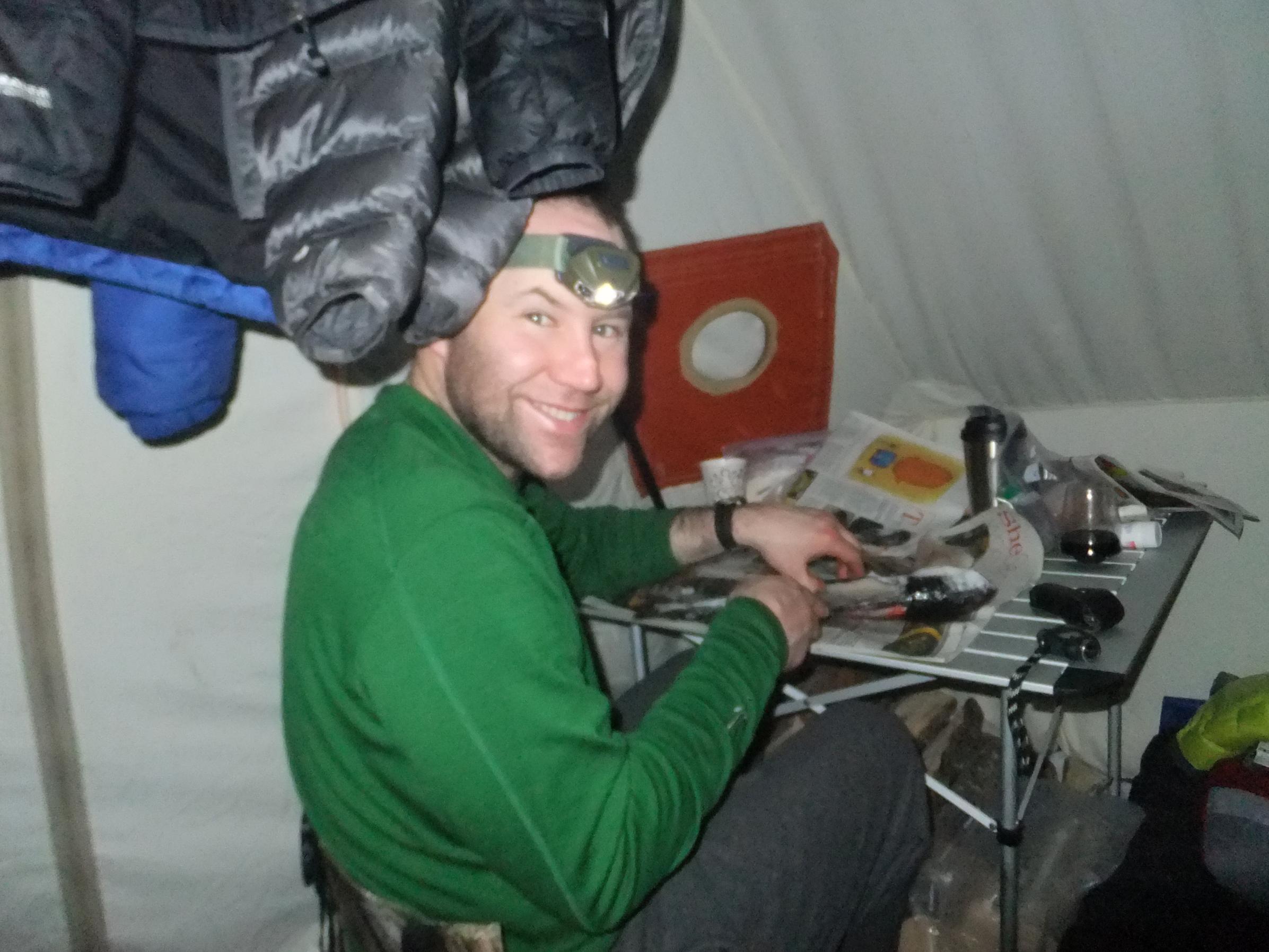 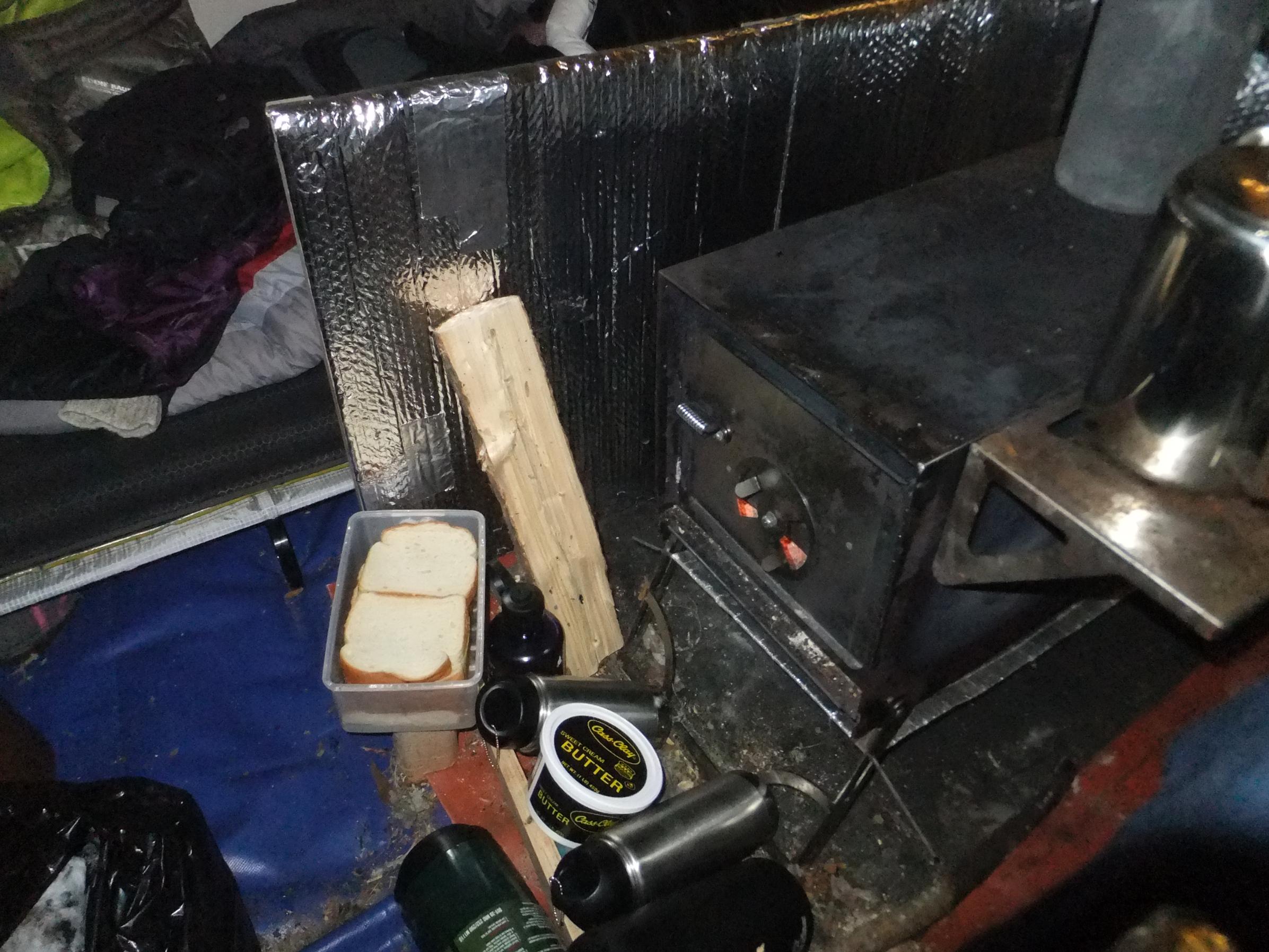 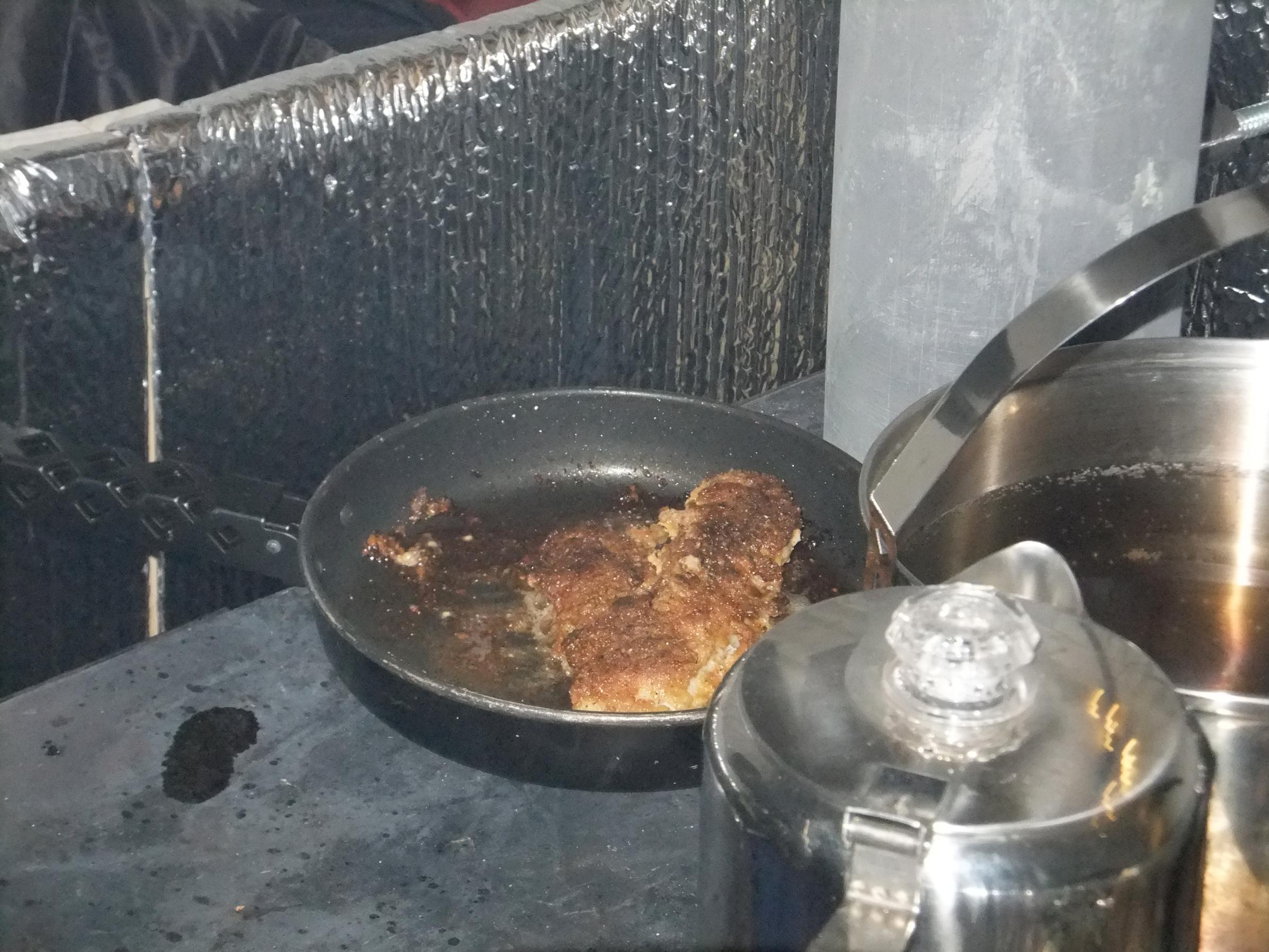 The plan for day 4 was to finish processing the tree we had dropped on the ice and then do some more fishing. We started the morning with eggs, toast, and hashbrowns. We quickly headed outside and began to process our largest tree of the trip. It was about 80 feet tall and 1 foot in diameter at the base. It took about 5 minutes to cut each log off of the base. We finished the wood and had lunch of Camp Chow Mac and Cheese and headed out fishing. We found a fatal flaw of our Fatfish Insulated Ice House. It had become very frosty the day before so once we put our heater inside, it started to rain! We managed to dry it out and began fishing. Unfortunately, we hadn’t found the lucky spot and didn’t get a bite. We got back to camp a little earlier so we could eat spaghetti and to go outside for a bonfire on the ice. Supper was delicious with the rest of our wine and warmed biscuits. We piled our gear back on and headed outside for our nighttime bonfire. As soon as we were out of our tent we noticed the Northern Lights were out. The sky was covered in green hues and the stars were dancing. We quickly lit our fire and began to attempt pictures with our cameras to capture the night sky. We also enjoyed camp toddy in our insulated mugs before heading back into the tent. We got our tent a little too hot this night using our Gren Heat logs. Note to self-two Gren logs are enough. We managed to melt one of our battery lanterns. The tent was well above 100+ degrees and we were stripped down to our baselayers sitting by the door. It got so hot, it started to melt our tarp, luckily our tinfoil bubble wrap saved the day, once again. 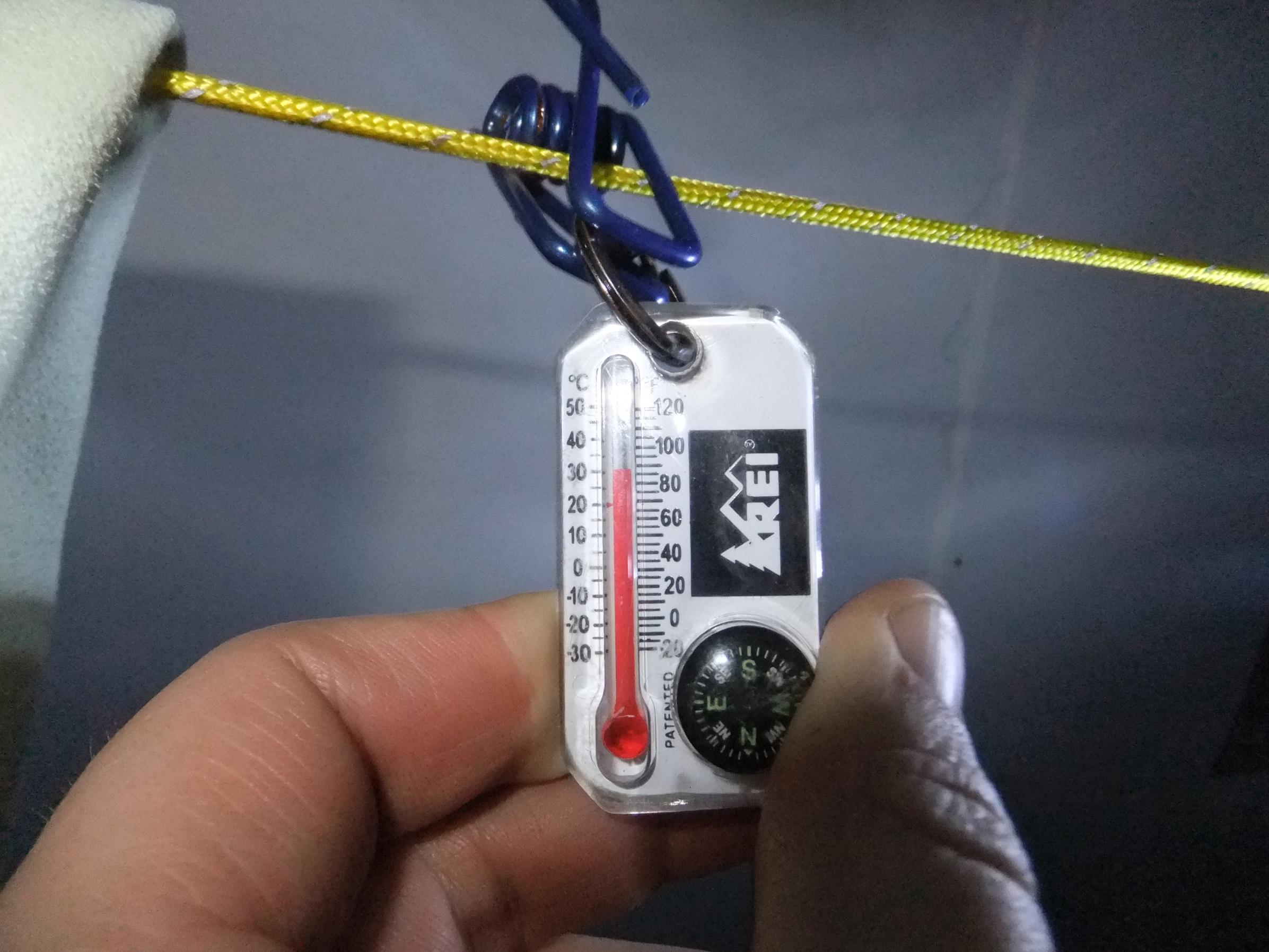 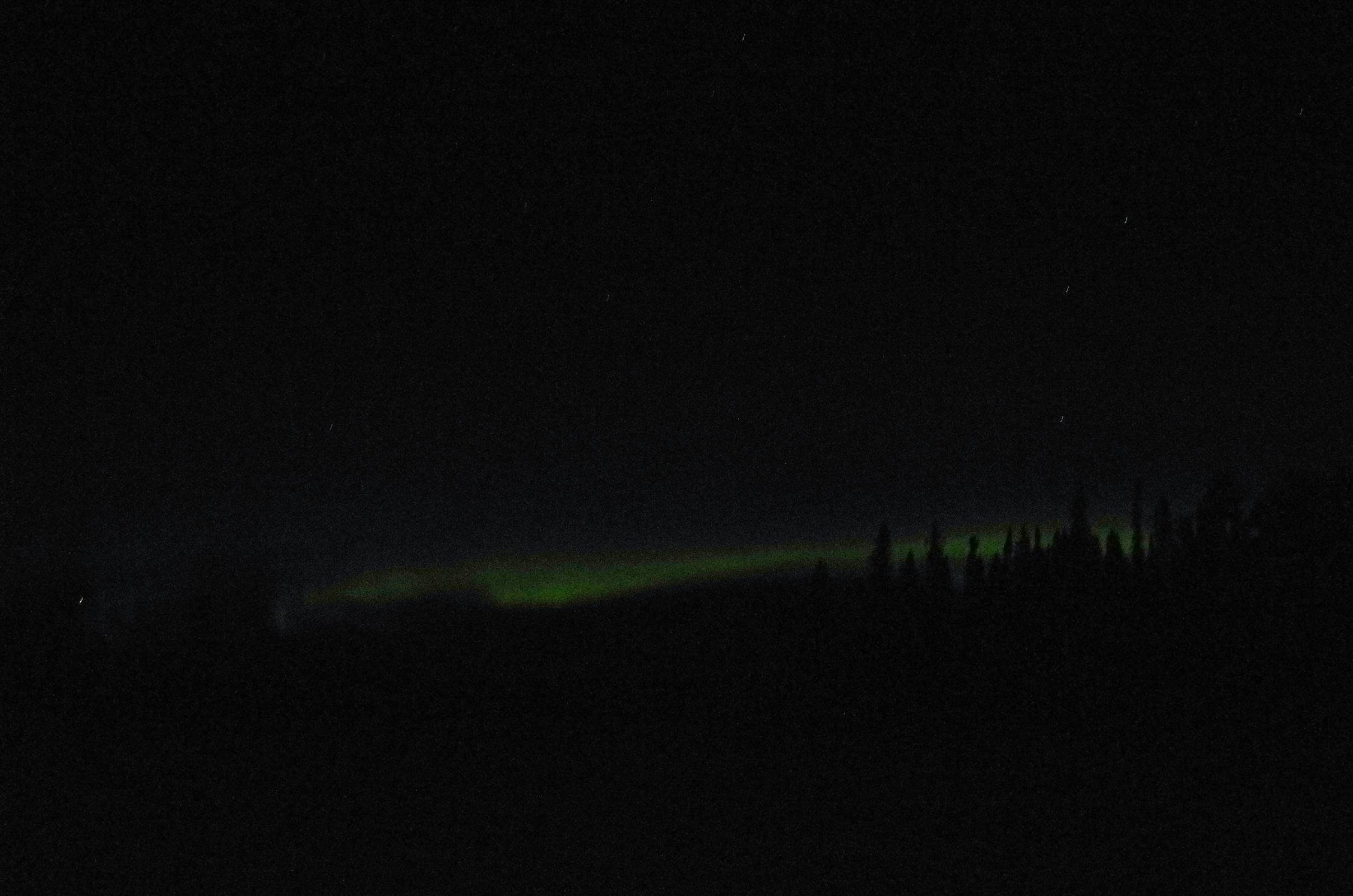 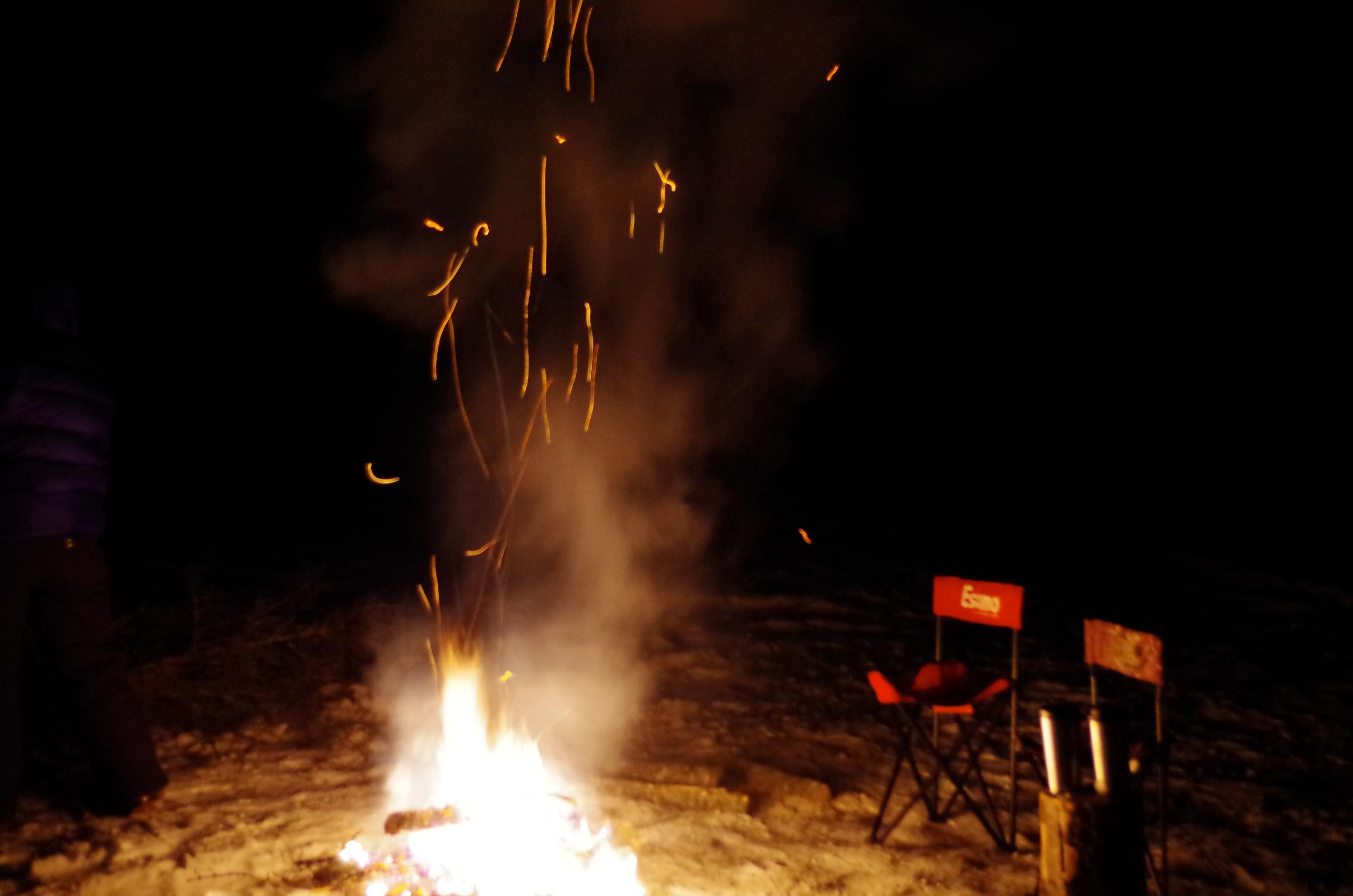 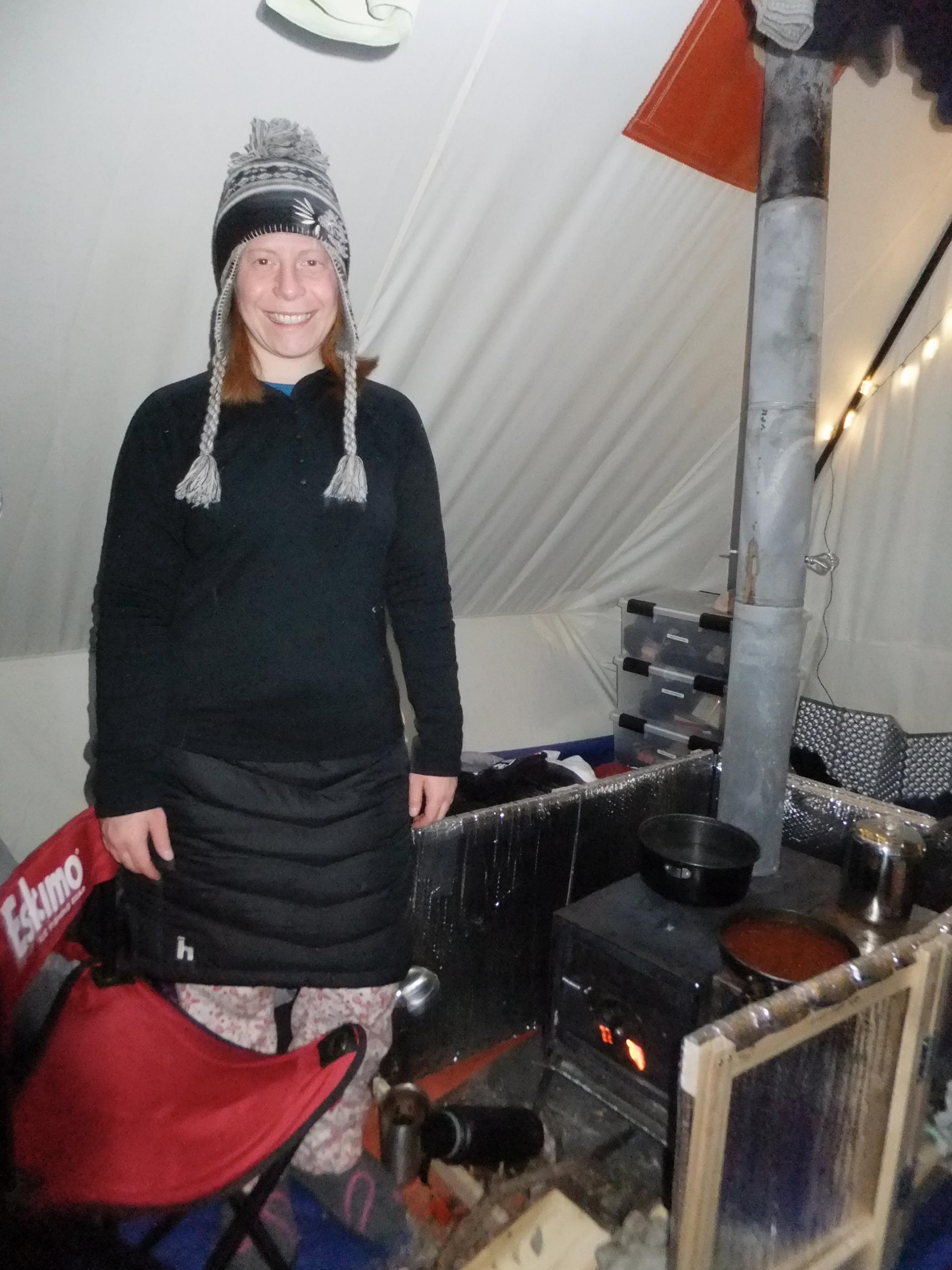 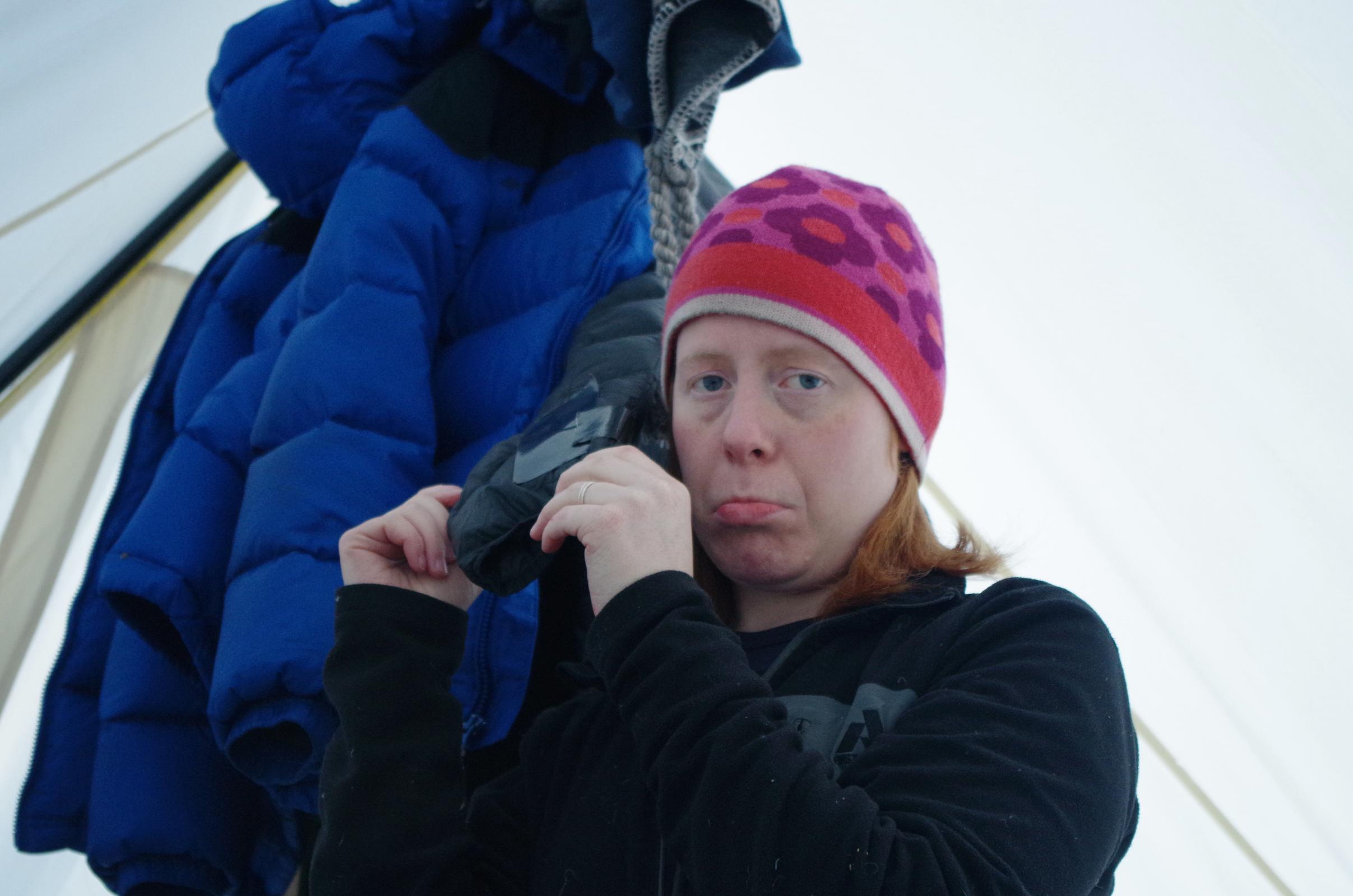 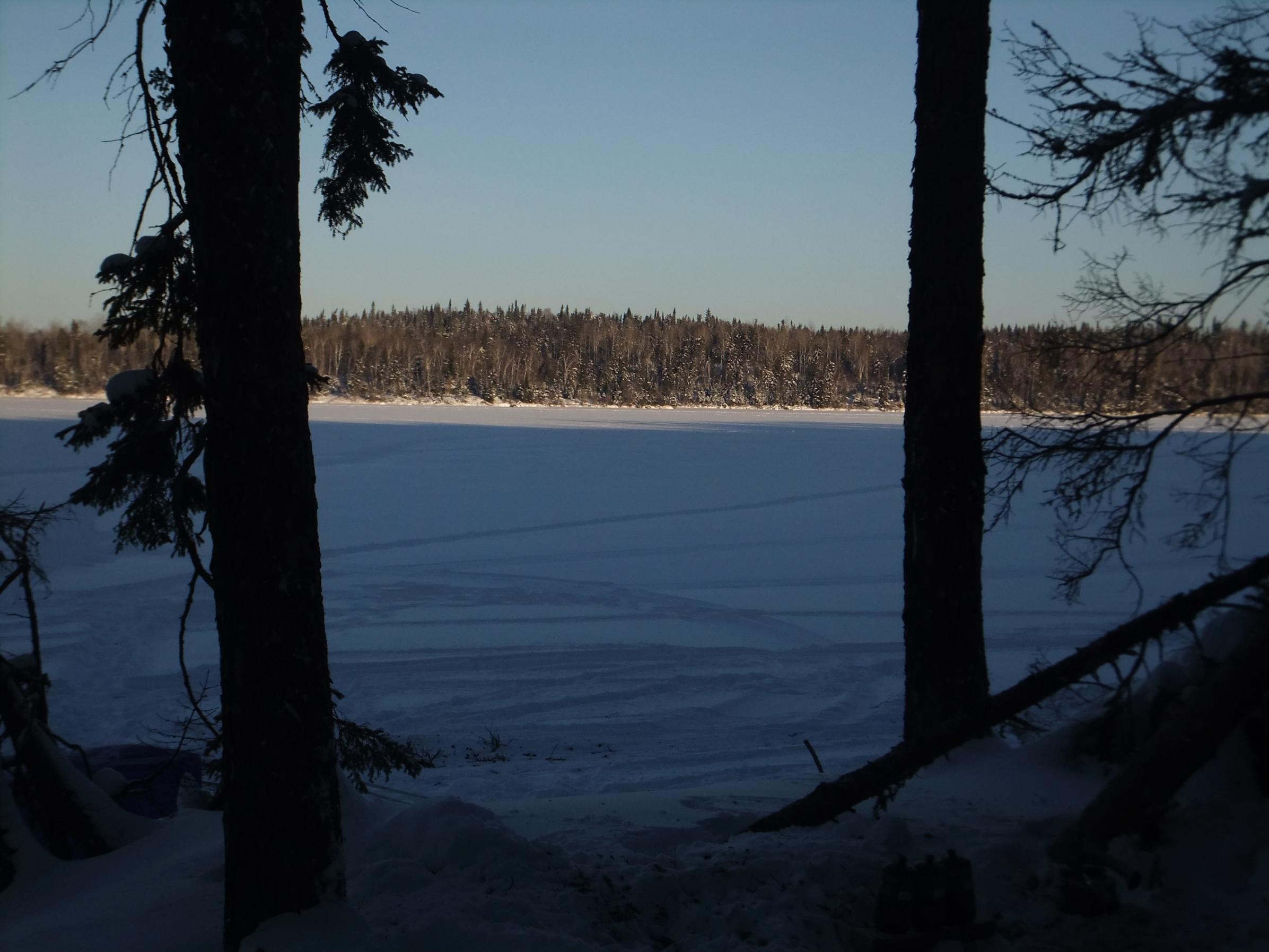 Our pick up was scheduled for noon so we started to take camp down after a breakfast of oatmeal. We then started the difficult process of trying to put all of our gear back in our plastic bins. Unfortunately, this was difficult as many of them had cracked on our snowmobile ride or simply from a little bit of pressure. Jenny taped them up with gorilla tape and camp gradually was dismantled. Harlan and Matt showed up right on time and helped take down our tent. Matt warmed himself inside the fish house that we had set up to defrost. We had a lunch of hot dogs over the fire before leaving. Our gear was strapped back on and we headed back to Red Lake. The ride was much more enjoyable as it was only - 27 instead of -35. Jenny was also able to keep her helmet free from frost and got to see the entire trip back to town. Once we were back in Red Lake, we found our poor minivan was no match for the cold and it would not start. We got a ride to our hotel where we showered and got ready for supper at the Howey. We had supper with Harlan, Matt, and Katelynn and talked about our trip. They said the lows had been between -35 and -45, which was record cold for Red Lake in the first week of January. The next day, our car did start as it had warmed up to a balmy -15. We left Red Lake and headed south in a snowstorm. We saw a mangy, injured wolf on the highway out of Red Lake., which was the only wildlife of our trip. We joined Jenny’s family at their cabin on Upper Red Lake to tell more stories from our amazing trip. 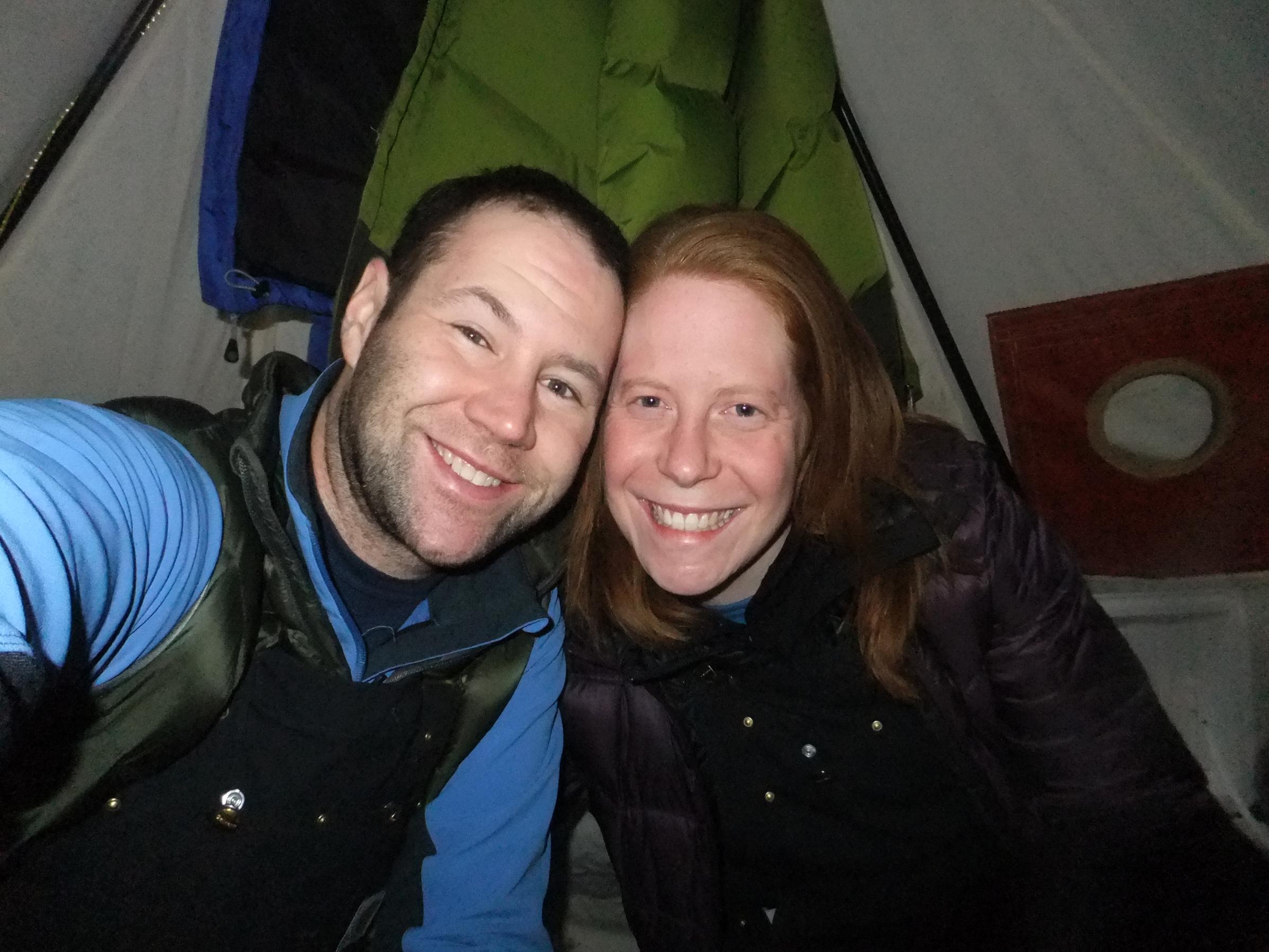 Reflections from our trip…

*The solitude in Woodland Caribou is untouchable

*We will need to fix the burn holes in our Snowtrekker-any ideas are welcomed!