Trip Type: Paddling Canoe
Entry Date: 05/23/2014
Entry & Exit Point: Baker Lake (EP 39)
Number of Days: 5
Group Size: 3
Trip Introduction:
This would be our first trip of the 2014 paddling season. Along with the customary enthusiasm that accompanies the planning of such an adventure, our eager anticipation was further heightened by a few other noteworthy occurrences. Naturally we had an array of new gear items that we were excited to field test. Besides an assortment of outer wear for our daughter Aurora, Vickie had used her REI dividend for a new canoe seat (her old one passed down to Aurora). And, I stumbled across a great deal on a set of Motorola walkie talkie/weather radios during a recent visit to Radio Shack. In preparation for the upcoming canoe camping season, we’d also spent the late winter/early spring dehydrating several pounds of hamburger as well as multiple vegetable combinations. More significantly, last spring our traditional May trip was cancelled due to the passing of Vickie’s mother. So, consequently, we completely missed out on the annual rejuvenating splendor of canoe country ‘springing’ to life. Secondly, (on a more upbeat note) in an effort to most comfortably accommodate our growing daughter, we used our tax return to purchase a three seat Souris River Quetico 18.5 from Piragis Northwoods Company earlier this spring. And, this would actually be our first opportunity to paddle our new (to us) used canoe. Of course we were most anxious to see how our (nearly 3 year old) daughter would conduct herself in her very own seat, without Mommy being right there to rein her in. So we chose a route that would, by and large, circumvent big water. Our base camp set up on Jack lake, along the Temperance river flowage, afforded us multiple excellent day trip opportunities, while minimizing the probability of having to cross large expanses of open water with a potentially restless & mobile child.
Discuss Trip: View Discussion Thread (33 messages)
Day 1 of 5
Friday, May 23, 2014

Last night, we made it up to Sawbill Outfitter’s in time to secure our permit. Furthermore, we had spent the evening at the small Baker Lake campground, which provided us a substantial advantage for getting an early start this morning.

As forecasted, it was shaping up to be a gorgeous day. Since this was our first trip with our new canoe, initially we had a minor quandary trying to figure out how to best load the packs & gear. Vickie quickly devised a viable solution with Aurora sitting facing Daddy. Almost straight away, she was riding at ease in the lap of luxury. 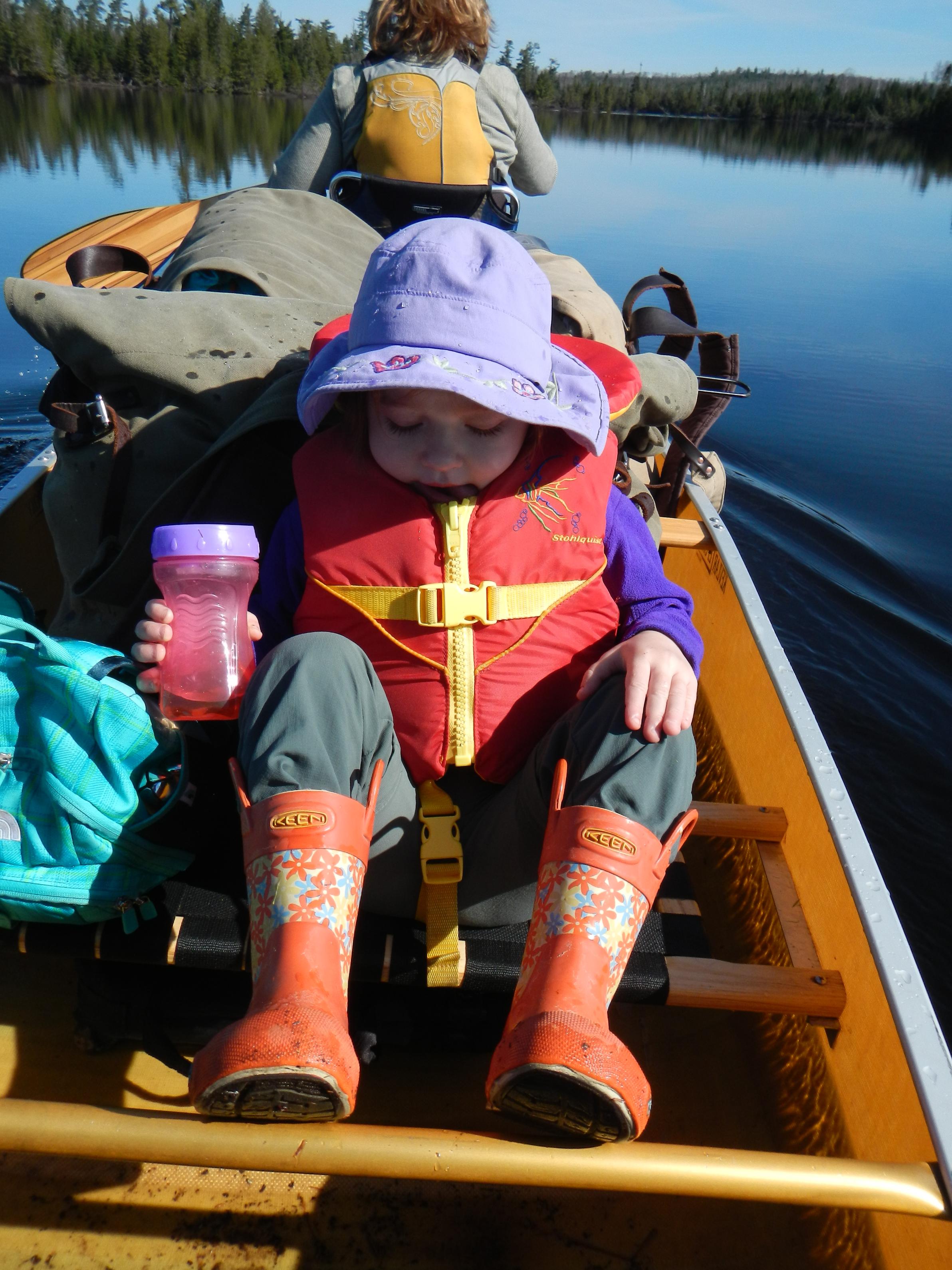 As we approached our first portage, there were 2 sets of mergansers patrolling the pool where the rapids wash out into Baker Lake. This is a short, very easy portage. So, even though the water was high, we gave no thought to lining or walking the canoe up these rapids.

There were several ‘fallen soldiers’ from the ’99 storm along this trail. We stopped to pay homage to some of these impressive old sentinels of the forest. 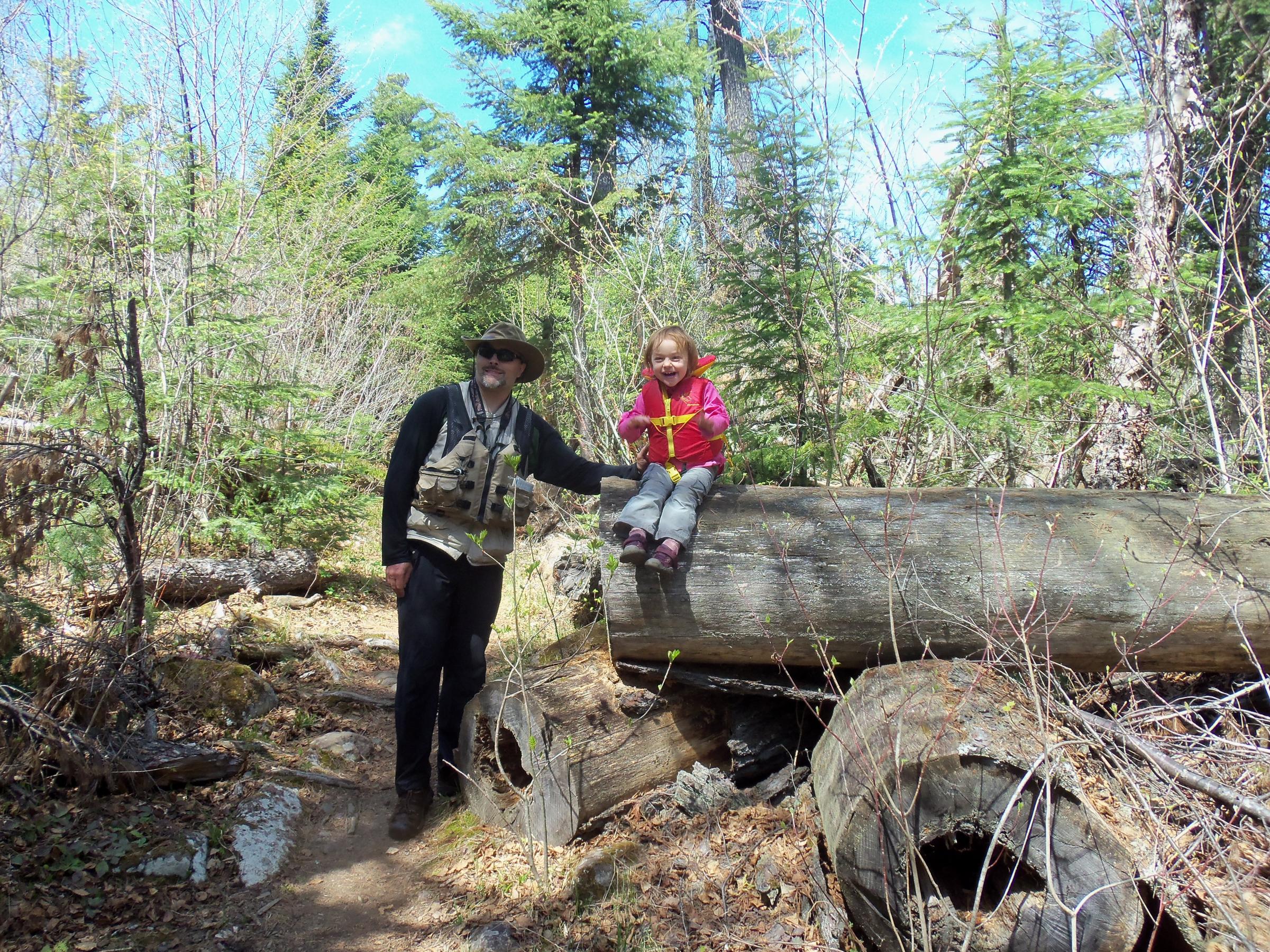 The end of the portage put us back on the water precariously close to the head of the rapids. We walked the canoe up river a ways to forestall any chance of getting sucked back down the whitewater chute. Even having taken this precaution, with the water levels being so high, we struggled against the current in a couple of spots further up river, but, eventually made it through to Peterson Lake.

The 3 rod portage between Peterson & Kelly lakes wasn’t even necessary. In fact, if I hadn’t been through the area before, I might not have even known we paddled right over it. 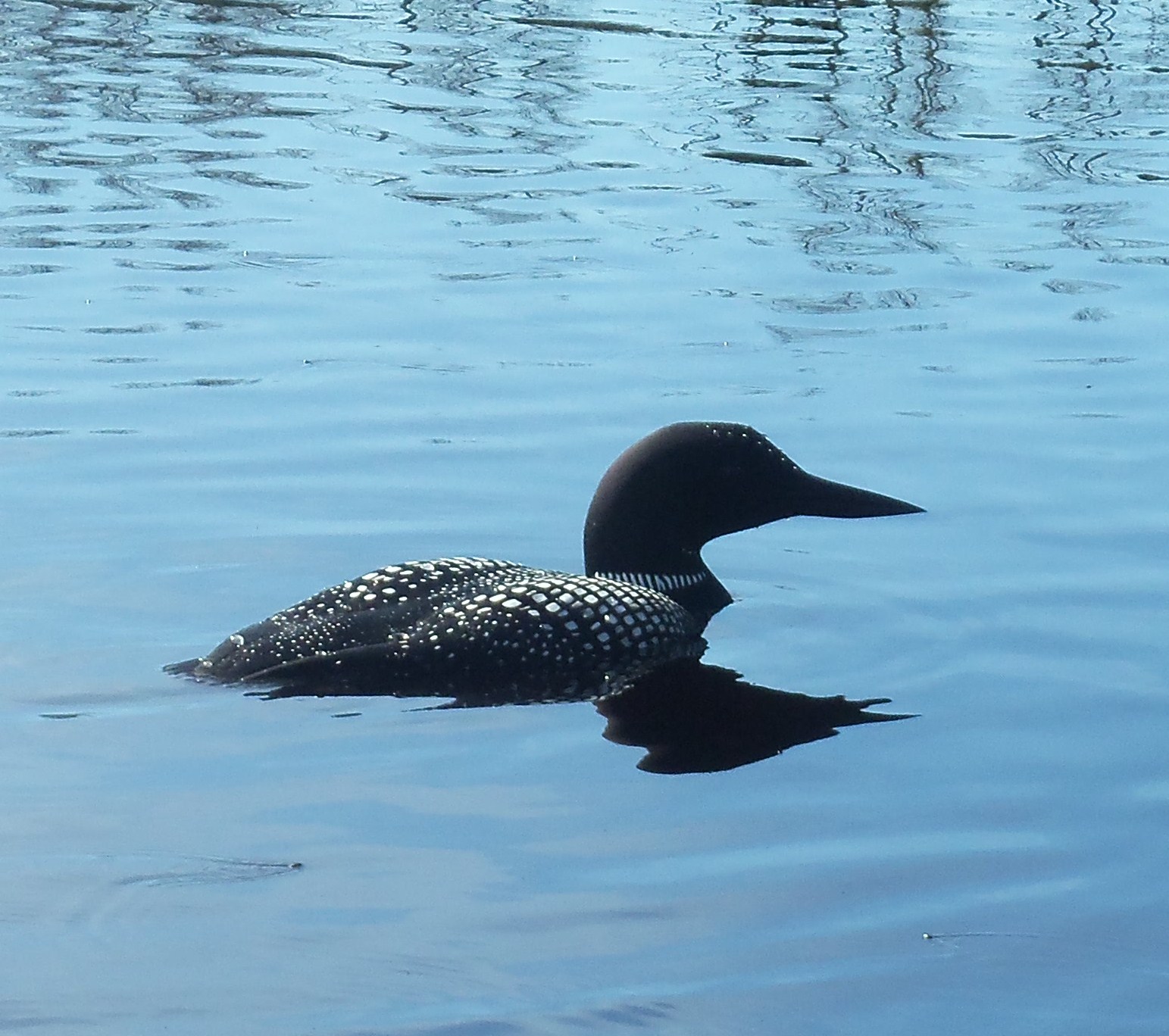 Once out on the lake, there was a gregarious pair of loons greeting us. Aurora was fascinated with her new diving feathered friends, so we lingered awhile before moving on. Our tentative plan was to try & get the campsite near the Jack lake portage. Still, we traced the eastern shoreline to give the campsites there a cursory examination and determine availability if we needed to backtrack.


All the southernmost sites on Kelly Lake were open. So we paddled on with reassured confidence knowing we could claim one of these campsites by retracing our route if needed. As we entered the narrows, unmistakable evidence of the ’99 windstorm was still perceptible along the high hillsides. As fate would have it, the site near the Jack Lake portage was occupied. Since we’d gotten such an early start and had made good progress thus far, a quick decision to continue pushing north was agreed upon.

The 72 rod portage into Jack starts out as a rocky jumble. Eventually the frequency of annoying protruding rocks dwindles and the trail becomes a very nice walk in the woods, complete with a substantial length of boardwalk near the end.

This would be the first real portage (the very short Baker ~ Peterson portage not withstanding) where we would let Aurora go somewhat on her own. She had her own backpack, which she was determined to carry. Vickie also attached some bells to her so we could always hear where she was if she ever got too far ahead.

She did stumble and trip once on the boardwalk, but, for the most part she did an exemplary job of negotiating the portage. And showed no inclination to wander off the trail or get too far ahead, or behind, whomever she started crossing the trail with. Our Little Miss Independent! 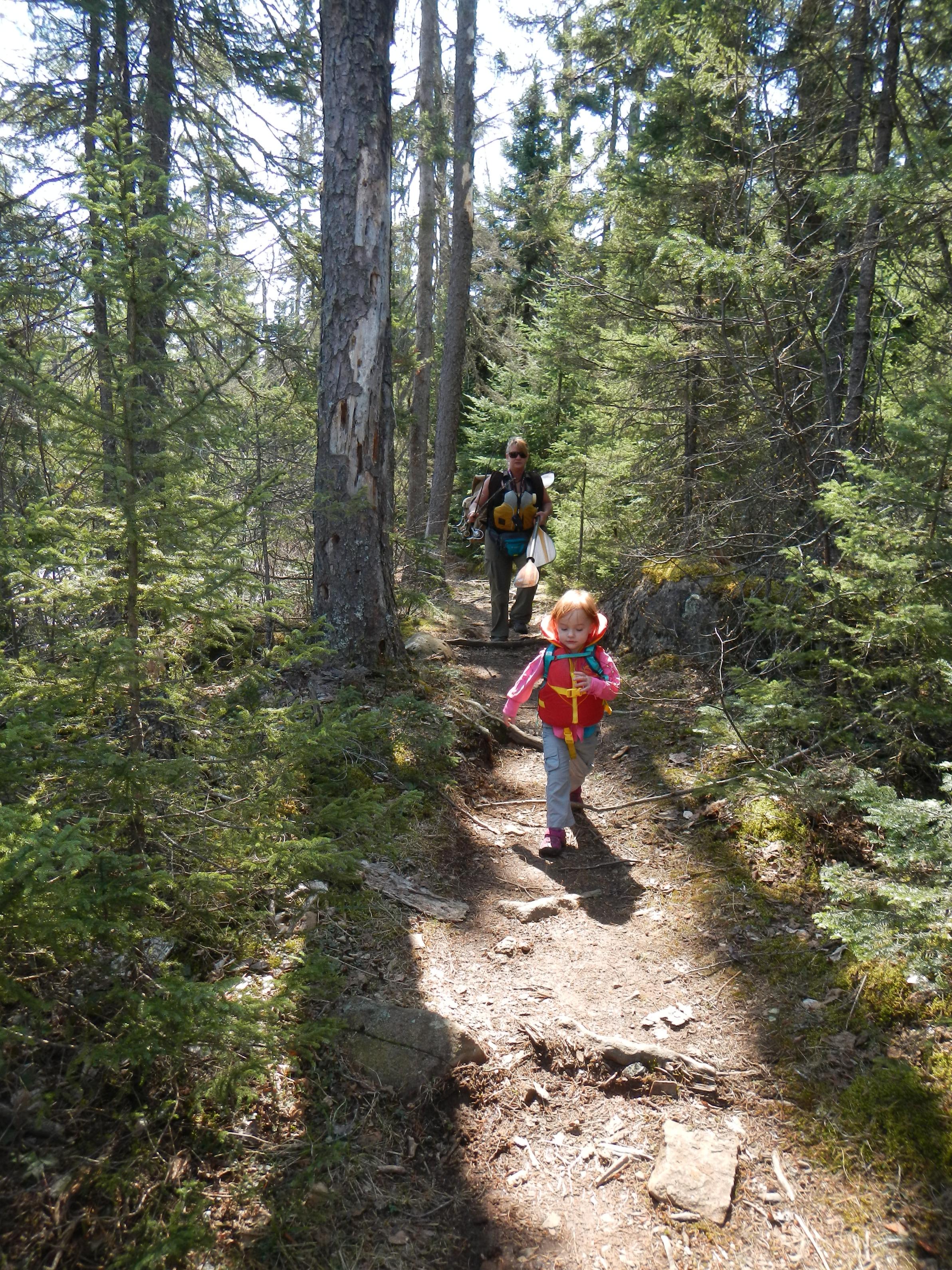 Just west, off of the Jack Lake landing is a semblance of a trail leading back to the Jack Lake Mine. Since it was still quite early in the day, we felt compelled to explore.


It was probably about 50 yards back in the woods from the portage landing on Jack Lake. In fact, with the leaves not yet fully filled in, Jack Lake was just barely visible from the entrance to the mine.

In her book, ‘Sawbill’, Mary Alice Hanson identifies the person who dug the mine as local silver prospector Bill Plouff. He was the youngest son of the Plouff family. (The small creek that crosses the Sawbill Trail was named after this family.) Having a cabin on Kelly Lake, he also served as a local guide to fishermen in this area during the 20’s & 30’s. Obviously he never hit pay dirt, and the mine was abandoned. There are, however, several rusty artifacts left behind in and around the mine 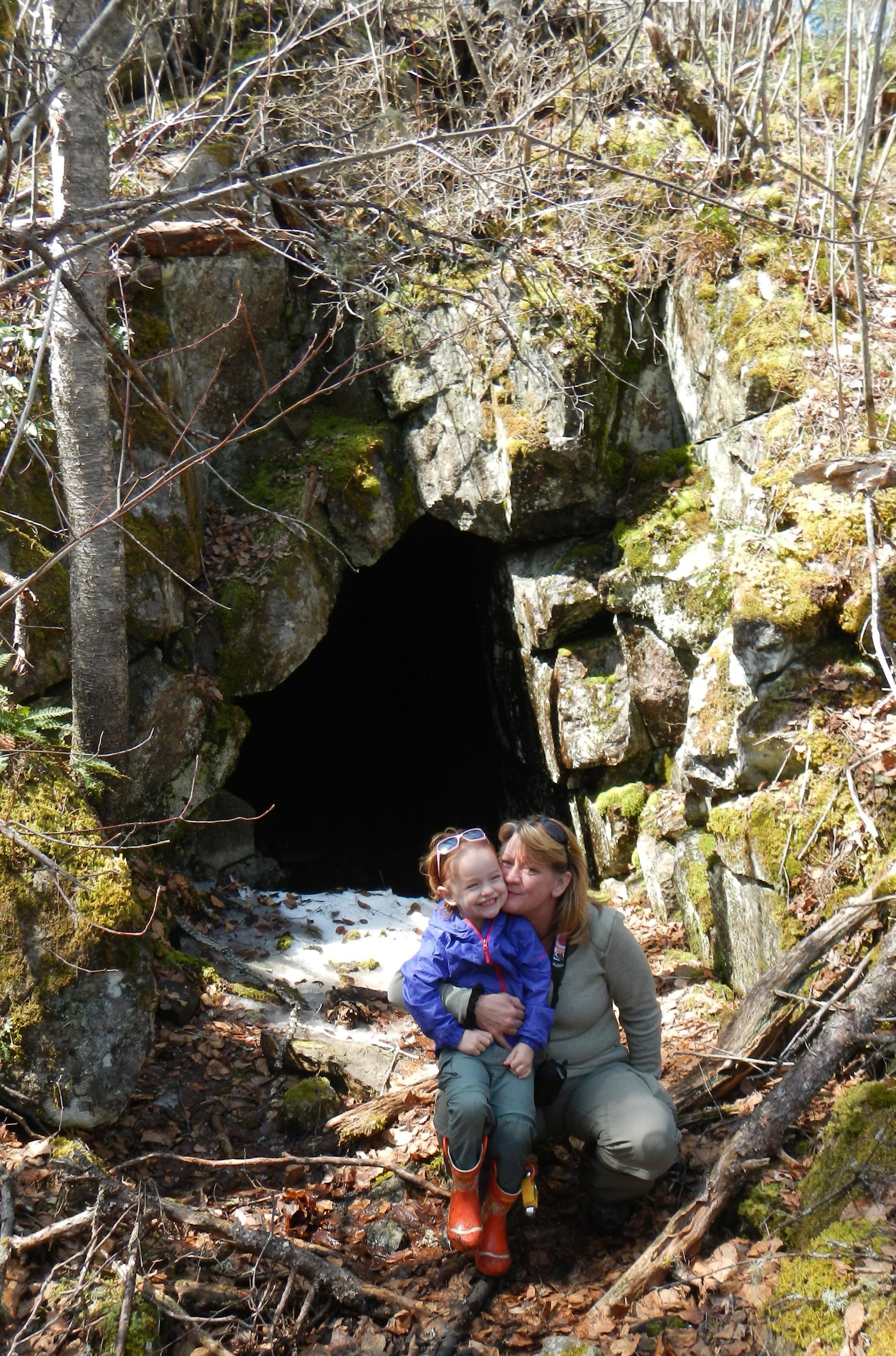 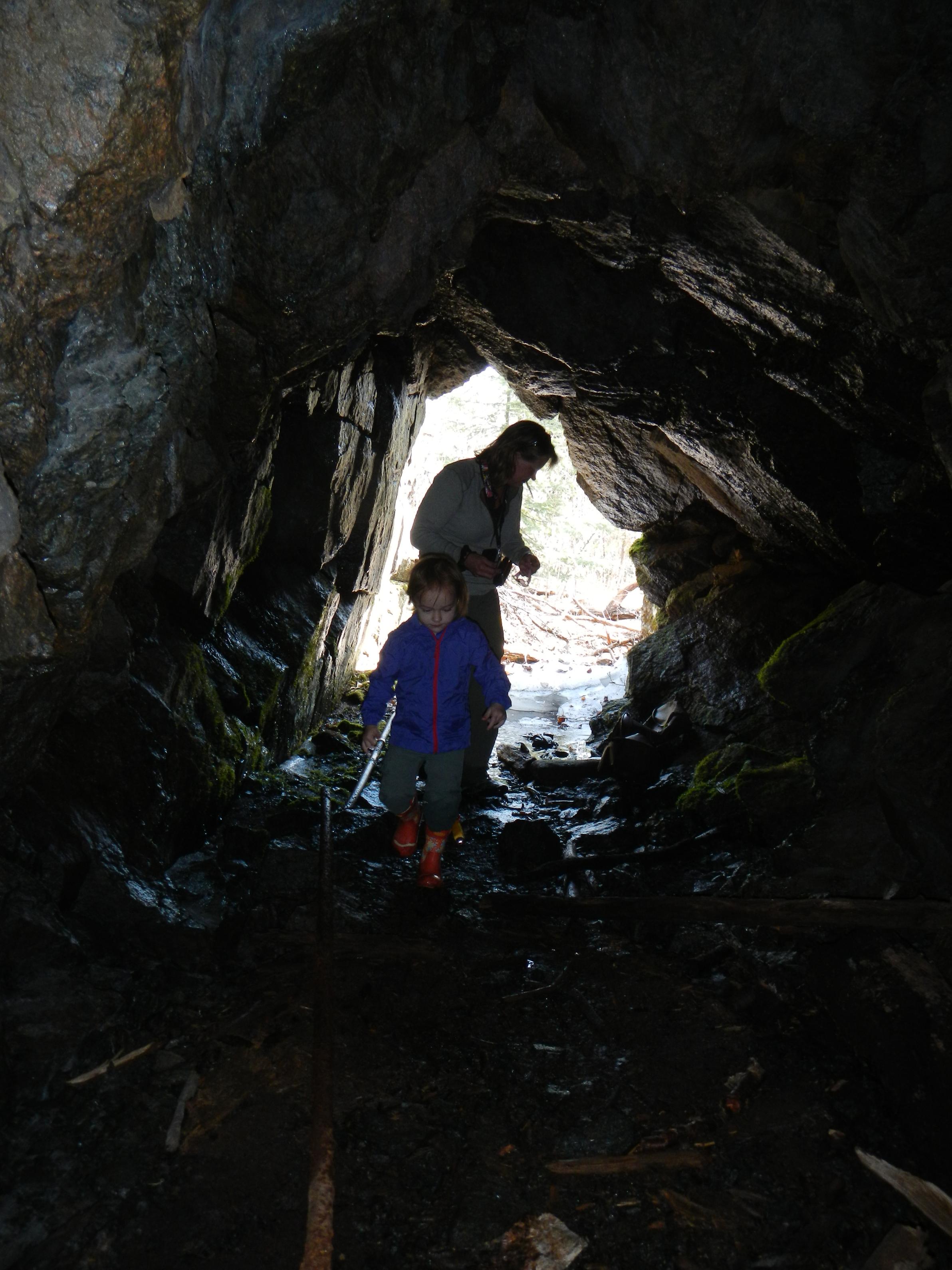 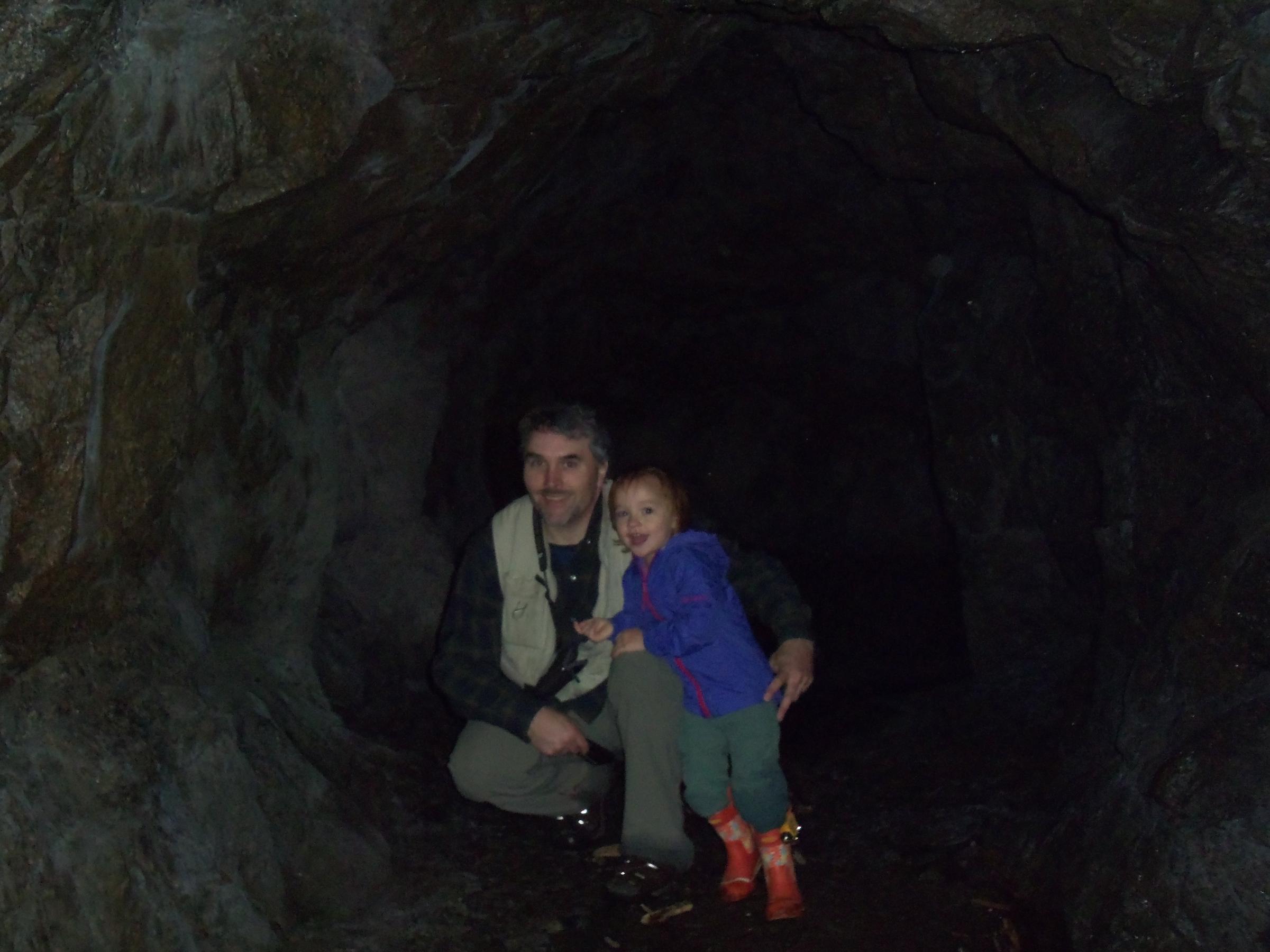 This was also an incredibly cool spot to explore in the literal sense. There was still some snow and ice inside and near the entrance, so the cave interior served as a great place to take reprieve from the intensifying heat of the day.

Back out on Jack Lake we ran across another canoe trying to negotiate (what appeared to be) a washed out beaver dam at the southern pinch point on the lake. We were able to paddle right over without any issues, and exchanged greetings with the Father/Son tandem who also kindly informed us that both sites on Jack were vacant.

Once past the pinch point, the lake opened up to reveal multiple shoreline rock formations, as well as a few small islands and less densely forested areas. This was a beautiful contrast to the thickly forested shorelines of the preceding chain of lakes we’d just paddled through.

On the map, the peninsula site looked inviting. Although, once there, Vickie didn’t like the looks of the southern landing, so we paddled around to the northern side with hopes of a more accommodating access. Those hopes were soon dashed, so we returned to the south side & climbed out for a closer inspection. A stone staircase led the way up to an elevated large grassy site providing somewhat obstructed vistas to the north & south (where there were a few small islands). The fire grate was situated facing west, which didn’t afford a view of the lake. But, overall, we felt it was an above average site and, more importantly, we knew we wouldn’t do any better unless we committed to traveling all the way to South Temperance Lake.

As we began setting up camp, it was our good fortune to find a fuzzy little caterpillar crawling through the grassy jungle floor of camp. This provided just enough of a diversion to keep Aurora occupied while I got busy setting up the tarp & hammocks, and Vickie went about getting the tent setup and situated. 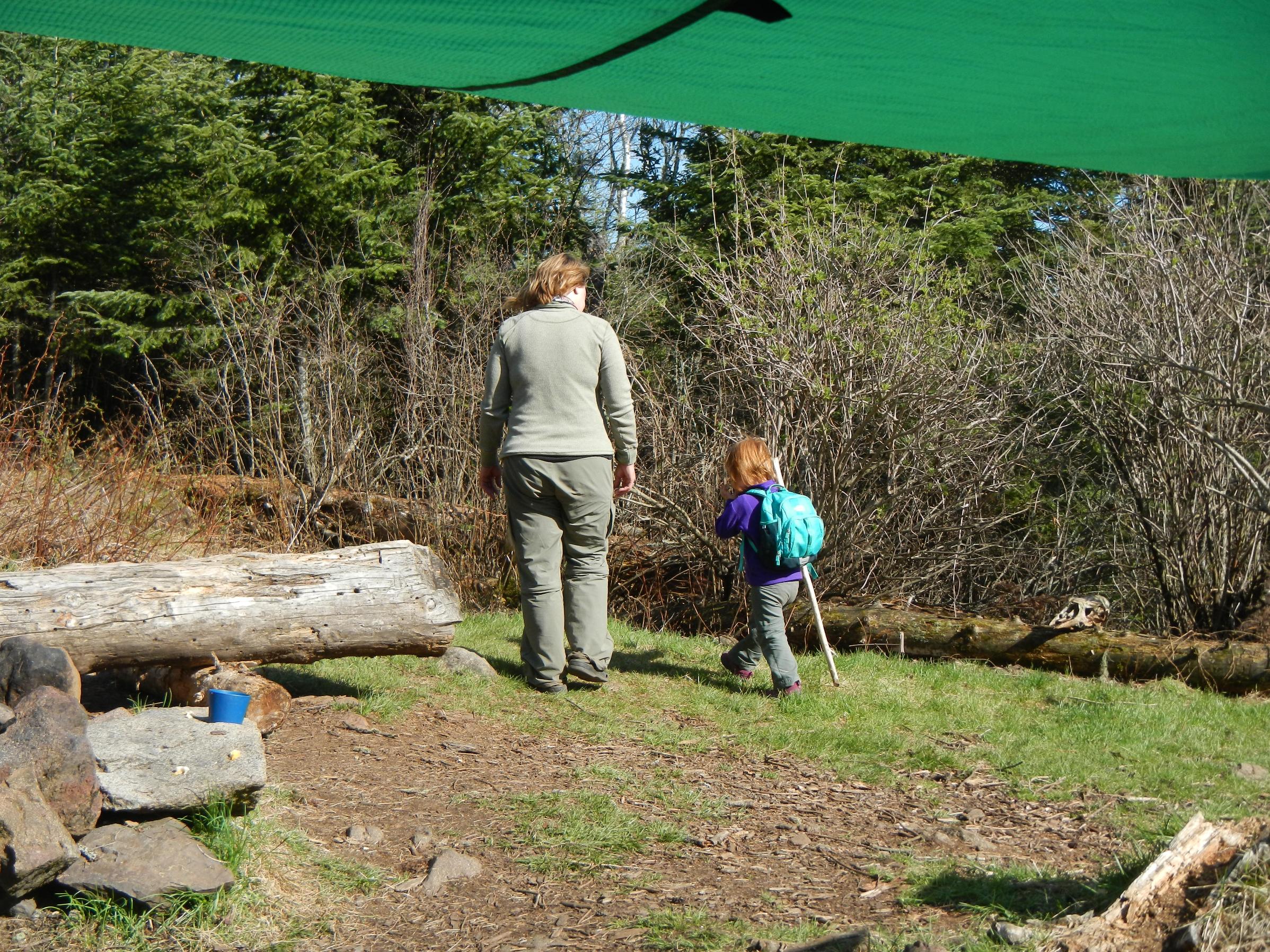 Once camp was up, it was still too early for supper. So, while I snuck away to the hammock, Vickie took Aurora out to explore the perimeter of the campsite. Prior to departing, Aurora had found a perfect walking stick down by the landing to aide her in this endeavor. Of course, donning her backpack was an essential requirement for embarking on such an adventure as well.


There was a pleasant cooling breeze recurrently easing its way through camp as I lay in the hammock - half conscious, lost in relaxing, hopeful thoughts on how the remainder of the trip might go. Sometime later, I was fully aroused when Vickie informed me that Aurora had something she needed to show me. In their exploration of the lakeshore areas just outside of camp, they had stumbled across an old moose skull which Aurora was now proudly displaying. Quite naturally photographs were taken……. MANY photographs! As this would become a daily, and nightly, ritual for the remainder of the trip. Pushing the capacity limits on our memory cards to new all-time highs 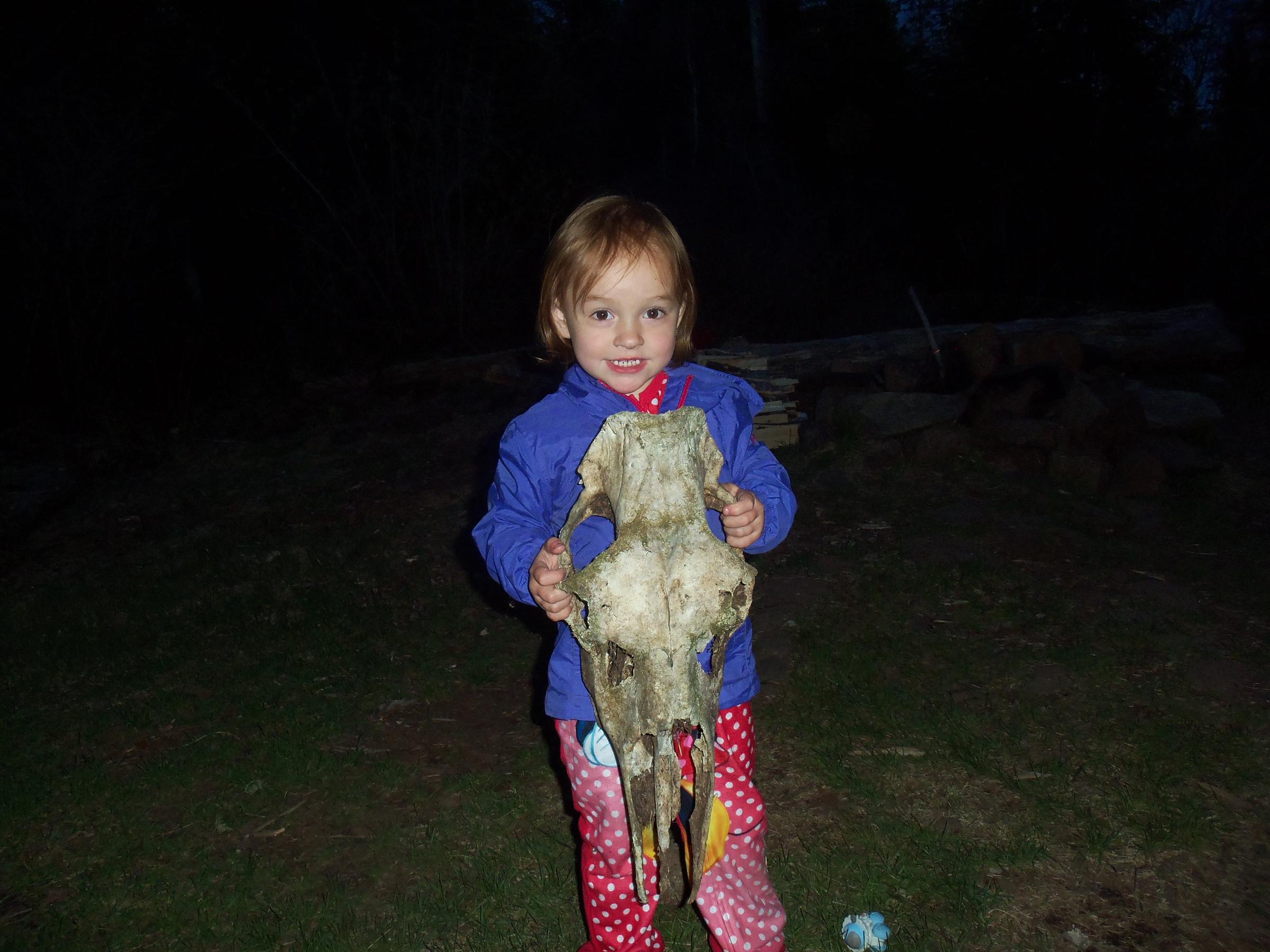 It was now nearing supper time. So I crawled out of the hammock and got a fire started. While waiting for a nice bed of coals to materialize, I processed some more firewood. Under the shady sanctuary of the CCS tarp, Aurora contentedly entertained herself while Vickie prepared the potatoes to delectably complement our rib eye steaks.

After supper, with satisfyingly full bellies, we lounged under the tarp totally absorbing the languid pleasures that only canoe country can provide. I might also add that this was done in a bug free environment. Things had gone well, and it had been a very good day. So, hitting the sacks with redoubled optimism, we fell fast asleep looking forward to more of the same tomorrow.