Alarm went off at 6am but we both ignored getting up for another hour and a half. We were feeling the pain of that mile long portage! After waking and making coffee I made us breakfast which consisted of bacon and over medium eggs. This would be our last non-dried meal of the trip. It hit the SPOT! We cleaned up camp, packed up and hit the water by 10:00. I wasn't upset at getting a late start. We wanted to move at an easy pace and we were both happy with where we were.

As we paddled away from our site we entered a larger stretch of water heading North just before Wheelbarrow Falls. As we paddled Northward we saw ominous clouds moving our direction and heard distant thunder. A light rain started to descend. I could tell it was blowing off of the larger storm moving towards us. I opted to stop short of the Wheelbarrow Falls portage because I didn't want to be on this big stretch of open water if that storm came. We pulled off on a long peninsula and covered everything with the canoe and prepared. As we waited we made lunch of Salami & Mustard on Pita with a handful of trail mix.

The storm never hit us, it blew by to the West, so we continued towards the Wheelbarrow falls portage. As we approached I was having a hard time locating the portage visually. I saw what appeared to be a relatively flat large rock which was "near" where I thought the portage was. As we got close I realized it wasn't, but wanted to stop just for a minute to get my bearings and make sure we were not going to paddle over the falls :) I went to exit the canoe and place one foot on the rock outside and when I shifted my weight to that side my foot slipped and I fell. I instinctively grabbed the closest thing which was the side of the canoe. I successfully dumped my partner and almost all of our gear! Fortunately there was enough rock below the canoe to keep us from going under. We were able to save the canoe from totally flipping and thankfully nothing fell out besides us. But the canoe was pretty full of water and everything in it was soaked. My partner was NOT happy! I felt terrible, as I am usually pretty good on my feet. We had to unload the canoe, dump out all the water, reload it and get in. Had this happened 2 feet farther from shore it may have been a LOT worse than it was. We were absolutely soaked, as was our gear, but we were safe.

By now, after all the commotion, another canoe had approached and I saw where the portage was and we headed that direction which was just a hundred feet closer to the falls. This portage wasn't bad. Half way through I got a very strong smell of pine. It smelled so good! It filled the air everywhere along the entire remainder of the portage. Once I got to the end I saw why...there was a very large, newly downed tree right at the portage into the falls. It was fresh and smelled amazing.

We entered the water again below Wheelbarrow Falls and continued on the river. We got to the portage around lower Basswood Falls which was very easy to see. It was also a little busy. A couple larger groups of younger guys, maybe youth groups. The portage was shallow and sandy like a beach. It was a nice easy place to land thankfully. We portaged around the falls and put in at the bottom ready to continue on. As we paddled away from and marveled at the falls, we both noticed that the campsite up on the small cliff side facing the falls appeared to be unoccupied. Even though it was still a little early in the day we were absolutely ecstatic to be able to take this site! We pulled the canoe over to the site entrance and I walked up just to make sure no one was there. Sure enough, it was ours! I called Carly up to see the view and we both got lost in the sheer marvelous beauty. One of Carly's biggest hopes was to camp below the falls and we just hit the jackpot. We were so happy that we decided we would layover here so we could spend the extra time in this extraordinary place! I will never forget the time here. The constant powerful sound of the falls just never ending as we looked around at some of the most beautiful scenery we had ever been able to be part of. We saw an Eagle that night fly nearby and perch on a tree for hours just watching, sharpening his claws. We stayed up late marveling at the solitude and sound of nature over a campfire that slowly dimmed until the stars began to really show. We had sore necks the next morning because we probably stood and starred for more than an hour with no break. We saw a small shooting star and counted how many satellites we could see. The sky was never so alive! As the fire died, the thought of falling asleep to the sound of the falls was very appealing, as was the thought of no agenda the next day, just relax and explore. Our route plan was supposed to take us through Thursday and Friday Bay down through Gun, but since we found this spot we decided to layover and take Horse River back. 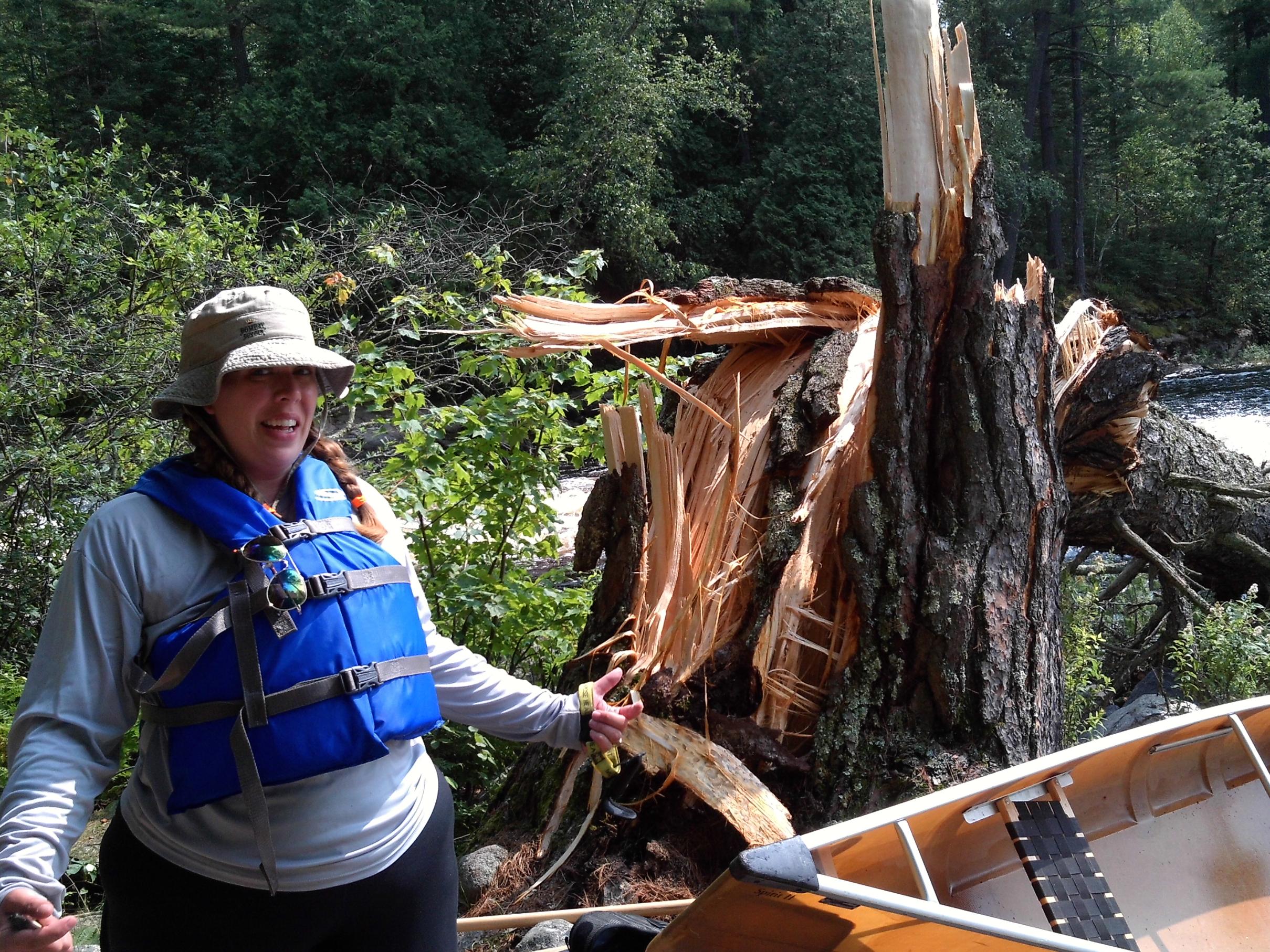 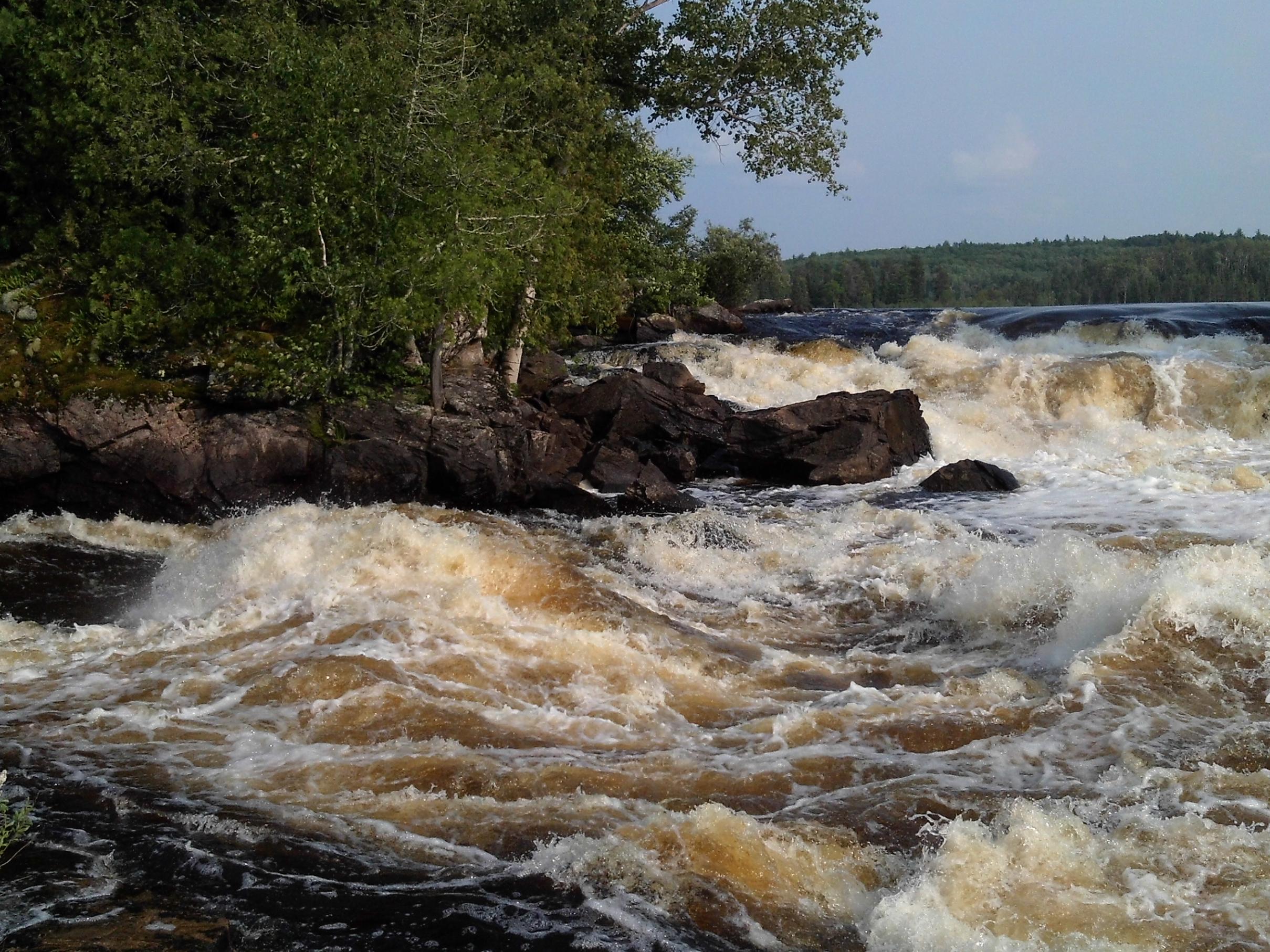 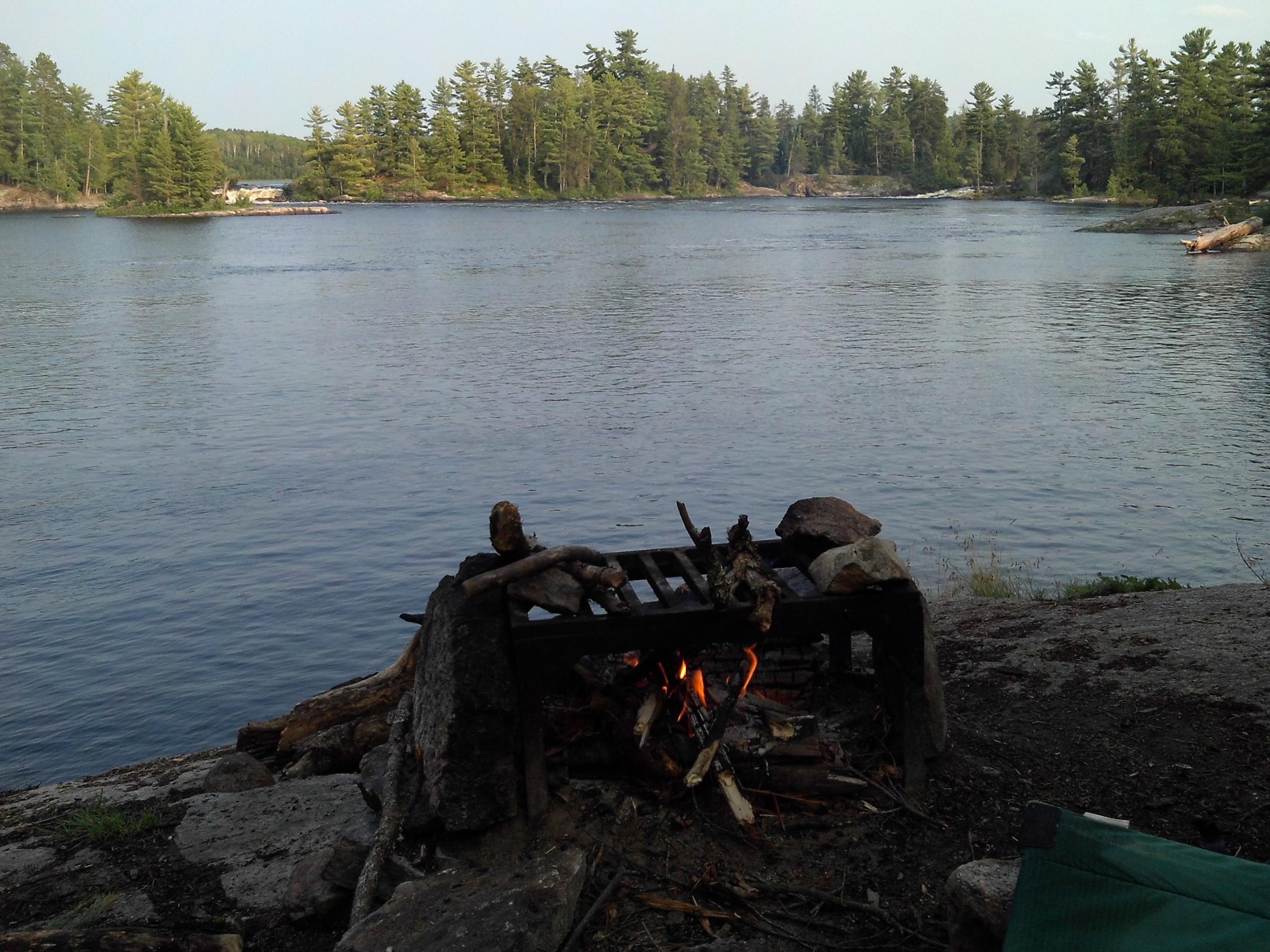