We got an early start up the Echo Trail to EP 16, because this year we stayed at one of the bunkhouses on Fenske Lake. Special thanks to Echo Trail Outfitters for letting us get our permits on Tuesday night when we got up there to allow us the early start! So at 6:30am we started heading up the rest of the Echo in a cold, windy, and rainy morning. We all had been watching the weather prior to heading up and knew exactly what we were in store for that first day. We wasted no time getting down the first portage. I saw a pine marten on the trail in front of me on the first portage! Of course, he was no where to be found once I got the camera out. That first portage seems so long when you are coming out, but this morning it was a perfect warm-up to the cool morning start. The first portage: 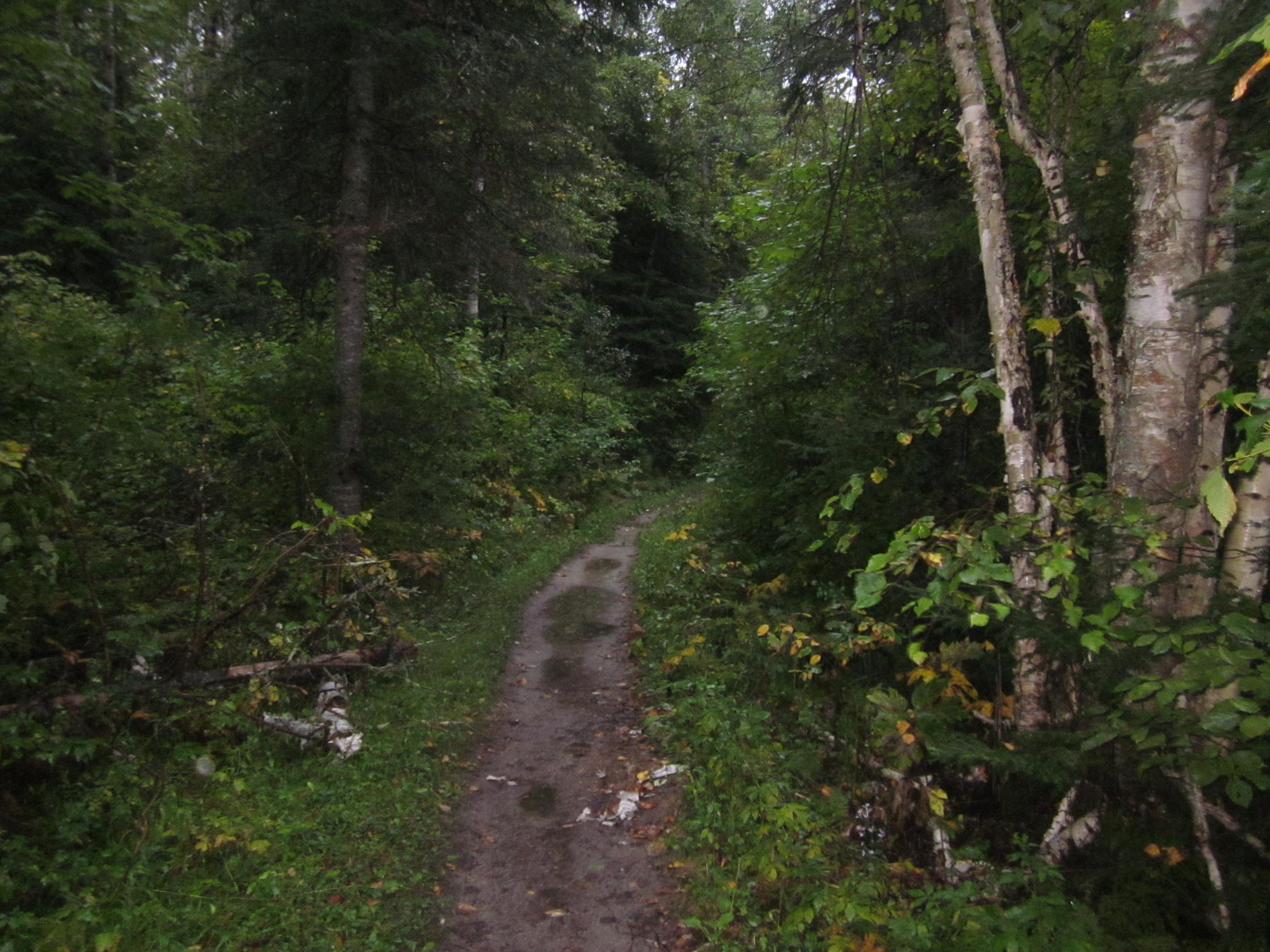 We made our way through the river in the woods. I really observed this on the way out, as it seems the woods just swallows up the Moose River as it gets smaller and narrower. Well, we were heading North for now, portaging through very slimy and muddy portages one by one. We realized just how low the river was when we got to the new sandbar portage. The river stays shallow FOREVER after the sandbar. I took the opportunity for a brief photo op here: 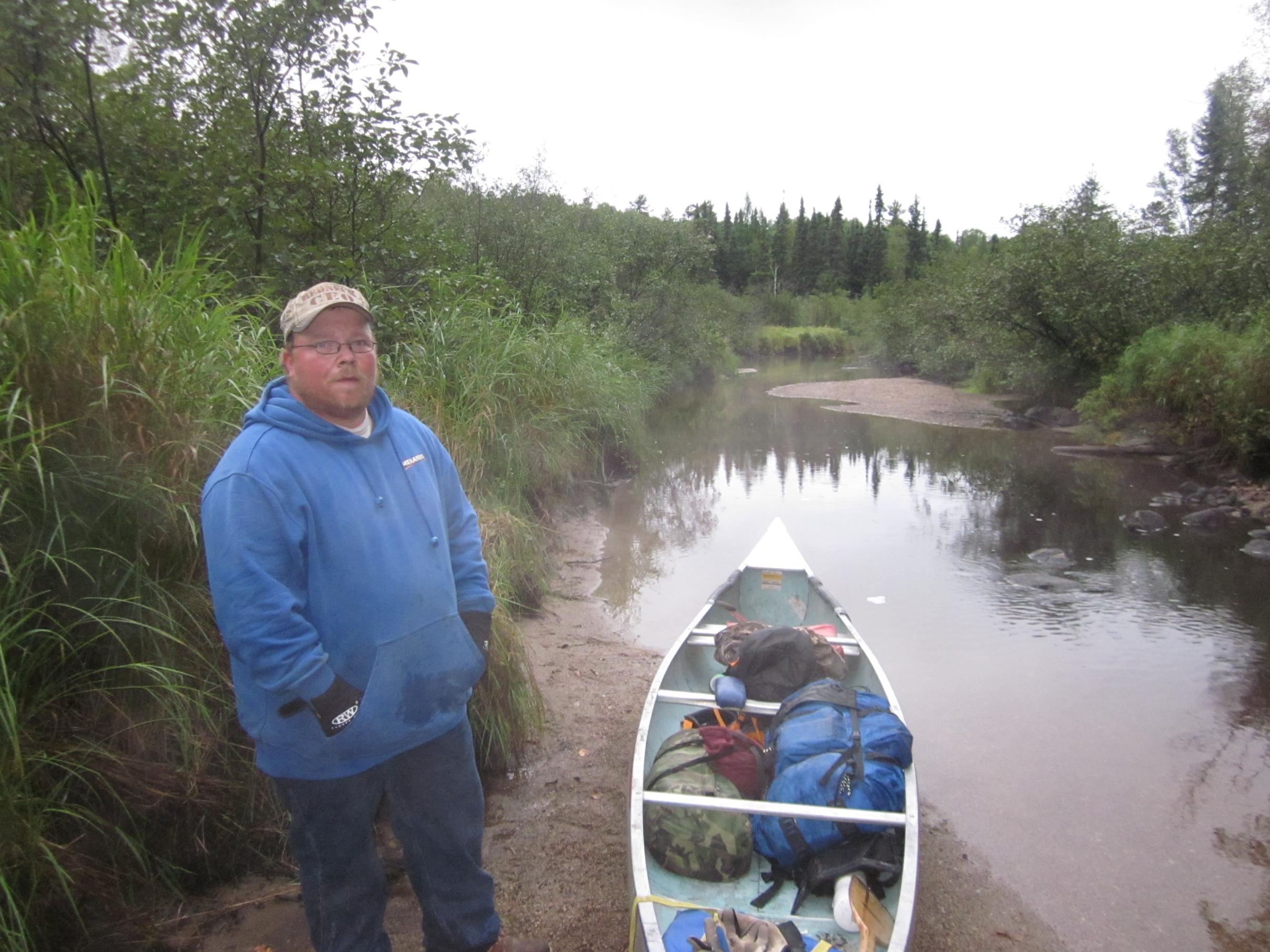 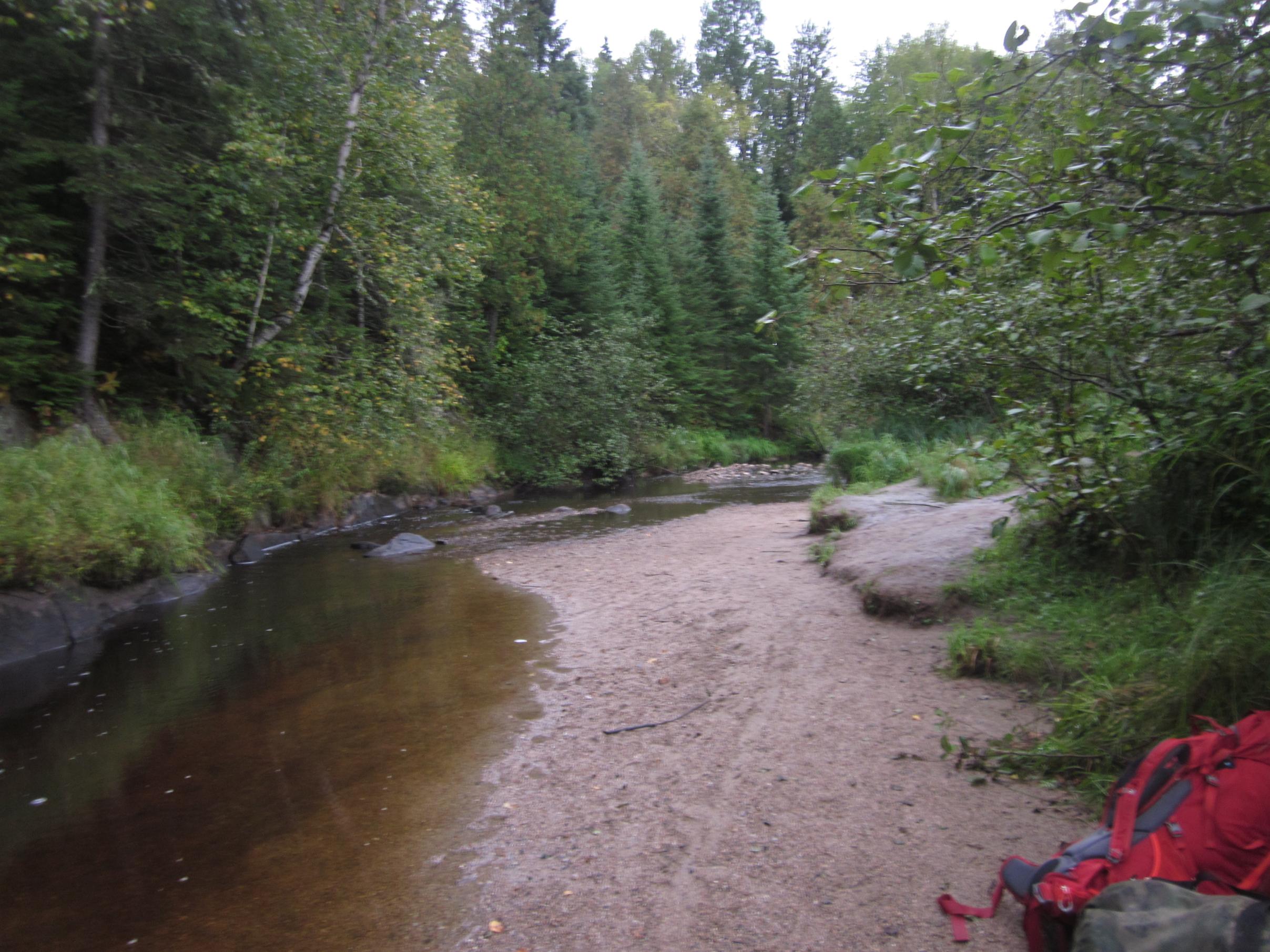 As we made our way to Nina Moose Lake, we knew we were in for a tough day of traveling. We ran into our first travelers heading home, and they all warned how terrible the wind was on Agnes already this day. We crossed Nina Moose slowy and were happy to get to the sandbar on the north shore. We always stop here for a snack break. We gobbled up some beef sticks and granola bars and got back into the canoes. As we approached Lake Agnes, the wind intensified. We neared the mouth of the river and saw 3-4 foot whitecaps crashing through the wildrice. My dad quickly decided we would pull up on the south shore and make a game plane. We just sat and watched as the wind just screamed across the lake. 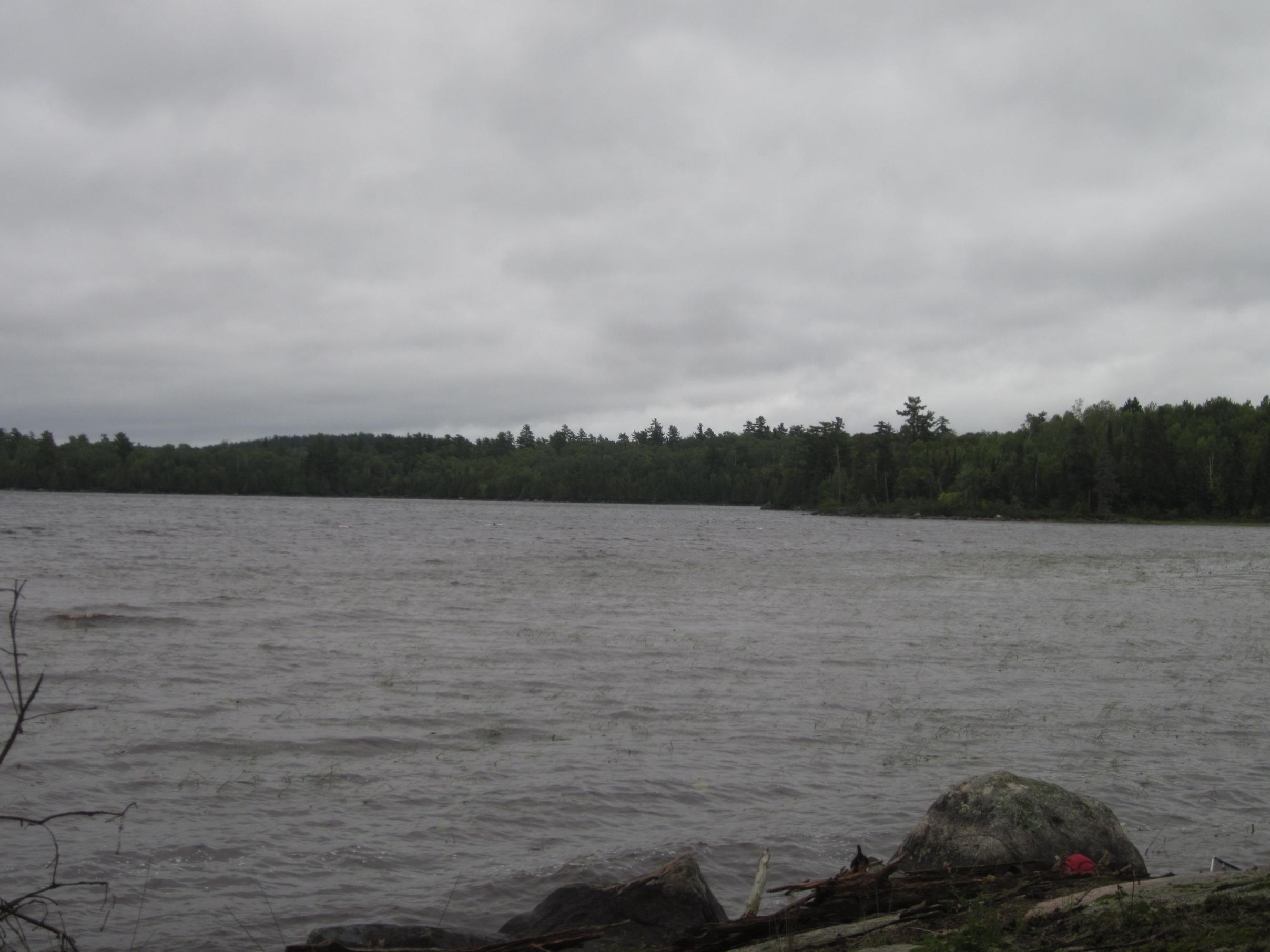 After a bit we decided to find a campsite on the south end of the lake, just in case the wind wasn't going to let down. We carefully made our way to the campsite in the southwest corner of the lake. The waves were crashing down on us broadside, so we moved very slowly towards the site. We got to camp and unloaded the canoes. We weren't quite ready to commit to this site yet, as it was early in the day and far from where we wanted to be. As we looked out on the lake, we soon saw another set of travelers, who at first appeared to be taking on the waves and heading across the lake. Their canoes were getting tossed way up and down, and we soon thought we would have to go out on a rescue mission. They soon headed for the point, home of another campsite. It was shortly after this we decided to just setup camp and stay here for the evening. After camp was set up, we decided to go out and do a little fishing in the bay. Our hopes were not high with the cold front moving in with the rain and wind... We were fortunate to catch a couple of northerns and perch. A shot of the first fish of the trip: 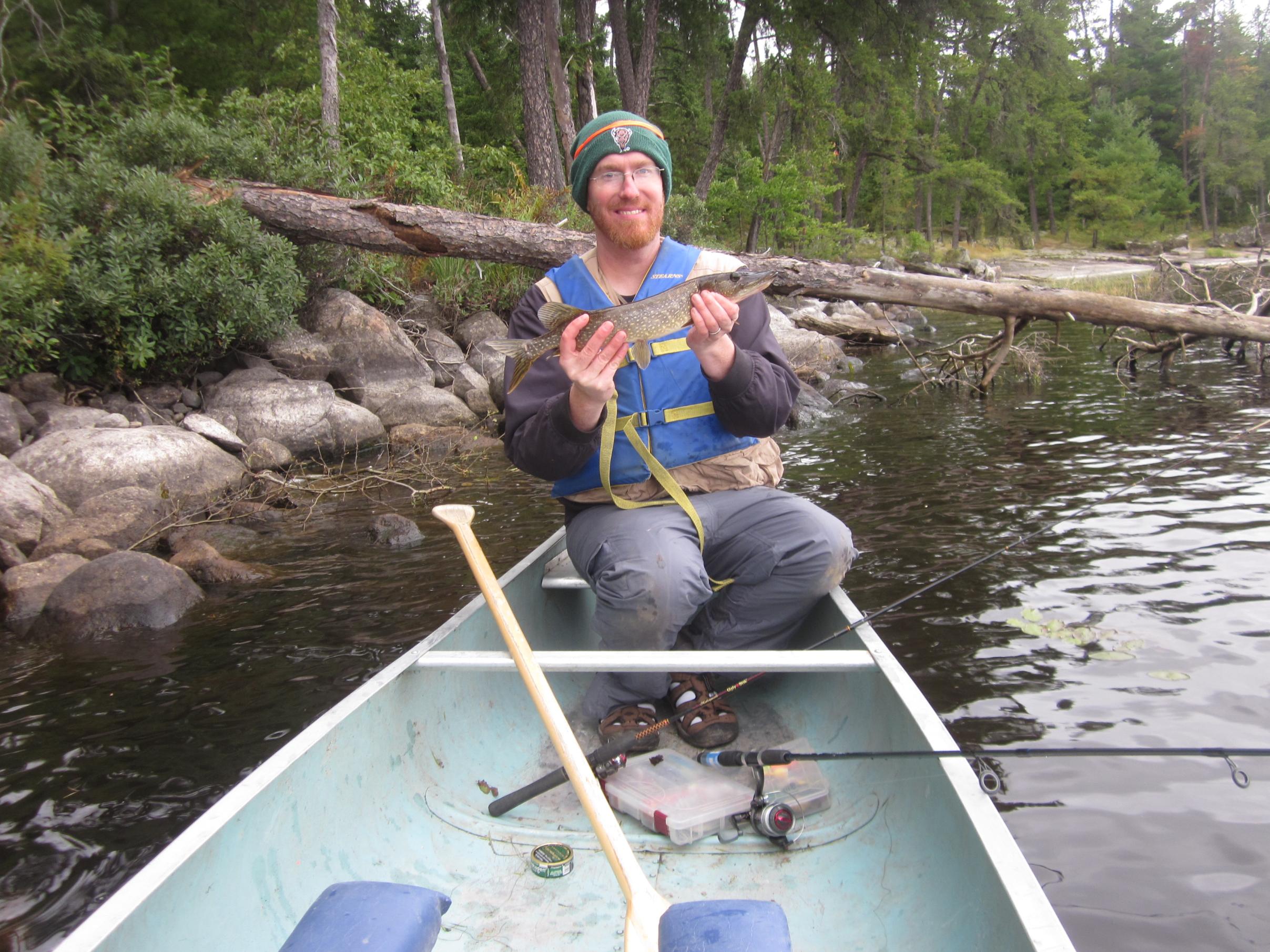 We then went back to camp and got dinner ready. We all devoured our steaks and instant potatoes as we hoped tomorrow would bring calmer waters. After the evening chores were done a few of us decided to give the leeches we brought along a shot. I was rewarded by catching 2 "eater-sized" walleyes that I kept for a meal the next day. I had just returned to fishing after hooking the second walleye on the metal stringer that was tied onto the canoe when I heard both the stringer move and even the canoe move on the rocks. Now it was getting dark out, so I flipped on my headlamp and headed over to the canoe. I saw the stringer pulled tight, and I almost already knew what was on the other end... As I gave the stringer a tug a HUGE snapping turtle appeared out of the depths with my most recent walleye in his mouth. i turned around to find the canoe paddle and I gave him a smack on the back of the head. He finally let go and swam off. At that point I knew we would have to filet out the fish on the stringer. We cleaned the fish, put them in a ziplock, then sunk them in one of our mesh tent bags. Soon after we all retired to the tent and enjoyed our first night of sleep.