Fly-in to Haven in Woodland Caribou
by Sylbill

Trip Type: Paddling Canoe
Entry Date: 08/10/2014
Entry & Exit Point: Other
Number of Days: 7
Group Size: 4
Trip Introduction:
Discuss Trip: View Discussion Thread (8 messages)
Report
Planning for our Woodland Caribou trip started in January with a call to Harlan at Red Lake Outfitters. After swapping a couple emails to find out what we were looking for, Harlan recommended an itinerary for our early August trip. Our group consists of four guys from the Detroit area who are all a few years on both sides of 60, but we are all experienced trippers. Our plan was to fly into Haven Lake and paddle to the west end of Red Lake where we would be picked up by Harlan’s new boat shuttle. Harlan took care of making all the necessary reservations and everything worked great.
We left southeast Michigan about 7PM on Friday, August 8, 2014. We were expecting to arrive in Red Lake before 2PM on Saturday. With the shortage of road construction and no line at Customs coming into Canada, we drove all night and arrived in Red Lake around 11 AM. We stopped by Red Lake Outfitters to get our permits, maps and fishing licenses before checking into the Super 8 motel in Red Lake. Harlan also made that reservation which was significantly cheaper than the best price available on the internet. We were able to check in early at the Super 8 and used their conference room to repack all of our gear.
On Sunday, Aug. 10, we arrived at the dock for Viking Outposts at 8AM. We loaded up two planes with our canoes and gear and took off for Haven Lake. It was an overcast day. After circling the lake a few times the pilot set us down. We unloaded the canoes and gear and were on our way. We caught and released some walleye before moving on. The south end of Haven Lake and the surrounding area suffered from a fire several years ago. While this did not provide many attractive campsites, it did make for interesting scenery. The portage from Haven to Gulch should have been simple. My normal practice is to make the first portage with the packs and the second pass with the canoe. For some reason I took the canoe on the first pass. Because of the fire, and the rocky terrain, the portage is marked with stone cairns and plastic ribbon tied to some of the small bushes or trees. They are spaced far apart in areas where you can’t see them and it is easy to get off the main path. I managed to do that on the first portage. It was a lot of work to find and get back on the main trail. It is hard to back-up in thick brush or trees with a canoe for a hat. The portages between Gulch, Jigsaw and into Wrist lakes were no problem. Jigsaw is appropriately named. The GPS was a big help to keep us going in the right direction on that island infested lake. We camped on a site on the largest island in Wrist Lake. Dinner was the traditional first night steaks cooked over a wood fire. It rained about 4AM for a half hour but was clear by daybreak. 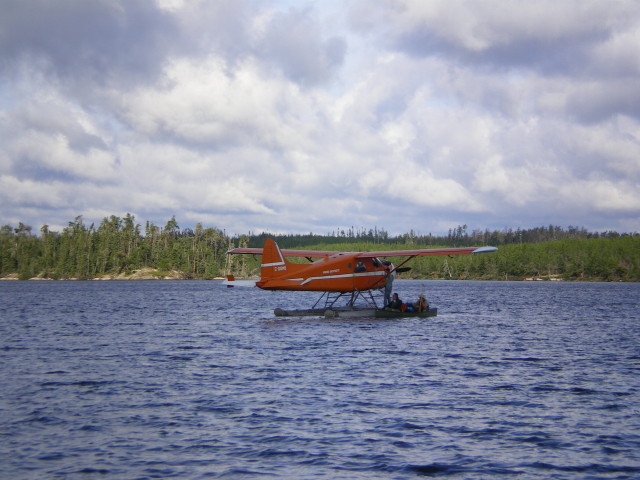 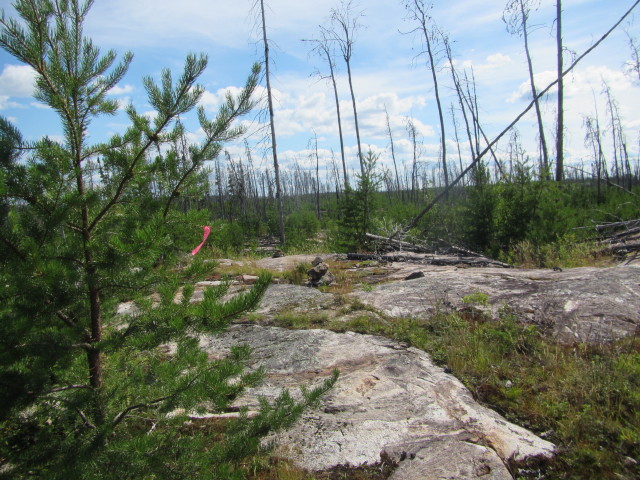 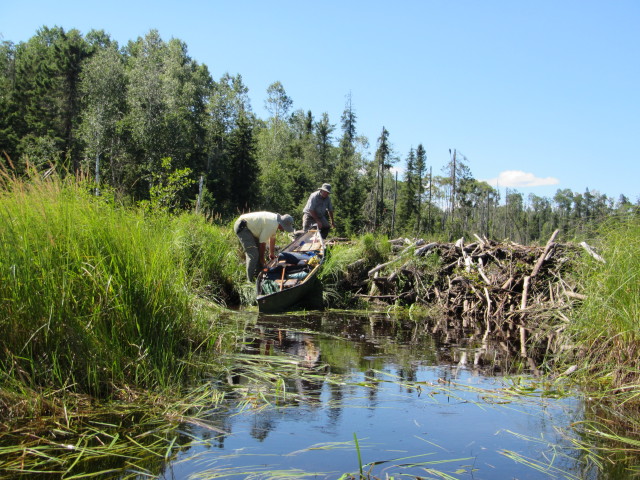 On Monday, Aug 11, we packed up and moved on going through Streak, Amber, Nutria and into Mexican Hat. These portages were OK except the last 40 yards going into Mexican Hat was a mud bog. The only way to avoid the mud when portaging with a canoe was to balance the canoe with one hand and use your other hand to grab tree trunks as you tip toe through the rocks and logs. After paddling about 1.2 miles into Mexican Hat, we came to a beaver dam that required lifting the canoes down about three or four feet. We paddled on to the north end of Mexican Hat hoping to grab the nice campsite on the west side of the north end of the lake. It was in use however so we made do with a site on the east side of the north end. It was crowded with four tents, but it worked fine. We caught some walleye and had a fried fish dinner.
Tuesday, Aug. 12, we packed up and headed into Glenn. Our plan was to do a layover on Glenn. We had a head wind, but it was not too bad. We started looking for campsites early and picked one just to the south of the entrance into Hansen Lake. We set up camp, washed out some clothes and hung them out to dry and went fishing. We caught enough walleye for dinner along the walls just to the south of the campsite.
Wednesday, Aug. 13, was our layover day, so we started the day with bacon and eggs. We tried the Broadbent dry cured bacon for the first time and must say it was a winner. We then portaged into Hansen Lake to take a look at the pictographs on the west arm of Hansen. We were disappointed in the pictographs and almost missed them. We trolled some Mepps spinners while we were paddling in Hansen, but did not get any bites. Since the wind was picking up, we decided to try our luck in the passage between Hansen and Glenn. This was a good idea as we caught both walleye and pike at the base of both sets of rapids between the two lakes. We were wondering if there would be much noise or boat traffic from the fish camp that is at the entrance from Glenn. This turned out not to be a problem as there was no one in sight at the fish camp. We did see one other canoe on Hansen. 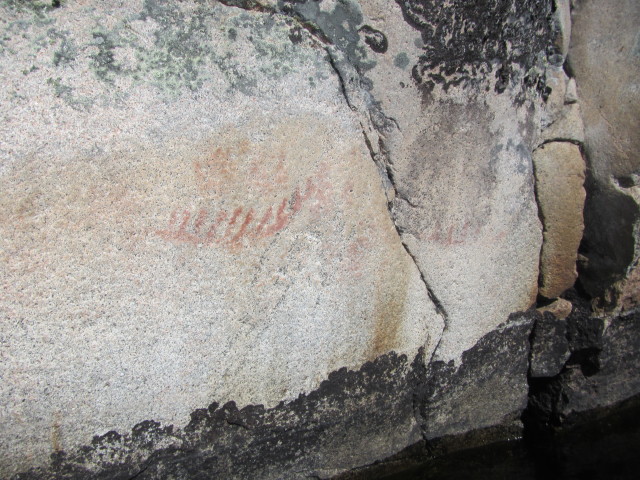 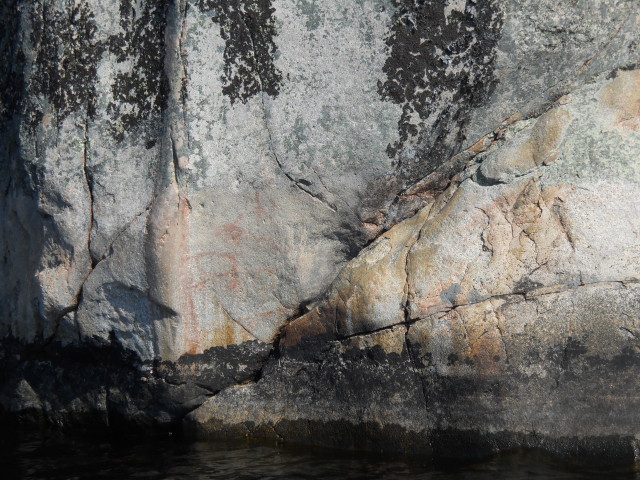 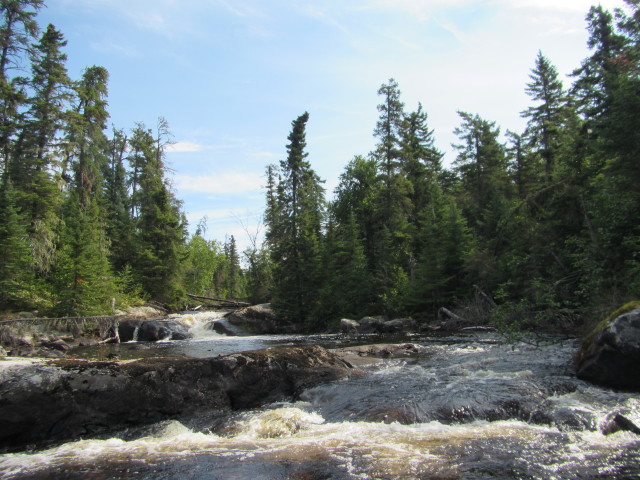 On Thursday we packed up and went up Glenn, through Optic, Edgar, Stuart, and into Telescope. We camped on the western site on the island in the center of Telescope. It was a nice site and had a fire pit with a nice grid on it. About a half hour after we set up, another canoe came by looking for the site with the “great kitchen”. We didn’t do much fishing today, but did catch a good size pike which we boiled and added to some Bear Creek clam chowder soup. That was also a very good meal.
Friday would be our last full day before getting picked up on Saturday, so we wanted to get close to our takeout spot. So we packed up camp and lifted our way over the beaver dam at the north exit from Telescope. We then paddled through Embryo, Upper Hatchett, Hatchett and into Douglas about 3PM. There were supposed to be two campsites just after the portage into Douglas, but we only saw one. It was empty so we took it. As soon as we set up the tents, it rained hard for about 30 minutes. We climbed into the tents and waited for it to blow over. We started a fire to dry some things out and went out fishing. We were planning on a walleye dinner but only caught a bunch of hammer handle pike. We did see several motor boats on this lake. We decided to finish off the food we brought with us, including the last package of bacon. We also polished off the last of the bourbon, scotch and Crown Royale we had brought along.
Saturday, Aug. 16, we packed up camp for the last time. Fortunately, we were packing away dry tents. We paddled up Douglas Lake to the portage over to Red Lake. It is an easy 800 meter portage to Trout Bay. At about 10:45 we heard a boat and sure enough Harlan had arrived to return us to Red Lake. There was a strong easterly wind and we were certainly glad we optioned for the shuttle boat. One we were back in Red Lake, we went to the community center and took showers. Then we had lunch and headed back to Michigan. Passing through US Customs is no problem at 6 AM on Sunday morning. We had breakfast in St. Ignace and were home in the early afternoon.
In summary, it was a great trip. There was little rain. Only one portage was really muddy. We ate well and there were very few bugs. I did not use any bug repellant all week. If I had it to do over again, I would probably make the trip a shorter distance and add another layover day to give us more time for fishing. We did not catch record amounts of fish, but we did catch fish most of the times we tried. We did not see much wildlife or people and the terrain was varied and interesting. 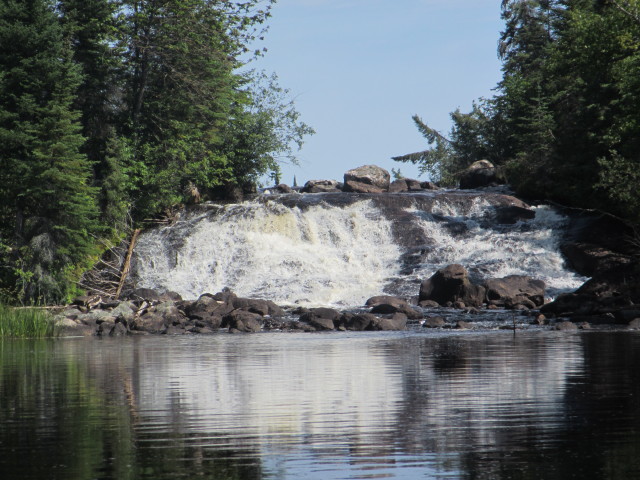 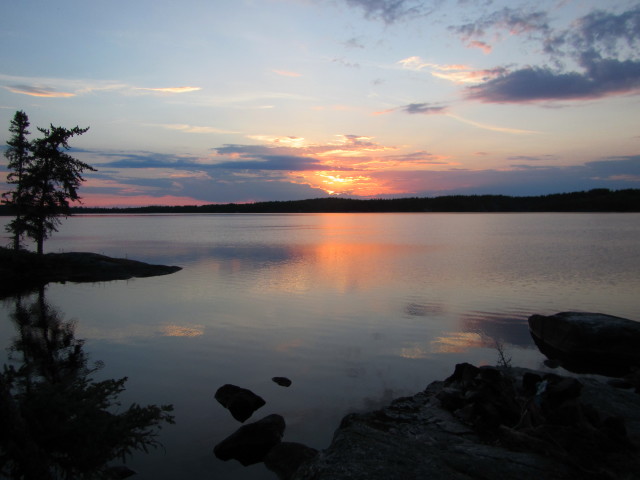 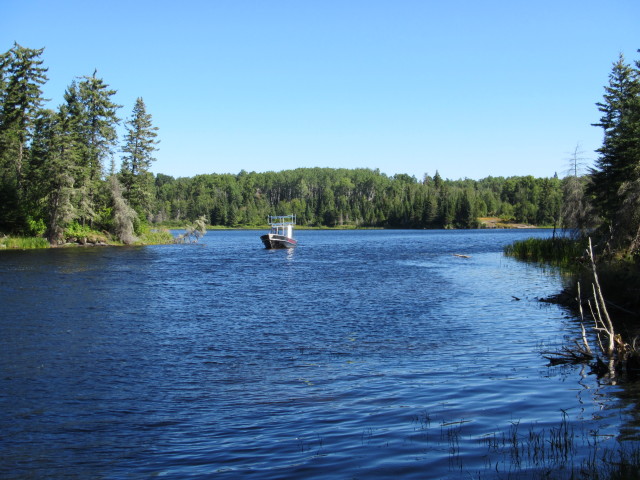