Trip Type: Paddling Canoe
Entry Date: 06/05/2014
Entry & Exit Point: Snake River (EP 84)
Number of Days: 3
Group Size: 3
Trip Introduction:
A trip of high expectations - valuable lessons learned.
Discuss Trip: View Discussion Thread (2 messages)
Day 1 of 3
Thursday, June 05, 2014 Headed out at 5 am from Pine City. Stopped for Denny's $50 breakfast in Duluth, then on to Maple Grove Bait for our permit and leeches. So foolishly I'd been just using Google maps for navigating up Hwy 1. Missed the Tomahawk Rd and drove all the way to Gabbro. I had to fish my Beymer book out as he has detailed directions turn by forest road turn. Three miles to go, hauling butt over a small hill and I suddenly have to swerve around a huge pothole and I'm off the road in boggy ditch. Stuck to the frame in my 2wd Dakota! Yelled a bunch, took some deep breath's and we started unloading...everything. My wife had suggested I throw in my homemade portage wheels. It was apparent we now had a four mile portage ahead of us.


While loading the canoe on the road two vehicles drove by w/o stopping. I was writing a note about our intent when a truck and trailer stopped. Chris, our Angel, rolled his window down, smiled and said, "Oww this is gonna cost you!" We unhooked his trailer, used the log chain I wisely packed and yanked it out. Disaster averted! Thank you stranger. So we were arriving around ten am at the portage parking lot. Marked incorrectly at 198 rods its actually about 270. A beautiful hike on the old logging road for the first 200 rods then a boulder path down to the Snake River. It took a couple hrs carrying and leap frogging. I had 55 and 50 lbs in the two Kondos packs so I had to carry the heavier the pack and the over accessorized Grumman the whole portage. Loaded and ready to push off we put on a brave smile for the camera. Now you would think I'd have the map out as there are three short portages in the first couple miles. "What a swampy campsite Dad!" Said by my 12 yr old son as we pass the first portage! Well we proved ourselves capable under pressure. The boys bog hopped to the portage trail and we lined the canoe backwards through the Rapids. Turned out there was a Spruce uprooted blocking the portage trail anyways. Anyone who has been down these slow creeks in the BWCA understands the intimacy of being able the brush both shorelines yet pass through silently. Just trying to push on quickly we dipped and drank the most awesome cold mineral water I've ever had. We actually filled a bottle on the way out to take home just to be sure it was that good. Through the winding snake channel of the confluence of Snake and Isabella. The western sky had continually clouded up throughout the afternoon. As we entered the southern end of Bald Eagle Lake we started the long stares for campsite availability. Up the west shore as all three taken on the east. The wind really started to blow so we took the site with the huge rock wall built around the fire grate area.

The sky got darker yet as we strung up my 10x12 poly tarp that I didn't know how to hang. With assistance of a center pole the rain didn't pool to bad. Yes, it wasn't two minutes after getting the tent up and gear under tarp that it opened up for a ten minute shower.
The site was obviously used once around fishing opener and all the garbage still there. First business was cleaning up firepit and around camp. As I this was to be a fishing intro trip for son and son2, I got some pole strung up and in the water. After much bushwacking for firewood, I got a cooking fire goinc despite wet wood. I fried up hamburgers in my small cast iron skillet. They were pretty dry. We were thirsty too. The lake was too windy to launch out to fill water bag so we filled from shore. It looked like pee. We had to scrub the ceramic filter after each bottle. We were drinking the filtered water as fast as we could pump it. In hindsight boiling would have caught us up but I wasn't up on all the alternative filtering methods then.
. As dark came and the fire was dying, the Mosquitos really moved in. They deserve proper noun status! Guess my all black clothing and campfire smoke actually attracts them. So into the tent after securing a bear bag in the dark. Who forgot the ear plugs??? You hear each one individually then they swarm every couple minutes. Thankfully the wind picked up. Or not - The tarp center pole fell over with all the fishing poles and cups attached. The boys though Mr Bear was right outside the tent! Picked everything up and tried to sleep some, waking as water pooled then dumped off the cheap tarp. Spooky sounds in the wildness. Lol 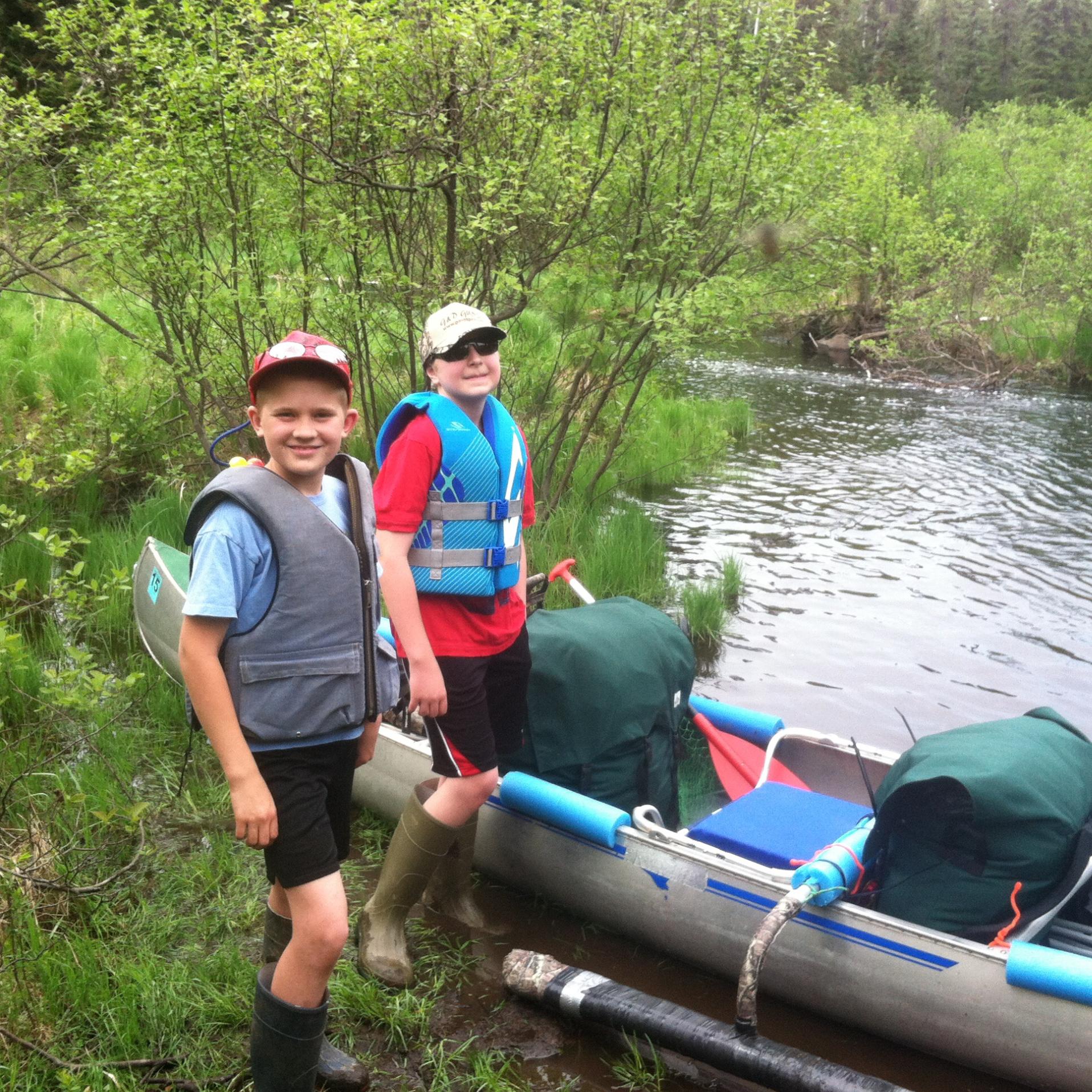 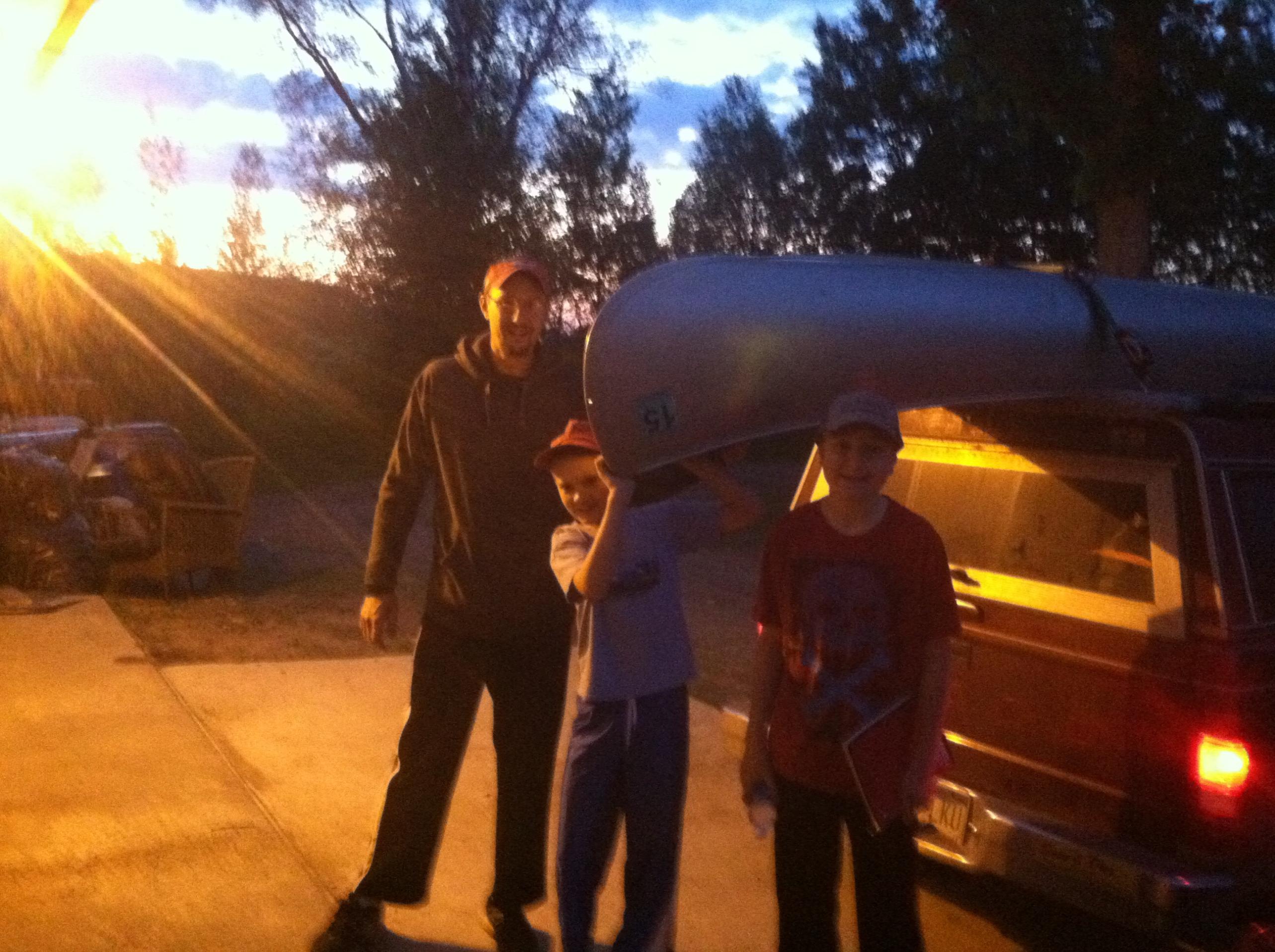