First timers - S. Kawishiwi to a Gabbro Base Camp
by Grier000

Trip Type: Paddling Canoe
Entry Date: 09/04/2013
Entry Point: South Kawishiwi River (EP 32)
Exit Point: Little Gabbro Lake (EP 33)
Number of Days: 4
Group Size: 6
Trip Introduction:
Six rookies looking to find out what the BWCA is all about, and I'd say we found it. I'm hooked.
Discuss Trip: View Discussion Thread (12 messages)
Report
Here starts my very first BWCA trip. It also promises to be the beginning of a long line of annual trips up here. There are 6 of us friends on this trip. We all live in the twin cities, and after a few months of planning, reading, and lots of shopping, we started the trek up north.

We arrived in Ely by mid-afternoon and checked into our hotel “The Adventure Inn”. Pretty nice accommodations with 3 queen sized beds. We hit a few outfitters in Ely, looking for the last essentials, then to Zups Market for some last minute snacks. We hit up the Ely Steakhouse for some good food and a few beers, and then it was off to Piragis Outfitters to get our permits. Drew at Piragis was very nice and helpful. He talked to us about our route and gave us a couple pointers on good fishing lakes. Now it’s time for bed because we have to get up hella early. 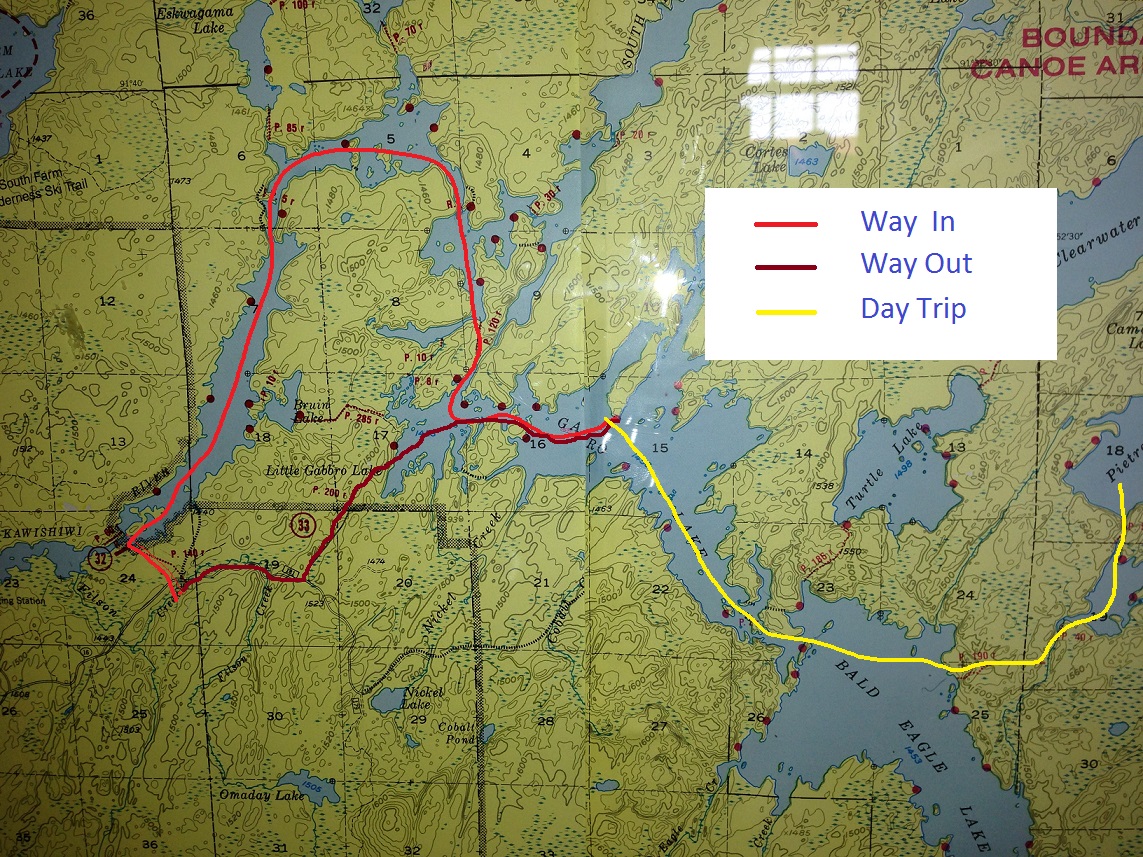 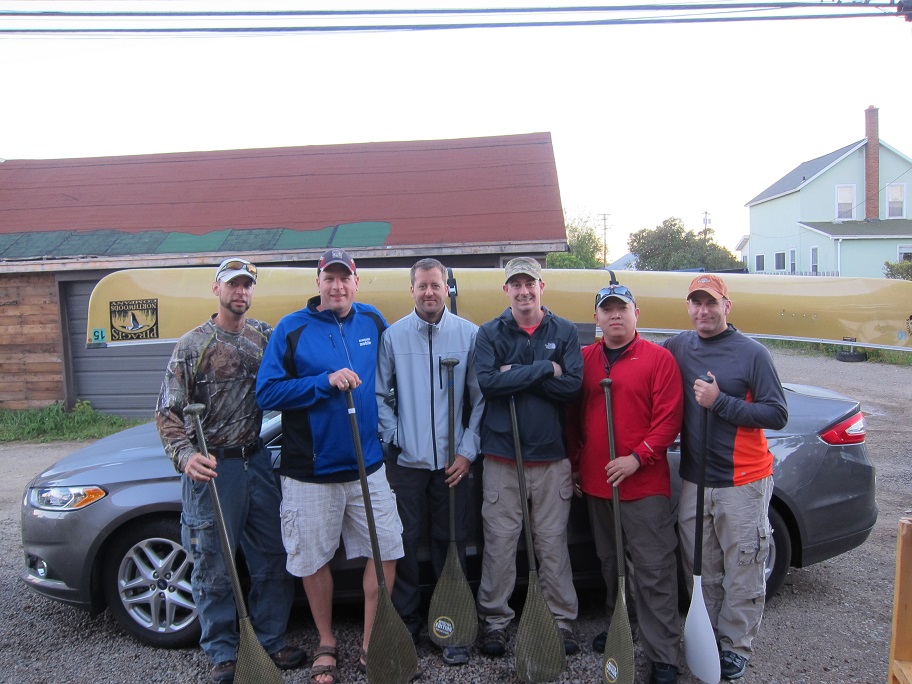 We woke up at 6am, packed up all the gear and started our day with some breakfast at Britton’s Café. Then we got our canoes from Piragis, and we were off. We drove for about 20 minutes to get to Entry Point 32 – South Kawishiwi River, and there were already a few cars there.

We quickly found out that we were all over-packers, and our food pack was out of control. Each guy had a personal pack, most probably over 50 lbs, then an even heavier food pack, a bunch of extra heavy accessories like a monster tarp, a small folding table, and lots of cooking supplies, plus 3 Souris River Kevlar canoes. As we entered our first portage, another decent-sized group of older guys showed up and were right behind us. The first portage was a doozy – 147 rods, but since we were new to this, we didn’t quite know what to expect. We initially thought we would double portage it, but last minute decided we would try to do it in one. Having a 50 lb pack on my back and a 45 lb canoe on my shoulders, I was struggling a little. My first portage was pretty tough for me, lots of rocks and roots and ups and downs. (Note to self: go to the gym once in a while before next year’s trip). But it’s all worth it when the trees start to clear and you first see the sparkling clean water. This is what it’s all about! 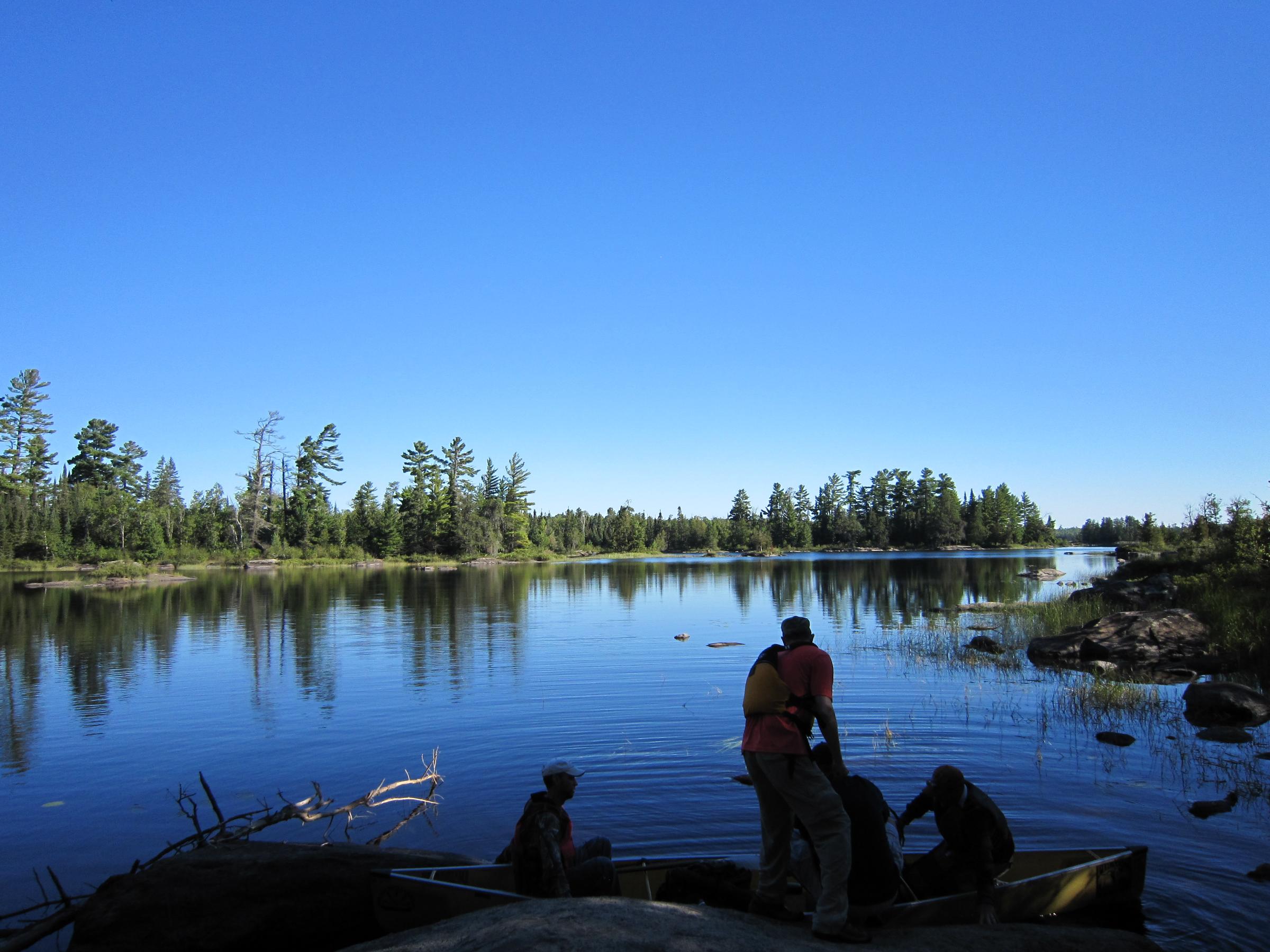 We got our paddling bugs worked out quickly, and were soon steering straight. Leaving in September, we didn’t really know what to expect for weather but we got lucky because it was unseasonably warm – 70’s, 80’s, and nearing 90 at some point. I think we had about an hour of rain total the entire trip. The only downside to an extra warm fall is that the mosquitoes were still in full effect. I didn’t find them horrible, except on the portages. Some of the other guys thought they were pretty bad, and one gal we ran into said that she had been here several times and this was the worst she had experienced. But if this was as bad as it gets, I’ll take it.

We traveled north on S. Kawishiwi at a nice leisurely pace (~3mph). We had a certain campsite in mind about 10-12 miles away. After paddling for about 2 hours, we came to our second portage, which we found pretty easily. Several times on S. Kawishiwi, we pulled out our maps just to double-check, but overall the route was pretty straight forward. The second portage was 122 rods and most of the guys single portaged it as well. You could bypass this portage by an alternate river route, but that would have taken longer, and may have involved some rapids.

Between this portage and Little Gabbro Lake was a small set of rapids. We decided to maneuver through them, which in hind-sight may not have been a good idea. We got bounced around a little, and while paddling, Trav’s paddle struck a rock and partially broke where the paddle meets the shaft. This made the rest of his trip a little more difficult. With less integrity, he had to paddle gently the rest of the way. (Another note to self: Apparently you are always supposed to grab one extra paddle from the outfitter, just in case this happens). A channel led us from Little Gabbro to Gabbro Lake and we were soon to our campsite of choice. It was in the middle of the lake, on a long peninsula. A group of guys were coming up quickly on our six, and when we were within talking distance, they asked us if we had a destination camp in mind. When we explained what campsite, he looked disappointed, and said that they were shooting for that site as well. I think it was the same guys from the parking lot. Good thing we just beat them out. He said that since we were ahead of them, that it’s ours, and they’d shoot for something farther down. We got lucky, because it was open, and it was a huge, beautiful campsite. Lots of room, a giant boulder in the middle for a kitchen, and a huge slap of rock face that gently slanted down the end of the peninsula into the water – perfect for lying on at night and star-gazing. There were several good tent pads, good trees dispersed about, and a nice fire grate with wood benches. Here’s a little painting too, that someone made of the view from our campsite. 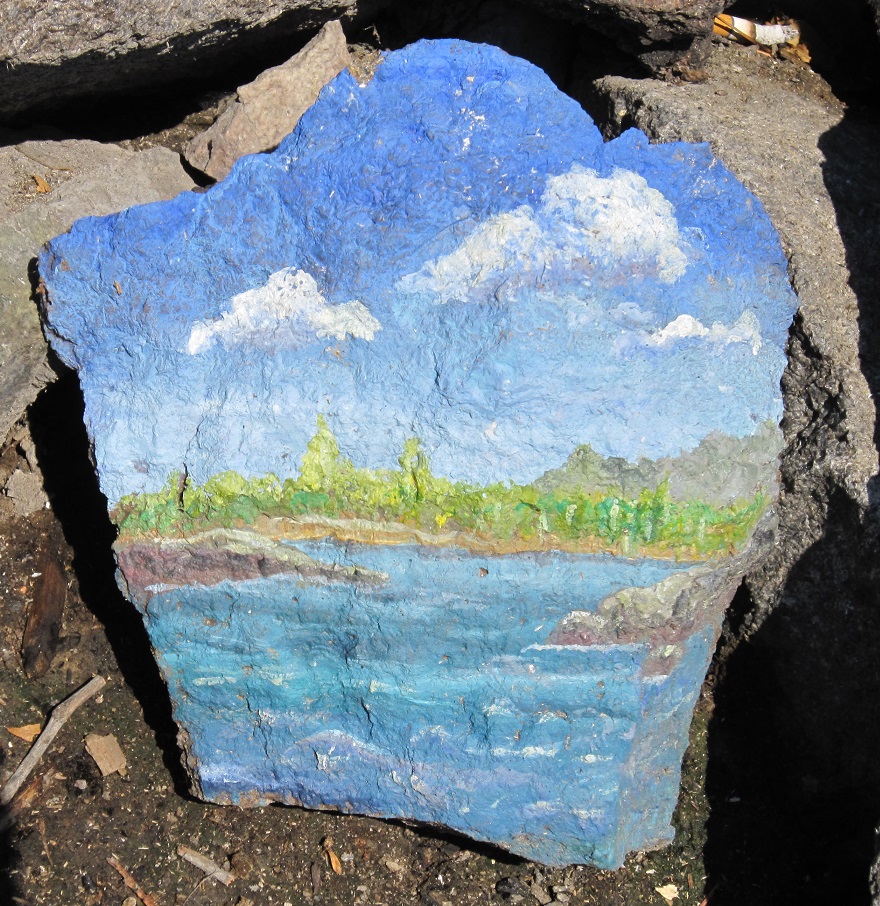 Everyone set up their tents. It was now about 1pm. We prepared some cold cut sandwiches and chips which tasted pretty amazing by this point. Then some guys worked on setting up the tarp canopy, while the others worked on gathering fallen wood and filtering water. The filtered water did surprise me. I pictured all the water being crystal clear out here, but even after running it through the gravity filter, it was the color of whiskey. We hoped that it was actually filtering properly, but after tasting it, we didn’t care because it tasted fantastic. Once camp was set up, we went out around Gabbro for some fishing. I think I got skunked on Day 1 but some of the guys caught a couple fish. Back at camp, Hemi prepared our first big dinner meal. We had steaks, mashed potatoes and Suddenly Salad. This meal was absolutely delicious after a long hard day!

After dinner we built up a nice big fire and mixed up some Vodka Mio’s and Whiskey Lakewaters. It was time to unwind, and stare up at the millions of stars.

Woke up around 8:30am. After everyone got up, I got my morning coffee rolling and we cooked up a big breakfast of bacon, eggs, sausage and hash browns. Our little chipmunk friends in camp were pretty brave while they sat nearby begging for food. After finishing up some final details of setting up camp and visiting the infamous mosquito-infested Thunderbox for the first time, it was time to relax with a little more fishing. Since I’m definitely not an avid angler, this year I got by with a $25 fishing pole set with minimal tackle. The other guys definitely take it more seriously. All I used was jig heads with a tail, but this morning I did catch the first walleye of my life.

It was getting close to lunchtime and 4 of us decided to do a day trip. Trung and Trav decided to stay back at camp.. partly due to Trav’s broken paddle and partly because they just wanted to chill. We packed up and paddled east on Gabbro Lake, heading towards the large Bald Eagle Lake. Once on Bald Eagle, our destination was a giant 195 rod portage on the opposite shores. As we got close, it was difficult to spot, but we finally found it. The end of this portage was my favorite part. It leads to a shallow skinny river that is all covered in lily pads.. it was a really cool paddle. 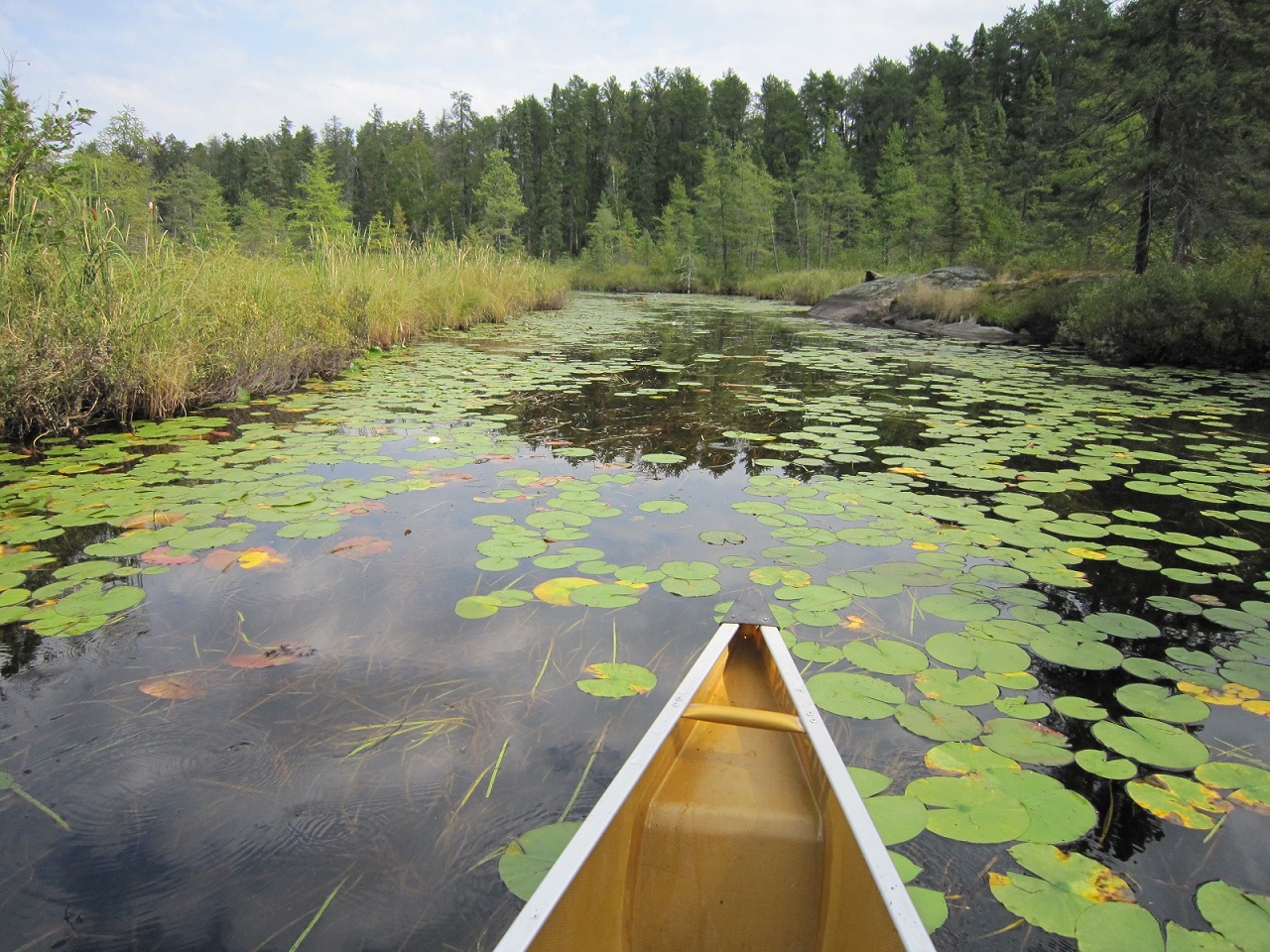 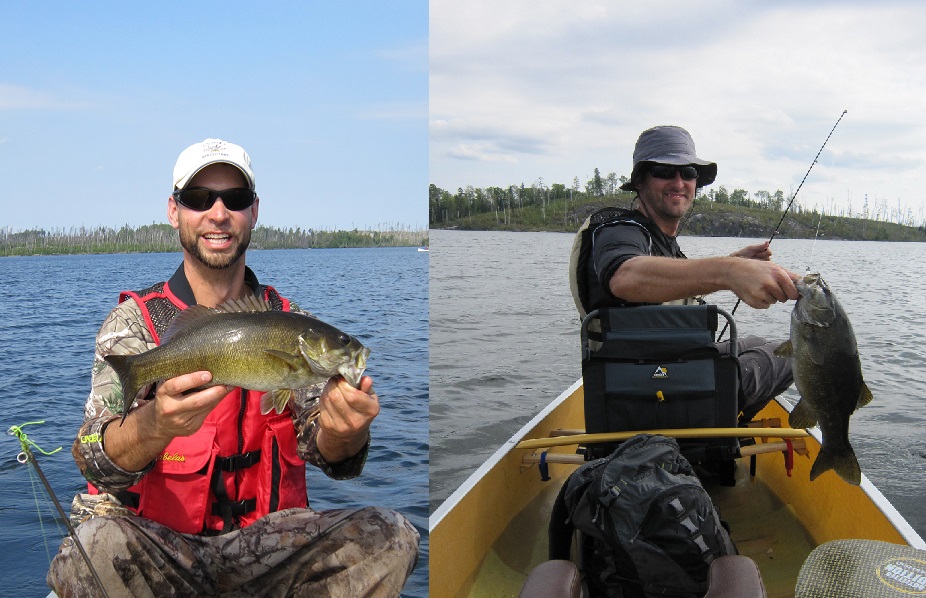 This lead to a short shot across Gull Lake, then a 50 rod portage to Pietro Lake—Our final destination. We ate lunch here and fished for a couple hours. We caught a couple walleyes and smallmouth.

By the time we backtracked to camp, the sun was setting and it was time for dinner. On the way back we saw a set of rapids that we decided to fish for a few minutes. We lost a couple lures, got no fish, but Arik did finally hook something. After fighting for several minutes, Arik yanked up on his rod and out of the water jumped a fishing pole! 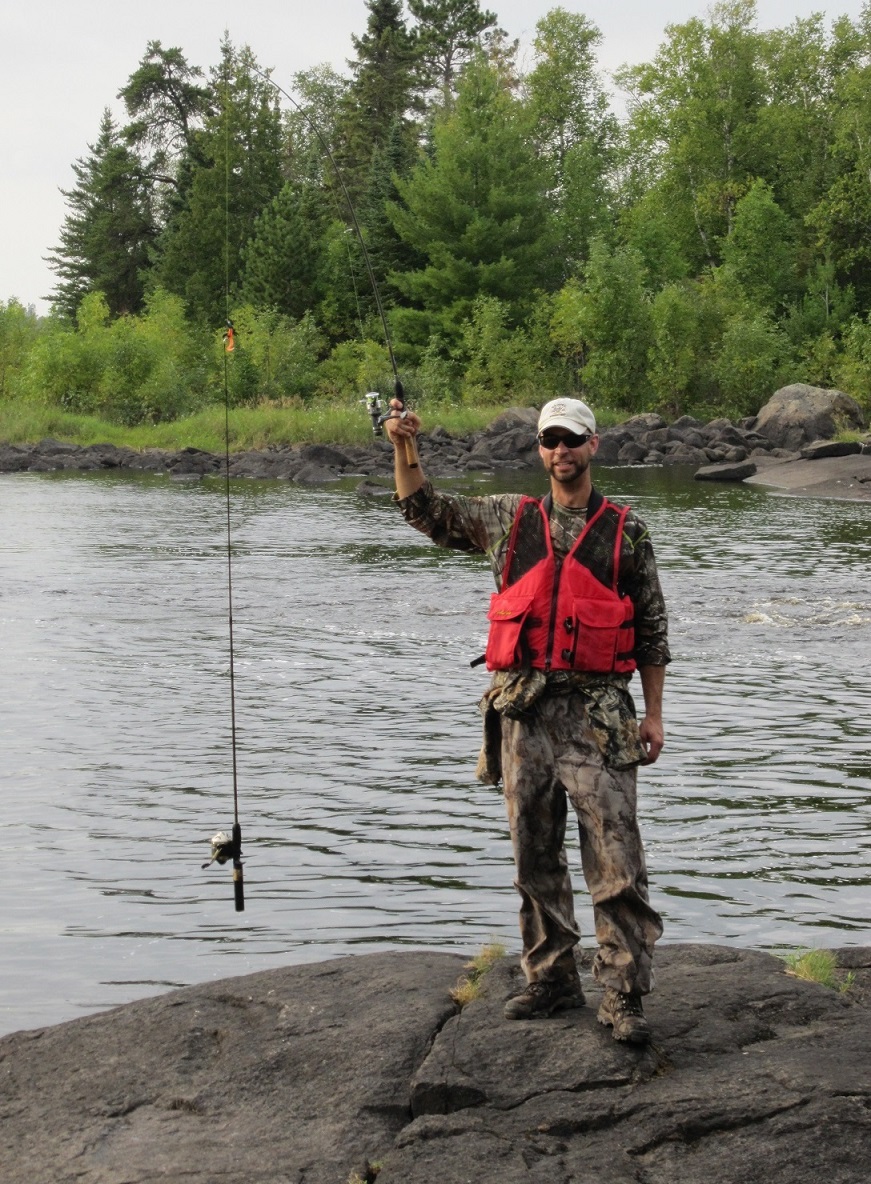 Trav spent the 7 hours we were gone hand-whittling a splint for his paddle. With a couple splints and some duct tape, he had it looking pretty good again! 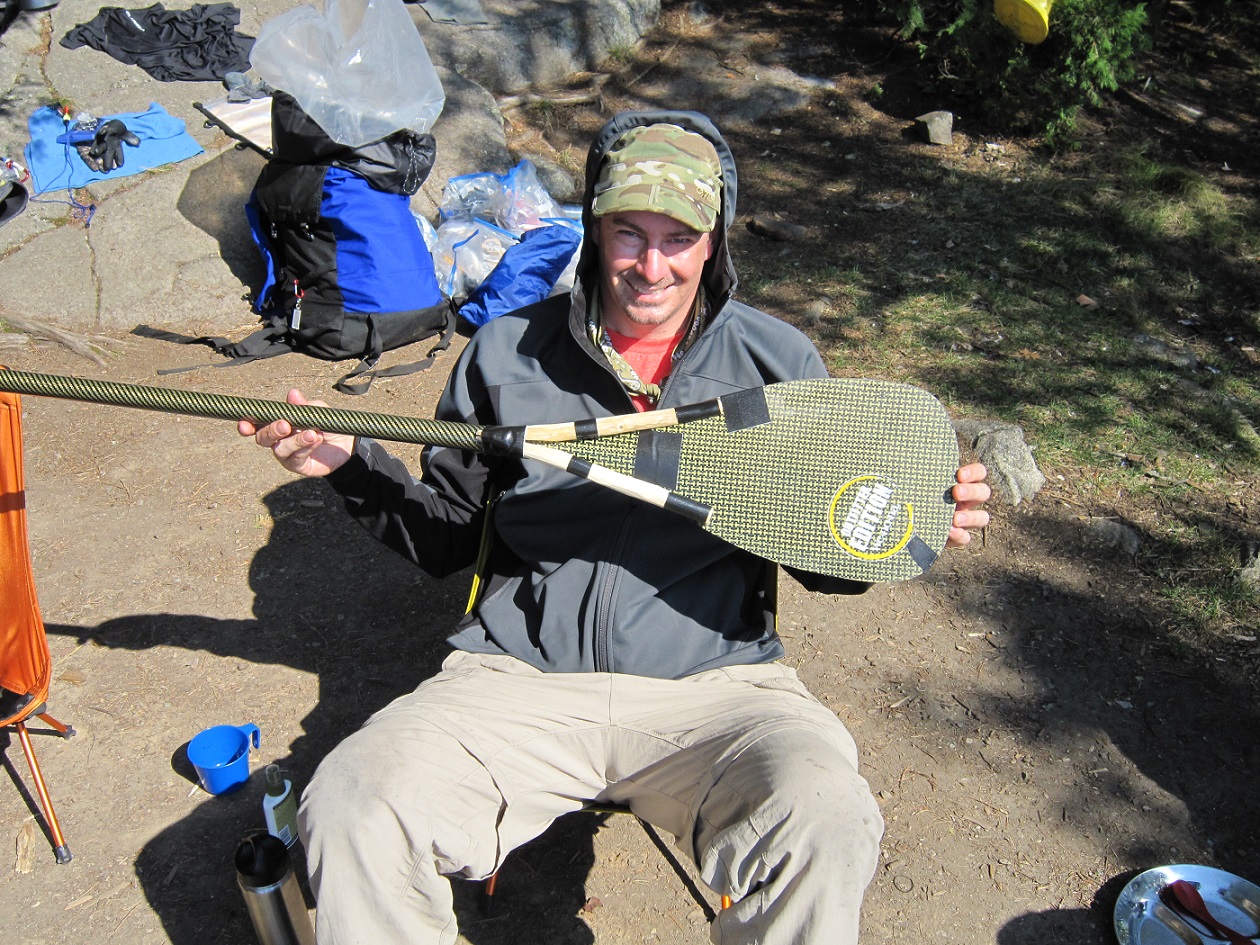 After a hard workout on Day 2, we decided to have a relaxing Day 3. On the trip the day before, we spotted a stretch of sandy beach, which is kind of rare in the BWCA. Since it was unseasonably warm this September, we decided to paddle to the beach and take a dip. Many of the guys used that as an opportunity to also take a chilly bath. The rest of the afternoon and evening involved more fishing and chilling around camp. Back at camp we got to witness a snake that was eating a big ol’ toad alive. We watched it for about 15 minutes as it started with one leg, and he couldn’t hop away, then body, then head. The toad was blinking and breathing away until we couldn’t see him anymore. Kinda creepy, but cool nature's food chain at work.

Now Sunday was already here and it was time to leave this paradise. We started breaking down camp pretty early in the morning. Yesterday, we kicked around the idea of taking a shorter route out of here. After looking at the map, we found that we could shave several hours off the route by bypassing South Kawishiwi altogether. There was a giant portage that led from Little Gabbro to Entry Point 33. Our plan was that 2 guys would go ahead with a lighter load to EP 33, while the remaining 4 hauled the rest of the gear and canoes over the 254 rod beast. They walked a couple miles down a county road that led to the truck at EP 32. By the time they walked there and drove back to EP 33, we were there waiting with the gear. When we got back to Sonmore’s SUV, he tried to start it, but it was completely dead. Somehow something drained his battery over the last four days.. not so fun in the middle of nowhere. But luckily we had a set of jumper cables in my trunk and we were soon on our way. We dropped the canoes off at Piragis and found an awesome little pizza joint in Tower. We sat down in time to watch the Vikings lose to the Lions.

All around, I couldn’t have expected anything better on my first BWCA trip—Great friends, excellent weather and a spectacular time with mother nature. Of course we proved to be rookies in a few respects, but overall I think we did a pretty good job. The major thing we need to learn is to pack more appropriately. I’m sure the minimalist idealism is a work in progress. I can’t wait to see you next year Boundary Waters! 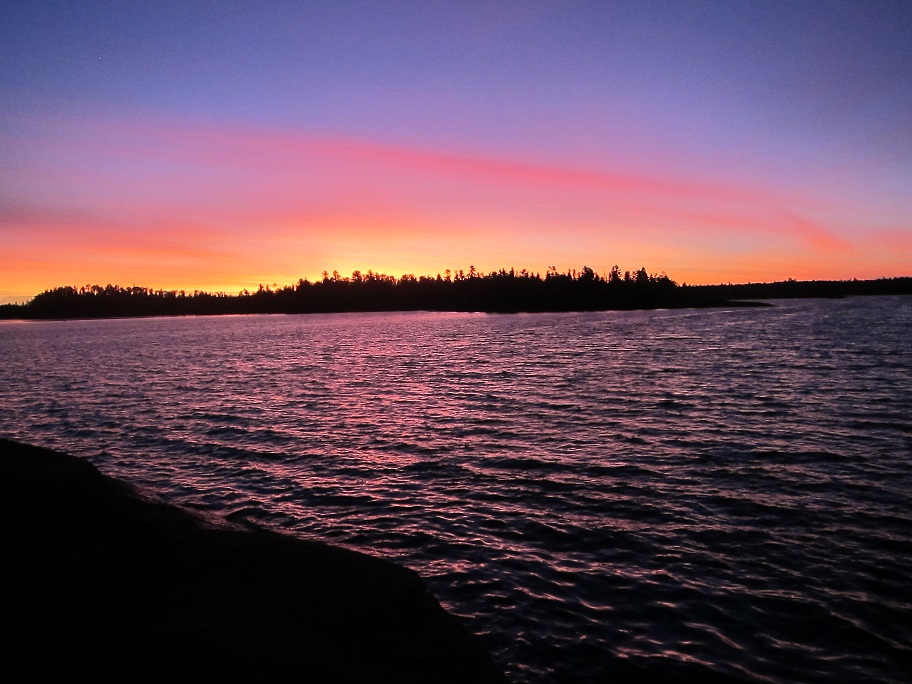