Lake One to Alice - 4 days of sunshine
by muddyfeet

We all slept in the next morning and found that those who ate more asparagus had less of a “dehydrated state + maybe a little too much alcohol” headache. Noted :) . I was testing a homemade alcohol stove that I kept nested in a little kit with a cup/cozy/small fuel bottle/ and vacuum-sealed Via coffee packet. The goal was a silent cup of hot coffee whenever you wanted it (first thing in the morning without waking anyone else). It worked well and I kept it ready-to-go throughout the trip. Breakfast was a new recipe of dehydrated peanut-butter-banana-grape nuts spread on toasted English muffins. It was good, but looked like nutty turds. I would make it again, but package it differently to make preparation easier and less messy. 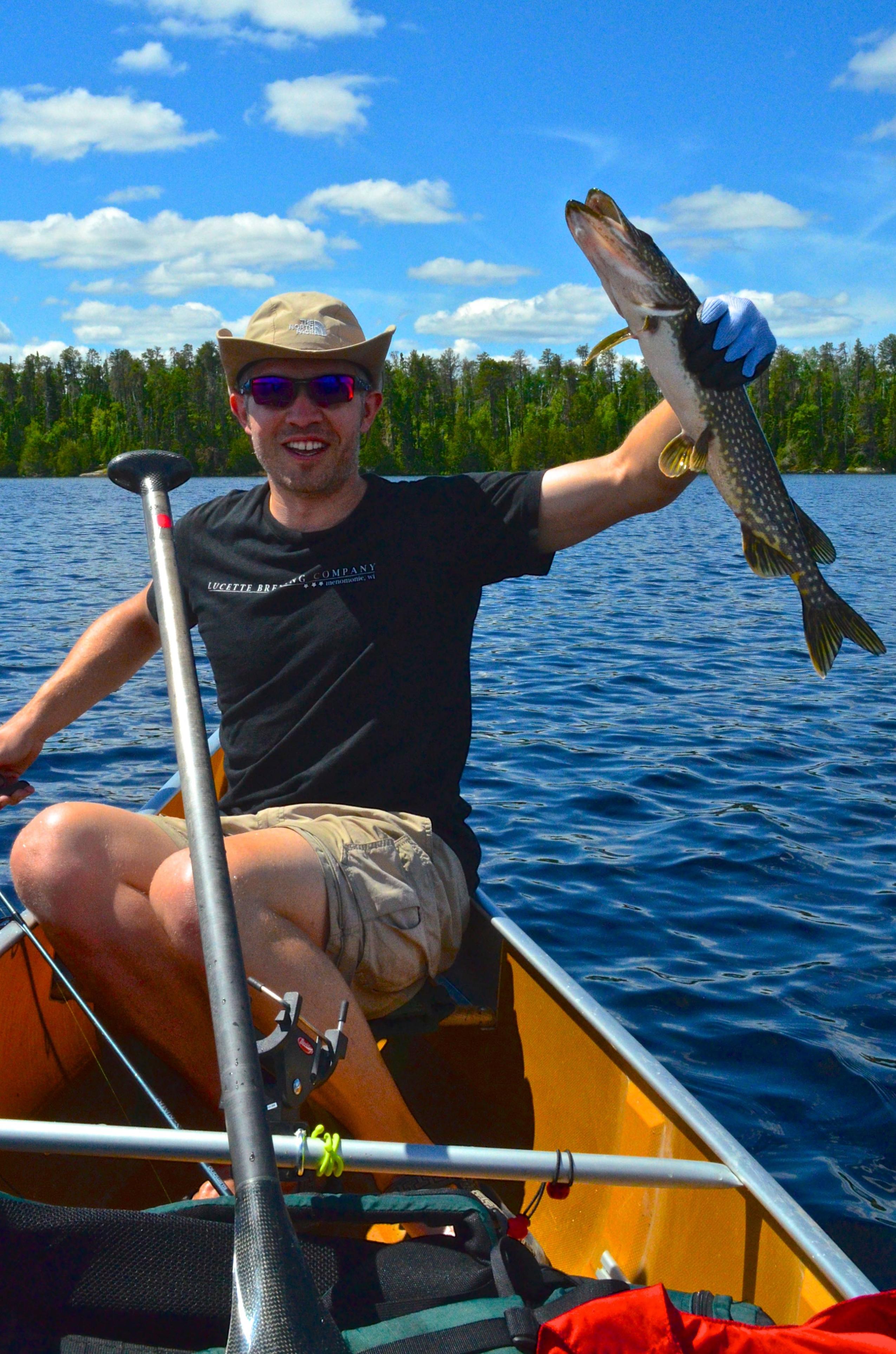 We packed up and headed North on Insula without being sure of our destination for the night. The plan was to find a cool campsite and stop whenever the group felt like it. I caught another good sized pike on a big crossing of Insula. Fishing is awesome when there really isn’t much work involved other than paddling a little harder to make up for the extra drag. We crossed the three greasy portages into Alice and at points had sucking mud knee-high. Sometimes you can skirt the mud on the side or jump across, but with a canoe and a pack there is often little choice but to strap your Tevas on tight and head straight through. Alice was pretty, with more open water, partial cliff-lined western shore, and sandy beach campsites to the east. We crossed and paddled up the eastern shore. 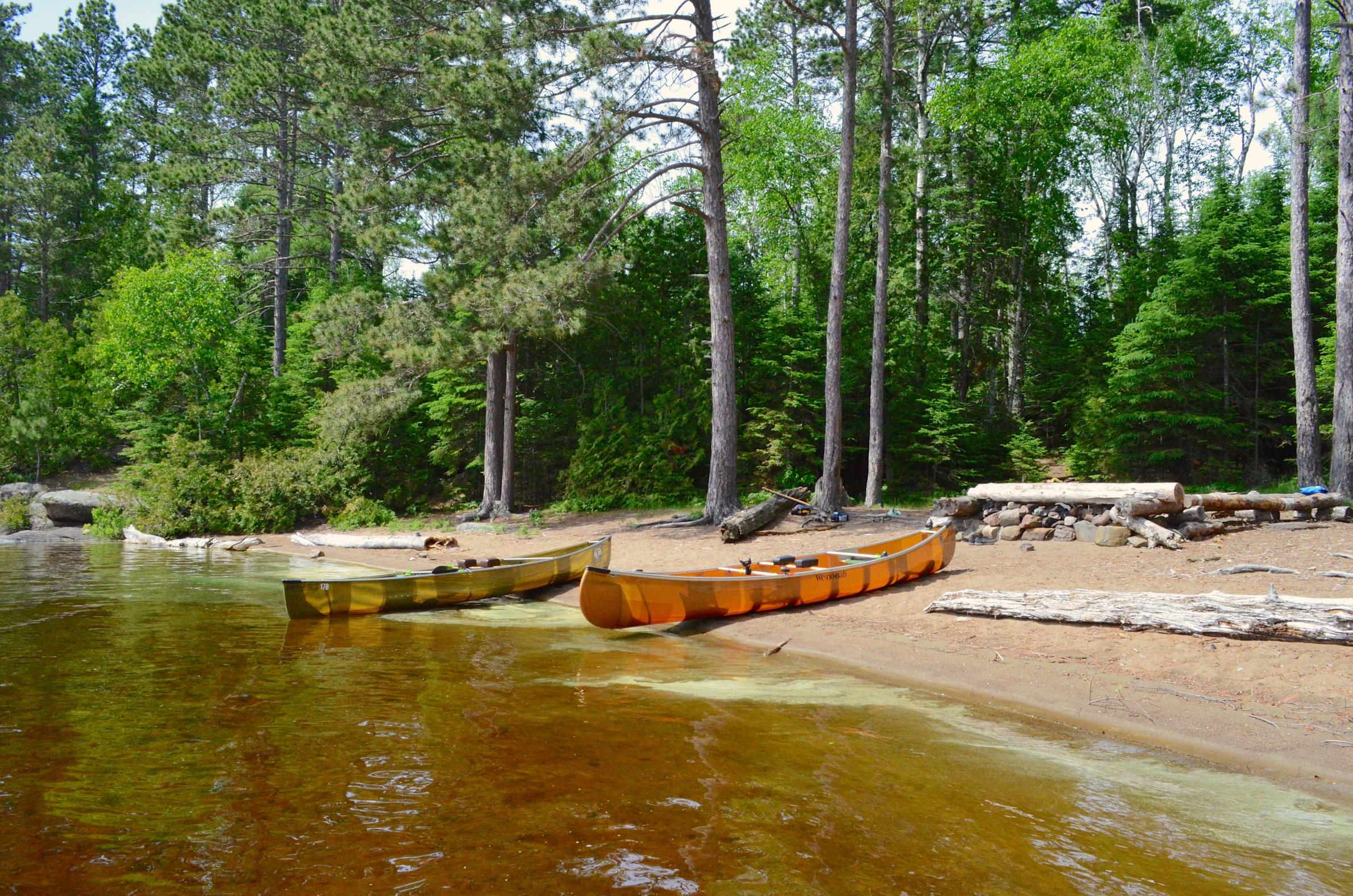 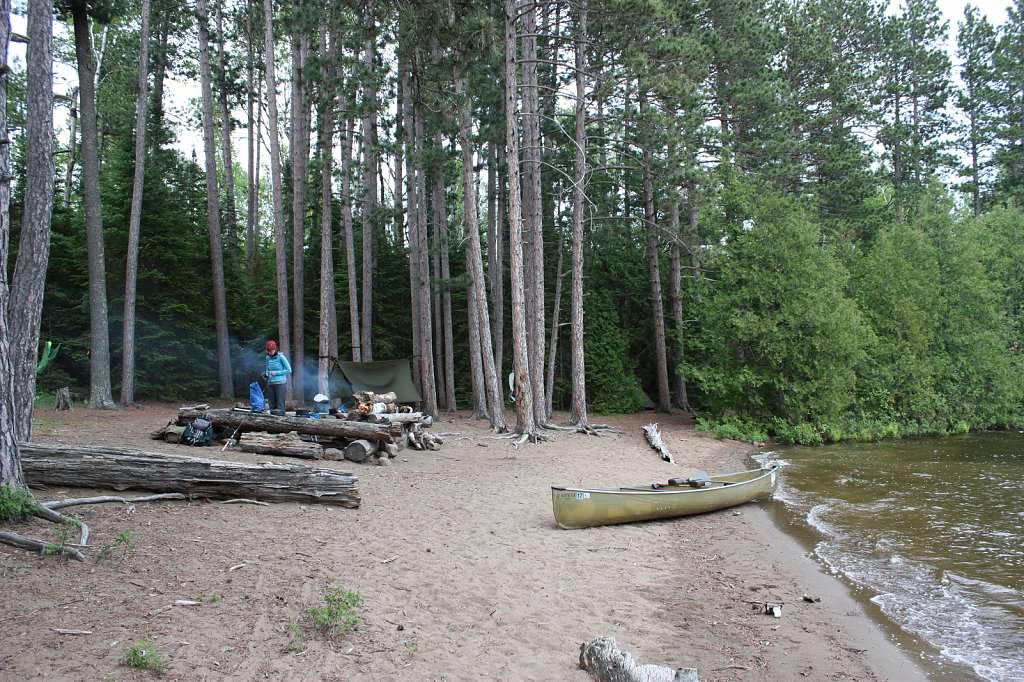 Site #1169 was open and was everything we wanted to see. Nice sandy beach, sheltered tent pads, plenty of solid hammock trees, and a large cooking area. There was also a south wind that was funneled into the bay right at our campsite. Afternoon swimming commenced, and after camp chores I tried some fishing. First casting topwater bait, then crank lures with no success. I tried taking a tandem canoe out solo, kneeling in the center, but it was too difficult to both hold my position and fish at the same time. It had also clouded over and was a little cold. Discouraged, I gathered some firewood and piled rocks up to improve the wind-break for the fire grate. Then I had an idea and made an anchor with a rock and spare length of cord. It worked great! I anchored the canoe in 15 feet of water off the shore and it pointed into the wind and stayed put. There was a pair of loons fishing and after waiting for them to move on I casted to where they had been. I had a soft plastic storm swimbait that looked like a baby pike and not 4 casts later I had hooked into a 19” walleye. Just in time for dinner! 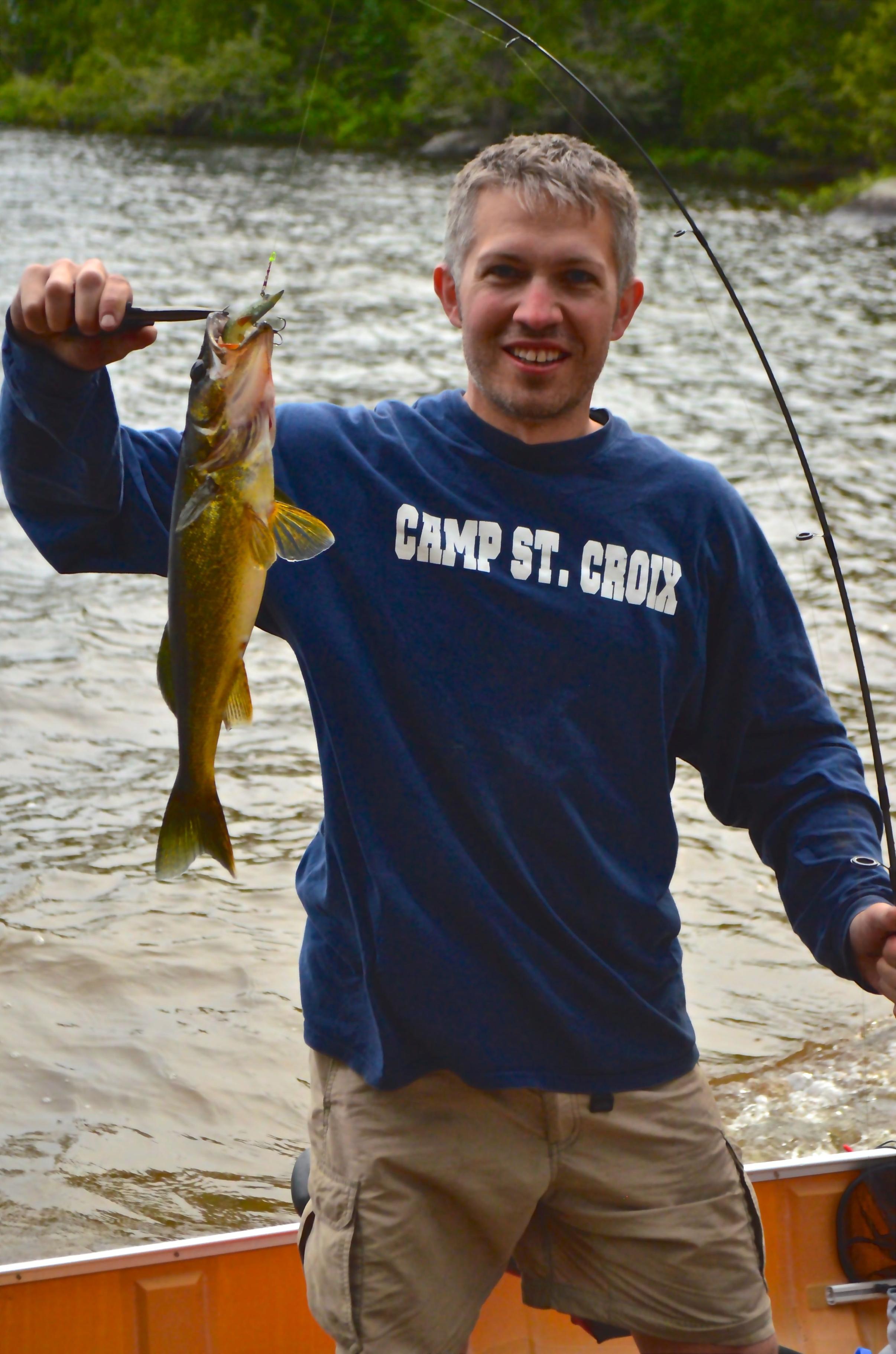 The planned dinner was dehydrated burritos with beans, corn, salsa, chicken, guac, and rice, but now it had turned into fish tacos. Also as an experiment I had packed some small corn tortillas to fry into chips and it worked extremely well. We snacked on hot salty chips while waiting for the taco stuff to rehydrate. Fried the fish and for the second night enjoyed an amazing dinner! We fished until dark, catching little, and then hot tea by the fire before bed. 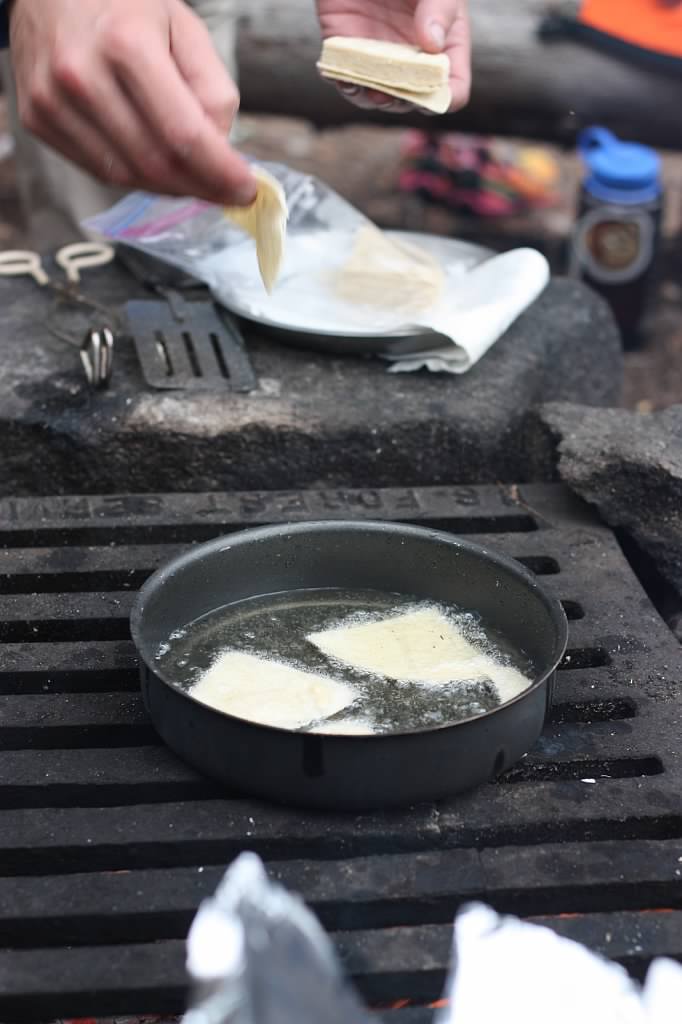 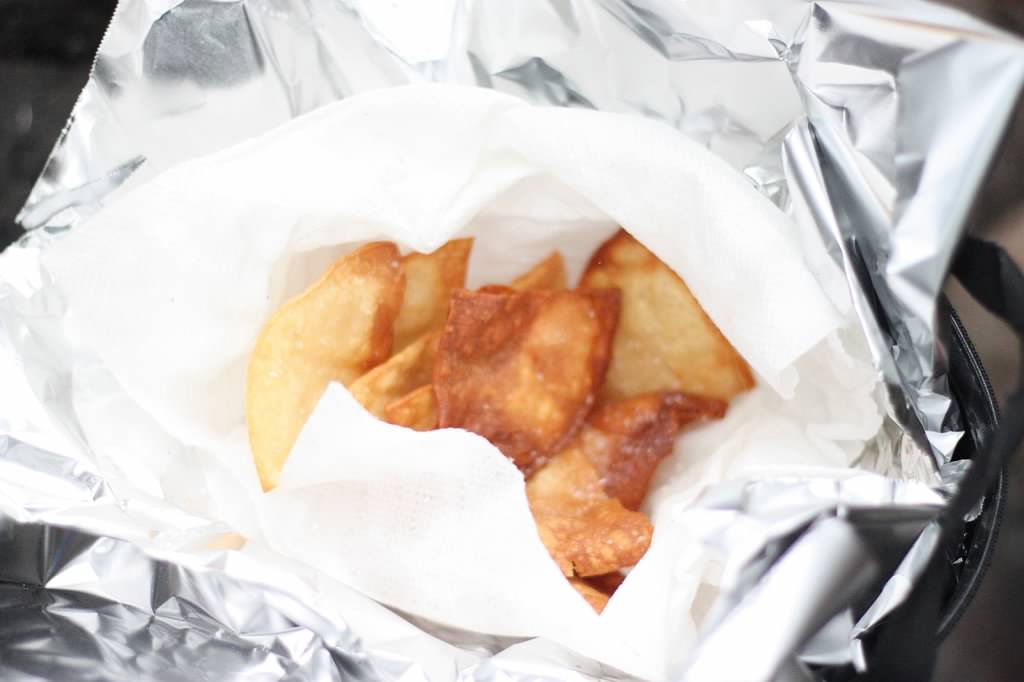 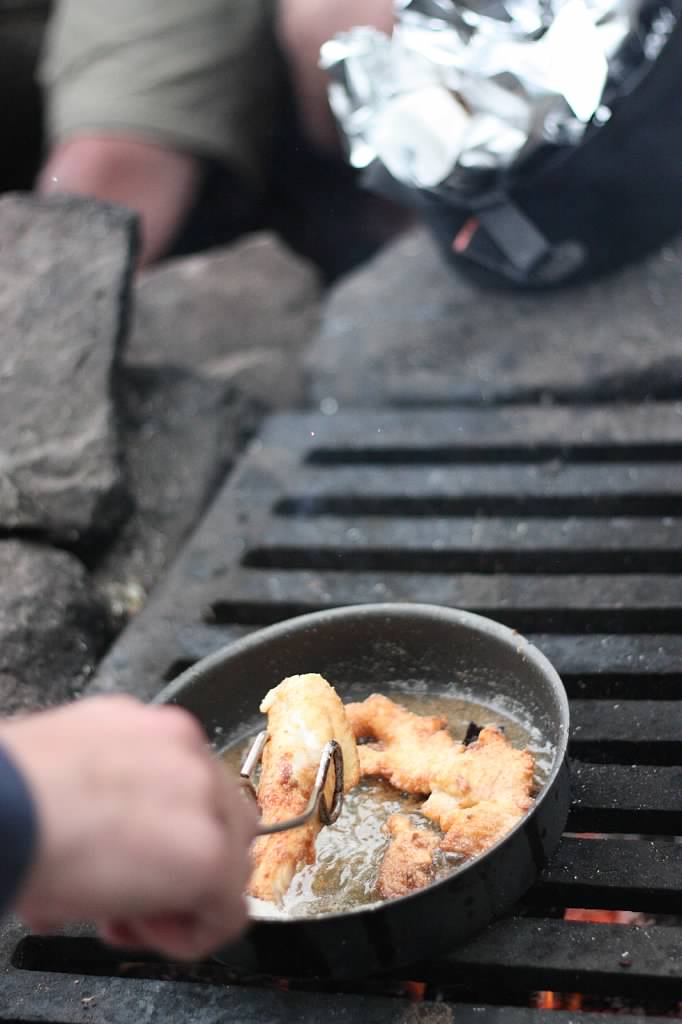