Trip Type: Paddling Canoe
Entry Date: 05/23/2015
Entry & Exit Point: Seagull Lake (EP 54)
Number of Days: 8
Group Size: 3
Trip Introduction:
Our 2015 spring trip would start and finish at dazzling Sea Gull Lake. While I consider Clearwater Lake EP #62 as my favorite entry point lake, Sea Gull Lake is definitely my favorite entry point from the aspect of the top notch areas/lakes/routes that are readily accessible from there. Most of the area we would be traveling through had been devastated by the massive Cavity Lake fire in 2006. We hadn't been through here in a few years, so we figured this would be a great opportunity to take another good look around before Mother Nature’s reclamation of the forest began to completely shroud the views and vistas that the fire had opened up.
Discuss Trip: View Discussion Thread (4 messages)
Day 1 of 8
Saturday, May 23, 2015

The drive up the night before provided a couple noteworthy animal sightings (a fox & a mother bear with 2 cubs) which helped fuel our 3 year old (Aurora) daughter’s pre-trip excitement. Tuscarora Lodge & Outfitters provided us a bunkhouse for the night and a delicious French toast breakfast in the morning. Afterwards, Andy & Sue got our permit and gave us some welcome last second advice and friendly well wishes, then sent us on our way.

It was a short drive to Blankenburg Landing on Sea Gull Lake where we shared the boat ramp with a couple of other canoeists. An interesting note about this landing: The Blankenburg’s were an undeniably influential family in the development of the Gunflint Trail as a recreational destination. They started several of the resorts up here, including Gunflint Lodge. Their legacy is memorialized here at this landing, where there is also a beautiful small sandy beach. 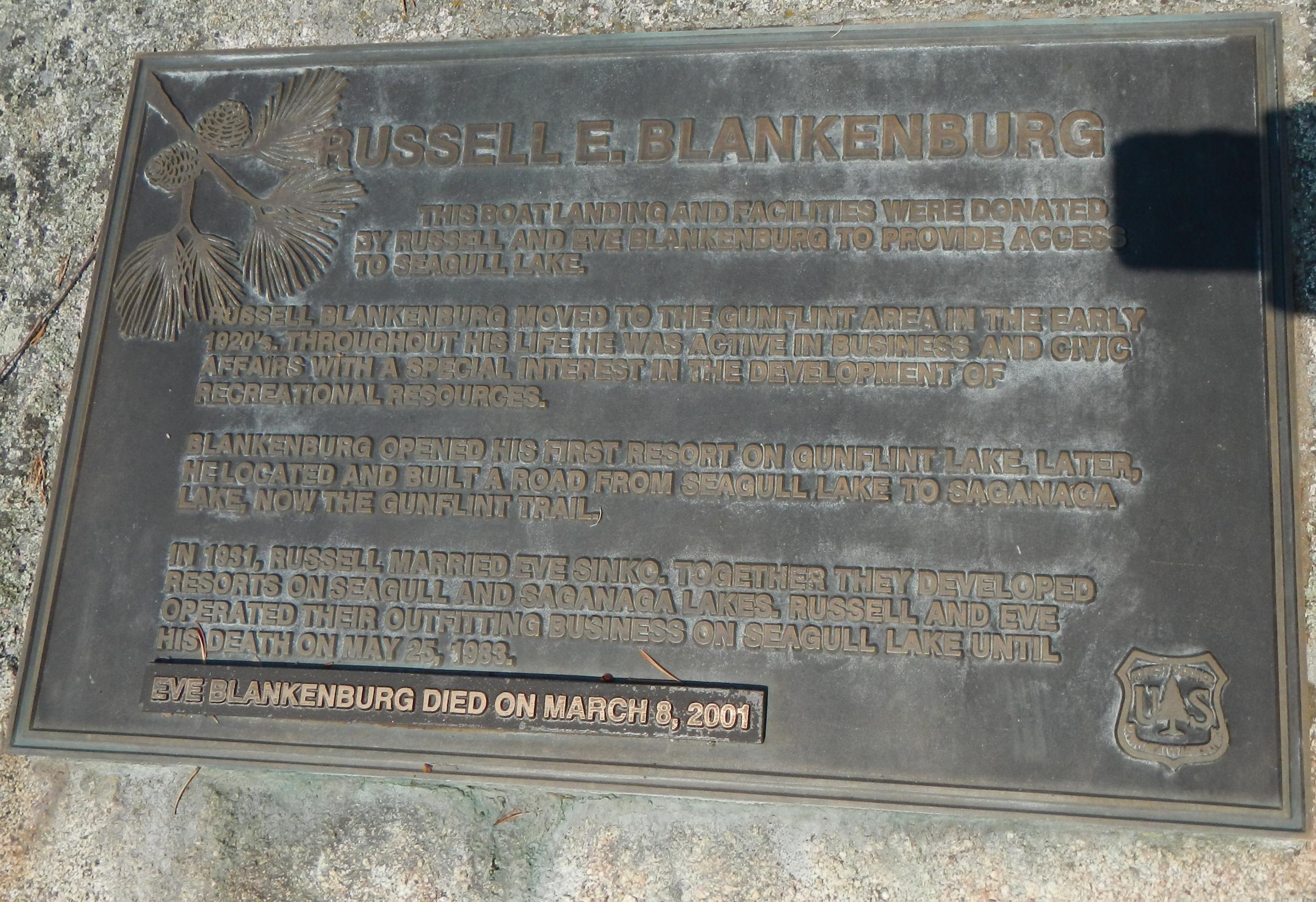 Soon we were out on the water paddling south for the Paulson Lake portage. Aurora had received a toy fishing rod from the Easter Bunny earlier this spring and had spent the weeks leading up to our trip practicing casting in our yard. Now it was to time to put that hard work to the test. For the most part she did quite well and giggled with glee whenever she had a good cast. I hoped that she would be able to take a crack at trolling with the real thing later in the trip. 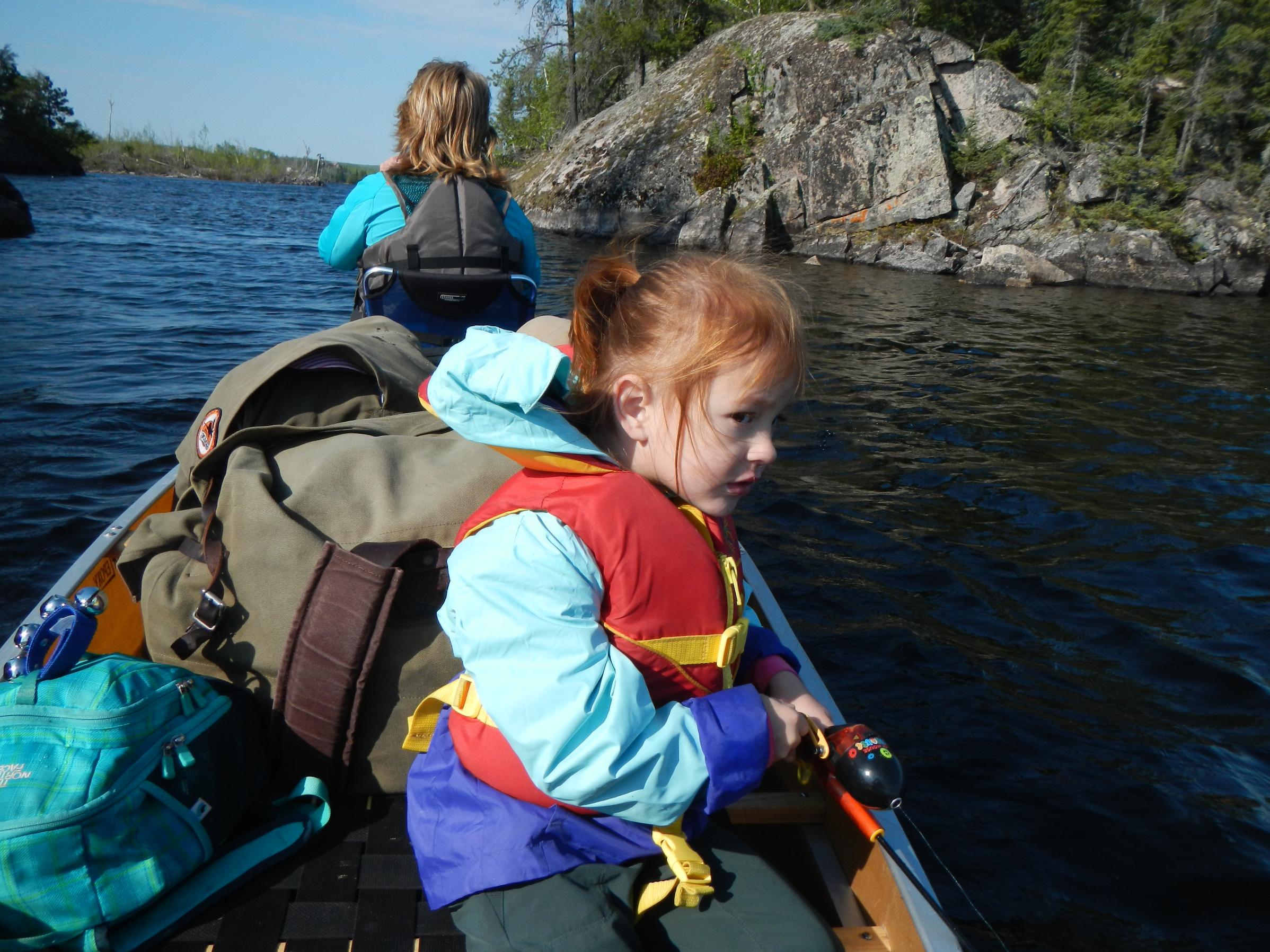 It was shaping up to be an absolutely gorgeous day, and thankfully Sea Gull afforded us a most pleasurable paddle down its SW orientated underbelly.

There were only 2 campsites on Paulson Lake, and then it would be several lakes/portages before we’d run across another. So, of course, it was our great hope that the prolonged 515 rod Paulson portage would be our one and only overland trek of the day. There was only one way to find out….

The trail starts out at a nice open landing where the small charming creek, (that the portage parallels), tumbles into Sea Gull Lake. Layers were hastily shed as the trail quickly climbs up to the first, of many, outstanding panoramic overlooks that were peppered throughout this portage. The creek also provided a stunningly scenic backdrop with countless miniature cascading rapids & waterfalls, as well as a number of ponds where the beavers had dammed up the flow. 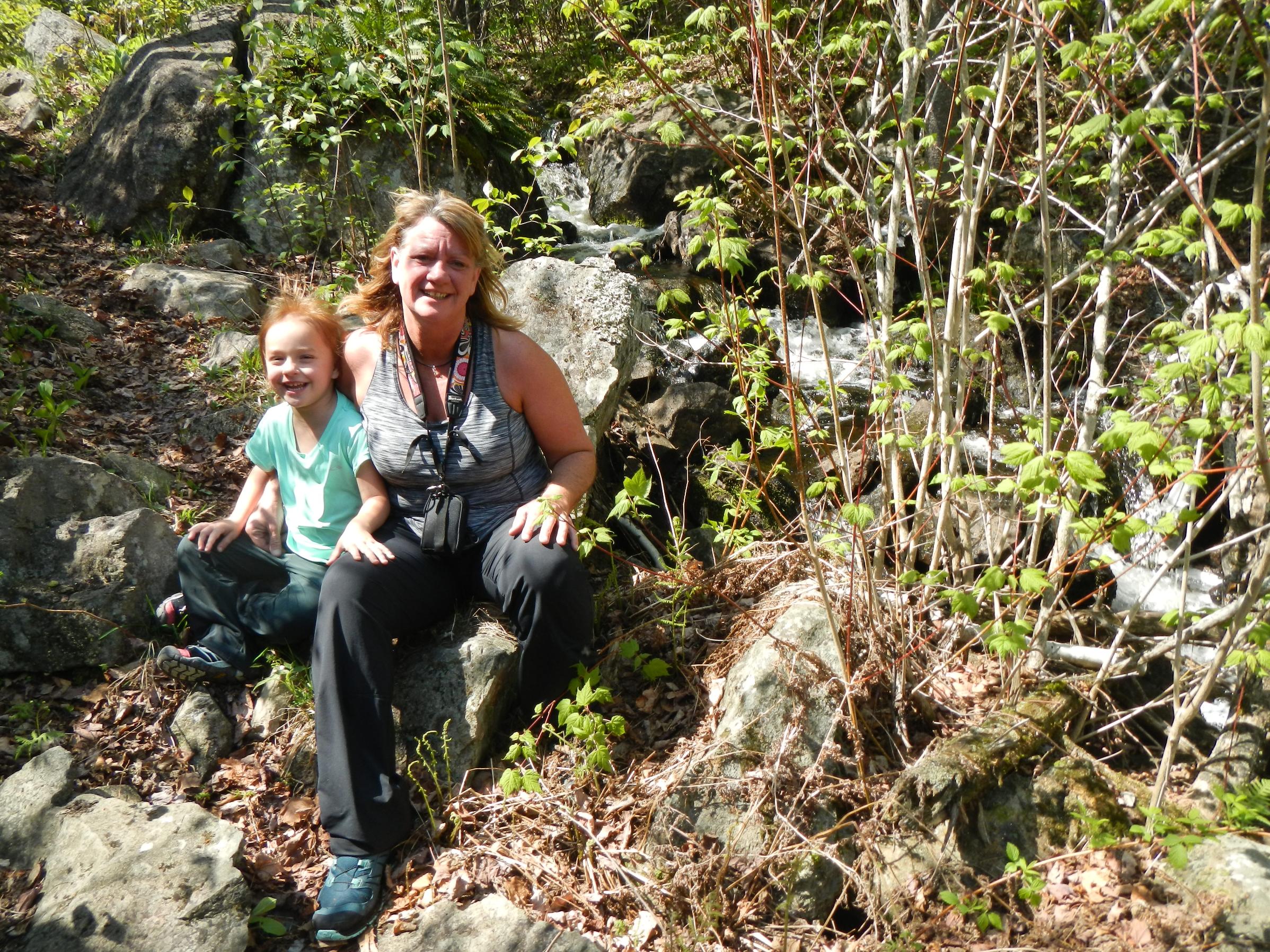 Amazing quantities of flowering blueberry plants encroached on the trail at every turn. At about the mid-point, there was a pile of large rocks with a dark opening that looked like it could’ve been a wolf’s (or some other animal) den. There had been plenty of scat along the trail, so we didn’t investigate too closely and scurried quickly past.

As an added safety measure, we each kept our Motorola walkie talkie/ weather radios on - and on our person at all times. So, in the event of any emergency, we could immediately contact the other person. Fortunately, we never needed to use them for that purpose. 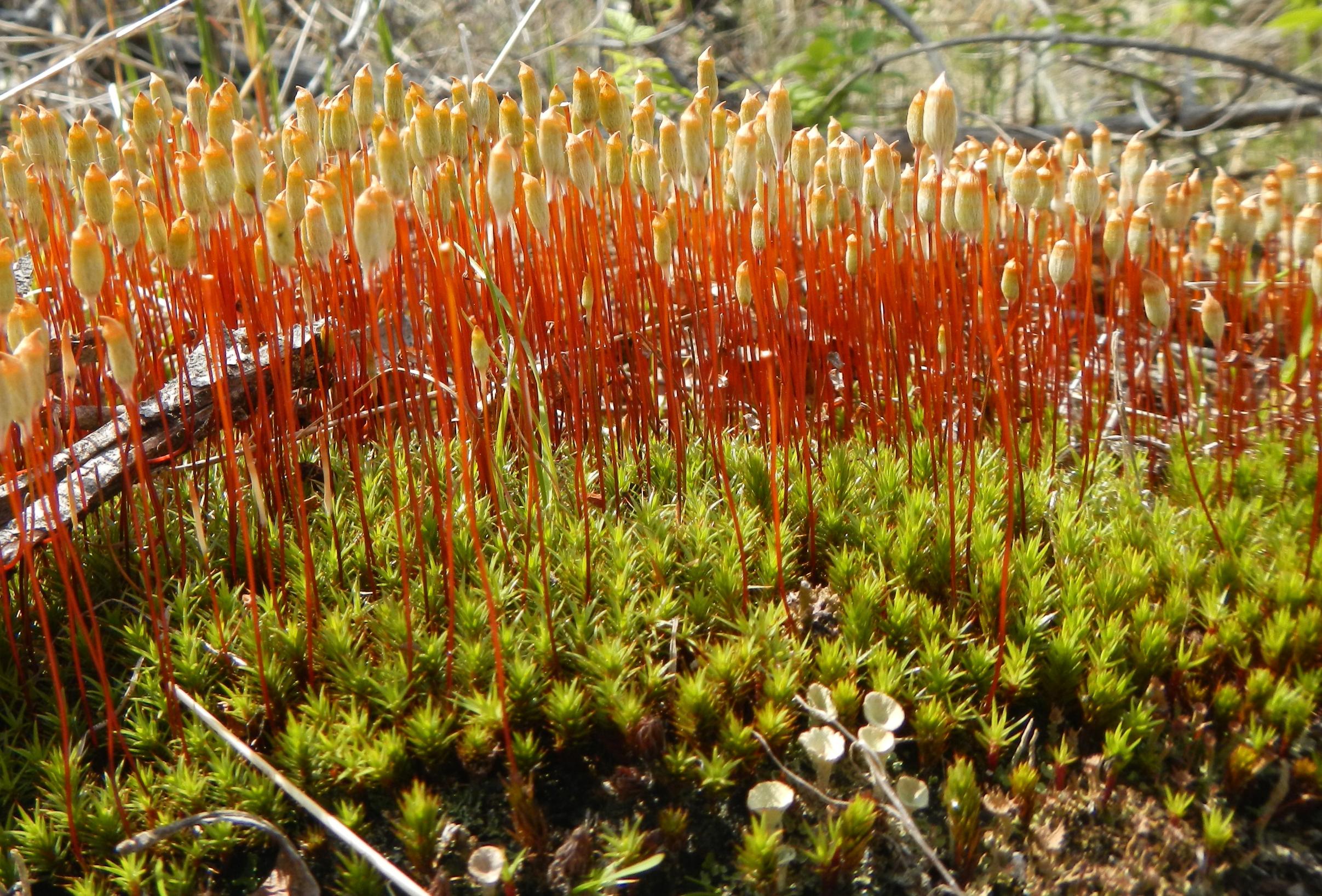 Currently one of Aurora’s favorite songs is “Rocks and Roots” from Jerry Vandiver’s excellent CD “True and Deep (songs for the heart of the paddler).” Well, this lengthy portage gave her ample opportunity for an up close firsthand look at the inspiration for that song. And, on a few occasions, they got the better of her and, inevitably, a few tears were shed. But, I’m both happy & proud to say, her stubborn determination won out in the end and, (while carrying her North Face backpack), she made it all the way across with very little assistance.

Besides the aforementioned rocks and roots, there had been hindrances of every kind – swamps, muck, bugs, creek crossings and several substantial climbs. But, even though this was clearly an exhausting portage, during one of our poses I recall both Vickie & I agreeing that this portage was truly an awesome experience. And, the time that has passed since this undertaking has only solidified our feelings.

Although very tough, perhaps my favorite section was how the portage finished up in magnificently picturesque fashion, tracing around the rim of a steep gorge before dropping precipitously downhill to pass by one last small idyllic set of rapids dumping out of Paulson Lake through an enchanting, aromatic grove of large cedar trees. As mentioned, this was also perhaps the toughest piece of the portage. Besides the steep drop, the path ran into the water where there were large boulders (some submerged) that we needed to vigilantly hopscotch across. Once back on dry land, there were a number of large cedar trees leaning over the trail. These proved to be very complex to negotiate, as they were impossible to get over, and crawling under was only possible without wearing a pack. So, we had to drag them behind us. The landing was mercifully blessed with several large cedar trees that provided sturdy back rests and luxuriant shade. 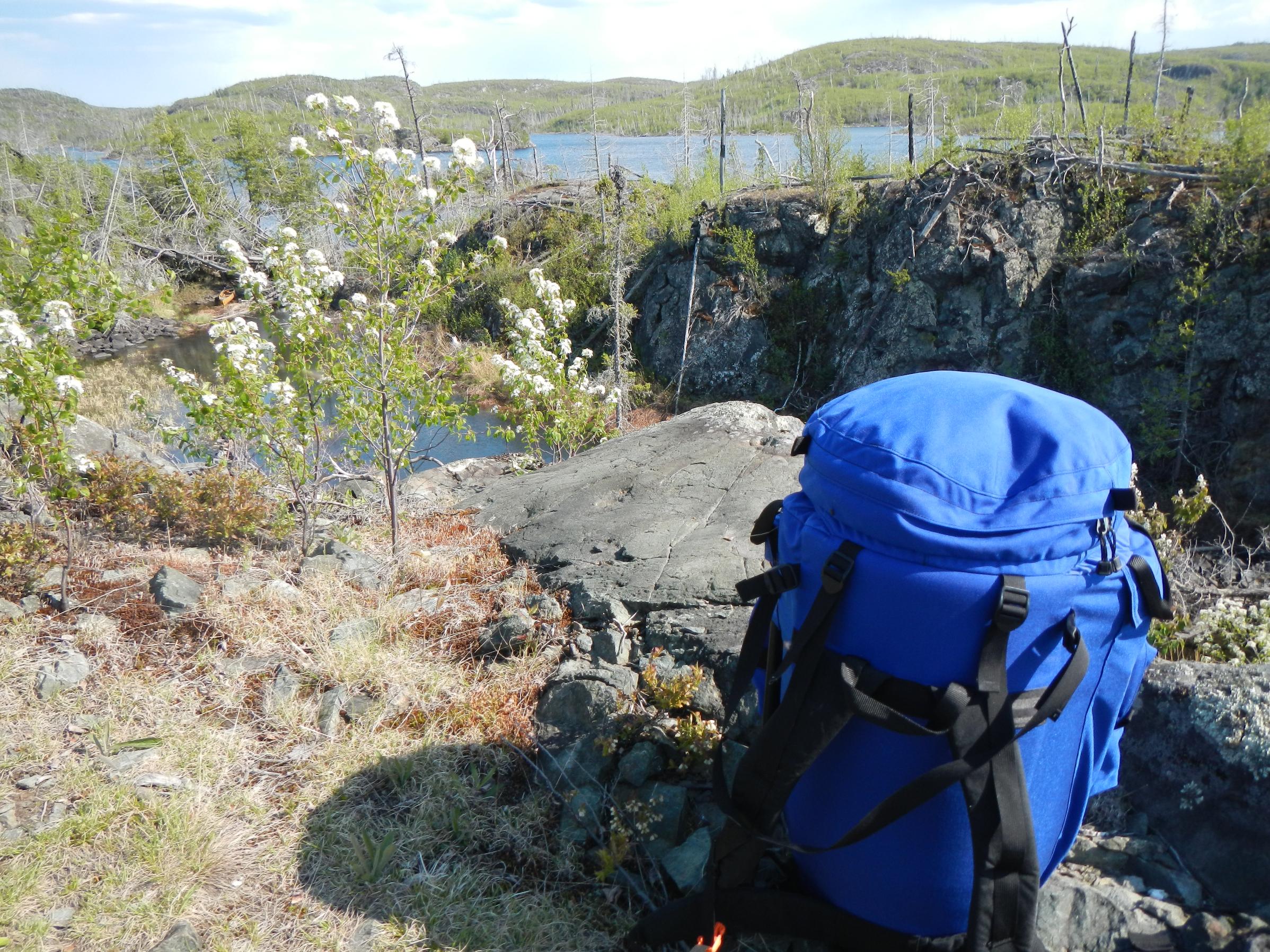 Paulson Lake takes its name from J.A. Paulson, principal investor in the ill fated Paulson mines that was located near here. Apparently only one load of ore was ever shipped before the mine closed. Both the Kekekabic and Centennial Hiking Trails offer opportunities to visit several of the significant areas associated with this mine. The Chik-Wauk Museum also has a prominent historic display, including several artifacts.

A quick study of the map shows that Paulson Lake was affected by both the Cavity Lake & Ham Lake fires. And, even if you weren’t aware of that, the countless tall limbless spires seen in every direction on the horizon of rolling hills will immediately educate a person to that fact. One thing I later found peculiarly interesting, was the fact that there were several large red pines scattered around the lake that somehow survived. Not large stands mind you, just individual trees here and there amidst the mass devastation. I wondered how they steered clear of what I thought would be an unavoidable fate.[paragraph break]

We needn’t have fretted over campsite availability, as both sites were unoccupied. Pre-trip planning indicated that the island site was supposed to be the better of the two. So, after catching our breath a bit, we wearily paddled over to claim our camp.

Waters were fairly calm, so the rocky landing didn’t pose any problems. This elevated site boasted an outstanding multi-directional view with southern exposure. On the down side - the tent pads were noticeably sloping, tarp rigging was challenging and the trail to the latrine required extra caution. Never the less, we were home and happy for it.

Tonight for supper it would be jambalaya. Fresh shrimp and andouille sausage deliciously complemented our dehydrated peppers and onions. To Aurora’s delight, it was s’mores for dessert. The rest of the evening was spent putting the finishing touches on getting camp set up and then just unwinding, relaxing and enjoying this little slice of heaven we had carved out for ourselves. I’ve always kind of relished that feeling of sore exhaustion at the end of a day like this. I consider it an indication that I’ve lived life to the fullest. 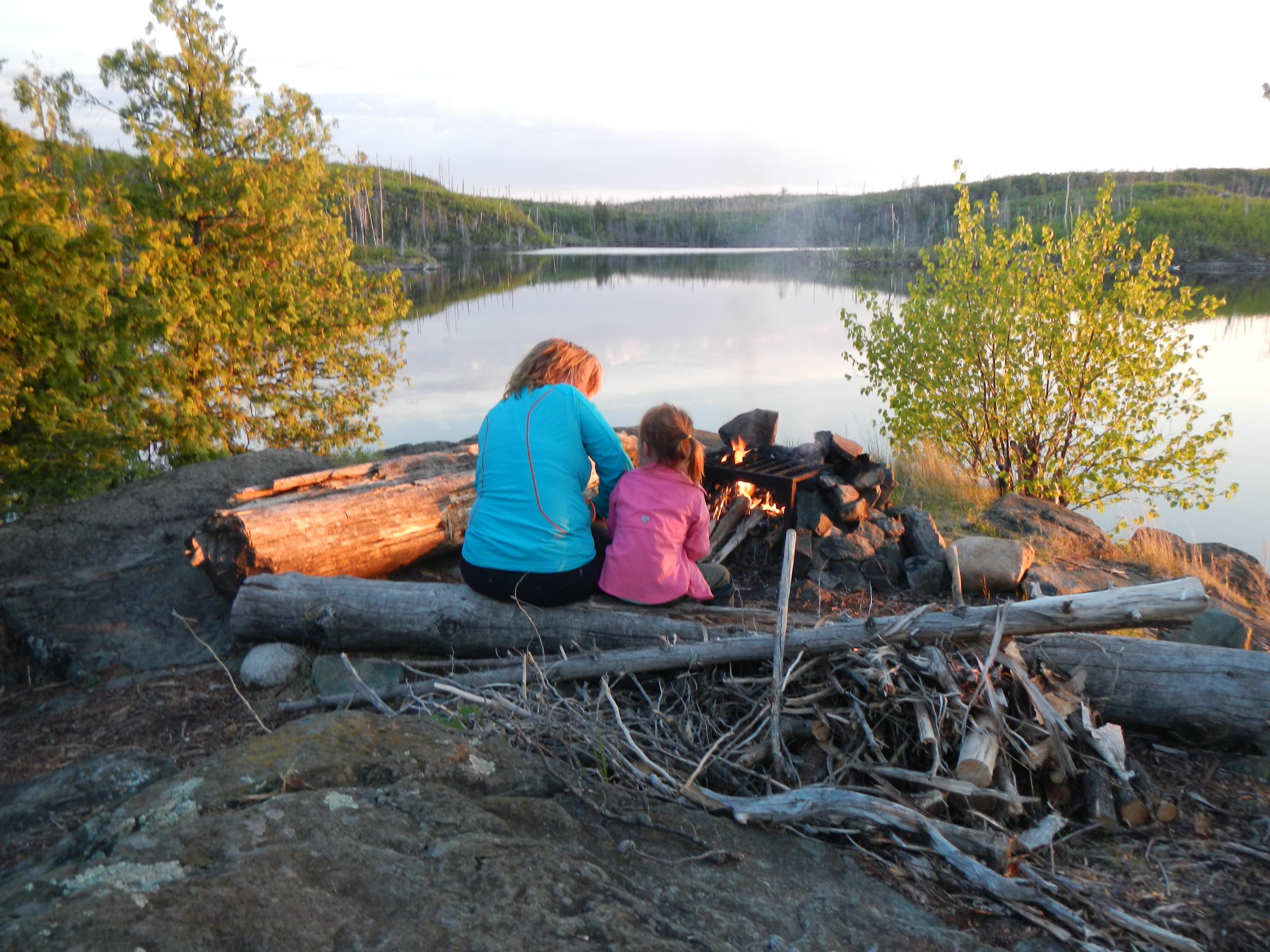