EP48 – The Best of June
by anthonylane

Got to Rockwood Outfitters at 4 PM and said our goodbyes to Mike, Joe and Lin around 5. We were pretty well loaded down, but Mike assured Joe that we would be ok—"They're young, and they did the 320 Skipper a few years back."

As is usually the case, we got slightly lost on Poplar. I don't know what it is, I've always thought I had a good sense of direction, but this has to be the hardest lake I've ever navigated. The scale of those islands on my map just throws me when on the water. As a result, we didn't find the portage entrance to Meeds until 6. Damn, at least the weather was nice and calm. Consider it a warm up.

Bring on the 290er. It's more like 320. I don't recall what the landing was like, likely nothing remarkable. On the other hand, the initial ascent that greets you about 75 yards in is f'ing tough! Wow, didn't expect this. My legs are torched by the time we reach the top and I'm thinking, "Damn, this is going to be a long walk." Tough portage, the long wooden man-made planks seem to never end and the elevation change is nothing to scoff at. This is a solid 8 out of 10 on the difficulty scale. If it ever gets muddy, it'll be that much worse.

Portage took 50 minutes and we were looking out to Meeds with what feels like a 10 mph breeze in our face. Time clocks in at 6:50 PM—later than we thought, but fairly expected given the pace and difficulty of this portage.

With fingers crossed we head to the first (best) campsite on the island. As we get near we can see smoke rising—damn! Really really wanted that one. We keep paddling into the 10 mph headwind and start to approach the second island campsite—smoke. Shoot! I take a peak at my watch and it's reading 7:15. Time to make a decision.

The furthest site is still a good 15-20 minute paddle and is the least desirable of the three. Do we try for it or cut our losses on Meeds and just head into Caribou hoping to secure one of 6 or 7 campsites? With a quick twirl of the finger into Caribou we head. With a nice tailwind we make good time.

The portage from Meeds to Caribou is a very short 20 rods that leads you to a calm meandering stream in a bed of cattails and other tall grass. The p0rtage out is rather short and the whole thing was a nice slow stunning paddle in the evening. We get to Caribou and it's pushing 8, and the sky is starting to cloud up. I estimate we have probably an hour of good light left at best.

As we put our boats in the water we see a man paddling solo around the back bay casting lures. As we approach I ask him if he knows how busy the lake is, and let him know that we're looking for an open site.

"I think they are all taken" he says…

This is where things start to get interesting, and a bit of a bummer. After the long drive up we were all hoping to make camp soon, enjoy a relaxing evening of fishing. We do a quick check of the lake and confirm that 4 of the 6 campsites are in fact occupied. The only two we can't check are the one tucked way back in the bay beyond the Horseshoe portage, and the other one on the extreme SW side of the lake. I don't think we have enough daylight to check both sites.

We make a decision to head towards the Horseshoe portage, maybe we can scope out the two or three of the sites down there and get lucky. Along the way we paddle by an island in the middle of the lake. If you approach the island on the south side you'll notice it's quite flat and open with a nice flat sloping rock landing. Could this be an old abandon site or just the perfect bail out spot? We'd soon find out.

After a bit of paddling on Caribou and further confirmation that our chances of finding a site on this lake are slim, 9 o'clock rolls around along with a bunch of clouds.

Looks like we’re making this island work. We make landfall by 9:15 and promptly set up camp with a hurried pace. Sporadic thunderstorms were in the forecast that evening, and the sky is starting to confirm that. Just in the nick of time, and not 10 minutes after we make camp the sky opens up and we start getting rain. It’s about a quarter to ten, and we all surrender to our tents for an early night, but we’re on dry land and it could be worse. With plans to break camp early and head to Horseshoe, we close our eyes hoping for clear skies in the morning, and an open lake on Horseshoe. 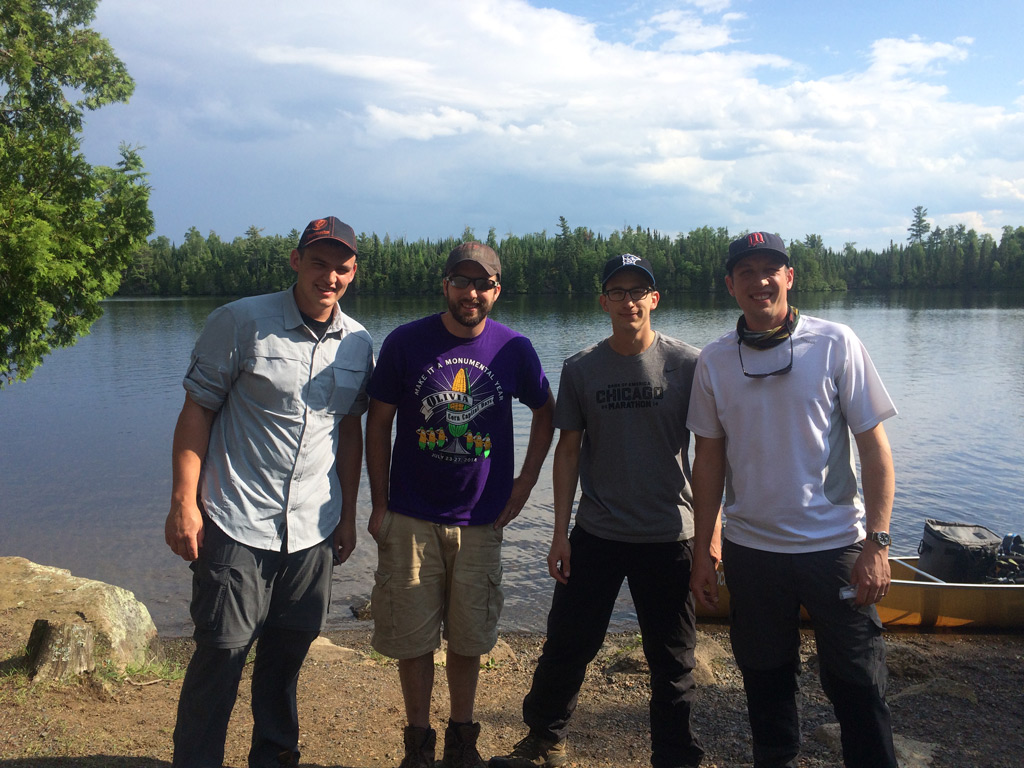 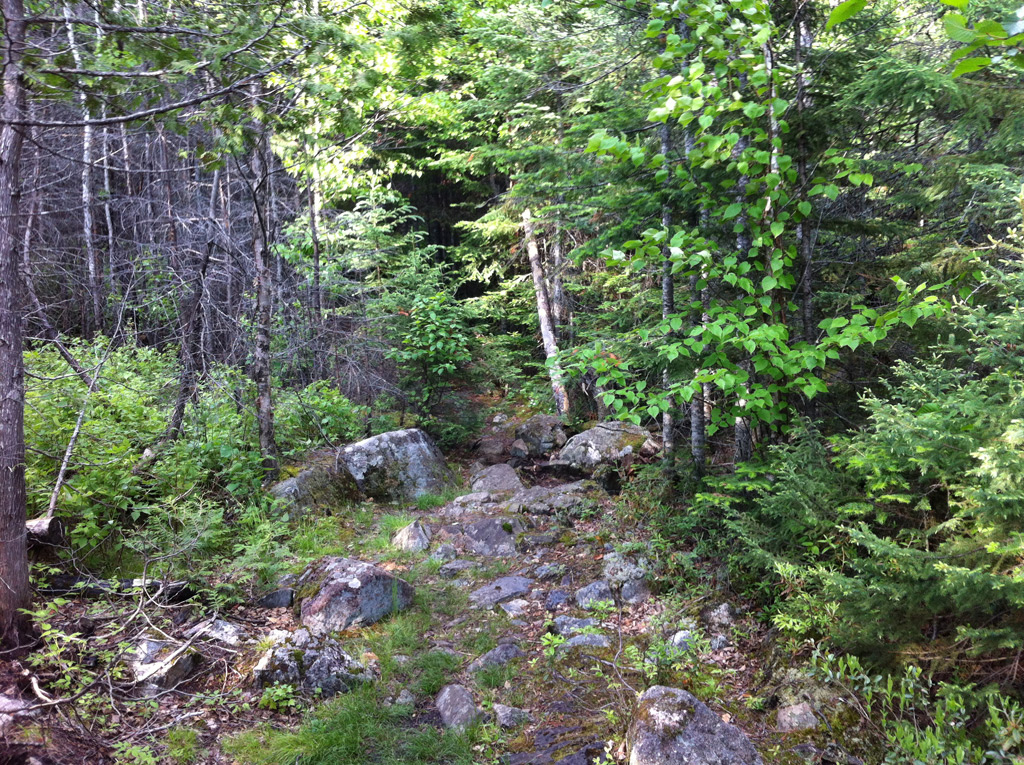 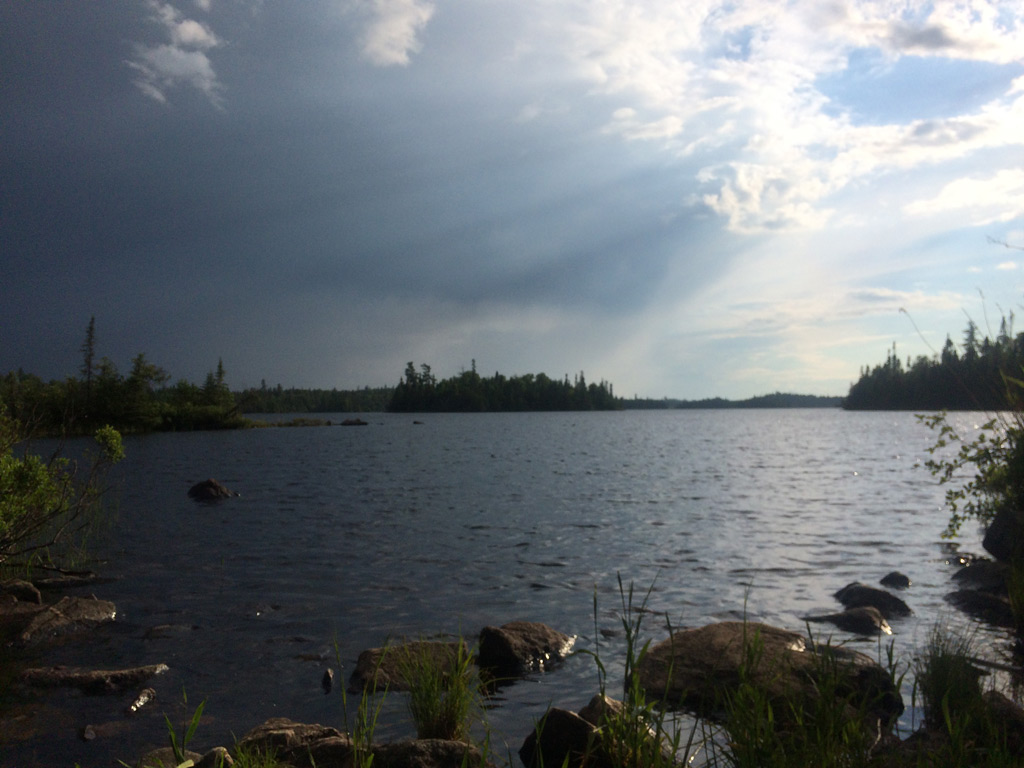 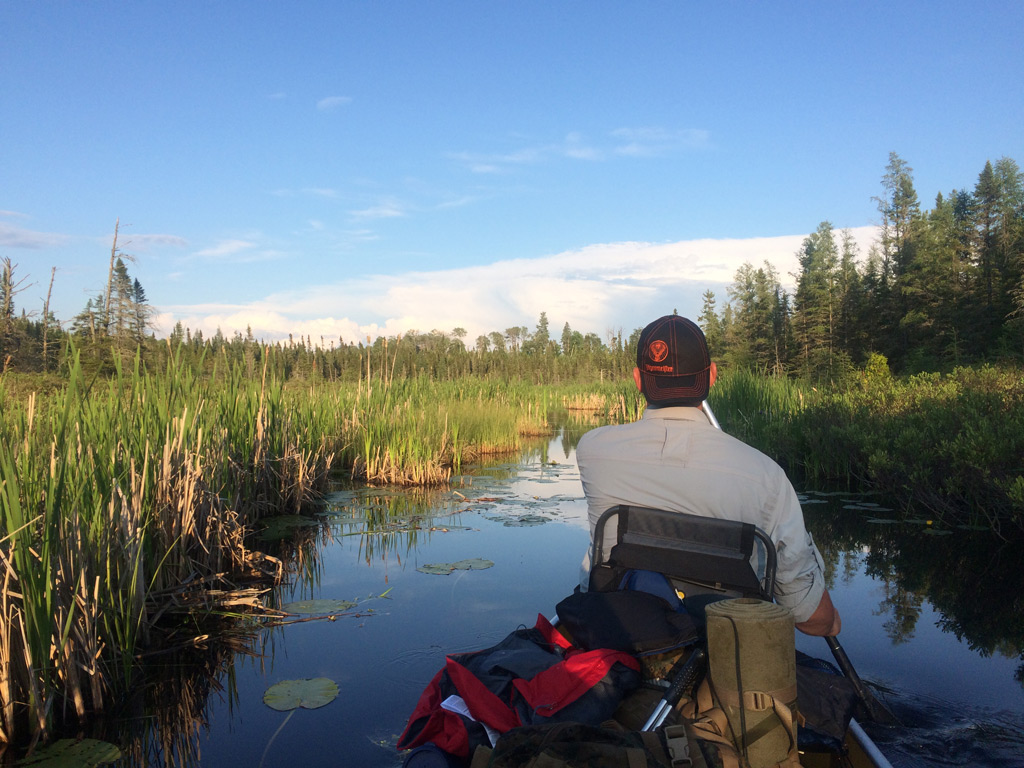 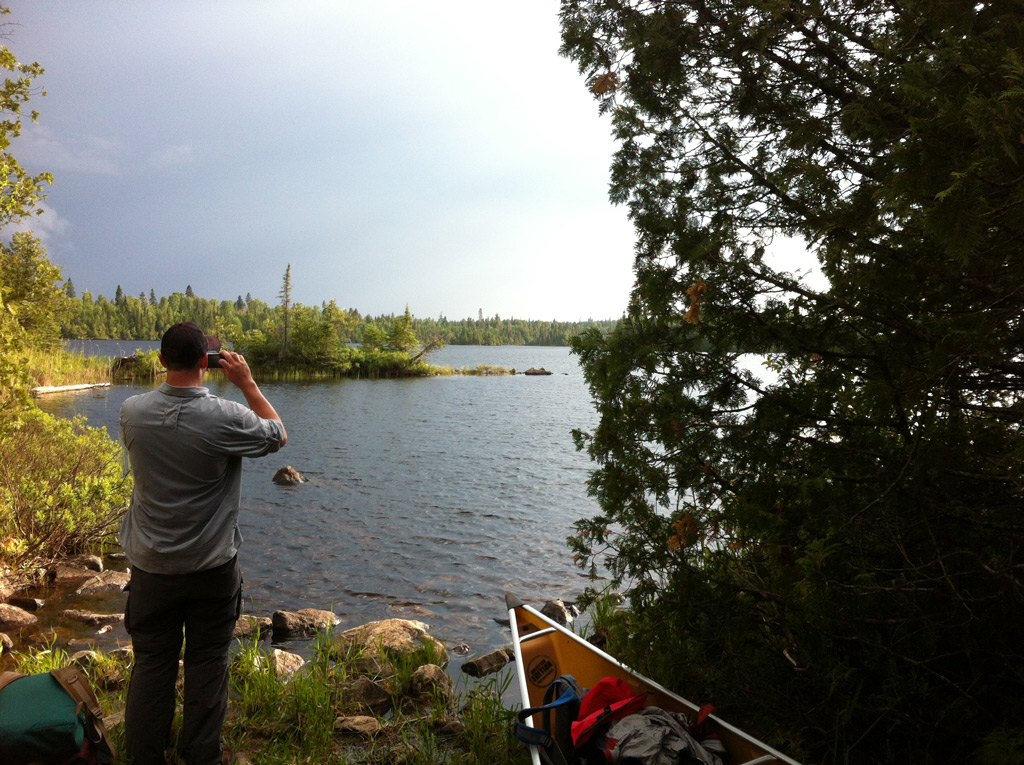