First Trip to the BWCA
by Gillcommander

Trip Type: Paddling Canoe
Entry Date: 06/13/2015
Entry & Exit Point: Snowbank Lake (EP 27)
Number of Days: 6
Group Size: 6
Trip Introduction:
“Would you be interested in a trip to the Boundary Waters?” That’s the question Rob, my friend from work, asked me on a Saturday morning in early February. I couldn’t get “YES” out of my mouth fast enough. I have been on several fishing trips in my life but the Boundary Waters was always on my list of places to fish. Over the last 4-5 years I had especially fell in love with fishing in Northern Minnesota. Where I live in Michigan I am close to some great walleye fisheries but I have become very jealous of the great walleye fishing Minnesota has to offer. My wife and I have made a few trips the last couple of winters to Lake of the Woods ice fishing out of Arnesens Rocky Point Resort. We weren’t able to go this year as she was busy going to college and we couldn’t make any dates work for a trip. So, when the opportunity presented itself I was excited to say the least. So now the planning begins. Luckily for me Rob had been coming to the BWCA for over fifteen years. He and his group usually made it to the Ely area every two years and between them most had 6-8 trips under their belt. Even more lucky for me is they had canoe camping down to a science so all I had to do was tag along and enjoy myself. That definitely didn’t slow me down as I researched everything I could about the area, the fishing, the lakes we would be visiting, and canoe camping in general. Like any newbie I am sure I went completely overboard on packing fishing gear that I didn’t need. But hey I was going to primarily fish so I wanted to be prepared for anything. Rob told me all I needed was a few slip bobbers, hooks, sinkers, a couple different lures, and as many leeches as I could carry. I should have believed him but of course I didn’t. Throughout the trip leeches far and away out produced every other method we tried. My future trips will result in less fishing tackle for sure. Anticipation and excitement leading up to the trip was almost too much to handle. Finally the day came and we were ready to leave. We left home in Michigan around 4:30 heading north where we would cross “Big Mac” at the straits between Lake Michigan and Huron before heading across Michigan’s own version of wilderness the Upper Penninsula. We made good time and hit Munising just a little before dark where we were lucky to catch a great sunset reflecting over Pictured Rocks on the south shore of Superior. Traveling thru the night wasn’t too bad but we were all tired when we rolled into Ely around 4:30 in the morning. We grabbed a spot in the parking lot across the street from Britton’s Café. We were waiting for three other members of the group who were meeting us from the Chicago area. Our plan was to have a nice breakfast, stock up on some things in town, then head up to Williams & Hall Outfitters on Moose Lake. I learned it gets daylight early in Northern Minnesota and we were at the door when they opened at 6am. We were easily entertained by a few young locals who obviously had a pretty late night. I don’t think they had been to bed yet and were hoping to soak up some alcohol from the night before. Two minutes after setting down Rob’s phone rang. The other members were 10 miles south of town and had just hit a deer that ultimately ended up totaling a Nissan Pathfinder. Our plans for the morning were about to change since Rob’s vehicle wasn’t large enough for 6 guys and all the gear. The tow truck drive dropped them off at Mike’s Automotive in town where we met them and headed back to Briton’s for breakfast plus to hash out a plan. We were hoping to be on the water by 10am paddling across Snowbank towards Disappointment beating the wind before it kicked up and to get a good campsite but that was definitely out of the question now. Several ideas were kicked around from car rentals to Uhauls to multiple trip’s up to Williams & Hall in Rob’s car. I suggested stopping at an outfitter in town and seeing if they wouldn’t mind helping out a group in need by transporting the guys in the wrecked vehicle and their gear to Moose. This is where a huge “Thank You” goes out to Spirit of the Wilderness who came to the rescue. Hopefully you are reading this Steve! They were quick to help us out for a mere $30 fee. The decision on where to buy bait, a few extra trip necessities, and some hats and t-shirts just got easier.
Discuss Trip: View Discussion Thread (13 messages)
Day 1 of 6
Saturday, June 13, 2015

Finally we were heading up to Moose Lake to get checked in at Williams and Hall. Blayne got us all checked in and soon the canoes were loaded heading for the parking lot/launch at Snowbank. I was starting to get a little nervous as this was the first time I had ever been in a canoe. Everything was loaded and soon we were heading east across the lake towards the portage to Disappointment. The wind wasn’t bad at all and it was a relatively easy paddle. I found my “canoe balance” early and felt comfortable the entire week. Pulling up to the portage it was quickly decided that two of the more experienced in the group would bust their butts across the portage and head for two of the desired campsites on Disappointment while the rest of us, including myself the newbie, would catch up later.

Here is where things got interesting and I received my baptism to portaging in the BWCA. I made the mistake of volunteering to carry the food pack and the canoe at the same time. Now one by themself would not be an issue. But having never done either alone the two together was way too much for this guy. I made it about halfway before having to drop the canoe thus having to come back to get it. Rob and the other members of the group are proud to make single portages so I felt like I was getting off on the wrong foot. I thought I was in a little better shape than I that but found out quick I better work on my cardio before the next trip. In the end it wasn’t that big of a deal but I was a little nervous as to how the rest of the week was going to go portaging to different lakes they had in mind.

After three long months it was nice to finally be on Disappointment. Rob had wanted the island campsite but it was unavailable. Fortunately the first site on the south side of the lake was and it definitely is a nice one. Plenty of room for three tents, lots of open space, a nice campfire setup, two nice tree layouts for hammocks, and room enough for everyone to have a seat. We were originally planning on staying here for 3 nights but later in the week decided to basecamp in this spot for the remainder of the trip as fishing improved. We quickly set up camp and gathered water for the purification system so everyone could top of their drinks. Then it was time to hit the lake.

Entertainment around the campsite was provided by an extremely friendly snowshoe hare. He would hang around all week and was absolutely fearless.

After reading Quetico Mike’s Zulu fishing article I couldn’t wait to give the elastomer plastics a try. I had been telling Rob for the past few weeks that I had the secret bait and I was going to kill the smallies on it. While waiting for everyone to get their gear ready I waded out to just above my ankles in my muck boots which proved to make everyone jealous for the week. I casted out the Zman Jerkshadz in Pearl White and caught a few smallies before leaving the campsite. One being a nice 2 pounder. That first afternoon the sun was high in the sky so we mainly fished smallmouths. I was impressed with the Zman soft plastic easily landing over 15 bass including a few nice ones over 3 pounds. Rob tossed a Floating Rapala and his results were nowhere close. Ironically it was the only time we fished strictly for bass the entire trip as the longer we were there we were able to narrow in on the walleye and we both love to walleye fish. I would highly recommend the bait to anyone heading into the BWCA and will for sure pack them again as I think the smallies would provide lots of action if other species were slow.

The first night we managed to catch 3 nice walleyes that we put on the stringer for the next nights fish fry. We probably could have done a little better but got a late start after cooking steaks on the grill. It felt good to hit the tent that night since it had been a long day and I hardly got any sleep driving thru the night to get to Ely. 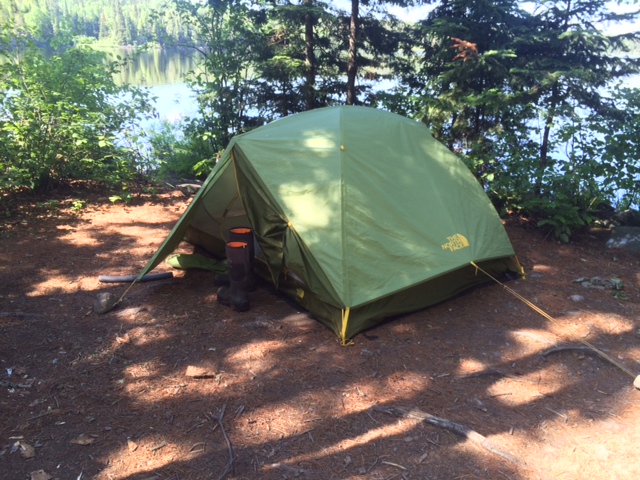 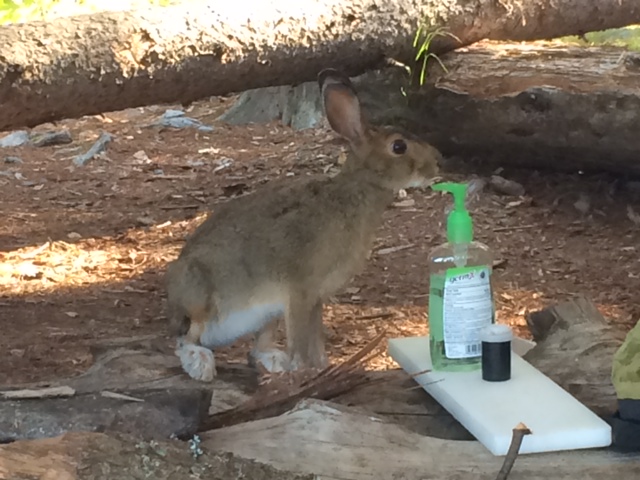