We departed from the Tofte AmericInn at around 5:30am. We were heading toward Grand Marais for breakfast at South of the Border Cafe. This place has been our destination for every trip up the Gunflint over the last few years. We filled our bellies and fueled up for the day. 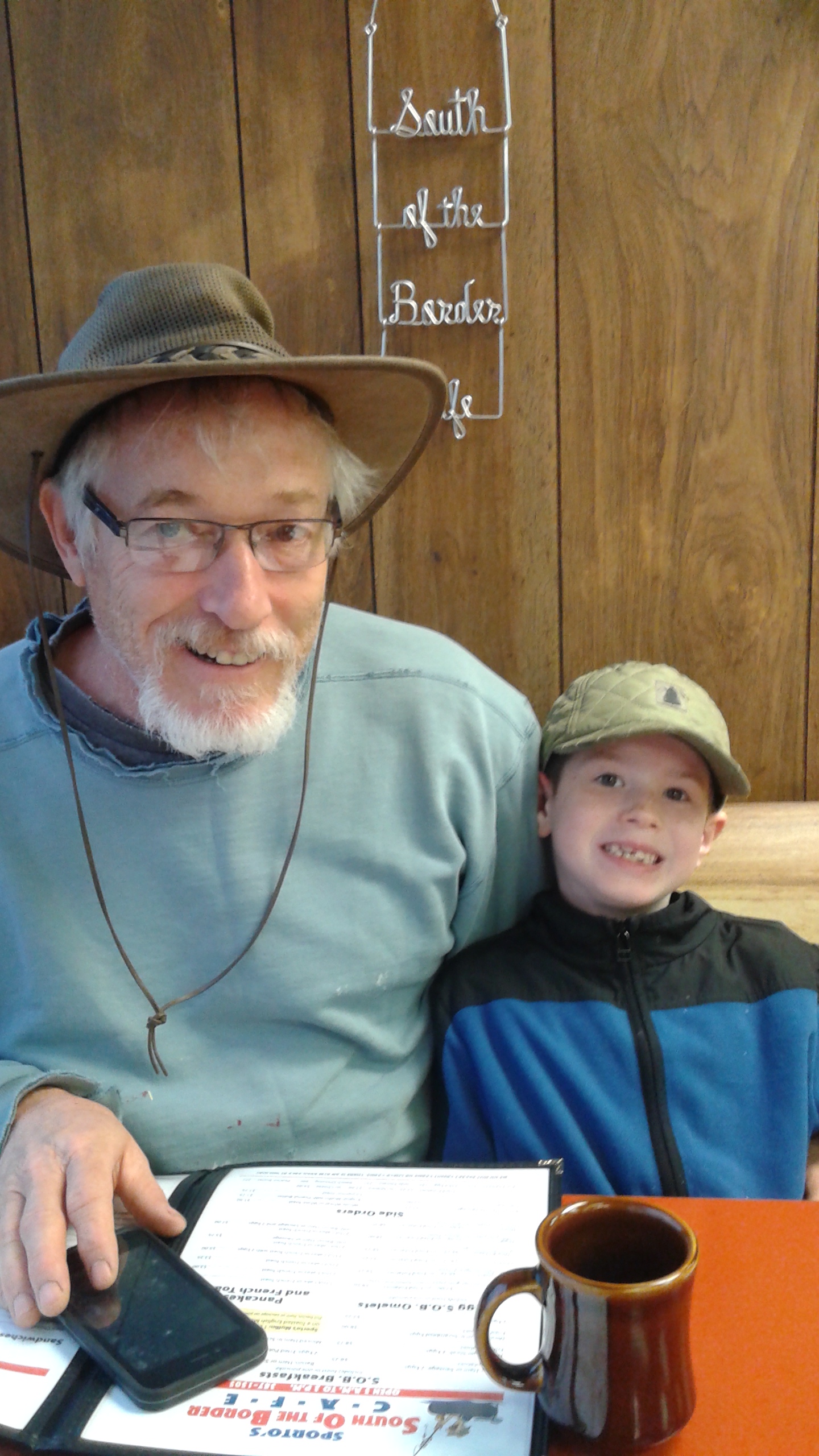 This trip our group of 6 consisted of: Myself, Dad, Cooper, George, Mike, and Shaun. Dad and George have both made many trips. Cooper is my 6 year old, making his first trip. Mike and his son Shaun are tripping with us for the first time as well. When we planned out this trip, we knew we would be bringing little boys, so we picked a short and easy journey to get the boys introduced to the BWCA. After breakfast, we headed up the Gunflint Trail, which ended up being an hour and twenty minute drive. We unpacked the vehicles and loaded the canoes into Larch Creek. It's amazing how narrow the first stretch of the creek is. We were glad the water was running high, because that cannot be a fun stretch in low water. We still had 5 beaver dams to jump on our way to the lake, but we were well on our way! 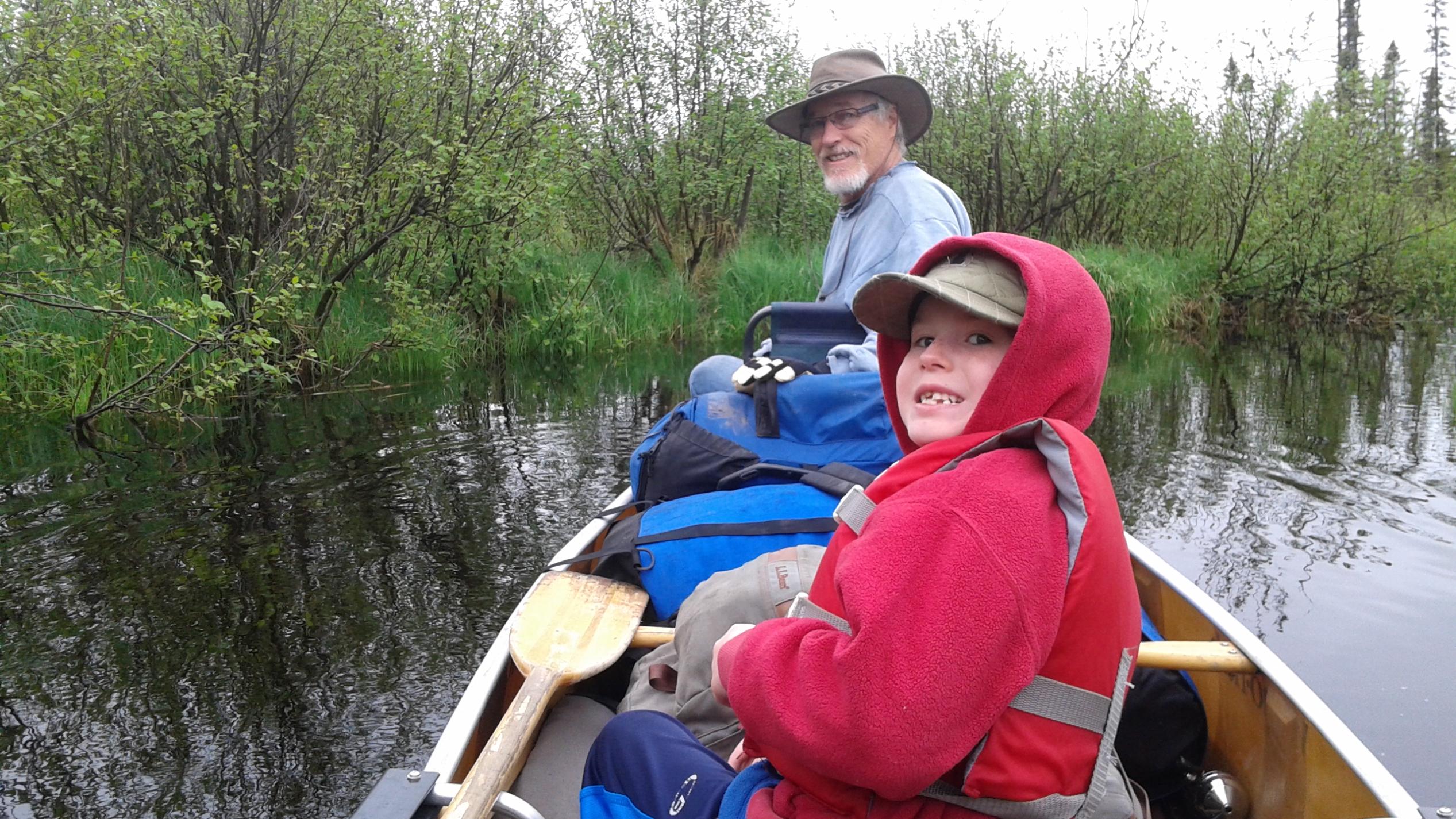 This is the first time any of us had been in a burn area. It was cool to see how much of the rocky hills and walls you could see with the forest height so short. We spotted the first campsite to the south and saw it was occupied. With the threat of rain, we had decided to check out all the sites on Larch to shorten our travels. We headed toward the island site and upon inspection, declared this our home for the next 4 days. This was a perfect site for the boys, with so much wide open space for them to explore and play. The canoe landings were all rock, but they were never too slippery during our comings and goings. We then set out to find the latrine, only to find it way up the hill very far from the campsite. The bugs had been terrible since we got out of the vehicles at the entry point, but this site seemed like it would catch the wind pretty good and keep the bugs at bay. They were however, terrible in the woods the entirety of our trip! We started setting up our camp, with ample choices of where to put the tents up. This site would be perfect for a large group with multiple tents. We also found many trees where we could successfully hang the food packs. We got camp all setup and decided to do a little fishing before we ate some lunch. Dad, Cooper, and I headed for the shallows to the west behind our camp. In a half an hour we caught 17 northerns throwing spinnerbaits in the shallow, lily pad filled waters. Now, that we knew they were biting, we headed out to see if we could find some walleyes. It took us a while to find any kind of depth on the main lake. After doing some exploring, Dad starting casting a twistertail on a jig and quickly caught two very nice walleyes![paragraph break] 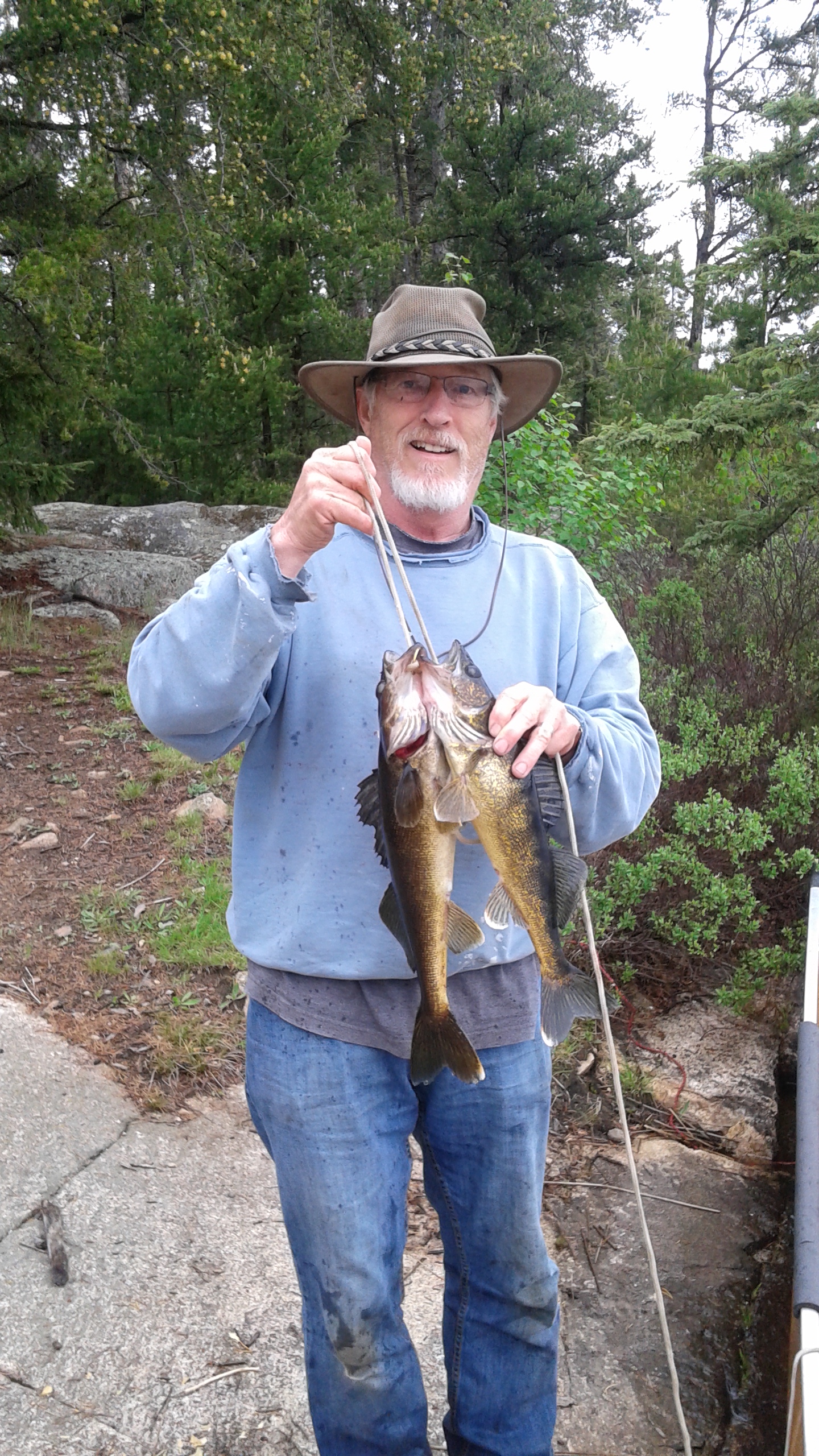 We decided to stringer the two walleyes for meals tomorrow. We had lunch and dinner planned today, but I had heard that the walleyes aren't too easy to come by on Larch. We went about finding dry firewood so we could cook up our brats for lunch. Everyone enjoyed cooking their brats over the fire. The menu chosen for this trip was a little more kid-friendly. Cooper wolfed down his lunch and was ready to go back out in the canoe! 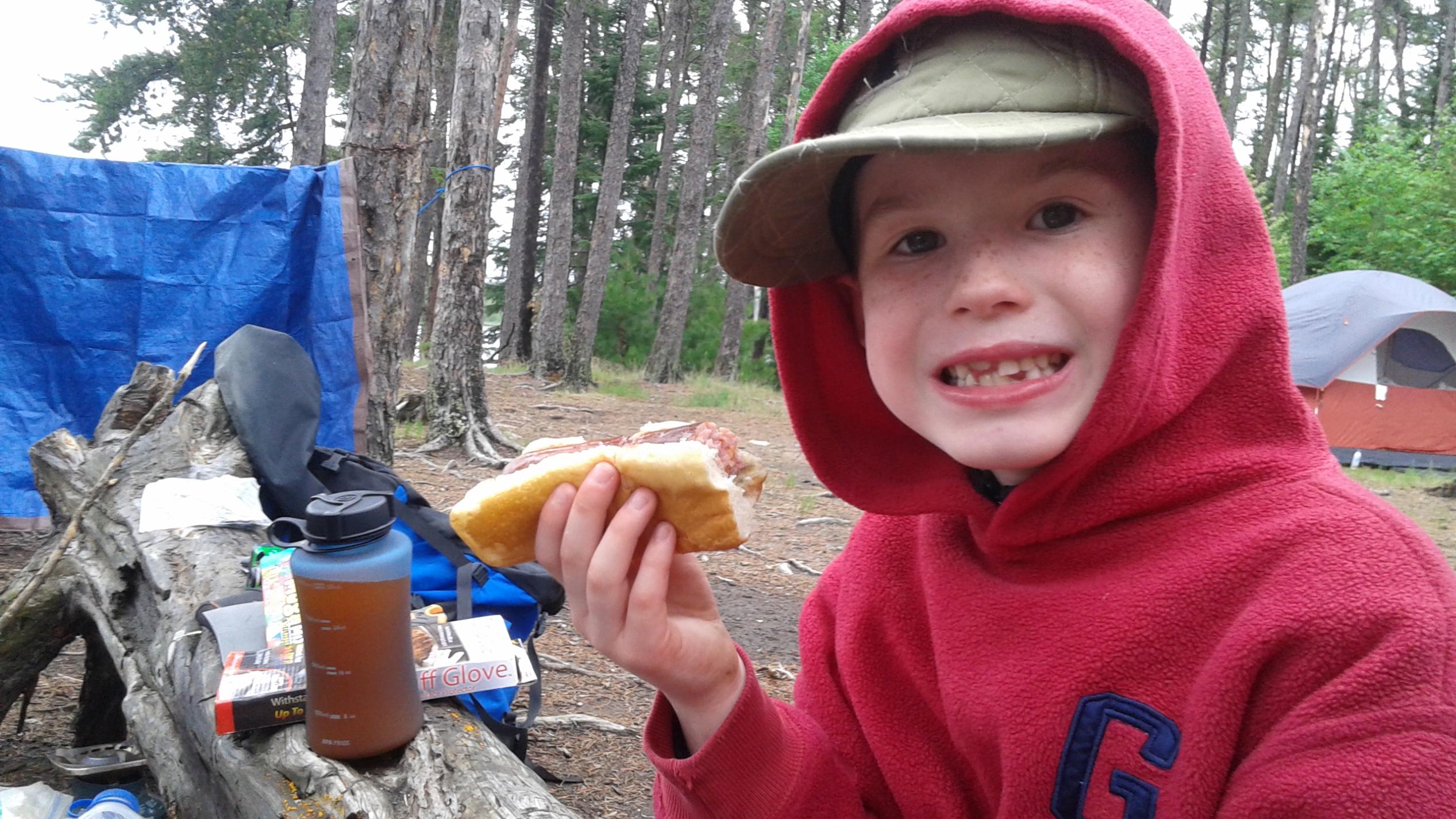 As we tidied up camp, the rain started falling gently, but we were excited to get back out fishing. Fishing was a little slower, but soon we looked to the north shore and Dad asked what was in the water. Upon further inspection, it was a mother moose with two little ones. We connected with George, Mike, and Shaun, and they had seen the moose for quite some time, working their way down the shoreline. We didn't last too long, as the rain continued to be a bother. I convinced Cooper to take a rest in the tent, as he was nodding off while we were out fishing. 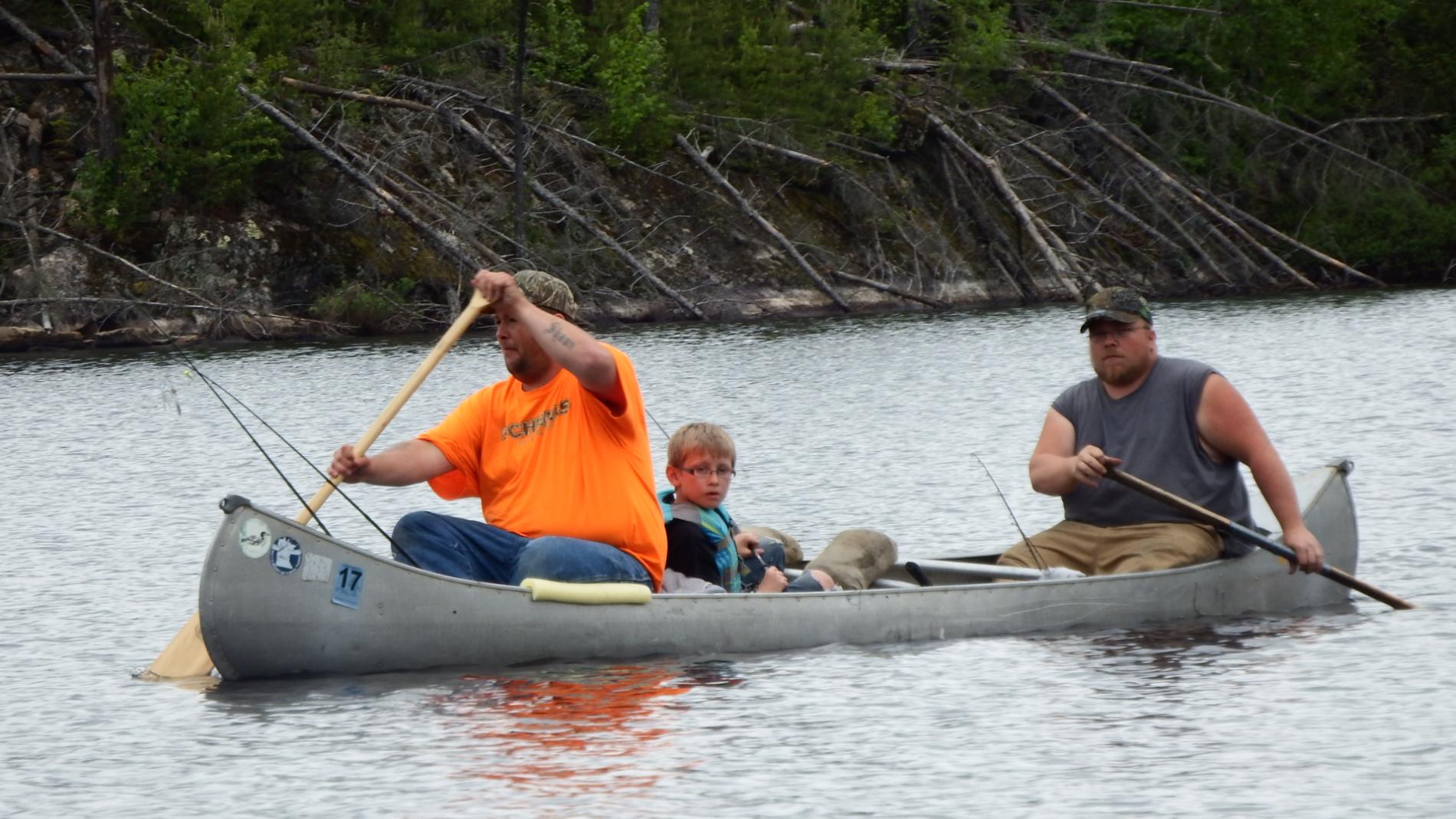 George and Dad went out in the canoe to do some more exploratory fishing. The rest of us stayed on the island and rigged up to do some shore fishing. I rigged up a slip bobber and put on a leech. It wasn't too long before I noticed my bobber was no where to be found. I pulled in another nice walleye. Our third of the day! Later we got a picture of the three we had on the stringers. 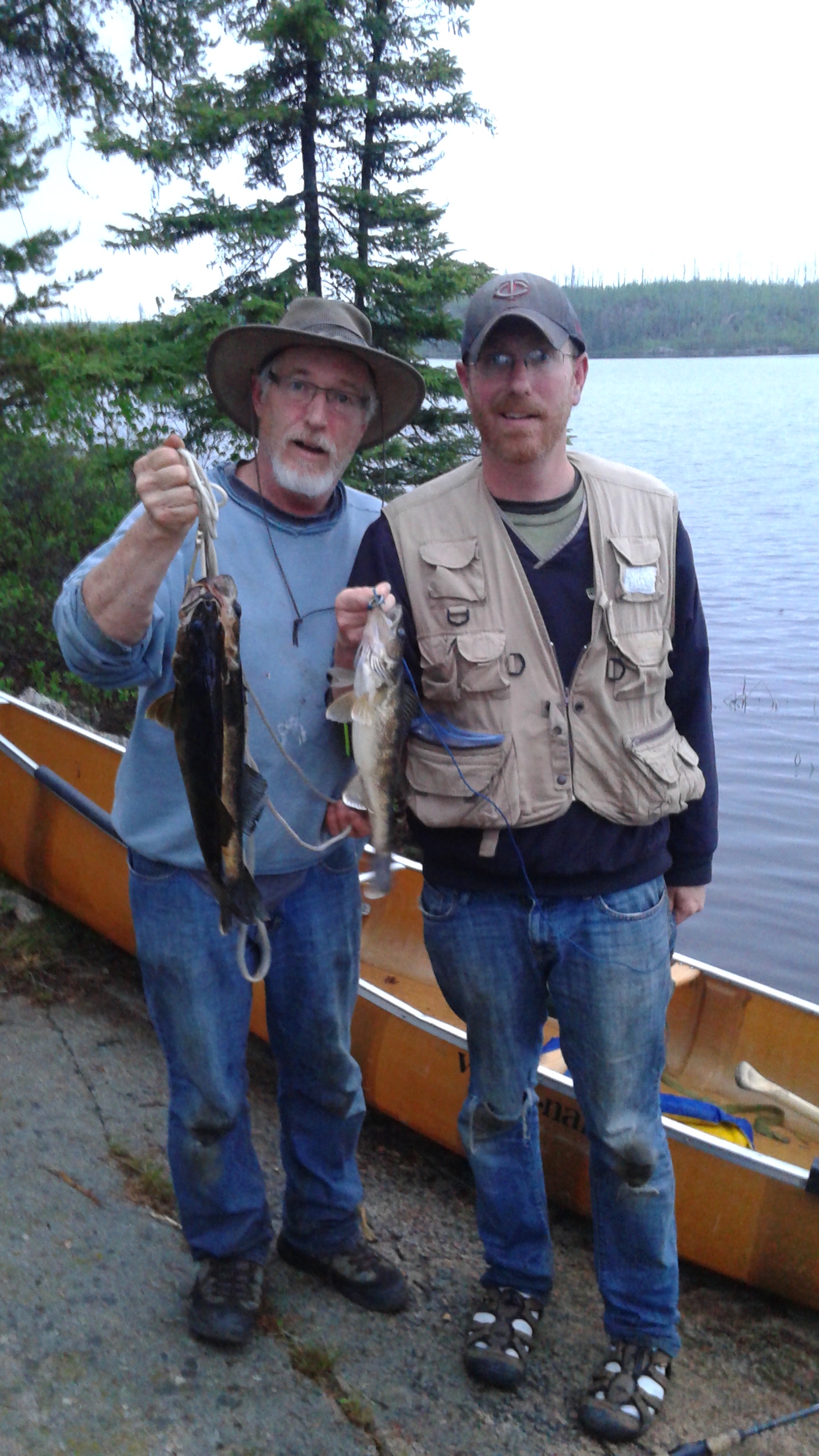 Mike, Shaun, and I continued to fish and explore the area, when Dad and George notified us of another moose on the western shoreline! I grabbed my nice camera and snapped a few pictures of a mother moose with a single baby. That was 5 moose in one day! 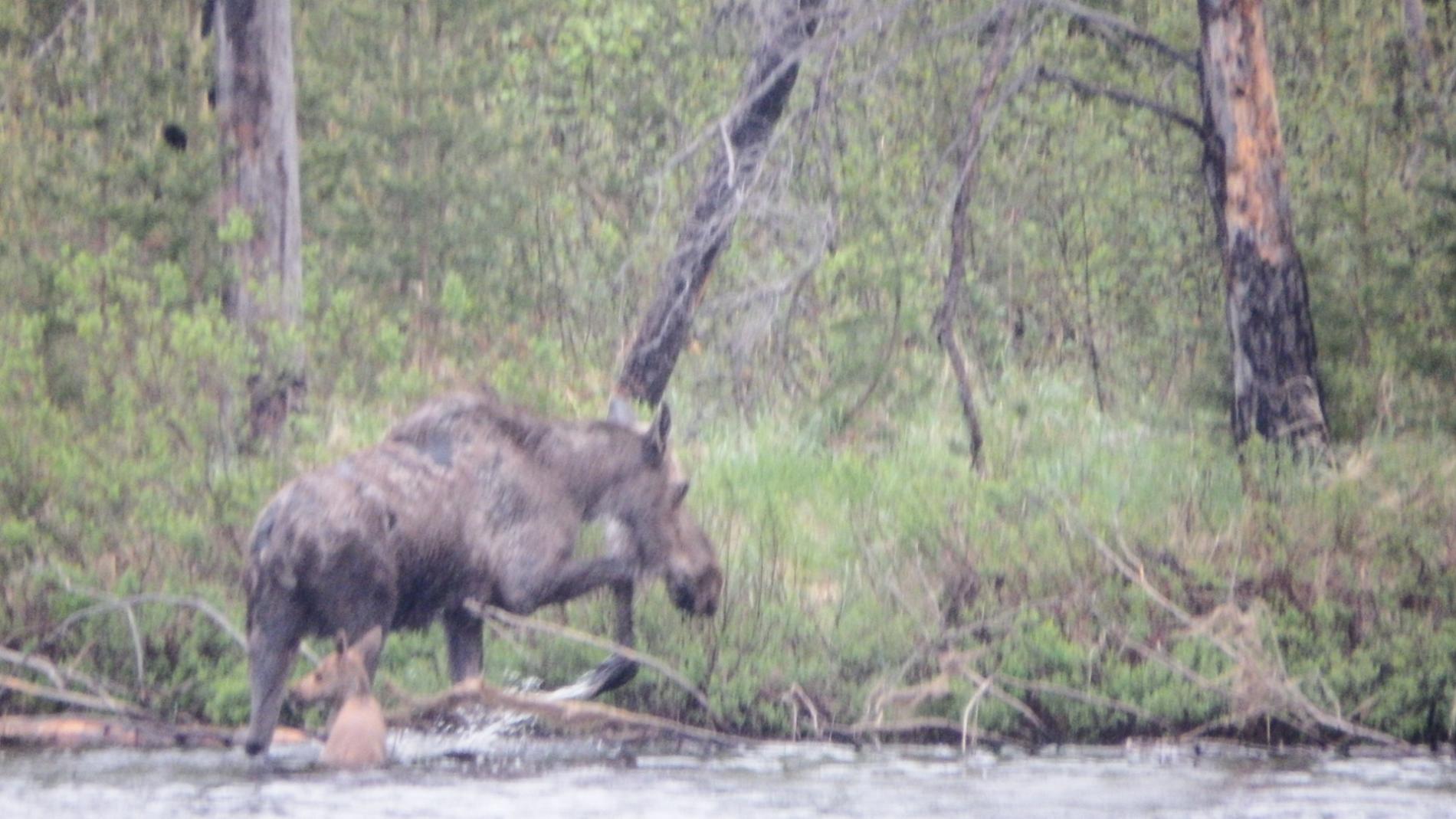 We finally decided to start some dinner. No one was really too hungry yet for the feast we were going to prepare. We always bring in steaks to cook over the campfire the first night. Dad and George had wrangled up some nice dead cedar while they were out fishing. I also brought in some green pepper and mushrooms to saute up with our steaks. Dad cooked up the impressive pile of steaks, while the rest of us worked on the rest of dinner. 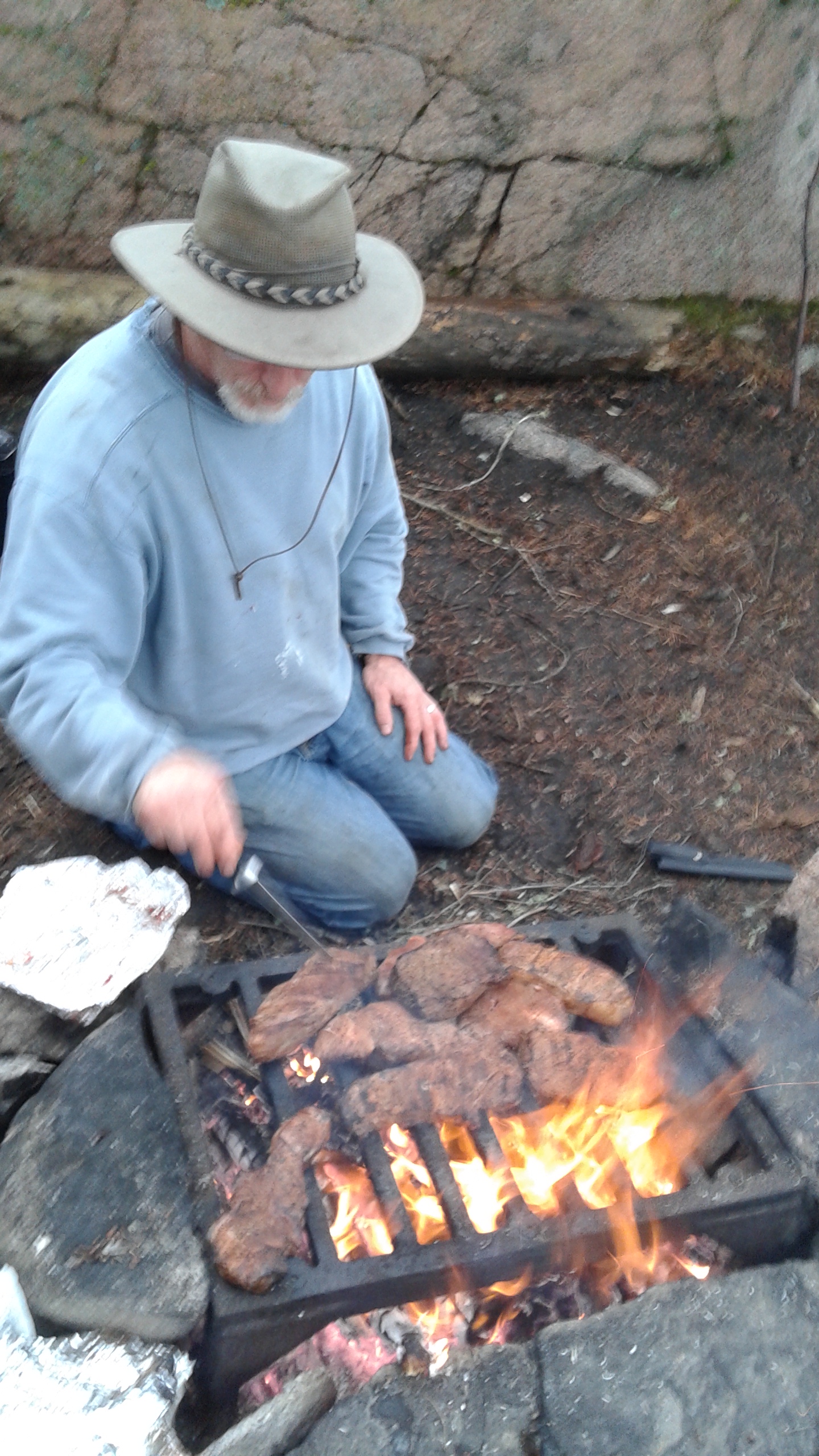 Dinner and cleanup was pretty late, so there wasn't much done after that, other than some hot chocolate around the fire. Then, it was off to bed.